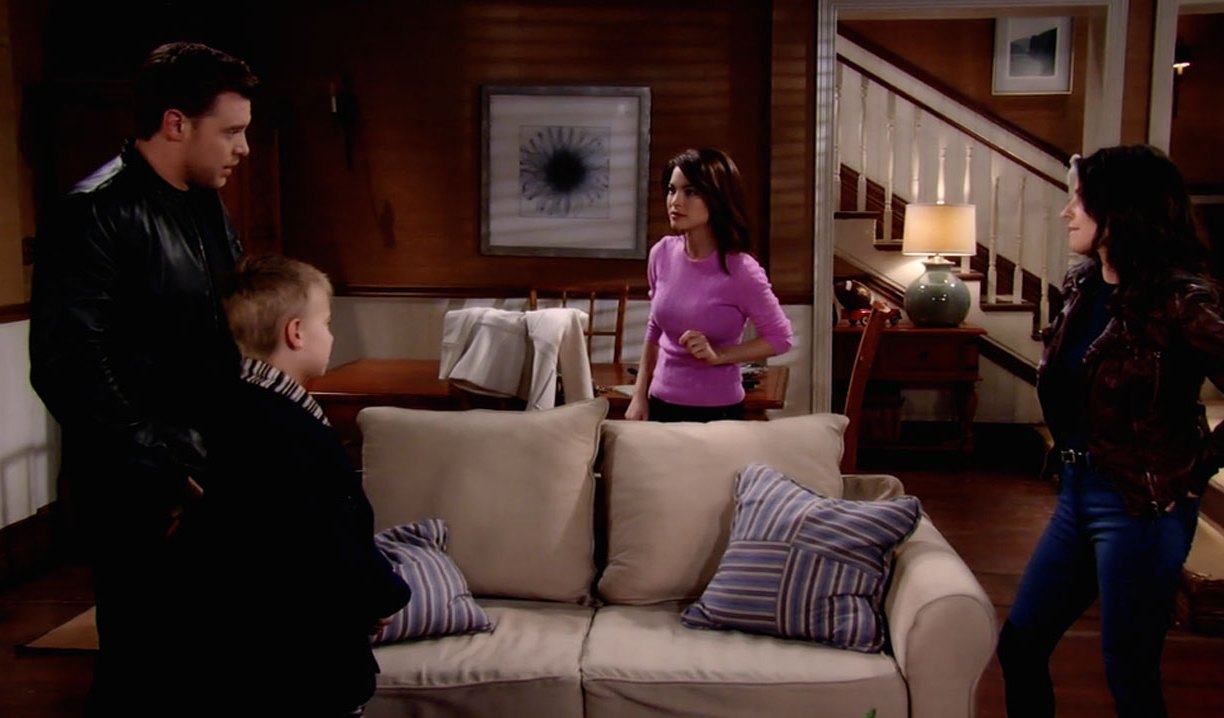 The week started off exciting with the Lulu and Valerie drama, but quickly hit a wall due to Olivia’s legal trouble and Liz and Sam’s eight millionth fight.

The killer is inside the house!
It is looking like the problems at Liz’s are due to little Jake being a deeply troubled child, though I still wish it was a ghost. Sam missed the mark when she accused Liz of terrorizing her own house, but I’m starting to wonder if Liz suspects it’s her own son doing this. How could she not given all the things he has said to her? While an evil little child always makes for a good story, I do wish they’d speed it up, as it’s so obvious what is going on so there is no surprise left when the truth comes out. Unless Jake eventually does something shocking that is.

I remember you.
Friday finally gave Jason and Sam fans a glimmer of hope, as he remembered not just a memory, but the way he felt with Sam. Will this mean they will reunite soon? I don’t think so, as I think he will find himself torn between Sam and Liz. The show isn’t going to end this triangle anytime soon, even though fans may want them to.

So long Johnny.
It appears Johnny is up the river once again, as Nathan caught him before he could get away. Johnny then ratted himself out to save Lulu from any legal troubles. It’s too bad the show can’t work some of that “only on a soap” writing magic to keep him around full time, and he’s a great character and actor.

Fortunately Valerie and Dante both figured out that Lulu was working with Johnny. I loved when Dante told Lulu that her pal took the fall for her and clearly had more integrity than she does. Ouch! I can’t believe I enjoyed watching Lulu’s downfall as much as I did, as I had always been on her side up until her collaborating with Johnny to take her cousin down. While it was Johnny who went too far, Lulu isn’t blameless. Still, I did feel for Lulu when Dante revealed he wanted a divorce, as it obviously crushed her.

Kristina’s story just got juicy.
In last week’s Deconstructing GH I gave Kristina’s story an F, as her flunking out of school just seemed boring. This week we found out it seems she has an inappropriate relationship with one of her professors. Now this is definitely more interesting. It would seem that Kristina is sleeping with him, but hopefully it’s something even juicier.

Shipping Anna and Andre.
Even though Jordan and Andre are dating, I’m just not feeling chemistry between them. Anna and Andre on the other hand heat up the screen, whether they are doctor and patient or secret agents tracking down Carlos and Sabrina. Jordan and Curtis have that magical spark she lacks with Andre, though we still don’t know the extent of their relationship. We know he’s TJ’s uncle, but that doesn’t mean he’s her brother. Given he knows Shawn didn’t shoot Hayden, I would hope he’s not Shawn’s brother, as he’s leaving him to rot in jail. He’s likely Jordan’s brother-in-law, which makes him fair game for a romance.

Political and social activist Olivia.
The topic of breast-feeding is definitely an important one, I just don’t know if it belongs on a daytime soap. Had it just been confined to the few episodes this week, to make a point about this issue, that would be one thing. However Alexis is turning Olivia’s incident with the mayor into a full-fledged lawsuit, and Nina is planning to run with it in the next issue of Crimson. It appears this whole thing is going to be a major storyline. The only storyline I want involving Mayor Lomax is the one where the truth that she isn’t the mayor comes out! We asked readers what they thought about the storyline, and they either loved it or hated it.

@soapoperafan @BlueWizard75 just like everything #gh is doing lately a *bust*! soooo bored with #gh right now everything feels contrived!

What is Hayden’s end game?
Hayden clearly knows Nikolas had her shot, but it appears she’s desperate not to do anything with the information. It would seem she really does love him, but Tracy’s blackmail is still looming. I’m not sure what her plan is anymore. If she marries him, which Nikolas is now proposing, it would have to be under her fake name, and thus the marriage would be invalid. So what is she after? This storyline is killing me, but in a good way. I adore Hayden and Nikolas. I just wish we could get Spencer, who has been at sleepovers forever, back in the mix.

As always, these are just my opinions on the show. Feel free to leave your own in the comments.