Deconstructing GH: A wedding, fond memories, and a house creeper 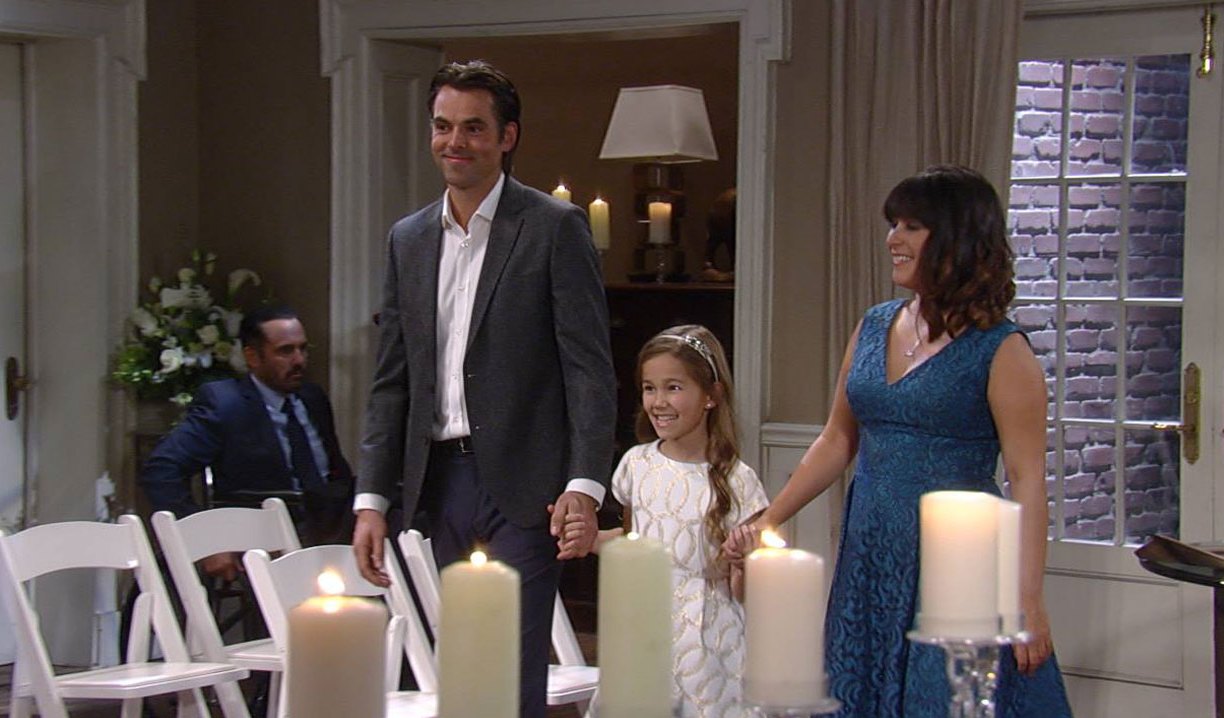 Port Charles said goodbye to some fan favorites this week, and a creepy new storyline began.

A happily ever after in Port Charles?
Most of the week was dominated, and rightly so, by the Scorpio-Drake reunion, wedding and sendoff. It seems so odd to see a couple get a happily ever after on a soap, but they got theirs and deserved it. The wedding was elegant and small, a nice change from the usual over the top dramatic weddings on daytime. Robin and Patrick already had that once anyways. The flashbacks of the couple over the years were a great treat as well. I’m still heartbroken that they took Emma with them, and hope she returns often to visit Anna. One viewer had an interesting suggestion to the send off of the smallest Scorpio-Drake.

Hayden’s past.
While Hayden continues taking her sweet time getting her revenge on Nikolas, an impatient Tracy dropped the bomb that she knew Hayden wasn’t who she claimed to be. Hayden is an alias, and her past is apparently very scandalous. Hayden’s become one of my favorite new characters next to Nina, so I’m dying to find out what she’s hiding. I also want to know her plan for Nikolas, as Friday had her proposing marriage to the Prince!

Embracing the suck.
The Crimson storyline is one of my favorites right now, as I am really enjoying seeing Nina, Maxie and Dillon all have a purpose. They also make a great team. It seems ludicrous that the publisher would have printed the magazine with green ink smears on every page, which means Julian purposefully did it to sink the magazine. How have they not figured out what Julian is up to? I really want to see them stick it to him and make the magazine a huge success even more now.

Merry Christmas, here’s a creepy gift!
Can we talk about the absurd giant photo that Olivia gave Julian for Christmas of the two of them and Leo in their matching sweaters? It was so over the top, but I loved it and couldn’t stop laughing at it. The look on Alexis’ face said it all about the photo. Olivia definitely had her own look of shock when she found out that Alexis and Julian are engaged. Alexis better rush Julian to the altar before Olivia snatches him away.

Jason’s memories, or lack thereof.
In last week’s Deconstructing GH I discussed how Jason had a significant memory of Sam, but never bothered to tell her, and how annoying that aspect of his storyline is. This week he finally opened up to her about it, and the two grew closer. It seems like his memories are slowly coming back, but I like NuJason the way he is and don’t want to see him totally lost to his old self. I definitely don’t want to see him go back to Liz though, and I still feel like she’s not gotten any punishment for what she’s done other than being dumped by Jason. Everyone in town just seems to be forgiving her. I couldn’t believe Robin and Patrick just gave her a hug and well wishes after the stuff she’s pulled. Then on Friday, Laura did the same. What the heck is in the water in this town?

The call is coming from inside the house!
What on earth is going on with Liz’s house? Jake’s seeing people lurking about outside the windows, drawing scary pictures of the house, and by Friday it seemed someone had broken in. Is someone actually stalking the family? Or is it something else? I pondered what it could be on Twitter.

Jake could just be acting out due to his parents split and is he making all this up and terrorizing his own mother. That would be an interesting twist, though part of me thinks a haunted house storyline could be fun as well. “GH” is known for its ghosts after all. Helena brainwashing the kid, which most viewers expected to happen, has been done enough with others as is. Hopefully that isn’t what is going on. It’s 2016 so it’s time for some fresh ideas!

Stories from 2015 that we may never hear from again.
With it being a new year, I have to wonder about some of the stories from last year, and if they’ll ever get resolved.

– What were Brad and Rosalie hiding? Will Brad and Lucas ever get married?

– Will Felicia ever get to be mayor, or is she going to have to wait till the next election and try and not have it stolen from her again?

– Who is Nathan’s father?

– What secret do Madeline and Obrecht know about Nina?

As usual these are my opinions on the show. Please leave your own in the comments, whether you agree or disagree.

Wendy Williams Urges Tiffany Haddish To Be Careful With Common: He’s ‘Not Good With Women’