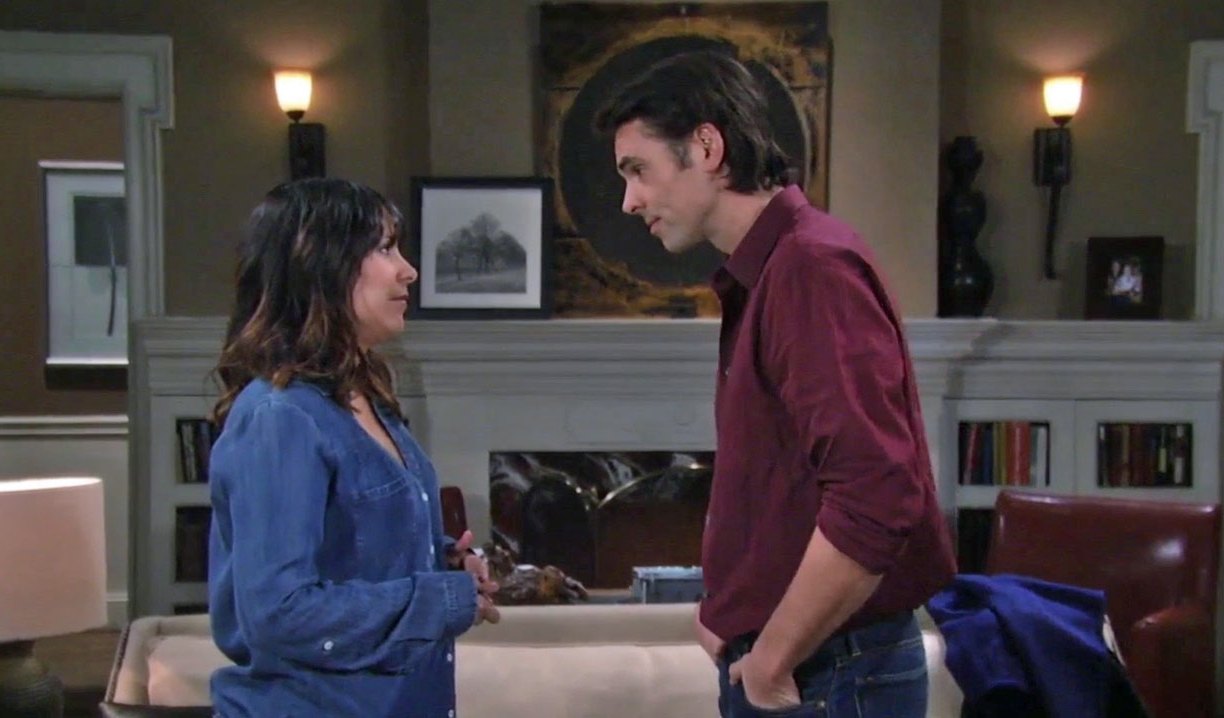 A proposal, love making, a health related miracle, and scorned lovers made up the New Year’s celebration in Port Charles.

Christmas in Port Charles.
I really enjoyed the Christmas episode, save for one part that I will get to. I loved seeing Kiki agree to tolerate Ava for her sister’s sake, but that she’s wise enough not to trust her mom. It was awesome that she also convinced Ava to let her take Avery to see Sonny. Patrick and company’s Christmas in Paris was really nice too, though I feel like Patrick jumped right back to Robin insanely quick, especially after all the speeches he gave to Sam about her not loving him as much as she loved Jason. Liz got a whole lot of nothing for Christmas, which was excellent. However what was the point of giving Jason the memory of giving Sam a necklace in the past if they didn’t follow up with it? I’m tired of hearing Jason say he has no memories of his past, when he constantly gets these flashes!

Sabrina is SOL.
In last week’s Deconstructing GH I was relieved that Sabrina finally told Michael the truth, but as I feared it cost her him. He told her that if she was honest from the start he could have looked past this, but she lied to him over and over. Still, I have a feeling these two will find a way to make it work. They will however have to deal with Carlos, who clearly won’t be walking away from Sabrina or his baby.

Nailing Paul.
Go Tracy go! Watching her kick Paul to the curb was fantastic, as was Dillon standing up for his mother and also cutting ties with Paul. Unfortunately in order to protect her and her family’s name she isn’t going to reveal his relationship with Ava, which could get him into hot water. Meanwhile, Mac and Anna are also hot on Paul’s trail and have figured out he killed Sloane and tried to pass his body off as Carlos. It’s just a matter of time before they connect him to Ava as well. I have been loving seeing Mac on our screens more and wish they’d get Felecia back on as well.

Headed for heartbreak.
I can’t help but feel sorry for Hayden. She seems to truly love Nikolas. She now has the proof that Shawn did not accidentally shoot her, but that someone else was clearly aiming for her. She knows deep down it was Nikolas, but what will she do with this information? We still don’t know what her end game is. Part of me can’t help but wonder if she even cares for him, or if that has been an act just like her amnesia was. That would be a nice twist, because right now they are setting her up for a big fall.

@BlueWizard75 for sure, what a fool ugh

No more cares to give for Morgan!
I just can’t invest in Morgan anymore at this point. I’ve gone from feeling sorry for him, to feeling frustrated by him, and back again. With his decision to disregard everything Sonny has told him and decide to get involved with his father’s business, I just don’t care about his character anymore. Honestly, I don’t know if many people would miss him if he became a casualty of Sonny’s business at this point.

Back in the day…

The old neighborhood.
Curtis and Jordan dropped more clues as to how they know one another, but haven’t filled the viewers in completely. We know they go back to a common neighborhood back in the day, and it seems they may have grown up together. Are they siblings? Cousins? Is he related to Shawn or Jordan’s husband? He called TJ his nephew, so it has to be one of those. All I know is I am enjoying them and can’t wait to see more. By Wednesday’s episode Curtis let it be known he used to be a cop in Baltimore where Franco was wanted for a period of time.

Ringing in the New Year.
Patrick and Robin celebrated the New Year by getting engaged, which was rather bold given he just broke one off. Then again, time is running out for Jason Thompson, who is headed off the show and over to “The Young and the Restless.” Franco bought Nina a necklace before they headed off to finally make love, though it appears the necklace may not have been legally purchased. Oh Franco, please don’t mess this up. Lulu and Johnny found themselves in a hot kiss, while Jason and Sam moved in for one but didn’t quite lock lips. Something tells me they won’t either. Finally, Sonny got a miracle when he was able to move his leg a little at midnight. All in all, a great New Year’s Eve episode.

As always, these are my opinions on the latest episodes. Please leave your own in the comments, and be sure to have a happy New Year.

Be sure to read Soaps.com’s Top 20 Christmases on Soaps.

IATSE Grips Local 80 Chief Thom Davis On Restarting Production: “There Is A Deep Understanding Of The Perils If We Don’t Get It Right”