Lulu realizes that she and Spinelli aren't safe after all.
Ric shows genuine concern for Alexis's condition.
Robin and Sonny remember their love for Stone.

Lulu and Spinelli are waiting to find out who has ordered that they be held hostage. Lorenzo enters the room and Lulu admits that she thought was going to be Sonny. Spinelli warns Lorenzo that if anything happens to him; Lorenzo's computer system will go all Shock & Awe and destruct. Lorenzo tells Lulu he's sorry that she's become involved in this situation. She tries to leave and he tells her it's not possible now. Lorenzo explains that he needs Spinelli to put certain computer safeguards in place before he can let them go. Lorenzo tells Lulu to stay calm and he'll try to figure out a way to let her go. Lulu gives her condolences to Lorenzo for Diego's death. 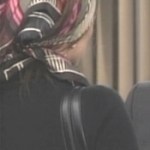 In Ric's office, Alexis is emotional and fumbling to try to get her scarf back on so that Ric won't see her balding head. She finally has to ask Ric for help. He gently helps her put the scarf back on, then tells her that she's in no condition to fight as hard as she'll need to in order to defend Sam. Ric says that his case against Sam is pretty tight. Alexis tells him that she's putting her personal differences with her daughter aside in order to see justice done. She says, Sam's behavior has been disgustingnot illegal.

At the hospital, Patrick learns from Epiphany that Robin has unexpectedly taken the rest of her shift off. Patrick explains that it could be because their patient arrested on the operating table, that's probably why she's upset. Epiphany says that they're all having a rough time, and tonight is no different. She goes on to tell Patrick that Liz called off sick and wonders if it has anything to do with the fact that Lucky is back at work. Guess who has come up to the nurse's desk and overheard? Maxi.

On the waterfront, Robin is looking out over the water, remembering the bridge where she and Stone used to spend time together. It's the anniversary of Stone's death and she's gone there to remember him. Low and behold, Sonny shows up as well. Together, they remember some good times that the three of them had. Robin tells Sonny that Stone told her to become a doctor and cure AIDS. A cloud comes over her face as she says that she hasn't done a good job as a doctor lately. Just ask Laura Spencerif she could talk, Robin says. Sonny asks Robin why she thinks Laura's relapse is her fault. Robin tells Sonny that the Spencers are grieving and it's because she gave them false hope. Sonny tells Robin that he was at the wedding, the whole family was happy. He asks her if Stone were to walk up to them right now and offer her one night with him, would she take it?

Stan and Jason are hot on Spinelli's trail. They've found snack wrappers and soda bottles at the surf shop. An old, gray surfer dude comes in and they hold him at gun point, until he tells what he knows: the geek and a cute young blonde thing took off in a car.

Ric goes into the interrogation room to talk to Sam. He tells her that if she loves Alexis as much as she claims to, she should get a different attorney. Sam doesn't buy that he actually cares about Alexis, but he tells her that doesn't want Molly to grow up with out a mother.

Georgie is covering for Maxi at the hospital and Dillon finds her there. She wants to know why he's looking for her. He tells her that she might get mad, but wants to know if Lulu is in her study group. He was right; Georgie is mad. She tells Dillon to stay out of whatever mess it is that Lulu has landed in.

At the PCPD, Lucky finds Detective Cruse to ask why he warned him not to trust Ric. But, Maxi accidentally runs into Lucky while on her way to visit Mac. She suggests that since they're both there, can they talk about their baby? Lucky lays into her for showing up at his parent's wedding uninvited. Liz goes to the PCPD and finds Lucky talking to Maxi. Lucky quickly tries to brush Maxi off, but Liz says that she knows they have to meet from time to time because of the baby. She's there to see Sam anyway. Just then, Georgie and Dillon come in to report Lulu as a missing person. Lucky thinks Lulu is just having a hard time dealing with the loss of their mother.

Spinelli thinks that Lorenzo will kill them, but Lulu explains that since she's tight with Skye, Lorenzo won't. Wake up, blonde one, Spinelli tells her. Lorenzo is a mobster, he won't care about warm and fuzzy feelings that the mother of his baby has for Lulu. But, Lulu isn't worried.

Jason has gone back to the art studio and his leg is bleeding. Elizabeth is back from the hospital, and is mad at him for re-injuring his wound. She tells him he should be glad he's too old for a time out. He's sorry that he never lives up to her expectations of him, then tells her it's probably good that he didn't turn out to the father of her baby. She just looks at him and keeps working on his bandages.

At the hospital, Patrick leaves Robin a voicemail and Sonny has walked up behind him and overheard. He tells Patrick that he just spent time with Robin, but he thinks Patrick should go to her instead.

Robin is having a flashback of the night Luke met her and Stone on the bridge with Bungi-jumping equipment (so that Stone could fulfill one of his dreams before he died.) Then, she remembers when she and Sonny stood on that same bridge and scattered Stone's ashes. Patrick joins her and brings her back into the moment. He tells her that their patient is out of ICU. She figures out that Sonny has sent him. Patrick tells her that he's there because he thought she might need him. She reaches for his hand and tells him that today is the anniversary of Stone's death. Patrick wonders if he's up to competing with a ghost. He tells Robin that today she is a brilliant doctor and researcher and from what he's heard, Stone was a street kid would might've grown up to deal black jack on Luke's boat. Patrick asks Robin if she really thinks that she would still be with Stone if he hadn't died. Robin says Stone was cheated out of his life, so we'll never know. And, so was Laura. Patrick asks Robin what happened to her optimism. She says that she's burnt out on failure. She's done giving patients false hope. He asks how he managed to fall in love with her right before she had a crisis of faith. She tells him he can still back out, but he says he's not going to give up on her. Robin leans up to his chest and together they look out over the water.

Sonny's gone home and is hanging out with Michael and Morgan. He tells them that they remind him how happy he is to be alive. Skye interrupts them and tells Sonny that she has something to say that will affect both their families. Sonny sends the boys upstairs so that he can talk with Skye. She tells him that Lorenzo has promised that he won't seek revenge for the death of Diego. She asks Sonny for the sake of all of their children to keep the peace. Sonny reminds her that Lorenzo always breaks his promises. 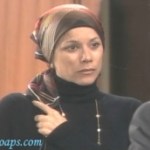 Alexis brings Kristina to the hospital and runs into Ric as he's talking to her oncologist. The doctor tells Alexis to relax, that Ric is only asking him about her dizzy spells. Ric turns to Alexis and tells her to accept that she has stage 2 cancer. Is it really worth sacrificing your life just to beat me? he asks her.

While Elizabeth was visiting Sam, she took her a cell phone to use to call Jason with. Back at the art studio, Jason's phone rings and he is surprised that Sam is calling him. She explains that she would get in big trouble if busted with a phone, but she had to call. Jason promises that he's going to get her out of there and then, they exchange I love yous.

Lorenzo visits Spinelli and Lulu and tells them that he can't let them go tonight. Lulu protests by saying that people will start to worry. Lorenzo apologizes, and says he'll make them as comfortable as possible. After he leaves, Lulu gives Spinelli an I told you so. But he's busy rigging up some kind of intercom that he's been working on ever since Lulu sat back and declared they were safe. Through it, they hear Lorenzo give a command, Skye can never know the girl was involved. Kill them both and make it look like an accident.

NEXT ON GH:
Lorenzo pulls a bottle of booze out and tells his captives, Drink up, this will all be over soon.
Sam asks Alexis what the chances are that they can win her case.
Sonny goes to Lorenzo and tells him if he wants a war, he's got on.

There's a lot of begging going on.

Nikolas Finds His Own Kind of Acceptance.