There's chemistry everywhere today. Robin has to face her fears of loving. Tracy and Luke have the best talk of their marriage. And then there's the "little" thing between Jason and Sam.

Luke tells Tracy that he was going to tell her in private about his plans to marry Laura. She tells him that he'd better book a trip to the Dominican Republic then, for their divorce.

Robin yells at Patrick for telling her that he loves her. She tells him that he doesn't even know the meaning of the word. She tells him that he's immature, self-involved and incapable of making a commitment to her. Why would he just blurt something like that out now, in the middle of the hospital? She walks away and tells him to never use that word on her again. It doesn't apply to them.

Jax and Carly are making out on Sonny's couch, but Carly pulls away. She feels weird because Michael could come downstairs at any minute. Jax suggests that Michael and Sonny are working together to stop their wedding. Carly agrees that Michael wants the wedding stopped for his own reasons, but Sonny is simply territorial. He doesn't want her back; he just doesn't want anyone else to have her. Sonny was right, after all, when he warned her not to marry Lorenzo. But she quickly reassures Jax that it's different with him. She's not just marrying him as a reaction to Sonny.

At the Haunted Star, Tracy forces herself into the Spencer family discussion. She contends that lying to Laura is a mistake. Tracy says that since every member of her family knows the truth, how long will it be before it all backfires? Nikolas agrees with Tracy. Bobby says that since it's so soon, they should agree with what Patrick and Robin say for now. Luke says he wants to talk to Tracy alone and she agrees, but only if he calls her by her married name. Mrs. Luke Spencer.

Carly is upset that Jax let Sonny bait him at poker. She wasn't thrilled that they were betting cars, hotels, etc. He tells her that Sonny is a worthy opponent, it was just in fun. She's worried that they were gambling over her -- in a sense. He schmoozed her out of it. Just as they started making out again, she gets a call from the hotel warning her that her personal pass key was just used to key into room 824. She says that she gave it to her old girlfriend from Florida and not to worry, she'll be right there. Jax says he never heard of that friend as she tears out of the door.

Alone at last, Tracy is still slurping down the cocktails and is bitter and angry with Luke for agreeing to marry Laura again especially so soon. She asks him if he was simply afraid to say no because she would go spiraling back into madness or if he's still in love with her. (She is angrily yelling this like an accusation at this point.) Luke said he had moved on with his life before Laura woke up. He tells her that their marriage is unlikely, but it suits him. She questions Why wouldn't it? She reminds him that his daughter is getting a college education, he can do whatever he wants, and he comes home to maid service and good booze. He corrects her and says that he's married to her (not all that stuff). He said he is surprised that they are such a good fit, but they are. He says he'd be married to her if she didn't have a dime. She says, That would thrill me to the quick if you didn't just promise to marry Laura. He says he had to go for the long shot that was offered by the doctors. He asks her if she could bear to tell Laura the truth. She said she could, if it meant keeping her husband.

Drawing the blinds in Room 824 at Carly's hotel, Sam and Jason settle into their temporary safe house. Jason assures Sam that he doesn't think Skye will call the cops on them. They have the Quartermaines in common, at least. They agree to clean up and get some rest for tonight. Tomorrow, they can run. He gives her a nice kiss and takes off for the shower. She sits on the sofa and flashes back to holding the baby.

At home, Robin is fuming and pouring a glass of wine for herself and her roommates. She's spewing with the details of the high risk AIDS procedures Patrick takes on just because he needs the rush. She says that since her viral load is low and she insists on using all the right precautions, she's boring to him. She tells Kelly and Lainey that Patrick proclaimed his love for her. They don't see the problem. She says, The problemis that I'm completely in love with him.

Skye and Lorenzo relax after the baby quiets down again. She tells him that she enjoys spending time with him, in spite of herself. She can't help but to wonder what the tradeoff is for her and the baby's safety. If he's so powerful, how in the world can he keep her safe? She wishes he was a dentist. He moves in for a kiss and reminds her that she would've never slept with a dentist. After a nice kiss, she pulls away and says she needs to get the baby home. Lorenzo understands, but looks forward to the day when they call his place home.

Sam freaks out and draws a gun when she sees the doorknob turn. Carly comes through the door and is upset that Sam is about to shoot her. Carly has brought a bunch of cash and a first aid kit and is willing to help them get away.

Robin, who has calmed down, wonders why she stomped all over Patrick the first time he tries to express love for her. She says she'll be surprised if he ever talks to her again. Lainey asks the million dollar question. Why isn't it okay for Patrick to say that he loves you? Robin explains that she's loved twice in her life and they both ended badly. First came Stone, who died of Aids. Then was, Jason, who loves living close to the edge of danger. Robin declares that she can't live that way, and Patrick dares danger just as much as Jason did, only inside of the operation room. She fears that one day he'll gamble too much and will completely fall apart like his dad did. She doesn't think she can take it. They hear a great song and Robin remembers that she and Patrick like it too. Kelly notices the song is coming from the window and calls Robin over to it. Patrick, a boom box and a bunch of roses are waiting below.

Carly rushes back into Sonny's living room where Jax is waiting for her. She makes up some story about chatting with her old friend too long. Jax says that the only person she'd lie to him about is Jason. He guesses that Sam and Jason are hiding out in style at the Metro Court. She tells him that she loves him and that Jason is the deal breaker. If Jax can't understand that she will always help Jason, maybe they shouldn't get married. All Jax wants is honesty. If she wants to help Jason, she should help Jason. Just let him know.

At the Metro Court, Jason is wondering if the cops followed Carly. They agree they should get some sleep and Sam apologizes for freezing up while holding the baby. Jason remembers that her baby died two years ago tomorrow. He remembers how helpless he felt when the baby died. She told him that he was her reason for getting better.

Robin comes downstairs to see Patrick, and the neighbor is yelling for him to turn down the music. Patrick does, and then tells her to listen. He tells her that he loves her and has for a long time. He doesn't even know when it started. Maybe during the epidemic, maybe when she saw him through his father's transplant. Maybe it was when he was stuck with the HIV needle. In any case, he says that he needs her and admires her. She drives him crazy a lot of the time, but he loves her, completely. He just wanted her to know.

Back at the Haunted Star, Luke tells Tracy that he feels like an acrobat who walks over Niagara Falls without a net. He has to go very carefully, step by step. He doesn't want to slip and have anyone fall a long way down. She admits that Laura coming back is a miracle. She says that Luke and Laura never made much sense to her. She knows that everyone thinks Laura rescued him (all those years ago) and made him better, but she didn't see it that way. From her point of view, Laura tried to make him someone that he was never going to be. She strapped him with kids, tried to settle him down. He told Tracy that he had no idea she paid that much attention. Tracy says that Laura should've stayed with Scotty Baldwin and had 2 kids, done charity work at the hospital, etc. She contends that Luke needed (and still needs) someone more complex. He says that magic is magic. Tracy gently tells him that magic is illusion and that he needs to prepare himself for when reality sets in. She walks away.

Curled up on the couch, Jason and Sam are still talking about her little girl. They remember that she would be talking and walking by now. Sam imagines how great Jason would've been with her. Jason says that he's not good at picturing things, but he's sure she would've been happy. He's just glad that Sam didn't run off back then, she stayed and changed his life. Even though they are fugitives at the moment, they agree that they are okay as long as they have each other. She lays her head on his shoulder.

A stunned Robin admits that she's afraid to love again. She doesn't know how to love just a little bit. She admits that she rationalizes and tells herself that she likes him and then picks a fight when she feels in too deep. He reminds her that she also lectures a lot. She puts the flowers down and tells him that she's done hiding from love. Here goes, she sighs. I think that you are amazing and brilliant. And you're also really funny and charming. And you're my best friend. I love you. He chokes, I've known that for a long time, but it's nice to hear.

Ric knows that Sam's baby died 2 years ago and is counting on her to visit the grave.

Mac tells Jax that he knows Carly has a personal guest staying in the hotel. He wants to search the room. 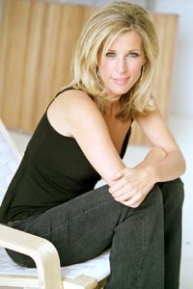