After Jason and Sam slip away from Ric and Rodriquez during a shootout, Ric screams at Rodriquez and asks him whose side he's on.

At the Haunted Star, Sonny and Jax are playing poker. Sonny doesn't have enough chips, so he pulls out the keys to his car. He tells Carly to move a little closer so that he can see her better. Carly steps right up close to his face (and body) and tells him that win or lose, the one thing he won't get tonightis her.

Patrick tells Robin he wants to keep gambling, namely a game of strip poker back at his place. They roll the dice one more time to seal the deal. Either way, they agree to play in every room of his apartment. But, Patrick gets called back to the hospital.

Emily bets today's date and wins. She explains to Nikolas that it's the numbers of his b-day, which is today, and it's a very significant number to her.

Lorenzo tells Skye that he can't suddenly transform into a nice, safe accountant just because he had a daughter. However, he told her that hope springs eternal that she will love him again.

In their room at the Bed & Breakfast, after Laura proposes to Luke, he tells her Hold on there Sleeping Beauty. He explains that she just woke up from a 4 year snooze; she shouldn't make decisions like that right away. Laura says that it may have been 4 years, but for her, it was like yesterday and she still feels the same way. He explains that he still feels the same way, too. She asked him how he handled the 4 years. He told her that for a while he was a permanent fixture at whatever facility she was in. Then, after getting bad news over and over again, he became only a visitor. He said he needed to talk to her and touch her, whether she was coming back or not. She says that she must have known he was there, because that's the way they've always been. That's way getting married again doesn't feel like rushing into anything, she tells him. They agree that they are each other's destiny. He says he wants to Happily, hopefully and most gratefully.marry you. She is very happy and jumps up to hug him.

Just when Sonny wins the hand to Jax and he has to pay up big time, Michael calls Carly and tells her that he doesn't feel well.

Luke is without a cigar to celebrate their new engagement, but Laura asked where her engagement ring is. He made up some bogus story about hospital security and she wisely told him, You threw it away, didn't you? He agreed that he had been frustrated and angry. He told her that just 2 years ago on her b-day, he brought her another one in the hospital room. He tells her that it's still back at the house in the music box that she loves so much. She wants him to hot-wire the car so they can go back and get it. Or call Sonny for a jet, she suggests. He tells her he could never deny her anything; he's certainly not going to start now.

Jason and Sam make it to Alcazar's house, quiet not to arouse the nanny and the baby upstairs. They are looking to see if Lorenzo created the flash drive, so Sam starts by looking at the computer. They hide when they hear Lorenzo and Skye return. From behind the couch, they see Lorenzo notice that his computer wasn't in the same position as he left it and picks up the phone.

Back at their house in Port Charles, Luke goes upstairs to get the ring and Laura looks at old photos. When Luke comes back down, Laura opens the music box, we hear a lovely song, and Laura loves the ring. He gets down on one knee but a Charlie horse made him sit next to her instead. He says, Laura my love, my hope, my life. I don't deserve it, but if you would do me the honor of being my wife, I promise to love, and protect you and be grateful every day for the rest of my life. He puts the ring on her finger and she gleefully tells him she would marry him again and again and again. Lulu comes in and catches them kissing. Laura tells her that her parents are going to get married again. Lulu looks at Luke and he just motions to her to keep quiet.

Carly decides that Michael doesn't really need her and Leticia can give him medicine. Sonny says he is going to check on his son, since Carly is staying out with Candy boy.

On the phone, Lorenzo asks how long Diego has been gone and tells whoever it is to keep the lookout. Skye brings the baby down to see her daddy. Lorenzo promises his baby that she will have a very different experience that her big brother has, with regards to her father. Sam and Jason are still lurking behind the couch.

Lulu says it's surreal that her parents are to marry again. Laura says that instead of flower girl (as she was to be 4 years ago), she wants her to be the maid-of-honor. Luke says he has to leave his women for girl time, and he has to have a meeting with his business partner at the Haunted Star. Sitting on the sofa, Laura tells Lulu that no young girl should have to grow up without a mom. She wants to know how she and Luke have gotten along through the years. Lulu tells her that it's been bumpy, but better lately. Laura explains that her father is a complicated man and that he has had a hard life. She tells her that Luke is capable of the most extraordinary kind of love and loyalty, and nothing means more to him than his family. They agree that they have 3 hard headsand that's better than one! The Spencers are going to be a family again, and it's going to stay like that.

At the hospital, Patrick (in a red surgical outfit for a change!) and Robin start to argue about what cases he takes because the person who needs surgery has AIDS. Robin doesn't want him to take unnecessary risks, and Patrick storms off to do the surgery.

Luke comes into the Haunted Star and announces that they are closing early tonight. He tells them all to get out, this isn't a drill. He grabs Nikolas as he's leaving and tells him to stay for a family meeting. (Luke isn't thrilled that Nikolas Cassidine is to be considered family, but that's the way it is.)

Carly comes home and Michael quickly lies down on Sonny's lap, and they both act like they are sleeping. Carly is concerned that he's still not feeling well and they all go upstairs to get some medicine. (Jax stays downstairs.)

Bobby, Nikolas, Lulu, Emily, Elizabeth and Lucky are all gathered at the Haunted Star. (Lucky got a pass from rehab). Luke tells them that Laura's recover is fragile at best, even though she seems perfectly fine. He explains that he's told her that there was a car accident and the brakes failed while she was driving. That's how she thinks Rick Webber died. Bobby doesn't think it's a good idea, but Luke explains that all doctors agree that she needs to be protected from the truth (that she killed him).

Laura is snoozing on the couch and wakes up, relieved, to see that her ring is still on her finger. When Lesley comes home, she's surprised to see the ring on her finger. She says that Luke needs to be more respectful of what she's been through and not rush her into things. Laura said that except for Rick not being there (because he's dead); the wedding will go forward just the way it was planned. Laura is saddened as she recounts the accident for her mother. She thinks she must've been driving Rick back to his hotel room when she crashed. She can't remember that part. They start to talk about the music box that Laura is still holding. It used to be Lesley's, and Laura loved it when she was little. It was in the attic for years. (Uh oh, why in the world did anyone say attic?) Laura seems reassured when Lesley tells her they should leave everything from that night in the past.

At Lorenzo's, Jason and Sam have a chance to check out the computer while Skye and Lorenzo go into the kitchen. But, the baby starts crying and Lorenzo and Skye are sure to hear her through the baby monitor that they put in her crib before they left. Sam goes over to the crib and tries to comfort the baby. In fact, she picks her up! Jason is enjoying looking at her cooing away, he needs to get busy on the computer!

When Sonny won't leave Jax and Carly to be alone, Jax tells Sonny that they need to make their transition easier for the boys. He agrees to leave the family room and go make his phone calls from his bedroom.

The Spencer family debates over Luke's plan for keeping Laura in the dark. Emily, who realizes she doesn't get a vote, says that Luke is right. Lucky, Lulu and Nikolas all agree, for now. Then, Luke announces that they will be remarried. But then, a very hurt Tracy (who has overheard that little tidbit), says that could be a problem since he is married to her.
Patrick and Robin have a heated discussion about her hounding him. Don't think that you can tell me what to do with my career just becauseI love you.

At home, Laura has a little flashback about Rick finding her in the attic, just before her wedding.

Robin tells Patrick that he doesn't love her.
Sam tells Jason she can't hold the baby anymore, and Skye walks in to see them.
Carly tells Jax never to be baited by Sonny again. 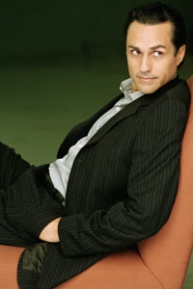 Jax and Carly make some waves.