Monday, January 23, 2023: Today on General Hospital, Cam learns Joss slept with Dex before breaking up with her, Sonny doesn't think Spencer is ready to be a parent, and Dante gives Heather a deadline. 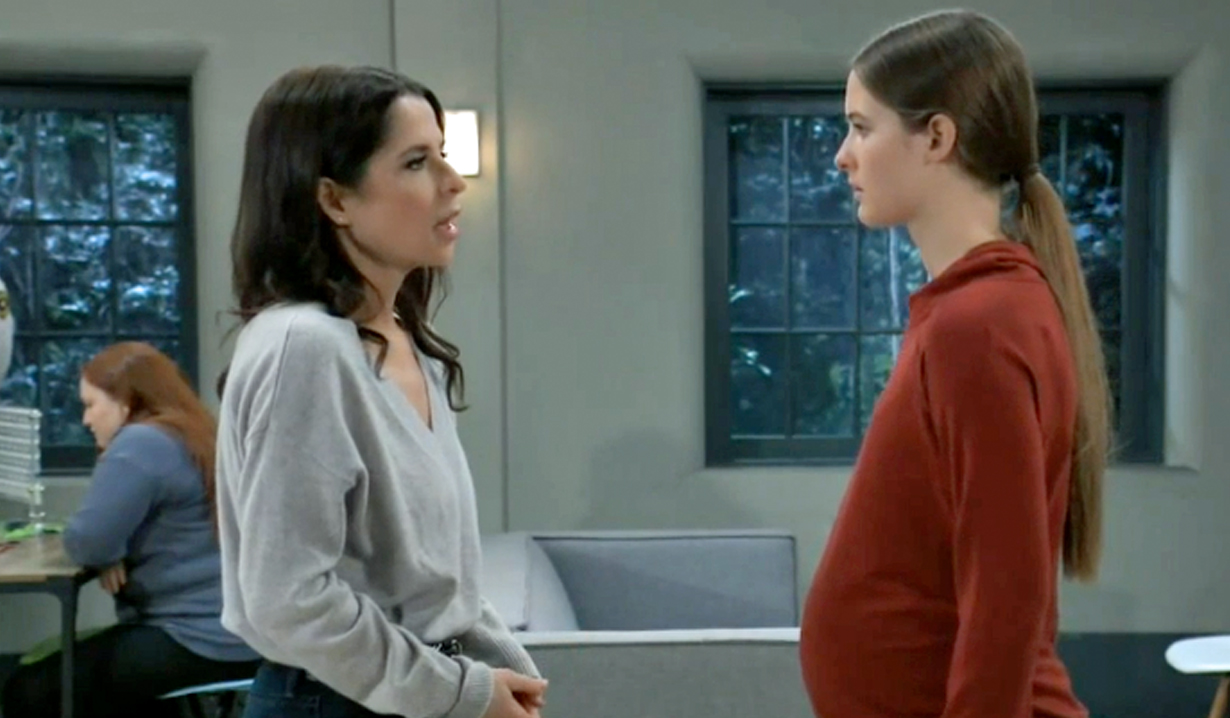 Laura drops by Wyndemere to find Nikolas going over his divorce papers. He explains that Ava is getting Spoon Island. Laura asks why he’d give up his home, and why Ava wants it. Nikolas thinks she wants it out of spite, but she’s also entitled to compensation. He thinks they both need a new start, and the new baby will be his. 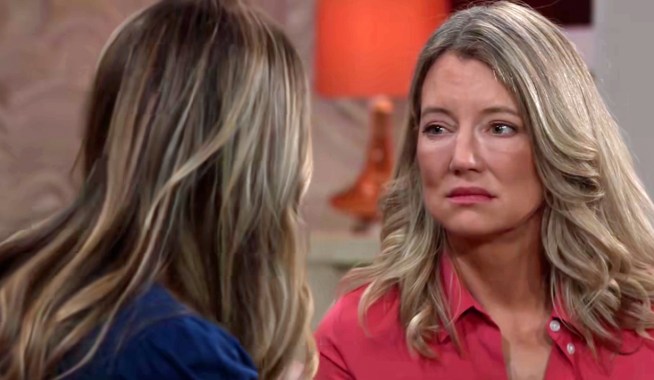 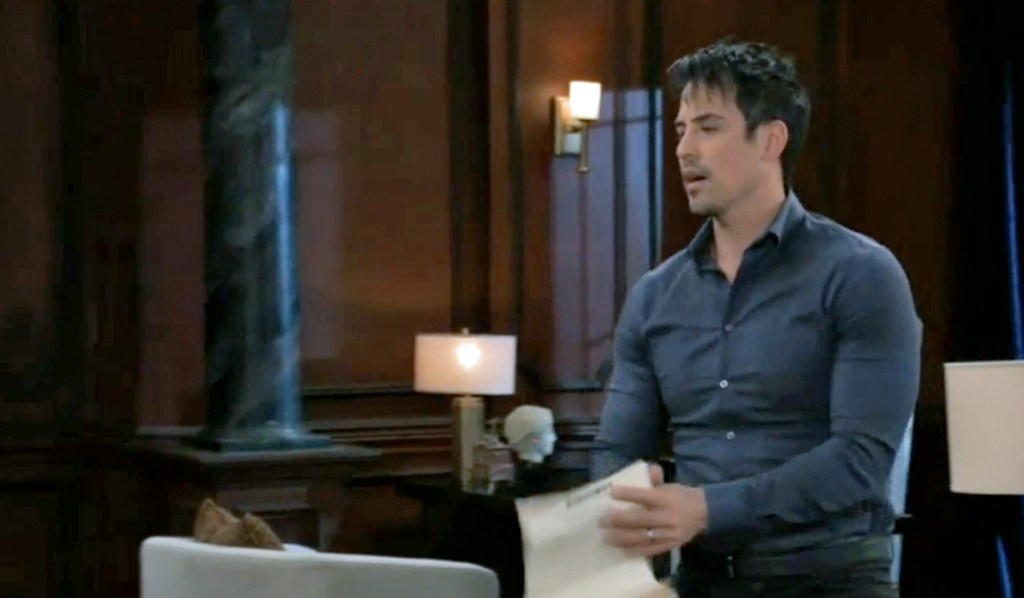 Nikolas tells his mother that he intends to sue for full custody of his child. Laura warns him that not letting this child know his or her mother would be a mistake, even if it is Esme. She admits she visited Esme, and she only seems like a scared young woman. She also says Esme seems to think Spencer is the father of her child. 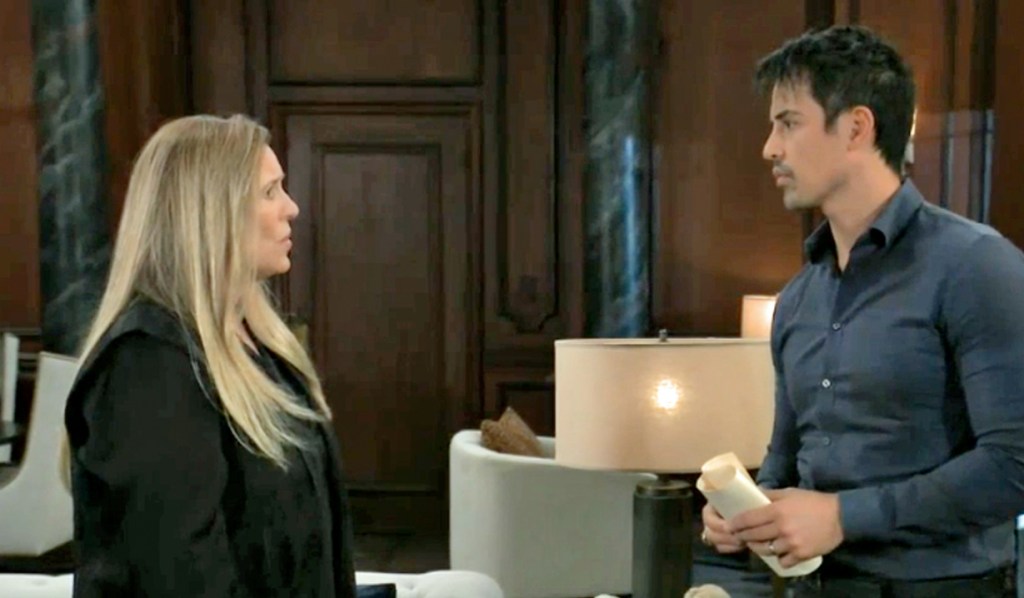 Nikolas believes this is another one of Esme’s tricks, but Laura believes she really has amnesia and remembers nothing. Nikolas hopes it stays that way, which confuses Laura. They’re interrupted when Laura gets a call and excuses herself to take it. Laura tells the person, “I’m on my way,” after hearing what they have to say. 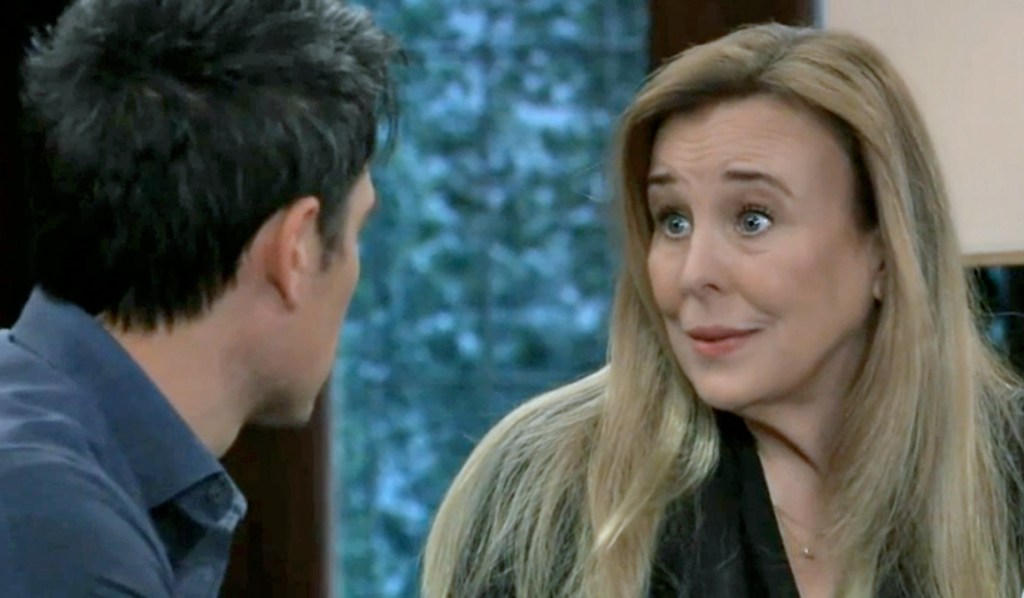 At Sam’s, Dante comes home and learns the kids are at a sleepover with Leo. Dante curses the timing as he must see Heather at Spring Ridge. Sam says the timing is great as she’s coming with him. Sam explains she needs to speak with Esme about her old nanny Maggie. She informs him that Maggie knows who Esme’s father is and implied he was in New York. She wonders if he’s linked to the hook. 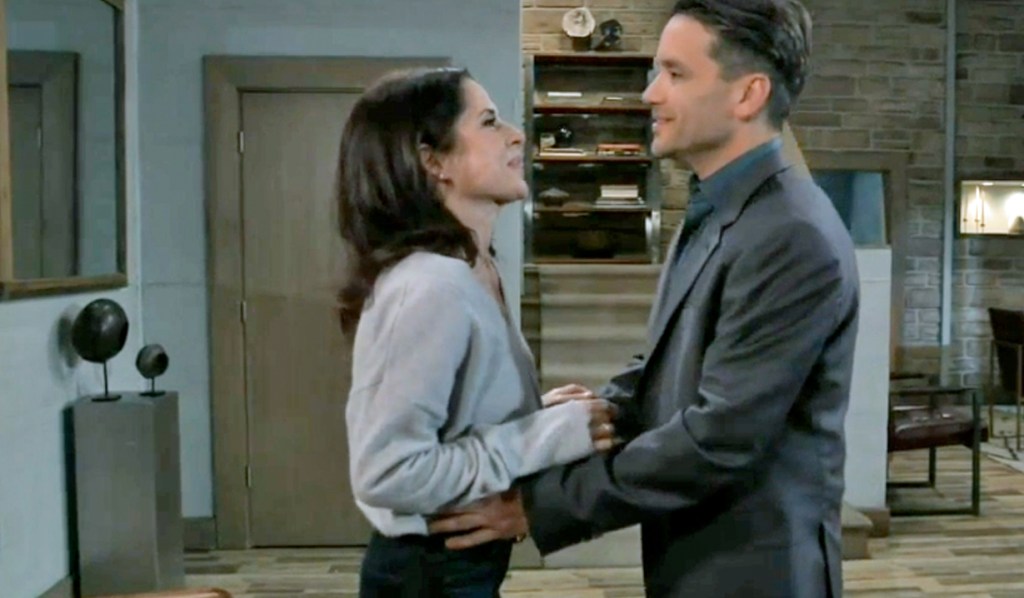 In Spring Ridge, another female inmate Romona threatens Esme, who she says is sitting in her seat in the common room. Heather shows up and puts a shank up to her side, and warns her not to cause problems for her friend Esme. Ramona apologizes and quickly rushes off. 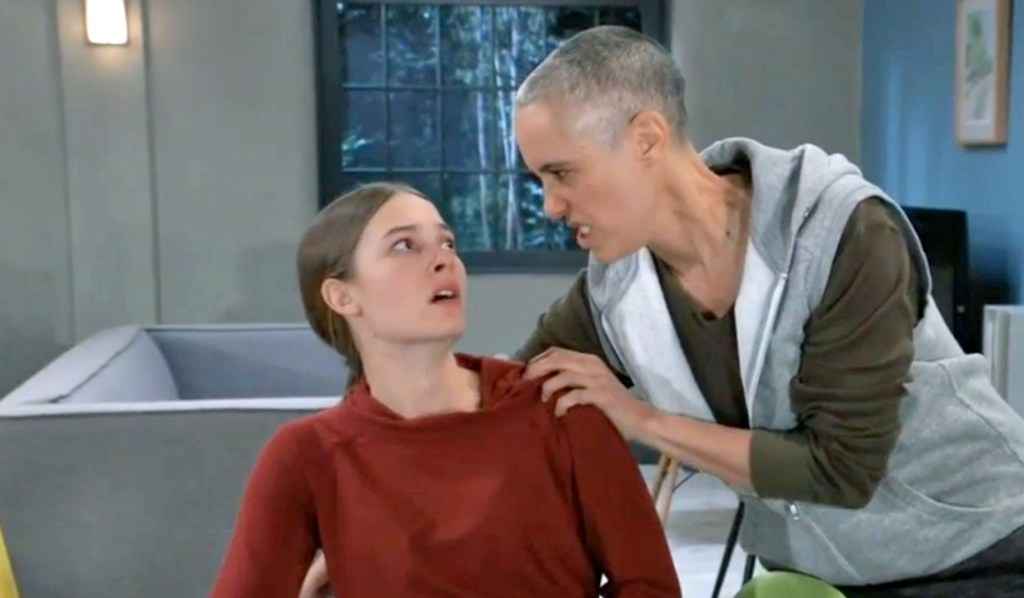 Esme thanks Heather for her help, and apologizes for being short with her earlier. Heather admits she can be extra at times and asks if they can be friends. Esme doesn’t know what she did to deserve her kindness. Heather claims from the moment she saw her she felt a connection to her and wondered if she didn’t feel the same way. Esme only feels confused and worried she may have done these awful things she’s been accused of.

More: Are Esme and Willow headed for a swap?

Esme feels her baby kick, and Heather asks if she can feel it. Esme suggests maybe when they know each other better. Heather knows Esme’s scared about being a mother, but she’ll be a natural. Esme still doesn’t know how given she’s going to prison. Heather assures her that very soon the cops will know she couldn’t be the hook killer. 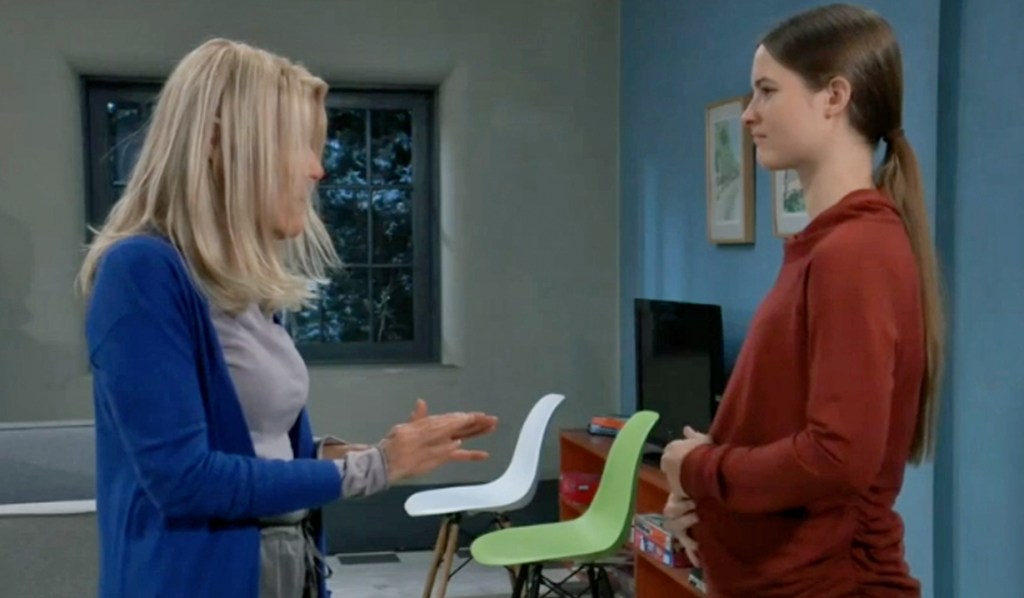 Dante and Sam arrive, and Dante asks Heather to have a chat. They move over to the side, and Sam introduces herself to Esme as a PI. Sam explains she’s been looking into her background and believes she isn’t the hook. Esme thanks her but doesn’t remember anything about her past. Sam believes there is someone who does and fills her in on her old nanny Maggie, and that her biological father might be in New York state. Sam offers to try and find him for her. Esme admits she has no money to pay, but Sam is willing to do this free of charge as it will help many of her friends. Esme answers, “Let’s do it.” 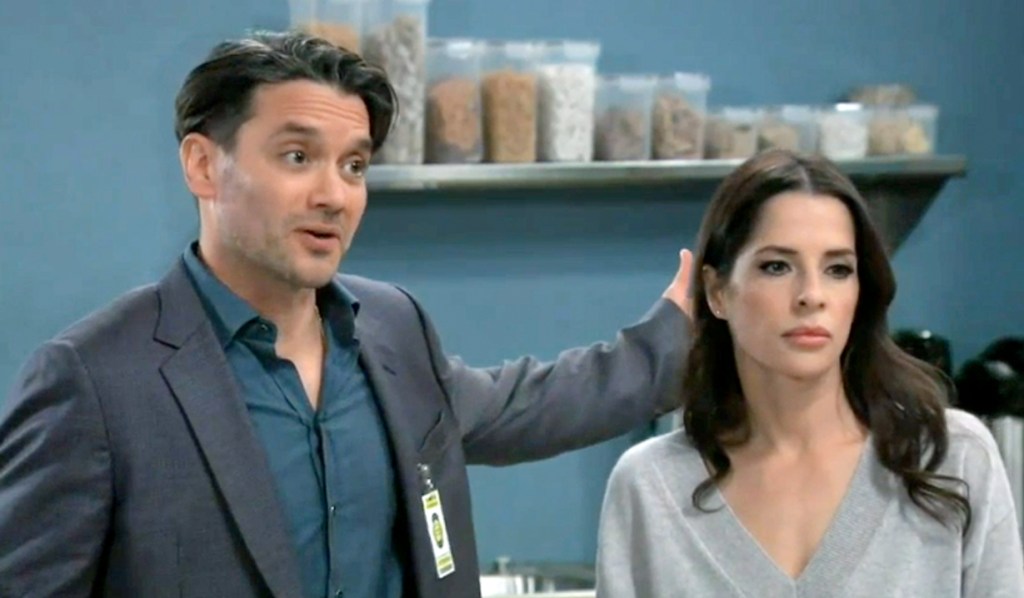 Meanwhile, Dante tells Heather that she was supposed to be finding out about Esme’s connection to Ryan, so what does she have? Heather says Ryan asks about Esme all the time, and now with Esme here she can arrange for them to bump into one another. Dante tells her that she has one week before they send her back to Darkham. 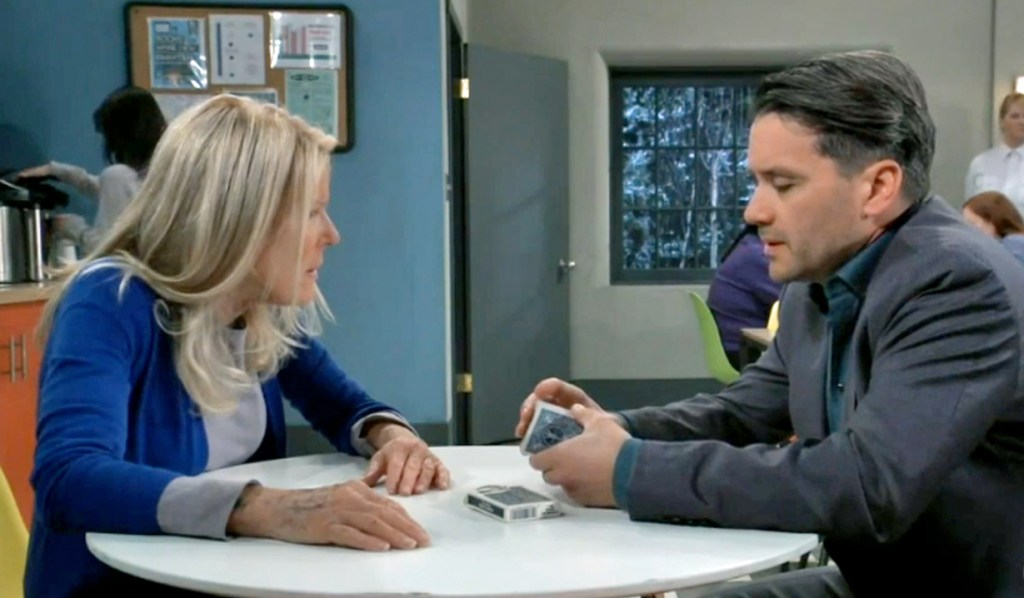 Dante and Heather find Esme and Sam together talking. Esme reveals that Sam believes her father is in the state and is going to try and track him down. Heather is stunned. 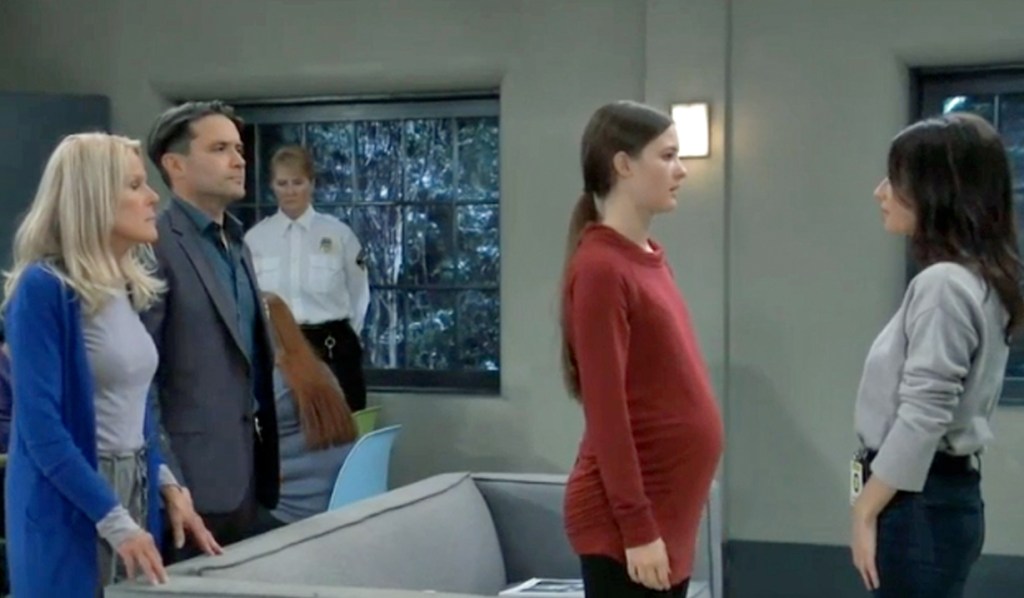 More: Is Willow about to get more bad news?

At Kelly’s, Liz is surprised to see her mom as she made it clear she didn’t want to see either of her parents. Carolyn explains she is in town to consult on a patient, but also hoped to try and reunite with her daughter. They sit down, and Carolyn asks how she is. Liz says she’s still processing the fact that she was indirectly responsible for someone’s death. Carolyn tells her daughter she can ask her anything. 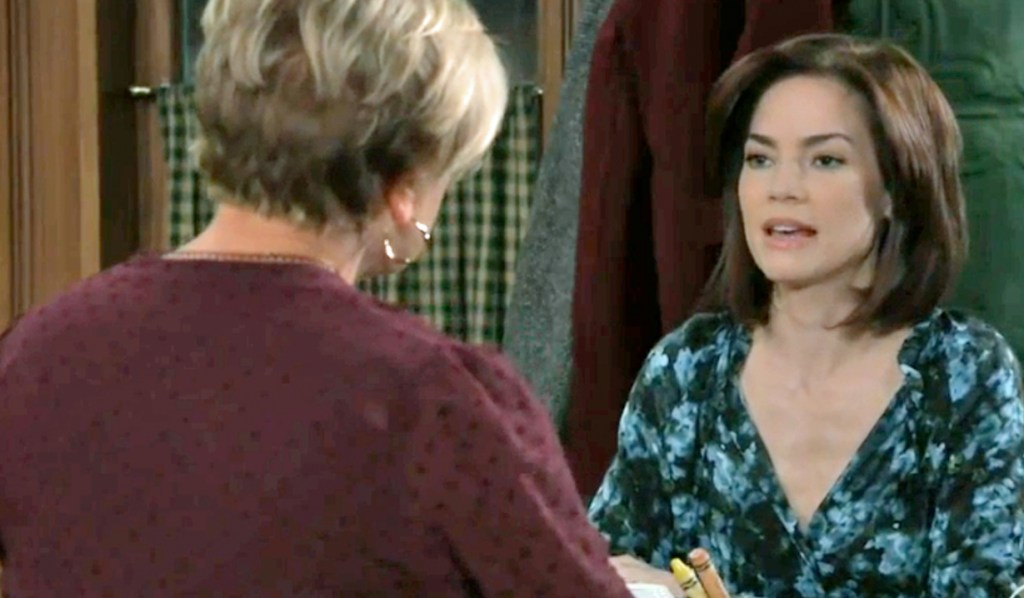 Liz wonders why her mother stayed with her dad given all his affairs. Carolyn cries they had a good marriage, and have a good one now, and she loves him. Liz asks, “More than me?” Carolyn is sorry she made her feel she chose her father over her, and she did what she did to protect her. Liz admits that she understands doing something unforgivable under certain circumstances. Carolyn tells her daughter she’ll be staying at the Metro Court should she want to talk more, but in her experiences, very few things are unforgivable. 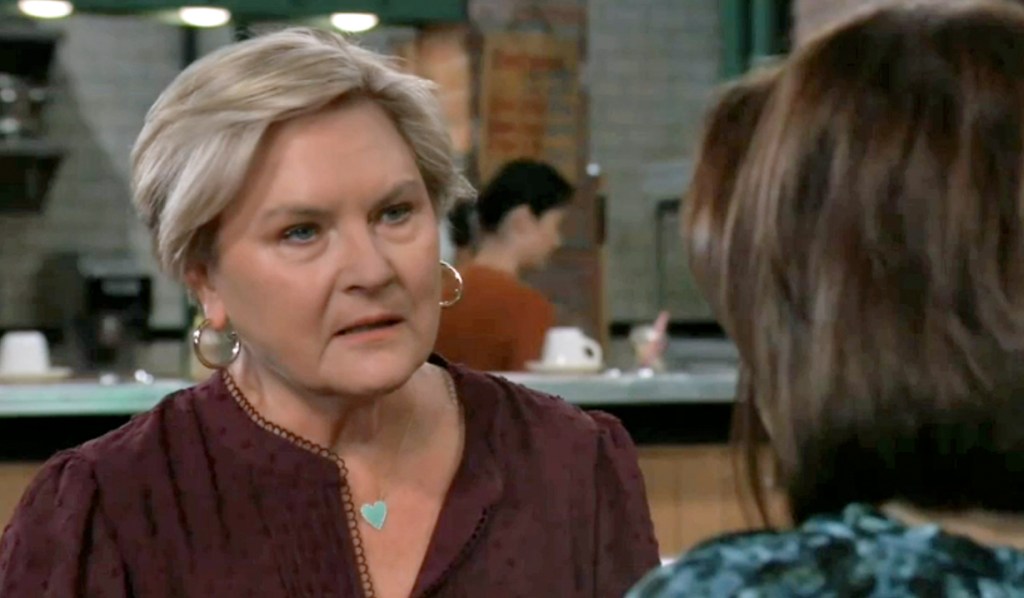 Later, Laura arrives and meets with Liz. Liz informs her that Carolyn is in town claiming to be here to consult on a patient.

Back at Wyndemere, Nikolas answers the door to Carolyn. He thanks her for coming so quickly.

In Austin’s office at the hospital, Ava interrupts a tense moment between Austin and Mason. She explains she returned for the plastic surgery referral, but stares at Mason and realizes he looks familiar. Mason explains he’s Austin’s cousin. She suddenly realizes Mason was at the picnic the night she was hooked. 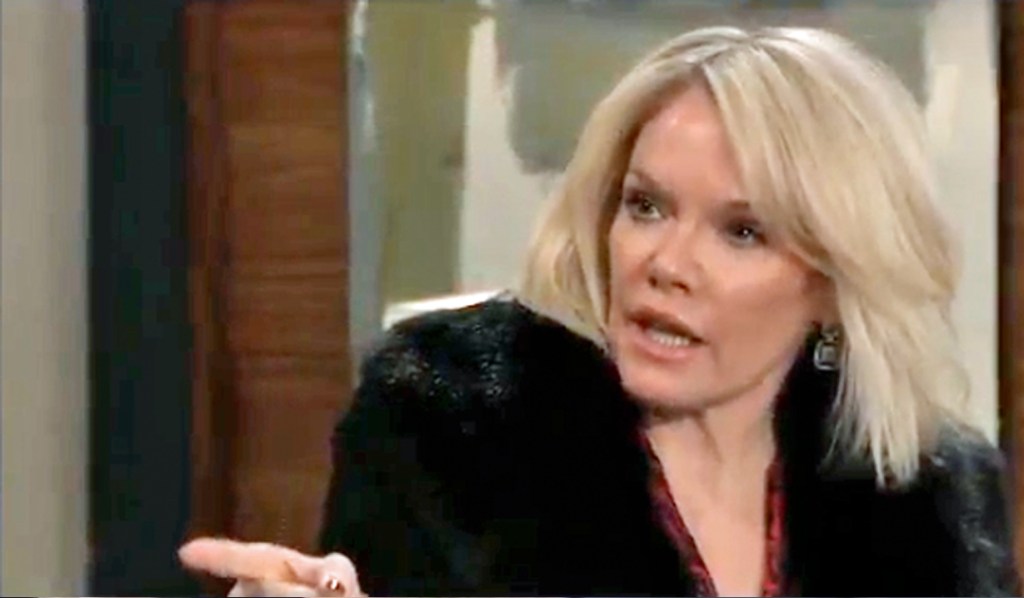 Ava suspects the cops would be interested in interviewing him, but Mason says he lives in Pautuck and is rarely in town much. Austin says his cousin probably needs to get on the road and sees him out. 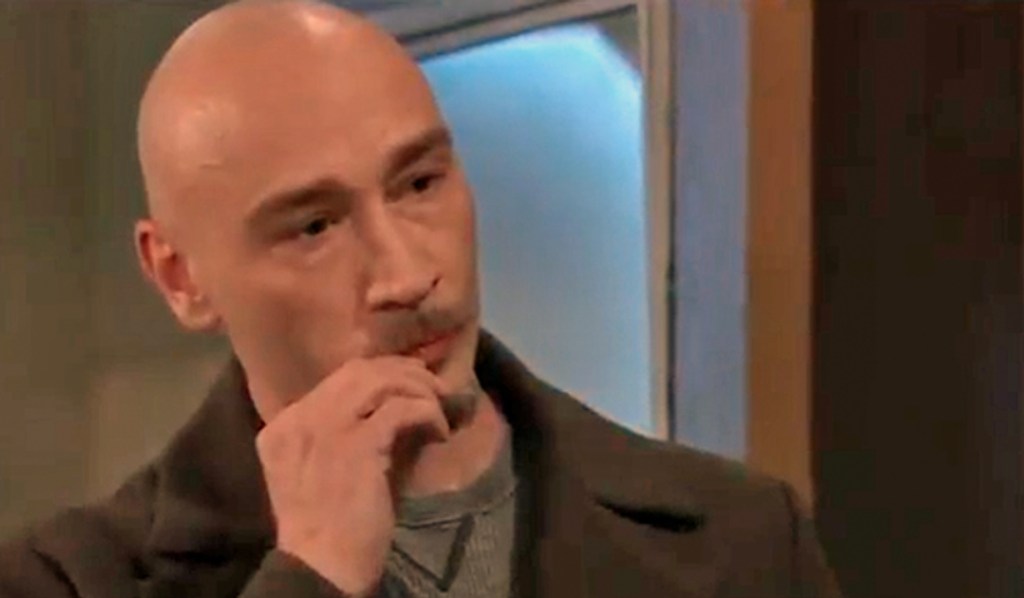 Alone, Ava can see there is tension between Austin and his cousin. Austin brushes it off as old family business, and he chooses to live his life far away from the Gatlins. He explains while he had a great childhood, everything changed when his dad died. He feels his dad would want him to stand his ground, which he’s doing. Ava heads out and wishes him luck. After she leaves, Mason lurks in the halls. 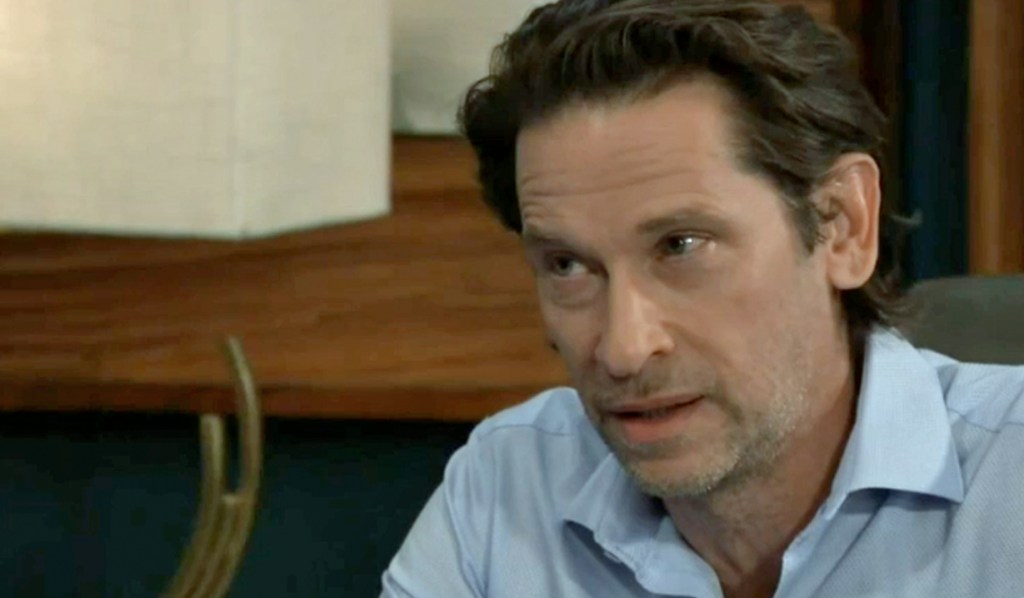 At her dorm, Joss, standing next to a shirtless Dex, is shocked to see Cam at her door. Cam realizes he’s interrupting but asks if Dex is the reason they broke up. When nothing is said, Cam says he’s out of here and walks off, but Joss stops him. She asks him not to do this in the hall. Dex dresses, and Cam heads into Joss’ room. He thinks they must be laughing their asses off at how clueless he is. Joss tells him that he knows she’s not like that. He seethes he has no idea what Joss is capable of, says screw you both, and goes to storm out. Joss stops him, and Dex heads out to give them space. 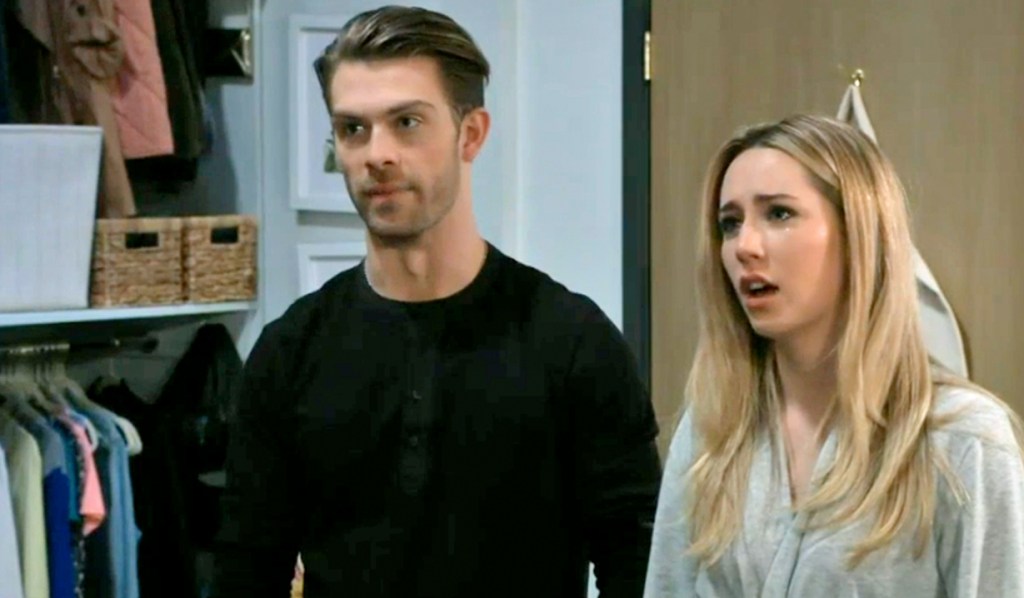 Joss asks Cam why he’s here. Cam explains he found out about Willow’s cancer and wanted to be here in case she needed him as a friend. He feels like a fool because obviously, she had someone else to comfort her. Joss cries she is sorry she hurt him, but they are over, and she doesn’t owe him any explanation. Cam asks if she at least waited until they were broken up before sleeping with him. She says nothing, and he realizes she didn’t. 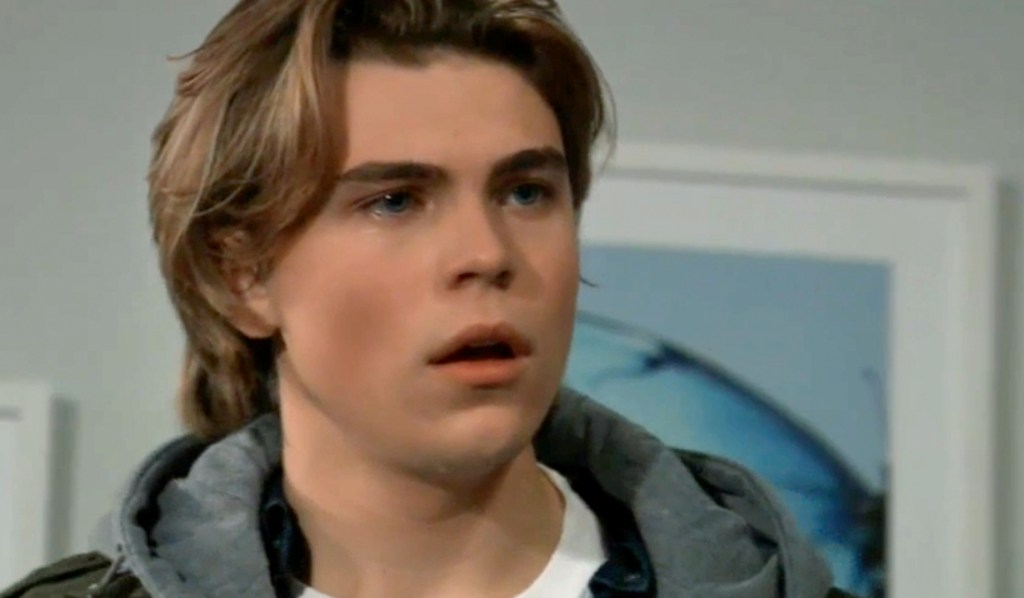 Joss swears she didn’t mean for it to happen and explains the events of the night of New Year’s Eve, including the hook attack, Dex’s intervention, and winding up at his place. Cam vents, “So you were so grateful to Dex you had to have sex with him.” She says that’s not why she did it. Cam accuses her of lying to him and giving him that BS excuse about growing apart. Joss swears they did grow apart, and she changed. He rants, “Yeah you started sleeping with Dex.” Joss swears she had decided they were over long before that night, she just was never able to tell him. Joss begs him not to tell anyone about her and Dex.

At Sonny’s place, he finds Spencer on the phone discussing houses with a realtor. Sonny reminds him that he can stay here, but Spencer explains he needs a house because he’s hiring Diane to gain custody of his brother or sister. He refuses to watch his father ruin another child’s life. Sonny commends him but doesn’t think he’s ready to raise a child. 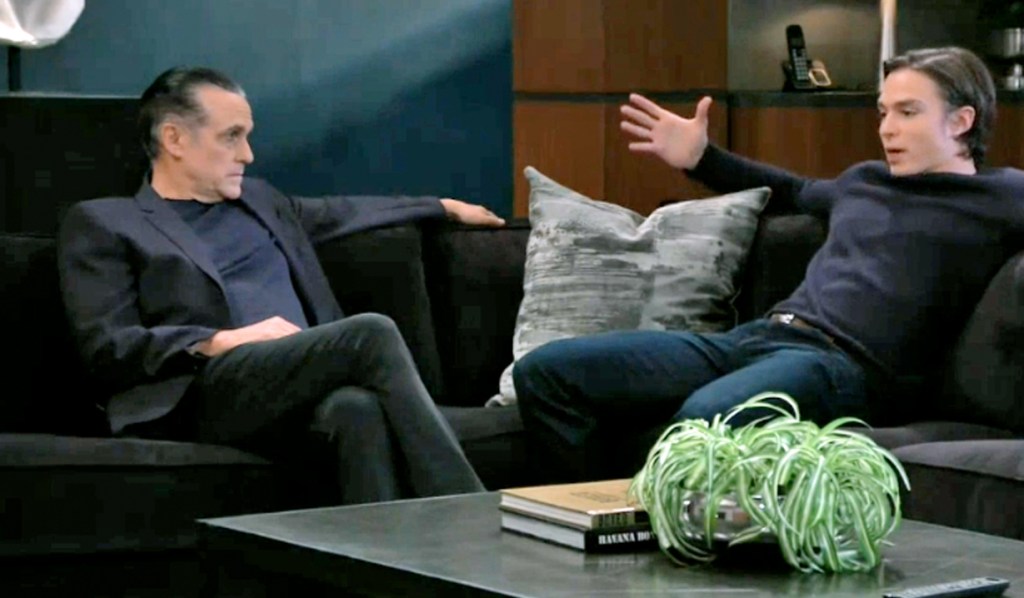 Sonny says it took him a long time to figure out what it means to be a good father, and it means focusing everything on the child as you are no longer what’s important. He asks if Spencer feels he’s ready to do this given the state of his own life. Spencer knows he has a lot to figure out, but he wants to save this baby from being hurt by his father.

Dex knocks on the door, enters when told to come in, and apologizes for interrupting. However, he has to tell Sonny something. Spencer yells at Dex that they are having a family discussion, and tells the errand boy to go polish a fender. Sonny asks Dex to wait outside, so he exits. Sonny tells Spencer that he’s proud that he wants to fight for his brother or sister, but this will mean a fight with his father. 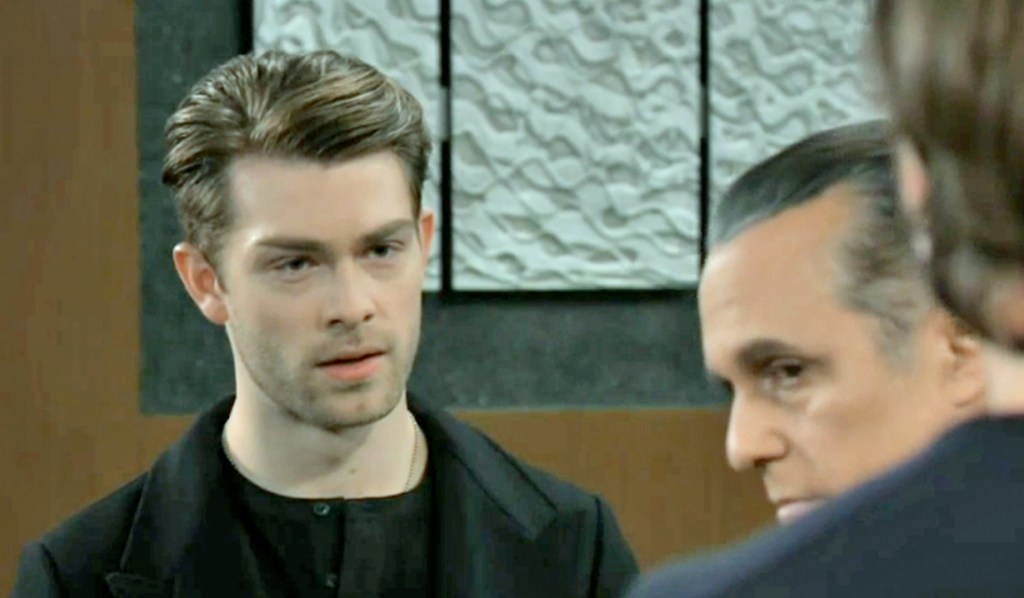 After Spencer heads out, Sonny brings Dex in. Sonny asks what he has to tell him.

On the next General Hospital: Nikolas orders Carolyn to do what he says. In the Paris catacombs, Anna tells Valentin they are running out of time. Maxie asks Sam when she was going to tell her about this. Laura says, “I’m starting to feel that way about Nikolas” Joss cries to Cam that she’s afraid of what Sonny will do if he finds out. Sonny informs Dex that this doesn’t let him off the hook.

Before you go, check out this gallery of Law and Order stars and their real-life partners. 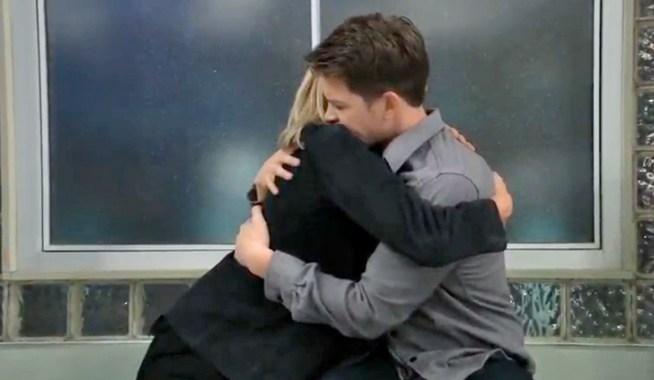 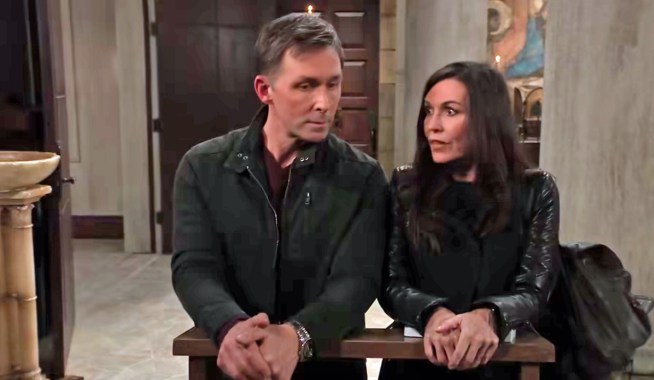