After Overhearing Mason and Austin Arguing, [Spoiler] Finds Themselves on the Other End of a Very Large Fishing Hook 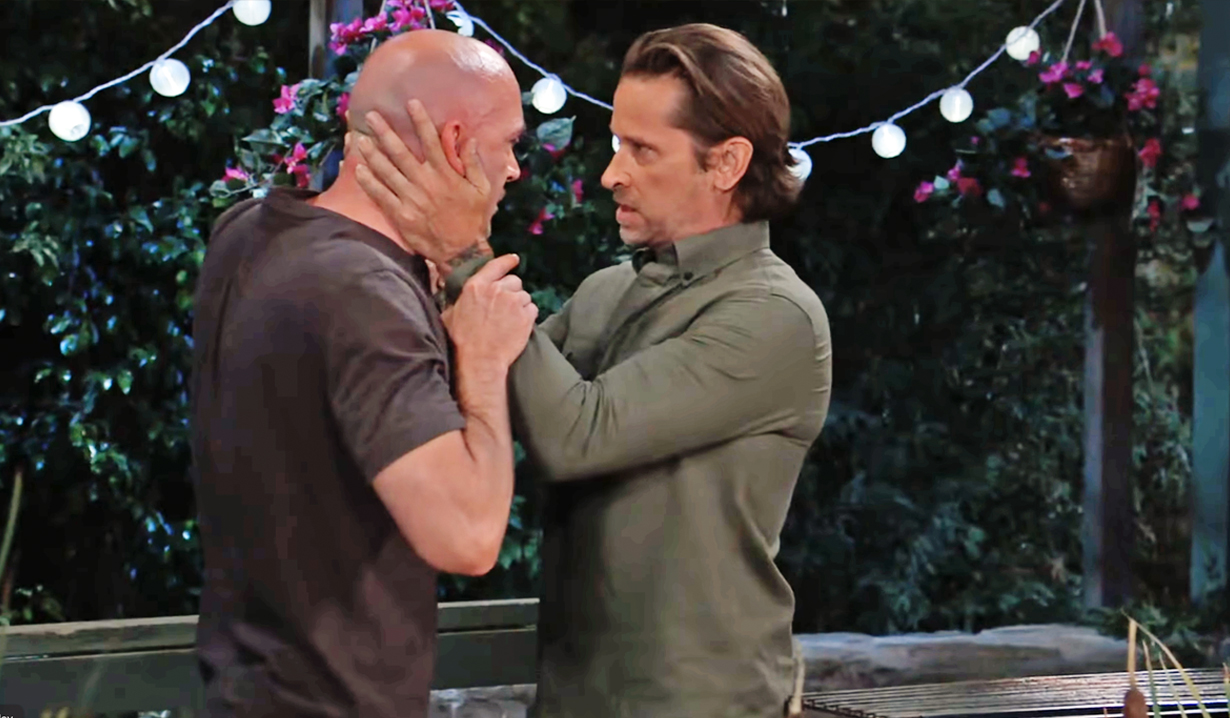 In the Quartermaine stables, Finn returns with a blanket and finds Liz holding his phone as her sister Sarah is calling. She suggests he take it, but he’d rather talk to her. She tries to turn away, but he tells her not to walk away from him or own burdens. Liz accuses him of meddling in her life when she never asked or wanted his help. Finn admits he was in the wrong, but he must take Violet into consideration. He says Violet loves Liz and her cousins, and she brings light into Violet’s life. However, he can’t ignore signs that she’s in distress. Liz says it’s her burden, not his. He feels they’ve finally gotten somewhere and she’s admitted she has a burden. 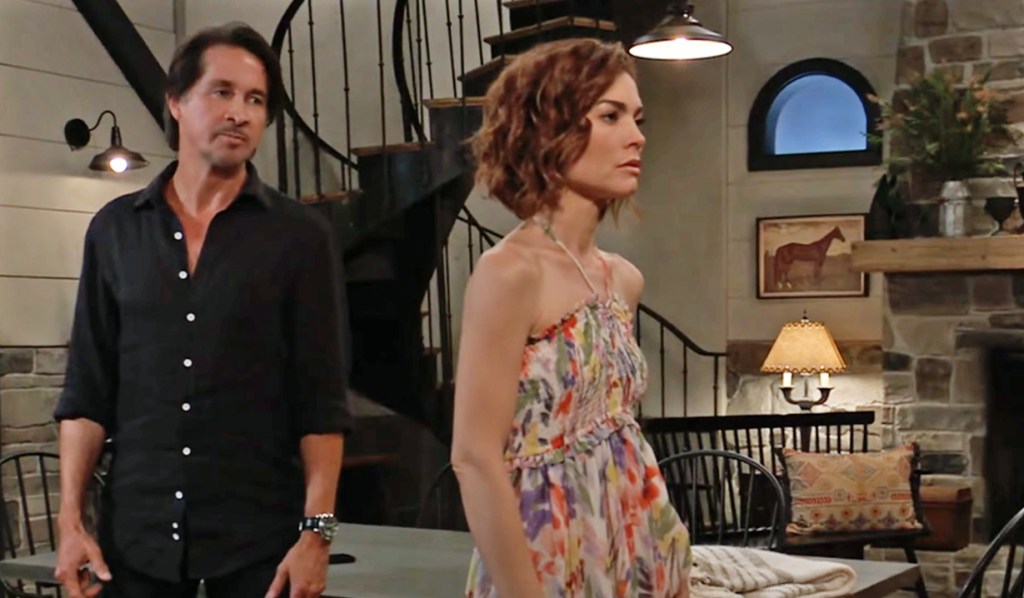 Finn thinks it’s clear she has a problem and says to think of her boys — they may be noticing she’s struggling. What if they reach out to someone like her father? She snaps at him not to talk about her father! Finn can’t turn a blind eye to someone in pain. Liz spits that he’s not her doctor, he’s not her anything! She then storms out. 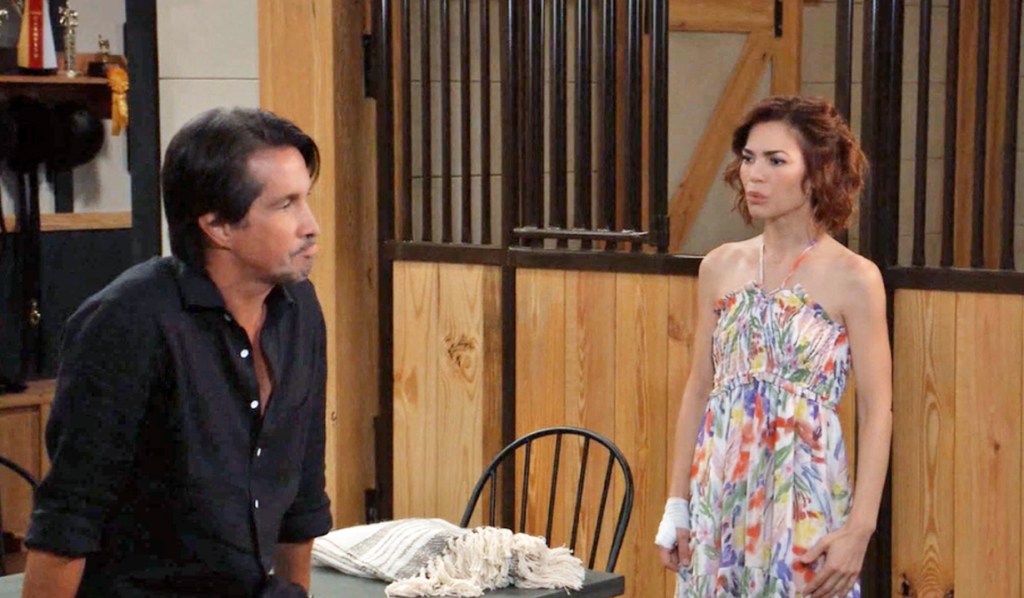 Liz heads out to the grounds and keeps thinking about Finn’s words. She has another flashback of herself and another woman at the top of a set of stairs. She’s telling the woman to stay away from her father. The woman tells Liz to stay out of this as her father wouldn’t want her involved. A young Liz says, “Don’t talk about my father or you’ll see what happens!”

More: Who is Cody’s father?

Felicia hands Mac a drink, which she says he’s going to need. Felicia, along with Lucy and Anna, fill Mac in on Dominique having a son who works for the Quartermaines. Mac is stunned. Felicia says she may have kept him a secret to protect him from Leopold. Mac decides he’s going to find out more about this Cody individual. He takes off, and Felicia follows. 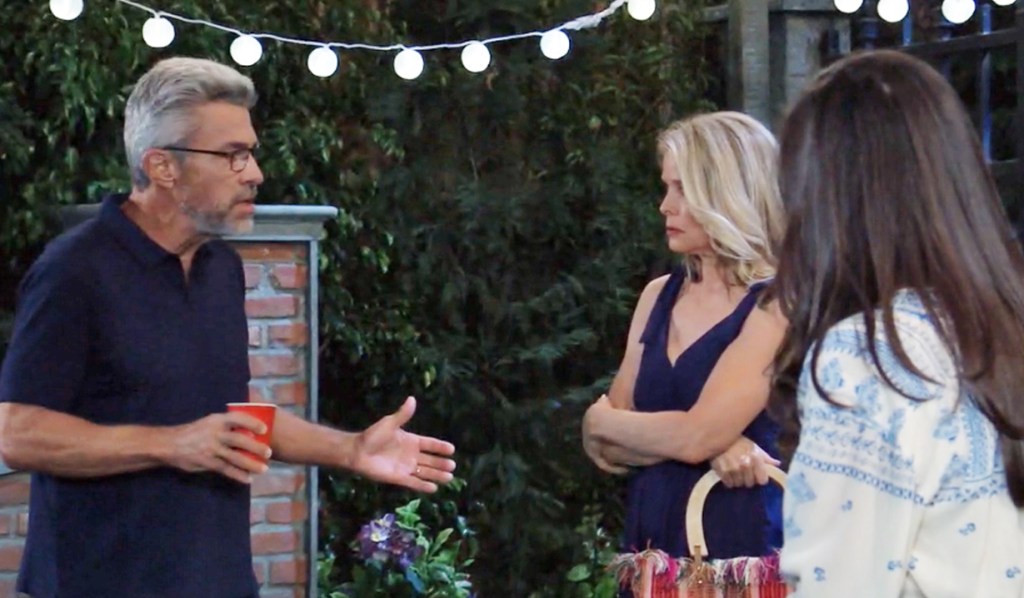 Alone, Anna reminds Lucy she needs to exploit Victor’s interest in her to get information out of him about Valentin. 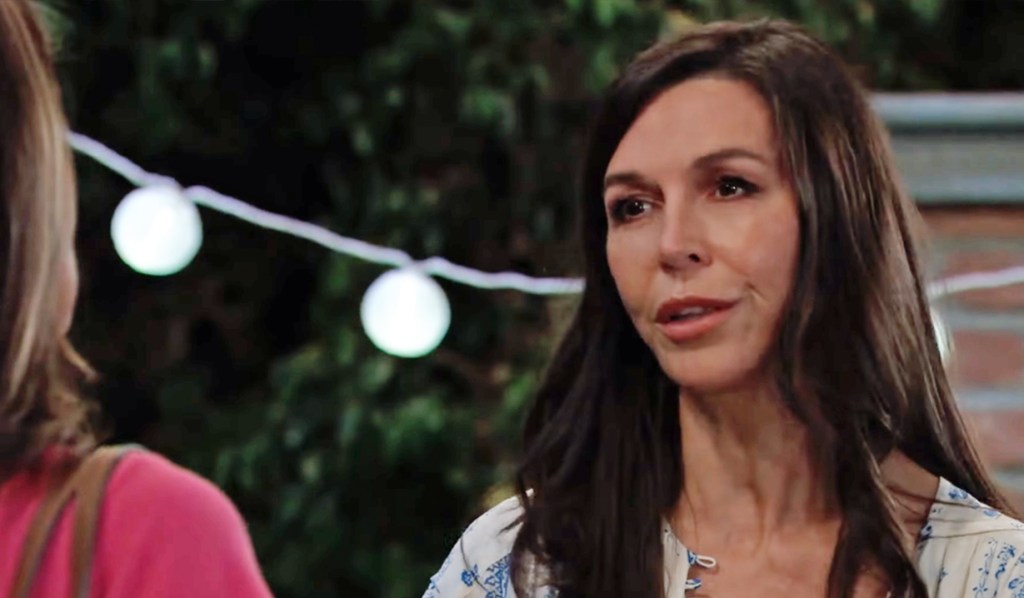 Britt arrives as Cody is serving up pork chops on the grill to Maxie, but she says she’s a vegetarian. Austin takes over the grill when Cody leaves to get supplies, and Britt goes with him. 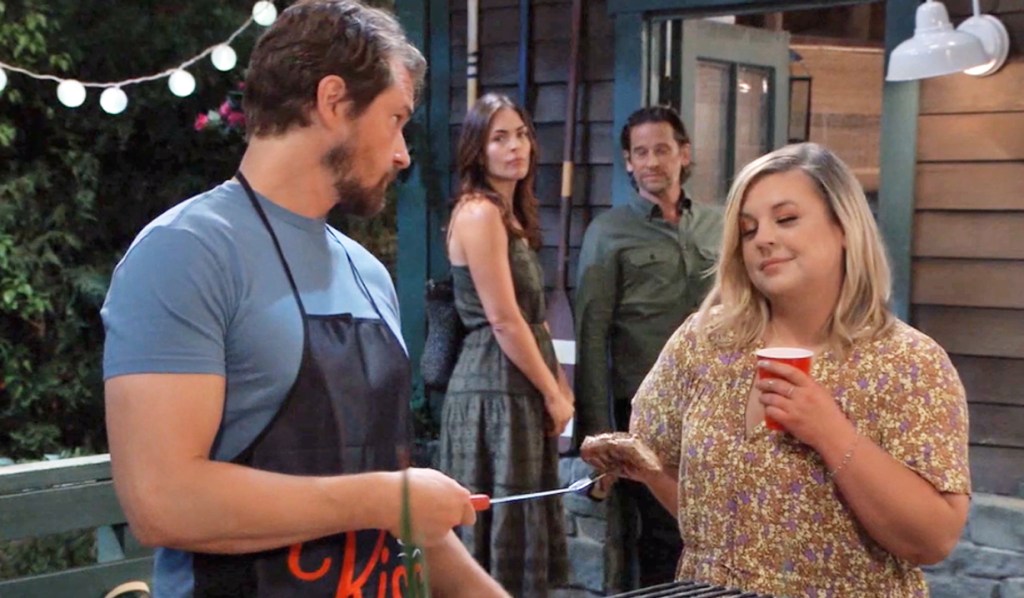 Mason appears, and Maxie is glad he could make it. Mason says his cousin Austin insisted he come. Austin suggests Maxie go take some orders from her parents, dropping the hint that Maxie’s father is a cop. 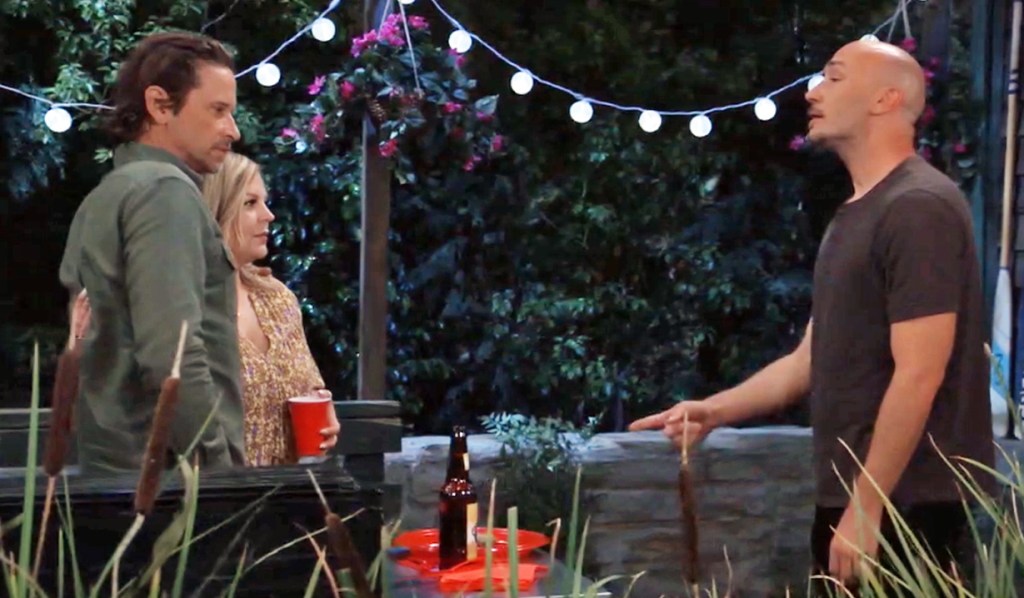 After Maxie leaves, Austin tells Mason that his debt has been paid. Mason says not according to his creditors. Austin squeezes Mason’s head and his carotid nerve to cause pain while he warns him to keep away from Maxie and her family. Mason grabs a knife from the table and holds it to Austin’s neck. He tells him when he calls, Austin answers and says, “Yes sir!” and “Thank you, sir!”

Near the stables, Cody finds some of the supplies missing, and assumes someone might have swiped them for the other grill station. He says he’ll have to check in with Mama Q. Britt thinks Olivia probably doesn’t like that nickname. He says it’s a term of endearment and asks what her mom calls her. She answers, “A disgrace.” He wonders what Faison called her. She bluntly says her father is off limits. Cody asks about Peter, but she won’t talk about him either. He wonders if her whole family is off-limits. 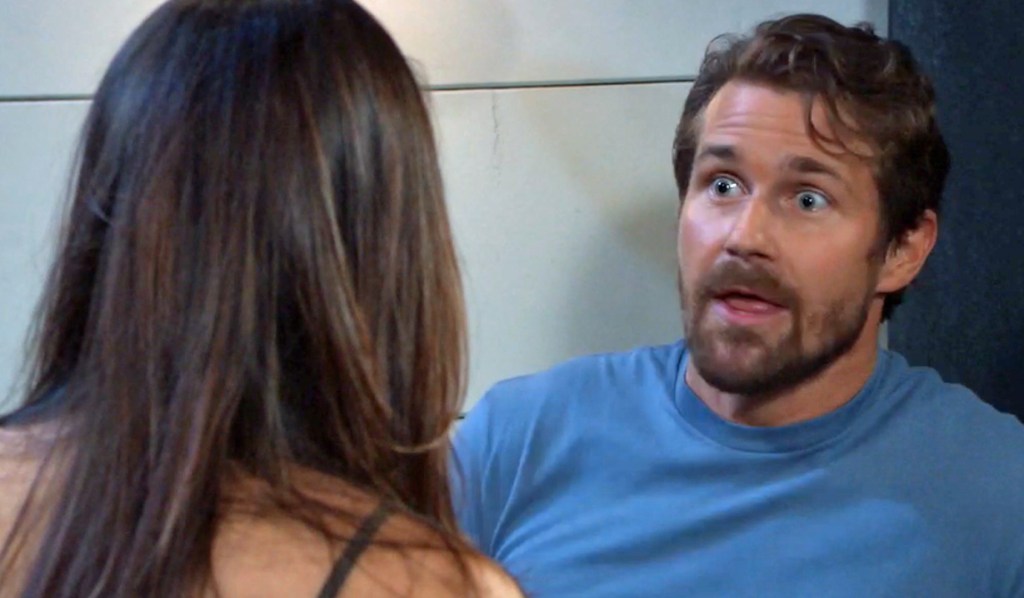 Mac and Felicia approach and Mac takes one look at Cody and knows he’s found him. Britt introduces him to Maxie’s parents, and he wonders why they seem so interested in him. Felicia explains they knew his mother. Mac reveals he was Dominique’s friend, and he met her when she was married to Leopold. Cody states he’s nothing like his father. Mac doesn’t see Leo in him, but he sees a lot of Dominique, and she was a good person. 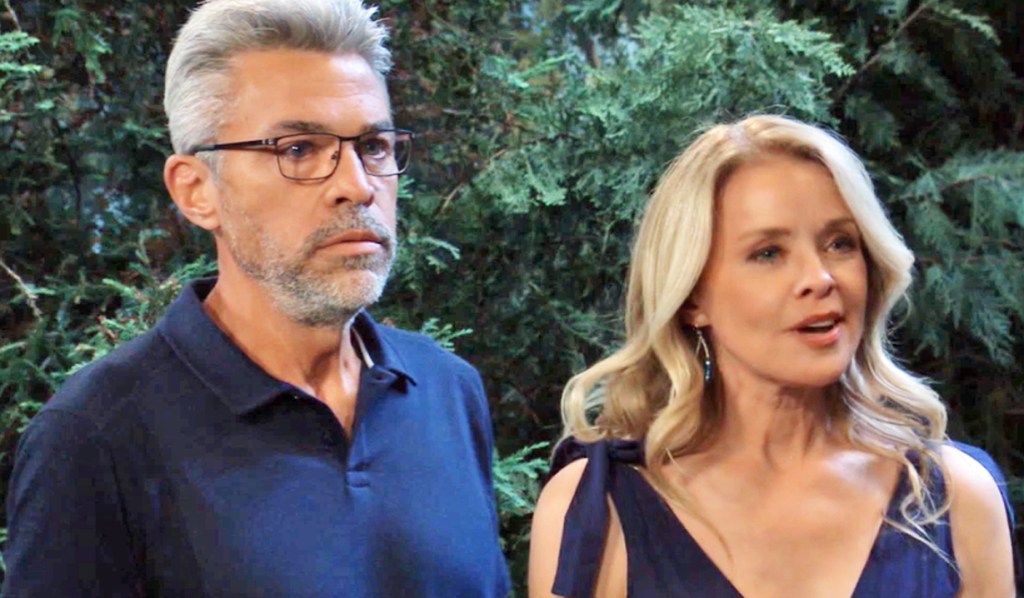 Cody and Britt head into the stables, and Cody thinks that Mac is a weird guy. Cody gets back to asking Britt about her family, but she doesn’t want to discuss them. Cody replies, “Fine, enough talking,” and appears to move in for a kiss.

Outside, Felicia asks Mac if he’s okay because he just lied to Cody. Felicia notes friend doesn’t exactly explain his relationship with Dominique. Mac calls it ancient history and Cody doesn’t need to be burdened with it.

In the kitchen, Victor tells Valentin that he needs his help to get Nikolas, Ava, and Spencer in line. He warns his son if he doesn’t step up then he could make Charlotte’s stay in that boarding school permanent. Valentin seethes, “You bastard!” as Lucy enters and wonders if she’s interrupting. She quickly notices the pickles on the counter and says she was looking for them. Victor flirts with her, and Valentin reminds his father that Lucy has a boyfriend. Lucy comments her boyfriend is out of town, and Victor can’t believe he left her all alone. Valentin wonders where Martin is. Lucy explains he’s looking after his mother. 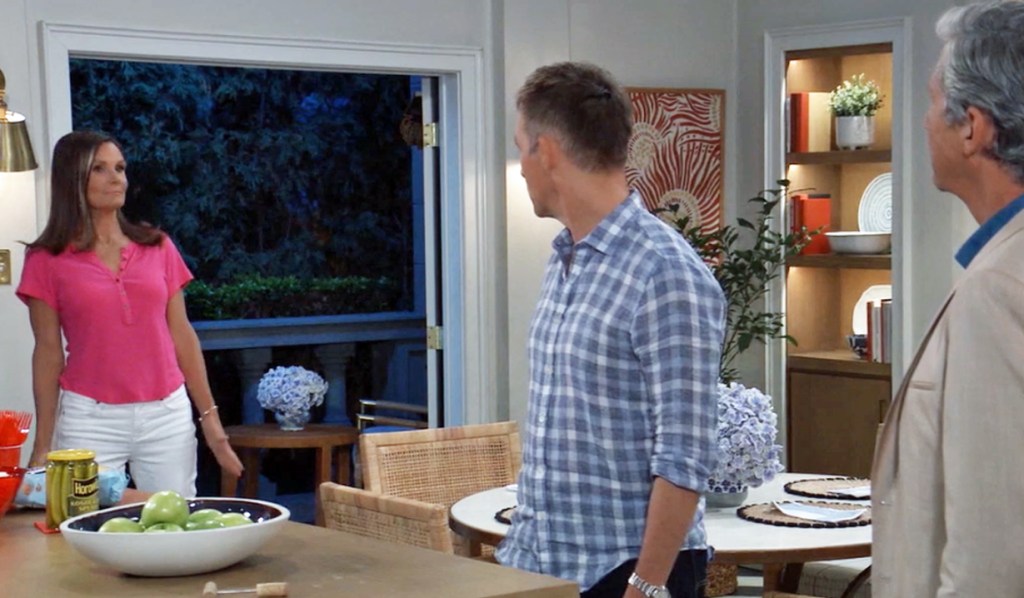 As Lucy and Victor flirt, Valentin snaps a photo and thinks this will get Martin’s attention. Lucy says he need not send those to Martin, and she’ll make sure he gets in touch with Valentin. Lucy thanks Victor for his help with the pickles and departs.

Victor demands Valentin delete the photo he took, so he does. Victor says Charlotte would be proud. 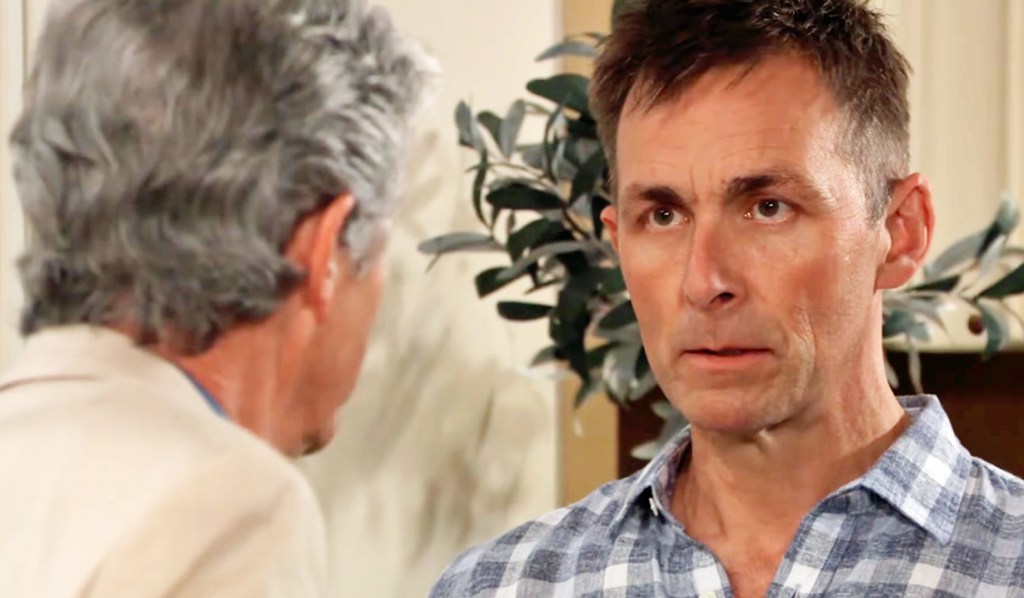 Lucy meets up with Anna and explains there is tension between Valentin and Victor. She says Victor has Valentin on a short leash, and that leash is tightening.

In the living room, Spencer walks in and overhears Ava tell Nikolas that he broke them the minute he had sex with Esme. Spencer asks what she’s talking about. Ava cries, “Your father betrayed me with your girlfriend.” He begs his father to say this is another one of Ava’s lies. Nikolas admits it’s true. 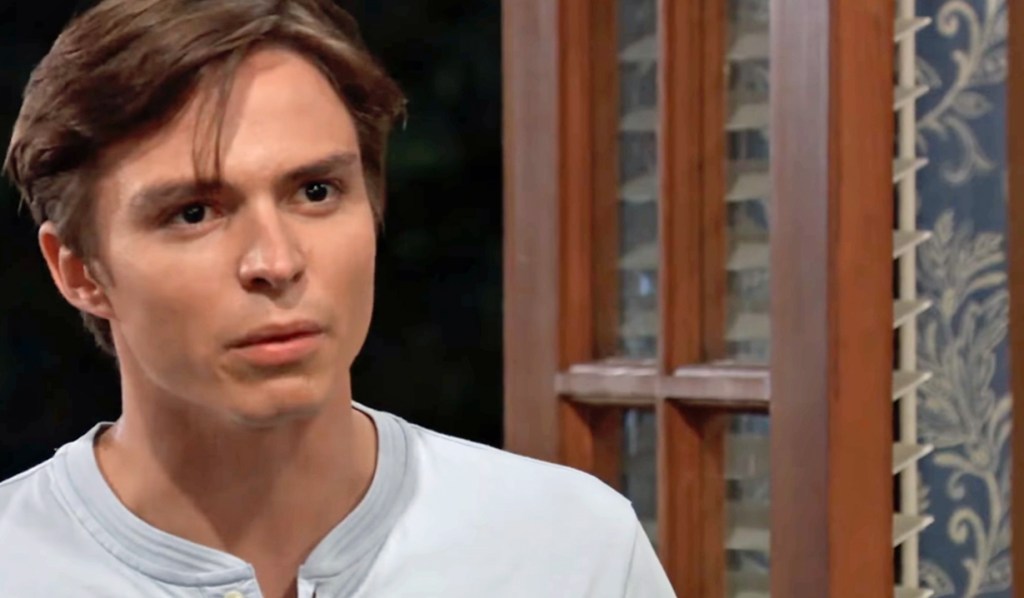 Spencer is in shock as Nikolas lashes out at Ava. He tells her that she did this on purpose because she couldn’t stand that he and Spencer were getting closer, and she won’t get that chance with Kiki and that’s her fault. She slaps him, and he replies, “The truth hurts!” She suggests he ask his son about that and walks out. 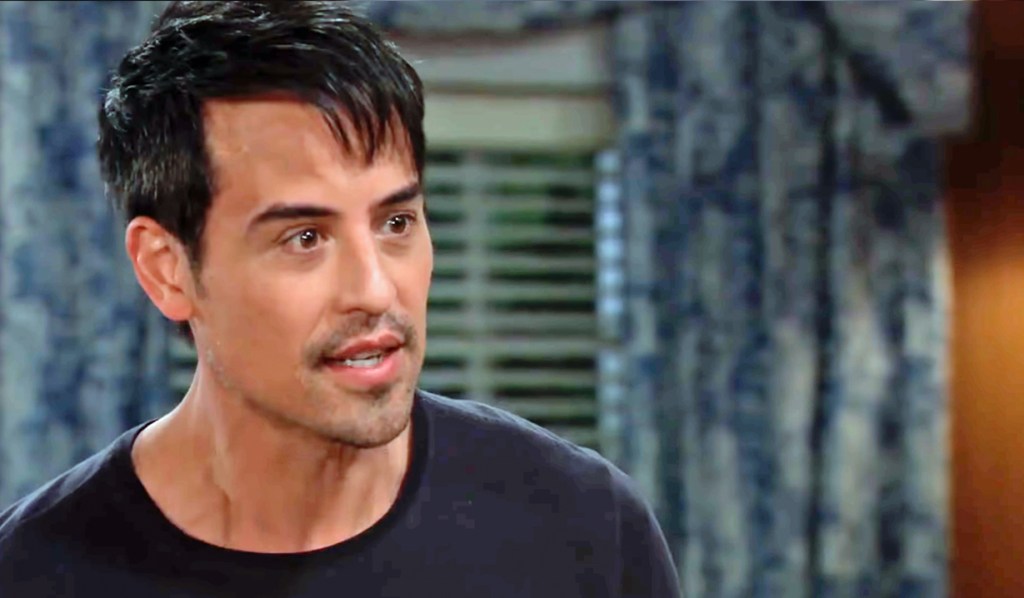 Spencer demands to know how long this has been going on. Nikolas swears it was one time, and a mistake. He swears he didn’t want to hurt him, and he thought Spencer and Esme had broken up. Spencer thinks they are once again in the same place they’ve found themselves time and time again, and his father acted without thinking about him at all. 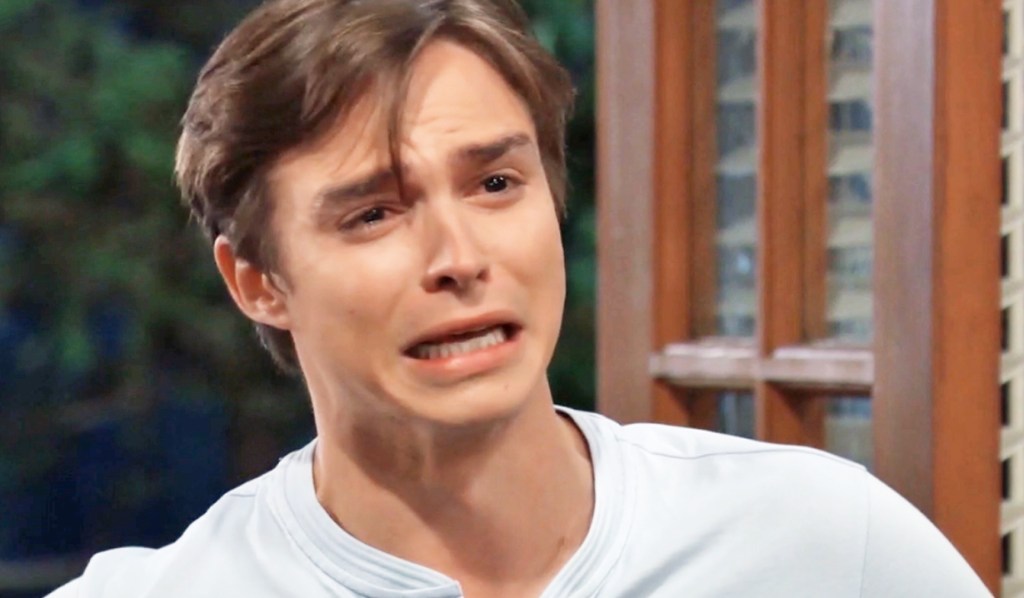 Nikolas swears he didn’t set out to hurt him. Spencer calls this another in a long line of betrayals. Spencer cries he thought he knew who his father was, but he doesn’t and he’s done with him. He walks out leaving Nikolas alone.

Ava heads out to the grill and finds Mason and Austin at each other’s throats. She claims she was just looking for a refill, and they can carry on. Ava walks off, and Mason takes off after her. Austin follows him, and Mason thinks Ava overheard them and must be dealt with. 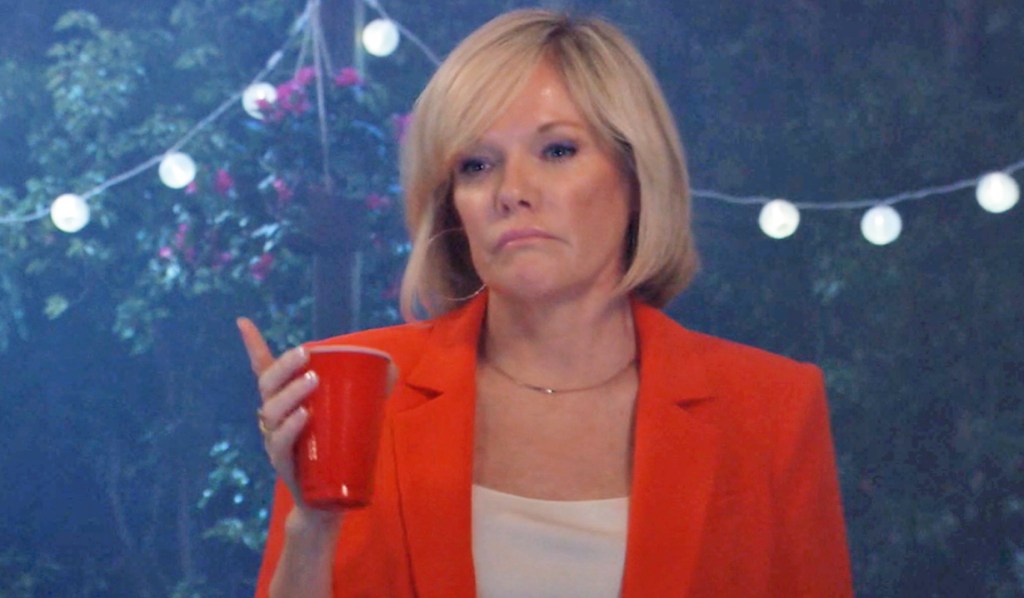 Nikolas finds Spencer chugging beers by the grill. As they argue, Victor happens upon them. Spencer takes off, and Victor asks what just happened. Nikolas tells him, “Ava,” as he storms off.

As Ava walks around, someone grabs a glove from the boathouse and a large hook. The individual approaches Ava from behind and thrusts the hook into her stomach. 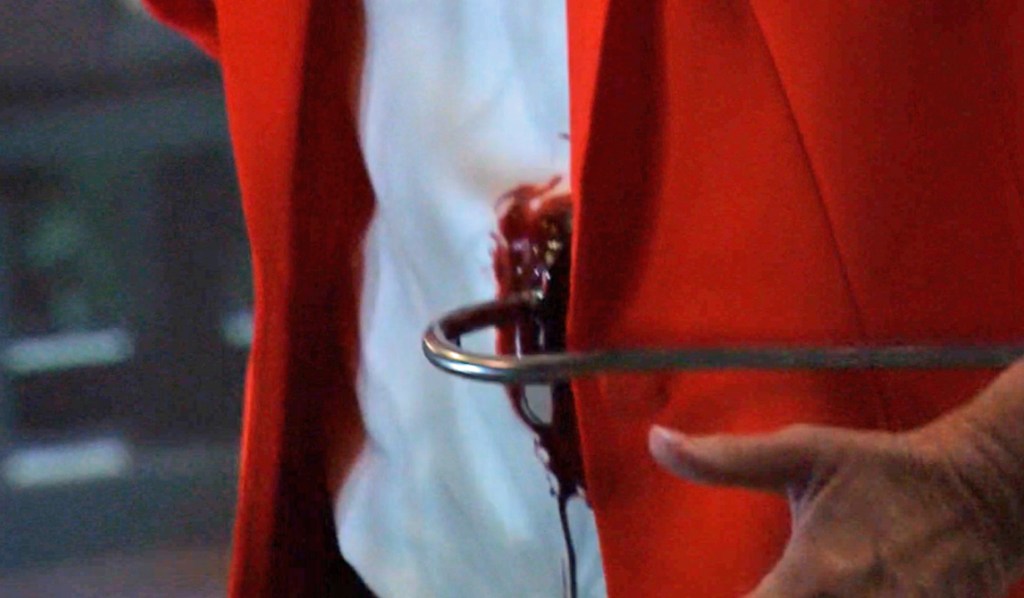 At the Metro Court, Terry and Yuri dip their feet into the pool. He compliments her necklace and asks if it is from someone important. She tells him her mother gave it to her, and there is no one special in her life. Terry explains the crystal symbolizes change and accidentally drops it in the pool as she’s playing with it. Yuri jumps in fully clothed to get it and then puts it back around her neck. 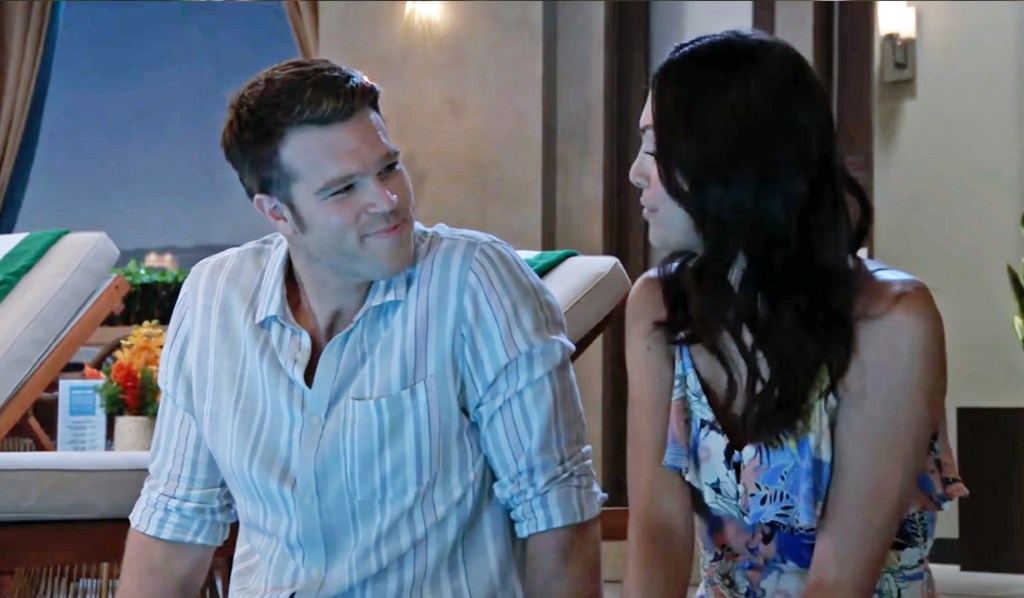 On the next General Hospital: Mac and Felicia come to a realization. Joss finds Ava in need of help. Liz opens up to Nikolas. Finn gives Spencer advice. 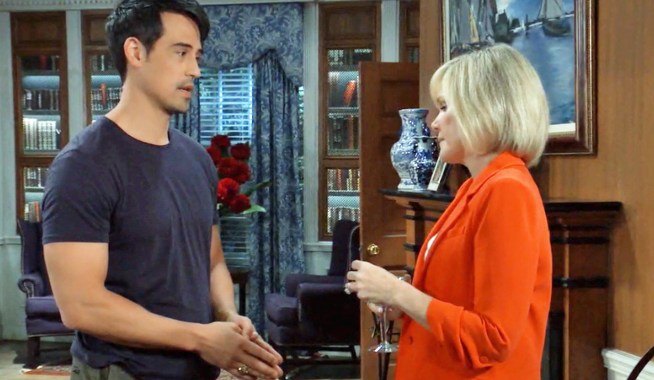 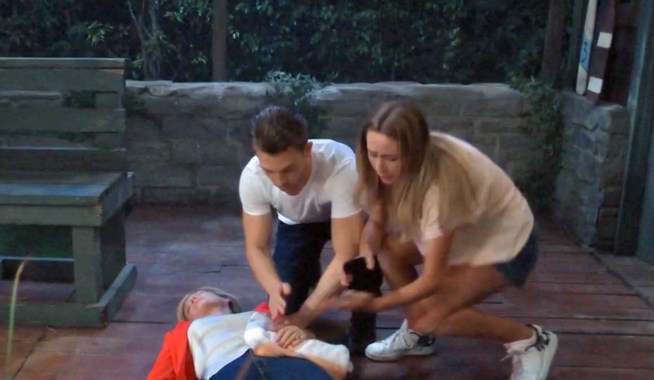