As Carly Accepts Her Metro Court Fate, Valentin Gives Nina an Idea — Plus, Spencer Witnesses the Fireworks Between Trina and Rory

Monday, July 11, 2022: Today on General Hospital, Spencer defends himself to Uncle Sonny, Rory tries to distract Trina, Austin makes another cryptic call, and Nina has things to discuss with Carly. 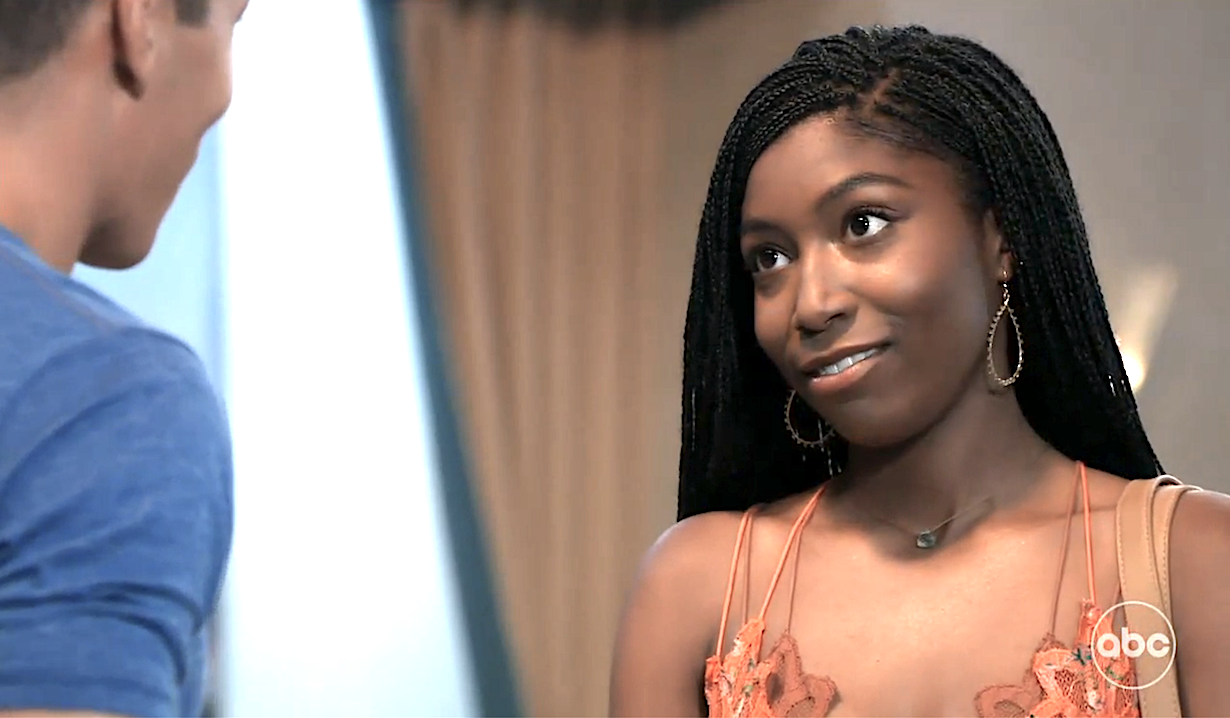 Dante wakes up from a nap on a lounger at the pool. He talks with Sam about the joys of being kid-free for the day. Cody joins them and the men rehash old camp stories.

At a high-top table on the deck, Joss and Trina talk about the latter’s upcoming trial. Trina would do anything to forget about it, even for an hour. Rory shows up and offers to make that happen. He invites Trina to get dessert while they watch the fireworks. He promises to be as distracting as possible. 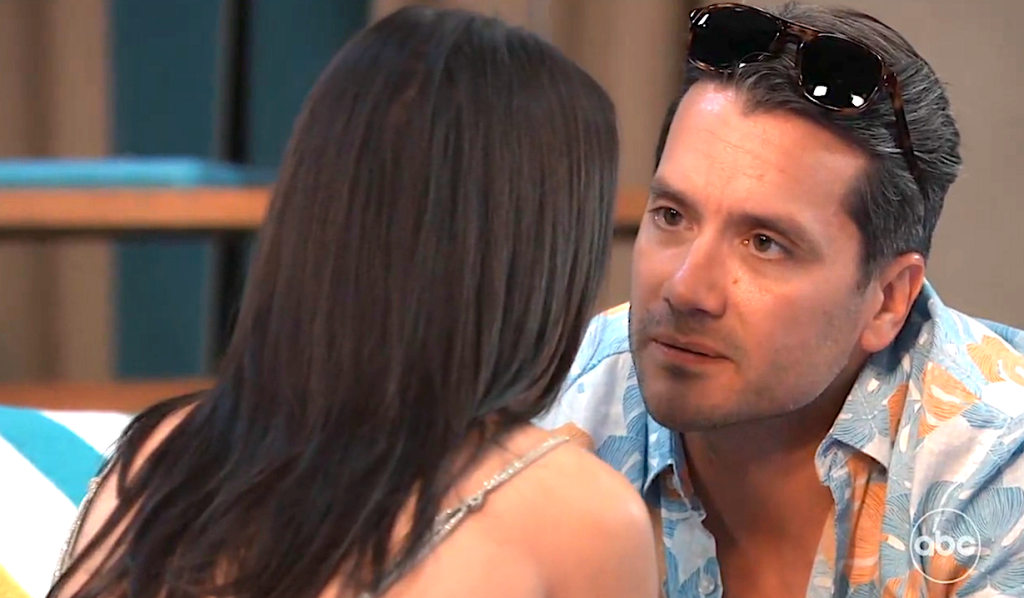 Elsewhere at the Metro Court, Sonny sees Michael and Willow across the way. Willow leads a reluctant Michael to his father to thank Sonny for his help when she fainted. He glances at Michael and calls her family. A tense Michael says they should get going.

After they leave, Sonny approaches Esme and Spencer. Esme yelps at the sight of him. A grave Sonny assures Esme she has nothing to fear from him and asks for time alone with Spencer. She leaves to get them a spot at the park for the fireworks. Alone, Sonny rails at his nephew for making terrible choices. Spencer swears on his mother’s memory that he’s doing the right thing. He loves Sonny and would never do anything to hurt or disappoint him. Sonny says time will tell and urges him to be careful. After Sonny walks away, Spencer says to himself, “Time’s running out.” 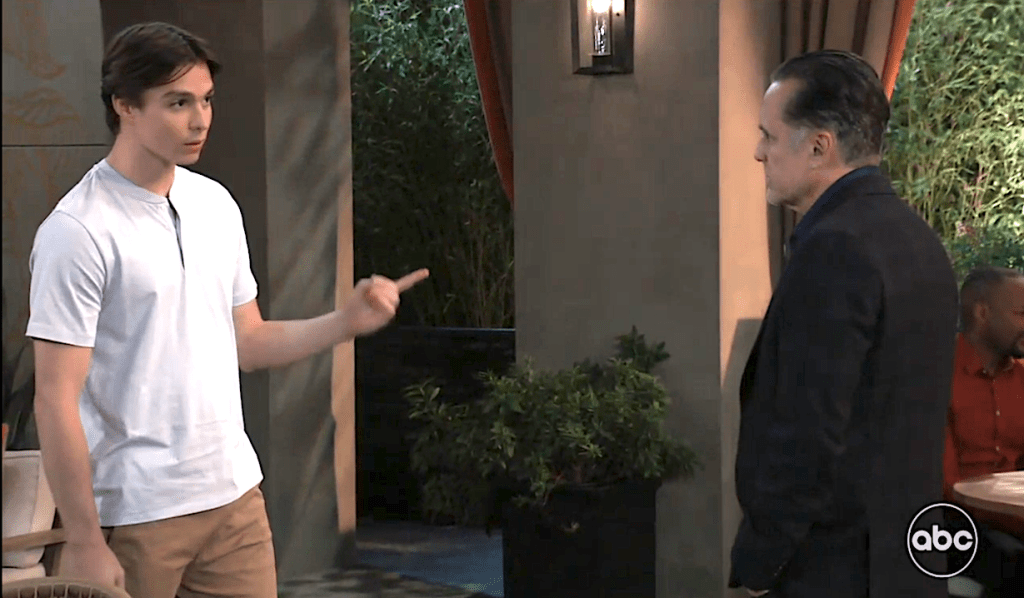 Carly meets with her money manager, Reggie in her office. He doesn’t approve of her taking out a loan to buy back her half of the hotel, but agrees to make some calls. Olivia enters and tells Carly what a terrible idea it is to take on so much debt. Reggie leaves to find the best terms he can get her, as Olivia tries to convince Carly to let her buy her half of the Metro Court. Michael and Willow show up and overhear. 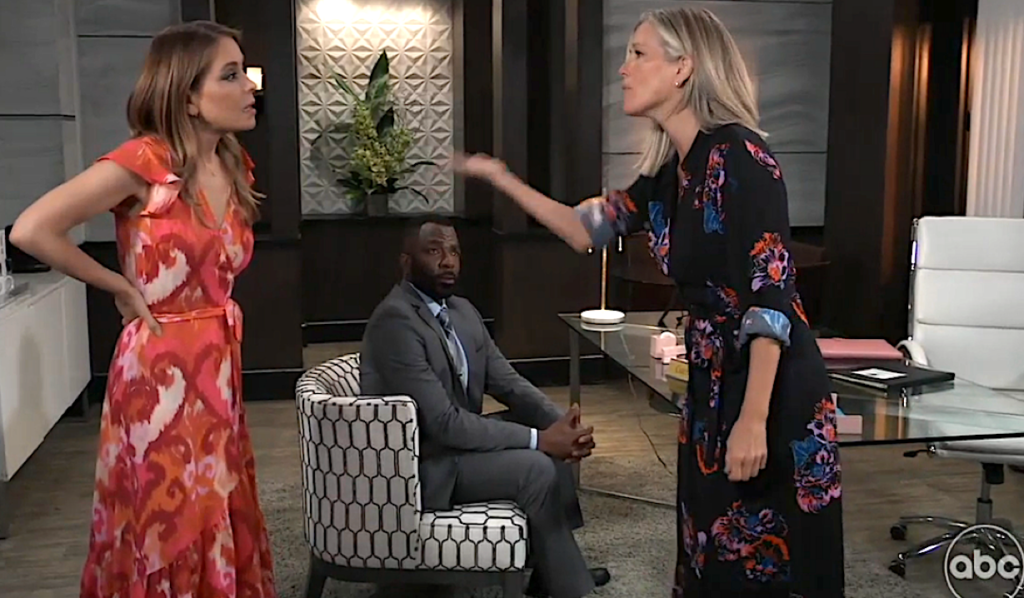 Olivia leaves Willow and Michael to grill his mother. When Michael gets all the details, he offers to give Carly the money, but she flatly refuses. Carly then learns they’re having a baby. She shakes with excitement and pulls them in for a hug. Joss shows up and learns she’ll be an aunt again. Reggie returns with numbers for Carly, who tells her kids she’ll meet them later.

After they’ve gone, Reggie fills Carly in on not-great loan terms. What does she want to do? Carly says she just got the best reminder there are more important things than money. She can’t risk her house and she can’t buy back her half of the hotel. “I guess I’m no longer co-owner of the Metro Court,” she says, deflated. 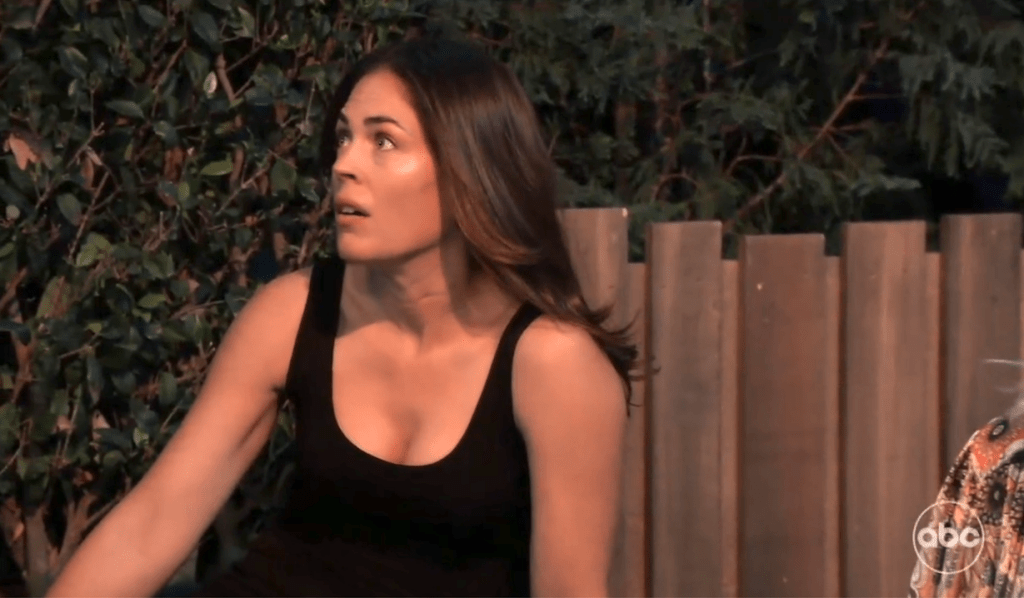 In the park waiting for fireworks, Britt rolls her eyes at Maxie and Austin making “goo-goo eyes” at each other. She stands to leave and they apologize. They thought more people were coming to the picnic, as Spinelli arrives. Britt leaves anyway and Austin steps away to take a call. Maxie tells Spinelli that she’s worried about Britt giving up on Society Setups. Spinelli thinks it might be for the best. Maxie wonders why he would say that. Spinelli thinks it’s better to give up on love than be matched with the wrong person.

By a row of trees, Austin tells the person on the other end of the phone they need to live up to their end of the bargain and to not contact him again. He returns to enjoy fireworks with Maxie, as Spinelli leaves. When he appears distracted, Maxie asks what’s going on. Austin blames it on old memories, but declares he’s happy to be there with her in the present.

Valentin visits Nina in her office. They discuss Carly’s predicament and Nina losing visitation rights to Wiley. She’s so tired of being the villain all the time. Valentin suggests it’s time to change that. After warning her to stay away from Victor, should he come sniffing around her, Valentin suggests there’s a way for Nina to balance the scales.

More: Nancy Lee Grahn taking a break by the lake

At the pool, Cody spots Britt and he steps away from Dante and Sam to talk to her. She tries to brush him off, but he points out they matched. Britt tells him he’s not her type, but he doesn’t think dating her type has worked out thus far. He keeps pressing until Britt agrees to one date.

Meanwhile, Olivia rants to Sam and Dante about Carly not letting her help her with the hotel. After Olivia’s gone, Olivia and Sam decide to enjoy the incredible view from her bedroom.

In bed, Sam lies fully clothed in Dante’s arms, as he recalls the Fourth of July celebrations he had as a kid. She promises to go with him next year. He says that’s a date. They watch the fireworks go off from her bedroom window.

More: A change in Trina’s defense in GH promo

In the park, Trina enjoys the brownies Rory made. He assures her he won’t disappoint her. They kiss under the fireworks. He calls her beautiful and asks if he overstepped. She assures him he didn’t. They kiss again as Spencer walks by and sees them.

Spinelli runs into Cody at the pool. Cody thanks him for matching him with Britt in exchange for not outing him as the mastermind behind Society Setups.

After the fireworks, Joss, Michael, and Willow return to Carly. Michael assures his mother they’ll figure out a way to get her hotel back without her taking out a loan. She beams at them, but privately stresses when they leave. Nina bursts into Carly’s office. Carly says they have nothing to talk about, but Nina declares that’s not true.

Next on General Hospital: A distraction threatens to derail Trina’s trial, and Carly’s loved ones try to figure out what happened.

Beyond Salem Chapter 2 premiered today on Peacock. Take a look at our photo recap below to find out what Steve Burton’s character is up to — and with whom! 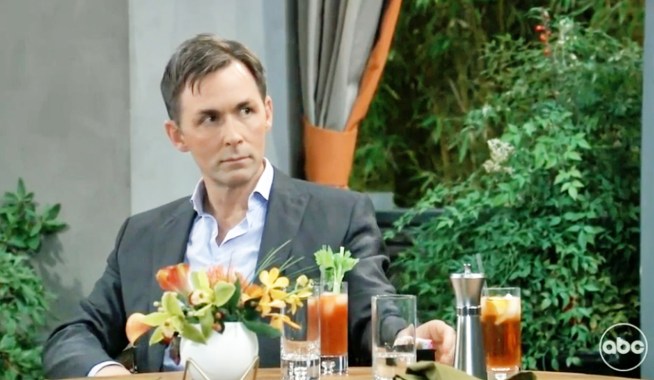 After Carly Rejects Her Offer to Return the Metro Court to Her, Nina Is Surprised by Sonny’s Reaction to Her Move 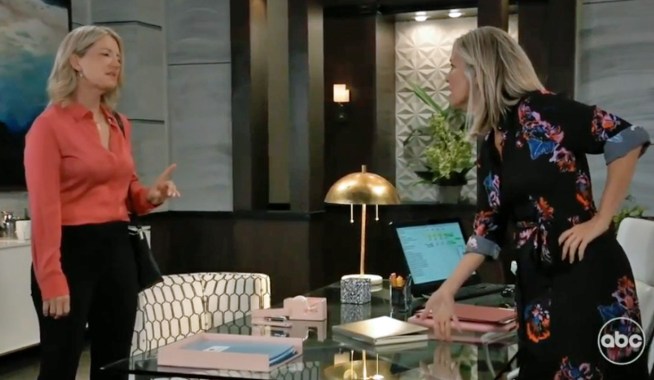