Tuesday, March 29, 2022: Today on General Hospital, Ava seeks Sonny's help dealing with Esme, Victor learns Esme may be pregnant, and Spencer doesn't know if he can believe Trina is innocent. 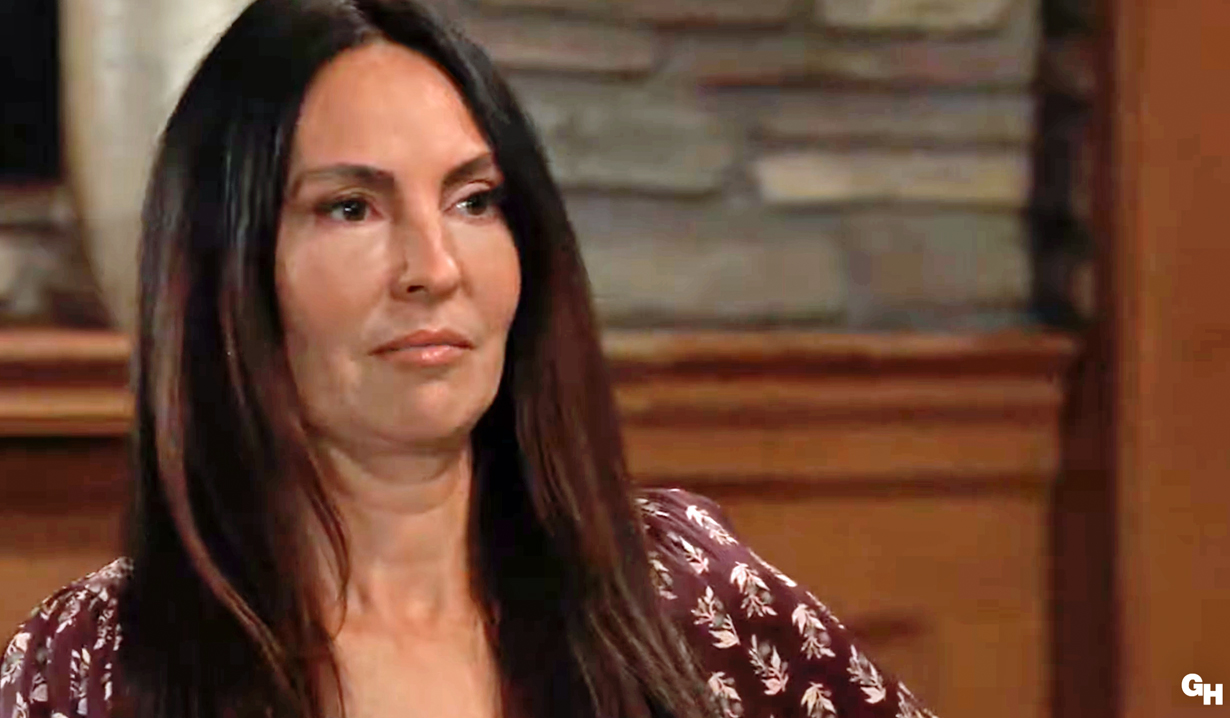 At Laura’s place, Spencer says good morning to his grandmother and reveals he didn’t sleep well. He privately recalls Esme telling him that she may be pregnant. Concerned, Laura tells him that he can confide in her. Spencer reveals it’s about Esme, which Laura figured. There is a knock at the door and Laura bets that is her. However, it’s Victor, who dropped by to see Spencer now that he’s back home. 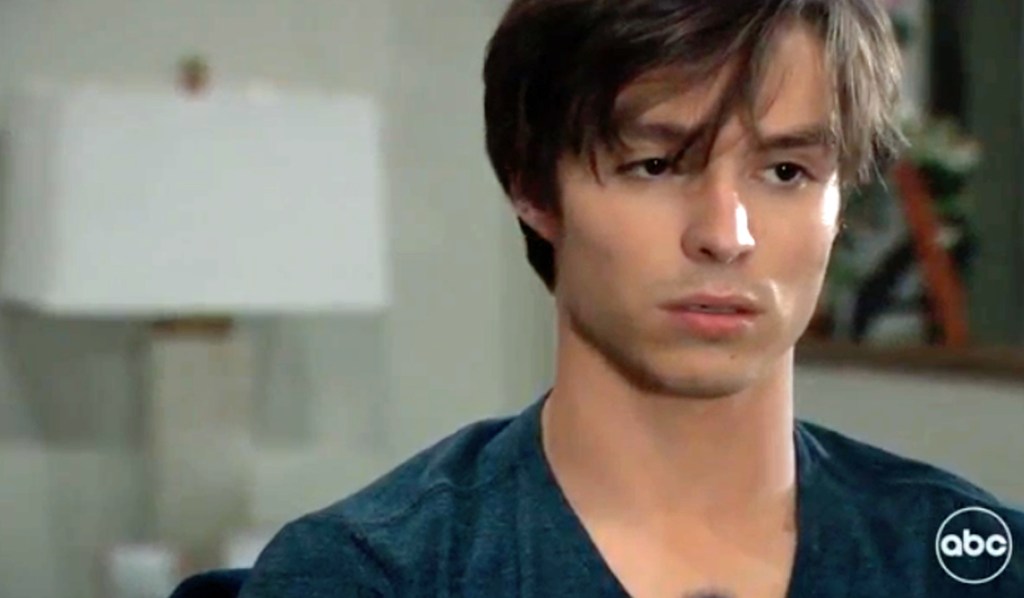 At Charlie’s, Esme smiles as she reads about Trina’s arrest on her phone. Nikolas enters and is glad to see her in a better mood. She thanks Nikolas for his kindness, especially given what she’s done to him and Ava. Nikolas admits he still doesn’t trust her, but he also knows this break-up with his son may not be permanent. He needs to know she’ll be good for his son, and that she loves him. Esme feels she’s proven that, but it still is too late. 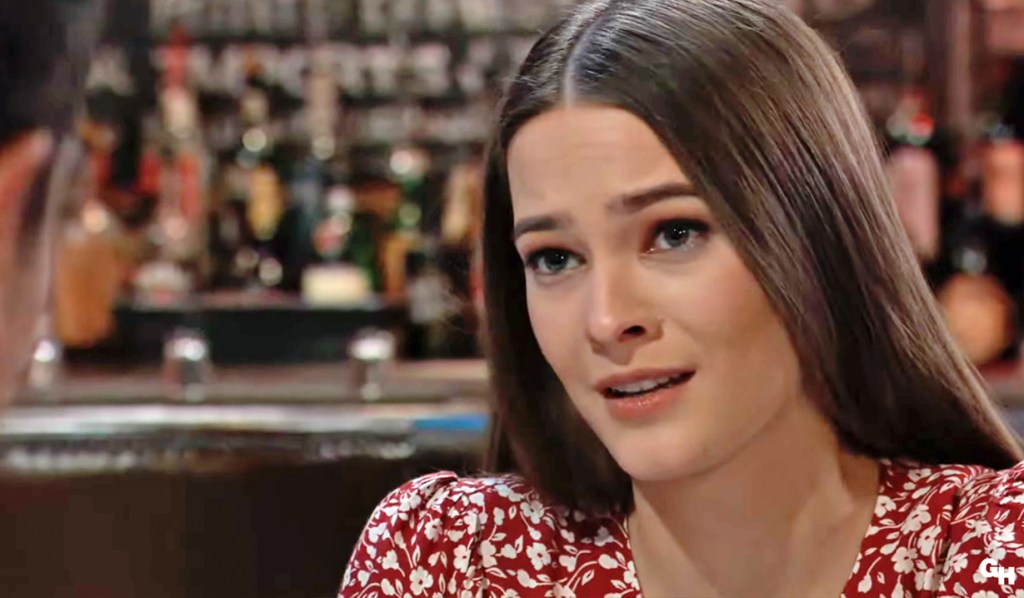 Esme cries that everyone is blaming her for Joss and Cam’s sex tape, including Spence, when it was Trina’s doing. She shows him the article on her phone. He wonders if Trina is out of Spencer’s life, will it bring her and Spencer back together? Esme notes it could have before… Nikolas asks what is it? Esme says she needs a minute to get some air and rushes out. Outside, Esme smiles at her performance. 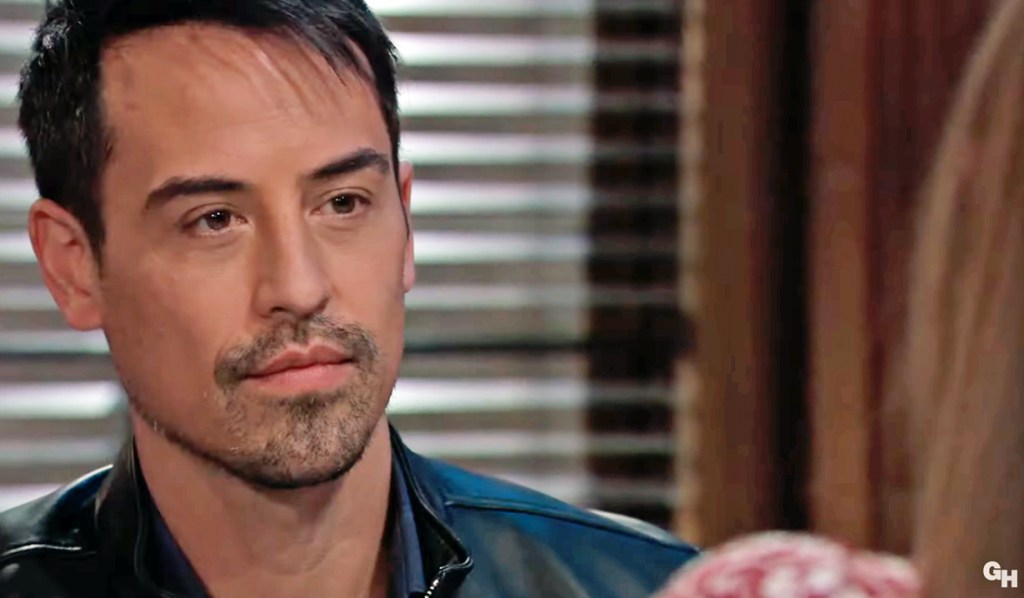 Sam arrives at her mother’s and is shocked to find Harmony there. Harmony makes herself scarce so they can talk. Alexis tells Sam she’s just helping Harmony out until she can afford a place of her own. Sam sees her mom has made up her mind, but asks her to consider that Harmony’s redemption act is too good to be true. As a former grifter, she worries that Harmony is working her mother. 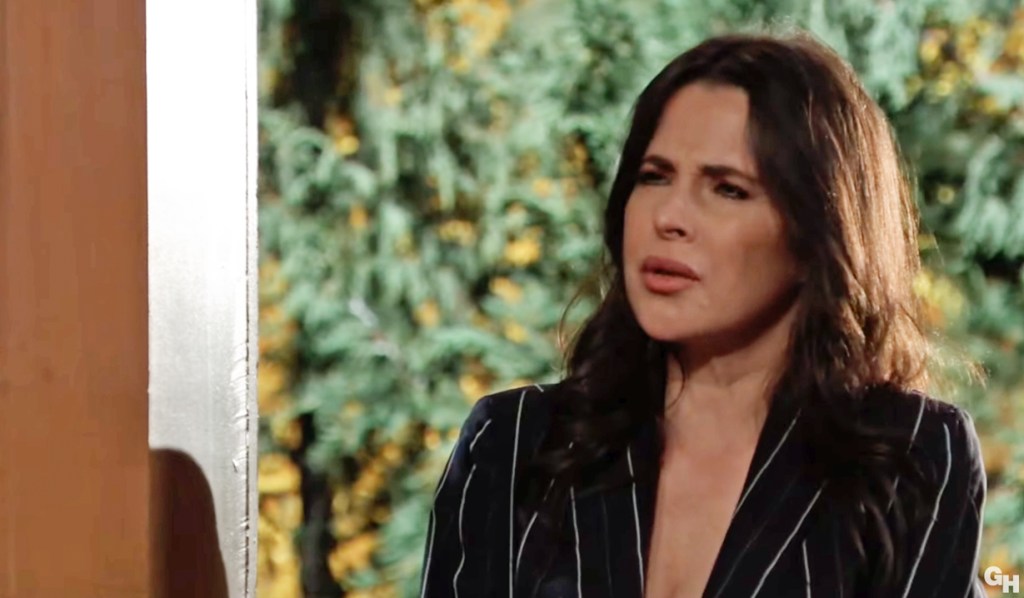 Alexis says Harmony is a friend who needs her help. Sam eventually heads out, and Alexis assures Harmony that her daughter doesn’t make her decisions. Alexis brings up how well Harmony knows her way around as if she’s been there before without her knowledge. Harmony admits she has. 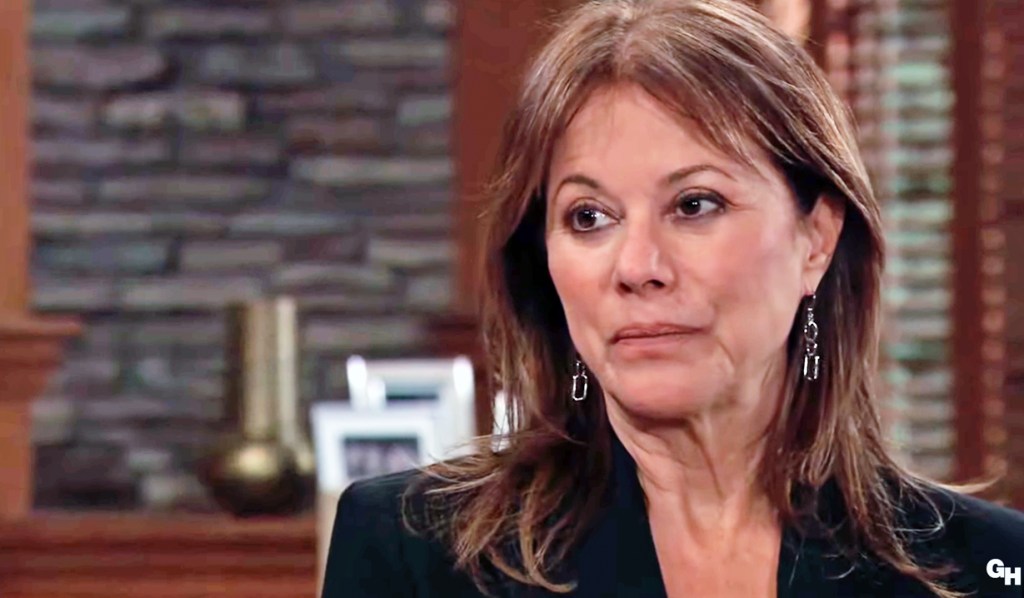 Harmony reveals Shiloh sent her over one day to speak with Kristina about Dawn of Day when Alexis wasn’t there. They had coffee, and there was a mishap with the coffee maker. She helped Kristina clean up and that’s how she knew where the cleaning supplies were. She was just so ashamed and didn’t know how to tell Alexis. Alexis has to get to work but says they’ll talk about this later.

Alone, Harmony flashes back to August of 2020. We watch as she broke into Alexis’ house at night, and headed upstairs where Alexis and Neil were asleep in bed. She removed a syringe from her coat and injected Neil. In the present, Harmony shivers at the memory. 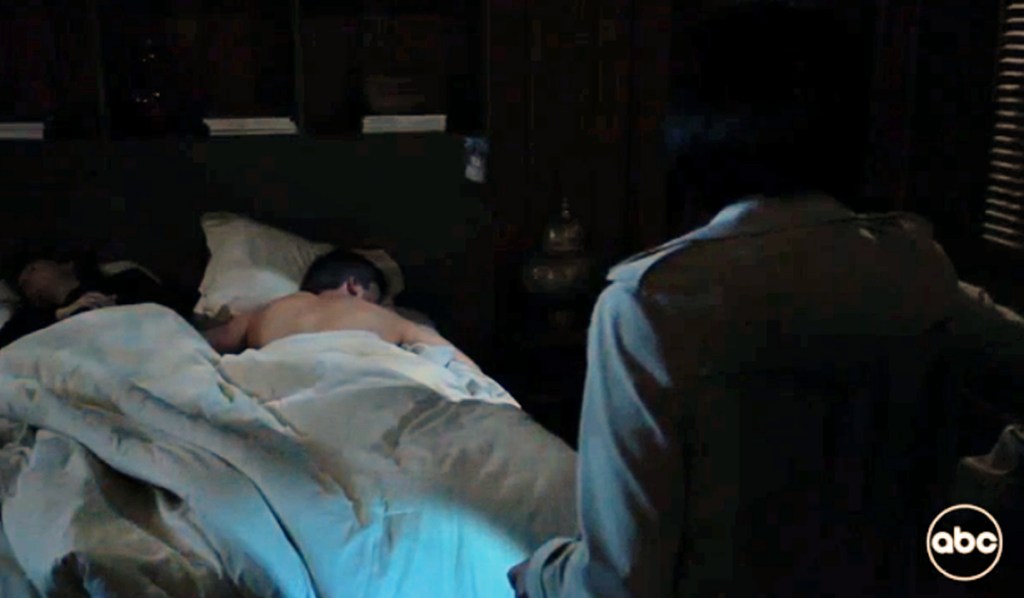 At the Metro Court, Carly and Ava discuss visitations with Avery. As Ava brings up the terrible sex tape scandal, Sonny arrives, hears what they are talking about, and reveals Trina’s been arrested for the video. Both Ava and Carly refuse to believe Trina did this, and they both immediately guess that Esme set her up. Ava storms off to make sure someone pays for this. 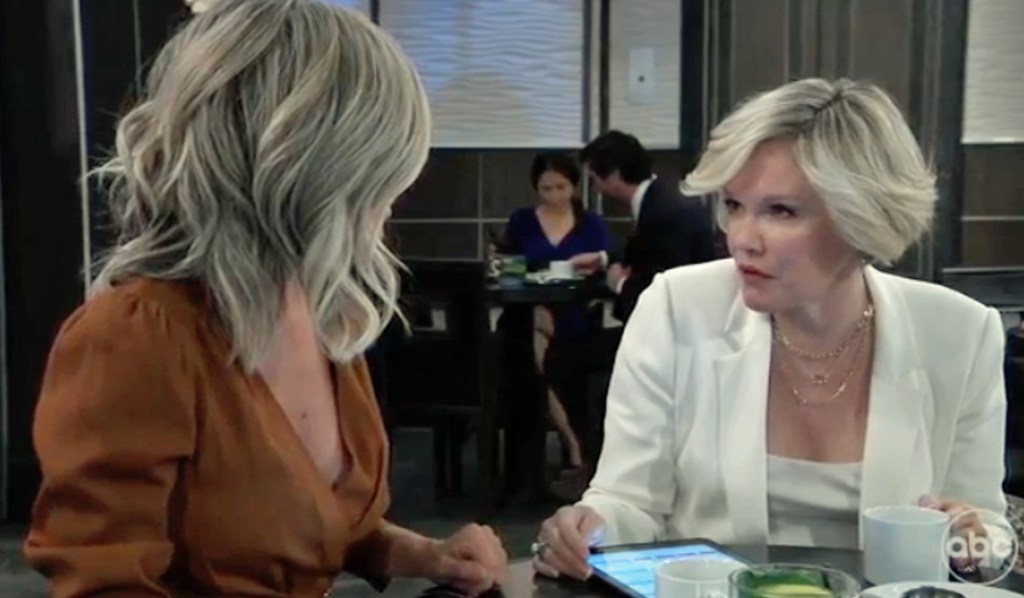 Sonny tells Carly that if Dante hadn’t told him about the tape, then he would have found out about it from The Invader article. Carly explains it was Joss’ decision who to tell. Sonny says Joss will always be like a daughter to him, and someone is using that video as a weapon against her. Sonny won’t let the person who is behind this get away with it and storms out. 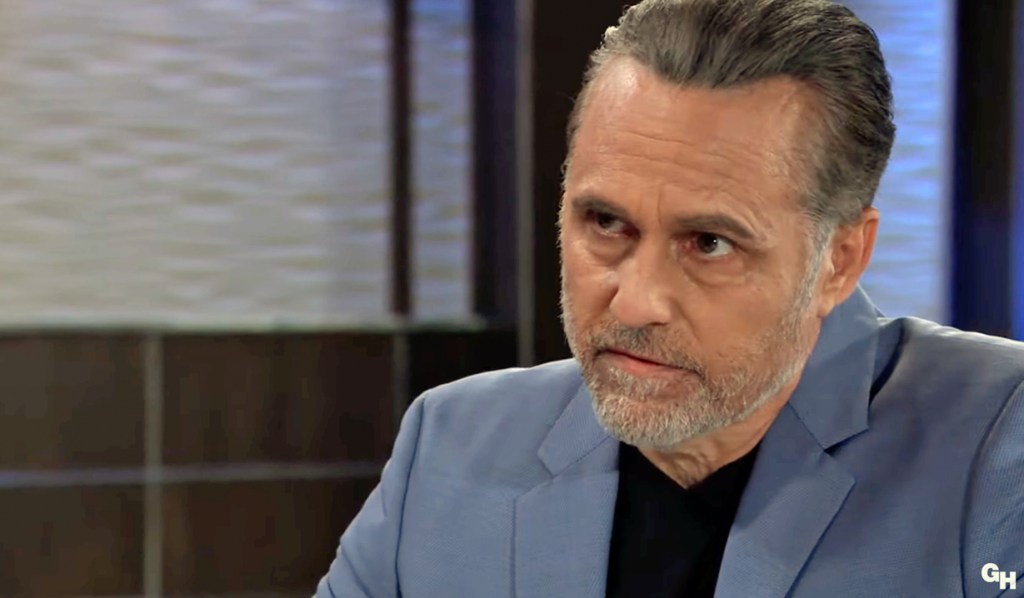 Sam arrives as Sonny heads out. She recognizes the look on his face and knows someone is in trouble and will suffer. Carly brings her up to speed on what’s going on with the sex tape. Carly wishes Jason was still there, and they discuss Monica wanting to declare him dead to help his children. Neither knows how to say goodbye to Jason, but Sam says they have to try and move on. Sam says if Carly can find her strength, then she may be able to move on from Sonny the way she did from Jason. 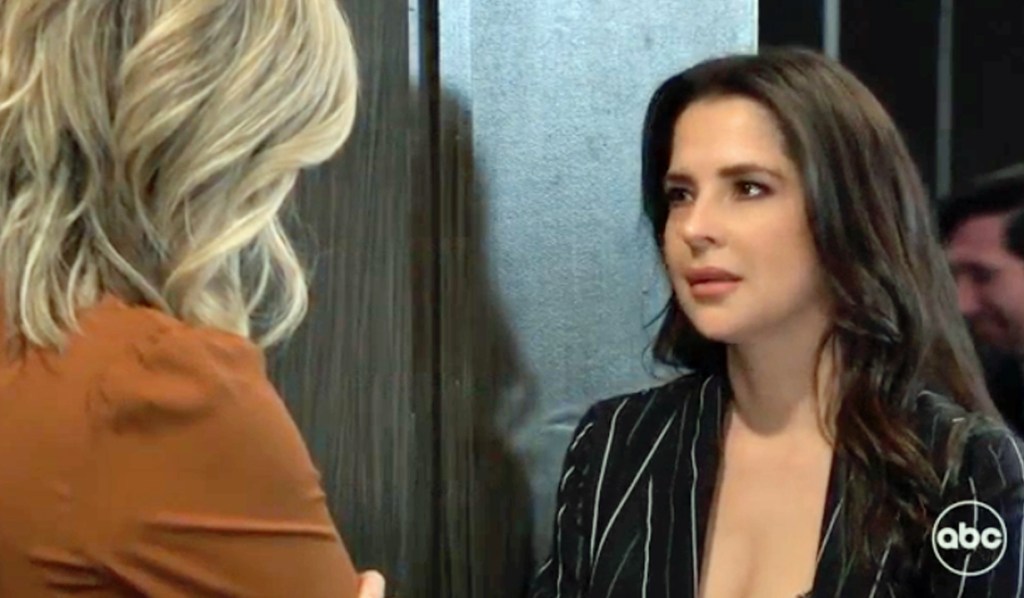 At the PCPD, Trina is taken into a room to speak with Jordan. Jordan wants to walk her through what is next, including her arraignment and her plea. Trina plans to plead not guilty because she’s not. Jordan can tell Trina has something she wants to say about all of this and asks what it is. Suddenly Ava bursts in and exclaims she’ll say it, ‘”Jordan has the wrong person!” 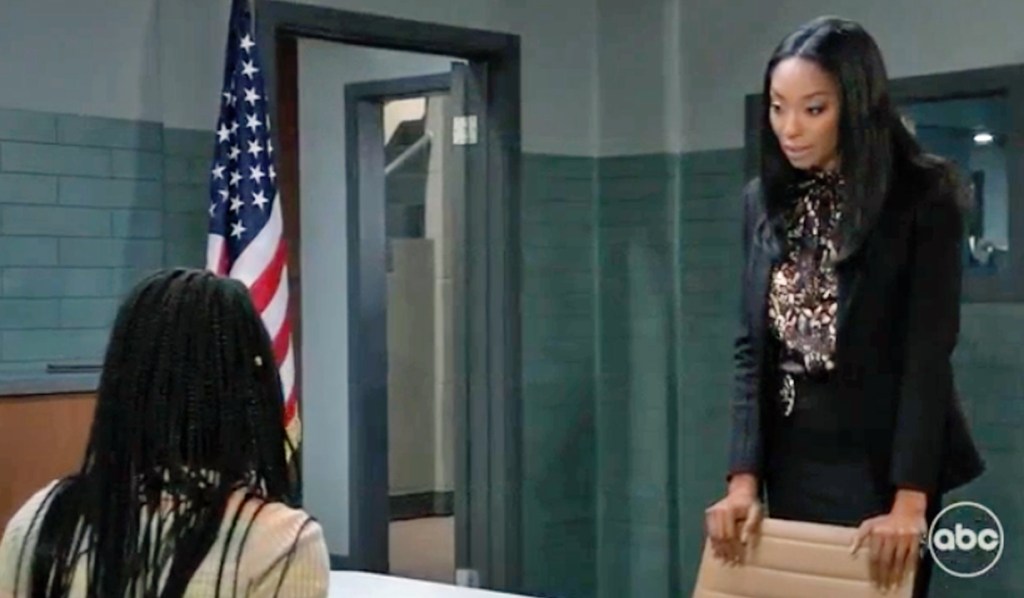 Jordan leaves Ava and Trina to speak. Ava tells Trina how sorry she is this is happening, and she will do everything she can to get her out of there and clear her name 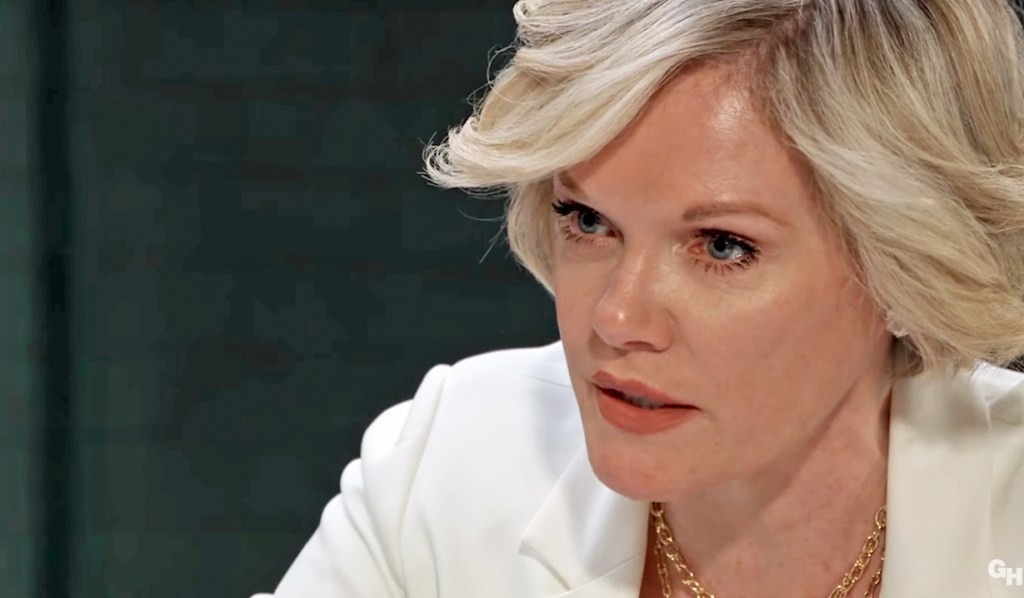 In the squad room, Jordan calls Laura and asks her to stop by the precinct. Laura asks if there is trouble. Jordan guesses she hasn’t seen the paper.

Back at Laura’s, she departs after Jordan’s call. Alone, Victor asks Spencer what is going on with him and Esme. Spencer explains they broke up, and Esme has hurt his friends. After some prodding, Spencer reveals that Esme may be pregnant. 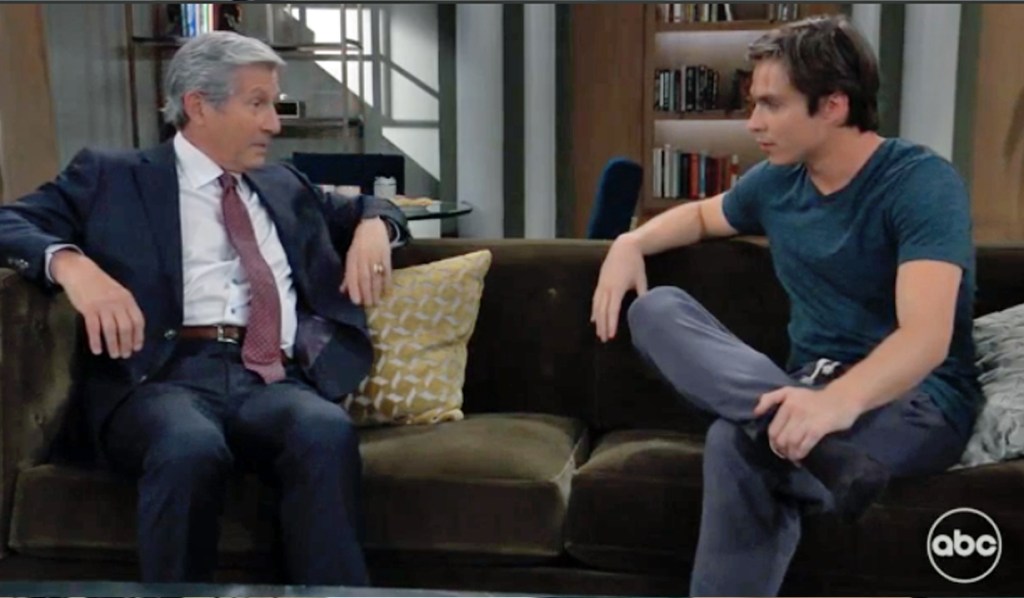 Victor chuckles, “Is that all?” Victor says if he’s the father, then their family has ways to pay her off. Victor thought he was upset about his friend that works for Ava being arrested. Spencer looks the article up and is stunned. Victor sees himself out so Spencer can process this. Spencer recalls Esme pushing him to leave the cabin before he could check on Trina the night of the party, the confrontation they had in the car on the way home, and Esme refusing to answer whether she made the tape. 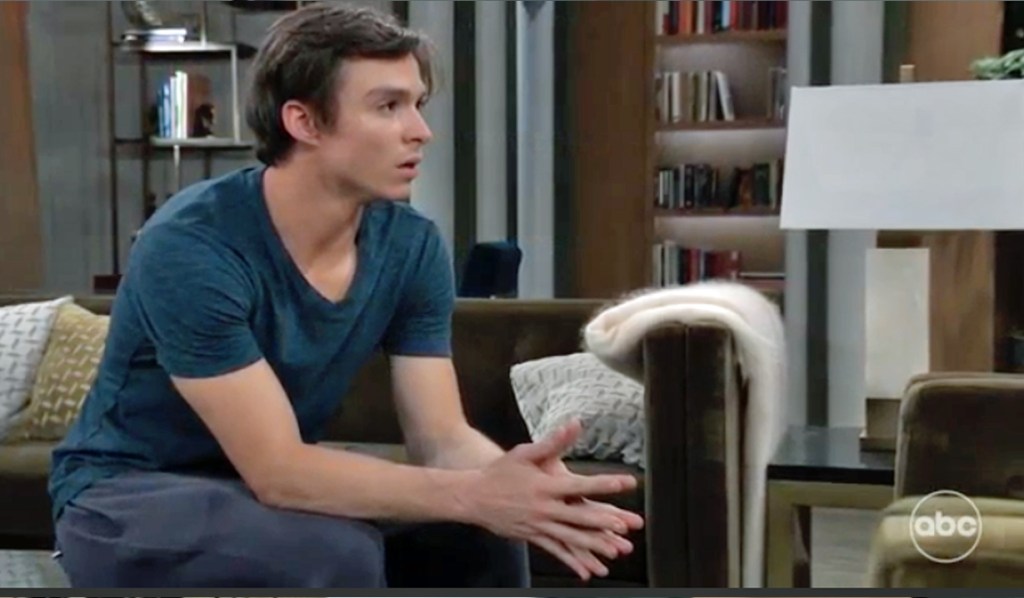 Back at the station, Ava asks Trina to tell her what happened, and Trina explains about the second phone that was placed in her bag. Ava knows it was Esme, and Trina agrees. An officer lets Ava know her time is up. Ava promises she’ll get Trina out of this and says those who know her believe in her innocence. 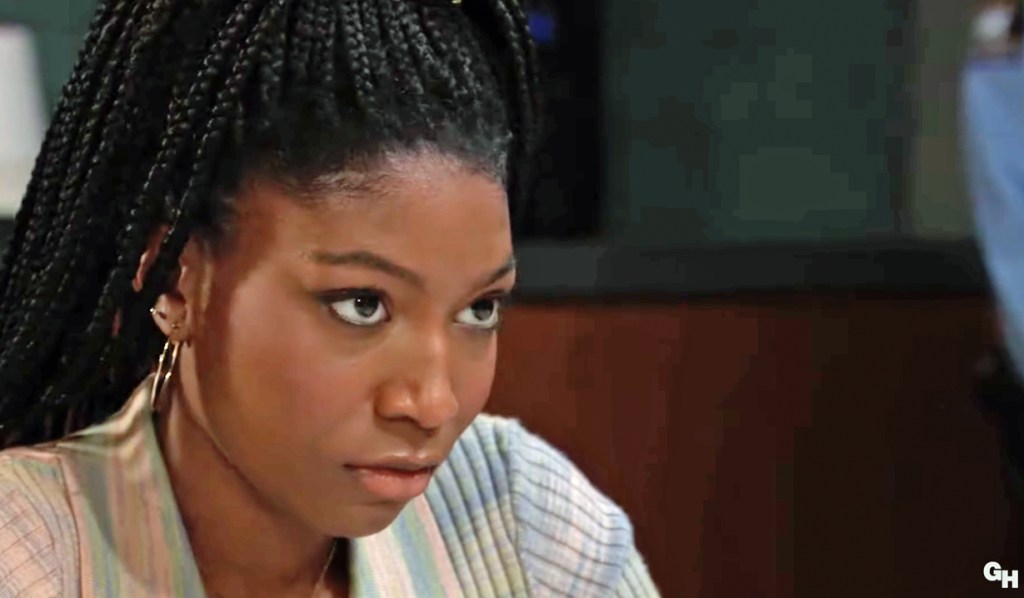 Laura arrives, has seen the paper on the way and knows what has happened. She tells Jordan there is no way Trina could have done this. Jordan explains there is more, and Spencer may be involved. Suddenly Ava storms by, tells Laura that Trina is innocent, and rushes out.

Spencer arrives, and Jordan allows him to see Trina. In the interrogation room, Spencer is flustered and says he was just starting to believe Esme was the one who made the tape, but the evidence points to her. Trina insists it was planted. Spencer asks, “Why did you do it?”

Sonny returns to his office at the restaurant and calls Brick. He asks him to work with Spinelli to locate the evidence on who did this to Trina. Ava storms in and tells Sonny that she just saw Trina at the station and she didn’t do it. Ava accuses Esme. Sonny says Carly believes that too. Ava says if Carly and she agree then it must be true. Sonny reveals he’s on it. 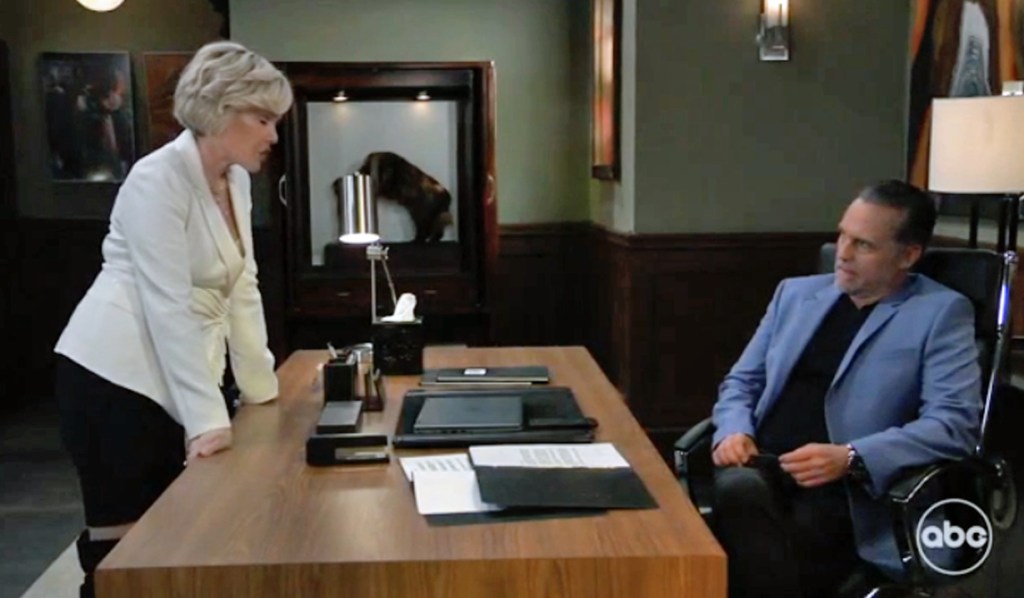 Outside of Charlie’s, Esme sits on a bench and reads the article on Trina’s arrest and laughs. Suddenly she’s approached by someone and looks stunned.

Later, Victor arrives at Charlie’s to see Nikolas. Nikolas asks if he saw Esme outside. Victor did briefly and notes she was getting into a car with someone.

Back at Sonny’s office, Esme is brought in and forced to sit in a chair and face Sonny.

On the next General Hospital: Sonny urges Esme to confess. Spencer tells Trina that he wants to believe in her. Scott meets with Portia about Trina’s case. Sasha and Brando return to town. Brook Lynn tells Lucy that her answer is no.

Before you go, take a look at the best slappers on soaps in the gallery below. 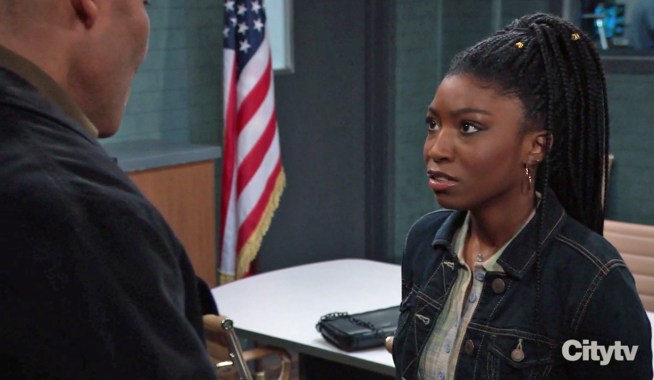 Trina Tells Spencer She’s Done With Him After He Reveals [Spoiler] — Plus, Nikolas Comes to Esme’s Rescue Again 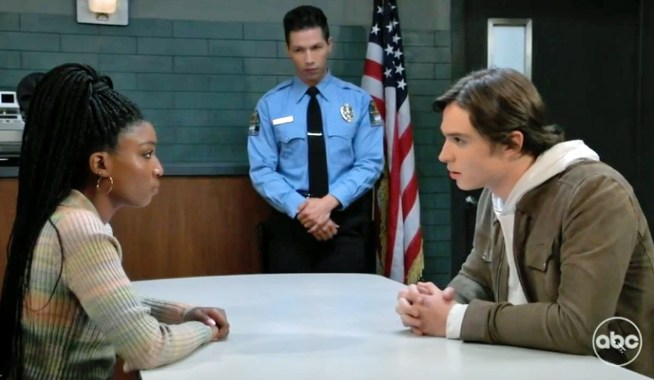