Brook Lynn Panics to Maxie Over the Risk of Them Being Exposed — Plus, [Spoiler] Is Arrested

Thursday, January 6, 2022: Today on General Hospital, Olivia has a heart to heart with Carly, Sasha returns to work, and Ava gives Nina her spin on Sonny's feelings. 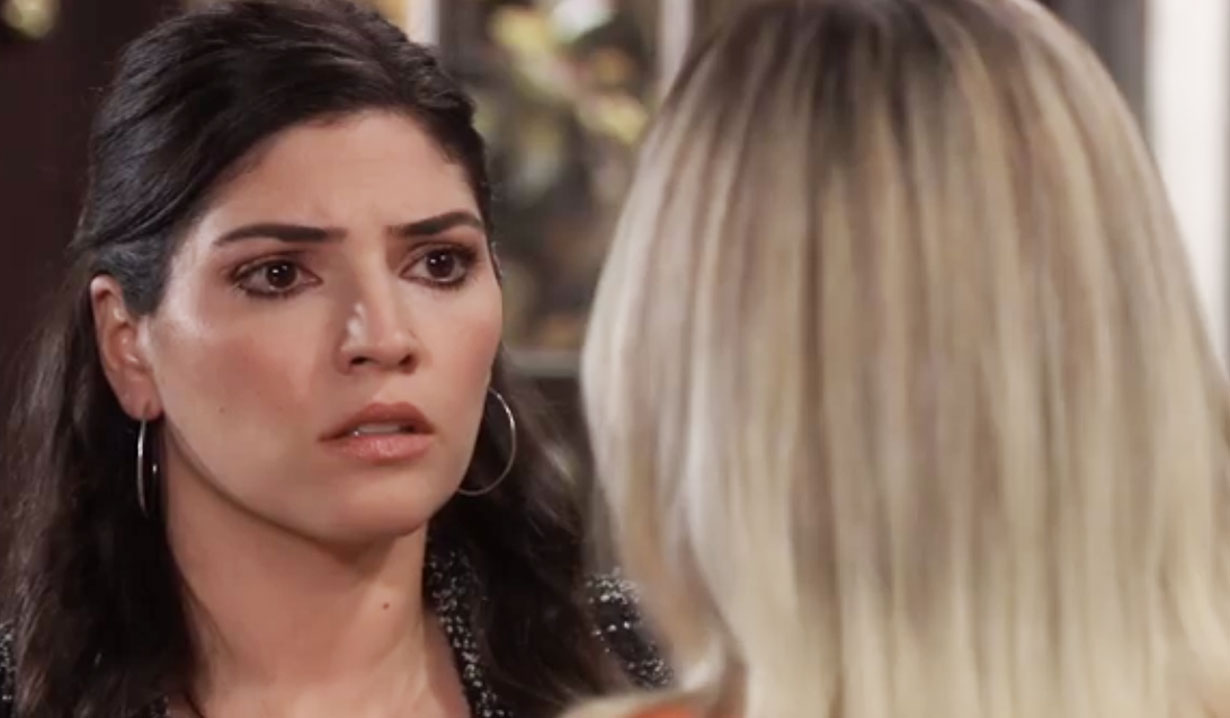 At the Quartermaine estate, Tracy sarcastically compliments BLQ on her mothering skills. She brings up Felicia’s fears that Maxie is using Bailey as a substitute daughter. BLQ doesn’t see the harm. Tracy never thought she would see her as the maternal type. “People change,” BLQ says. Her grandmother thinks maybe they just get better at hiding who they are.

At the Metro Court, Alexis and Sam continue talking about her new job working for The Invader. Alexis admits that it terrifies her but she likes that. As they toast to their bravery with coffee, Ned joins them and congratulates Alexis on her new job. He informs them that Luke was killed in an accident. They’re surprised that he heard this from Tracy. Ned says Luke’s death hit her hard. They’re shocked when Tracy blows in. Ned reminds his mother she’s wanted by the police. 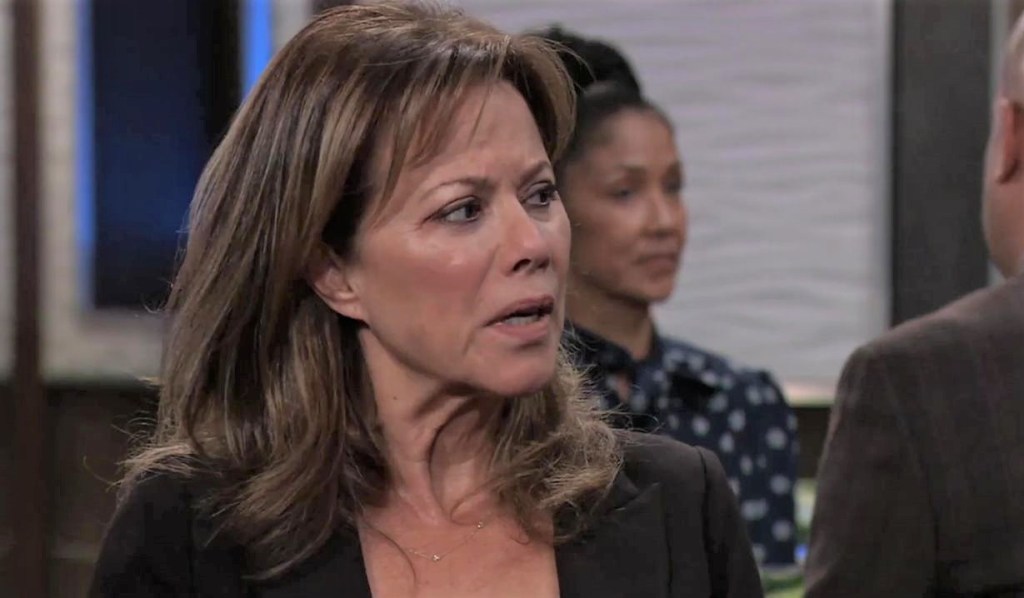 Alexis leaps up to say she’s been inspired by her to write an article about privilege and the abuse of power. “You want me to go to prison? I’m already in a house with Monica,” Tracy snipes. Alexis starts lecturing her and Tracy points out that the disgraced lawyer has failed her way to the top… or slept her way there. Ned ushers his mother away. Sam tells her mother that Tracy needs to pay for what she did to her.

Gladys is glad to finally see Brando again in person. She’s sorry for sending him so many messages but it’s only because she cares. Losing Liam broke her heart. When he explains Sasha couldn’t make it, she surprises him by showing up. 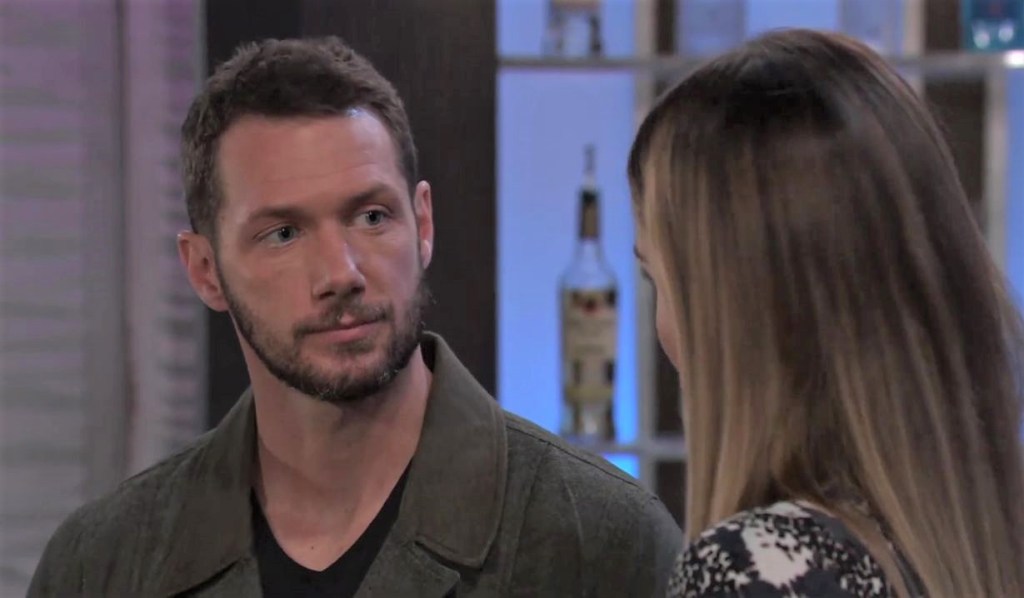 When Gladys steps away, Brando tells Sasha he’s glad to see her out of her apartment, even if it means spending time with his mom. She can’t stay. It’s a big day for Deception. They are launching their IPO and she thinks it’s best if she gets back to work. She can’t stay home staring at her walls and being reminded of Liam anymore. If Brando is back at the garage, she can get back to work herself. They exchange I love yous and she walks away.

Sitting at the bar, Gladys talks to Brando about loss. She’s been listening to podcasts about grief and tries to give him advice. She’s giving him space until he’s ready to talk. He appreciates that. His mother tells him a woman can’t wallpaper over the hurt that Sasha has suffered, no matter how hard she tries. She hugs her son and tells him how proud she is of him for letting himself hurt.

More: Why were skeptical about Luke’s death

Ava drops by Nina’s office at Crimson to ask if it’s true that the charges against her were dropped. She throws her arms around her friend and asks what Scott pulled out of his hat to get her off. Nina doesn’t take any pleasure in this but Ava happily does. After she gets the explanation of what went down at the hearing, Ava wishes she was there for a front-row seat. 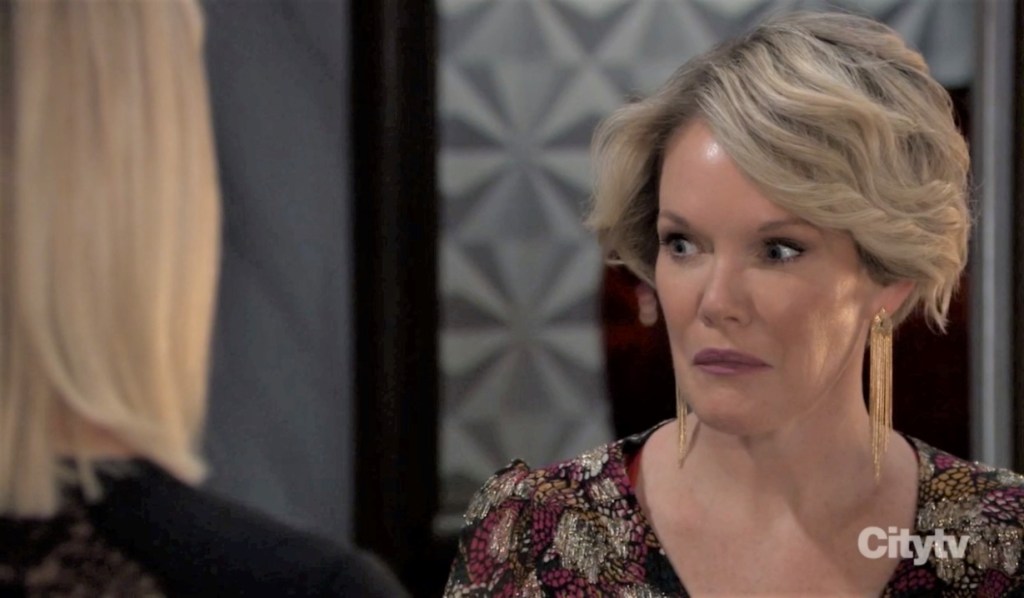 Jerome is amazed to hear that Sonny told the truth about his feelings on the stand and Carly walked out on him. Ava’s sure it was hard on her when Sonny went after Carly to live happily ever after. Although, judging by Nina’s face, she wonders if there is more. Nina admits that she saw Sonny drunk last night and got him to his penthouse safe then left. “You really love that guy, don’t you?” Ava prods. Her friend says they are back in reality. Ava points out that Sonny is not stuck between the past and the present; he’s stuck between Carly and her. She’s sure that Nina knows Sonny can’t shake his feelings for her. 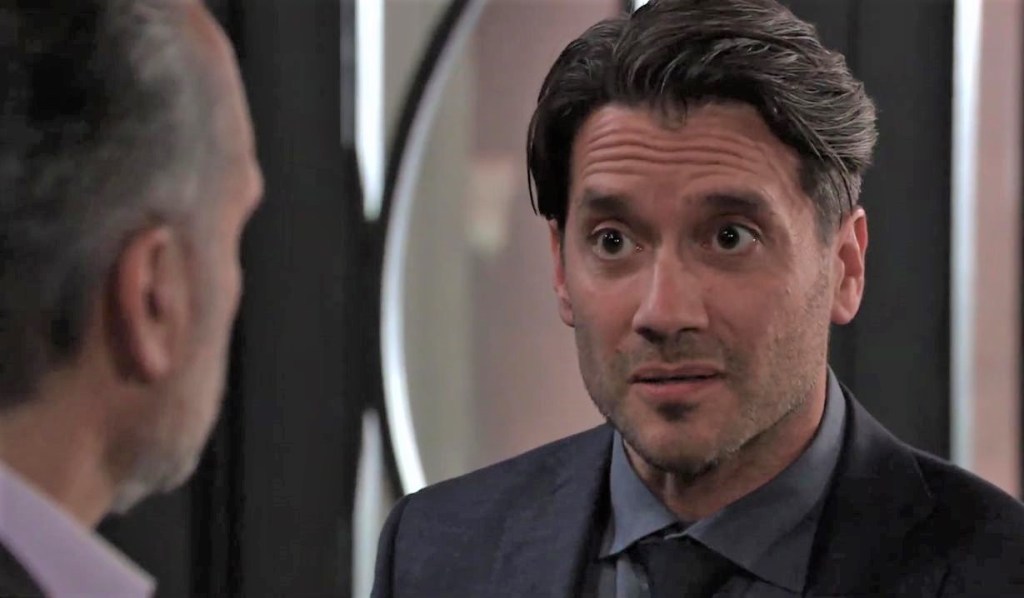 Dante drops in on his father at his penthouse to find out what happened after he left him on New Year’s. Sonny explains that Nina dropped him off but she didn’t stay the night. “Did you want her to?” asks the cop. His father admits it would have been easy to have her stay and think about what they had in Nixon Falls. Carly brought him back to himself and who he wants to be. He wanted to forget Nina but he can’t get rid of his feelings for her. The whole thing is like Brigadoon. Dante senses that what he and Nina have isn’t a magical imaginary place but still real. Sitting down, Sonny explains that his love for his family is real. He had a recurring dream of a blonde woman and eventually realized she was Carly. The thing with Nina doesn’t really matter but he doesn’t know how to make Carly believe that. His son suggests he tell her what he just told him. Sam calls Dante, asking if he can come to the Metro Court to make an arrest. 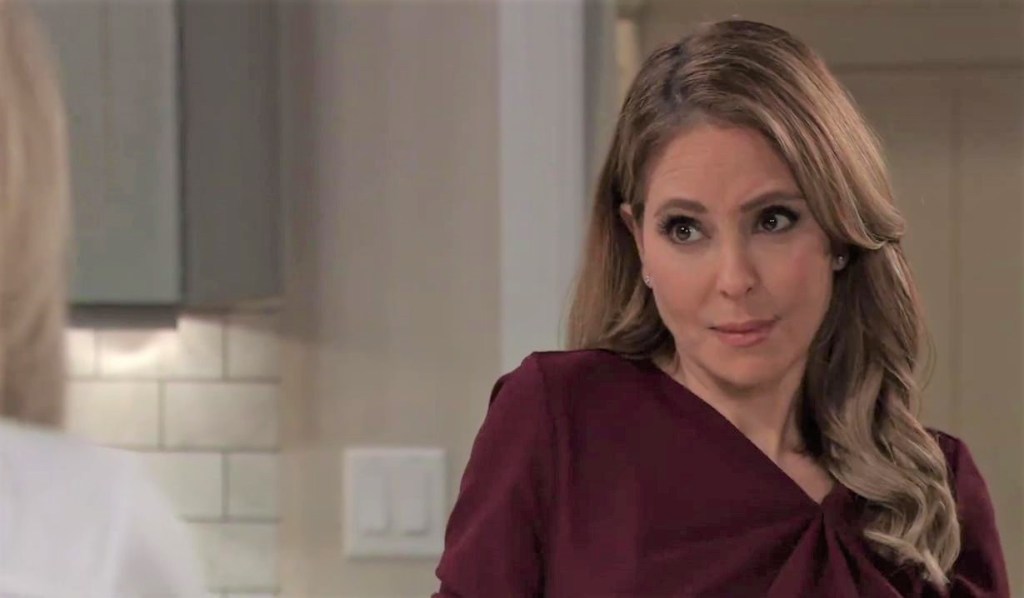 At the Corinthos compound, Carly assures Avery that Sonny isn’t going away again like he did last time. Olivia bustles in and Avery runs upstairs to see her sister. Liv asks Carly why Nina skated on her charges. “Because she fell in love with my husband and he felt the same way,” Carly explains. Olivia makes excuses for Sonny. He may be a dog but Nina took advantage of him. “What did Sonny say when you told him about your feelings for Jason?” she asks. Carly admits she bottled up her feelings and chose Sonny, but he doesn’t seem able to do the same. Eventually, the topic turns to Olivia’s life. Carly is happy to hear that she and Ned are renewing their vows and he’s adopting Leo. Olivia is still getting used to her son being autistic. Liv urges her not to waste time like they did. They sob and hug and Olivia reminds her that Sonny died and came back to her. She asks if she can really expect Sonny to be completely there for her after all that’s happened when she can’t say the same for herself. Has she told Sonny how she still feels about Jason? Sonny arrives.

More: Will Lipton on Cam’s dark side 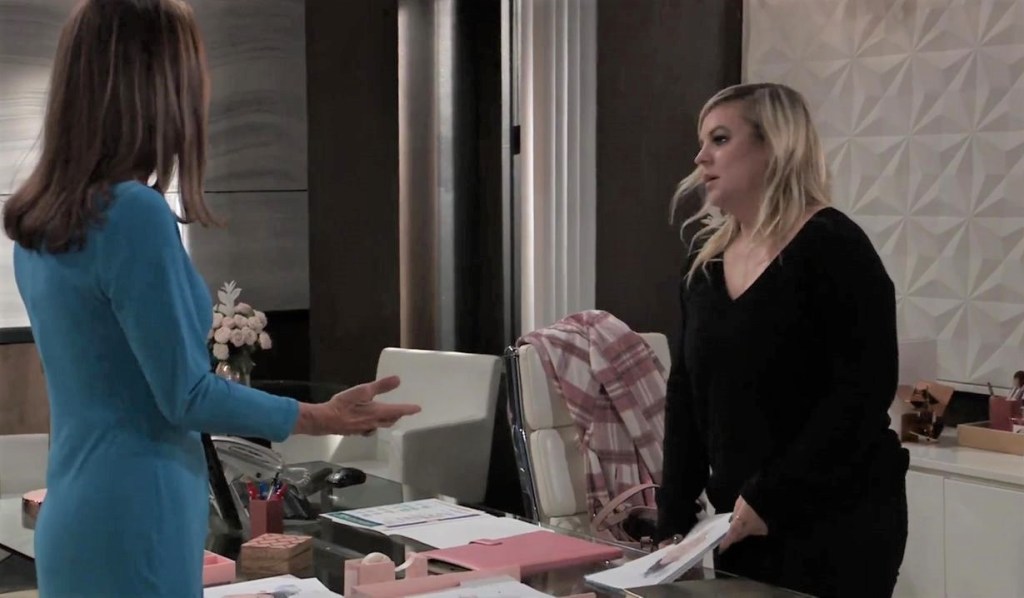 BLQ rushes into the Deception office and tells Maxie that Tracy knows the truth about Louise. Maxie suggests they try to bluff it out. Lucy calls them together to talk about their company going public. Coe volunteers to be the one who rings the bell at the stock exchange. The other women think it should be Sasha, who walks in and announces she’s back and ready to give her all. Her friends say it’s too soon for her to be there but she insists that grieving at home would be disrespectful to her son. As Sasha declares she’s ready for anything, the nanny comes in with Bailey. Sasha immediately gets emotional and then steps back, insisting she’s fine. BLQ ushers the child out and Sasha announces her make-up artist will be there soon. She steps out to freshen up. Lucy thinks that Sasha may be returning too soon but Maxie suggests they assume Sasha knows what’s best for herself.

In the bathroom, Sasha tries to talk herself up so she won’t let herself and her friends down. She puts on lipstick. She returns to the office and goes over details for the press conference with Lucy. Meanwhile, Maxie tells BLQ they need to come up with a plan to deal with Tracy before she blows their cover.

Back at the Metro Court, Tracy starts telling Ned about Bailey when Dante shows up and arrests her.

On the next General Hospital: Phyllis sets Nina straight.

Take a look at the Cassadine family through the years in the photo gallery below. 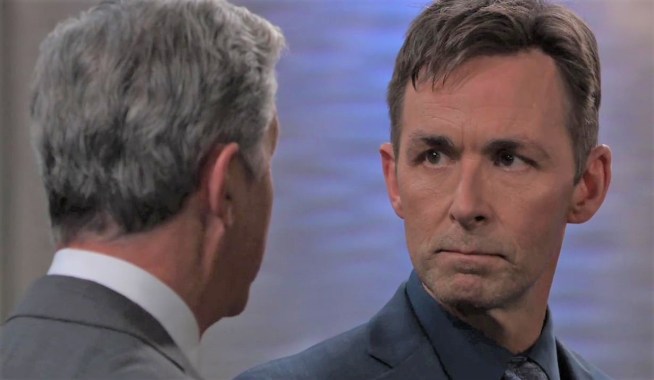 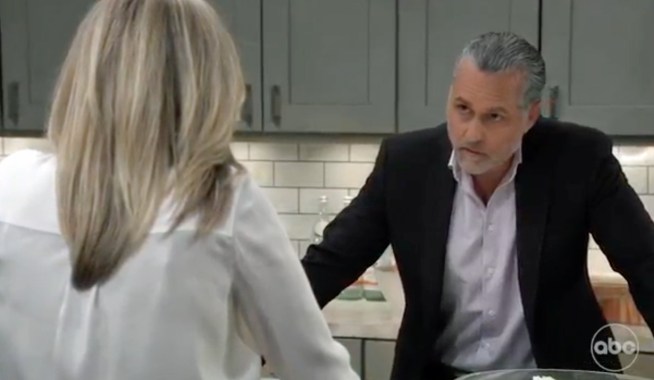