Tuesday, December 7, 2021: Today on General Hospital, Spencer opens up to Joss about Esme, Trina and Esme discuss the upcoming trip, and Willow tells Nina that she overheard her and Sonny. 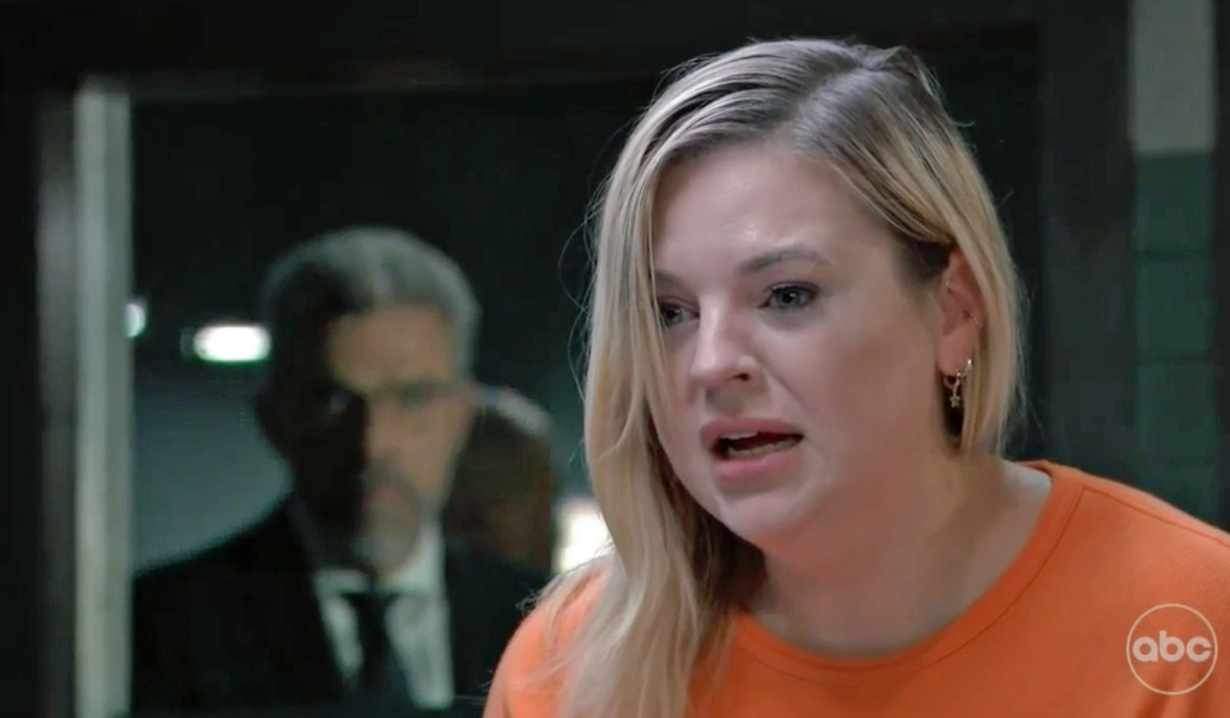 Spencer meets Joss at Sonny’s gym after getting her text. He wasn’t expecting it and tells her that he heard about Jason and is sorry. She knows Jason would hate her moping around and so she decided to punch something instead. He tosses her some gloves, and they discuss the trip as Joss throws punches. Joss isn’t sold on the trip and doubts it will improve her relationship with Esme. 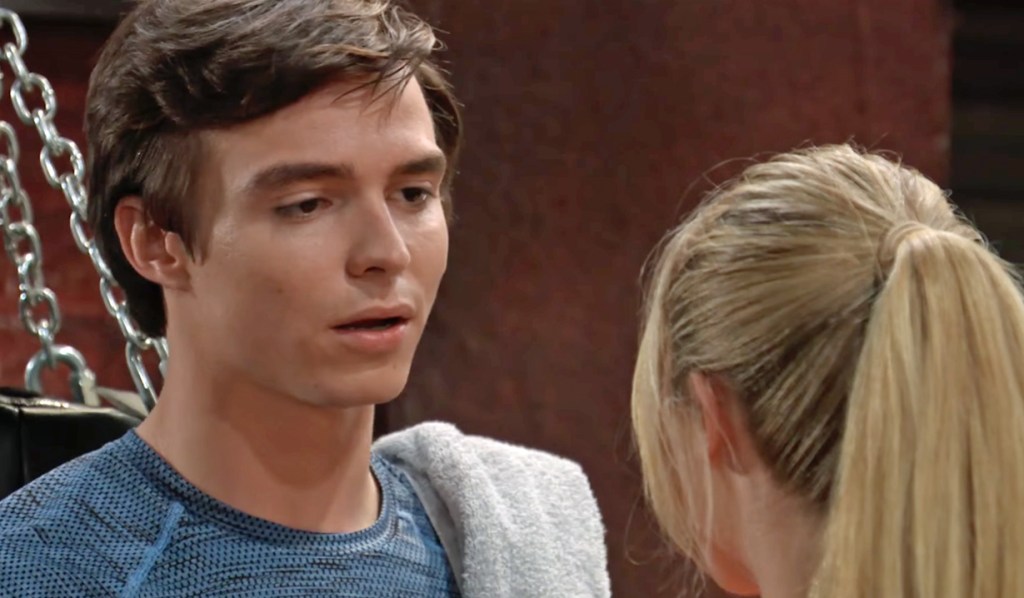 Spencer wants Joss to cut Esme a break. Spencer tells her that Esme lost her parents when she was young, and she was also one of the few who stayed on campus over the holidays. They bonded over their loneliness. He asks her to give Esme a chance to show her who she really is. Joss says, “I can definitely do that.” 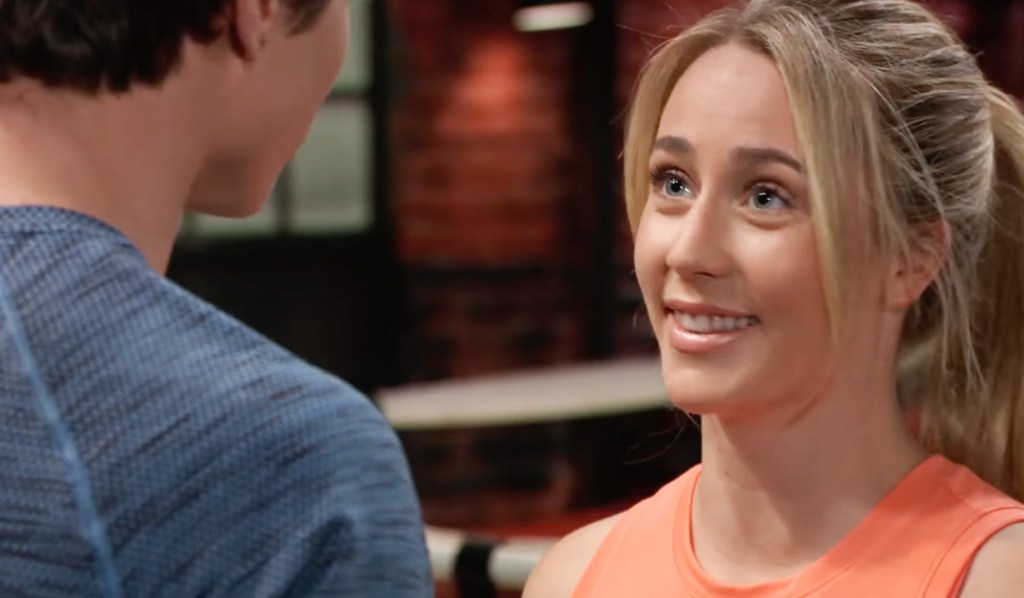 Esme runs into Trina at Kelly’s and joins her at her table, where Trina’s studying. Cameron stops over to take her order, and Esme notes they need to start planning their trip. Esme suggests a ski trip over winter break. She tells Trina she can bring a plus one instead of flying solo, but Trina isn’t seeing anyone. Cam says this is supposed to be a friends’ trip, not a couples’ one. He excuses himself to get back to work. 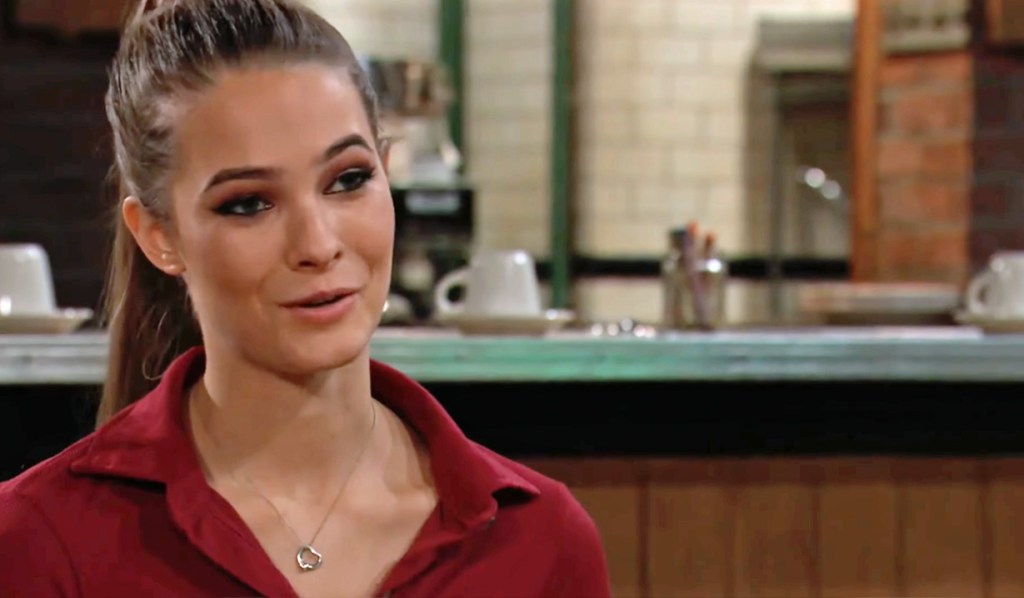 Esme tells Trina that not everyone has to be in a couple to be happy, and she was perfectly happy alone before she met Spencer. Trina asks, “And now?” Esme says she never intends to let him go. Cam’s shift ends and he says he’s going to meet Joss at the gym. Esme says Spencer is there and asks for a ride. 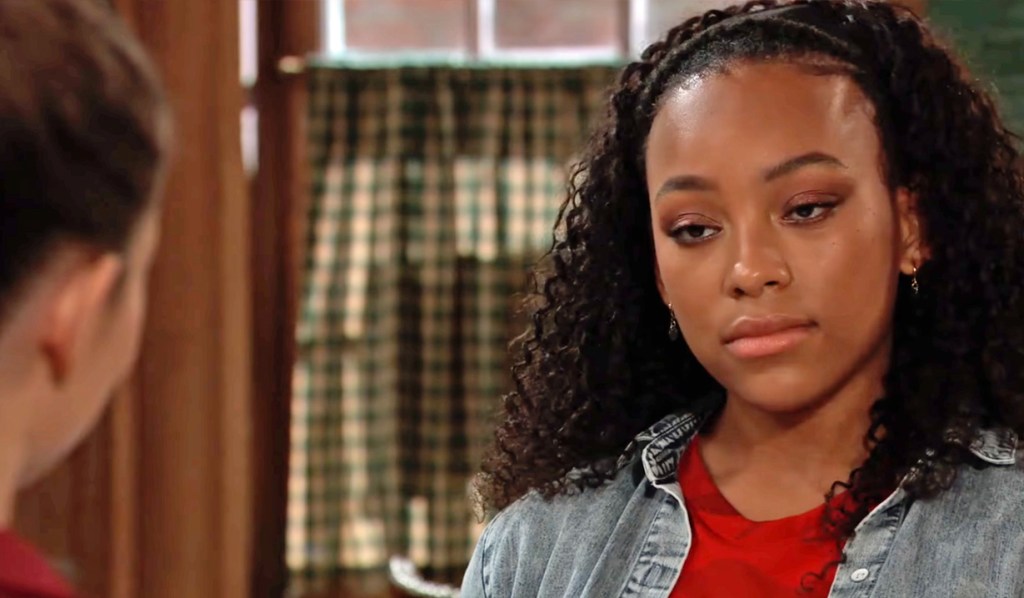 Spencer and Esme arrive at the gym. The trip comes up, and Joss says they should be able to use her Uncle Sonny’s cabin. Esme takes Spencer aside and is surprised that Joss is okay with the trip. Spencer says they had a talk and she’s agreed to give her a chance. Across the gym, Joss tells Cam that she’s not really cool with this trip, but thinks Spencer may be the one to be surprised when he finally sees the real Esme.

At the hospital, Michael connects with Carly and is sorry he wasn’t there when she found out about Jason. After embracing and talking about Jason, Carly asks about the New York trip. Michael fills her in on the fun Wiley had. 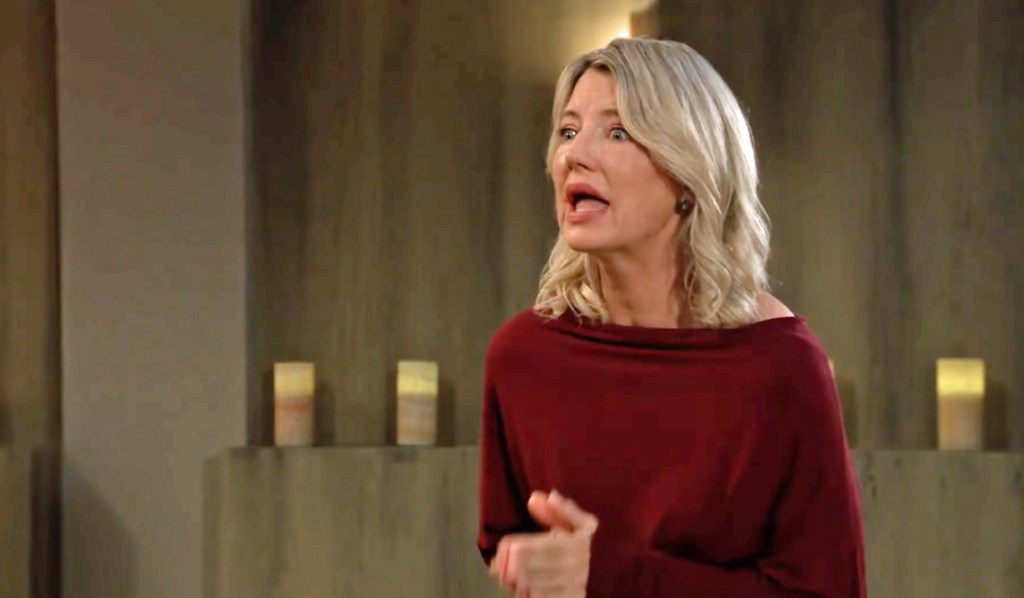 Nina only texted Sonny to warn him about Peter, and she doesn’t want to hurt him or Carly any more than she has. Sonny tells Nina that Peter won’t be causing any more trouble because he killed Jason. Nina regrets what her lies robbed him of. Sonny says they must move forward and live their separate lives. Sonny exits. 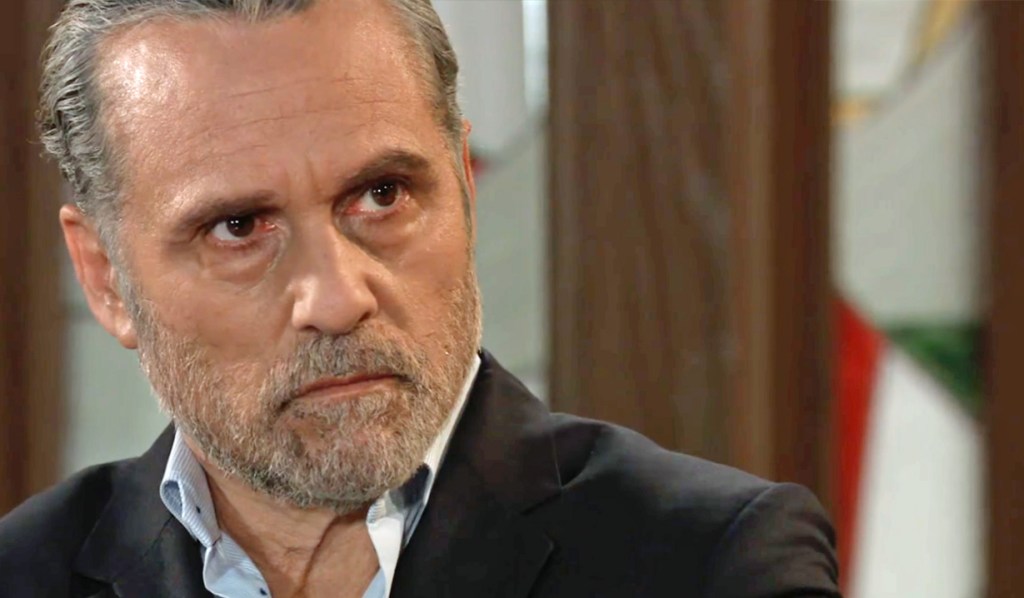 Carly and Michael continue to talk, and she fills him in on Brando and Sasha’s son. They decide to check at the nurses’ desk for an update and run into a troubled-looking Willow. They ask what is wrong, but before she can say anything, Sonny shows up. Sonny hugs Michael, and they discuss Jason. Sonny swears Peter will pay for what he’s done. 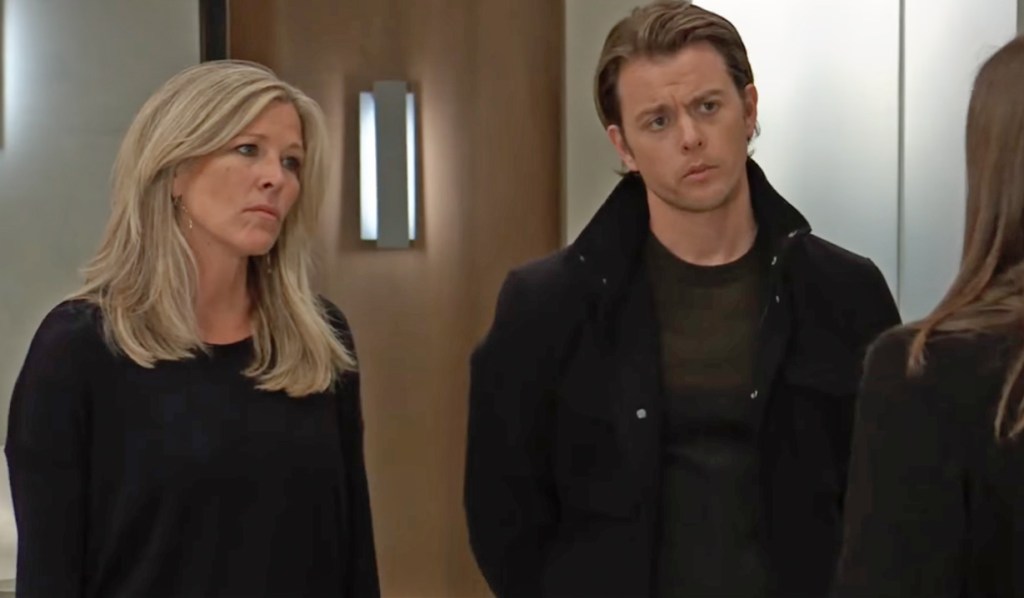 Michael and Willow later sit alone, and he again asks if she’s okay. Willow says she’s just praying for Sasha and Brando. He asks if she’s been in the chapel all this time. Around the corner, Nina overhears Willow explain she didn’t go in as to not disturb the people inside. Nina composes herself and walks around the corner to greet them. She says she’s only there for Sasha and not to upset them. She offers to wait someplace else, which Willow thinks is a good idea. 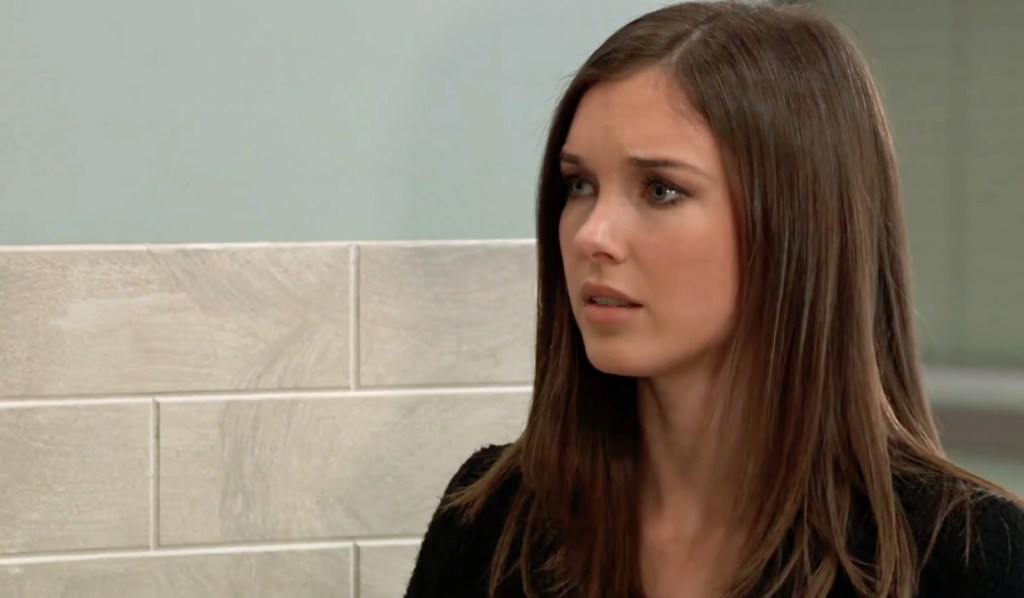 Elsewhere, Sonny tells Carly that he has business to attend to and to call him if there is an update about the baby. He takes off, and Carly wonders what could be more important than Brando and Sasha’s baby. She tells herself to count to ten and tries to calm down. Epiphany finds her and asks if she’s okay. She heard about Jason and tells her how sorry she is for her loss. Carly thanks her and says she will miss him every day. Epiphany encourages her to focus on her wedding day because she and Jason were so happy, and that love is hers to keep.

Carly joins Michael, and he asks about the tension between her and dad. Elsewhere, Willow runs into Nina and lashes out at her, and reveals she overheard everything between her and Sonny at the chapel.

At the station, Mac checks in on Peter, who is in cuffs in the interrogation room. The cop lashes out at him for manipulating Maxie and using her grief over Nathan to get closer to her. Peter swears he loves Maxie. Mac notes accidents happen in jail all the time. Peter points out if anything happens to him then Louise stays gone for good.

Maxie arrives in the squad room and tells Anna that she needs to talk to Peter. Anna thinks this is a terrible idea and asks why it is so important she sees him. Maxie explains that Peter’s taken so much from her and she refuses to be scared by him for one more minute. 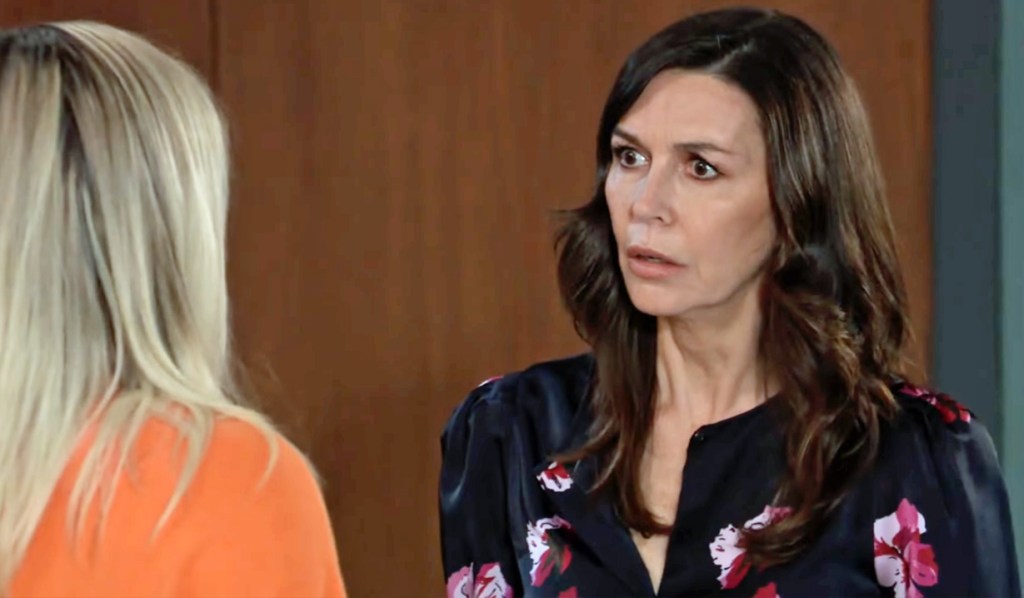 Mac exits and spots Maxie, and immediately realizes she’s there to see Peter. He refuses to allow it. Mac says he’s still playing games and claims to know where Louise is. Mac thinks he’s grasping at straws, and anything he’ll say to her will be a lie. Maxie says this is about what she has to say to Peter. He agrees to let her see Peter but wants her to exit the minute anything feels weird.

Maxie enters to see a thrilled Peter, who says he knew she couldn’t stay away. Maxie tells him to shut up and listen. Maxie informs him that this fantasy he has of them living together is not going to happen. She feels nothing but hatred for him for what he did to her and says he’s a murderer. He claims everything he did was out of his love for her and swears he can bring Louise back and they can be a family. She yells that he is going to spend his life in prison with nothing. She seethes, “You won’t have me, you won’t have Louise, there is nothing for you… Choke on it!” She calls him pure evil and regrets the day she met him. As she turns to leave, Peter suggests this is about Austin, who is clearly interested in her. She calls him insane and insists this has nothing to do with Austin. She tells him that even if she was dating Austin or the entire PCU football team, it’s none of his business. He coldly tells her there is only room for one man in her life, him! She responds, “Go to hell,” and storms out. 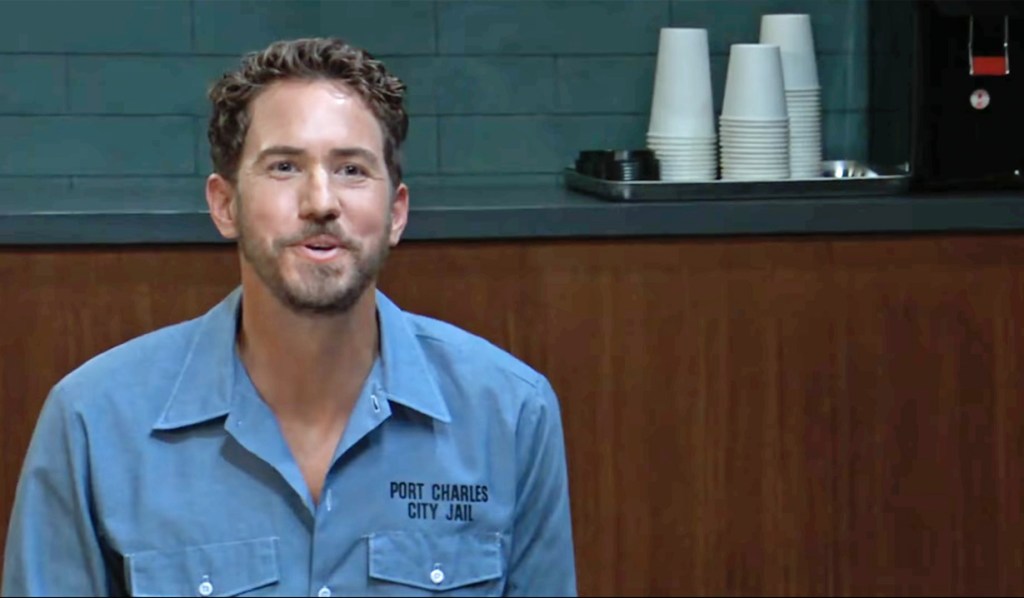 Later, Sonny arrives at the station and Anna intercepts him. She tells him that Peter isn’t going to walk away from this and is facing multiple murder charges. Sonny just wants Peter to know what’s waiting for him. Sonny gets his chance to face off with Peter, whose face drops when he sees Sonny enter the interrogation room.

On the next General Hospital: Maxie confronts Austin and tells him that she wishes he hadn’t done that. Sasha and Brando have a big question to ask Michael. Nina asks Willow now that she knows the truth what will she do? And Sonny tells Peter that after killing Jason all the rules go out the window.

Find out how the whole Cassadine bunch is related by perusing the Cassadine family tree in the photo gallery below. 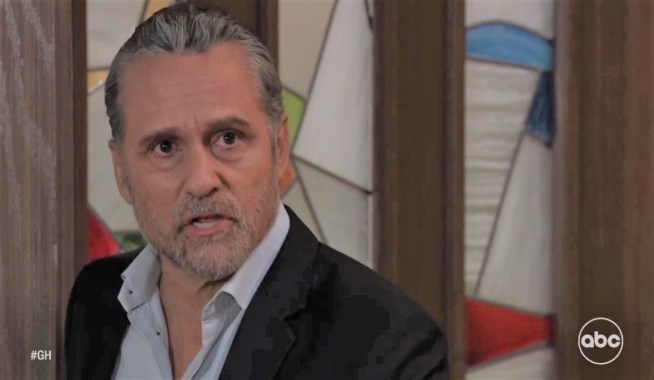 As Sonny Threatens to Kill Peter, [Spoiler] Struggles for His Life 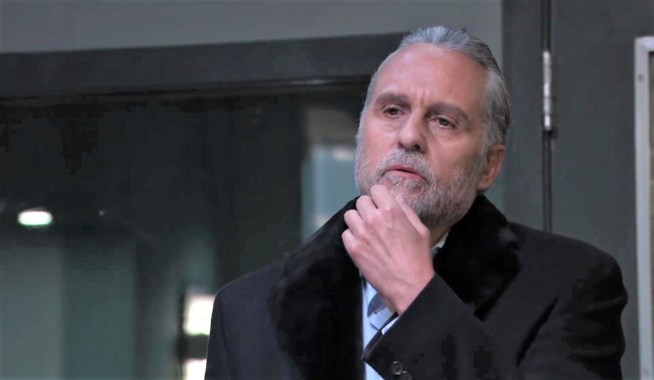