Monday, December 6, 2021: Today on General Hospital, Laura is shocked to learn Victor is alive, Michael learns that Jason is dead, and Peter taunts Nina and Carly. 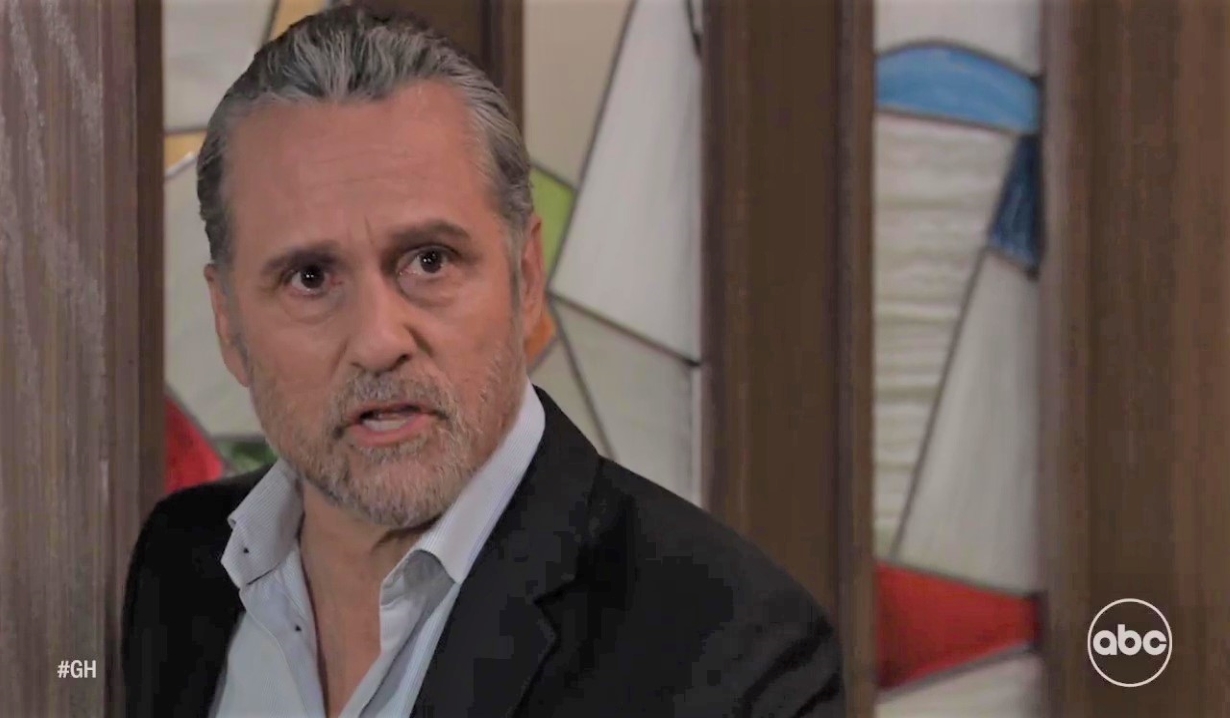 At the safe house, the guards burst in on Laura and Martin when they get too rowdy playing videogames. Once they clarify that Laura just gets over-excited when playing games, the guard suggests they try gin rummy next time. When they are left alone, Laura and Martin wonder if things have changed with Cyrus. He admits that he’s been grateful for their time together so he could get to know her. 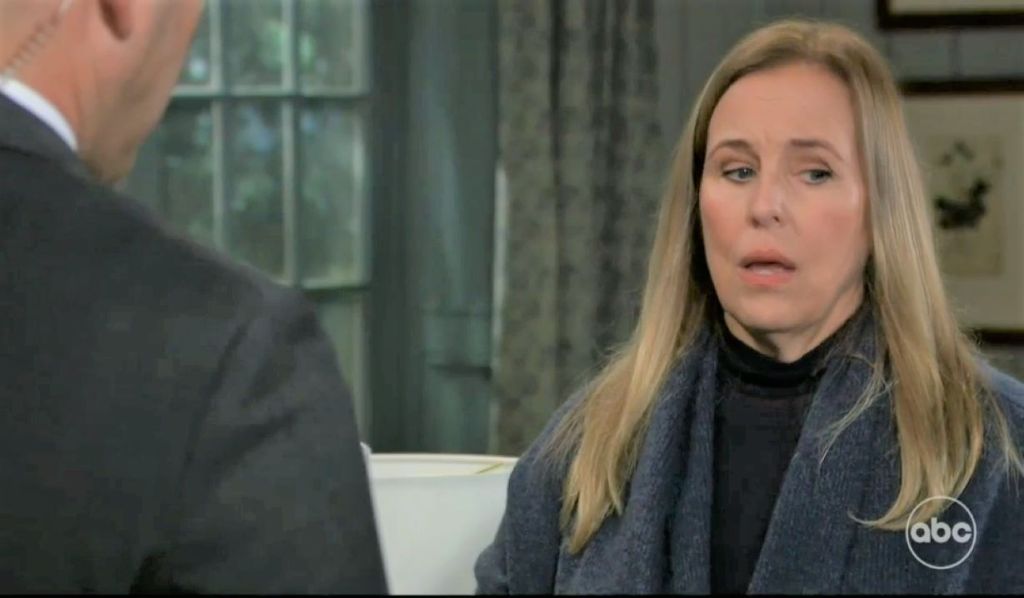 They play gin rummy and talk about family dinners. The guard comes in with the daily papers. He informs them that Victor Cassadine is alive and Peter has been released. When they are left alone again, Laura tells Martin that this is bad news. She’s determined to pack up and head back to Port Charles. She tells him that Victor is every bit as dangerous as Cyrus. He orders her to sit down, reminding her that they are in protective custody, and someone is out there waiting to kill them.

Outside, a woman shows up in the place of the regular cleaner and leaves her stuff at the door. She heads to her car and makes a call, telling someone the feds swallowed her story. 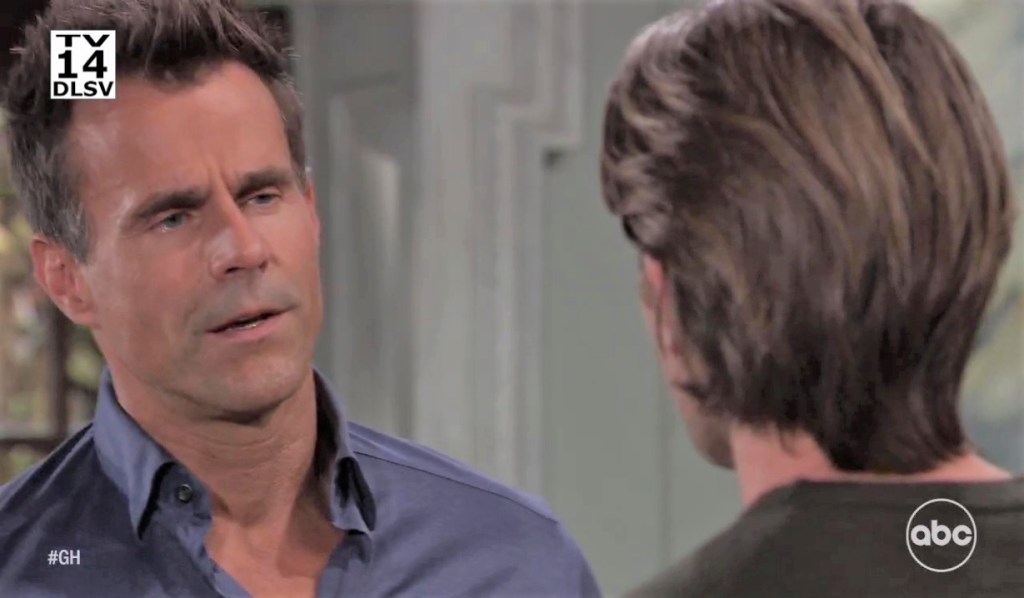 At the Quartermaine estate, Drew catches up on everything that has been happening with Chase, Brook Lynn, and the baby. Willow arrives in the doorway and is shocked to see Drew alive. Michael comes in next and can’t believe what he’s seeing either. Drew gives him a hug. They’re left alone and Drew gives him the news that Jason is likely dead. Michael needs to call his father. It’s ironic because he just got used to realizing he couldn’t call Sonny but then he returned alive.

In the foyer, Chase and BLQ tell Willow about Jason’s death. She’s more startled when the maid hands him the baby and calls him “daddy.” The detective explains that he’s always been Bailey’s father, but he just found out. BLQ says they are only friends and co-parents. “Like Michael and I once were,” Willow says. 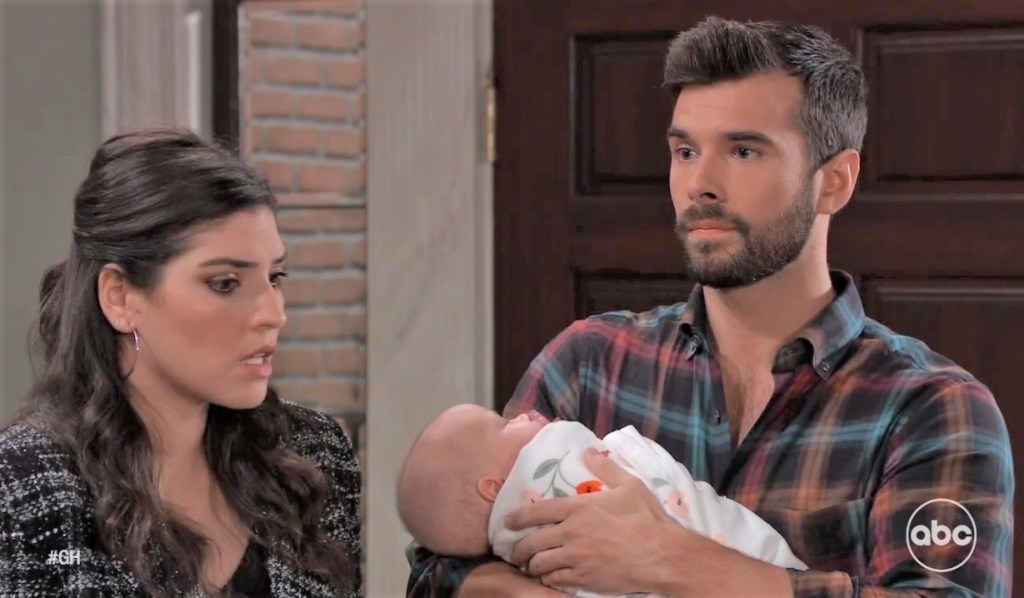 When Drew joins Chase and Brook Lynn, they tell him about how Peter has been terrorizing everyone. He knows what that feels like and tells them how much he admires the way Maxie is holding onto hope. He asks to hold Bailey and remembers when Scout was that little. He urges them to cherish every moment they have. He vows not to rest until he finds Louise. 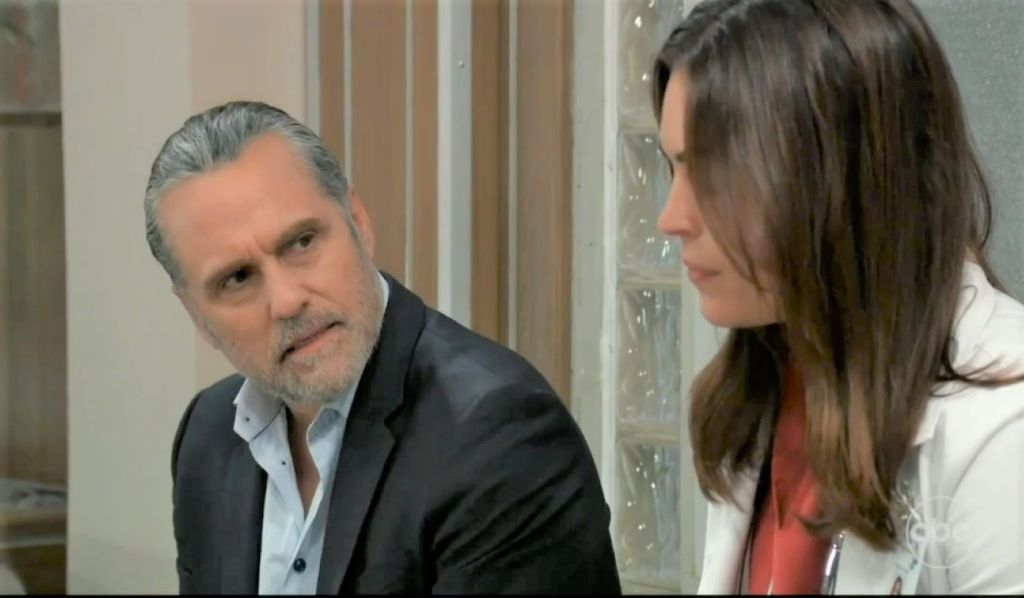 Sonny corners Britt in the corridor of General Hospital. She pays her condolences about Jason. “You know how life is,” he muses, before asking when Brando and Sasha can bring their baby home. They sit down and he compliments her on how she seems more compassionate than she used to. He admires her for being big enough to let Jason go when his family needed him. They know that he cared about them and loved him in his own way. The doctor never thought that Sonny Corinthos would be in the consolation business. He says people think he’s changed since he got back. They go over the times that she and Jason saved each other. She only wishes she could have saved him at the end. 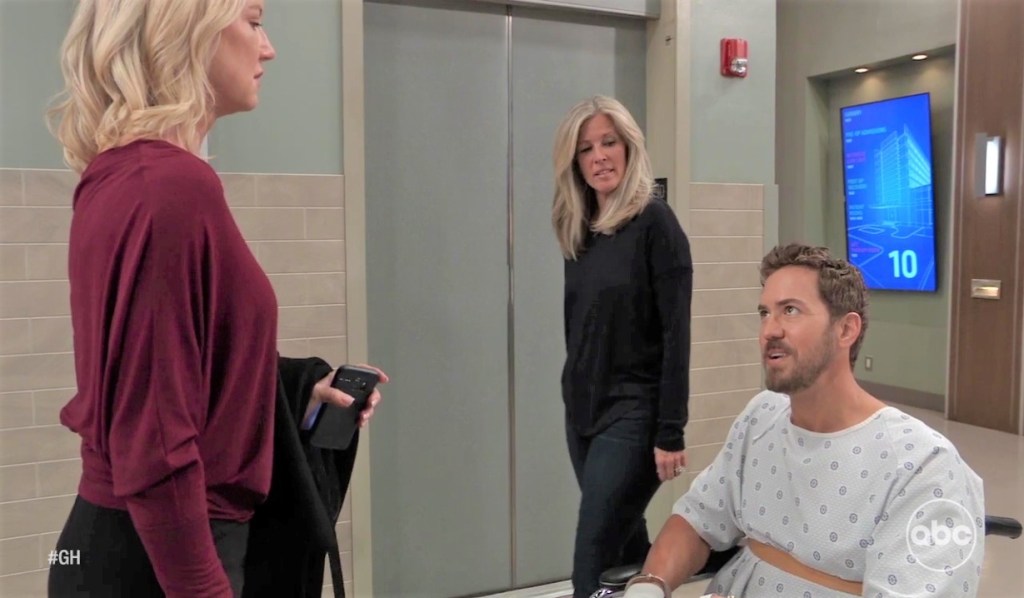 By the elevators, Nina demands to know what Peter is planning to do. He’s shocked that Carly hasn’t run her out of town on a rail yet. Carly appears and Peter says it’s time for him to clue her in. Nina declares he’s a criminal and liar and can’t be trusted. When Peter taunts Carly about Jason’s death, she slaps him and says that’s only the beginning of what he’s getting. “Careful Nina. What happens in Nixon Falls doesn’t always stay in Nixon Falls,” he laughs as the guards lead him away. Furious Carly demands to know what else Nina was up to in Nixon Falls. Nina insists that Peter was just manipulating her. After some more badgering from Carly, Nina claims that Peter was blackmailing her. “What does he have on you?” demands Carly. Nina explains that Peter knew she was hiding Sonny. Sonny shows up as Carly starts ranting about Peter. Carly blames Nina for setting things in motion and getting Jason killed. Distraught, Nina storms off. Carly yells at Sonny that he cannot defend the other woman. He’s not but losing Jason has driven her over the edge. She says that her reaction is no different from when he died. “Yeah, your husband,” he points out. She wants an explanation for that remark but he gets a text and she storms off.

Michael arrives to comfort his mother. Drew told him what happened. Michael thinks there might still be hope. 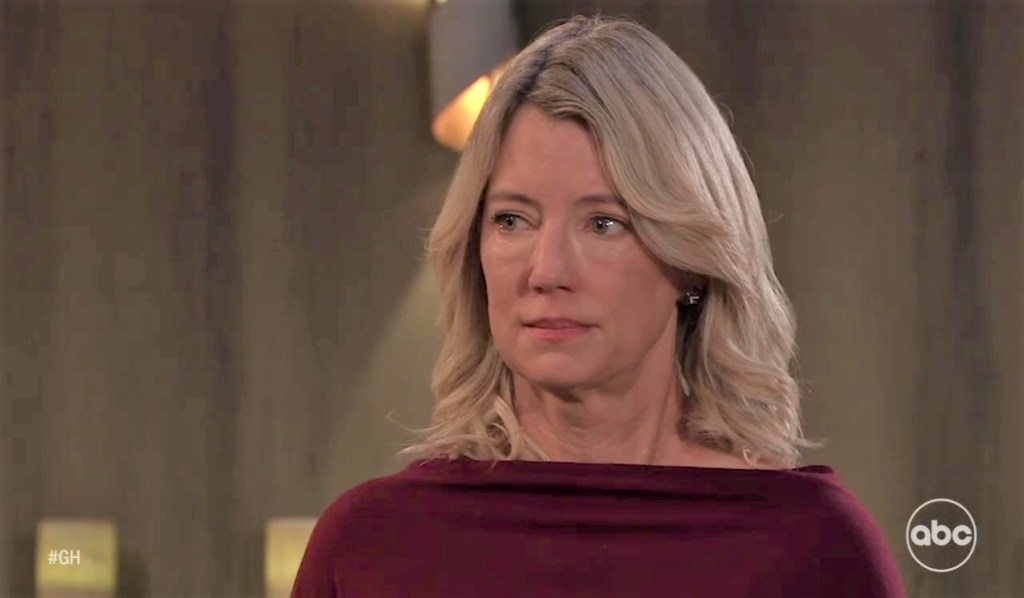 Thanks to her text, Sonny meets Nina in the chapel. He says texting him is not a good idea. She warns him that Peter tried to tell Carly that they were more than friends in Nixon Falls. He says the timing is terrible and assures her that Jason’s death was not her fault. She doesn’t need to apologize to him, but no one needs to know the truth right now. Whenever it comes out, it has to come from him. Nina tells him the love they shared is the purest thing she ever had in her life. Willow arrives in time to overhear this. 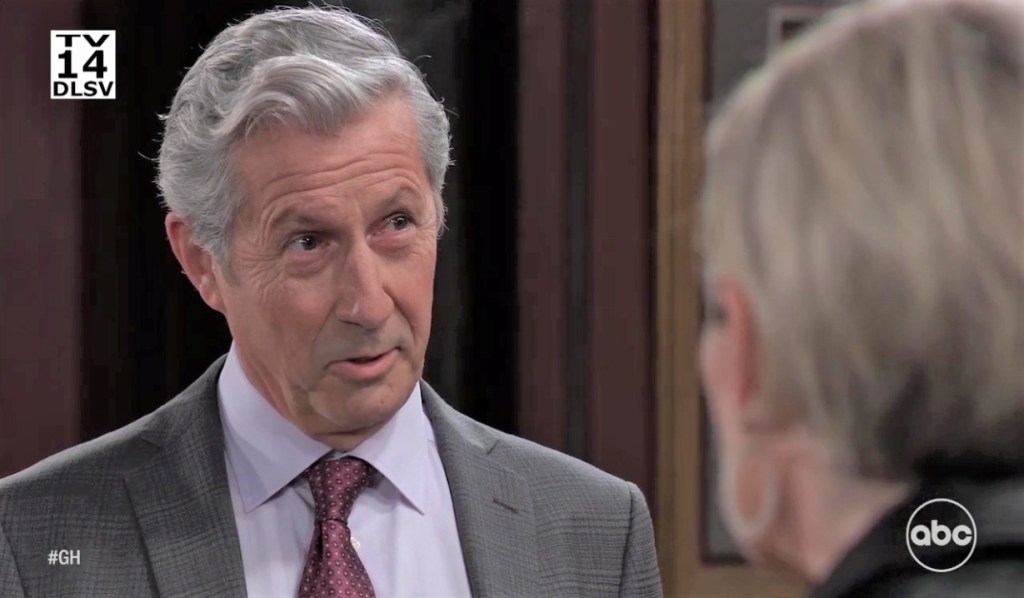 At Wyndemere, Nikolas hands Ava the keys to his Porsche. Before she can take off, he answers the door and his uncle blows in. Ava is startled to see Victor. He asks her to call him “uncle” and says he’s grateful for the role she played in him gaining his freedom. This is news to Nikolas. Victor explains the deal Scott cut for him. She refuses to leave the Cassadines alone as they talk business. Victor prefaces his statement by saying that letting out this information could undo them all. Hayden and her family had to be dealt with to keep Nikolas’ secrets. Victor explains that he made a deal with Peter but isn’t coming out with the details. Once he strolls out, Nikolas says they need to send his uncle packing. She thinks that waiting would be smarter than having a standoff with Victor. Otherwise, he might drag them to hell with him.

On the next General Hospital: Joss questions Spencer’s relationship.

Take a look at Robert Scorpio through the years in the photo gallery below. 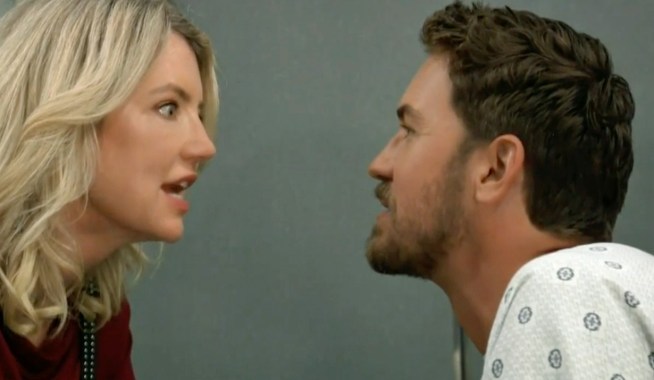 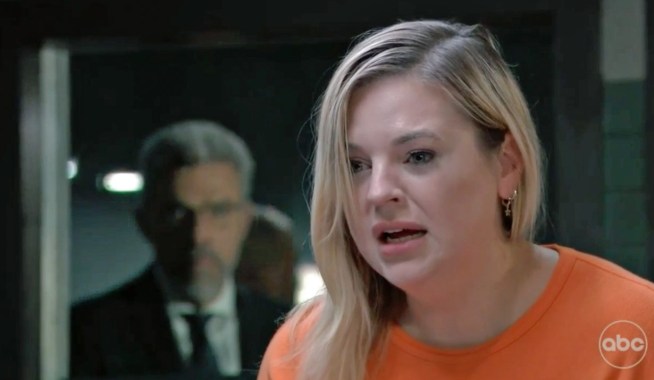