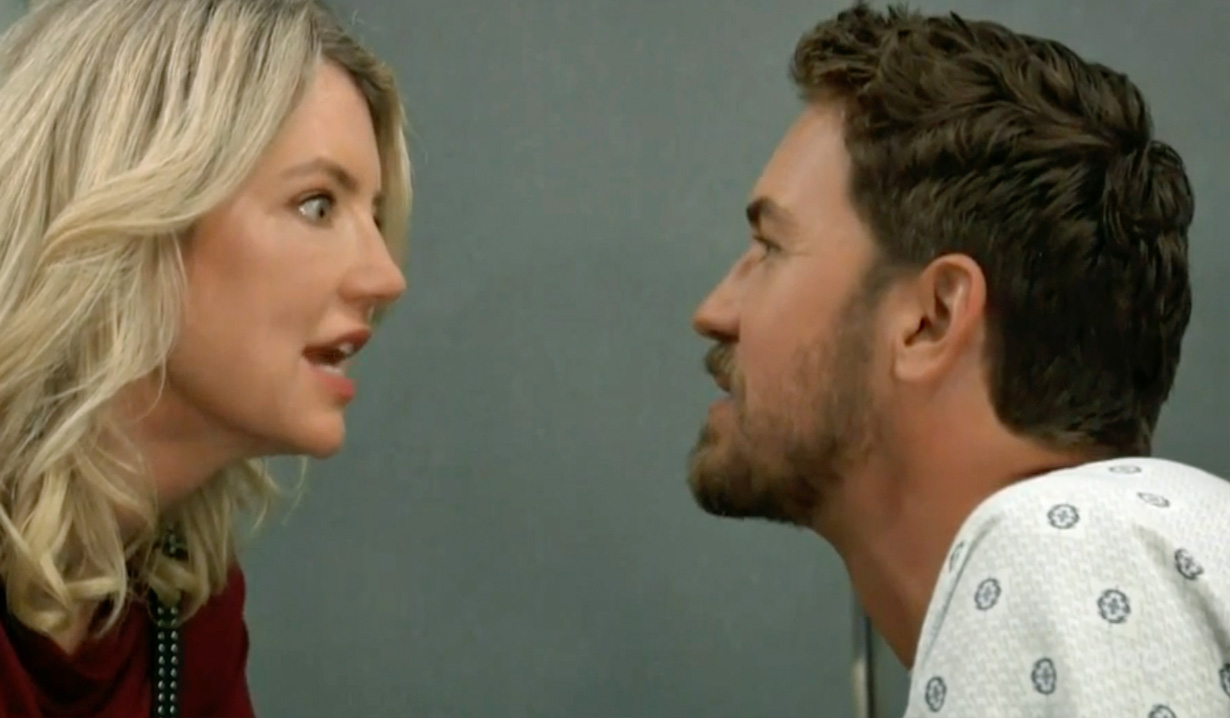 Carly and Sonny arrive at General Hospital to support Sasha and Brando, only to run straight into Nina. Nina offers them an update, but Carly says they don’t need one. Carly storms off to find Monica. Sonny asks Nina about the baby. She tells him for now he’s fine and that Brando and Sasha should get more information today. 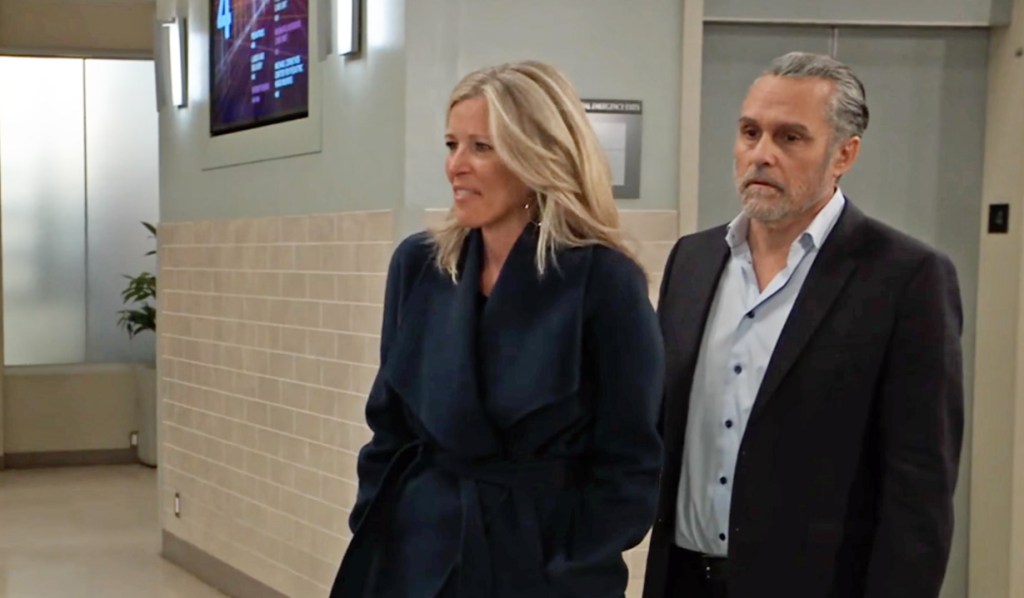 After Carly finds Monica is not in, she leaves her a message. She knows how much pain she must be in, and in all their years of squabbling, she never thanked her for Jason. Carly says Jason loved Monica so much and she thought Monica might want to hear that. Around the corner, Nina listens in.

In Sasha’s room, Britt brings in Dr. Fleming, the neonatologist. The doctor is immediately paged due to an emergency, though not involving their son, so she has to leave. Britt takes over and explains an EEG has been scheduled for Liam and they won’t know much until then. Brando asks what they can do, and Britt tells them to let the therapy take its course, and the two of them need to take care of themselves for their son. 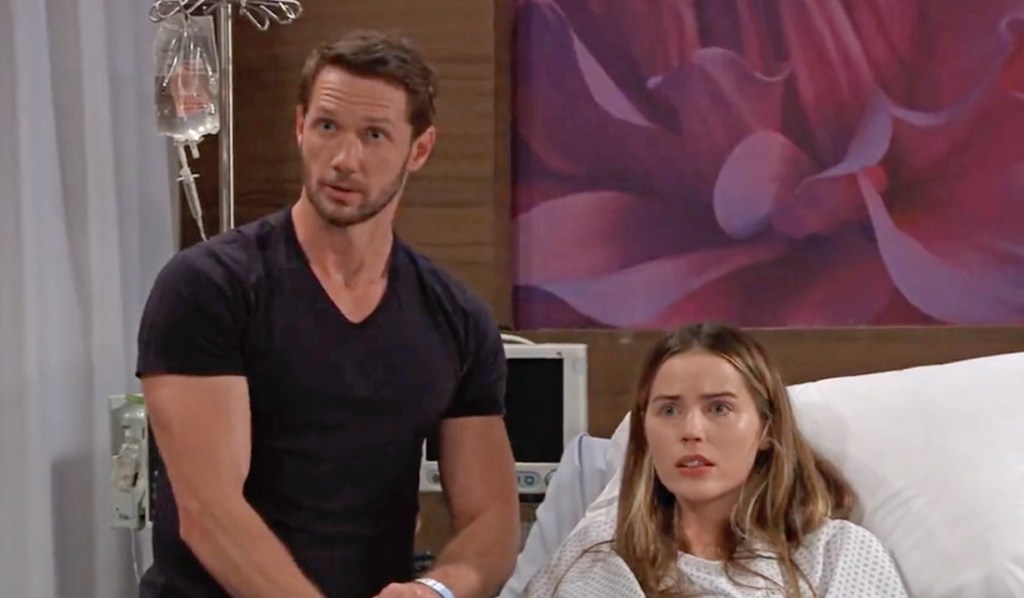 Britt runs into Carly in the hall and gives her an update on Sasha. Britt sits next to her and asks how she’s doing. Carly wants to support Sasha and Brando, but there is nothing she can do for them, just like there is nothing she can do for Jason. Britt says Jason had faith in her and always said Carly was strong enough to survive anything. Carly isn’t sure now that she doesn’t have him to count on. She knows someday she’ll be fine, but not today. Britt sympathizes. Carly thanks her and tells her to take care. 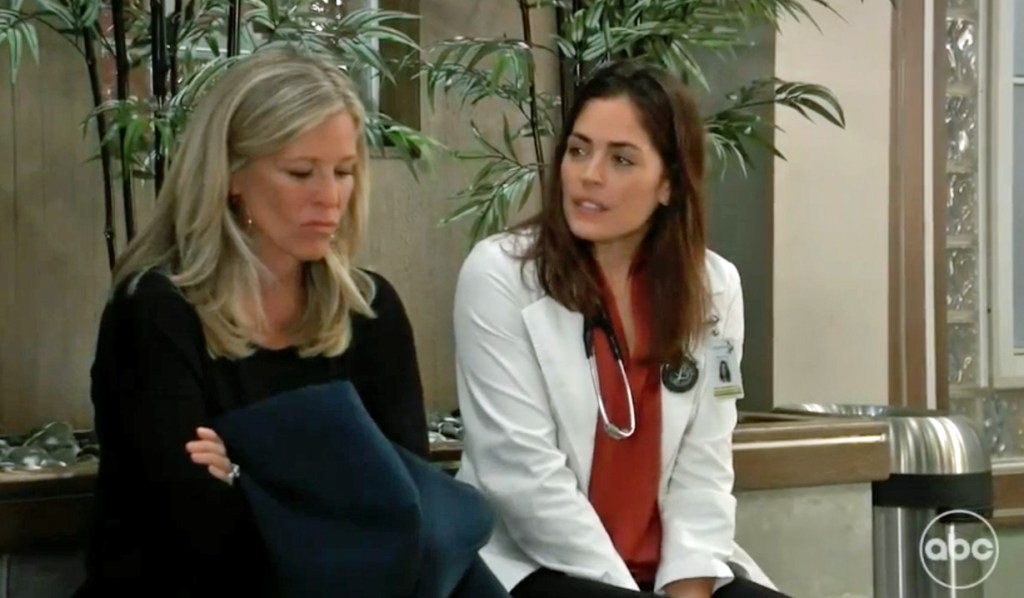 Carly reconnects with Sonny and they visit Sasha and Brando. Carly asks if they named their son, and Brando reveals they named him Liam Michael. Sonny feels his dad would be honored. Brando takes Sonny to see the boy, and Carly decides to let Sasha rest.

Austin checks on Peter and tells him that he seems to be fine, but may have some minor nerve damage from being shot in the arm. Peter sees Austin’s badge and recognizes his name as the man who delivered his daughter. Austin informs Peter that he and his plan put Maxie and his daughter at great risk. Peter realizes Austin was the last person to see Louise and may know where she is. Austin scoffs that even if he did, he wouldn’t tell him. 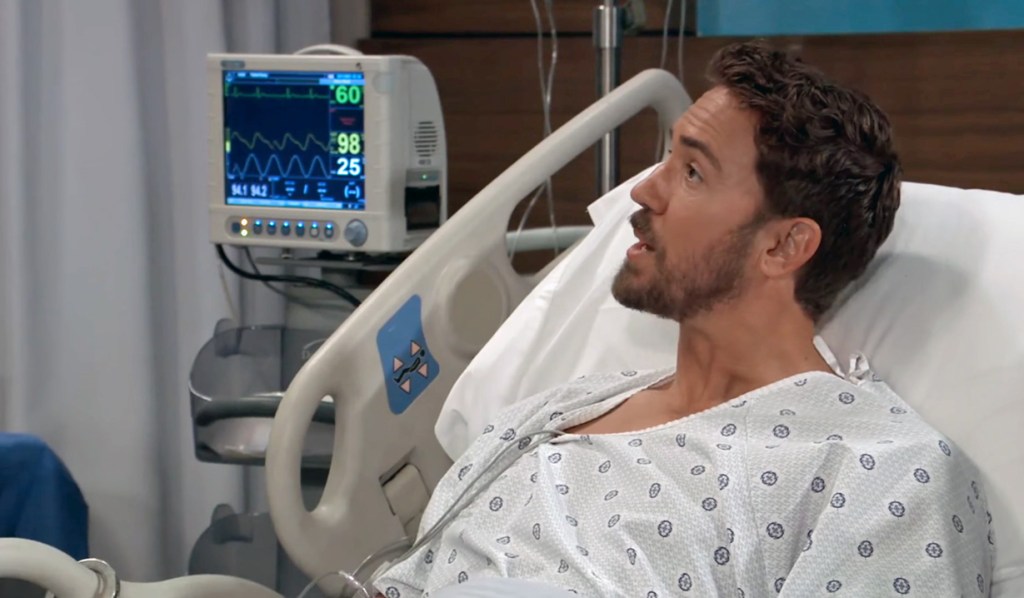 Austin takes some blood from Peter, taking delight in inflicting pain in doing so. Peter reminds him of his oath to do no harm. Austin reveals Maxie is his patient too, so what about the harm that’s been done to her. Peter wonders what Maxie is to Austin. Austin says he is just a friend, and Peter advises he keep it that way. Peter believes he will be reunited with Maxie and his family. Austin heads out. 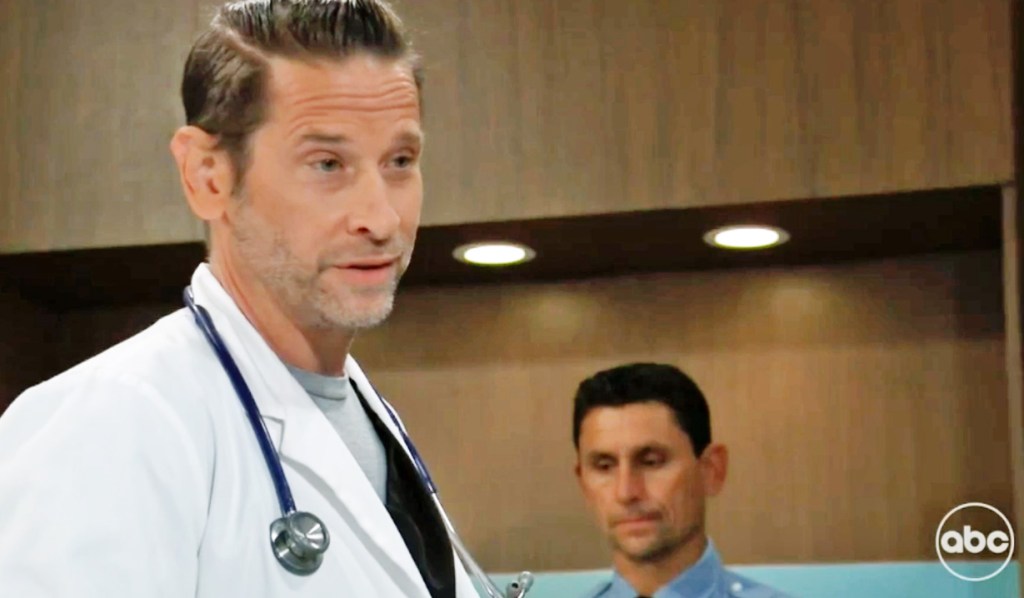 In the hall, Austin runs into Britt and informs her that he just met her brother, and asks to be kept on his case. Britt thinks this isn’t just about taking care of Peter. Austin is worried about Maxie now that he’s met Peter, who seems like he still has an ace up his sleeve instead of someone facing life in prison.

Meanwhile, Peter is wheeled off by the police and comes face to face with Nina. He’s surprised to see her alive, and jokes they are both hard to kill. Nina asks why he’s not in Pentonville? Peter explains that thanks to Jason shooting him that he required medical attention. He wonders if she’s alive because Mike came to her rescue? Nina tells him there is a place in hell waiting for him. Peter is sure that Nina will beat him there. Peter is surprised that Carly hasn’t run her out of town unless she doesn’t know about her and Sonny. Suddenly, Carly appears behind them.

At the Quartermaine mansion, Valentin arrives with Anna in tow. BLQ asks if the’s there to throw more threats or gloat about getting Chase thrown off the force? Valentin regrets what he did to Chase. Chase insists he was blindsided to learn the truth, and Valentin notes Brook Lynn played them both. Valentin says he’s only there to say goodbye to his… to Bailey. 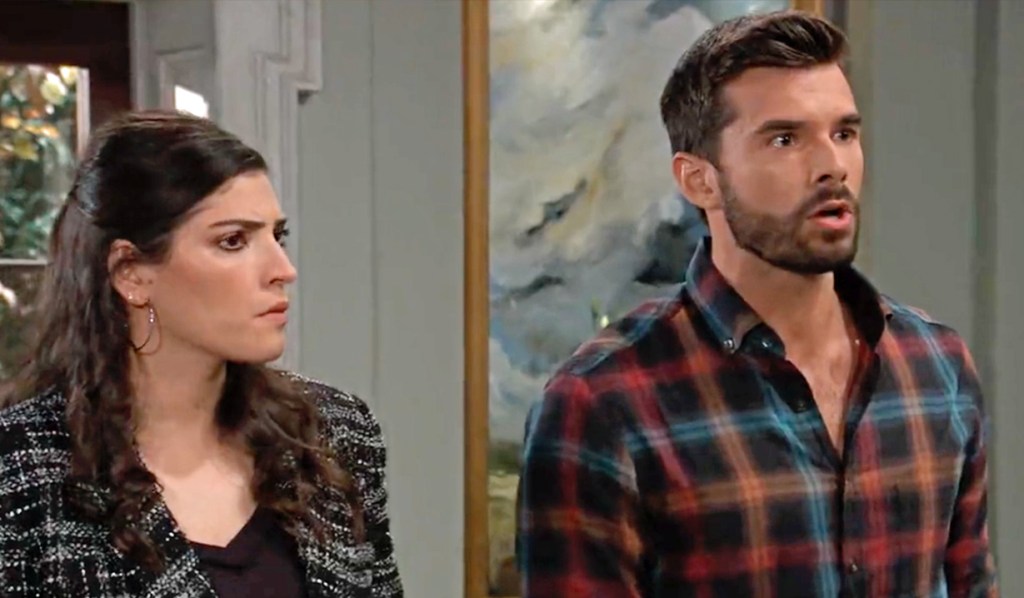 Anna swears they aren’t there to make problems, and Valentin explains he just can’t turn off his feelings for Bailey. Chase says Brook Lynn feels guilty enough and asks how long he will pile it on. Valentin needs to say goodbye before he can tell Charlotte the truth. BLQ storms out, and Chase follows. Valentin fears that she isn’t going to let him see Bailey. 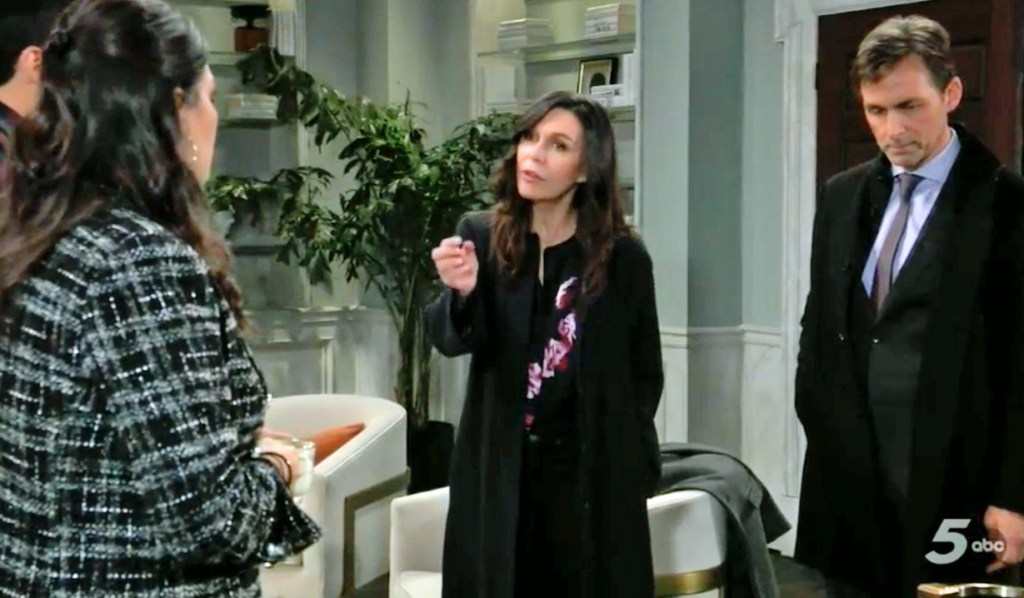 In the kitchen, Maxie is shocked to see Drew. She heard he was alive and hadn’t processed it until that moment. They embrace, and then sit down to talk. Drew fills her in on seeing Scout and Sam, and that Dante was there. Maxie explains it was a slow process with them, and they came together trying to find him. Drew says he and Sam were over long ago, so she doesn’t have to protect his feelings. Drew asks about Louise. Maxie believes Louise will be back one day, and it will make everything she’s been forced to do thanks to Peter worth it. Drew understands. They discuss what went down in Greece, and Maxie tells Drew at least Peter doesn’t have power over him anymore. She would give anything not to still be afraid of him. 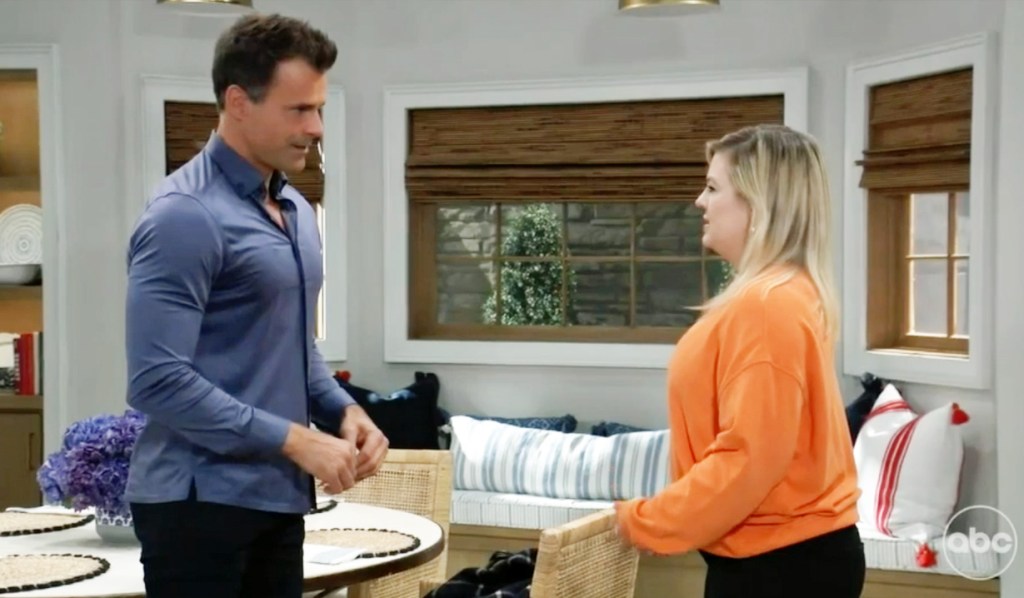 Maxie and Drew head to the living room and spy on Valentin saying goodbye to Bailey. Maxie quickly rushes off, and Chase suggests they all give Valentin privacy. Everyone leaves, but Valentin asks Anna to stay. 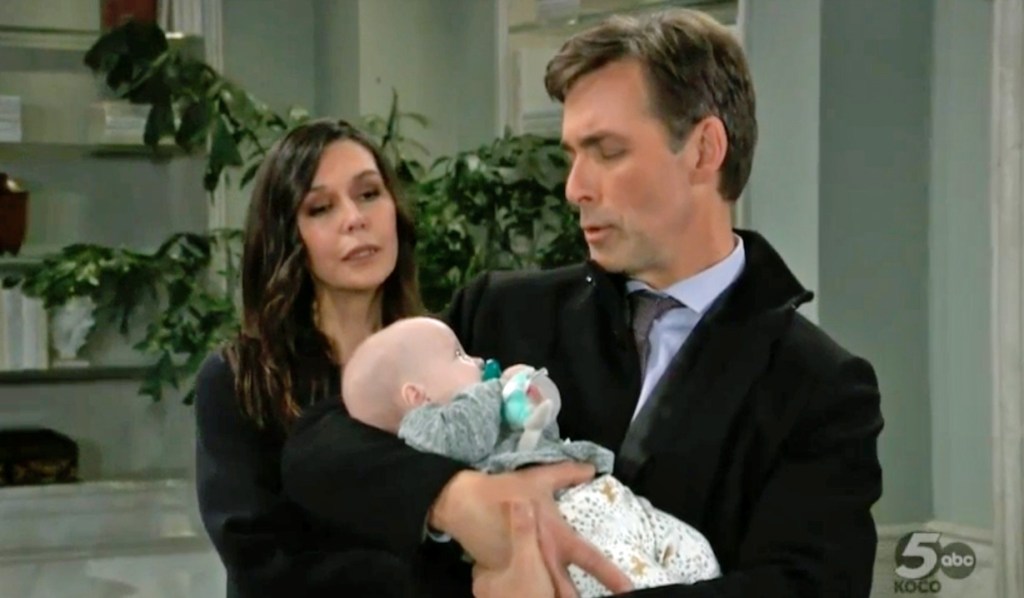 In the foyer, Drew asks Maxie what is wrong. She explains she hates seeing someone separated from the one they love. Drew knows the Quartermaines have issues with Valentin, but he wouldn’t be there without him. Maxie quickly exits. Valentin says goodbye to Bailey, hands her to Brook Lynn and he and Anna make a quick exit. Outside he breaks down on Anna’s shoulder.

In the kitchen, Maxie is in tears and storms out through the patio doors exclaiming that there have been too many lives and hearts broken and it has to stop.

On the next General Hospital: Peter taunts Nina and Carly and thinks they should let Carly be the judge. Laura exclaims she needs to get out of there. And Sonny tells Britt he can see why she was so special to Jason.

Untangle the branches of the Cassadine family tree with the photo gallery below.

Alexis Is Shocked by Sam’s...