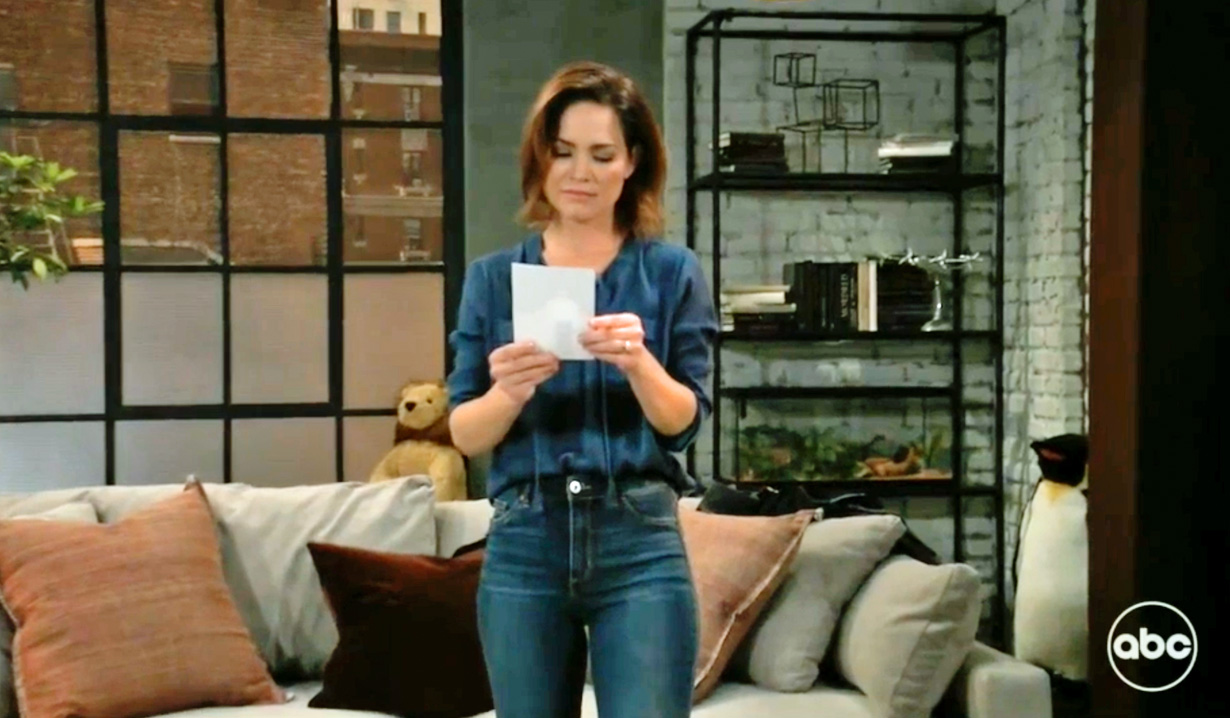 Finn arrives home to his new apartment to find Liz, Violet, and Aiden already there. Liz brought them new throw pillows for their sofa as a housewarming gift as well as kitchen utensils. Violet runs around the apartment looking at everything, and Aiden reveals he has another surprise for her. Aiden shows her some photos of their family so she can learn more about them and her mother’s side. 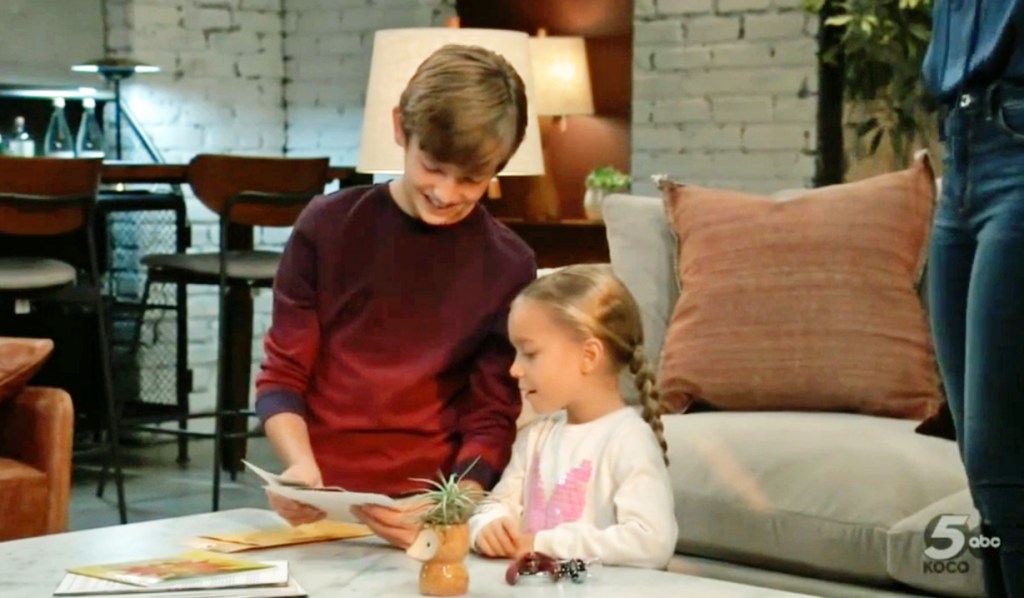 Violet is shocked they are actual pictures and not ones on Aiden’s phone. Finn invites Liz to stay for dinner because Chase is coming over, and she can invite Jake and Cam. Liz says Jake and Cam are busy, but she accepts. Violet finds a photo of Liz when she was little with another man. Liz appears troubled, and Aiden reveals that’s her father, Grandpa Jeff. Violet knows her Grandpa Gregory, so she asks to meet her Grandpa Jeff. Aiden says he lives far away, and they don’t see much of him. Liz explains he’s a very busy man and travels all over the world helping people who need him. Aiden and Violet head back into the kitchen to unpack more cooking gadgets. Finn apologizes for Violet’s questions. Liz just wishes she had better answers for her. Finn wonders why she doesn’t. She admits she and her father haven’t been close for a long time. 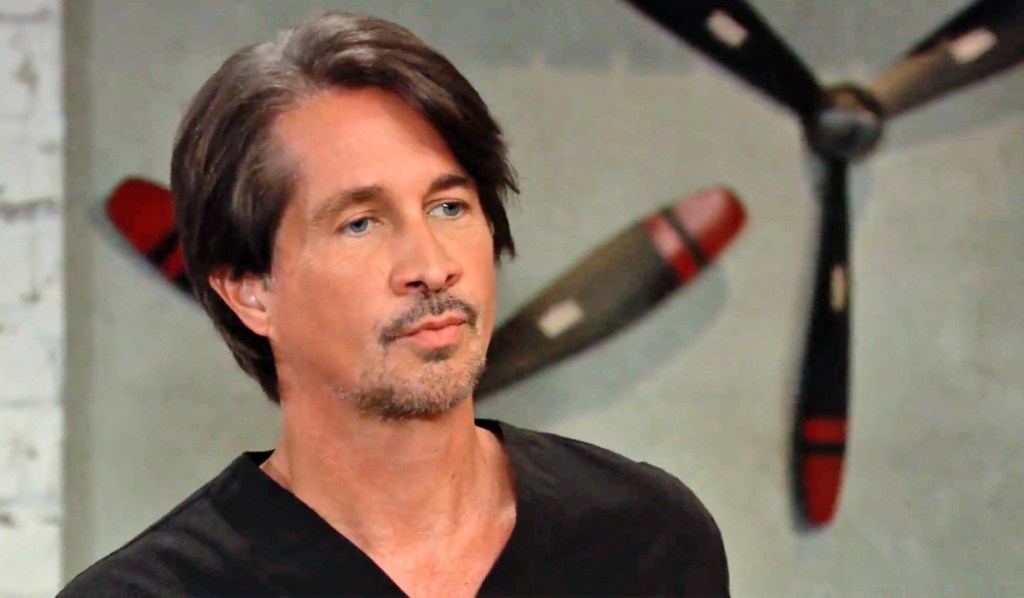 At Kelly’s, Spencer vents to Esme about Kevin forcing him to get a job. She says getting a job is about who you know, so he thinks maybe Britt could help him. He exits to make a call. 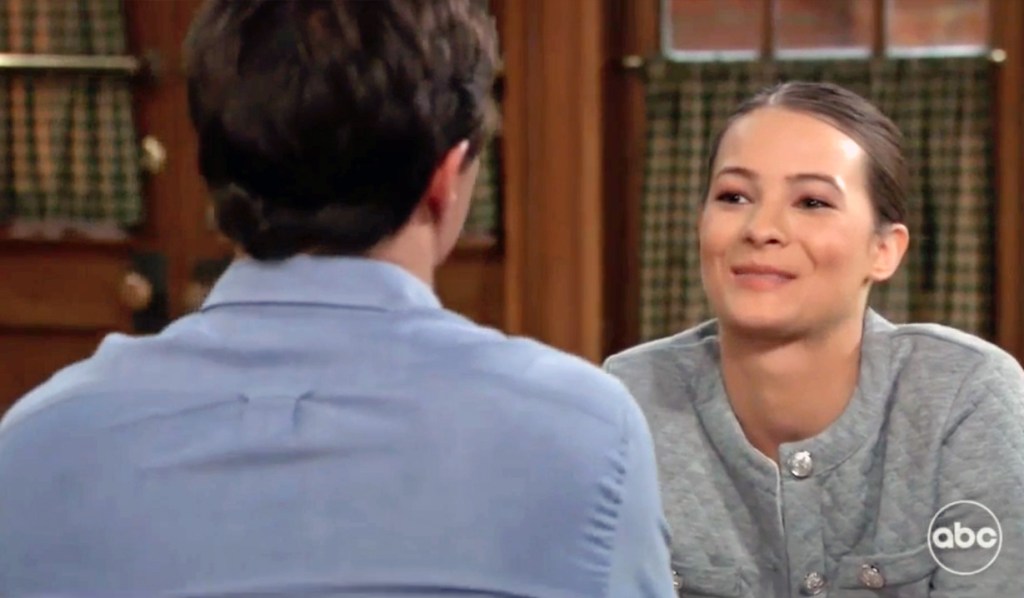 Cam enters, and Esme again thanks him for standing by Spencer. Spencer returns and couldn’t get ahold of Britt because she’s out of the country. Esme asks Cam if he knows where Spencer can get a job. Cam reveals he’s been promoted to assistant manager, so they need a new server. Spencer gives it a hard pass. 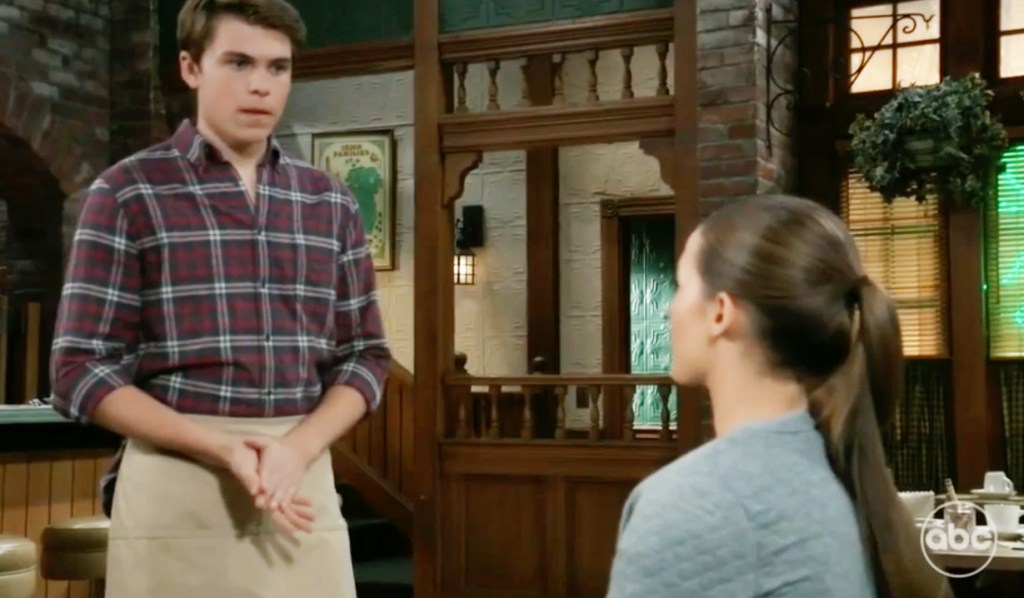 Esme points out to Spencer that he really doesn’t have the luxury of passing up this job. Spencer goes to Cam to beg for the position. He admits he’s been a jerk and a snob, and he’d be eternally grateful if Cam would offer him the chance. Spencer says he can start as soon as he trains him. He tells Spencer his first lesson is to smile and say. “Welcome to Kelly’s, I’m Spencer, and I’ll be your server today.” Spencer swallows his pride and repeats it. 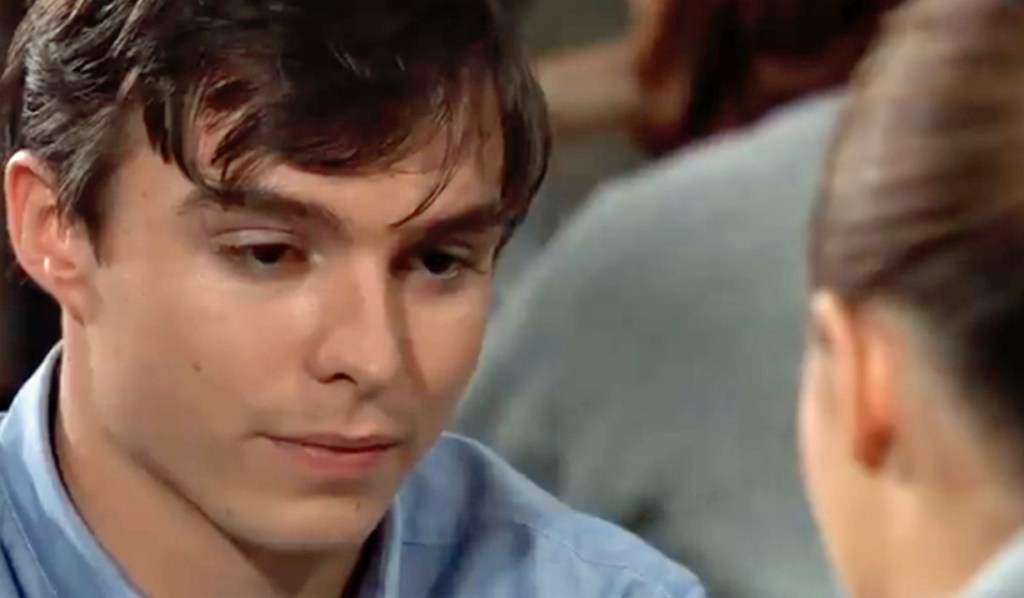 Ned visits Austin at the hospital to discuss Leo. He explains Olivia can be single-minded when it comes to her son and asks if he has any suggestions to help her see Leo how they see him. Austin can’t confirm that Leo has autism and a specialist needs to diagnose that. Ned notes Olivia won’t take him to see one. Austin thinks Ned doesn’t need him, but a marriage counselor. Austin lashes out about the Quartermaine’s and accuses them of using Leo as a pawn. 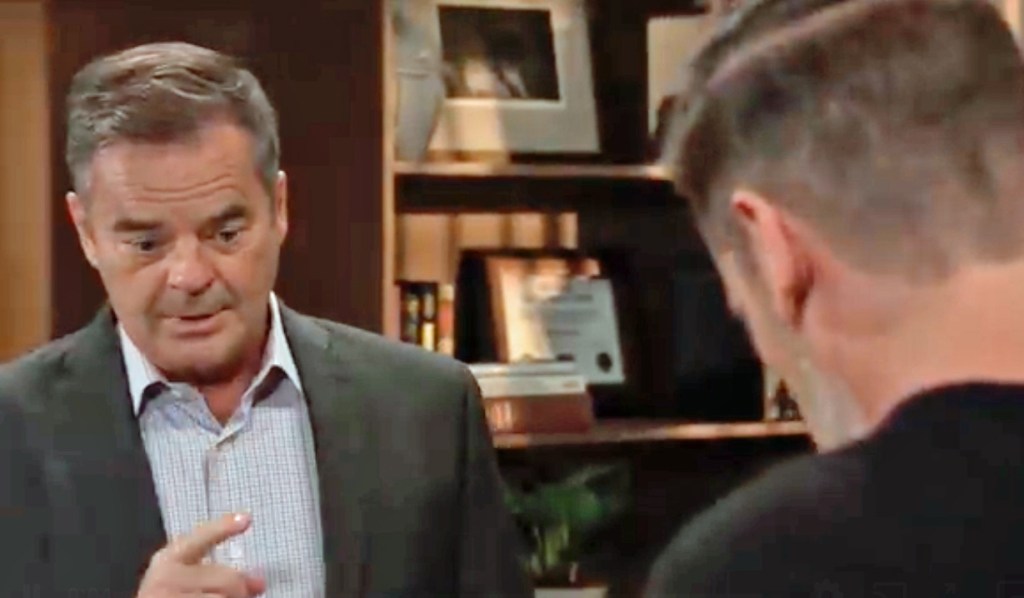 Ned knows Austin is still angry and explains Brook Lynn did what she did to try and make up for a mistake she made last year regarding the company. Austin still can’t overlook that Brook Lynn used his love for medicine against him, and he won’t forgive her for it or forget it. Austin gives him the number of a specialist. Ned can’t make an appointment without Olivia’s permission. Austin urgers him to find a way to convince Olivia to do the right thing for her son. 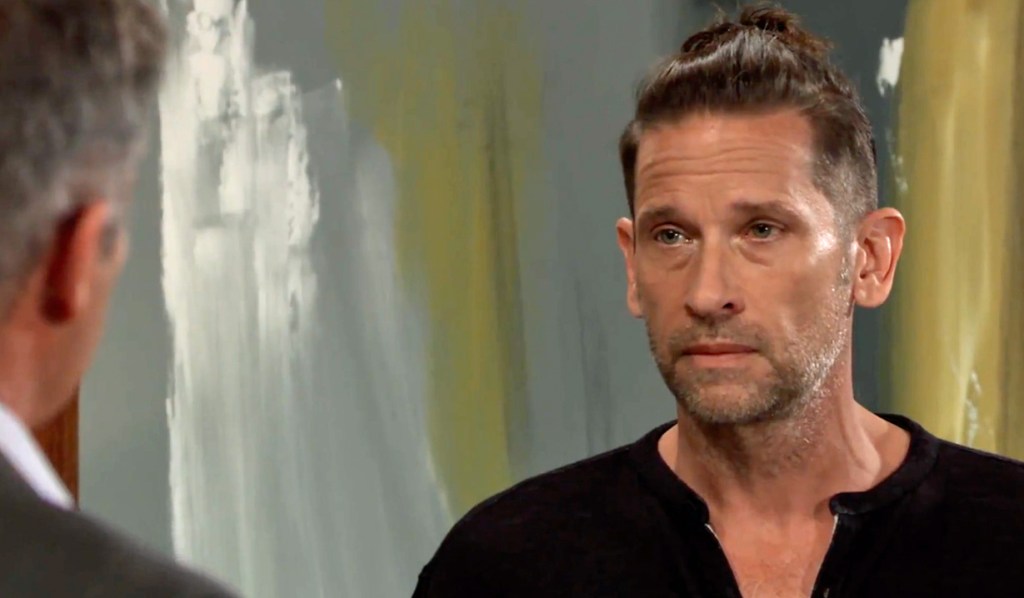 At the Metro Court, BLQ meets with Chase to celebrate Austin dropping his claim to the ELQ shares. Chase wonders why he did that. BLQ reveals what she did to force Austin his hand, and Chase is not impressed because she manipulated Austin. Given Austin chose his medical career over ELQ, he thinks it should prove to her that he’s a good guy. BLQ feels Austin is anything but a poor country doctor and declared war on her. He says if Austin does anything against her to let him know. Chase has to take off and gives her a kiss on the cheek. 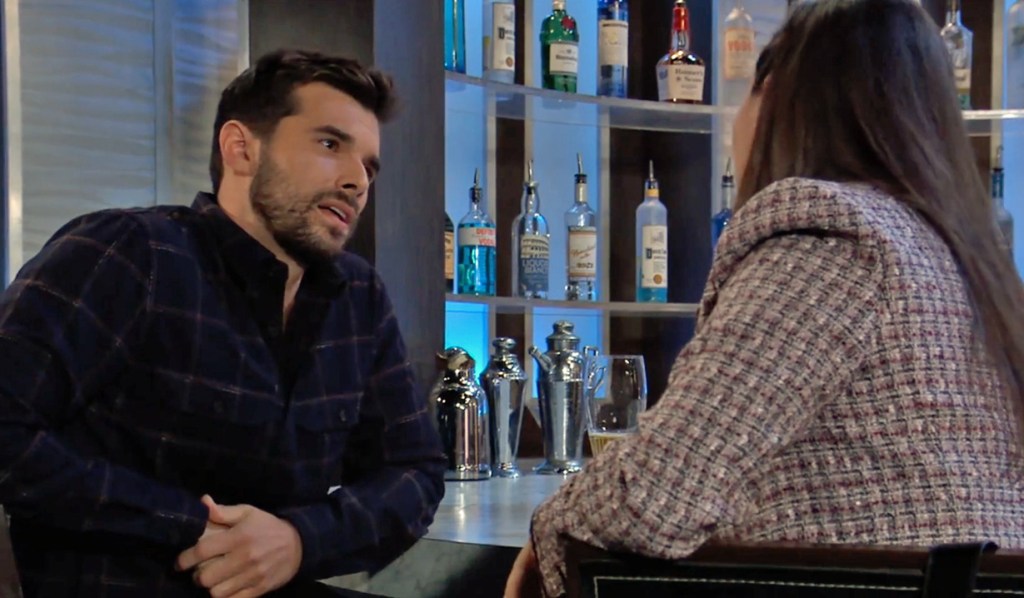 Up in the Deception offices, Gladys relishes over her taped confession of Brook Lynn’s. She goes online shopping and bills everything to BLQ. 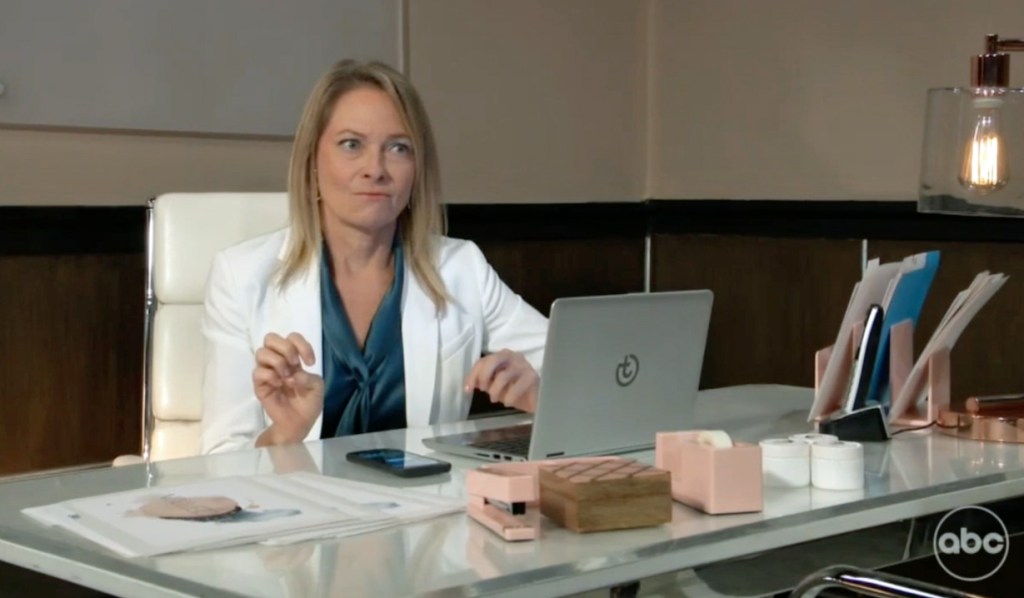 Back at the bar, Brook Lynn gets a text about Gladys’ purchases. She summons Gladys to the bar to scold her and tells her she will pay back the items she charged to her and will type up all the meeting notes by tomorrow morning. Gladys refuses and says she’s taking a mental health day tomorrow. Brook Lynn wonders if she’s trying to get fired. Gladys gloats that won’t happen unless she wants her to reveal her major secret. She plays the recording of BLQ confessing Valentin wasn’t Bailey’s father, stunning Brook Lynn.

More: Cameron Mathison mourns the loss of his mother

Chase arrives at Finn’s place and asks if Liz is joining them for dinner. She confirms she is. Finn suggests they all get into the kitchen and eat. Everyone but Liz heads in, as she stays behind in the living room to look at the photo of her and her father. Finn calls out to ask her if she’s coming, and Chase adds that Finn can’t figure out how to turn the stove on. Liz says she’ll be right there, rips the photo up, and shoves it in her back pocket. 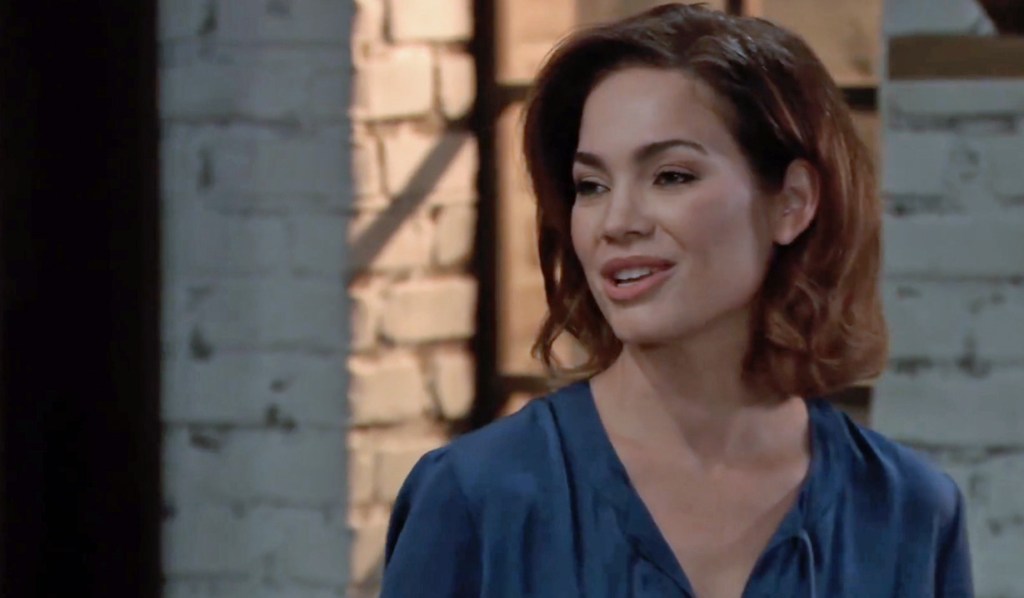 Sasha arrives at the Port Charles Grill. She calls Brando to suggest they meet for dinner. She runs into Willow, who is flustered. Willow admits she’s taking a break from Michael. They grab a table, and Sasha asks if this has to do with Nina’s arrest. 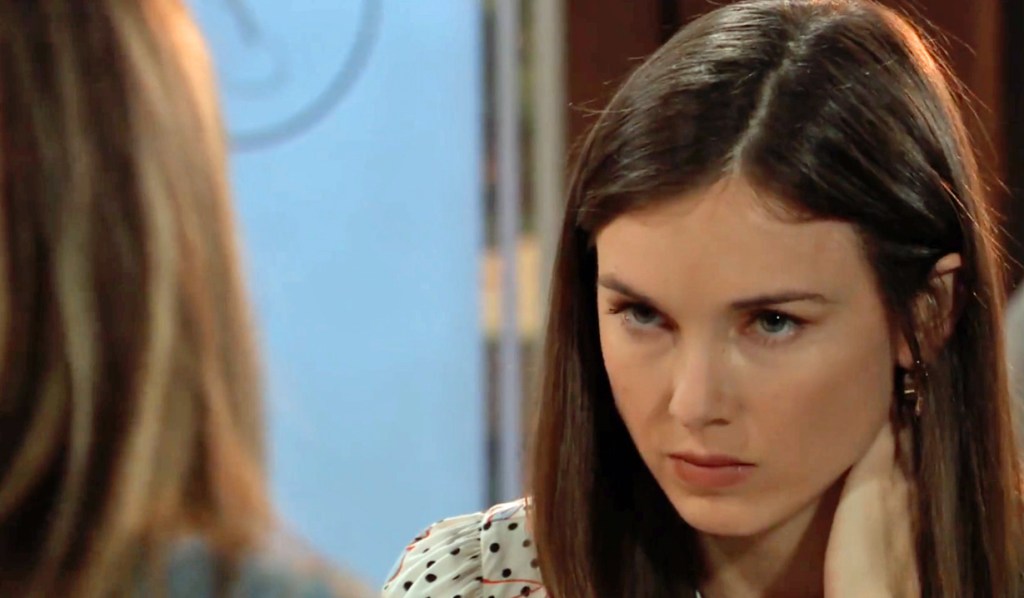 Willow reveals Michael was behind the arrest, which Sasha says doesn’t sound like him. She vents that they were supposed to have made decisions about Wiley together, and this move will keep Nina from seeing Wiley. Willow says he did this without asking to hear her thoughts on the matter, and she thought they agreed not to provoke Nina. Willow feels for once Michael kept something from her. Sasha advises she talk to Michael and tell her how she feels. She reminds Willow that Michael loves her, and they can work this issue out. 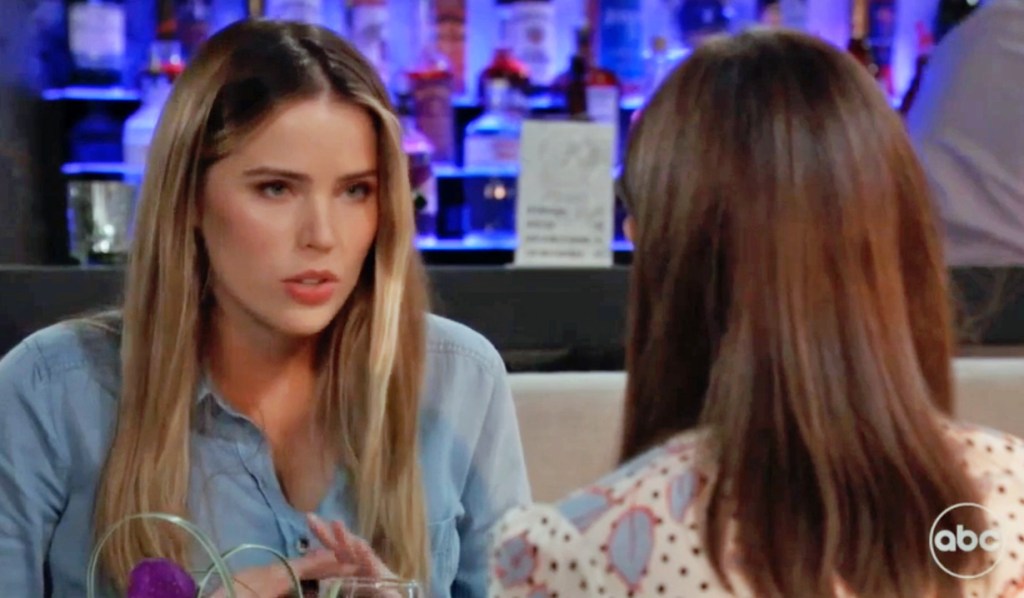 At the courthouse, Carly and Sonny find Michael on the phone with the district attorney, who he thinks will make a great attorney general. Carly tells Michael that was a big move to have Nina arrested. He wants to see Nina be brought to justice. Sonny says Nina is a troubled woman and is sorry for her actions. Michael brought Nina’s actions to someone in a position to do something about it. 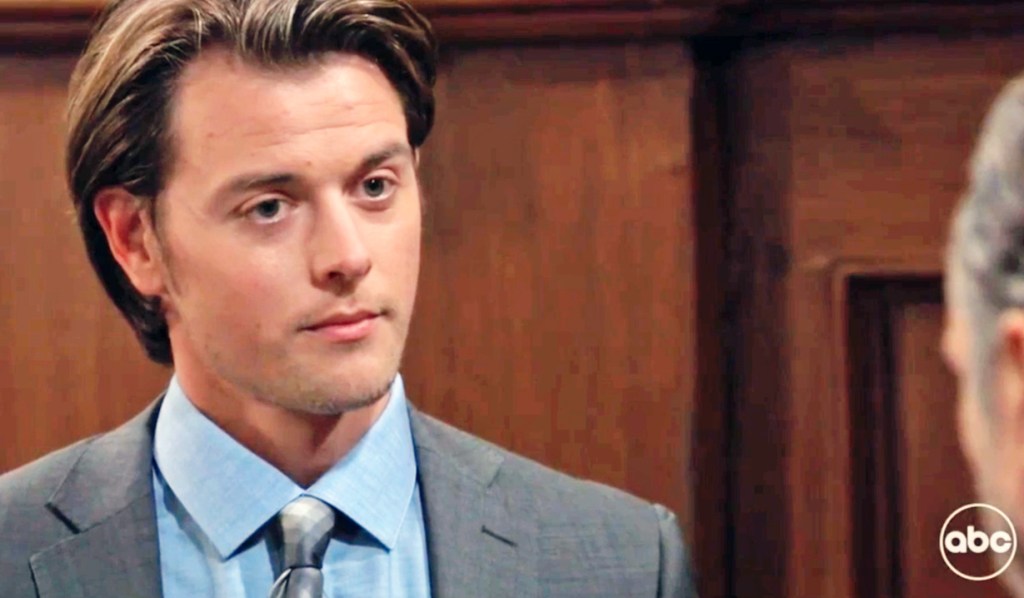 Carly agrees with Michael’s move. He is surprised his mom didn’t strike first against Nina. Carly had a million ways to get back at Nina but reconsidered. Sonny reveals she did so because he asked her to. Michael asks if Sonny has a problem with him reaching out to the DA, and Sonny admits he does. He just wants to forget about Nina and put what happened behind them. Michael feels if she’s convicted then she’ll be out of all their lives for good. Sonny asks how he got involved with the district attorney. Michael explains the circumstances, and that he made a substantial donation to his campaign. Carly and Sonny warn him that this could be seen as a bribe. Michael had his attorneys make sure the donation was legal, and fumes that Nina is the one in the wrong. 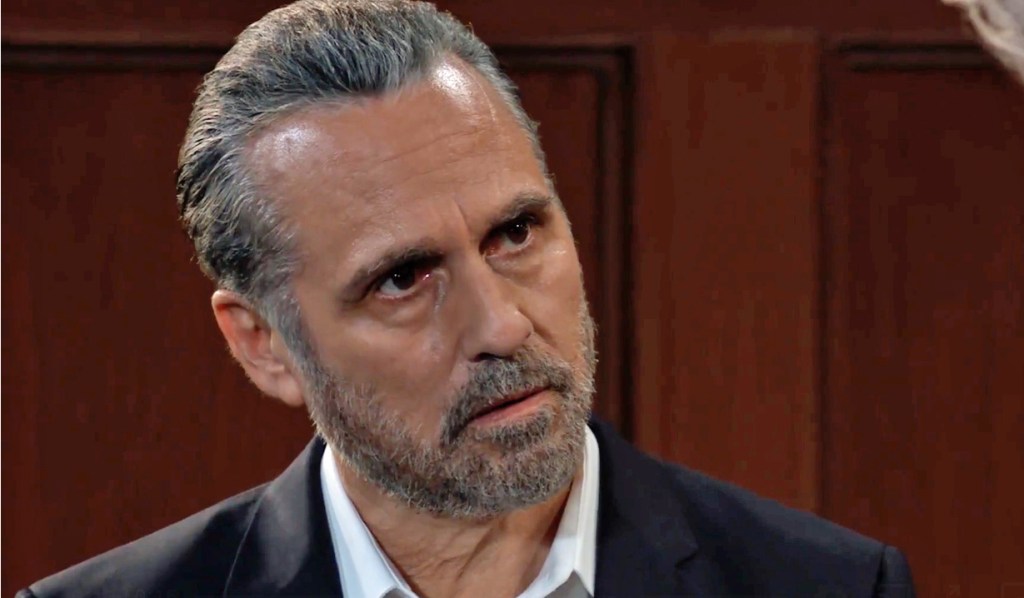 On the next General Hospital: The mystery man talks to Portia, Willow tells Michael that she thought she was his family, Nina asks Jax to stop trying to save her, and Ava tells Sonny that she knows he shares everything with Carly.

With Liz’s father once again being mentioned, take a look at our gallery of who could play Jeff Weber on General Hospital. 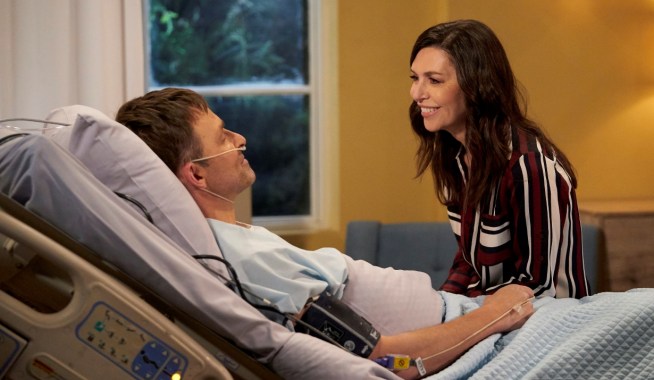 As Anna Almost Tells Valentin Her True Feelings for Him, [Spoiler] Gets Shocking Evidence That Could Tear His Life Apart

When Alexis Probes Nikolas for Answers About Hayden, He Threatens to Keep Her Locked Up 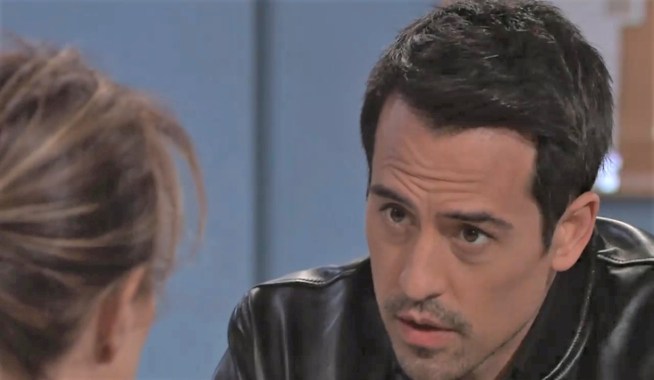