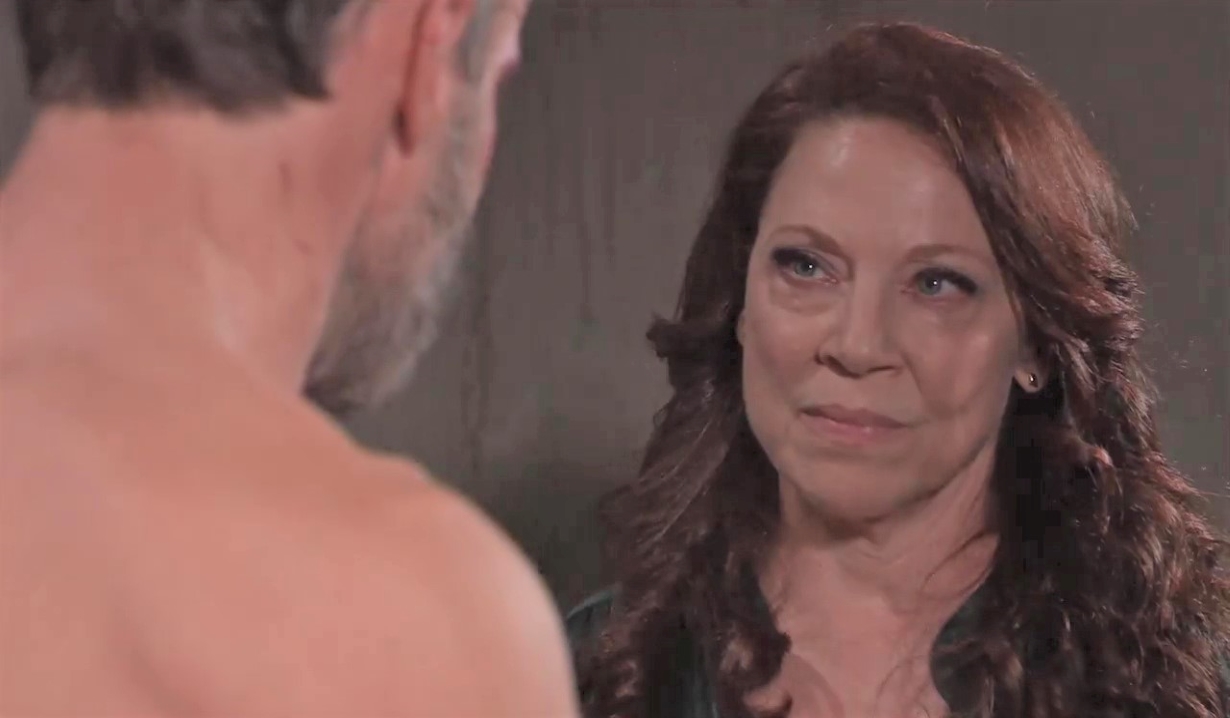 Drew wakes up in his cell on the Cassadine compound feeling baffled. Peter dumps Obrecht in with him. He leaves a medical bag so she can clean Drew’s wound. As she tends to him, he tries to remember what happened in the day he’s lost. He recalls Peter had said that there were problems with Jason that wouldn’t be the case with him. This feels like what happened when Helena was controlling him. He thought all the conditioning was removed. She explains Faison must have added a second order of conditioning. Drew realizes Peter is controlling him. 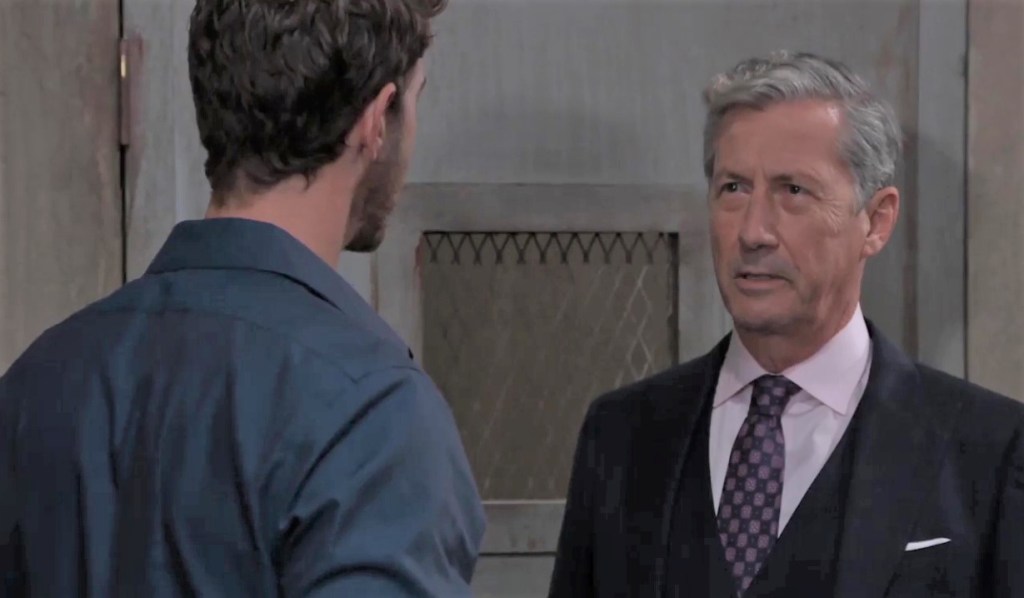 Peter bumps into Victor down the hall. The Cassadine says he has a lot to answer for. Thanks to Peter, the area is crawling with cops and WSB agents. He’s realized that Peter has been lying to him and sent Drew on an op without his permission. He calls his men in to grab Peter. 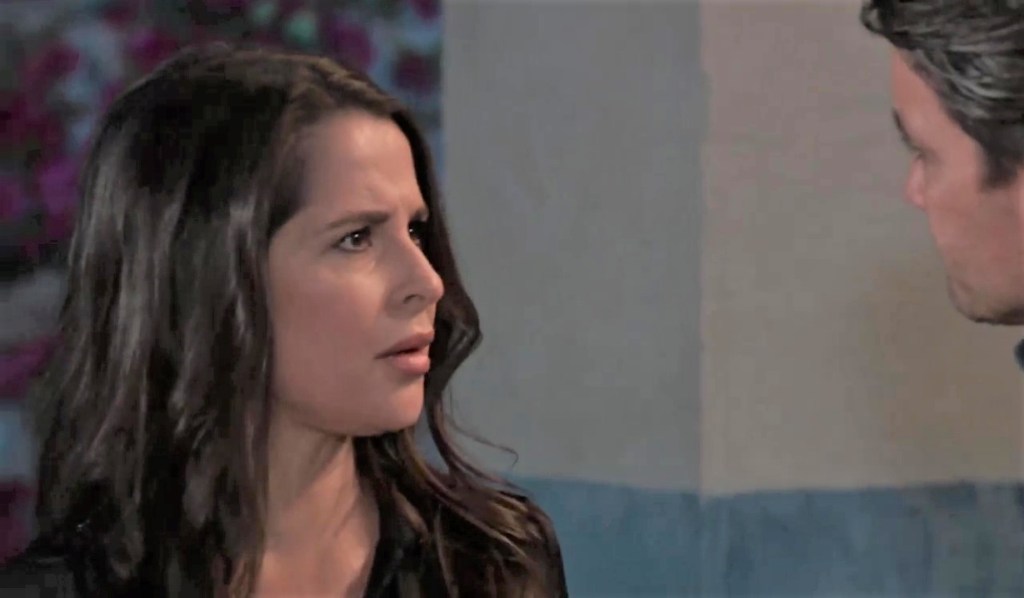 Dante and Sam wonder what happened when they arrive on a patio that’s been shot up. Anna and Robert fill them in that she was ambushed by a shooter. Sam informs them that Dallas confirmed Drew’s crash was faked. Scorpio gets a call saying he can interrogate the musician who gave them fake information and wanders off. When he returns, he has a location on where Valentin should be. It’s a secret compound owned by Victor Cassadine and he’s working with Peter. 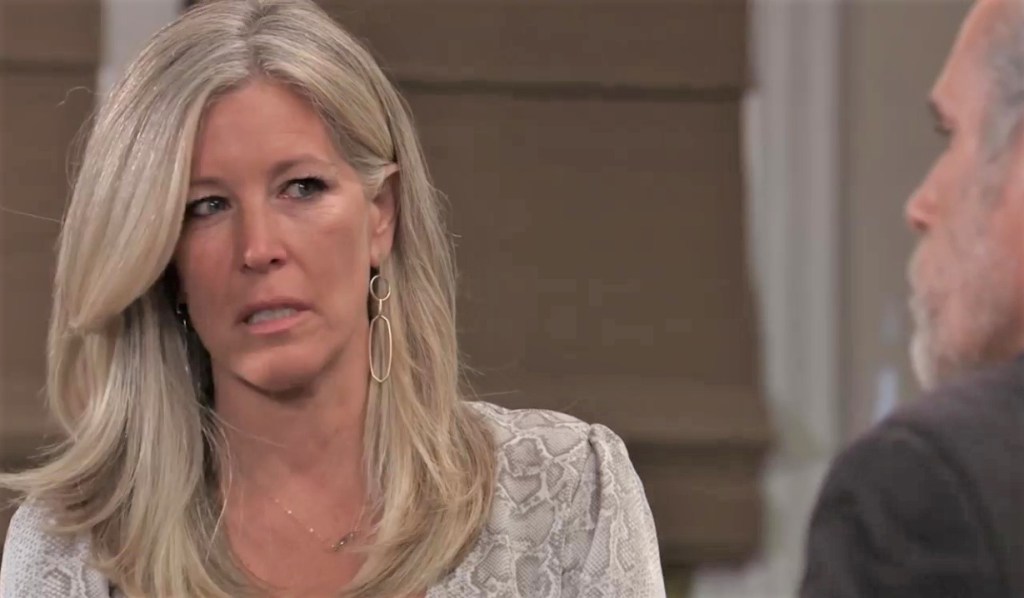 Sonny arrives in the Corinthos kitchen and finds Carly playing with his hat from Nixon Falls. She says the man who wore it is a mystery to her. He insists he’s the same but wonders if she’s changed. She admits that she and Jason would have slept together as husband and wife. He doesn’t know how to be okay with that. Carly explains that losing him was hell and claims she only planned to marry Jason to show a united front to their enemies. That quickly changed and she fell in love with him. She insists they are just best friends and they aren’t in love anymore. Sonny knows they weren’t cheating on him but it doesn’t feel great. She puts all the blame on Nina. He insists she won’t be a problem. Carly doesn’t think ordering Nina to stay away from their family is enough. He says they need to rebuild and she offers her hand. Sonny takes it. 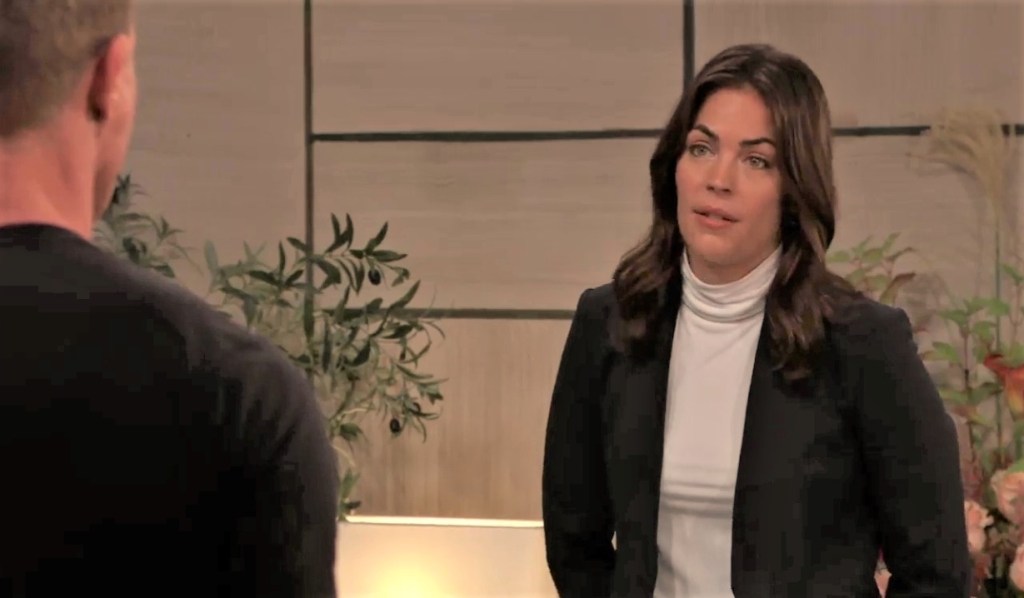 Jason shows up at Britt’s office. She’s flustered and admits she could use his help rescuing her mother. This is difficult for her. She unpacks the details of her mother’s disappearance. He assumes the conference her mother was supposed to attend must have been fake. She doesn’t see who could have known she had Huntington’s to lure Liesl there in the first place. Peter might be involved since her mother was plotting to kill him. They ponder this and she wonders if she should go to St. Lucia to look for answers. He wants to go with her. 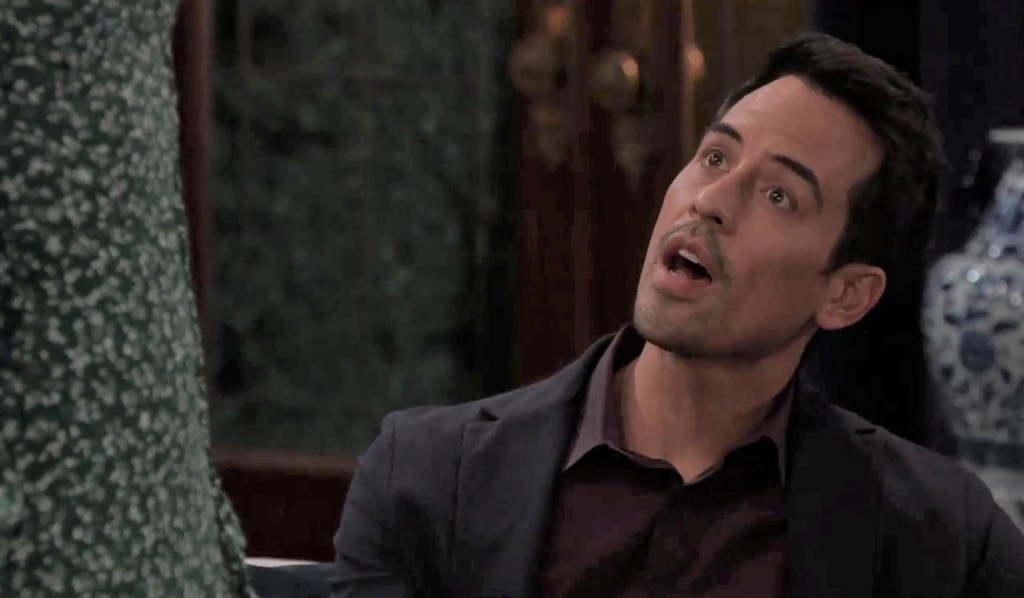 Kevin drops by Wyndemere to speak to Nikolas since Laura isn’t available. The prince tells him that Spencer was the stalker. The doctor is sorry he didn’t register his concerns about Spencer earlier. Nikolas has cut off his son’s resources but doesn’t know what else to do. Esme bursts in and tells them that Ava had her boyfriend arrested. Nikolas tells her she’s lucky she wasn’t arrested too. Esme protests that she was only trying to help him reconnect with his son. She thinks Spencer needs protection, not punishment. The prince says his son is lucky to have a loyal girlfriend because he’ll need all the help he can get. She walks out in a huff. 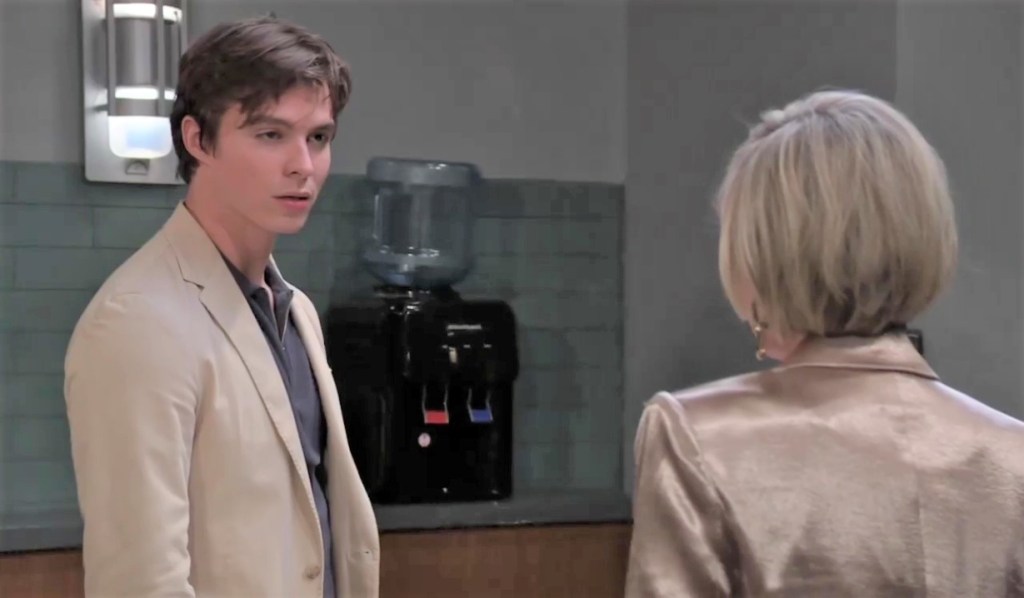 In the interrogation room of the PCPD, Ava tells Spencer that his father is prepared to let him be locked up. That means she’s all he’s got. They bicker about their criminal acts and he points out how she’s walking around free after doing far worse than he has. She offers to remind his father that he can help him with his legal woes. But she will only help him if he agrees to her terms. He refuses to trust her. After she leaves, Esme comes in. Spencer tells her that Ava offered him a bad deal. She urges him to just let Ava think she’s won. He refuses. A cop arrives and leads him to his cell.

Back at Wyndemere, Nikolas still doesn’t know what to do about his son. Kevin suggests he can bail his son out or make him take responsibility. Ava arrives and chimes in, saying that his son has not learned his lesson yet. He thinks a night in jail could turn him around… but he worries he might never back down and his family’s worst patterns will live on.

On the next General Hospital: Peter tries talking his way out of danger, and Jason tells Scott he’s the one who will find Obrecht. 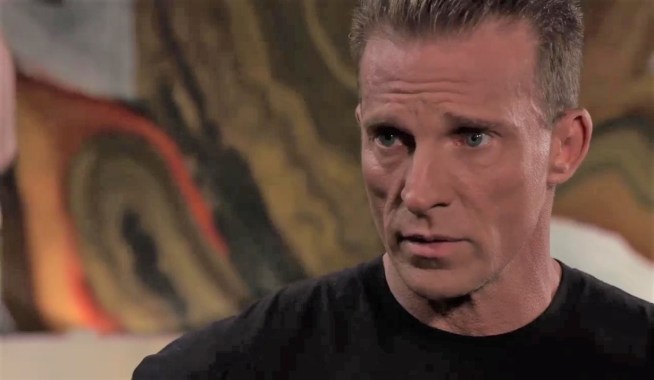 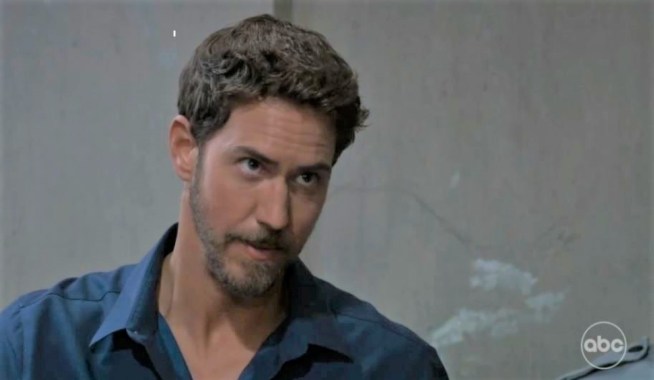