Monday, September 20, 2021: Today on General Hospital, Jason and Carly attend their reception following the explosion at the church, Brook Lynn asks Chase to stay, and Anna tracks down Peter. 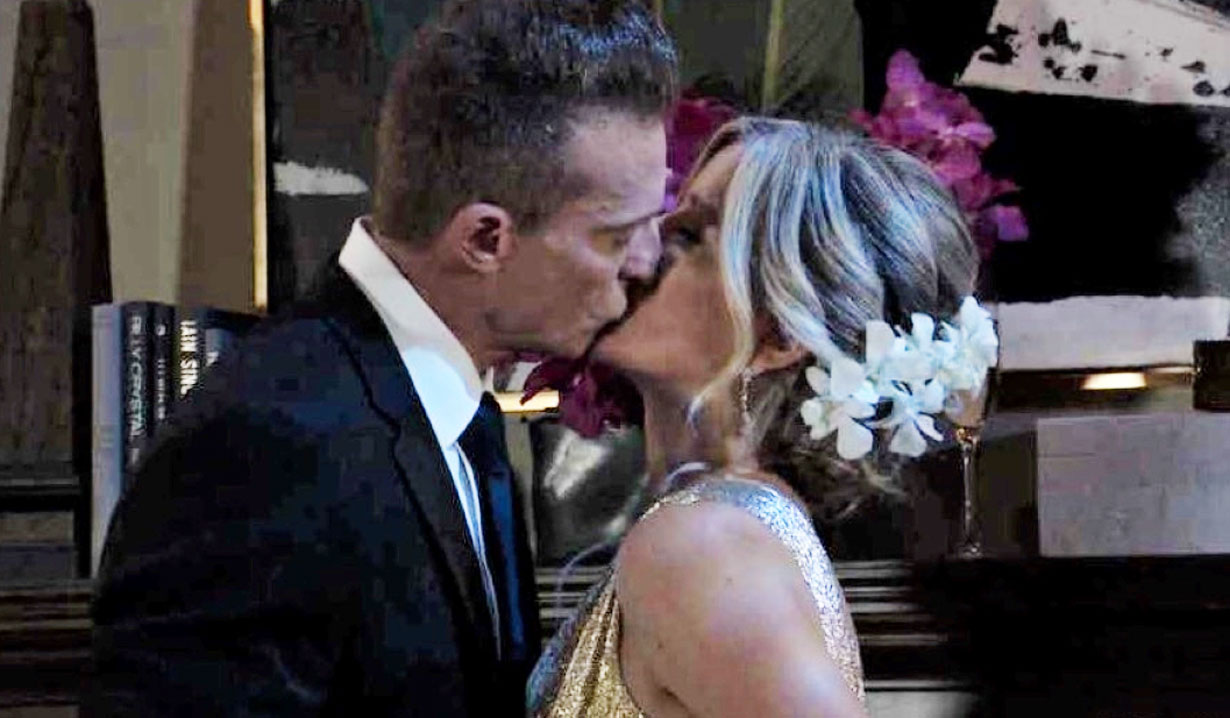 An explosion goes off outside of All Saints church. In their car, Jason tells Carly that, thanks to a tip from Nina Wu, he had Spinelli and Brick reroute a bomb from their car to Vincent and Charles. Nina Wu joins them and says she wants nothing to do with Renault and his machinations. She congratulates them on their marriage and leaves. Jason tells Carly they are going to the reception. He’s sure she’d like to dance. 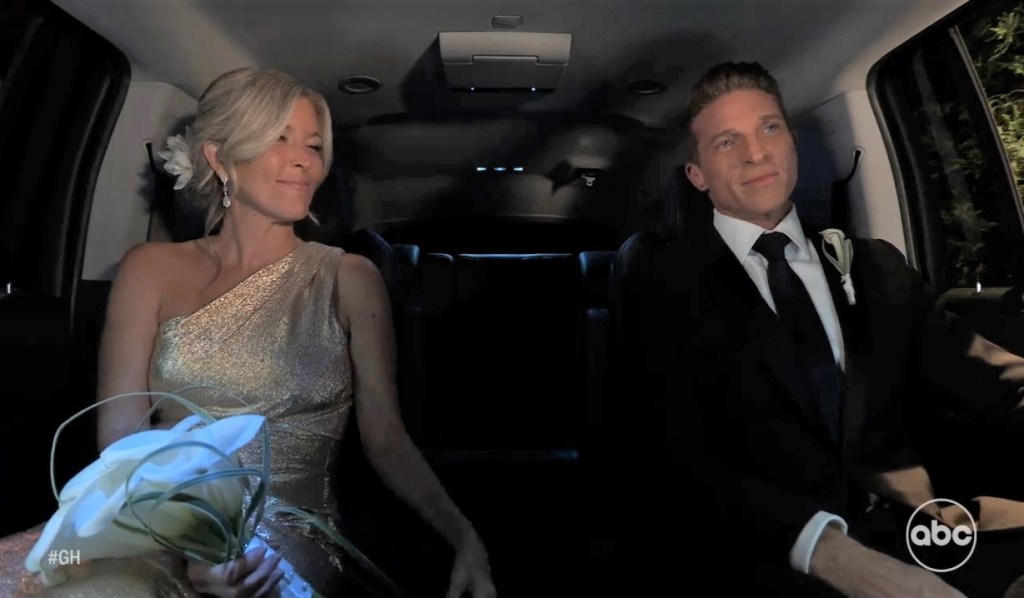 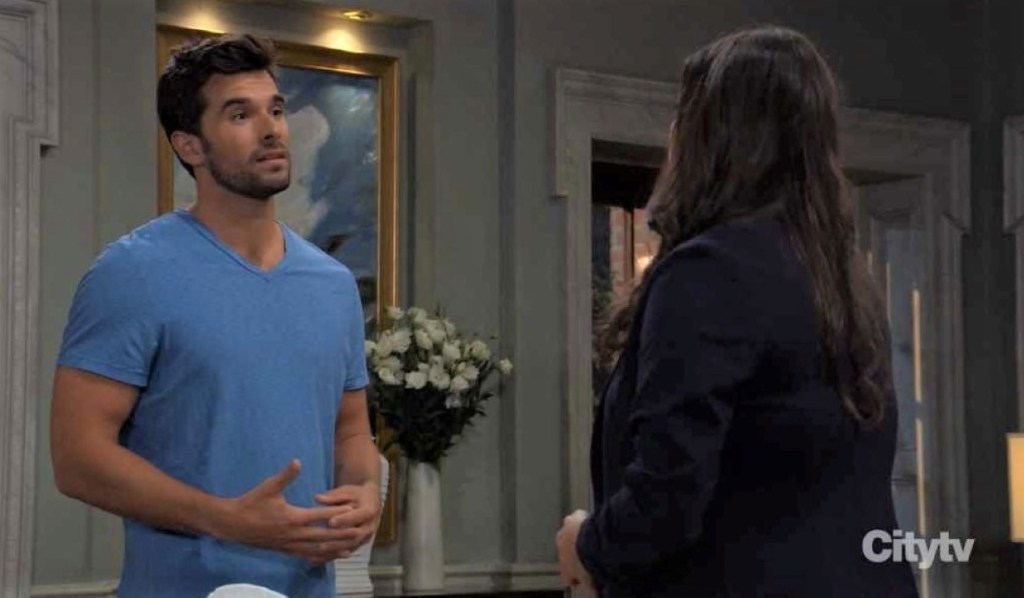 Chase drops by the Quartermaine estate with a gift for Monica and finds Brook Lynn with Bailey. He admits he’s missed them since he moved out. As he holds the baby, he tells her she doesn’t look much like her mother or father. She grabs the child away and the topic turns to him annulling his marriage. He’s glad he married Willow because it gave him the strength to survive. He could never regret being with someone who gave him so much joy. The cop admits the real reason he stopped by was to apologize to her family for helping Austin. Brook Lynn says Michael thinks the papers he found won’t amount to anything. She has some tricks up her sleeve either way. Sitting down, she admits she was relieved to see him getting down in the mud like everyone else, even if he’s bad at it. Before he can leave, she asks him to stay the night. 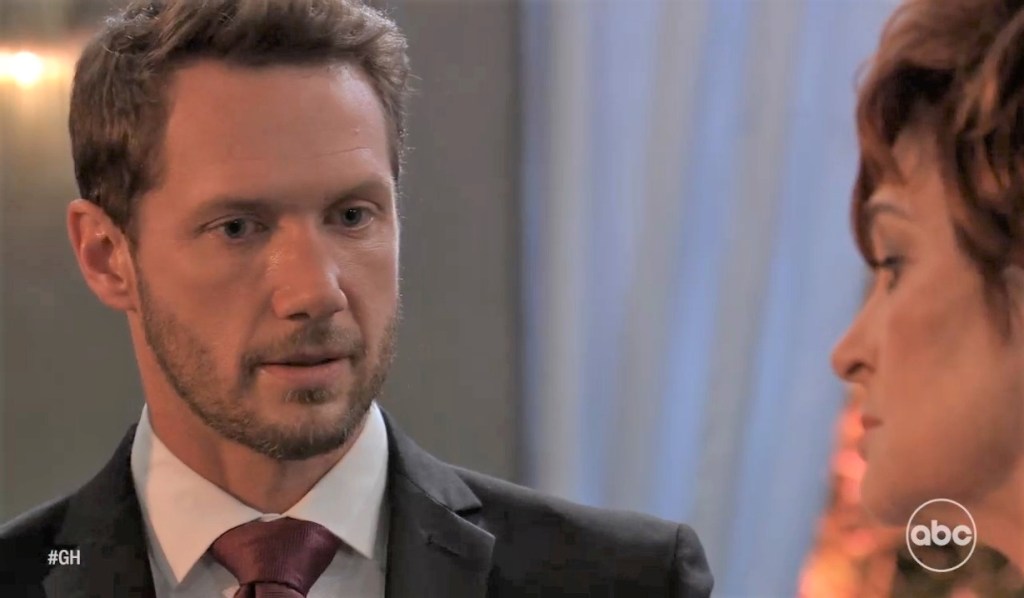 The guests gather in the garden, amazed by how good it looks and how borderline gregarious Jason was tonight. Brando finds Spinelli telling Diane about the explosion that just happened at All Saints. Spinelli is vague on the explanation. Maxie interrupts to remind Spinelli to get to his MC work. He’s happy to see she’s more like her old self. She’ll be happier if the newlyweds show up. Brando joins his mom and tells her that Vincent won’t be coming. 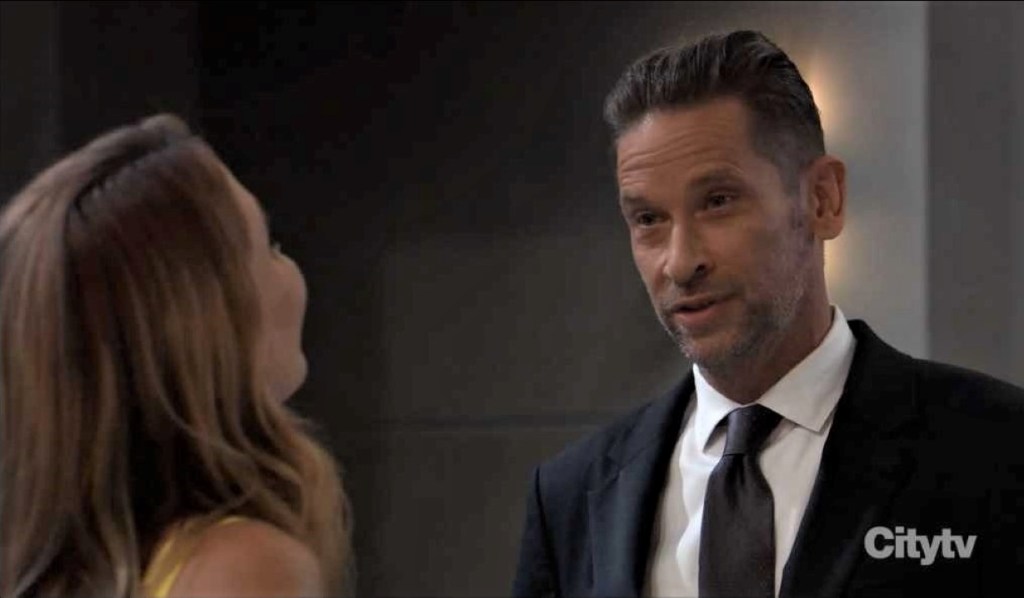 Olivia starts laying into Austin about Leo. The doctor suggests she should discuss this with her husband and walks off. Austin brings Maxie a drink. She panics that the bride and groom aren’t coming. Spinelli gets on the mic and presents Carly and Jason to applause. They dance and then Michael gives a speech about how lucky they all are to have Carly in their lives. They toast to family. Austin tells Maxie that everything has worked out and she can rest on her laurels. She’s not sure how to do that. Diane gives Jason a hug and congratulates him, wishing him every happiness. The lawyer wanders off as Jason and Spinelli discuss the bombing. Spinelli worries the police might crash the wedding and that would break Maxie’s heart.

As Bobbie and Joss congratulate Carly, Ned and Olivia return to bickering about Leo until Spinelli calls everyone up to catch the bouquet. Olivia almost goes but Ned reminds her she’s still married. She sometimes wonders why. Willow catches the bouquet. Monica catches Jason and Carly on the way out. She tells him she just wants them to be happy and sends them off with a hug. Liv runs up to Monica and asks her for a ride home. She makes it clear that things are not going well with Ned. When she returns to Ned, he urges her to consider having the child they both love checked out.

Michael and Willow dance. She tells him catching the bouquet doesn’t mean anything. If they get married again, it will be real. 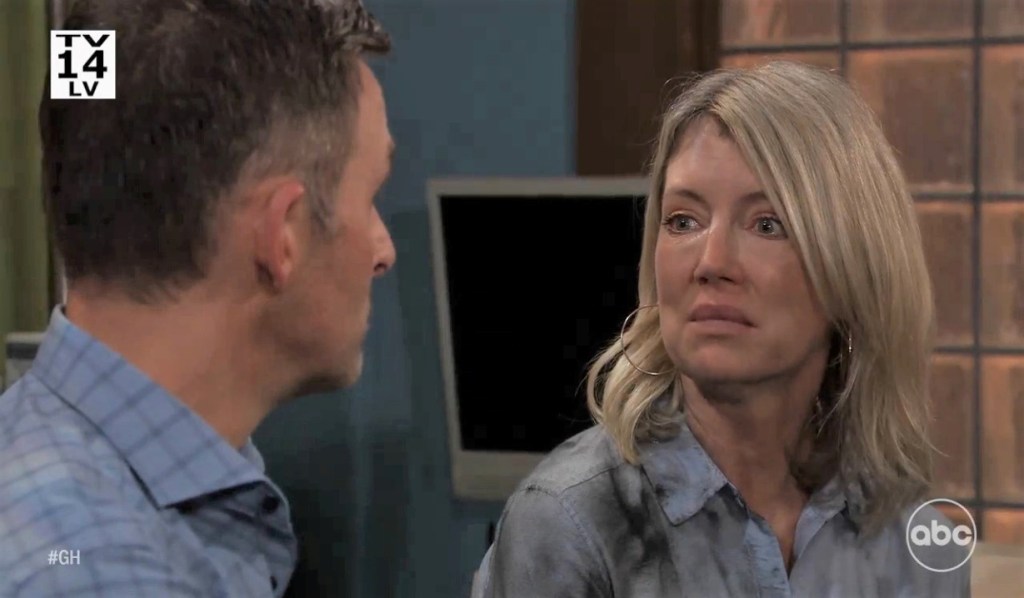 At the clinic, Sonny screams in Nina’s face as she repeats that she loves him. He insists she loves “Mike” and he’s going to see his wife. She steps out of his way. Jax offers to give him a lift home, saying he’s sorry for what happened. After Sonny exits, Valentin and Anna arrive. Nina admits to them that Peter forced her to call them before he set fire to the Tan-O. Liesl was supposed to deal with him but something went wrong. Nina admits that Peter was blackmailing her. Nina is sure that Peter is headed back to Port Charles and after Maxie. Anna makes some calls and gets a lead before she and Valentin head out. Jax tells Nina that he’s tried calling Maxie but she hasn’t been picking up. She panics and calls Maxie, finally getting through and warning her that she saw Peter. 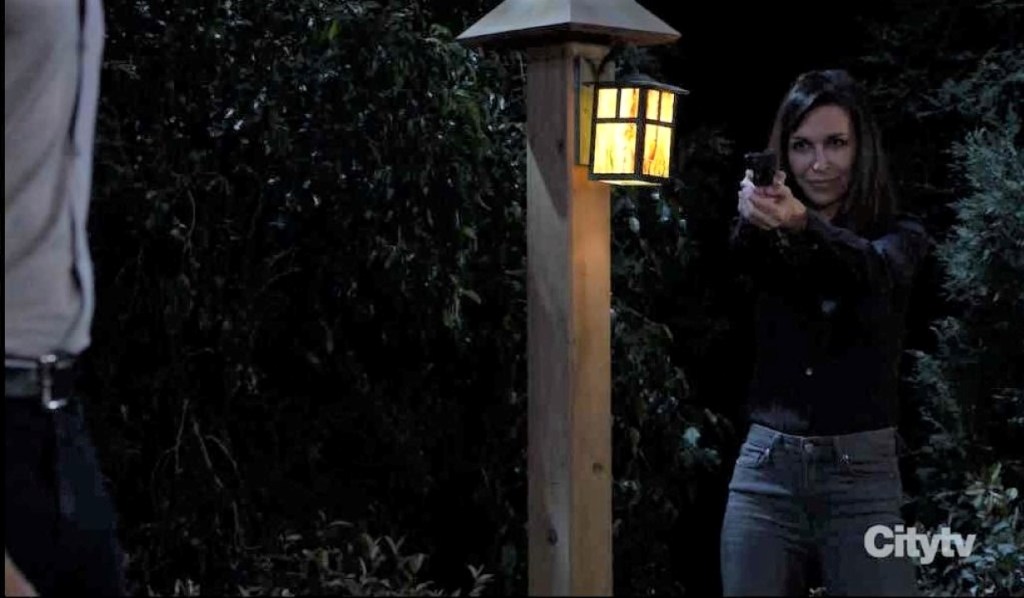 Nina and Valentin track down the car Peter rented and abandoned on the road. They are both armed and he makes it clear he will shoot Peter on sight. After they split up, Anna soon tracks Peter down and points her gun at him.

Jason and Carly go to their room in the Corinthos compound. They toast and say this feels right. He takes her hand and tells her they don’t need to rush things. They exchange I love yous and kiss. Sonny arrives downstairs. After waking through the house, he heads up the stairway.

On the next General Hospital: Chase and Brook Lynn grow closer.

Get your free daily soap-opera fix for General Hospital — and all of the other daytime dramas — delivered straight to your email inbox by signing up for Soaps.com’s newsletter. And don’t miss our gallery of Laura Wright through the years. 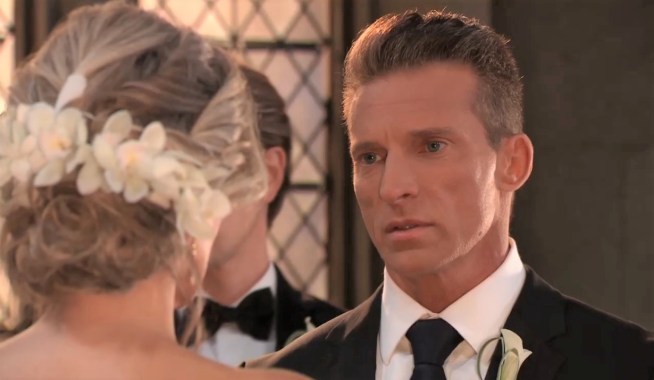 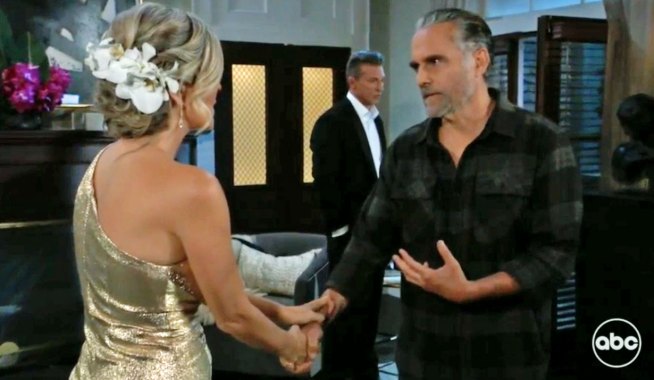