Tuesday, September 14, 2021: Today on General Hospital, Sam thinks Harmony could help her track down Drew, Drew and Nurse Chloe try to escape, and Joss is suspicious of Spencer and Esme. 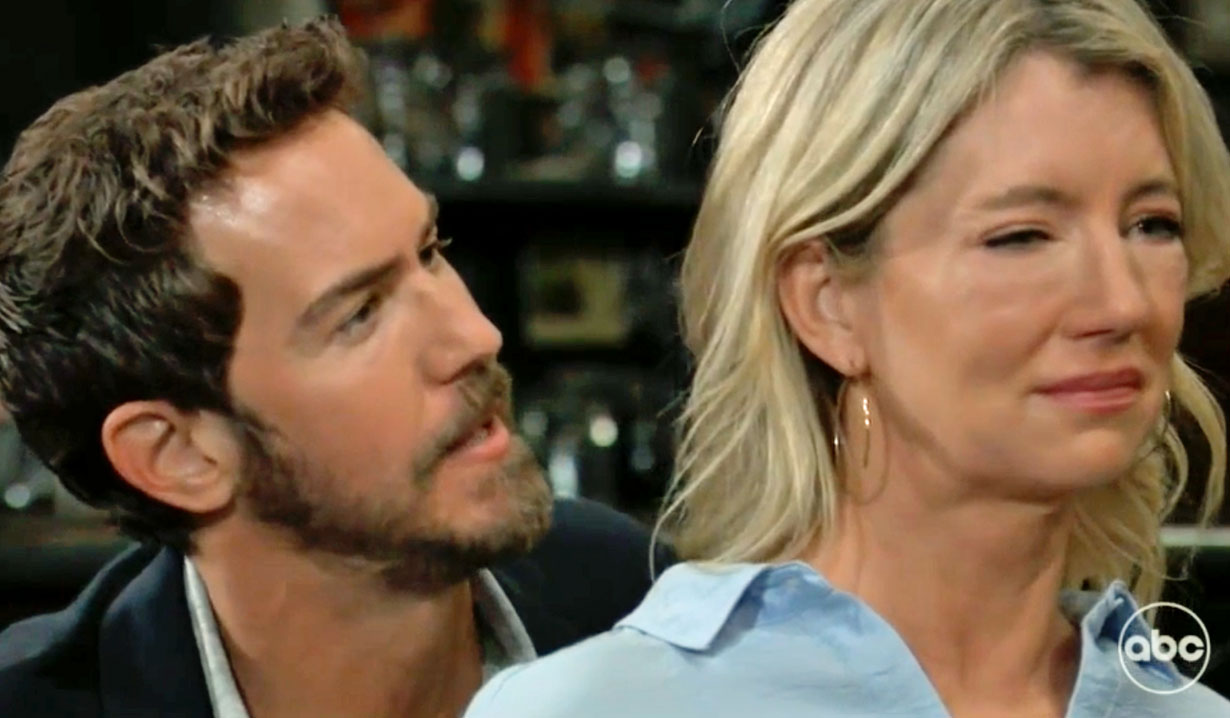 At Springridge, Alexis talks to Harmony about Ryan, who is in his room resting. Harmony brings up Spencer’s girlfriend Esme. She calls her trouble and wonders why Esme was so fascinated with Ryan. She even notes that it appeared the girl was upsetting him. Alexis doesn’t understand how a teenager could upset a sociopath. Harmony believes her innocent act is a cover, and she’s just the kind of person Shiloh liked to collect for Dawn of Day… vicious like a viper behind the smiles. 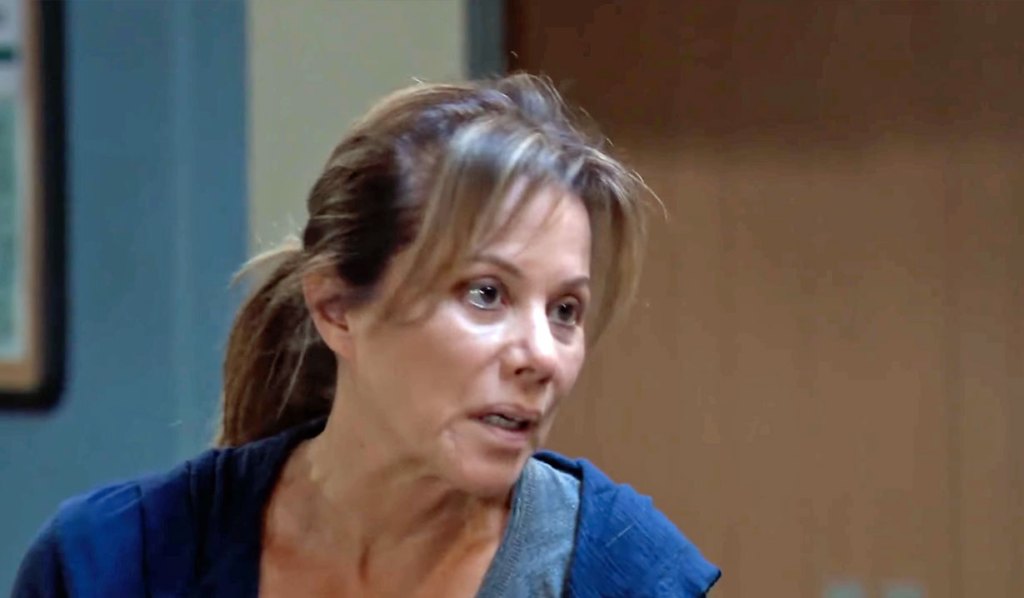 At the batting cage, Sam gives Dante some coaching on his batting stance. She also suggests he work on his home run victory trot. He thinks she should work her’s too because she has something to celebrate now that her parole is over. She thinks about what got her into prison in the first place and wonders if Shiloh knew what Peter may have done with Drew. Dante points out Shiloh is dead, but Sam mentions his side-kick Harmony, who would do anything Shiloh asked her to. They take off to speak to her. 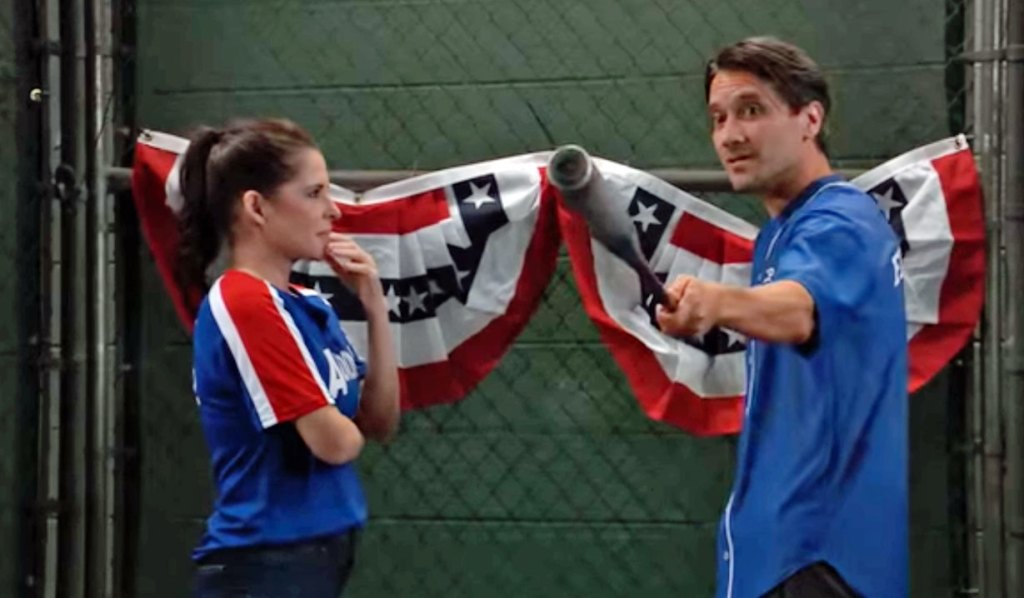 Sam and Dante arrive at Springridge and reveal to Alexis that they need to speak to Harmony about a case they are working on. Harmony swears she is working hard to clean up her life and doing nothing illegal. Sam explains they aren’t accusing her of anything, and that they actually need her help. 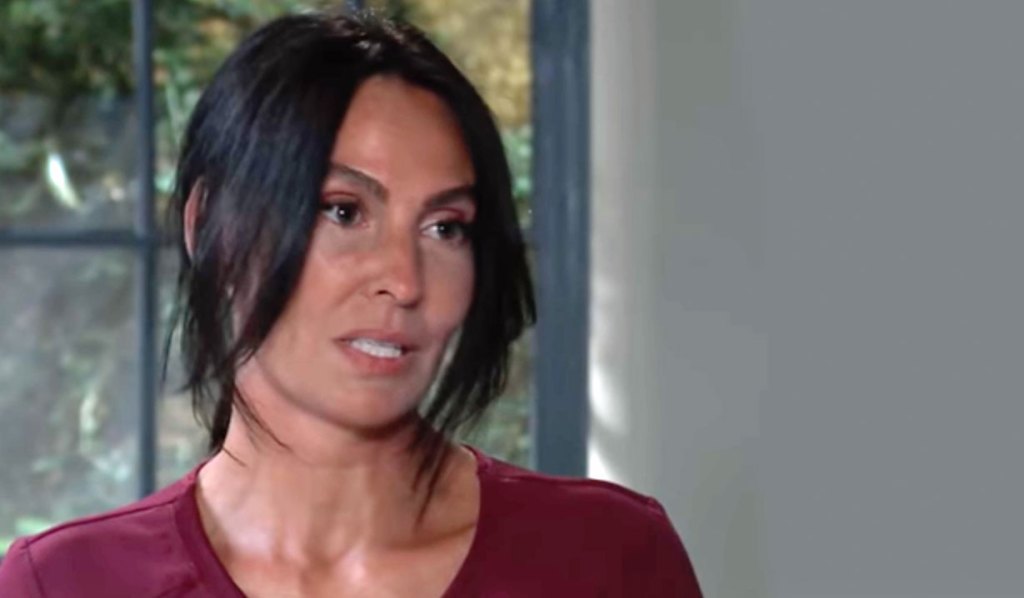 In the remote prison, Chloe checks Drew out and says his ribs don’t appear to be broken, just bruised. She doesn’t understand why Drew didn’t use the pen to pick the lock and escape, but he wasn’t about to leave her behind. They discuss the guards, who Chloe notes by their accents are from all over. Drew believes they are mercenaries for hire which could work to their advantage given they likely have no loyalty to their boss. When a guard bangs on the door, Chloe tells Drew to start moaning. He does, and Chloe explains to the guard that Drew’s lung has been punctured and needs a doctor. The guard goes to check on Drew, who quickly clobbers him. 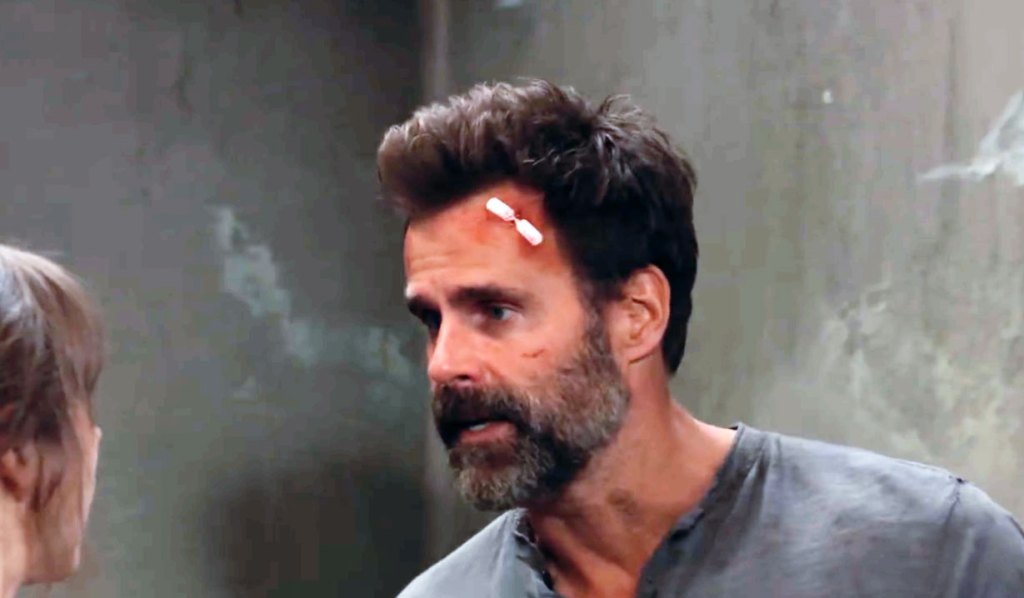 Drew and Chloe grab the guard’s keys and Chloe unlocks Drew’s cuffs. They lock the guard in the cell and make a run for it. As they are almost to freedom and trying to unlock the door out of the compound, which Chloe reveals leads to a courtyard with cars, another guard catches them. Drew attacks the guard and knocks him out. Suddenly the alarm sounds and Drew realizes they’ve likely found the guard in his cell. Drew gets the door open and tells Chloe to take one of the cars and go to a consulate or embassy for help. She takes off, and Drew is beaten by two more guards who appear. The sound of a car speeding away is heard in the distance. 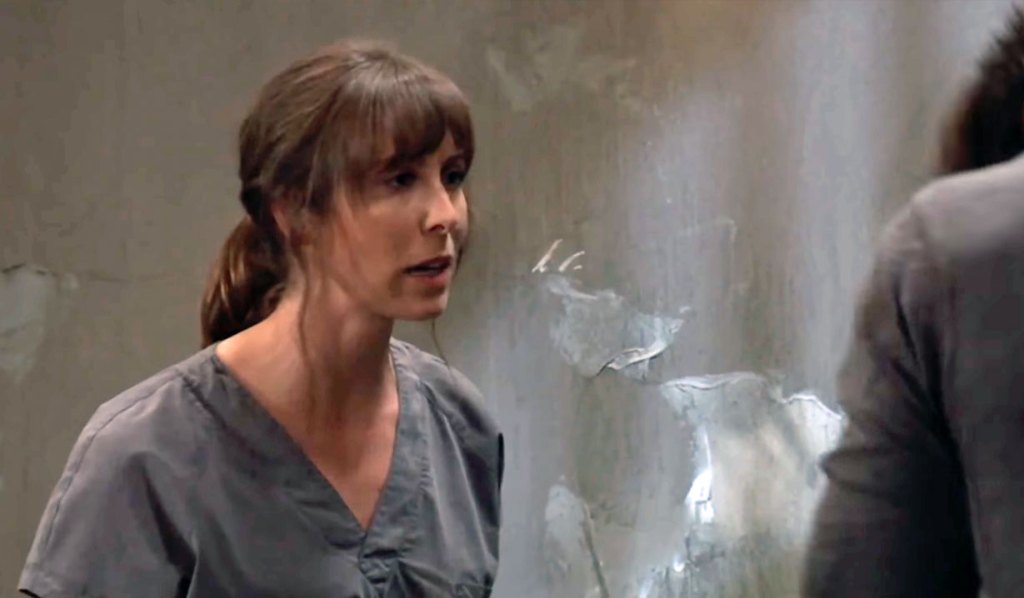 At the Metro Court, Joss confronts Spencer about pretending to be Victor and says he’s as selfish and dishonest as ever. They bicker, and Joss accuses him of using Trina and has no idea what friendship means. Spencer says he had a plan to stay low and under the radar until he was ready to deal with his father, and he never meant to meet let alone involve Trina. Joss tells him that he got Trina to like him and that’s how he got her to keep the secret. Spencer asks if Trina said she likes him. Joss wonders why he cares. Spencer admits he likes Trina too. 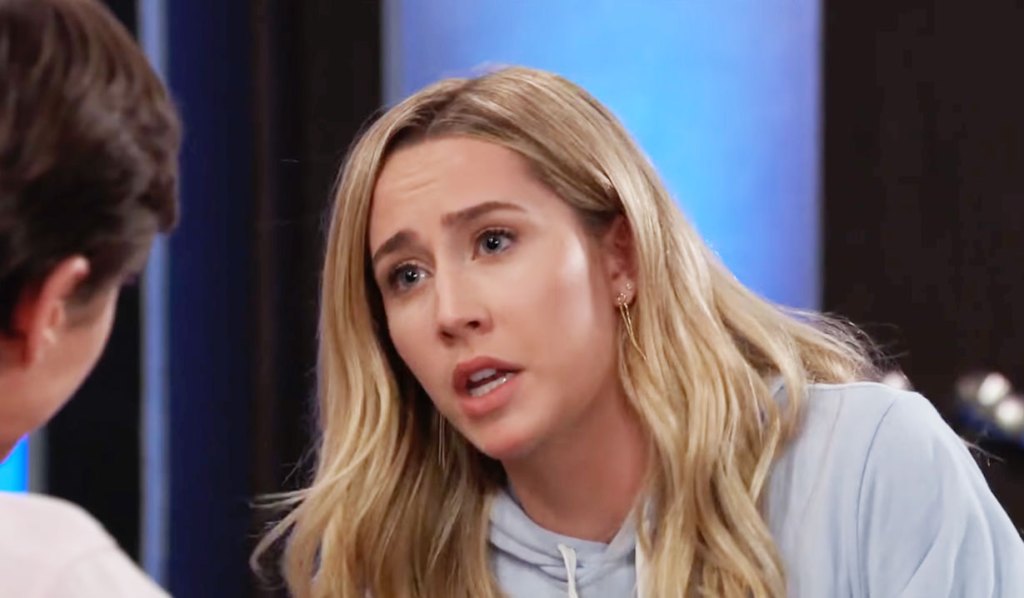 Esme joins the two and asks what she missed. Spencer tells Esme that Trina told Joss that she knew he was in town before others and using a fake name. Esme thinks Trina must be so disappointed in him and suggests Spencer apologize for how he treated Trina. Spencer is shocked and says, “As if I did this all by myself.” Joss wonders if he had help. Esme quickly covers and says she is partly to blame because should have arrived earlier in Port Charles and made it clear that Spencer had a long-term girlfriend. Joss takes off to get ready for the wedding, stops at the elevator, and looks back at them with suspicion. 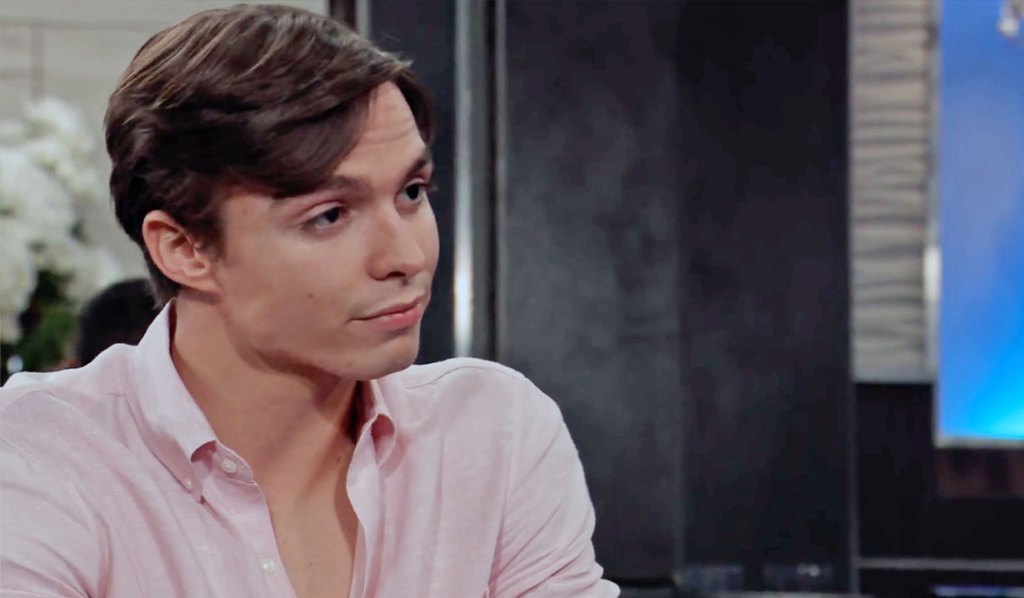 In Nixon falls, Jax finds “Mike” searching the woods for his phone and quickly realizes Nina hasn’t told him the truth. They argue, and “Mike” doesn’t care who he was, all he cares about is his future with Nina. Jax tells him that the past always catches up with you, and today is his day. Jax reveals this is much more than just about Nina, it’s about the two of them. He lets “Mike” know that Nina isn’t the first or second woman they’ve fought over. “Mike” realizes Jax knows who he is, but he doesn’t care because all he wants is what he has with Nina there in Nixon Falls. Jax pushes him to go see Nina so she can tell him the truth. “Mike” warns Jax to stay away from Nina and storms off. 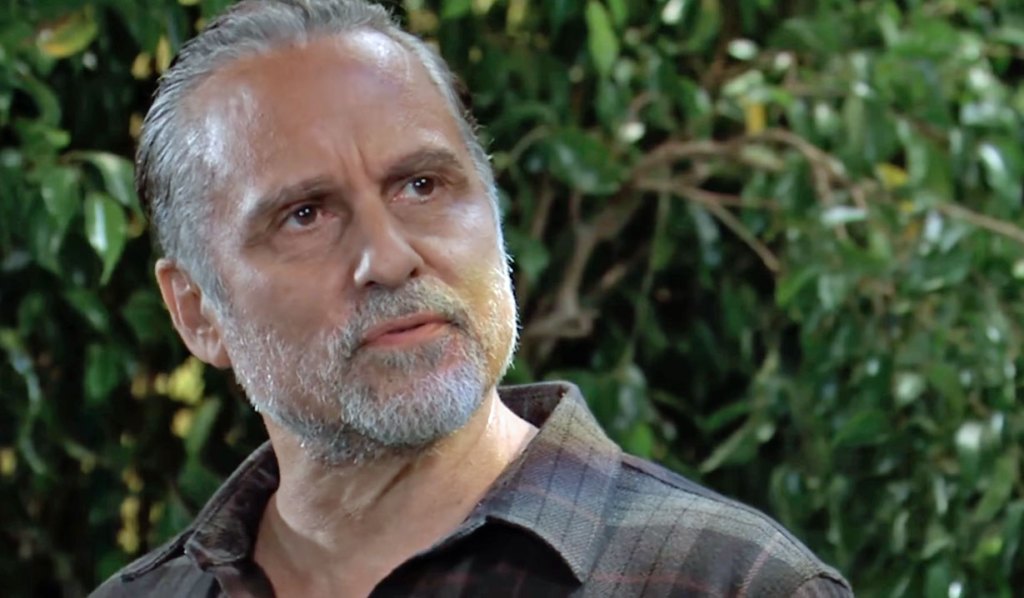 In the Tan-O, Peter holds Nina and Phyllis at gunpoint. He tells them that they will never leave the bar again. Nina calls him an insecure bully who is all talk and warns him that Valentin will tell the police that she’s in danger. Peter plans to be gone long before the law shows up. Peter orders Phyllis to go get some rope and duct tape, and if she isn’t back in three minutes then Nina’s blood is on her hands. 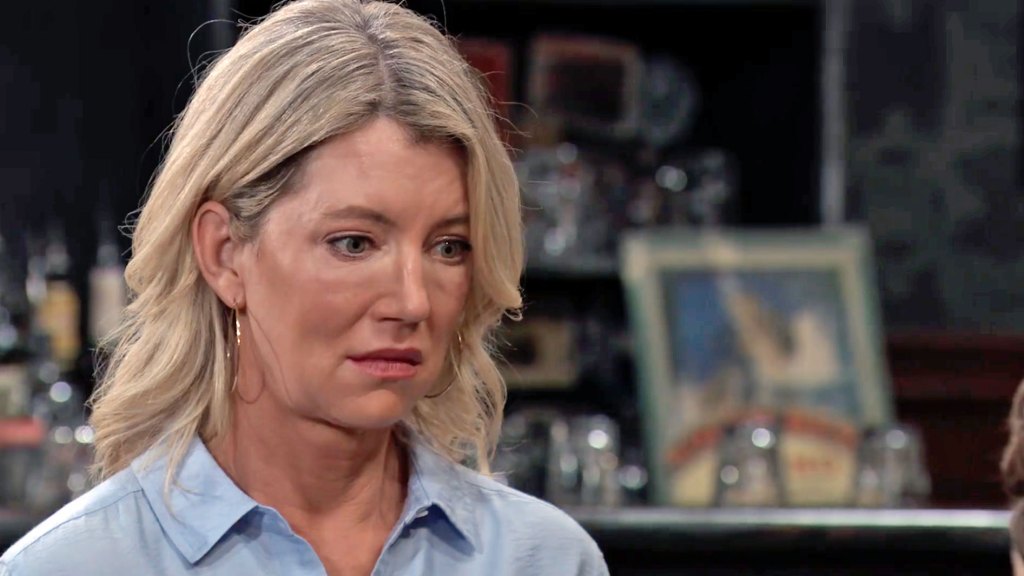 Once alone, Peter gloats to Nina that she should feel lucky that he’s freeing her of having to tell Carly the truth, and maybe she’ll be reunited with Nelle in hell. As Peter’s three-minute alarm sounds, he prepares to shoot Nina. Fortunately, Phyllis returns, and Peter orders her to tie Nina up. As she does so, Nina warns Peter that “Mike” will be back soon. Peter says she means Sonny. He relishes in revealing to Phyllis that Nina knows “Mike’s” wife and his kids and chose to lie about it. Peter stuns Phyllis with the truth that “Mike” is Sonny Corinthos, a man with a grieving wife and children back in Port Charles. Phyllis can’t believe this is true. Nina tries to justify what she did because “Mike” is a much better person than Sonny ever was. Peter thinks it’s time she finally shuts up and duct tapes Nina’s mouth. 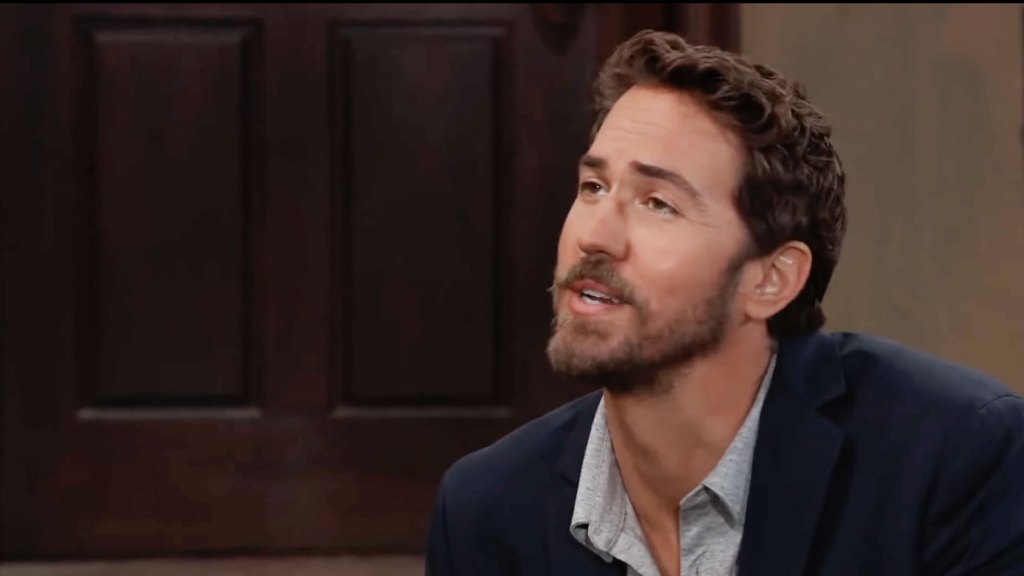 Peter pours gas around the bar and tells Nina that she did this to herself. He points out on the bright side, he, Maxie, Louise and James will live happily ever after. Peter strikes a match and sets the bar ablaze.

Later, Mike returns to the bar and finds it on fire, and struggles to get to Nina and Phyllis who he can see inside surrounded by flames.

On the next General Hospital: Mike tries to save Nina and Phyllis. Jason and Carly’s friends and family gather at the church for the wedding. And Drew says to one of the guards, “So that’s who your big boss is?”

Get your free daily soap-opera fix for General Hospital — and all of the other daytime dramas — delivered straight to your email inbox by signing up for Soaps.com’s newsletter. And don’t miss our gallery of gifts for soap fans.

Image: My Love Store: Gifts With A Heart/Amazon
1/10

<p>With this pillow on your couch — or bed — it’ll be clear to all just how much you love your soaps! <a href="https://www.amazon.com/My-Love-Store-Daytime-Multicolor/dp/B08YRHHPWF/?tag=soaps0f6-20" target="_blank">Get the pillow details</a> to order one today.</p>

<p>Everybody knows that <em>General Hospital’s</em> Sonny Corinthos is the true Godfather of Port Charles. Adding this <a href="https://www.amazon.com/Daytime-Godfather-Corinthos-Hospital-Television/dp/B094721Z6P/?tag=soaps0f6-20" target="_blank">wall art of your favorite mobster</a> to your entrainment space would be a great conversation piece.    </p>

<p>What contains two words, ten letters and a whole lot of drama? Soap operas! Test your knowledge by searching for fun phrases from your favorite daytime and primetime soaps by <a href="https://www.amazon.com/Word-Search-Soap-Operas-Classics/dp/1688060014/?tag=soaps0f6-20" target="_blank">picking up your copy</a> of the 70 page book.</p>

<p>No matter which Genoa City couple you’re rooting for, every <em>Young & Restless</em> fan will stay warm and cozy with this super-soft daytime fleece blanket. You can <a href="https://www.amazon.com/WUKON-Super-Soft-Flannel-Fleece-Restless/dp/B08JQ3SZSC/?tag=soaps0f6-20" target="_blank">order one for you — or a friend</a>.</p>

<p>We all know keeping calm maybe be hard to do, especially when there are villains running around daytime and terrorizing our beloved characters. Hey, you never know, <a href="https://www.amazon.com/Keep-Watch-Operas-Accent-Gifts/dp/B08QVS7WK3/?tag=soaps0f6-20" target="_blank">a hot beverage in this mug</a> just might help to calm your nerves. </p>

<p>Set the ambiance for a day of drama by lighting a <em>Days of Our Lives</em> candle. It’s said to smell like everything from bring brainwashed to being stalked by a strangler! This is <a href="https://www.amazon.com/Lives-Scented-Candle-Novelty-Culture/dp/B083FD823X/?tag=soaps0f6-20" target="_blank">the perfect gift</a> for that Salem fan in your life.    </p>

<p>Do you watch soaps from the kitchen while doing dishes? This takes fandom to a new level and will help clean up even the dirtiest, soapy situations! View the <a href="https://www.amazon.com/PELEG-DESIGN-Kitchen-Scrubber-Organizer/dp/B06ZY4MHMR?tag=soaps0f6-20" target="_blank">different options for this fun tool</a>.    </p>

<p>Sip your coffee or tea in style — Forrester-style! You’ll feel right at home at Forrester Creations fashion house with this <a href="https://www.amazon.com/Forrester-Creations-Ceramic-Catering-Porcelain/dp/B089R2ZJMX?tag=soaps0f6-20" target="_blank"><em>Bold & Beautiful</em> mug</a>. </p>

<p>You’ll likely open the door to many conversations when <a href="https://www.amazon.com/Lover-Shirt-Reading-Opera-Tshirt/dp/B07H92KQPJ/?tag=soaps0f6-20" target="_blank">wearing this soapy shirt</a>. And let’s face it, at one point or another, our favorite character will die, come back from the dead, die again and… repeat! </p>

<p>Were you a fan of the 1970s/1980s sitcom <em>Soap</em>? If so, or if you know someone who was, <a href="https://www.amazon.com/Soap-Complete-Season-Katherine-Helmond/dp/B00LAFWM82/?tag=soaps0f6-20" target="_blank">here is the complete four-season DVD box set</a> to relive all of the memorable moments surrounding the families of Dunn’s River, Connecticut.</p> 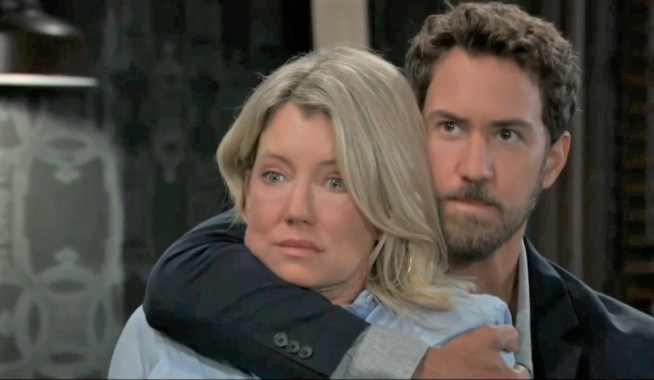 Peter Threatens to Kill Nina and [Spoiler], As Valentin Realizes She's in Danger

As [Spoiler] Saves Phyllis and Nina, "Mike" Is Left for Dead in the Burning Tan-O 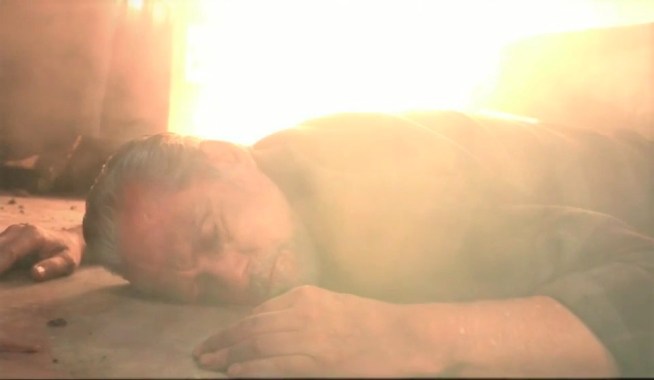