Spencer’s Crazy Girlfriend Esme Is Fascinated by Meeting Ryan — Plus, Jason and Carly Lean In for a Kiss

Friday, August 27, 2021: Today on General Hospital, Obrecht concocts a plan to deal with Peter, Mike gets a feeling about Peter, and Jason and Carly share a close moment.

Outside the Tan-O, “Mike” tells Peter that he seems to make Nina uncomfortable, and it’s probably time he gets out of town. Peter says they are simply rivals in publishing. “Mike” thinks he’s a poor liar. Phyllis approaches and scolds “Mike” for the way he’s treating Nina’s guest and apologizes for his protectiveness of Nina. 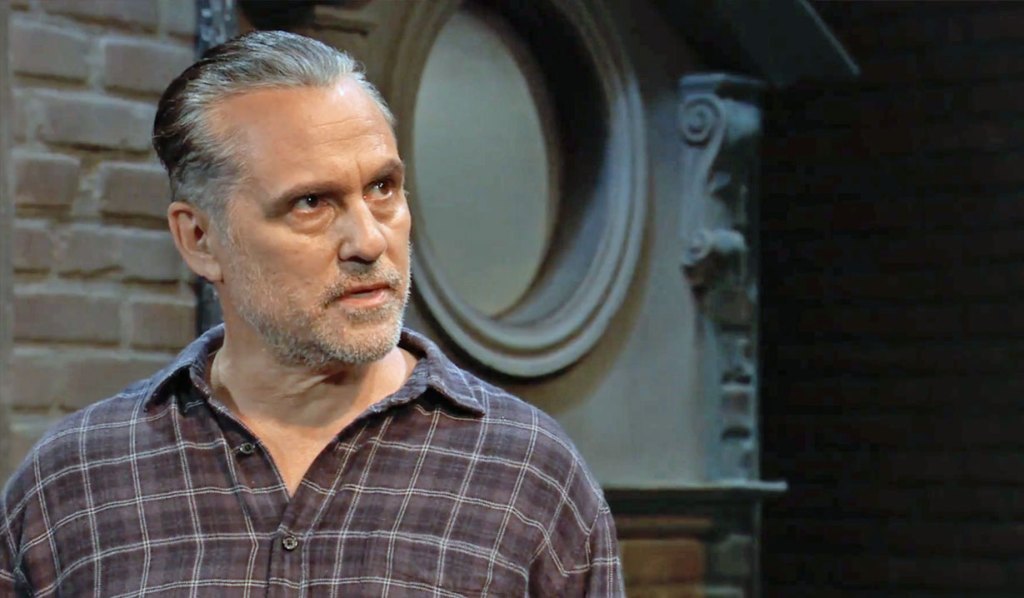 Peter returns to the bar as Nina gets off the phone, and he wonders if that was Valentin. She says it was Crimson business, but she will call Valentin soon. He again threatens to take James and ruin her life should she betray him. He reminds her how “Mike” is also Wiley’s grandfather, and Jax will hate that she’s playing footsy with Sonny. 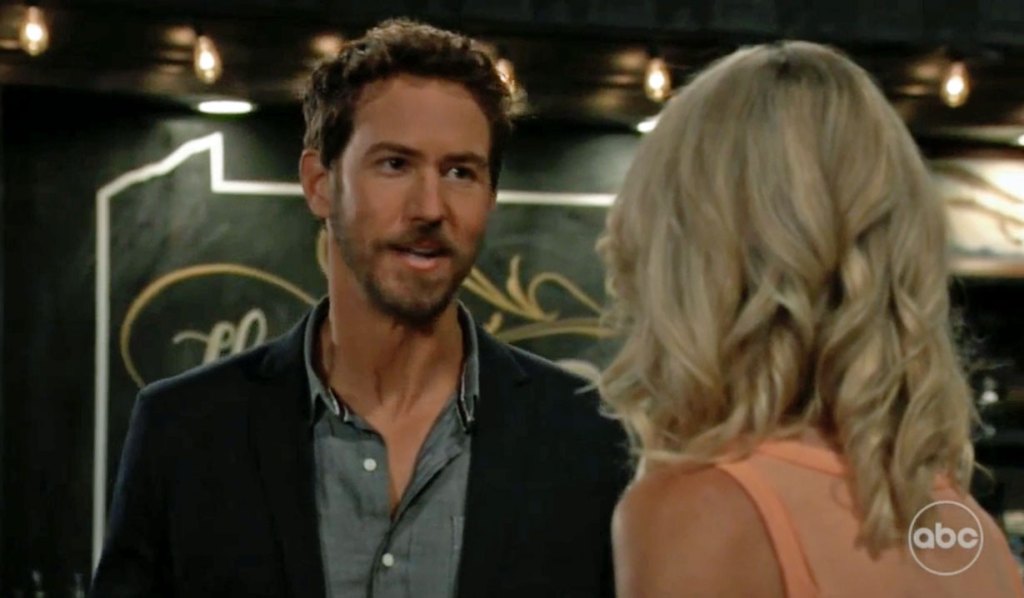 “Mike” and Phyllis head back into the bar, and Nina says she’s going to see Peter out. Once they are gone, “Mike” admits to Phyllis that he gets the feeling that Peter knows who he is. Back outside, Peter gives Nina 24 hours before the people she loves suffer the consequences.

Jax meets Carly at the Metro Court to apologize for making Joss’ diner awkward. He wants them to start over. Suddenly Jason and Mr. Buscema arrive. Buscema just received his wedding invite and tells Carly he wouldn’t miss it for the world. Jason and Buscema head to the bar, and Jax says if that guy is any indication of the guest list then Joss is not getting near the wedding. Carly calls him a business acquaintance, but Jax knows who the five families are. Carly says Joss will not only be at the wedding, but she’ll be also the maid of honor. 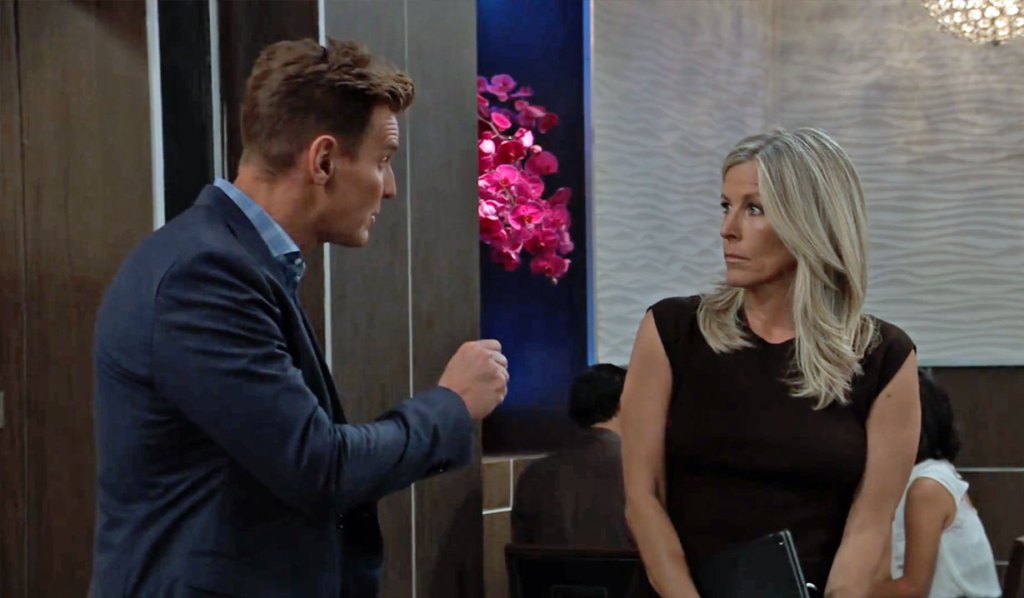 At the bar, Buscema tells Jason he agrees that the Novaks are a problem and need to rein Joey in. They agree on their position regarding the Novaks and shake hands. 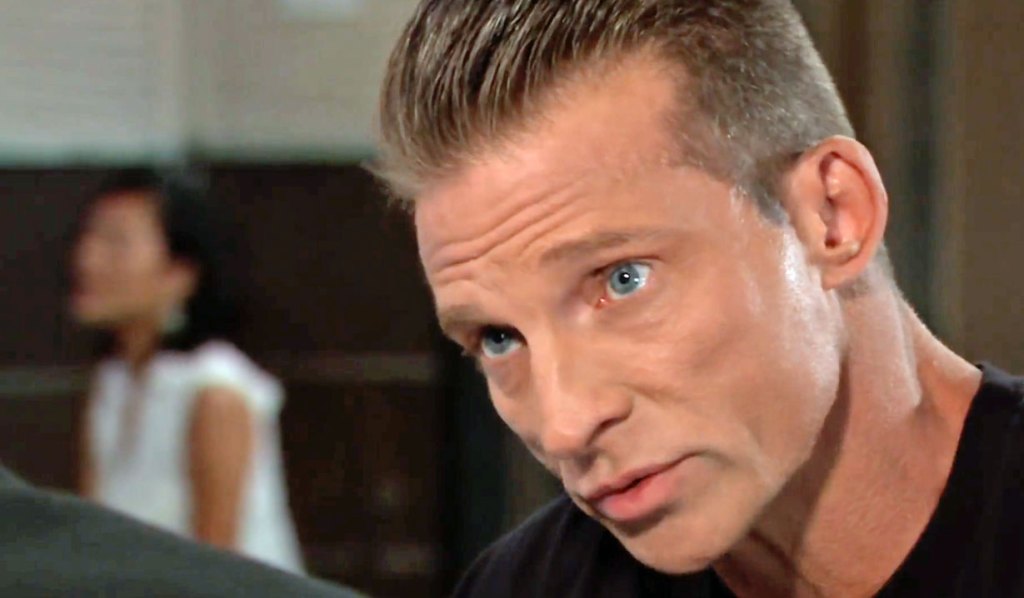 Buscema approaches Jax and Carly, wishes Carly well, and departs. Carly and Jax continue to argue, and Jax notes this wedding is nothing more than theater to shore up Sonny’s illegal business. He wonders if she’s comfortable putting their daughter on display for those mobsters. Carly orders him to leave. Jax says if Joss gets killed at least she has Sonny’s blood money to keep her warm. Jason approaches Carly after Jax leaves and implores a riled-up Carly to come with him.

Jason takes Carly up to the pool, which he cleared so they could talk. Jason feels the way Jax is acting it’s like he doesn’t know anything about her. Carly knows Jason does. They think about their past, and Jake’s, and Carly recalls seeing him there always made her happy. He always liked seeing her too. Carly convinces him to share a dance with her. They come close to kissing, but Carly pulls away and runs off to get back to work.

Back in the restaurant, Maxie runs into Austin at the Metro Court while looking for something she misplaced. He suggests the lost and found. Austin gets back to his table with Scott to talk business. Scott says the document he acquired is his ticket to gold. However, he warns Austin that this will probably take a while to cycle through the courts. In the meantime, Scott says he’ll be on a romantic getaway in Saint Lucia. 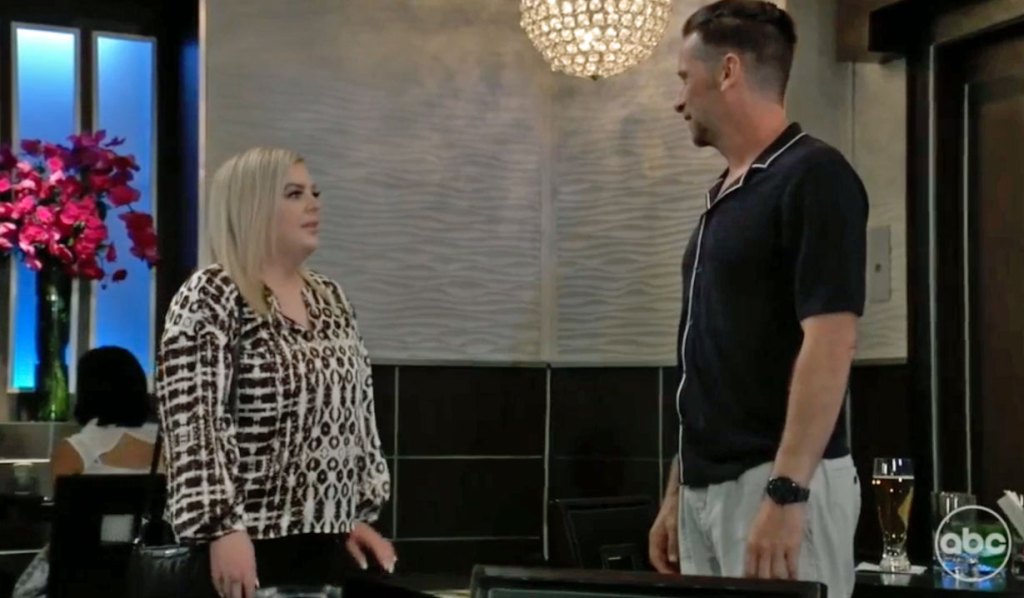 Maxie finds her wedding planner at the bar and then runs into Jax. He sees she’s back to planning weddings. She says she’s working on Jason and Carly’s wedding and says it’s so great. She immediately senses that Jax doesn’t share the feeling. He changes the topic to Nina and asks when she’ll be back. Maxie feels Nina is likely not coming back from Nixon Falls. Jax is confused, so Maxie reveals that Nina found someone special in Nixon Falls. She feels it’s time for Jax to move on because Nina has. 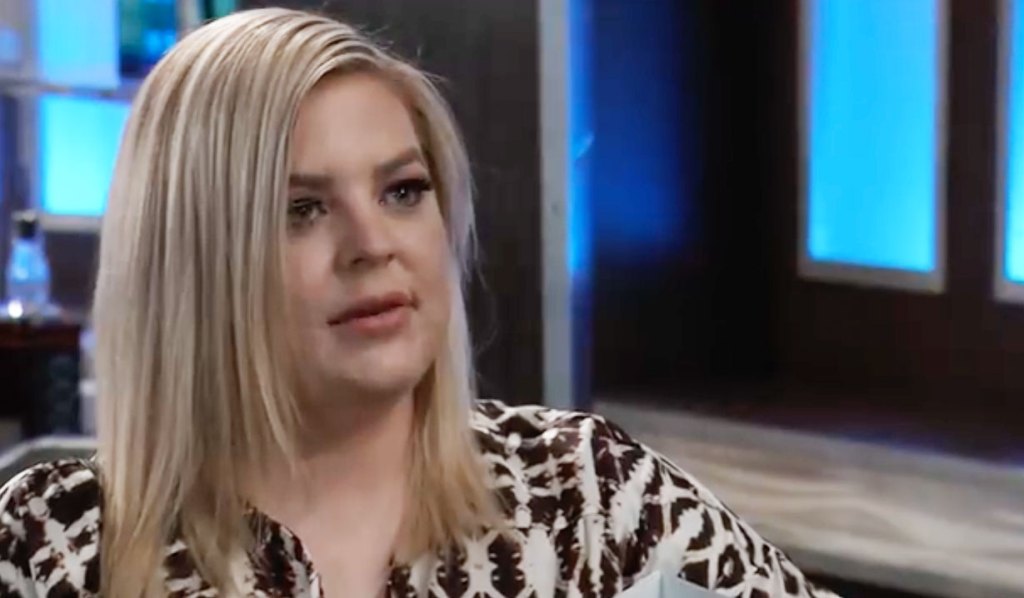 Scott runs into Obrecht and gushes excitedly about their trip. She explains this might not be the best getaway for them. Scott thinks she’s worried that because it overlaps with a medical conference that she’ll be busy, but if doctors are anything like lawyers, they’ll never pay attention to who is sneaking out. This gives Obrecht an idea and she rushes off to make a call. 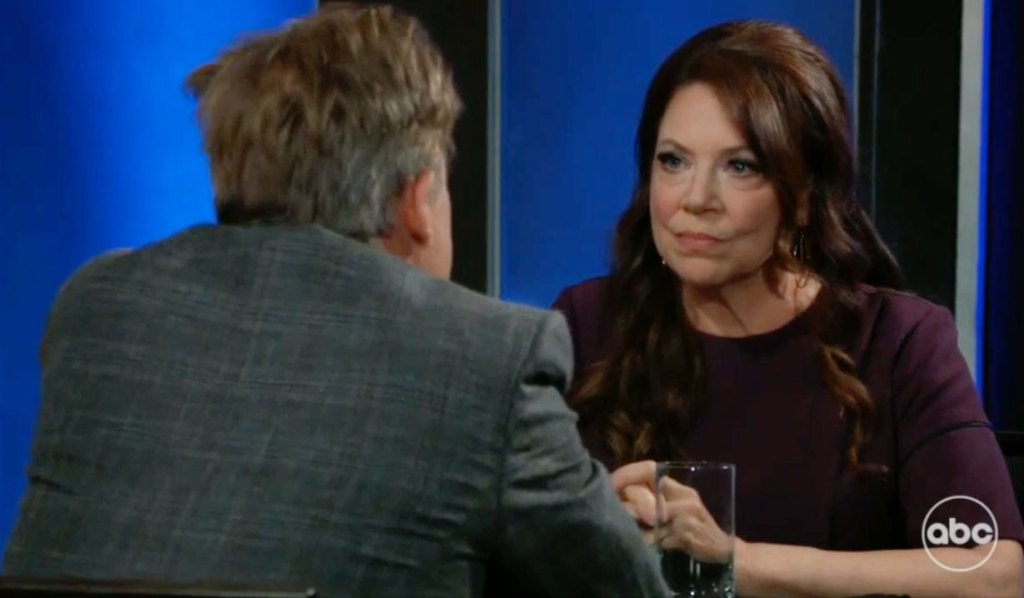 Obrecht calls Nina back and tells her to instruct Peter that Anna and Valentin have a lead in Saint Lucia. Nina wonders what is there. She says it’s a medical conference, and she’ll take care of everything from there.

Spencer and Esme visit a thrilled Alexis at Springridge. Spencer introduces Esme to his aunt and then notices Ryan in the corner. Spencer is at least glad he’s a vegetable. Alexis says he’s not, he has Lock-in Syndrome, which Esme knows all about. She claims she saw a true-crime documentary about the guy who had it. Alexis suggests they sit down and asks what’s going on between Spencer and his father. Esme decides to excuse herself to go to the vending machine in the lobby. Spencer fills Alexis in on what his father did to him. 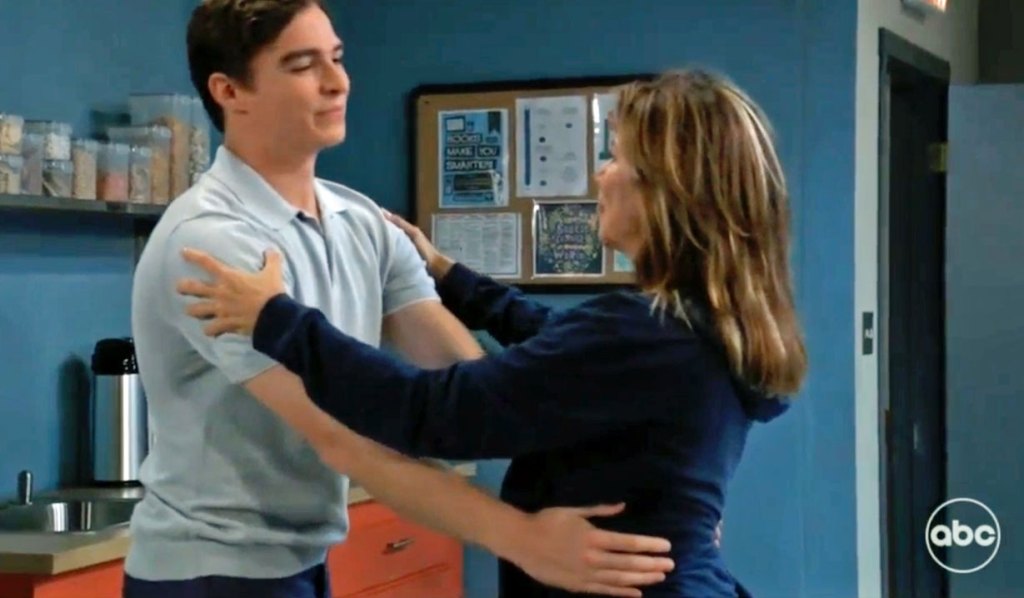 Esme finds Harmony outside reading to Ryan. She claims she just heard about Ryan’s syndrome but has no idea what it is. Harmony explains the details, and Esme asks to speak to him. She sits down, and Harmony translates Ryan’s blinking. She finds his condition fascinating and reveals she plans to go to medical school. Esme wants to volunteer there, but Ryan communicates, “Go, go, go!” She thinks there’s no way he wants her to leave so soon. Harmony suggests he may just be tired. Esme looks forward to coming back soon. 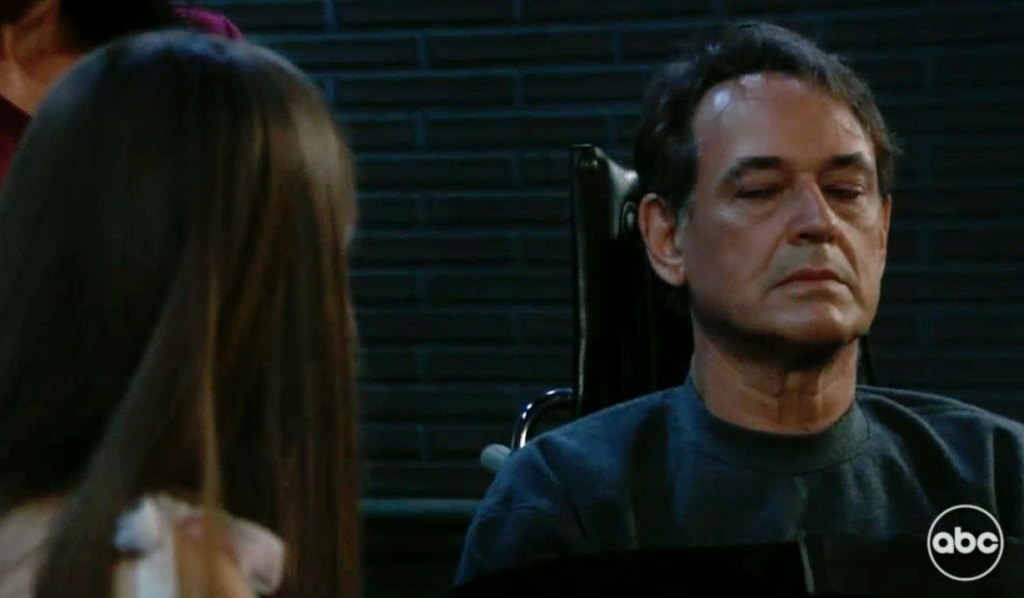 Esme returns to Spencer and Alexis and finds Alexis urging Spencer not to punish his father because he’s only punishing himself. She seems upset to hear this and points out it appears their time is up. Esme and Spencer leave, and she waves at Ryan on the way out. Harmony then warns Alexis that Esme is trouble, and her nephew should steer clear of her.

Ava visits Kiki’s grave and laments about not being able to protect her from Ryan. Nikolas approaches, and she reminds him they aren’t supposed to be together. Seeing he’s already there, she asks about Spencer. Nikolas admits he was wrong about Spencer being the stalker. He should have listened to Ava and not gone through with his plan. 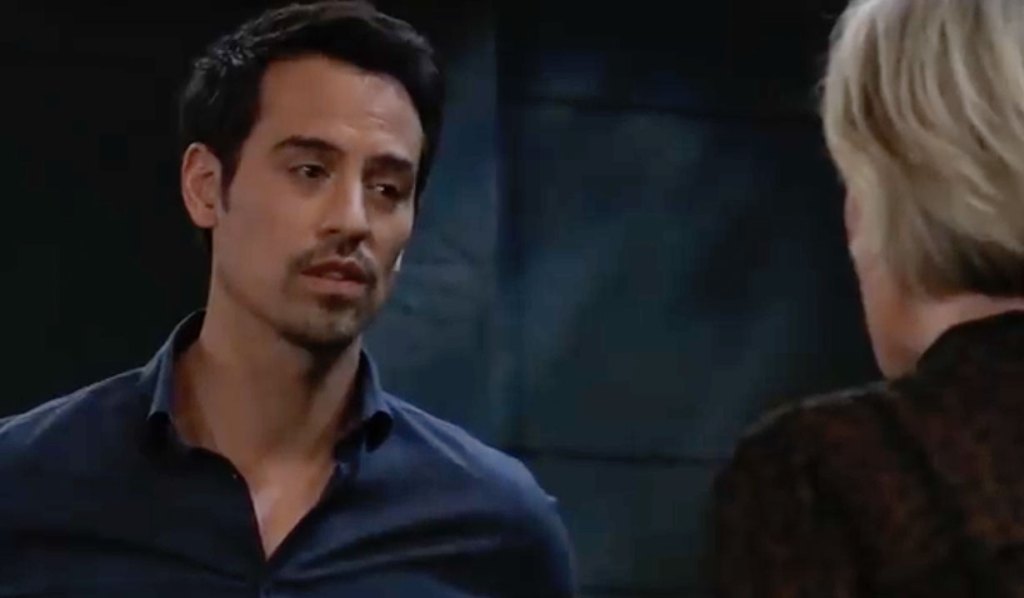 Ava pushes him to make peace with Spencer. Nikolas is trying, but Spencer and his girlfriend Esme moved in with his mother. Ava is shocked by this news and feels bad for Trina. Ava informs him that since they can’t stay away from one another, she plans to put oceans between them. Ava plans to woo some artists in Europe for a while and says she’ll miss him. Nikolas asks her to promise to return. Ava only promises to love him wherever she is.

On the next General Hospital: “Mike” asks Peter if he knows his identity. Brook Lynn tells Maxie the guy is into her. And Anna assures Obrecht that she’ll find Peter dead or alive.

Get your free daily soap-opera fix for General Hospital — and all of the other daytime dramas — delivered straight to your email inbox by signing up for Soaps.com’s newsletter. And don’t miss our gallery of All My Children stars then and now. 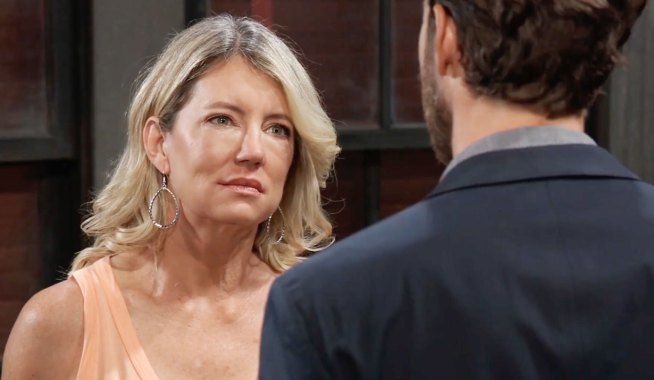 After Peter Threatens ‘Mike’ and Phyllis’ Lives, Nina Places a Call to [Spoiler] for Help 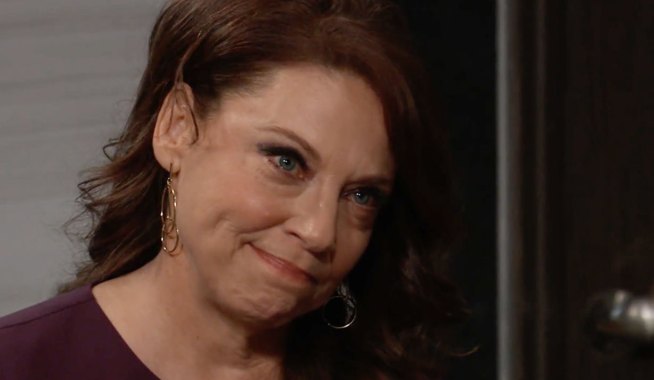