With Paranoia Driving Her Over the Edge, Maxie Decides It’s Time to Leave Port Charles 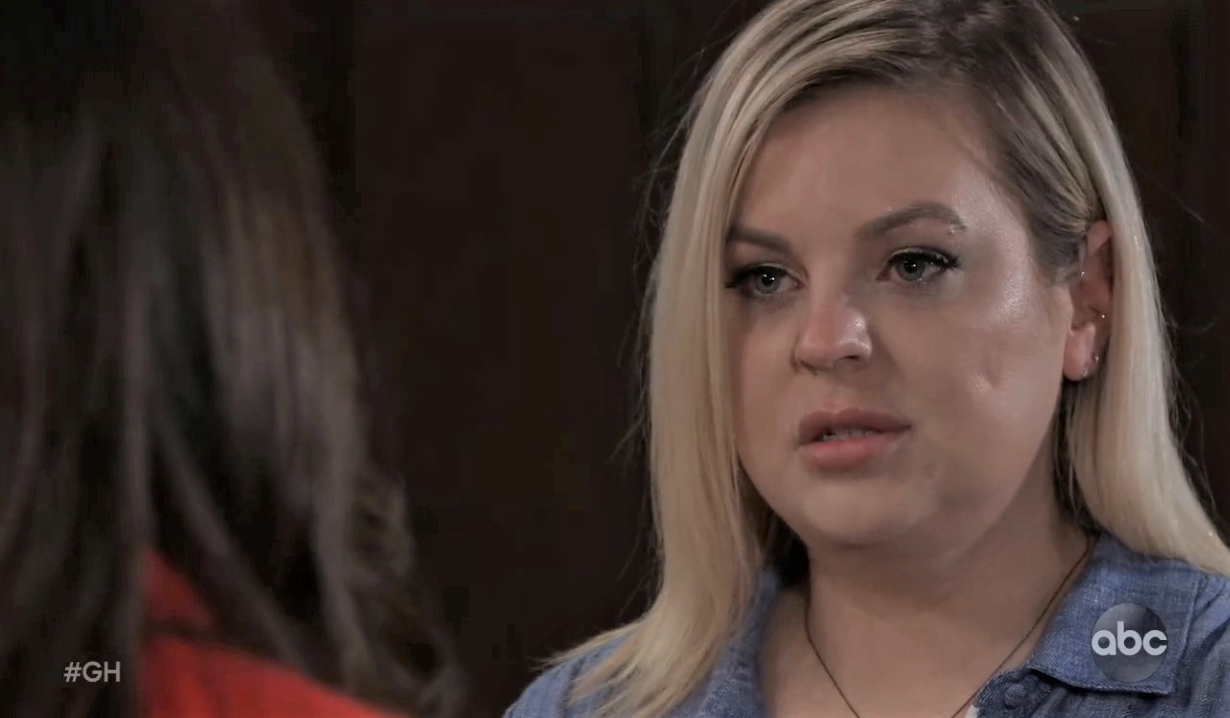 Maxie bursts into the Quartermaine estate and tells Brook Lynn that they are in huge trouble. Austin has moved to town and she’s worried he’ll figure things out. Brook Lynn thinks that she’s being paranoid and that’s her biggest problem right now. She reminds her to stop calling the baby Louise because it’s raising alarms. Maxie becomes distraught when Brook Lynn refuses to let her see the baby. The Quartermaine suggests she just come clean and take her daughter home. There’s nothing Maxie would like more but it’s impossible while Peter is out there. Her friend tells her that showing up is only making things worse. Maxie decides she needs to leave Port Charles or risk undoing everything. 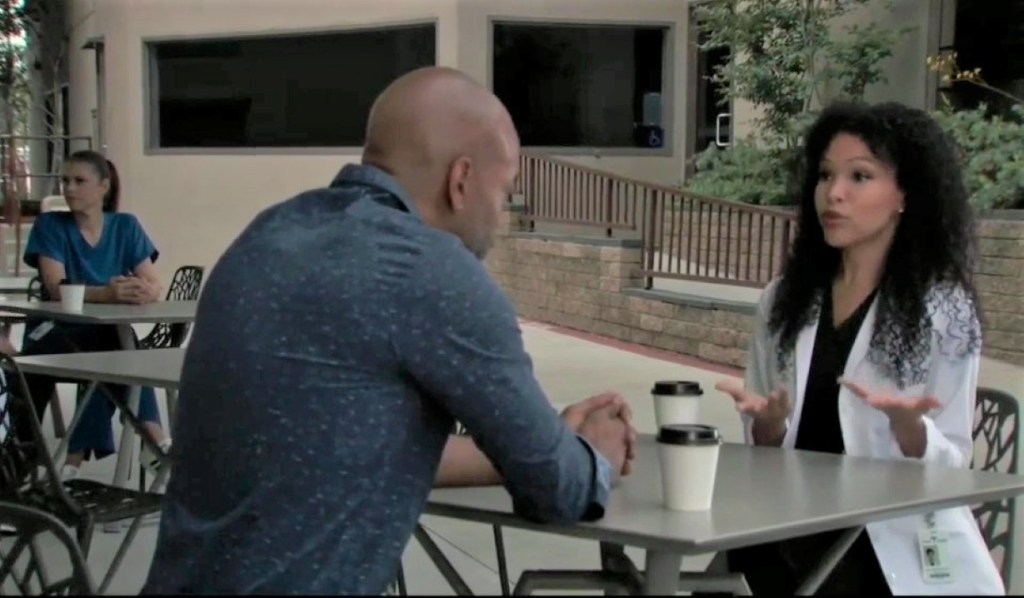 Portia and Curtis step outside of General Hospital. He wants to be sure she backed away from them for her own reasons, not because of his meddling aunt. She agrees with Stella. He’s barely divorced and she’s not interested in a rebound relationship. He thinks they owe it to themselves to explore the possibilities. The doctor feels like the risk of losing him as a friend is too high. Curtis suggests she’s afraid and settling. He doesn’t want to regret not taking a chance.

Austin meets Amy at the nurses’ station. She welcomes him aboard and he says he’s going to have the time of his life. 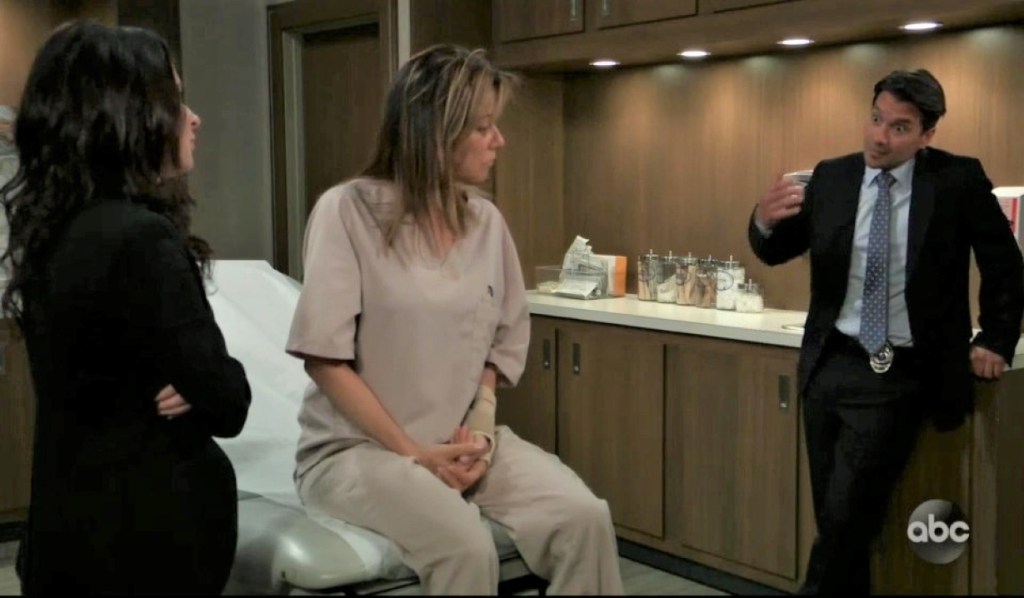 Dante drops by to see Alexis in an exam room. Sam joins them and gives her mom a hug. Austin pops in and informs them he’s on staff now. The cop and Sam are defensive with Austin, who tries to deflect and then offers to get Portia to look at Alexis. After he leaves, the cop and PI rehash what happened with Maxie for Alexis. Portia arrives so the others leave. 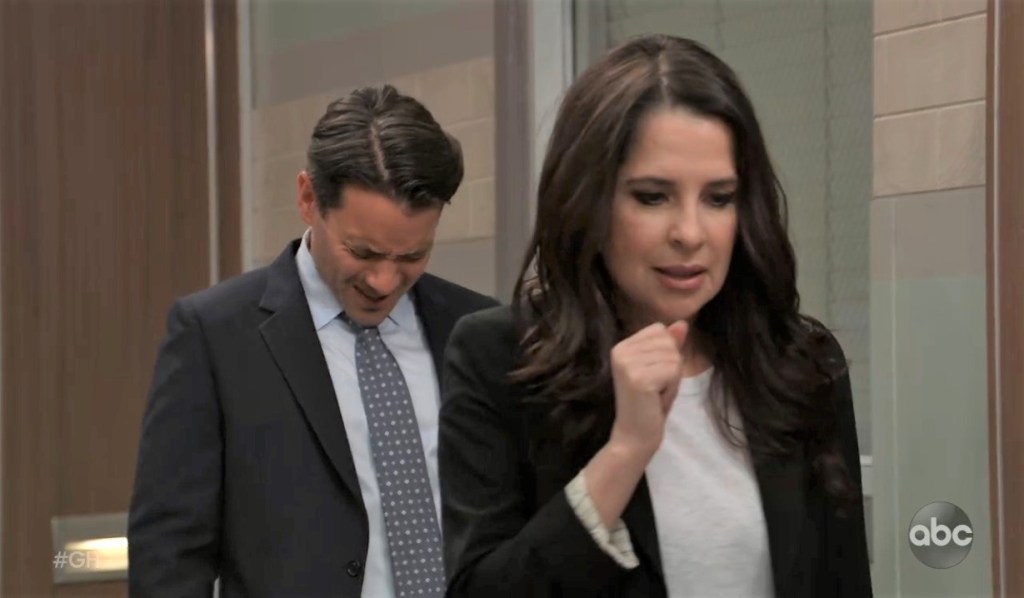 In the hall, Dante remembers his kiss with Sam. Before she can leave, he asks to discuss their kiss. Sam says she was drunk and they should forget about it. The topic turns to Pentonville. She’s worried her mom could be targeted for retaliation. He offers to look into that. 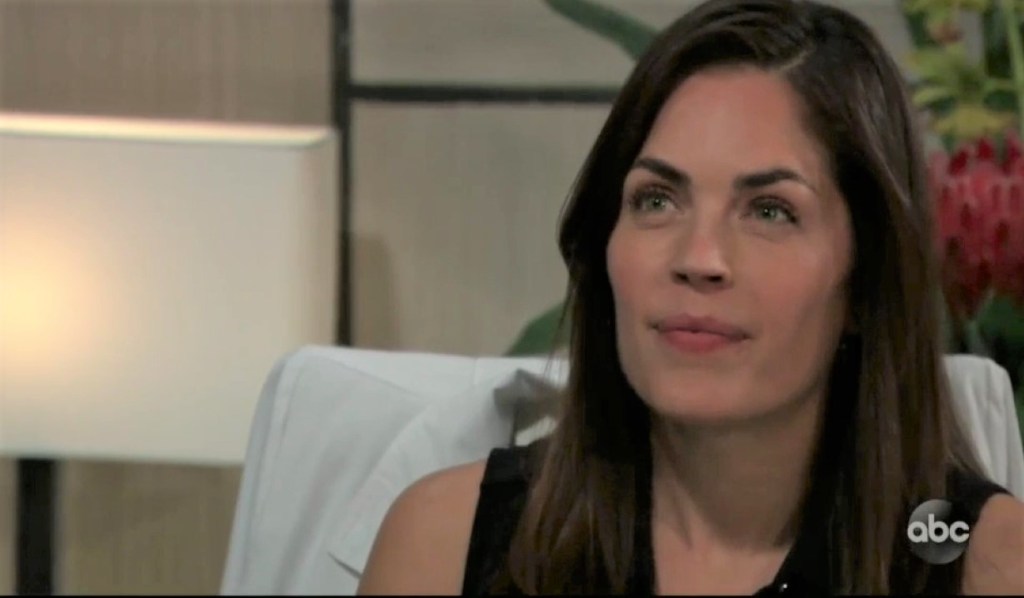 Jax stops by Britt’s office to see how she’s doing after her run-in with Carly. She thanks him for taking her mind off things the other night. They agree it doesn’t have to have been more than fun. He opens up about his worries for Carly and Joss’ safety now that she’s doubling down on the mob. Obrecht interrupts and Jax excuses himself. Liesl apologizes to her daughter for encouraging her to follow her heart only to have Jason stomp on it. She guesses that Britt slept with Jax. She’s only disappointed that Jason couldn’t see how incredible she is. Britt tells her about having the gene and assumes Jason slept with her out of pity. She’s determined not to be hurt again. Her mom is proud of her. 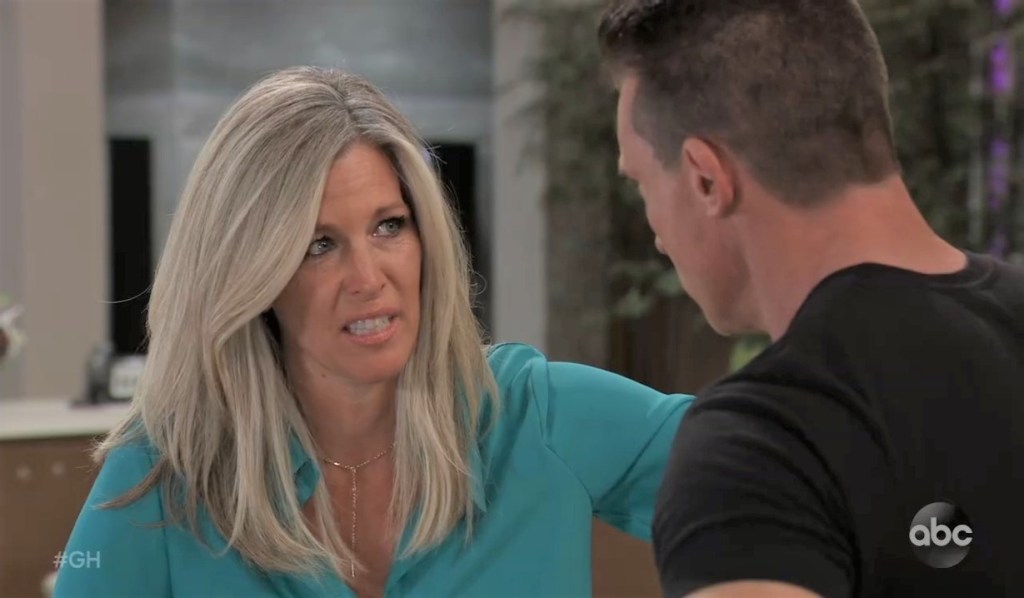 Carly explains to Jason that she just told Britt a few things she needed to hear. She insists that Britt has to start mourning the relationship she thought she could have. Jason doesn’t think she needed to do that. Carly wonders if he still wants the doctor. He asks her to leave the other woman alone. After he leaves, Austin bumps into her and asks for directions to the Corinthos section. She tells him that Lucas is her brother and the family gives a lot of money to the hospital. He muses that everyone seems related and quizzes her about Monica. She’s surprised by how much he already knows about Port Charles.

As Jason heads for the elevators, he bumps into Jax and tells him not to hurt Britt. Jax points out that he’s not the one whose been hurting her. When Jason heads down the hall, he watches as Britt sobs on Liesl’s shoulder.

More: A case for bringing back General Hospital: Night Shift 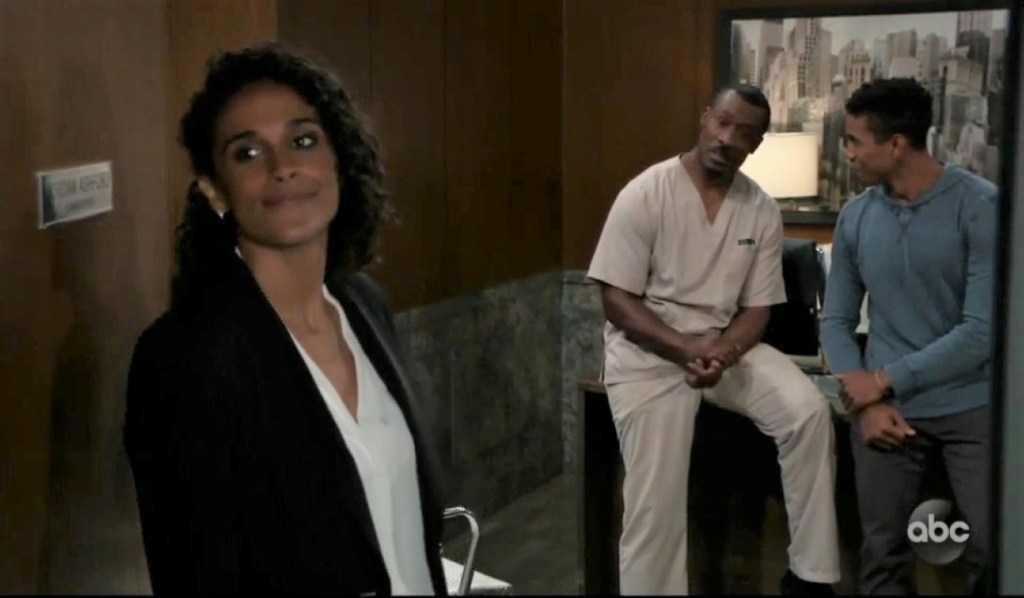 In Jordan’s office, she, TJ, and Shawn discuss the case against Judge Carson. Shawn and Alexis will be staying at the PCPD for their protection. If released, Shawn is determined to go after whoever shot Hayden. They rehash Jordan keeping the truth of TJ’s paternity a secret for years. Shawn says that he might never have gotten out of the mob if he hadn’t gone to prison. Curtis arrives, happy and surprised to see Shawn. TJ accompanies Shawn down to the cells. Jordan recaps the situation for Curtis, who apologizes for accusing her of warning Portia away. She just wants him to be happy.

In the cells, Shawn and TJ talk about his case. TJ tells him he will do whatever it takes to bring him home.

On the next General Hospital: Scott has a big announcement.

Get your free daily soap-opera fix for General Hospital — and all of the other daytime dramas — delivered straight to your email inbox by signing up for Soaps.com’s newsletter. And don’t miss our gallery of the worst soap opera exits. 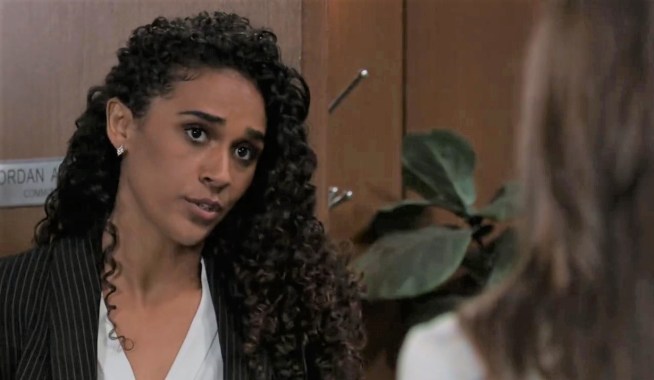 Austin Crashes the ELQ Vote to Reveal He is Jimmy Lee Holt's Son — Plus, Spencer Returns to Wyndemere Shocking Laura and Nikolas 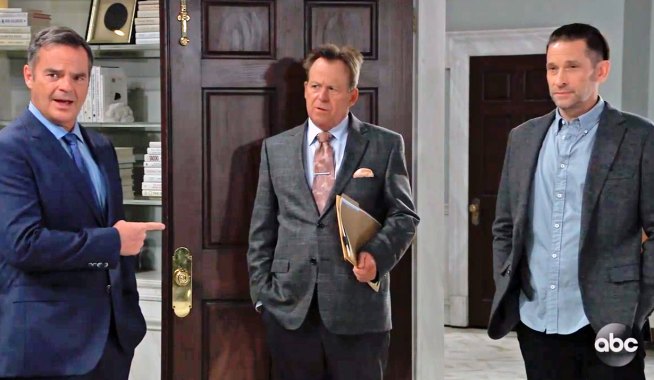