Tuesday, June 21, 2021: Today on General Hospital, Gregory tells Chase the truth about how Finn was able to save him, Anna and Valentin plan a trip, and Liz tells Jason about Peter in her own way. 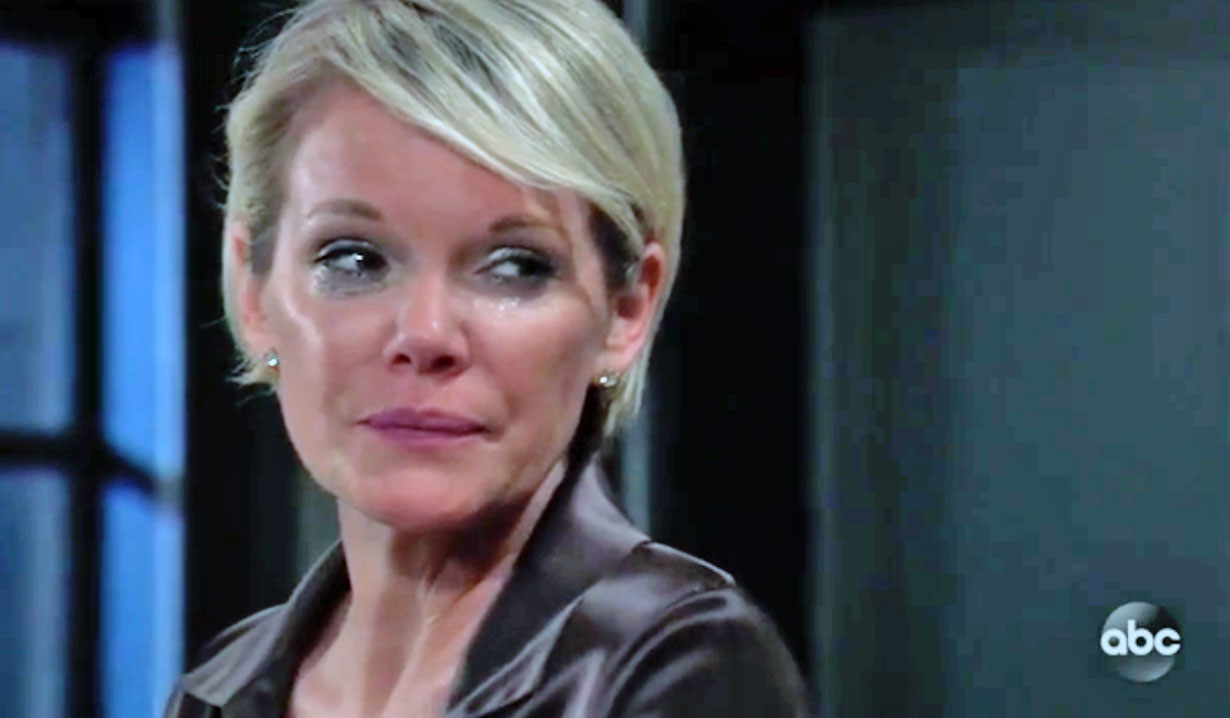 Jordan arrives at the hospital and learns from Anna that Finn was able to save Chase. She is relieved and decides to call Dante and give him the good news. Jordan also fills Anna in on Dante locating Peter’s accomplice who kidnapped Maxie, though unfortunately, she was dead when Dante found her. Portia walks by, and Jordan and Anna ask her about Chase and Finn. Portia says Chase is doing better, but oddly Finn looks like he’s still suffered a loss. Anna is glad Chase will be okay but knows that as long as Peter is out there, this isn’t over. Anna departs.

Jordan and Portia sit down to talk about Trina and how she’s coping. Portia says she’s focused on all things PCU right now. Jordan is also concerned about how Portia is handling living through the hostage situation and offers to listen if she ever needs to talk. They both agree it would be nice to have each other as a friend. 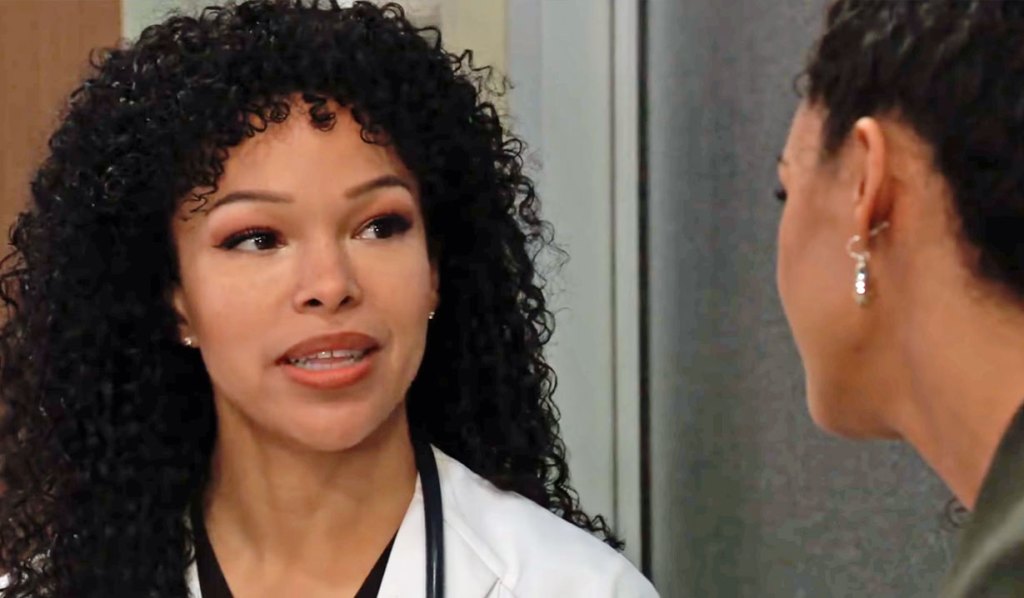 In Chase’s room, Chase asks Finn how he managed to save him. Finn feels there is plenty of time for explanations later, but Chase just wants a simple version. Finn says it came down to DNA, which Chase doesn’t understand. Finn tells him to just rest, and he’ll explain it all later. Chase keeps pushing, so Finn suggests Gregory can explain better than he can. Finn departs, and Gregory tells Chase the truth about Cyrus messing with the DNA test and that he is and always has been his father. 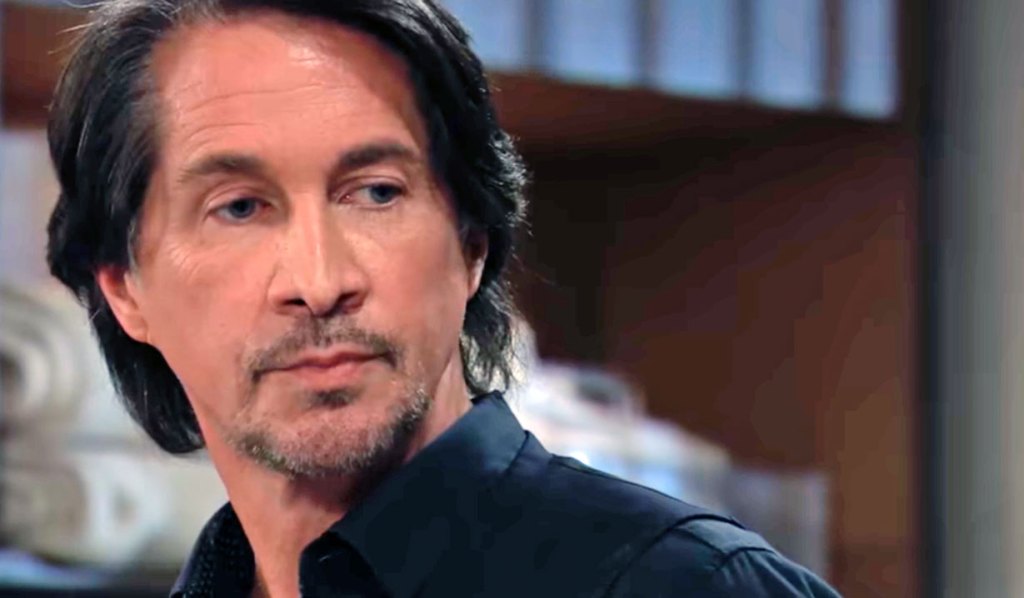 In the hall, Liz tells Jason not to waste his time looking for Peter. Jason wonders why not. She says she can’t go into details but indicates Peter won’t be an issue. Jason asks her what she did. She asks him to trust her and not to ask questions but swears Peter is gone for good. Jason promises her whatever she needs, he’ll be there to help her. Finn interrupts and asks what Jason is offering help with. Liz makes excuses, and Jason departs. 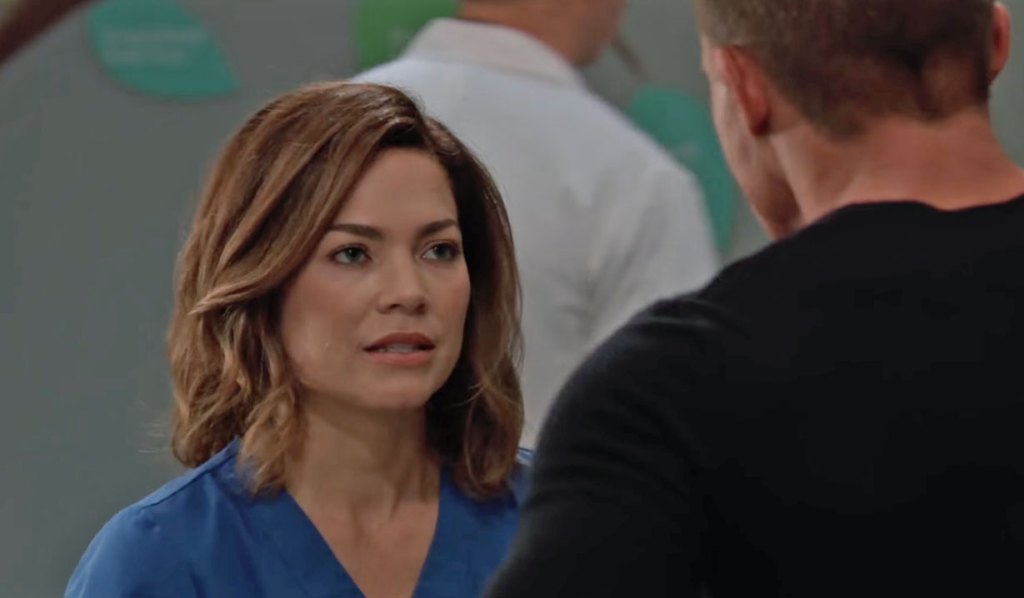 At the Quartermaine mansion, Maxie holds her daughter and promises her that one day they’ll be together again. Brook Lynn and Valentin enter, and Brook Lynn asks her what she’s doing there. Maxie says she stopped by to bring a present for Louise. Valentin appears concerned, and Maxie quickly says she meant Bailey. Brook Lynn says it’s time for Bailey to go down for her nap, so she takes her from Maxie and puts her in her bassinette. Brook Lynn suggests they get some fresh air and drags Maxie out to the terrace. 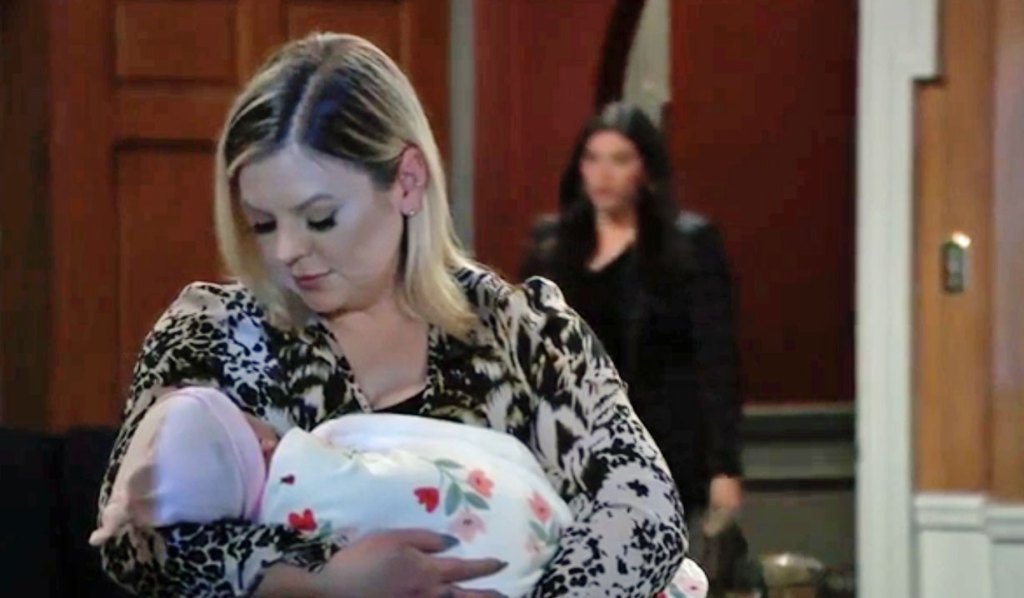 Valentin tells the baby how blessed he feels to have her, and how he feels responsible for Maxie not having her baby. Anna arrives and overhears him promising to be the best father he can to Bailey. Anna speaks with Valentin and learns that Maxie came by and is missing her baby. The spy reveals she’s going to find Peter and fills Valentin in on the discovery of the dead nurse that Peter was working with. She vows to continue following this lead, and Valentin offers to help because he feels he owes it to Maxie to reunite her with her daughter. 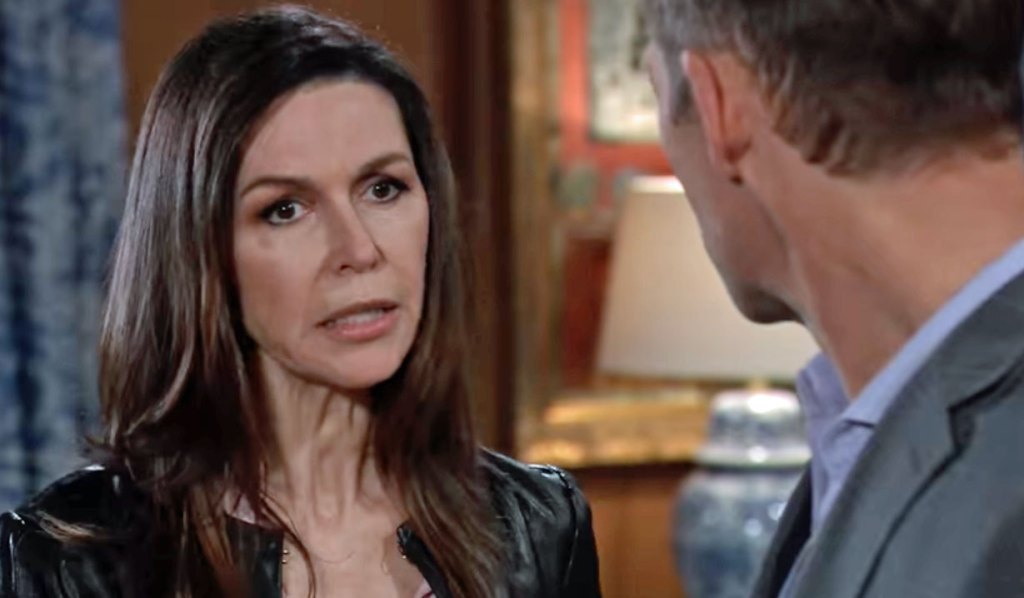 On the patio, Brook Lynn scolds Maxie for almost blowing up their plan. Brook Lynn reminds her that if Peter is having her followed then he will figure out the truth. Maxie knows she’s right and will have to be stronger to protect her child, even if it means giving her up. Brook Lynn thinks maybe there’s a way Maxie can be with Louise, but she’ll have to work out the details. 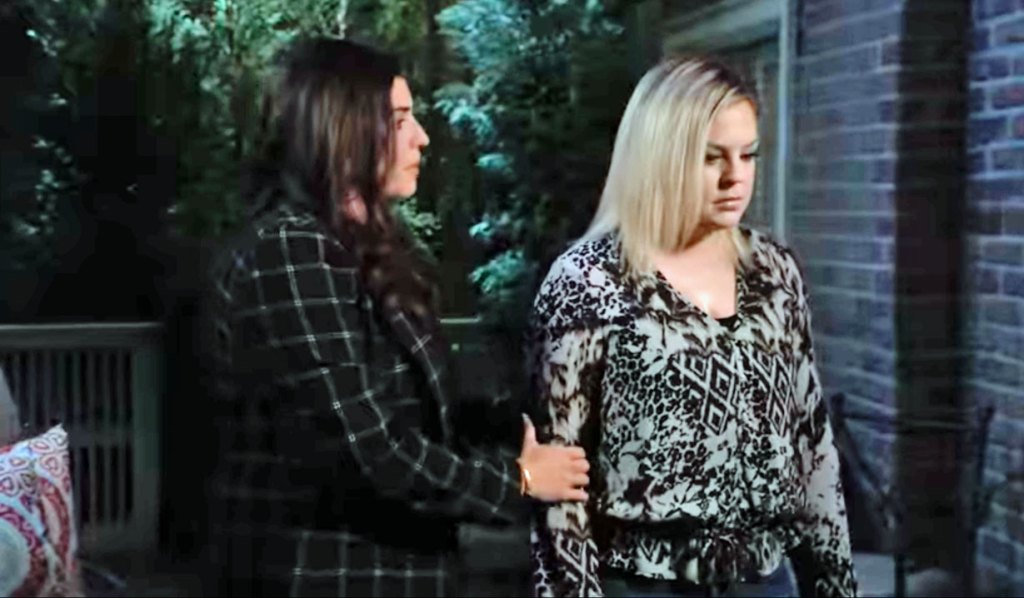 Brook Lynn and Maxie go back inside, where Valentin and Anna reveal they are going to Pautuck because they may have a lead on Peter.

More: When could we see Cyrus again?

Taggert finds Curtis at The Savoy where he’s making plans for Trina’s big graduation party. Taggert thanks Curtis again for his help saving Portia and Trina. Curtis pours them some scotch and they toast to Cyrus being sent away and the case against Taggert being dropped. Their discussion turns to how Portia is doing, and Taggert thinks that is something Curtis should ask her himself. 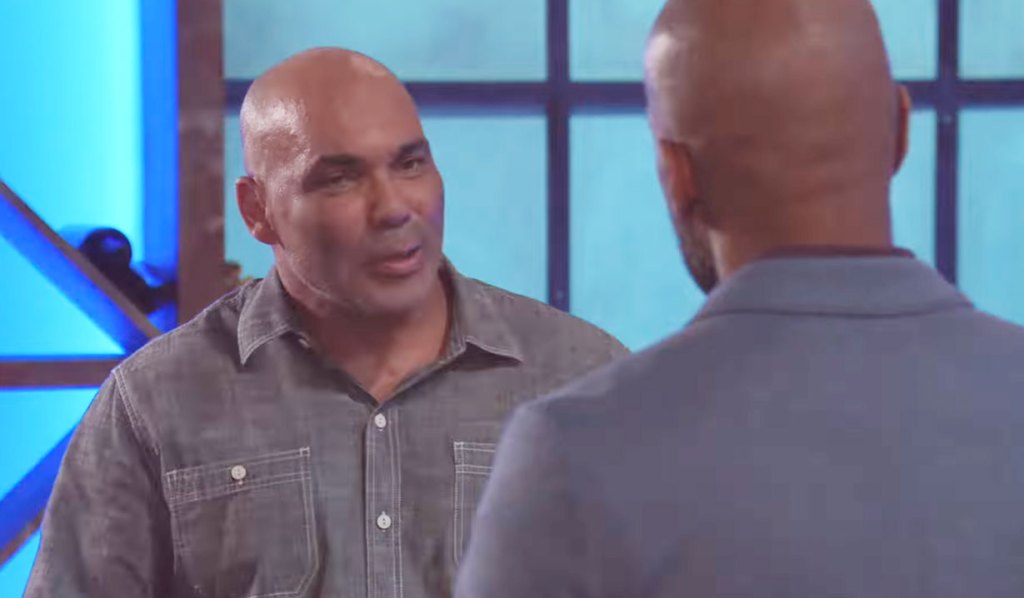 Curtis and Taggert are interrupted when Jason arrives to speak to Curtis. Taggert departs, and Jason thanks Curtis for his help in putting Cyrus away. Jason offers Curtis any help he needs in starting this business. Curtis asks if Jason knows something that he doesn’t? Jason just wanted to extend his friendship if he needs it, and if his business is ever threatened then he knows where to find him. 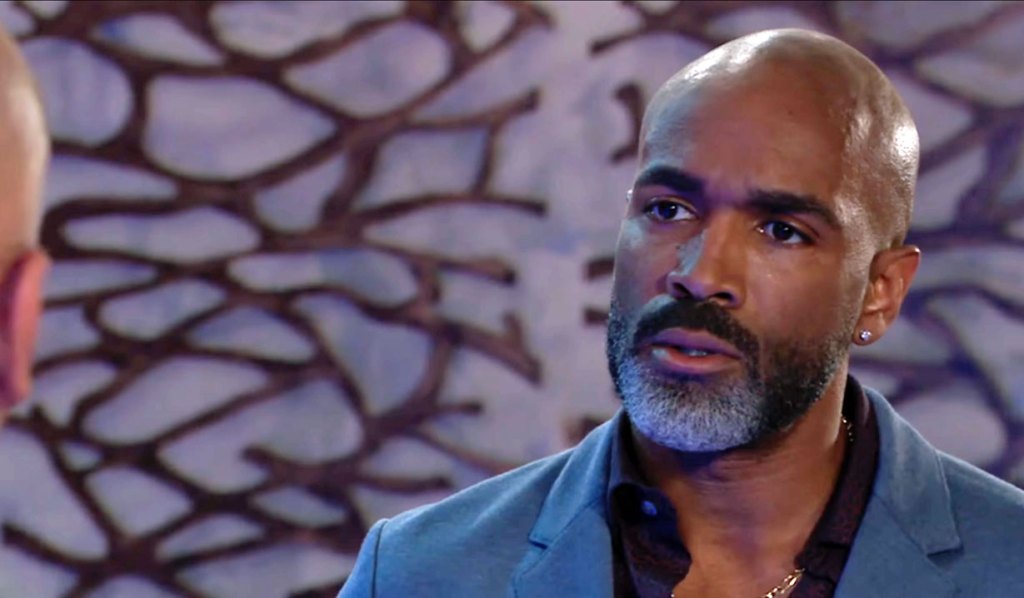 In their room at the Metro Court, in tears, Ava tells Nikolas that she can’t do this anymore. Ava can’t live with the possibility that next time this stalker may do something to harm Avery. Nikolas vows to do whatever it takes to protect them and insists that giving in to the stalker won’t make Avery any safer. She reminds him that she lost Kiki to this same madness, and she can’t go through it again. Nothing is worth risking Avery’s life, even loving him. 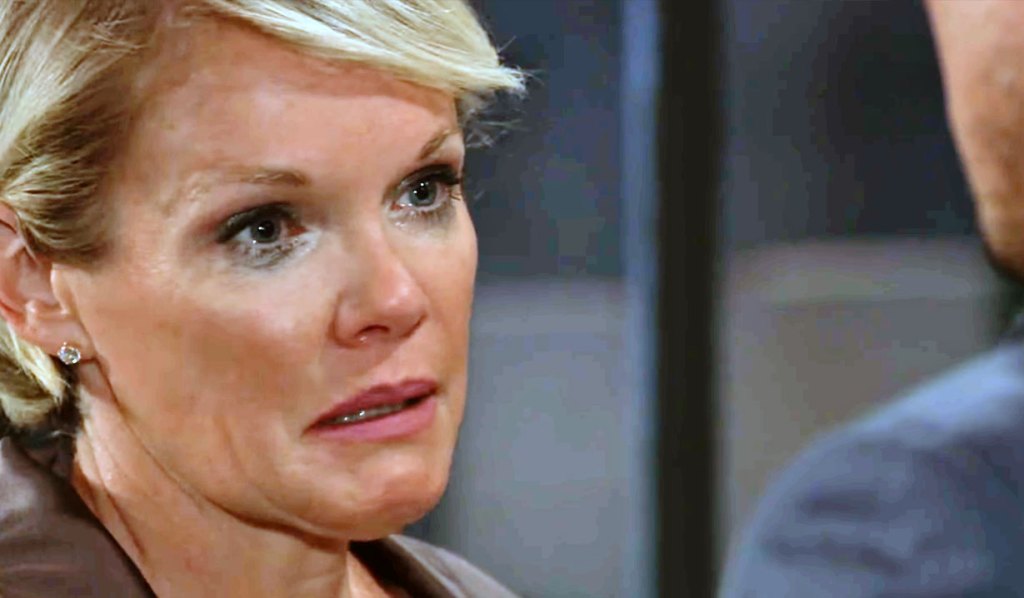 Ava begs Nikolas to go home to his house and island and not come back. Nikolas won’t give up on them, so she warns him not to make himself someone that she needs to fight. Ava says nothing means more to her than Avery and she begs him to leave while she still loves him. She swears that if he stays, she will do whatever it takes to be free of him. Nikolas grabs his bag and departs. He promises this isn’t forever because he will never give up on them. 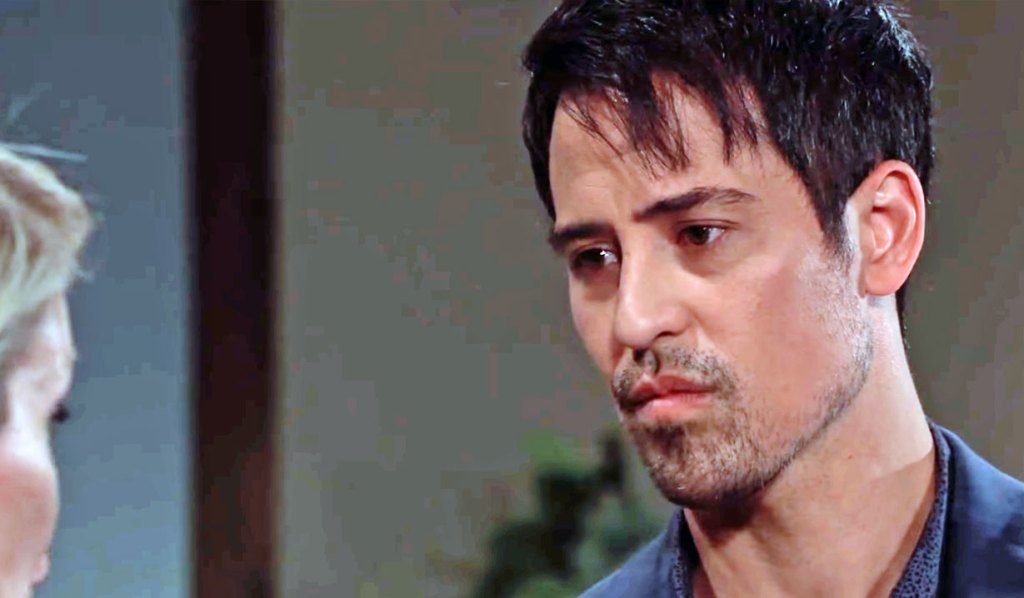 Back at the hospital, Taggert finds Portia and Jordan talking and laughing and assumes they are talking about him. They tell him, “You wish!” Portia assures her ex that they have more to talk about than him. Taggert asks her out to dinner to discuss Trina’s party. Portia agrees to go out with him and extends an invite to the party to Jordan. Alone, Jordan gets a message from Stella asking how things are between her and Curtis.

In his room, Finn checks over Chase and says his vitals are looking good. Chase thanks his big brother for saving him, and tells him that he’ll always look up to him. Out in the hall, Gregory calls Jackie, who says Violet can’t wait to see her uncle. Finn approaches Gregory, who knows this has been hard on Finn because he knows what Chase means to them both. He embraces his son. 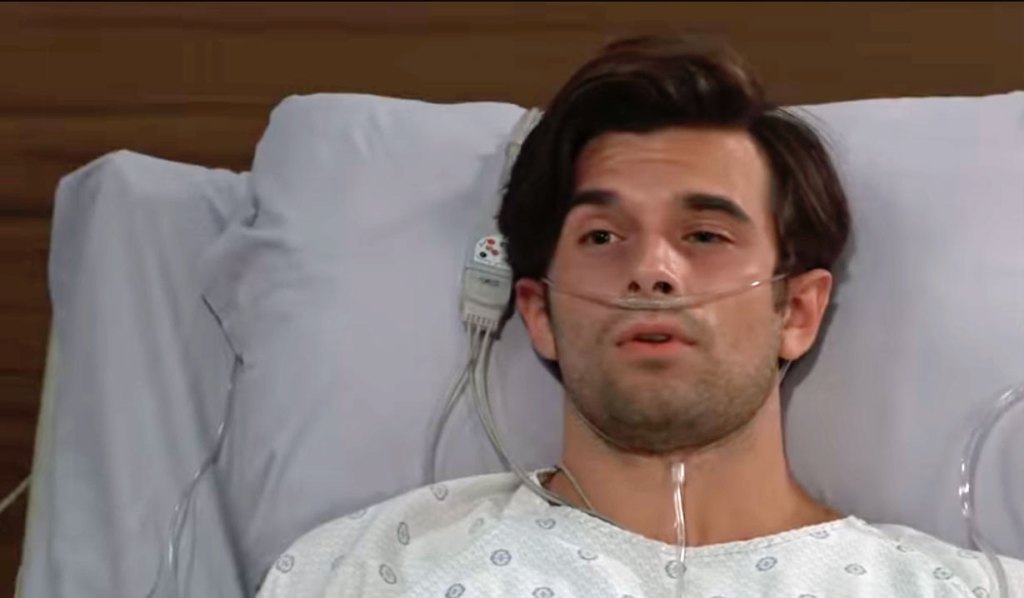 On the next General Hospital: Liz approaches Carly to talk, Alexis continues to help Shawn in prison, and Brook Lynn advises Michael and Willow about their lie.

Get your free daily soap-opera fix for General Hospital — and all of the other daytime dramas — delivered straight to your email inbox by signing up for Soaps.com’s newsletter. And don’t miss our gallery of gifts for Hallmark lovers.

<p>What’s better than relaxing in front of the television with a cup of steaming coffee while enjoying a steamy new romance movie? Basically nothing.  That’s what makes this gift perfect for the <a href="https://www.amazon.com/antkondnm-Coffee-Hallmark-Movies-Kinda/dp/B085ZLMMRB?tag=soaps0f6-20" target="_blank">coffee-loving Hallmark fan</a>.</p> <a href="https://www.amazon.com/antkondnm-Coffee-Hallmark-Movies-Kinda/dp/B085ZLMMRB?tag=soaps0f6-20"></a>

<p>Hallmark lovers <em>really</em> like Hallmark holiday content, and <a href="https://www.amazon.com/Hallmark-Channel-Countdown-Christmas-Holiday/dp/1950785246/?tag=soaps0f6-20" target="_blank">this book</a> is a sort of bible for holiday-themed Hallmark movies. It takes a personal look at the stars of these series, and shares their own holiday recipes, tips for decorating and gift giving, plus a bit of seasonal inspiration.</p> <p> <a class="pmc-buy-now-button" rel="nofollow" href="https://www.amazon.com/Hallmark-Channel-Countdown-Christmas-Holiday/dp/1950785246/?tag=soaps0f6-20" custom-ga-data="{"category":"article-page","details":"Hallmark Channel Countdown to Christmas","label":"buy-now","url":true,"product":{"dimension1":"%=href=%","name":"Hallmark Channel Countdown to Christmas","price":"22.99"},"id":600289,"location":true}" custom-ga-track="click" target="_blank"> Hallmark Channel Countdown to Christmas $22.99 </a> </p>

<p>In the last year, many people have spent a great deal more time at home, and that led to a whole new group of Hallmark movie fans. Now that we’re beginning to venture back into the world, it’s fair to assume that fandom is here to stay. Why not stay safe, and celebrate what helped to get them through this year with a <a href="https://www.amazon.com/Season-Hallmark-Christmas-Washable-Reusable/dp/B08LW5XT6S/?tag=soaps0f6-20" target="_blank">Hallmark cotton cloth face mask</a>? It has three layers and pocket filters that amplify protection from germs. </p> <a href="https://www.amazon.com/Season-Hallmark-Christmas-Washable-Reusable/dp/B08LW5XT6S/?tag=soaps0f6-20"></a>

Finn Flies Into Action as Chase...

Just as Willow Prepares to Tell...