Elijah Catches [Spoiler] Breaking Into His Office and Stealing His Files

Friday, May 14, 2021: Today on General Hospital, Valentin makes a surprising suggestion, Carly gets unexpected support, and Gladys gets the wrong idea. 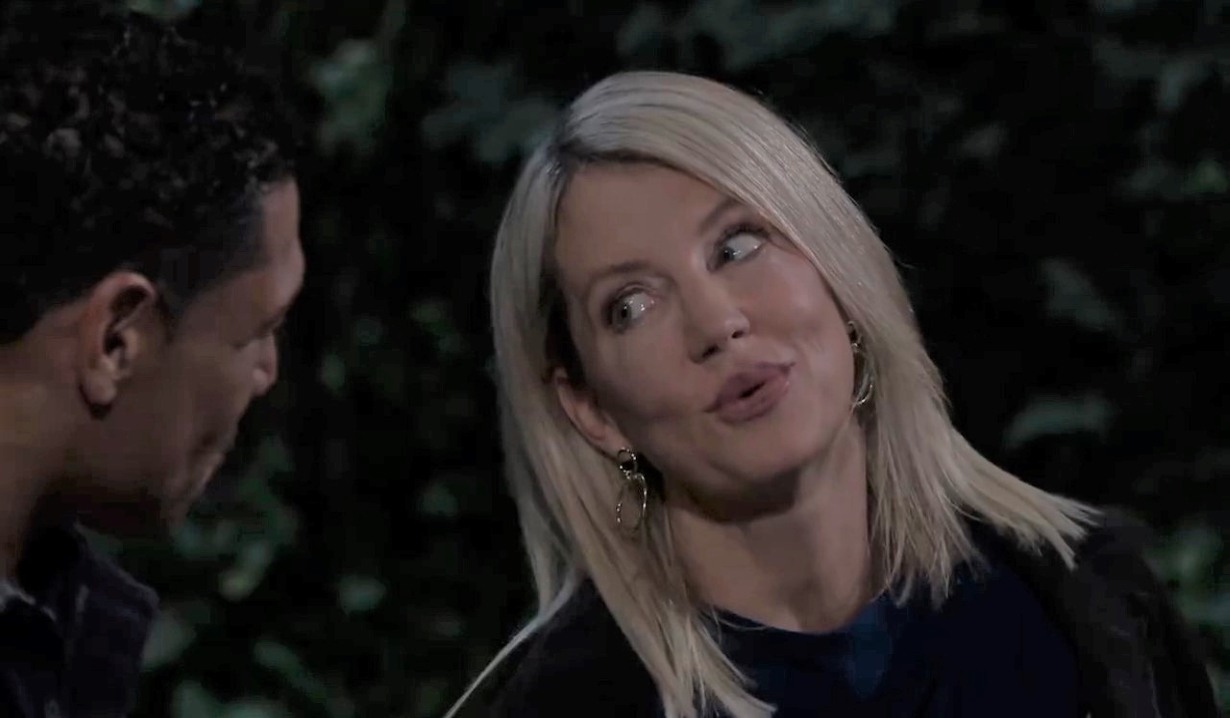 “Mike” sneaks into Elijah’s office. The alarm instantly goes off, but he continues trashing the place before installing software on the computer. The police pull up.

Elijah and Nina are in the park. He’s about to kiss her when he gets a message from his security company. She insists on going with him.

Elijah and Nina arrive at his office with the cops. He wonders if this is just a robbery or if someone is sending him a message. After he leaves for the station to make a statement, Nina sneaks back in and gets on his computer. 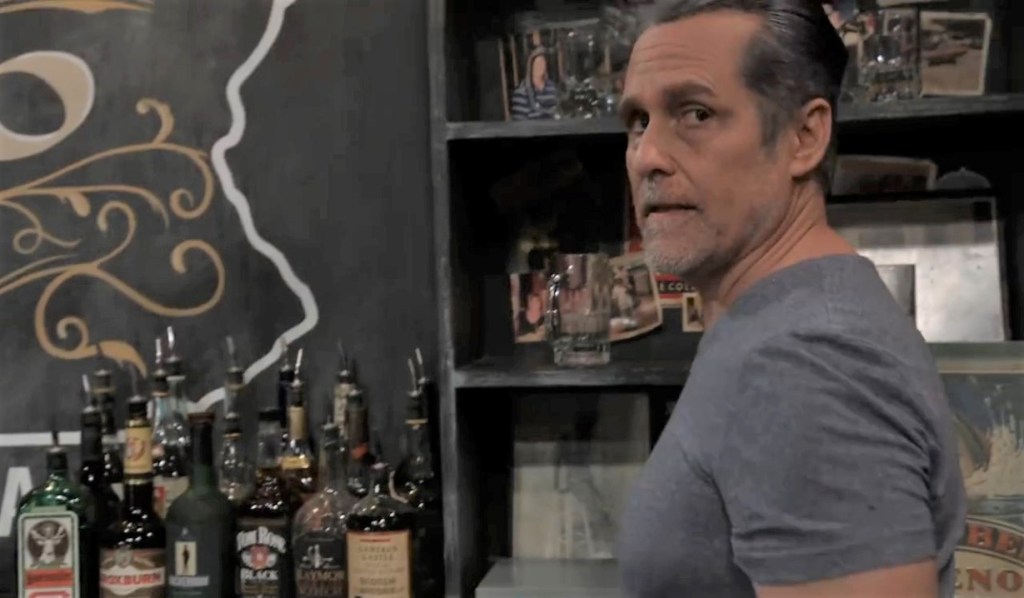 “Mike” goes to the Tan-O and sticks the cash he stole from Elijah’s office in the strongbox. Phyllis catches him and assumes he’s giving up his money to them. She thinks he should be saving it and wonders why he’s not out with Nina instead of Elijah. After she leaves to see Lenny, Nina calls to say she’s hacked in and is printing documents. He urges her to get out and can hear Elijah interrupt. 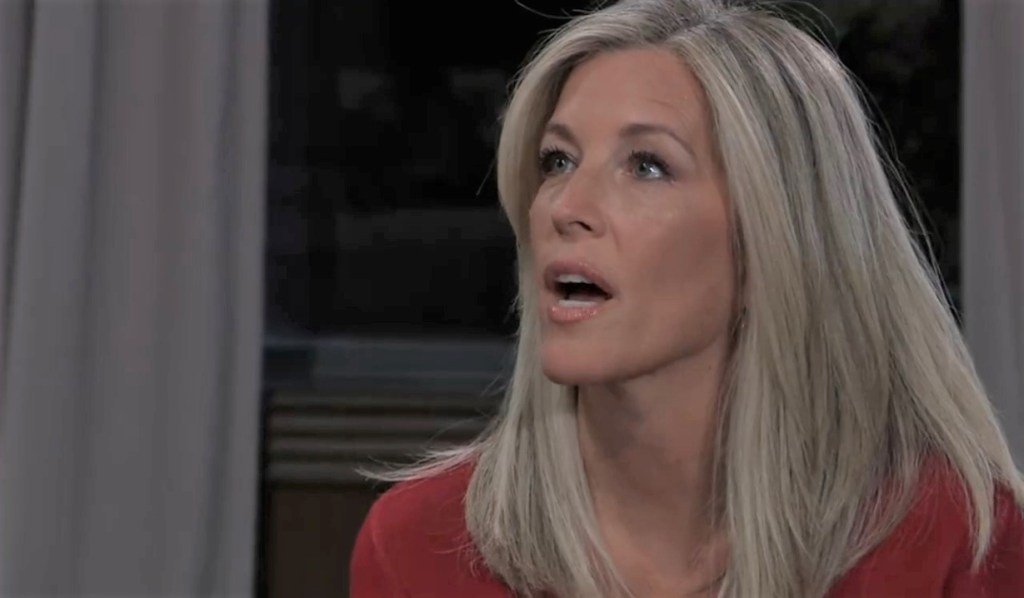 Diane drops by the Corinthos compound and complains to Carly about Jason resorting to a criminal escape instead of letting her fight groundless charges. Carly wants her will revised. She gets a call and goes to the door. It’s Ava with Avery. The little girl wants a sleepover with her sisters. Diane and Avery run upstairs to see Donna. Ava accuses Carly of using her to distract Cyrus while Jason escaped. Seeing how she’s taken over the organization has made her appreciate her more. If there’s anything she can do to help her take down Cyrus, she just needs to ask. After Ava departs, Diane returns and asks Carly not to drastically change her life because of what it could do to her children. 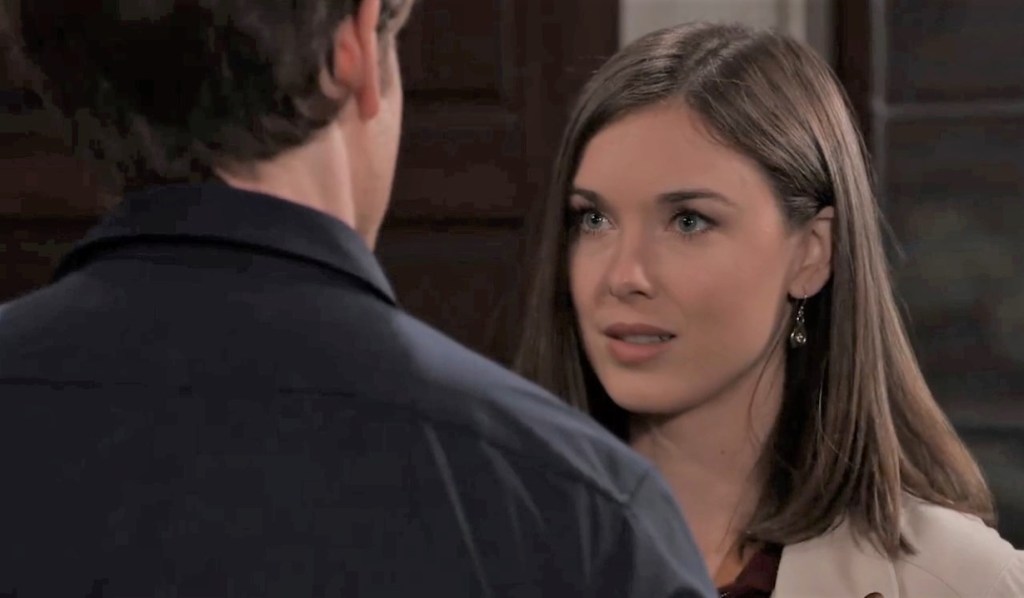 Willow drops by the Quartermaine house to say goodnight to Wiley. Michael tells her he’s already asleep. They catch up on Chase’s condition. Ned shows up and tells them he’s had a bit of a breakthrough with Olivia. 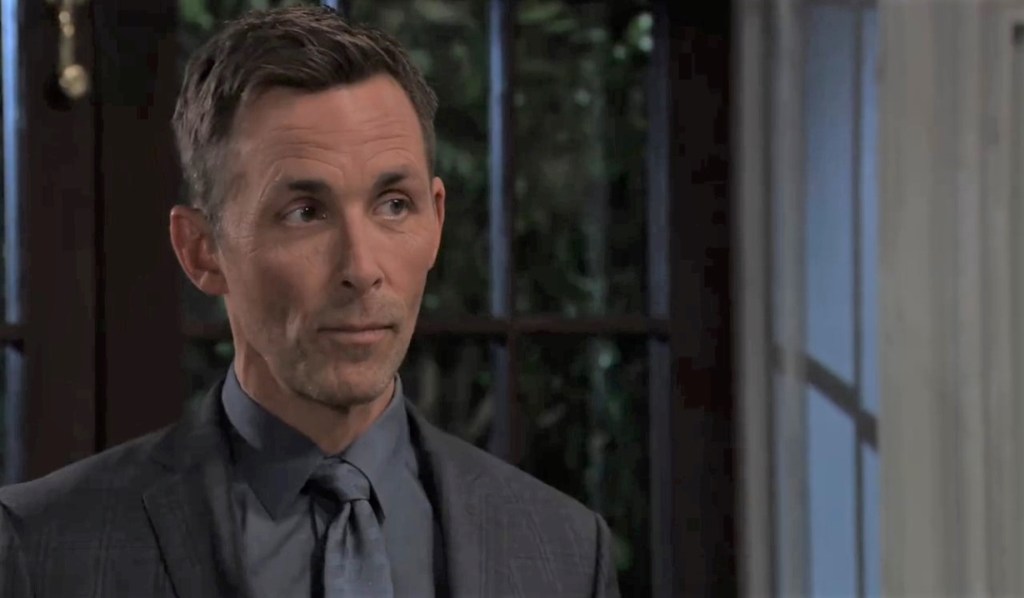 Brook Lynn watches a birthing video and is appalled. Maxie calls and asks her to meet at General Hospital. Before she can exit, Valentin arrives and they bicker about him keeping an eye on her. She has total faith he will do all he can to protect the baby. Ned and the others interrupt and she takes off. Valentin soon notices she hasn’t just slipped off to the bathroom.

In the Metro Court bathroom, Sasha calls the doctor’s office to get a prescription for her nausea from morning sickness. As soon as she walks out, Gladys steps out of a stall.

Lucy apologizes to Brando in the dining room. She never thanked him for saving Sasha’s life. Gladys joins them and asks for details about this. Lucy stutters through what happened the night Sasha overdosed. 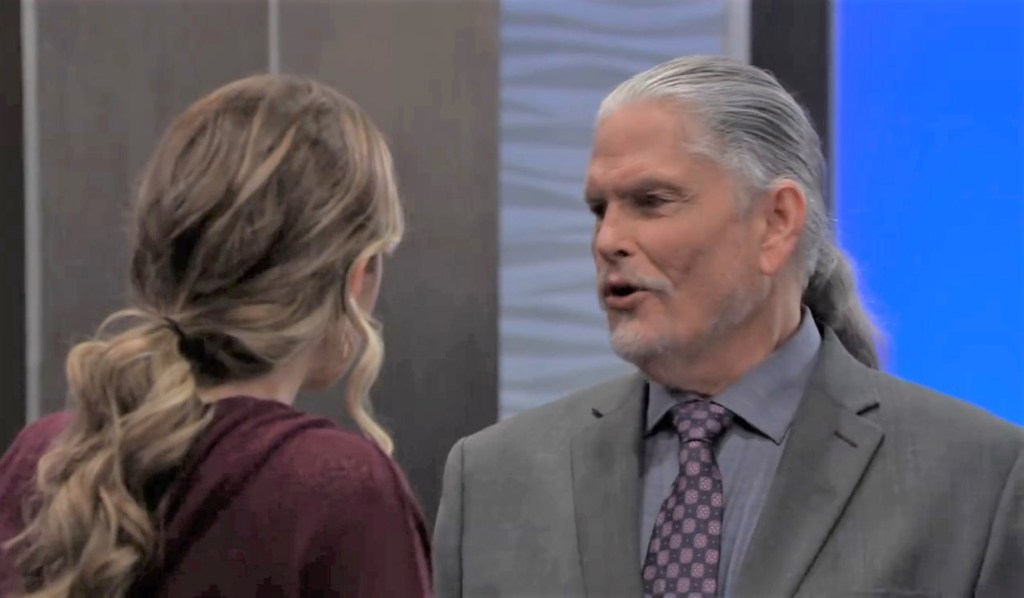 Across the room, Sasha sits by the bar and Cyrus rears his head. She’s not happy to see him and tries to escape. Gladys glares over at them and wonders to Lucy about what a Cyrus and Sasha baby would be like. As Sasha heads for the door, Lucy rushes over to her and guesses Cyrus is the baby’s father. Sasha looks cockeyed. When she’s left alone, Brando comes over and asks if something went wrong since their night in the garage.

Meanwhile, Gladys saddles up to Cyrus and tells him that congratulations are in order.

More: It’s too late for a Jason and Sam reunion 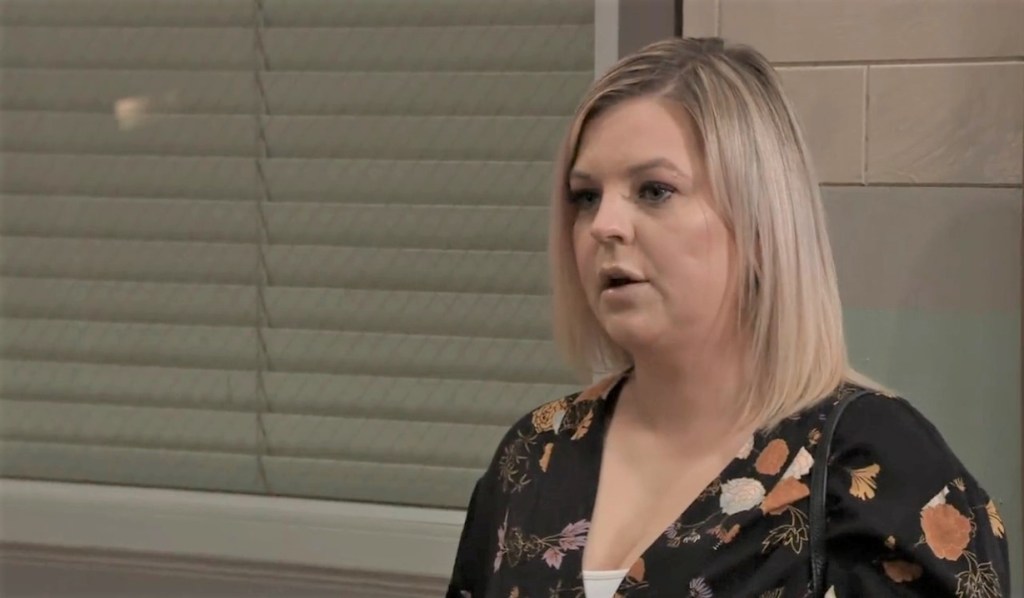 Peter approaches Maxie at General Hospital and she immediately calls Chloe over. Peter tells the nurse he’s counting on her to do whatever is necessary. Maxie tells him she doesn’t need him to stick around. Brook Lynn pops off the elevator, spots Peter, and hides. Deanna calls Maxie into the exam room. As soon as Maxie is left alone, Brook Lynn sneaks in and is handed the keys to the house in Beechers Corners. They plot out how the birth will work. After Brook Lynn leaves, Dr. Navarro comes in and gives Maxie her exam. When Peter joins them, Navarro suggests that they induce the birth right now.

Brook Lynn returns to the Quartermaine house and Valentin announces that he, his bodyguard, and Charlotte will be moving in to help her out.

Ned asks Michael to let Olivia know how important today was for him. After he leaves, Michael tells Willow how grateful he was to have her there.

On the next General Hospital: Anna looks to an old friend for help.

Get your free daily soap-opera fix for General Hospital — and all of the other daytime dramas — delivered straight to your email inbox by signing up for Soaps.com’s newsletter. And don’t miss our gallery of Anna over the years.

<p>Finola Hughes created the role of Anna Devane in 1985. In 1991 actress Carmilla Moore filled in as a temporary replacement. This was one of Hughes’ official headshots.</p>

<p>Luke and Anna working together while she was with the Port Charles Police Department. This was during their brief romance.</p>

<p>Luke and Anna are in fancy dress for a masquerade. Anna is dressed as a flapper.</p>

<p>Felicia joins Anna to offer her support at the court house. It looks as though upsetting news was delivered.</p>

<p>Faison and his goons attack Anna. This wouldn’t be the first time he went after her.</p>

<p>Anna in a dramatic moment. This is from Finola Hughes’ Daytime Emmy reel for 2017.</p>

<p>Nina confronts Anna at her home. They argue about Valentin’s feelings.</p>

<p>Anna enjoys a cup of coffee at home. She and Finn discuss a case.</p>

<p>At the Metro Court, Finn confronts Anna and Peter with what he knows. Anna continues to defend Peter from the doctor’s suspicions.</p>

<p>Dominic Zamprogna, Finola Hughes, William deVry together for the Disney/ABC Television Group. This was part of a 2014 Winter Press Tour Party.</p> 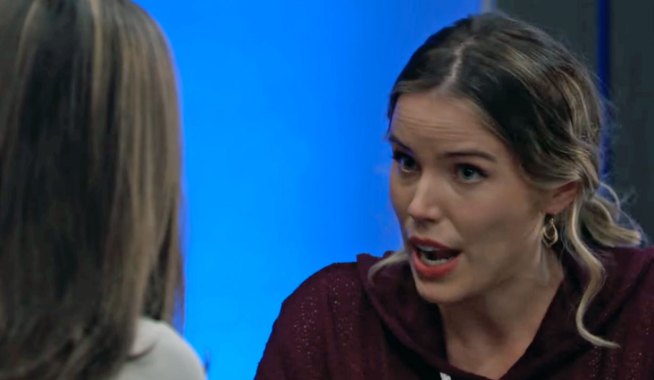 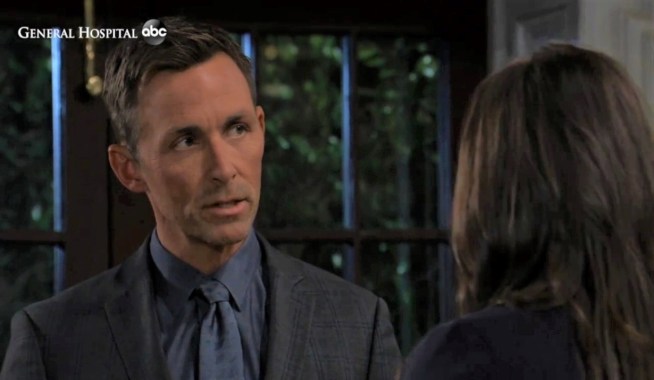