Thursday, May 13, 2021: Today on General Hospital, Sasha's secret doesn't stay one for long, Nina and "Mike" put a plan into action, and Jason makes a decision about his future. 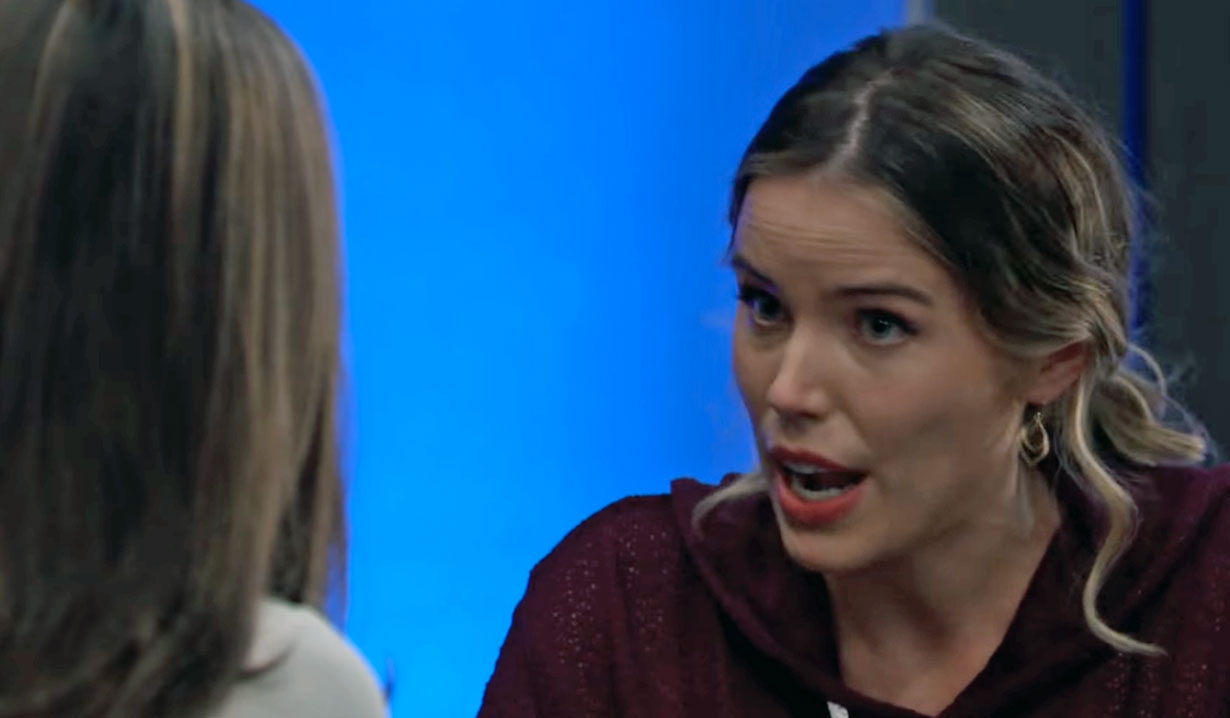 Lucy meets with Sasha at the Metro Court. Lucy notes that Sasha looks awful and asks if she is using again. Sasha isn’t and reveals she’s pregnant. Lucy is the first to know because Sasha felt she owed her this for keeping her on at Deception, and she wanted to give her an out. Lucy wonders who the dad is and begins going down a list of potential baby daddies. Brando enters and asks Sasha if she’s feeling any better. She tells him that she’s feeling much better. Gladys arrives, and she and Brando grab a table. 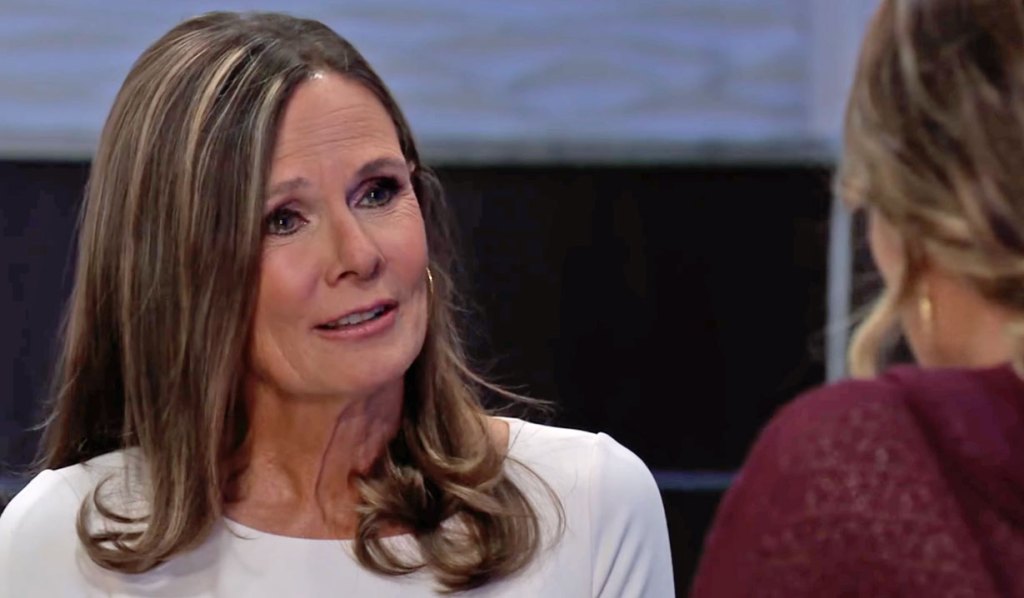 Lucy continues to press who the dad is. Sasha isn’t ready for the dad to know and asks Lucy how they handle her pregnancy. Lucy decides to highlight her pregnancy in a new campaign called the face of conception. Sasha tells her she can’t announce this until she figures out what to do about the father. Lucy suggests she eat up for the baby, but the smell of Lucy’s fish makes her sick and she ends up rushing to the restroom.

At their table, Gladys tells Brando that Sasha looks terrible and might be back on the hard stuff. Brando doubts that, and he asked her to lunch to talk about her and Cyrus, not Sasha. Brando tells his mother that Cyrus is blackmailing him thanks to her, and soon he’ll stop pretending to be her friend when he has no more use for her. She refuses to be browbeaten by her son and storms off. 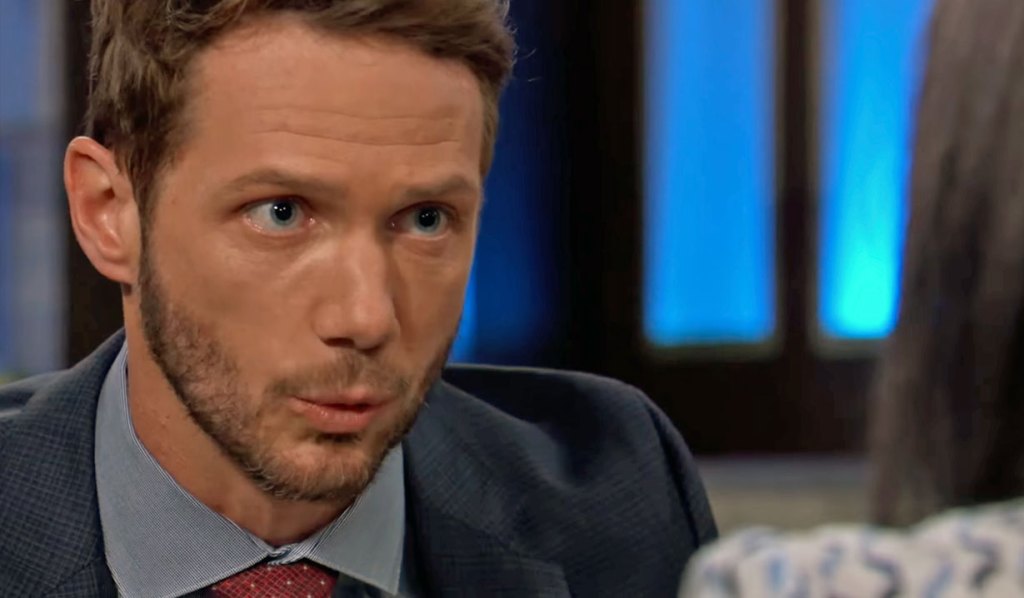 In the restroom, Sasha calls her doctor for some medicine for her morning sickness. After she leaves, Gladys exits a nearby stall.

In Pentonville, Nikolas interrupts Shawn and Alexis discussing the crime he didn’t commit. Alexis asks Shawn if he knows who shot Hayden, but he doesn’t. Shawn excuses himself, and Alexis asks how Nikolas was able to stroll in there, and if it has to do with Cyrus. Nikolas’s relationship with Cyrus has changed and he worried he wouldn’t hold up his deal to protect her. Therefore, he’s about to become the new owner of Pentonville. Alexis thinks this solution is at least preferable to him being in bed with Cyrus. 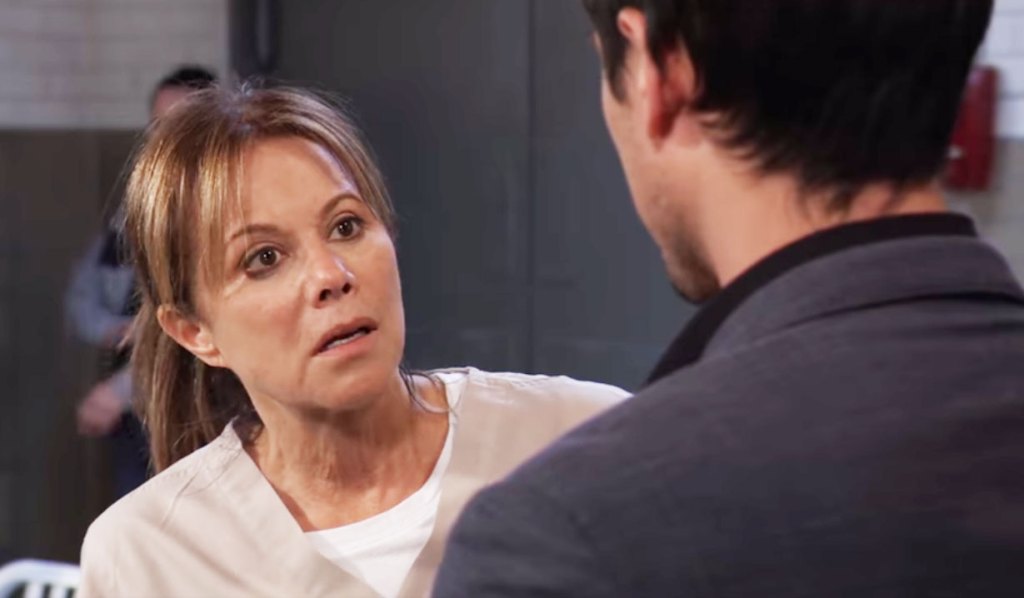 Nikolas departs to see the warden, and Alexis returns to talking to Shawn. She won’t give up until she convinces him to fight for his exoneration and clear his name. He eventually agrees. Nikolas returns, and Alexis tells him the good news about Shawn. Shawn hopes to also do right by Hayden and find out who really shot her.

In Nixon Falls, Nina reveals her dress for her date with Elijah to “Mike.” They discuss the plan, and “Mike” assures her that he knows how to use the listening device and break into a place. Nina knows he does. He questions why she always looks at him like she knows him better than he knows himself. Nina quickly notes she needs to be going, so “Mike” tells her to be careful. 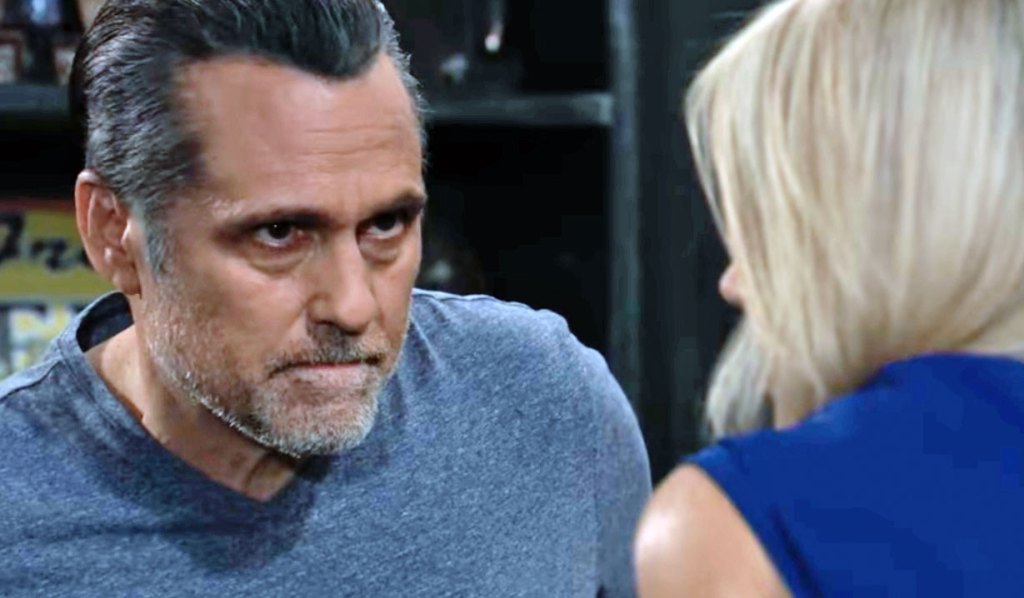 Nina meets Elijah out for a picnic. Nina makes small talk about the article she’s writing, and she’s worried about painting the town in a good light when there are all these robberies happening. She wonders where this crime is coming from. Elijah notes it started when “Mike” came to town, but Nina’s research indicates the crime was going on before “Mike” arrived. Elijah continues to blame “Mike,” but she doesn’t see shadiness in him. Elijah can see she likes the guy, and wonders if he’s why she hesitated when he asked her out. Nina swears she and “Mike” are not involved and not heading that way. Elijah is happy to hear it and goes to pull her into a kiss. 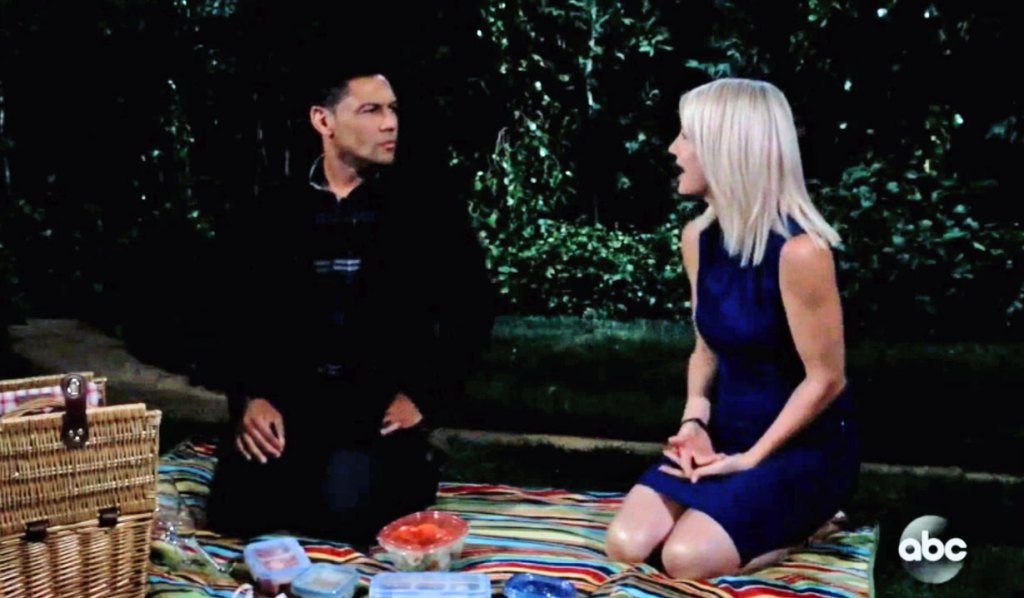 “Mike” breaks into Elijah’s office and ends up setting off an alarm.

At the Corinthos estate, Jax tells Carly that she has turned herself into Sonny and now she is the target rather than collateral damage. Carly feels she has no choice in the matter. She hopes Jason will be back and in charge soon, but until then she is in charge and has to keep the peace in Port Charles. Jax fears she is painting a target on her back and could very well wind up dead. 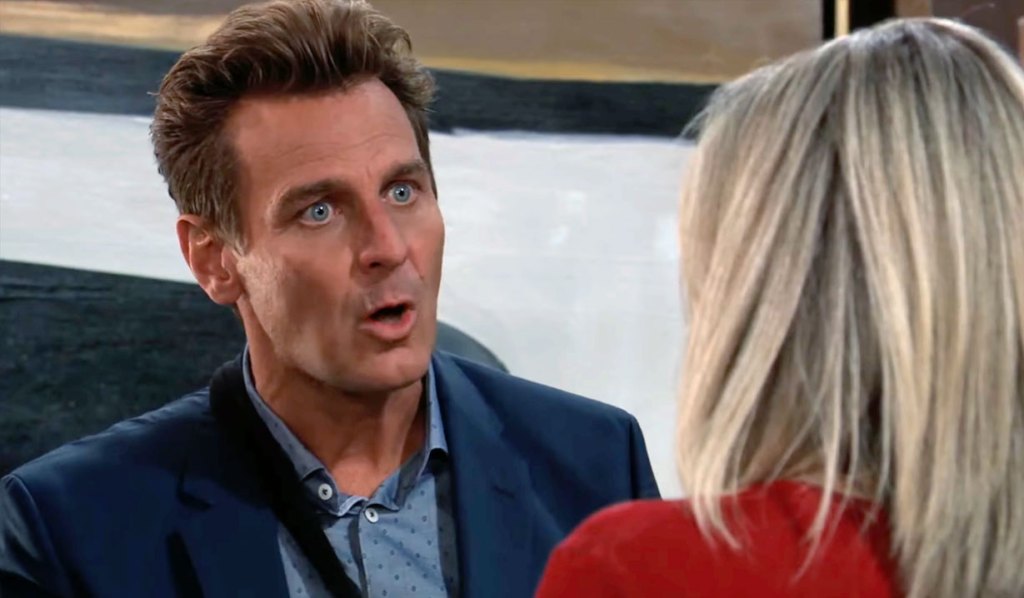 Jax says she’s convinced herself that all will be right when Jason returns, but it won’t. Carly admits she can handle this and is good at it. Jax is stunned when he realizes she likes being in charge, He can’t stop her, but he can take his daughter out of this house. Carly says Joss is grown up and should make this decision herself. Jax agrees to let Joss make the call. 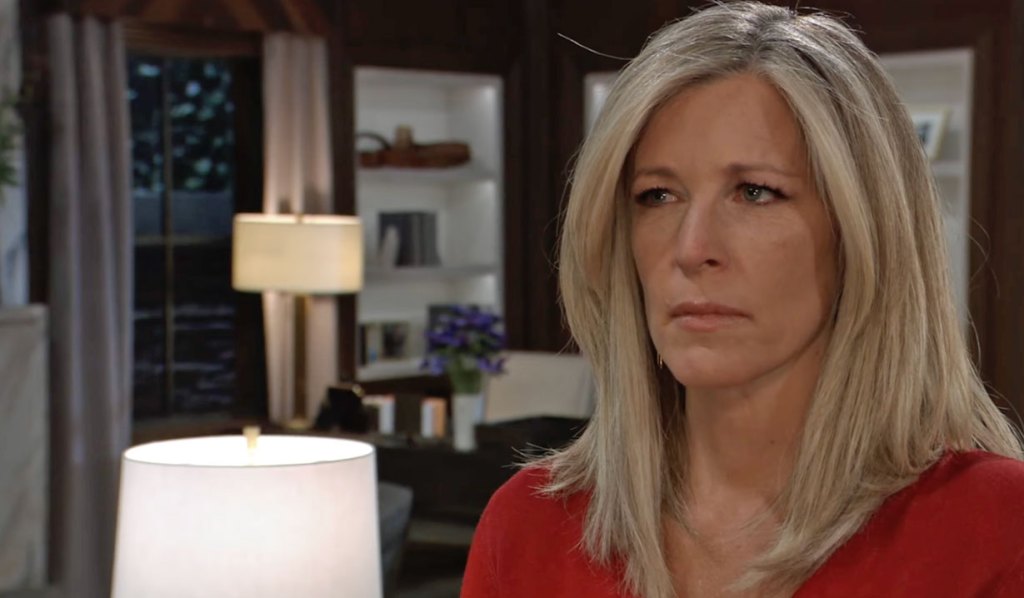 In the barn, Sam is relieved to find Jason is okay. She says she wasn’t followed, but Dante is not far away, so they must get out of there. Sam has brought fake passports to get them into Canada, and they’ll drop Britt off at a bus station on the way. Jason appreciates Sam helping, but insists she go back to Port Charles and forget she saw them. Jason reminds her that if they get caught then she will go back to prison along with him, and the kids will be left alone. She realizes he is right and will leave. She hands Britt a passport to use and wishes them luck. 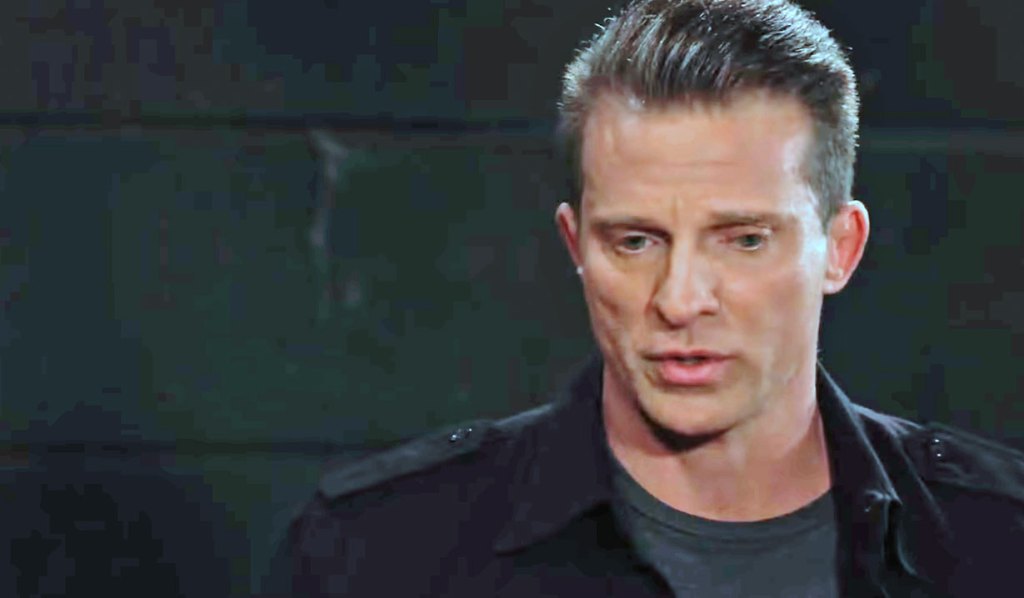 Once alone, Jason tells Britt that this is where she cuts out. Britt points out if she returns to Port Charles then Cyrus will kill her, but Jason says he’ll take Cyrus out first. He wants her to hide out in one of Sonny’s safe houses. Britt refuses to leave him, noting her only real options are to go on the run with him or watch herself deteriorate in a safe house. Jason relents and allows her to come with him. He insists on driving though because she’s a terrible driver and will draw attention to them. She refuses to let him pass out behind the wheel and kill them both, so he hands her the keys. 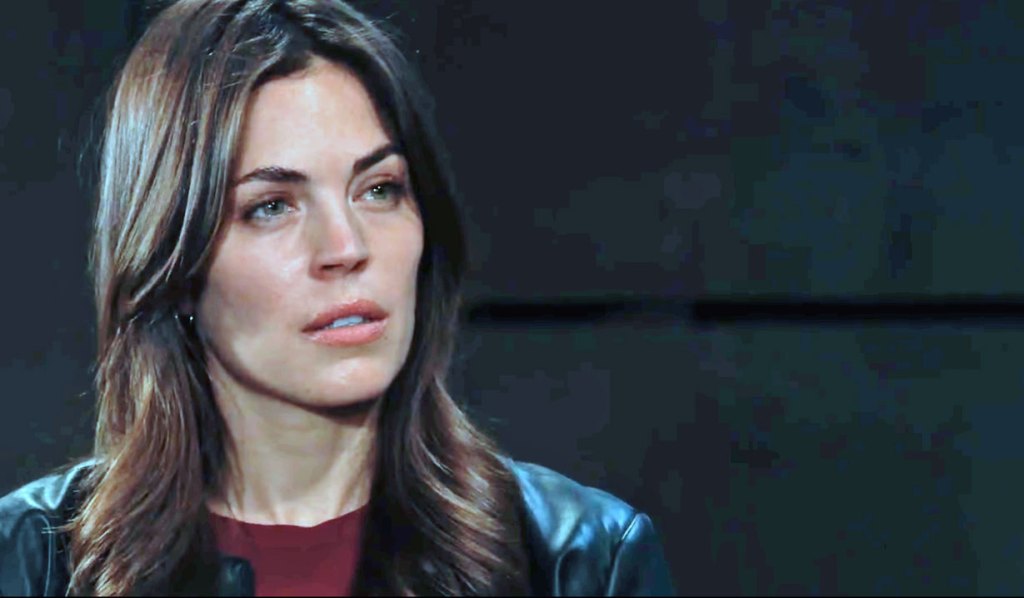 On the next General Hospital: Carly wants her will revised, and Phyllis tells “Mike” that she knows what he’s been up to.

Get your free daily soap-opera fix for General Hospital — and all of the other daytime dramas — delivered straight to your email inbox by signing up for Soaps.com’s newsletter. And don’t miss our gallery of soaps’ best and worst moms.

As Sam Races to Find Jason,...