Gunfire Erupts as General Hospital Goes Into Locked Down

Monday, May 3, 2021: Today on General Hospital, Finn tells Liz who killed Franco, Ava tries to keep Cyrus distracted, and Cameron ends up in a dangerous situation. 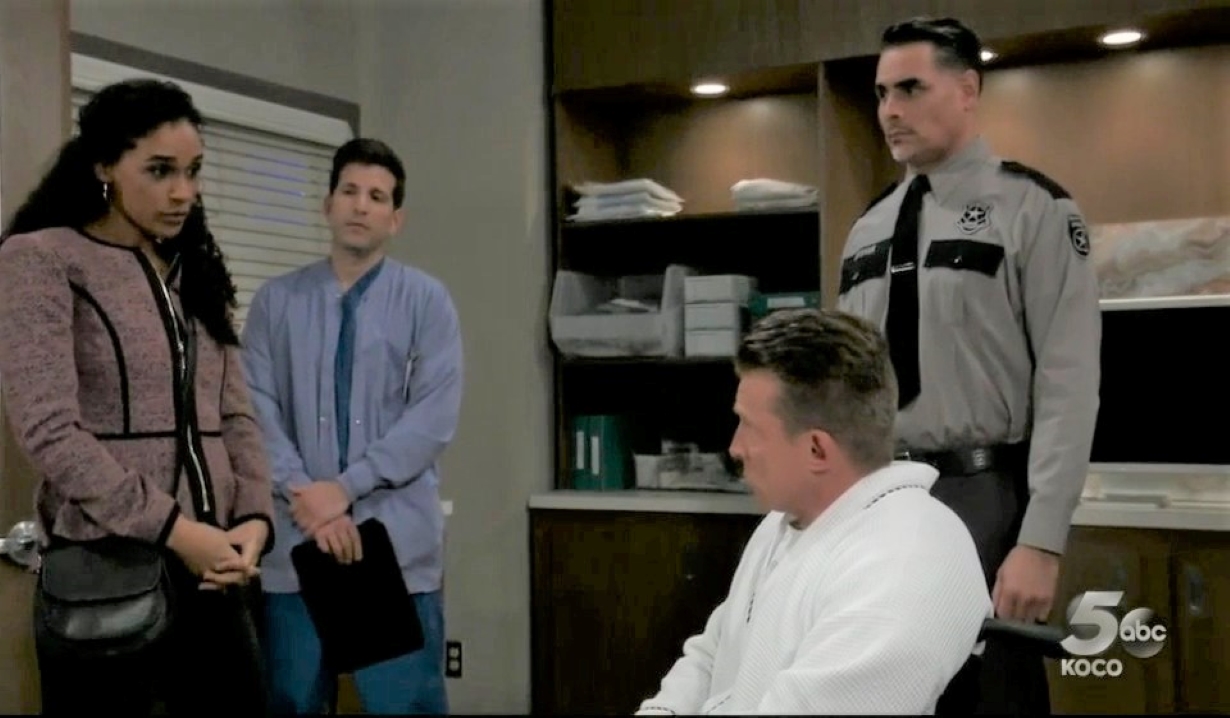 At the Corinthos compound, Carly calls Brick to see if he’s in position. She checks in with Spinelli to make sure the security feed is jammed. They worry that Jason won’t be out in time for his meeting with the five families. If he doesn’t show up, they’ll look weak.

Jordan finds Brick in the parking garage of General Hospital. He claims she’s just waiting for his sister and she tells him to have a good night and walks off. Spinelli and Carly are watching this through a video feed and start to panic.

Cameron walks the hallways of General Hospital. He calls his brother and tells him to put some music on in his room and close the door so Liz thinks he’s at home.

An orderly arrives in Jason’s room to bring him out for tests. After the guard helps him into the wheelchair, Jordan shows up and says the tests have to wait. She quizzes him about getting stabbed by Shawn. He won’t say anything, so she leaves.

Jordan heads down the hall, she asks about the tests at the nurses’ station. She’s told the tests were unnecessary and he was discharged already. When she returns to Jason’s room, Jordan discovers Jason has escaped and the guard is unconscious. 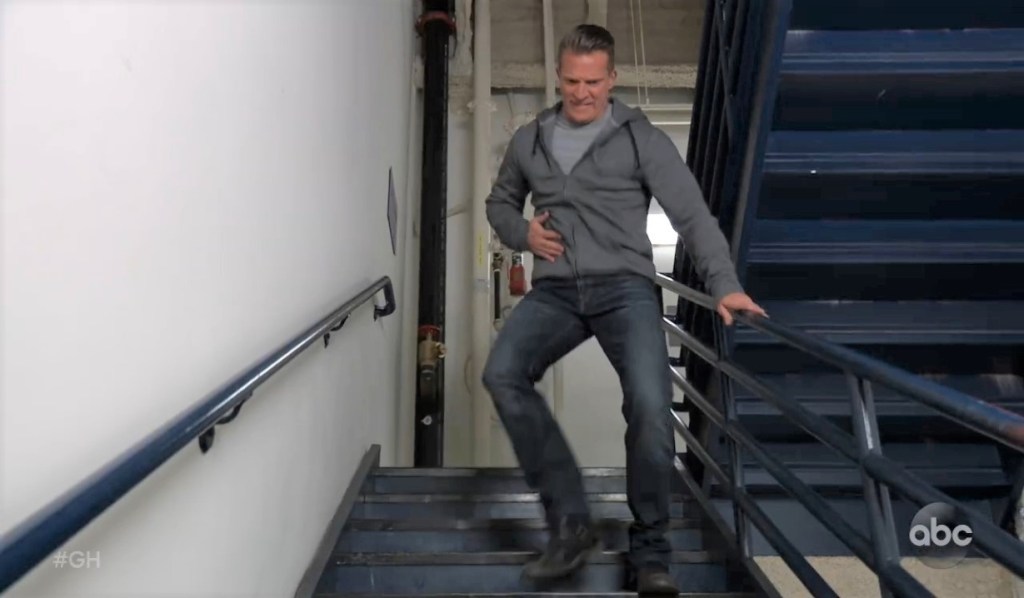 Jason runs down the stairs to the garage. Before he can get in Brick’s car, he worries about Britt and runs back in. 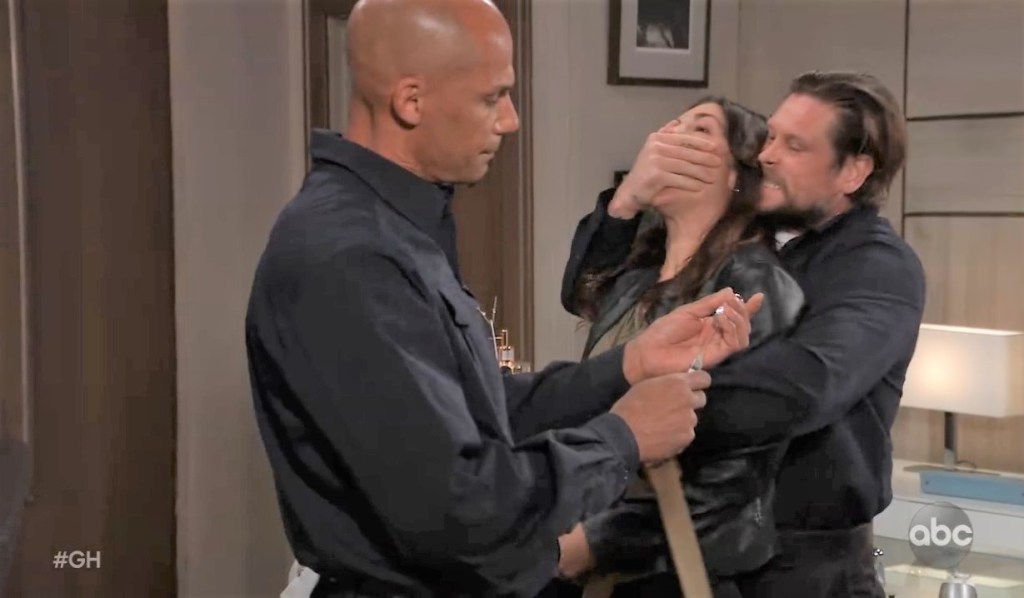 Finn drops by Britt’s office and asks her to sign off on some overtime. He wonders why she’s in such a hurry to get out of there. After he walks off, the janitor comes in and, assuming he works for Jason, Britt reminds him he should be on the tenth floor. He walks out and immediately calls Cyrus, who orders him to call in more men and kill Britt. Soon, they return to her office and grab her. Jason bursts in and helps her fight them off.

As Jason and Britt run through the garage, Cyrus’ men and Brick start shooting. After Brick kills one of the gunmen, Cameron arrives and crouches by the body. When he sees Jason and Britt hobbling to the car, he takes a shot at them, hitting Jason. As they crawl into the car, Jordan shows up and levels her gun at Cam. 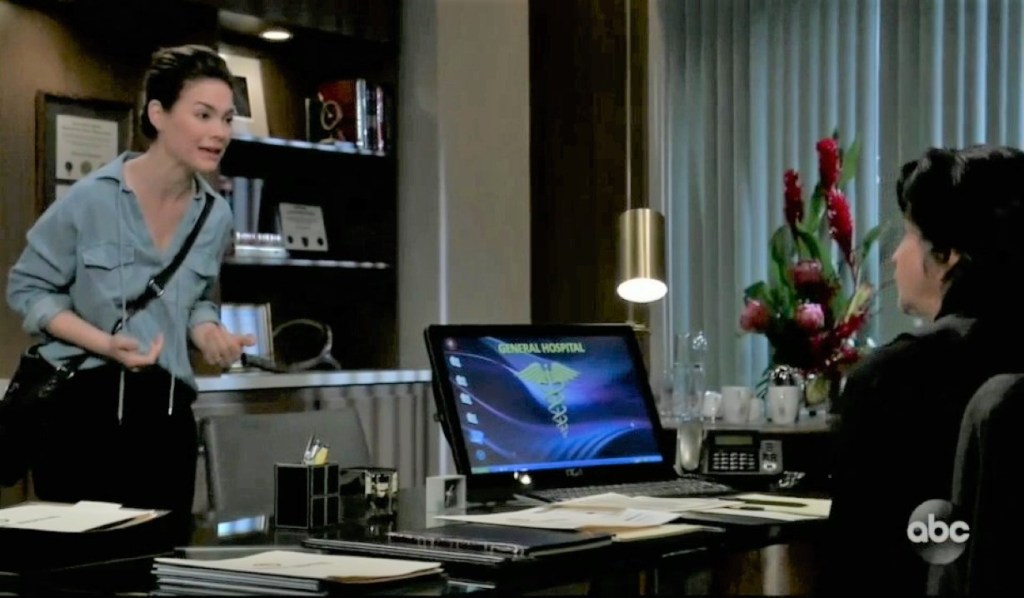 Finn heads to his office. Liz bursts in and demands to know what he injected into Chase. She’s worried about her job and threatens to call her union rep about what she saw. He informs her that Peter poisoned Chase… and murdered Franco.

Back at the Corinthos compound, Carly and Spinelli freak out as their surveillance footage of the hospital garage goes blank. 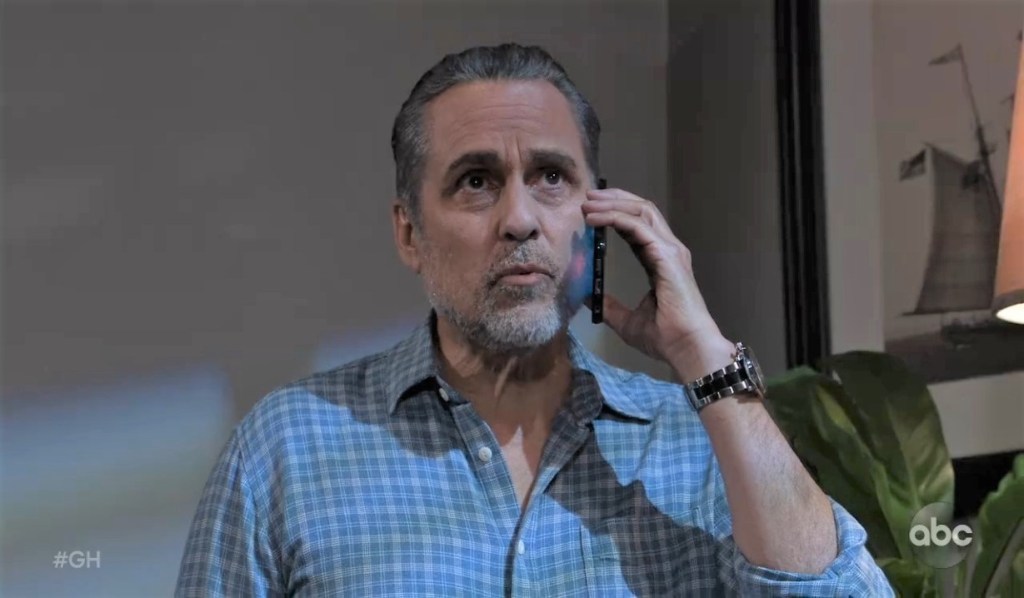 In his room at the Tan-O, “Mike” answers a call from Nina. She tells him to stay there and wait for her. 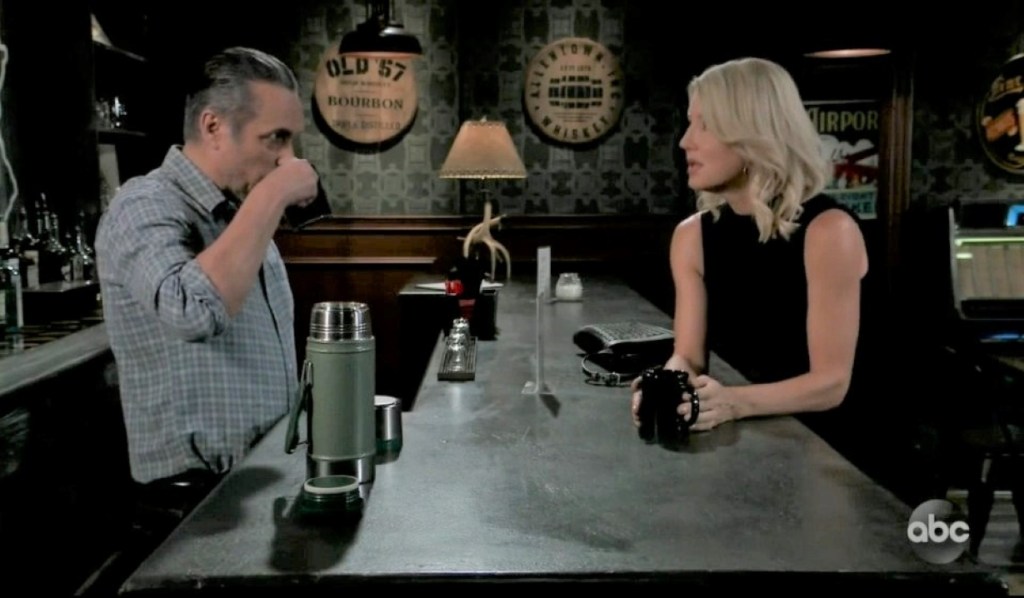 Trina finishes her meal at the Tan-O and compliments Phyllis on how great the sauce was. Nina shows up and tells Trina she needs to go because Joss is waiting. They chat and Nina tells her Nixon Falls has a lot more action than it seems. Moments after Trina exits, “Mike” comes in. They discuss her plans. She admits she’s found some peace in the small town and isn’t ready to give it up. He’s been waking up at night and wondering who he was, but he likes his new life and doesn’t want to walk away from it. They nearly kiss but Phyllis comes in. 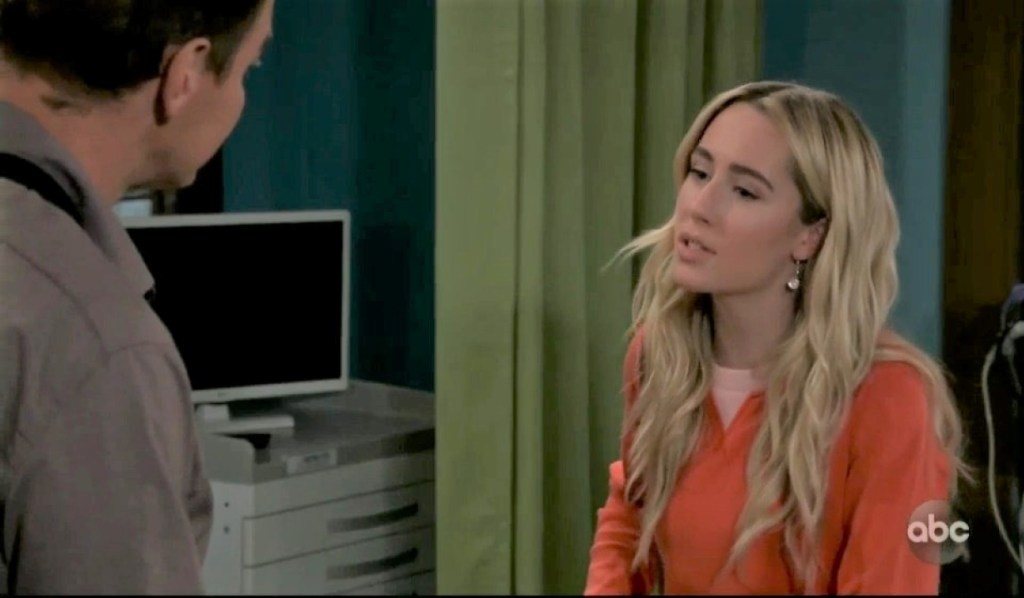 At the clinic in Nixon Falls, Joss asks Jax about his bullet wound and he tells her about the shootout. Reluctantly, she admits that she didn’t go to the tournament because she injured her ankle. She feels like everything is going wrong and is worried about disappointing him. He assures her that would never happen. Trina shows up and Jax tells Joss she should call her mom and tell her where she is. Carly demands she put Jax on the line and orders him to bring their daughter back to Port Charles immediately. Trina tells her that Phyllis gave her a jug of pasta sauce she can taste in the car with bread. Joss says she’s off carbs. 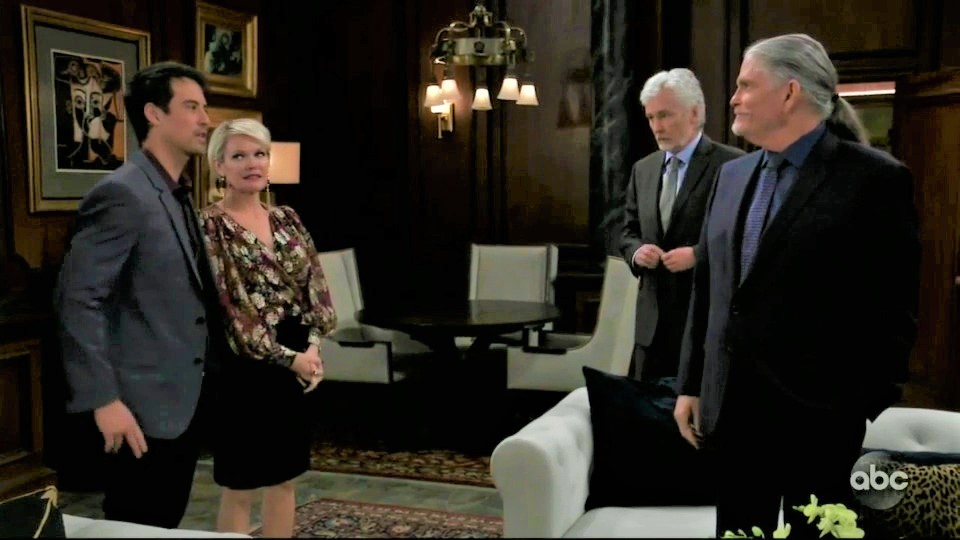 At Wyndemere, Nikolas is perplexed that Ava has invited Cyrus over for dinner. She tells him desperate measures are necessary to get to the bottom of what he’s doing. Kevin and Laura join them. They have drinks and wonder why Carly needed them to distract Cyrus so much. He and Martin arrive with flowers and cake. Nikolas gets the brothers drinks and hopes they can have a truce. Martin corners Nikolas and tells him he’s not happy that he used him to get to Florence. Ava announces dinner is served. As they file in, Cyrus asks Laura if she’s willing to give him a chance. After dinner, they all chat about Spencer and his notorious reputation. Cyrus says he’s been keeping tabs on him. The prince tells him his son is outside of the realm of his observation. Laura starts ranting at Cyrus and accuses him of using family as a weapon. Cyrus points out how much Laura enjoyed attacking him. After he leaves, his goon calls him to say that Britt and Jason escaped.

On the next General Hospital: Liz is beside herself.

Get your free daily soap-opera fix for General Hospital — and all of the other daytime dramas — delivered straight to your email inbox by signing up for Soaps.com’s newsletter. And don’t miss our gallery of soap stars’ behind-the-scenes bloopers.

<p><em>The Young and the Restless</em>‘ Tracey E. Bregman (Lauren) and Christian Jules LeBlanc (Michael) struck not just a pose but a <em>yoga</em> pose at their 2013 session.</p>

<p>Nevertheless, Days of Our Lives’ Nadia Bjorlin (Chloe) wasn’t about to let Alison Sweeney (Sami) or Arianne Zuker (Nicole) get a hand in edgewise once she got a hold on James Scott (ex-EJ).</p>

Ava, Carly and Laura Hatch a Plan to...