Tuesday, April 20, 2021: Today on General Hospital, Cyrus gets his mother back, Alexis is saved by one of Cyrus' people in prison, and Anna needs a favor from Jason. 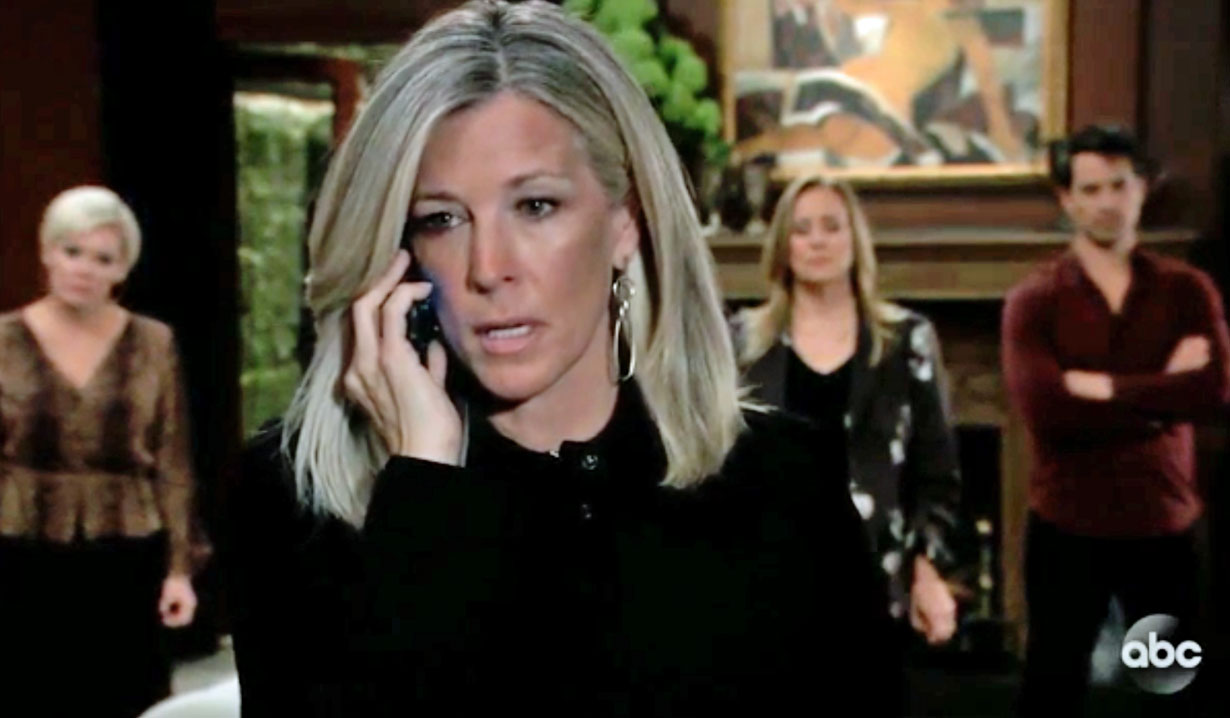 At Jordan’s place, she confides in Taggert that she and Curtis are splitting. Taggert feels this goes back to Cyrus, and he is determined to find something to stop Cyrus. 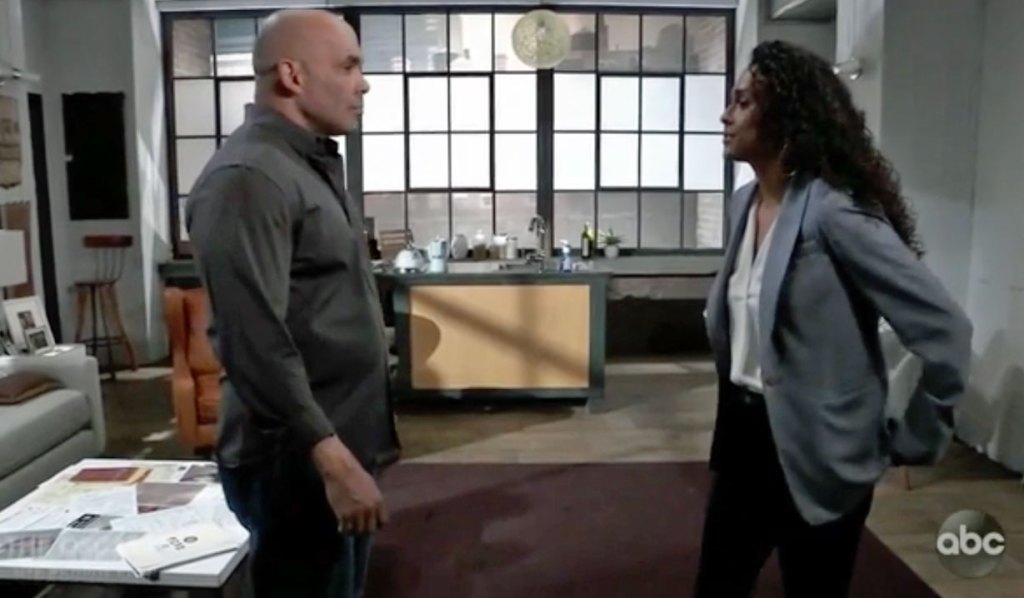 In Pentonville, Hilda threatens to break Alexis’ teeth because she talks too much. Before she can teach Alexis a lesson, another woman appears and stops her. Hilda asks the woman, Steph, if she wants in on the action. Steph doesn’t and orders Hilda to forget about Alexis. Hilda departs, and Alexis thanks the woman. Steph says, “That’s what they pay me for.” 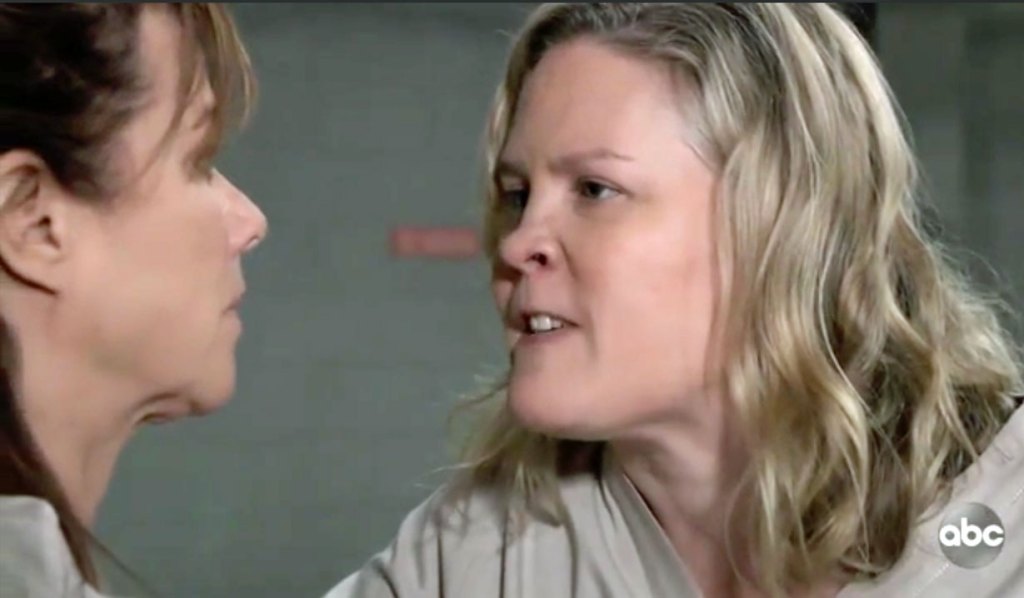 Alexis regroups with her cellmate Maggie and tells her about Steph intervening to help her, but she has no idea why. Maggie tells her that Steph is one of Renault’s people, and she’ll point out Renault’s other people so she can steer clear of them. Alexis mentions that Steph said she was being paid and doesn’t understand what protecting her gets Renault. Maggie suggests she not ask too many questions because she has someone looking out for her. Alexis realizes it is Nikolas and wonders what he’s done. 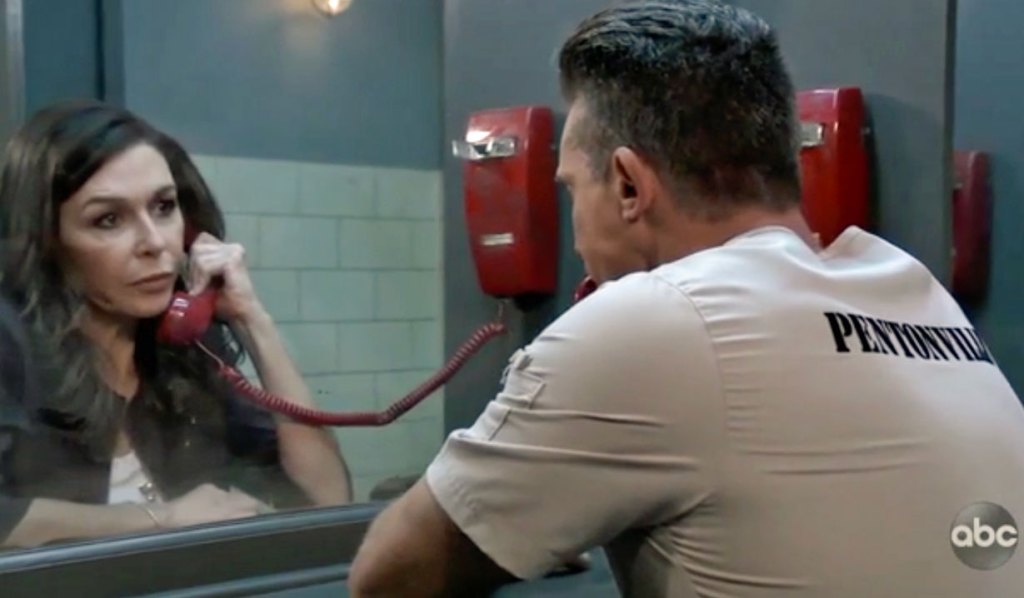 Anna pays a visit to Jason. Jason asks Anna if she’s made any progress working with Carly. Anna admits they had a plan, but Peter got ahead of her and it’s on hold. Jason realizes Peter is threatening someone she cares about. Anna is trying to manage it, but her hands are tied. She needs Jason’s help in trying to persuade Carly from doing something rash. Jason can try but knows Carly will do what she wants to do. He asks what she’ll do about Peter. Anna tells him that she hopes to send him to prison, but if it comes to it, she’ll eliminate Peter herself.

Trina stops by the Corinthos place to check in with Joss. Joss admits to her friend that she’s been waitlisted by Southern Coastal University. The doorbell rings and Joss notes the guards are supposed to call before letting anyone come to the house. She opens the door to Cam, and Trina decides to split and avoid the tension. Joss invites Cam in, and he tells her that he misses his best friend. Joss has missed him too, and they agree to stop fighting and put things behind them. 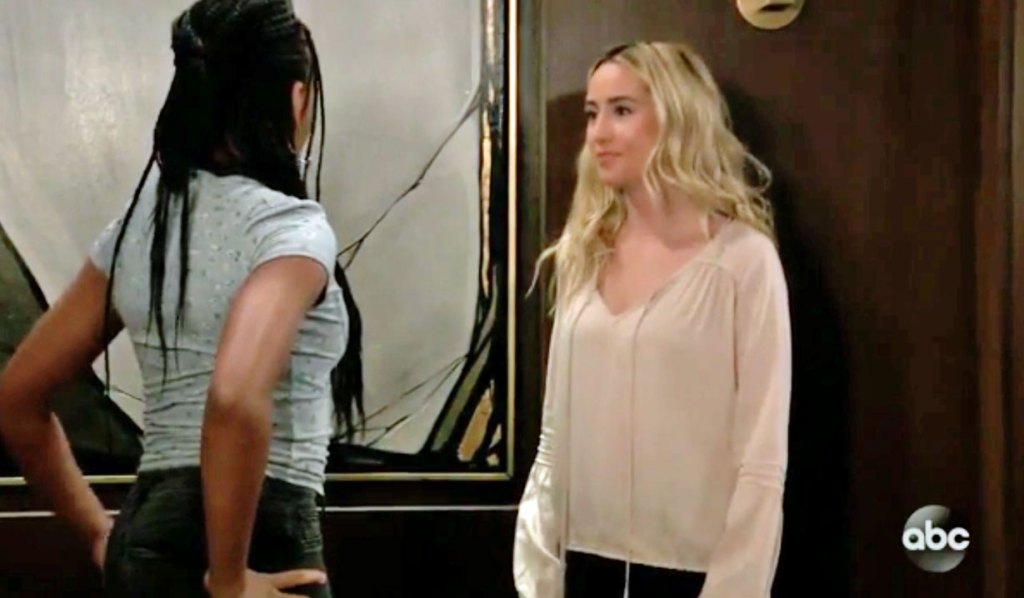 Joss asks how Cam is doing. Cam admits things at home are rough, and Jake still isn’t talking to him. Cam has apologized, but it’s hard because he still knows Jason killed Franco. Joss can’t believe him and tells Cam that he needs to leave. She won’t allow him to bash her mother’s best friend and someone who is important to her. Cam asks if she’s saying they can’t even hang out anymore, or even be friends. 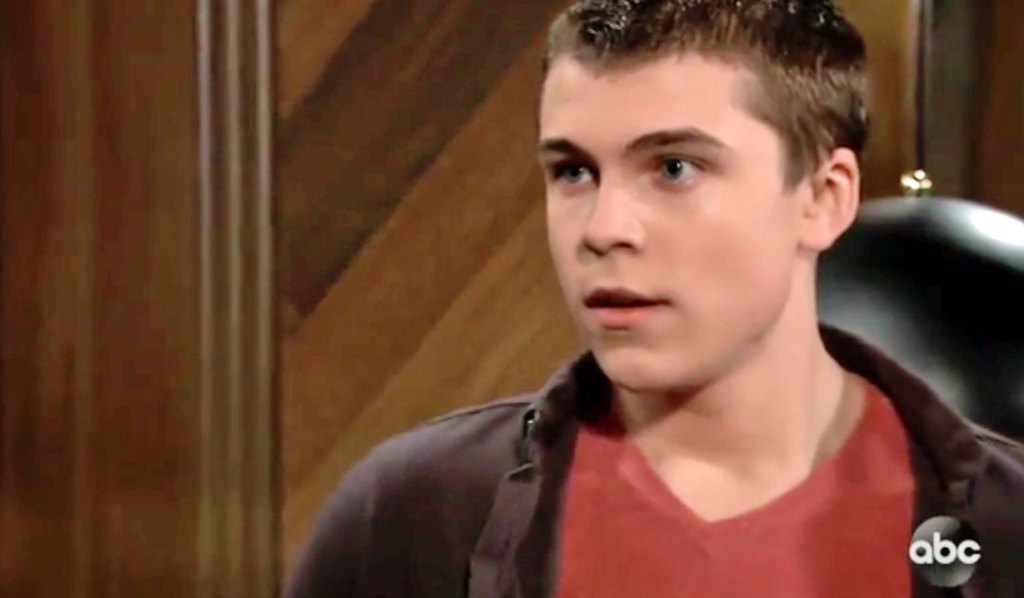 More: How Peter should die – and when!

At the steakhouse, Martin tries to duck out on his brother, but Cyrus asks him to stick around because he’s expecting good news. Curtis enters, and Cyrus excuses himself from his brother to have a few words with Curtis. Cyrus approaches him and says he heard about his marriage dissolving and is sorry. He also congratulates him on his new career, and hopefully, he’ll be better at it than as a PI who couldn’t even solve a case. Curtis wonders if he knows how his mom is. He reveals he saw her the other day and she couldn’t stop praising Martin but had nothing good to say about Cyrus. Cyrus thinks he’s bluffing, and Curtis says he’s right but he loved seeing the rage flashing in his eyes. Jordan arrives and stops Curtis from escalating things with Cyrus and drags him off. 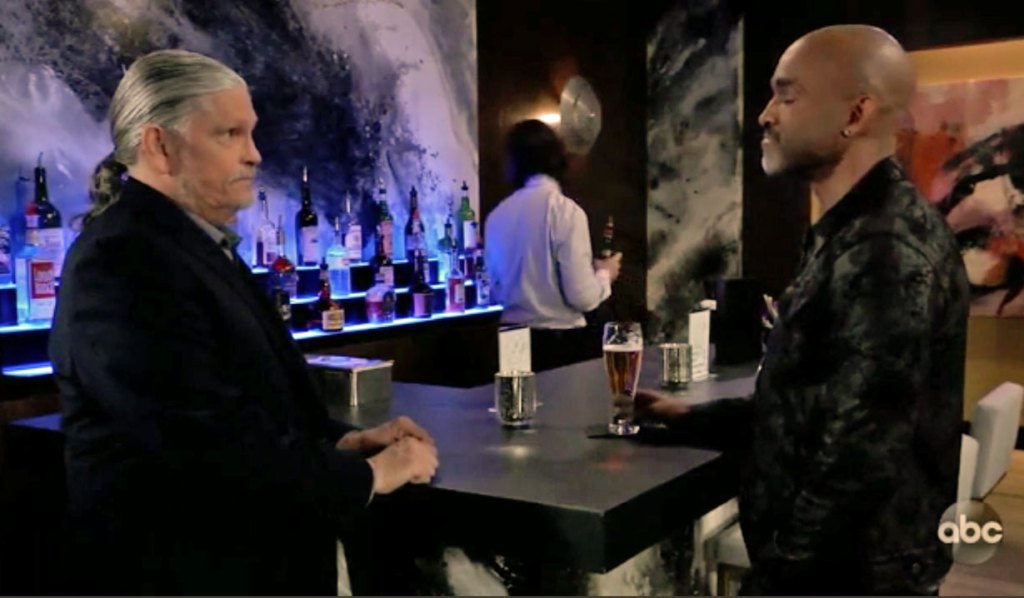 At Wyndemere, Nikolas’ man Jackson is at the location in Vermont and is ready to go in and get Florence. Over the phone, Nikolas gives him the green light. However, Jackson reports they have a problem. Suddenly Carly and Laura enter, and Carly explains she gave her men a head’s up that they were going to be attacked. Jackson relates to Nikolas that the guards, nurse, and Florence are locked in a panic room, and there could be causalities if they proceed. Carly reveals the nurse is her mother, and Laura orders Nikolas to shut this down. 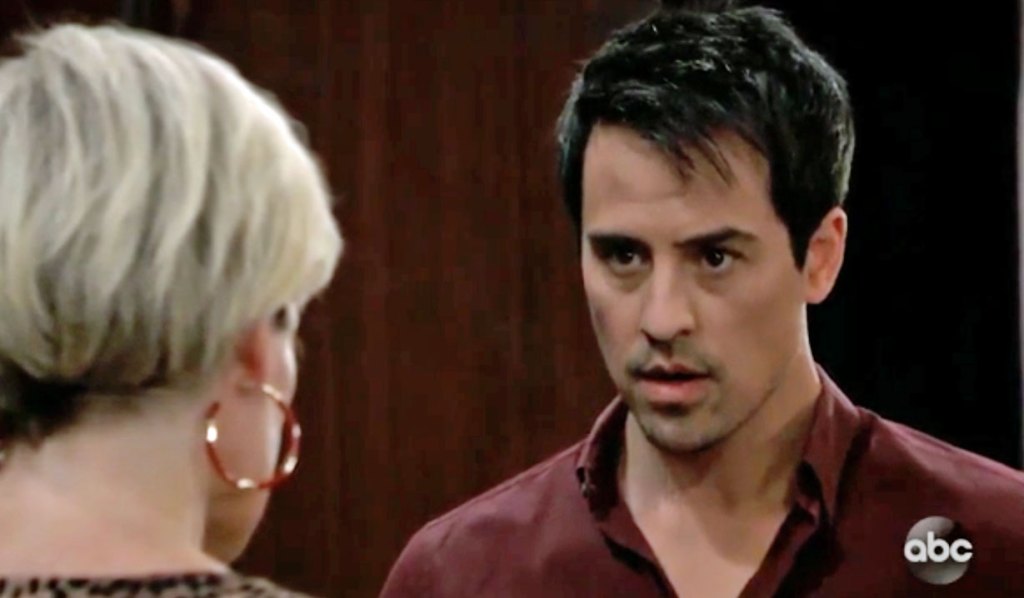 Nikolas fears there is no other way to protect Alexis. He tells Carly to have her people surrender Florence otherwise his people will go in. Carly relents and orders her man to hand Florence over to Nikolas’ man. Carly calls Nikolas a naive little boy because now Cyrus knows he has leverage over Nikolas by using his aunt at any time. Carly storms out, and Laura tells Nikolas that Carly is right and he’s in debt to Cyrus now. She tells her son that he’s made a terrible mistake. Laura leaves, and Nikolas asks Ava if she’s going to let him have it too. Ava doesn’t agree with what he did, but she knows he did it to protect his aunt and she loves him for that.

Trina stops by Jordan’s place to see her dad. When she finds out Jordan isn’t there, she asks her dad if he and Jordan were ever a couple. Taggert swears he and Jordan only worked together and are friends and nothing more. She inquiries about his trial, but he doesn’t want her to worry about that and focus on graduation and college. Trina wonders if there is a chance that he’ll make her graduation. He is hoping he will be there.

Back at the Steakhouse, Cyrus gets a call and tells Martin that their mother is coming home. 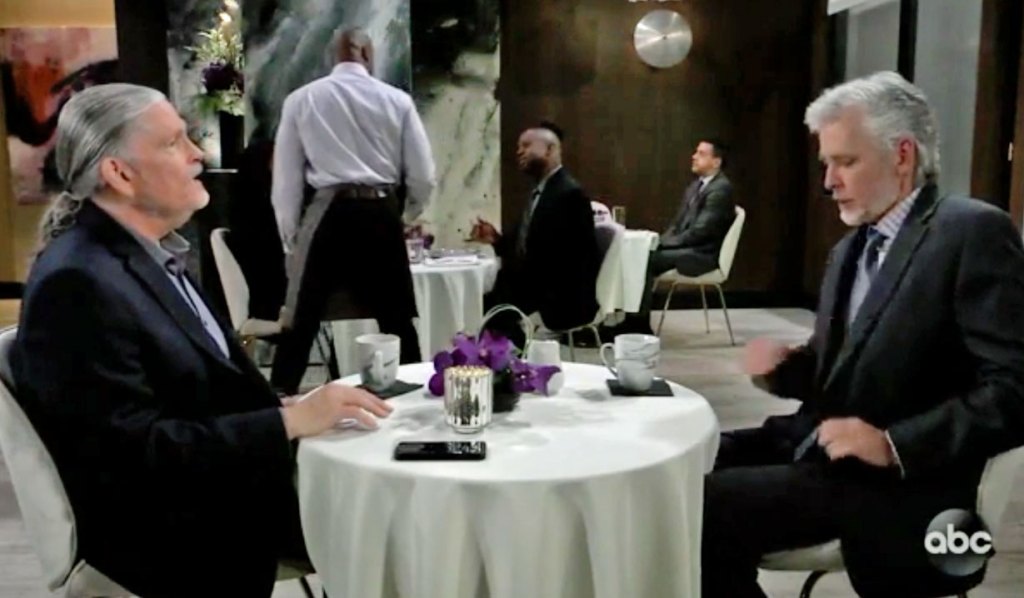 Carly visits Jason in Pentonville and Jason can see on her face that Cyrus got Florence back. Carly tells Jason they have to move now.

On the next General Hospital: Sonny asks Nina to dance with him at the barn dance, and Carly tells Jason they are going to do it her way.

Get your free daily soap-opera fix for General Hospital — and all of the other daytime dramas — delivered straight to your email inbox by signing up for Soaps.com’s newsletter. And don’t miss our gallery of Chad Duell’s run as Micheal over the years.

Jason and His New Cellmate Are...