Thursday, April 15, 2021: Today on General Hospital, Sasha and Brando make love, "Mike" digs into Elijah's past, and Joss makes a confession to Carly. 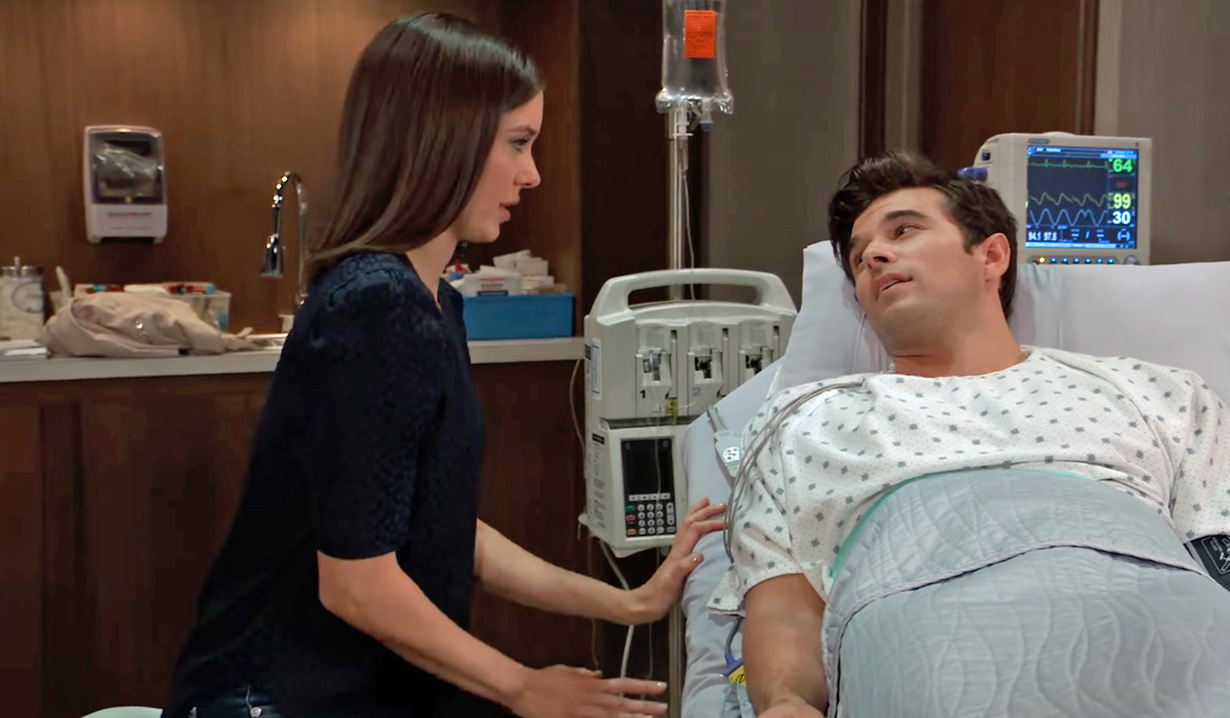 Brando is working on a truck in his garage when Sasha arrives. She wanted to see him and lets him know that she and Michael ended things. Their conversation turns to Brando working for Cyrus, which she doesn’t understand. Sasha quickly realizes he’s being blackmailed by the gangster and deduces it has to be about Dev. Brando admits she’s right and fills her in on the whole story, as well as his mom’s part in telling Cyrus the truth. Brando plans to bring Cyrus down when he gets a chance, and he hates him for exploiting his mother and Sasha. She had no idea he had taken such an interest in her. They move in and share a kiss, which leads to them making love inside the truck. 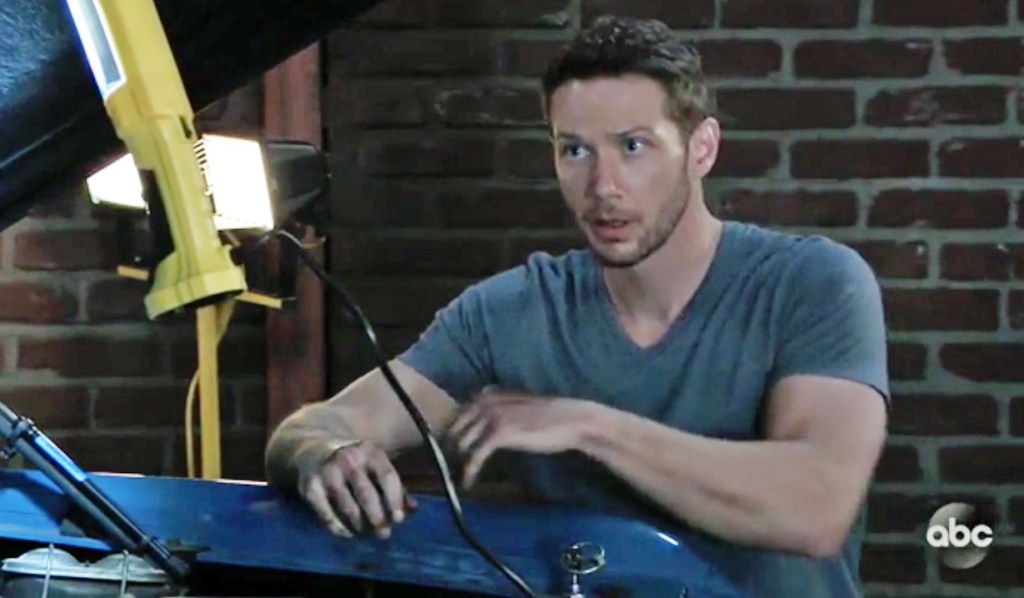 Dante drops by the Quartermaine gatehouse to have beers and chat with Michael. Michael wonders if Dante has considered going back to being a cop. Dante isn’t sure. Michael thinks the department would be lucky to have him, and so would Chase because he would have someone to lean on. Dante wonders why Chase would need someone. Michael explains that he and Willow are together for real and they love one another. Dante is happy for him. 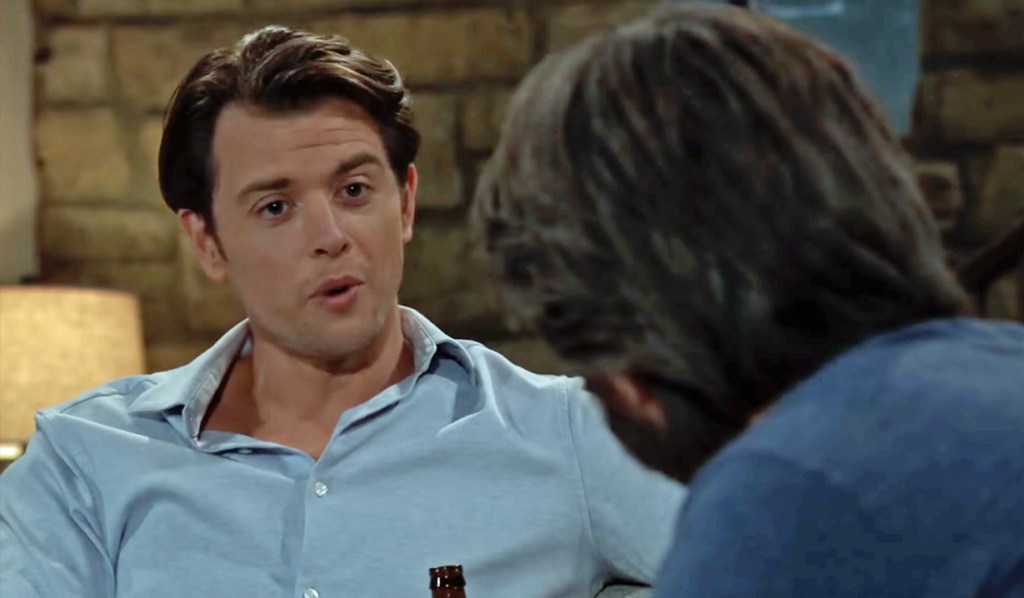 Willow sits with Chase in his hospital room. The cop is feeling better, so Willow tells him that they need to talk. They are interrupted by Gregory and Finn’s arrival. Finn tells Chase that all his tests seem to be clear, but he wants to keep him awhile for observation. Gregory tells Willow he’s glad she’s there and back with his son. Gregory excuses himself to get them some coffee, and Chase apologizes to Finn for going off on him at dinner. Chase tells Finn that the two of them are okay. Finn exits, and Willow wonders what happened at the dinner. Chase doesn’t want to talk about it, he’d rather talk about what she wanted to tell him. 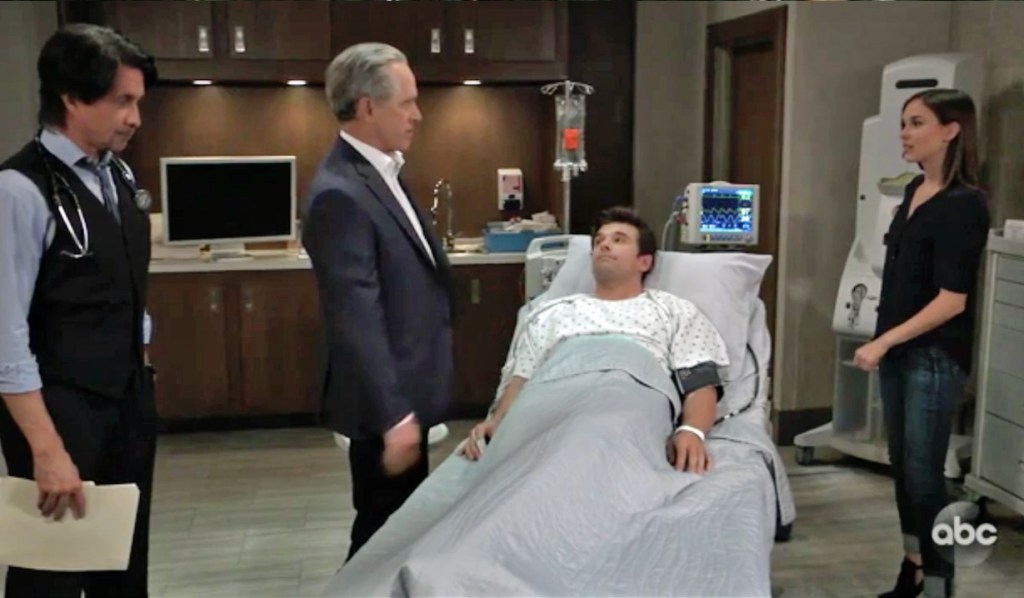 Willow takes Chase’s hand and is alarmed that it’s so cold. The detective realizes he can’t feel his hands or his feet. Finn and Gregory return, and Finn examines Chase. He diagnosis him with peripheral neuropathy, and reveals it’s a symptom of something more serious. It could be a tumor, a toxin, or something else. Suddenly Chase is hit with intense burning pain. Finn rushes to get him something for the pain, and Willow sends a text. 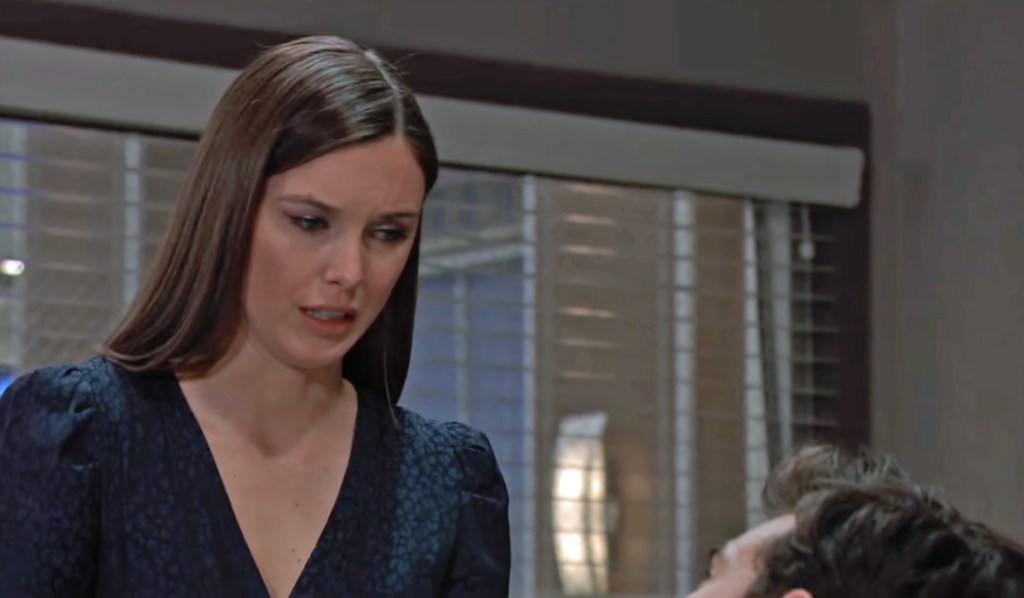 Gregory and Finn step out of the room, and Finn warns his dad that this could be serious. Back in Chase’s room, he urges her to go home, but she refuses to leave when he’s so sick.

At home, Carly has a vision of Sonny. She can’t believe he’s there, and she needs his help with Jason. Sonny says he’s already working to take care of things. Joss interrupts Carly’s fantasy, and Carly again senses Joss isn’t telling her something. Joss tells her mom that she got into PCU and a spot on their volleyball team. Carly is thrilled for her daughter. 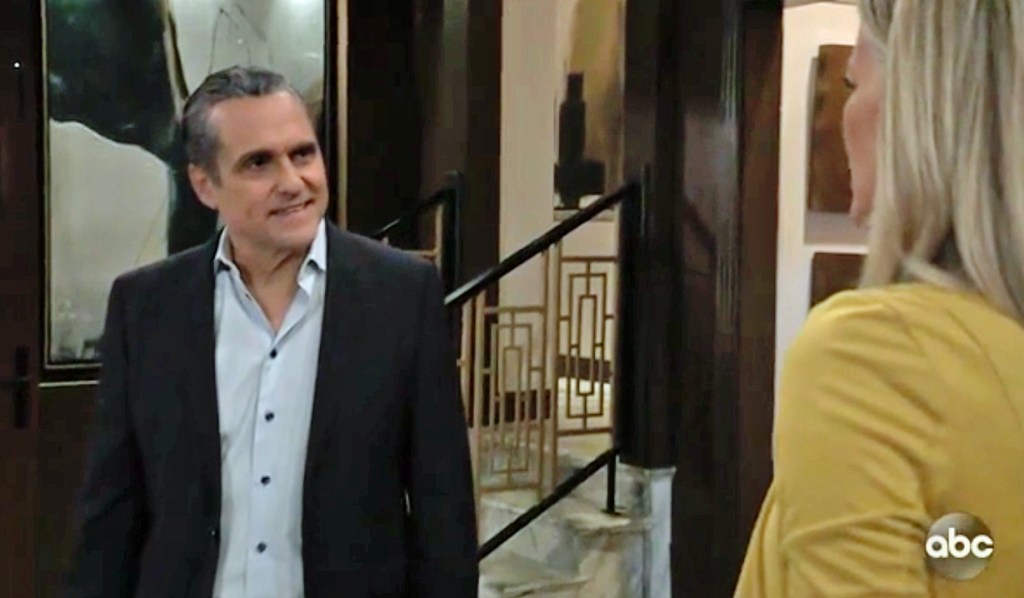 At Tan-o, Nina is startled by a call from Jax. He has something important to tell her and asks where she is so he can do it in person. Phyllis sees Nina struggling to deal with Jax, so she asks Nina for her phone. Nina hands it over and Phyllis tells Jax to leave Nina alone because she’s finally starting to heal. She hangs up, and Nina thanks her. 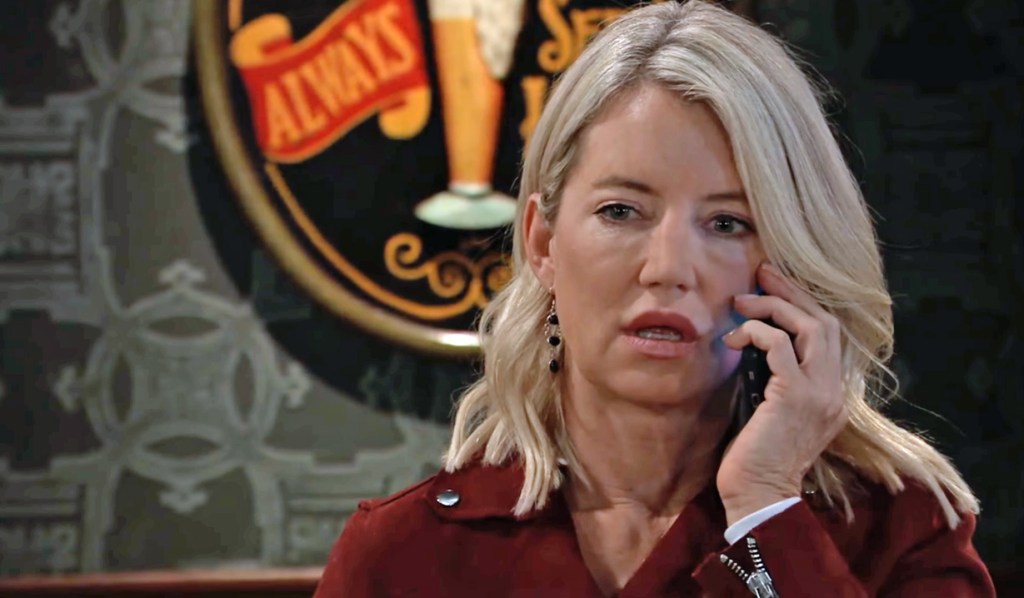 At the bar, Elijah can’t believe “Mike,” who has no last name, is calling him a fraud. “Mike” warns him that he’ll be keeping an eye on him. Elijah and Nina leave for their tour of the town, and Phyllis tells “Mike” that she just did something selfish. She explains what she just did for Nina, which in part she did because she loves having her there. “Mike” thinks she did the right thing, and Nina seems to be the kind of girl who gets herself in trouble. Phyllis says, “Trouble, or Elijah?” Phyllis reminds him that she and Lenny have known Elijah for a long time. “Mike” wonders about his past jobs, and Phyllis recalls one place he worked. Later, “Mike” calls the business up acting like he needs an opinion on hiring Elijah. He learns Elijah embezzled from their company but was never convicted for it.

Elijah shows Nina the sights and he talks about after her article is published maybe a tourist who knows “Mike” will drop by. Elijah wonders how Nina came to know Lenny and Phyllis. She doesn’t really want to talk about that and takes a raincheck on the rest of the tour. 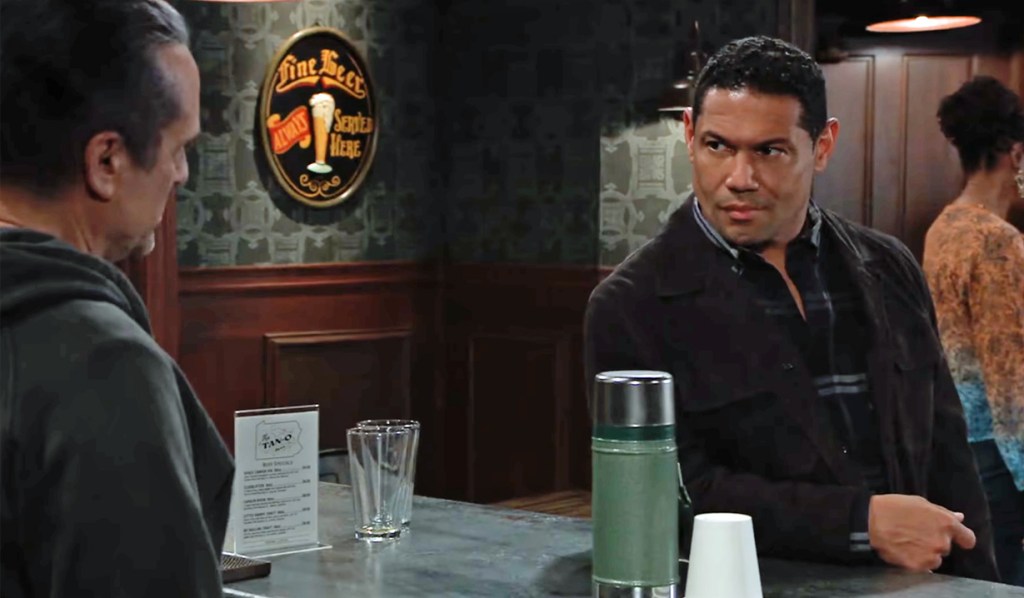 Nina and Elijah return and Nina says she and Elijah had a good time. “Mike” shakes his head. Elijah gets going, and “Mike” follows him out. Outside, “Mike” warns Elijah that he’s onto him. Elijah smiles and walks off. 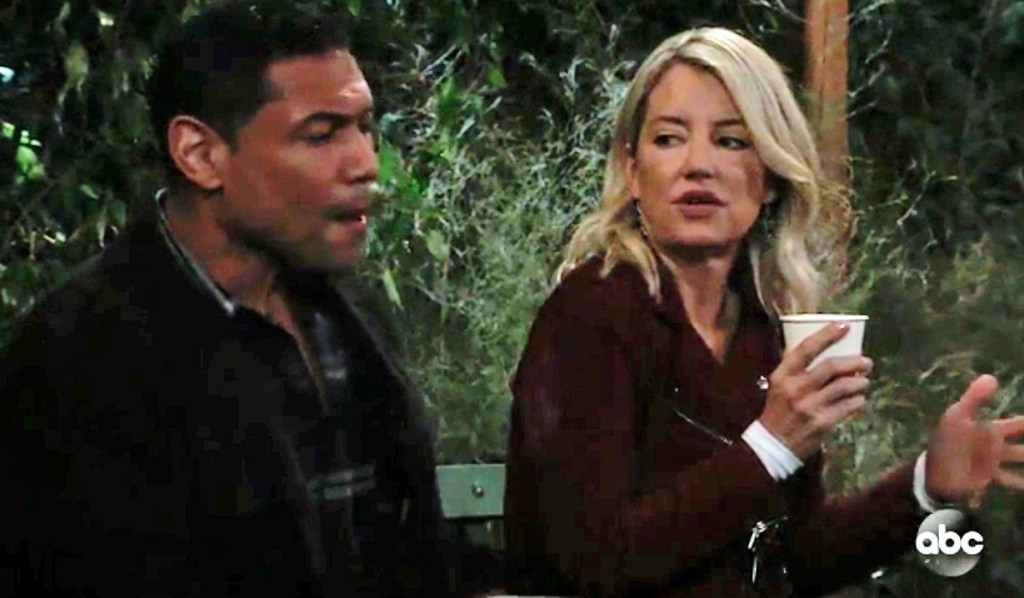 Jax stops by the Corinthos place and lets Carly know he spoke to Michael about letting Nina see Wiley. Carly can’t handle this now as she already has enough going on with trying to fix things for Jason. They argue over whether Jason can handle himself, and Joss enters and tells them to keep their fighting down. Carly switches the subject and pushes Joss to tell her dad the good news. Joss tells him that she got into PCU and onto their team. He thinks that must take the sting out of being waitlisted. Carly wants to know why she’s never heard about this. Jax apologizes and leaves them to talk. Joss didn’t want to add to her mother’s plate with the news. Carly tells her that she is her top priority. Joss admits she wants to go to Southern Coastal because they have the best team, but also to get some distance from Port Charles and Cam. They talk about how Cam’s making terrible decisions in his grief, and Joss doesn’t know if their friendship can be fixed. Joss knows she has a lot to be thankful for, but everything seems so up in the air. Carly tells her daughter that life can be hard. They embrace.

Back at the gatehouse, Michael doesn’t see the texts come in from Willow. He continues talking with Dante, who says he’ll consider going back to the force. Dante and Michael toast. 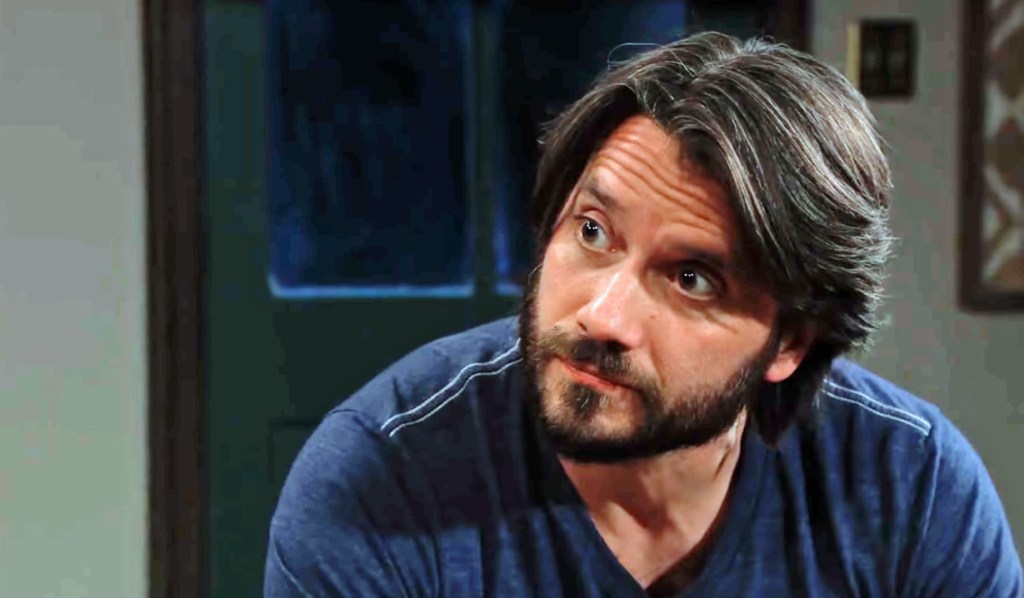 On the next General Hospital: Laura asks Martin what her son promised him. Sasha wants to talk to Brando about last night. Alexis has an encounter in prison. And Nina wonders if “Mike” wants to find out who he is.

Get your free daily soap-opera fix for General Hospital — and all of the other daytime dramas — delivered straight to your email inbox by signing up for Soaps.com’s newsletter. And don’t miss our soap stars before they were famous. 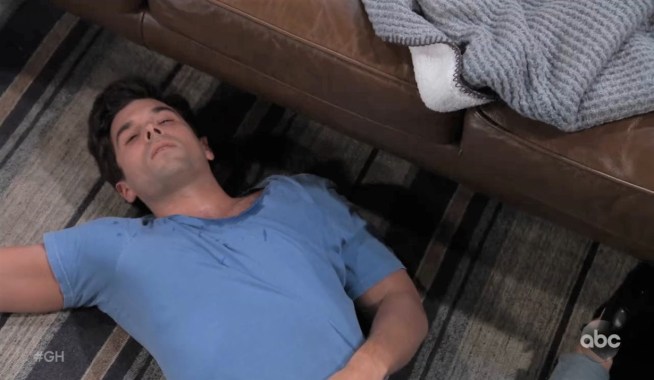 With Chase’s Life in the Balance, Anna Is Forced to Make a Hard Decision

Nikolas Discovers Key Information During a State of Panic 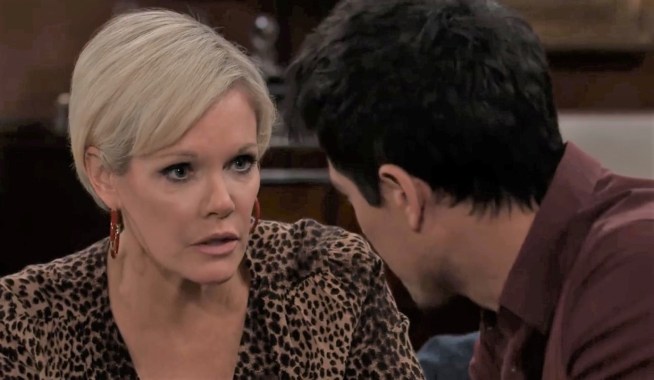