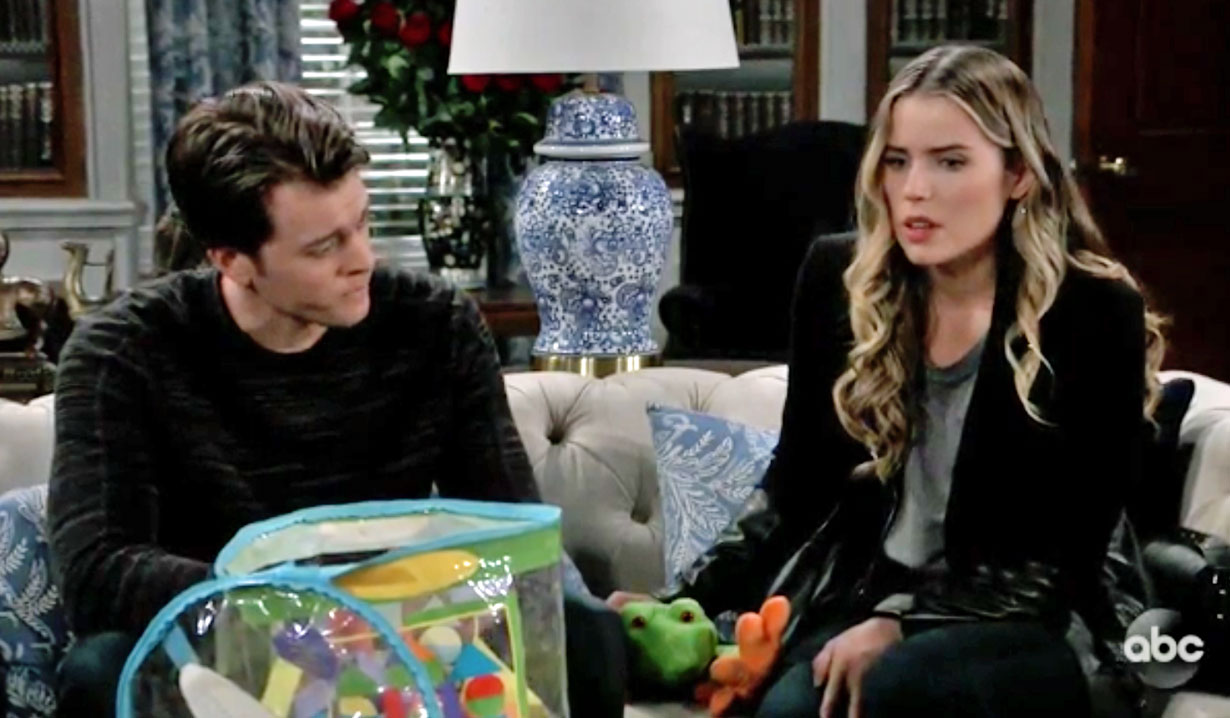 At the Quartermaine mansion, Sasha interrupts Michael and Willow just as they are about to kiss. She apologizes and says the housekeeper let her in. Willow decides to leave them to talk. Sasha asks if she interrupted a moment or was it her imagination. Michael admits it’s not her imagination and his feelings for Willow are not as resolved as he thought. He doesn’t know how Willow feels, but the more time he and Willow spent together the more it felt like they had a real marriage. Emotional, Sasha recognizes the way he looks at Willow because it is how he used to look at her. Michael says that doesn’t mean he doesn’t still love her. Sasha knows he does but does he want to be with her is the question he needs to figure out. 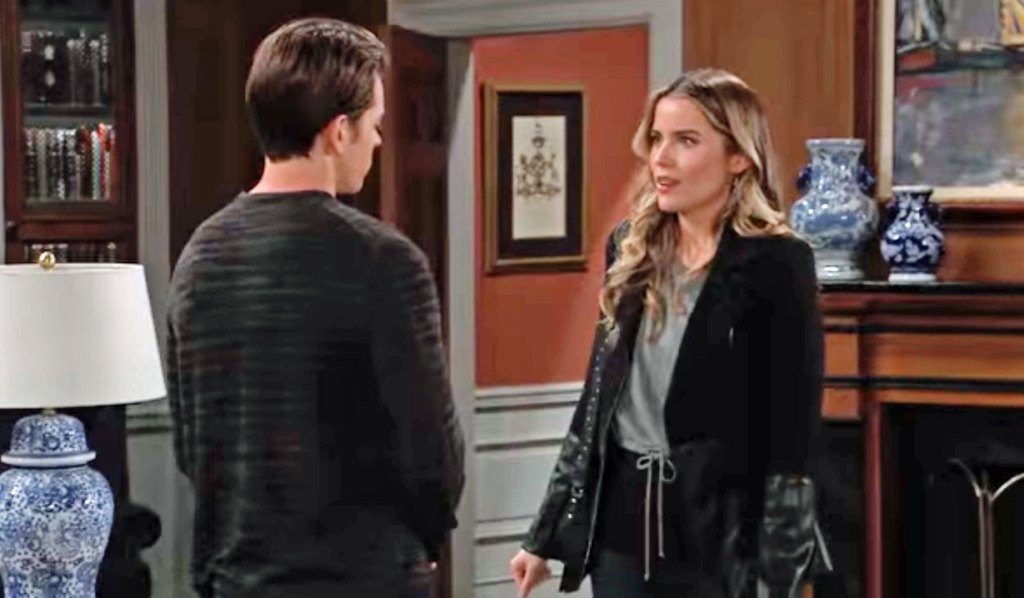 Up in Brook Lynn’s room, she talks to her mother on the phone while at the same time struggling with the fake pregnancy pad. Brook Lynn eventually ends the call when she notices it is oddly quiet in the house, which may mean trouble.

More: Pondering who Cameron Mathison’s GH character will be

In the foyer, Brook Lynn catches Willow racing out of the mansion and stops her. She sees Willow is upset and suggests they go in the den and talk, but Willow says Michael is in there with Sasha. Brook Lynn is confused as to where things between Michael and Sasha stand, and also what is going on between Willow and Michael. Willow says she is trying to work things out with Chase, but things with Michael got complicated.

At the Metro Court, Valentin tells Carly the burner phone that Gladys has been calling can’t be traced. Carly thinks they need to come up with another way to get Gladys to give them what they need to help Jason and prove Peter is guilty. 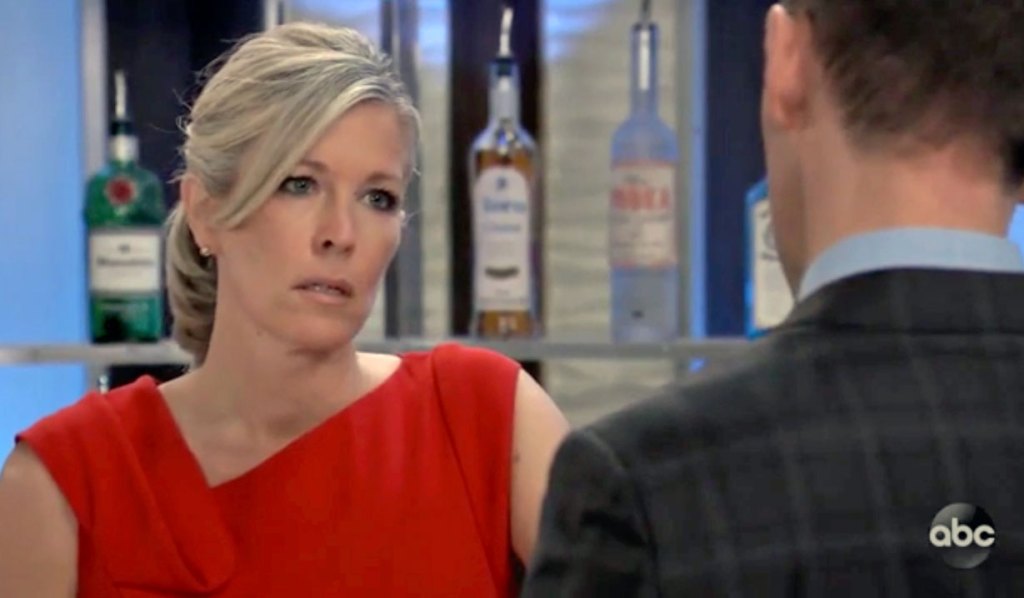 At Laura’s place, Cyrus thinks if Laura won’t help him find his mother then perhaps Nikolas will in order to protect his family. Cyrus tries to make a deal with Nikolas, and says if he brings his mother home then he’ll make sure his Aunt Alexis is safe in prison and no one bothers her. Nikolas interprets the statement to mean Cyrus won’t send his people after her if he helps him. Laura tells Nikolas not to let Cyrus extort him, and wonders if this is the family Cyrus wants. Cyrus screams, “This is the family I have!” 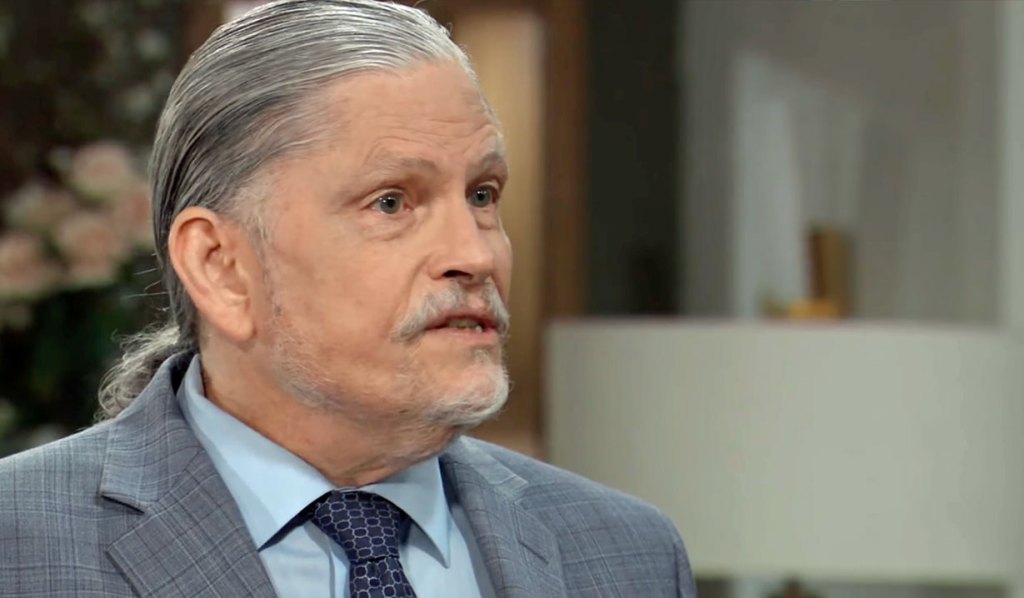 A visibly shaken Laura runs behind Nikolas. Cyrus suggests Nikolas think his offer over, but not to take long. After Cyrus departs, Laura asks if her son is considering this deal. She warns him not to act out of fear or give in to Cyrus. Angry, Nikolas can’t have something happening to Alexis on his conscience. He storms out. 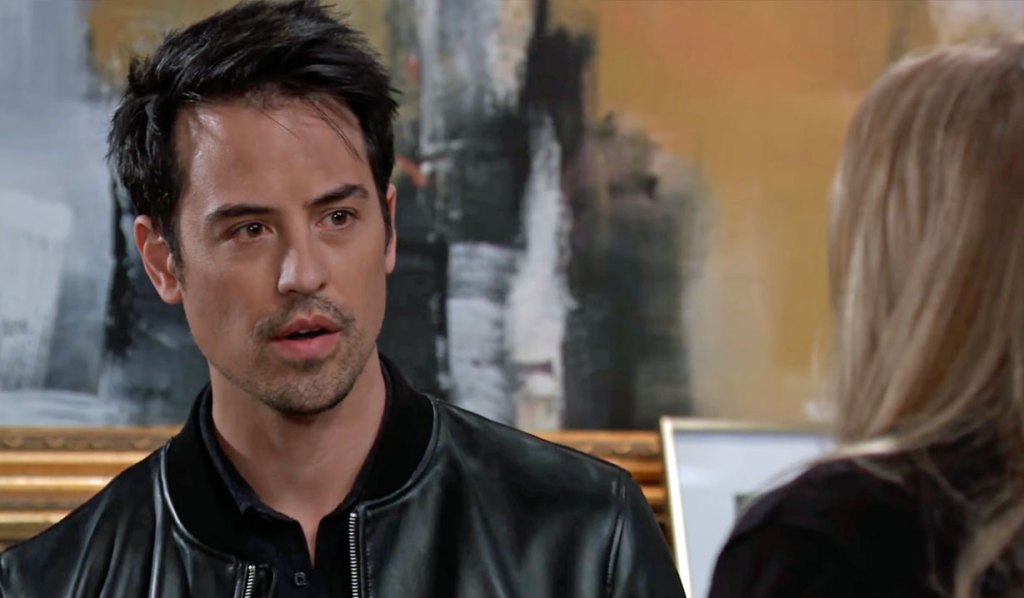 At Ava’s gallery, she screams when she opens a package to find a dummy hand inside, which she drops to the floor. Kevin pulls a note from the box that reads, “An offering for my goddess, may you always feel my hand in yours. Forever… R.” Ava suspects Ryan sent it, but Kevin isn’t so sure. Chase arrives to investigate, and Kevin notes that Ryan is unable to move except for blinking, so he likely didn’t do this without help. 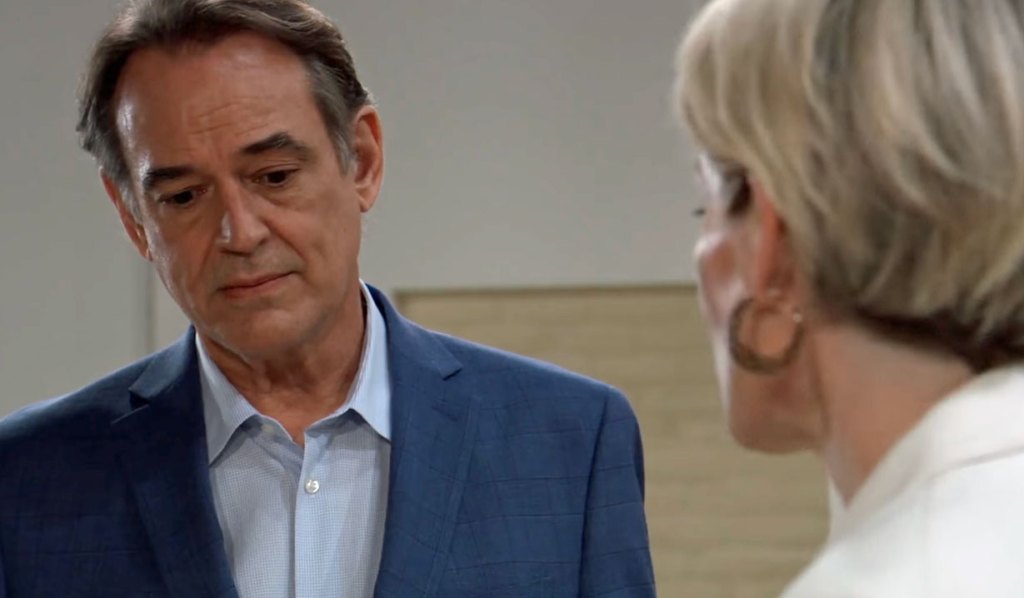 Chase plans to stop by and check on Ryan, and question his caretakers. Kevin suggests Ava consider any other enemies she and Nikolas have that could have done this. Chase departs, and Kevin offers to see Ava safely to the launch back to Wyndemere. She thanks Kevin for his concern but is expecting Nikolas soon, and she never goes anywhere without protection. She shows him the gun she carries in her purse. 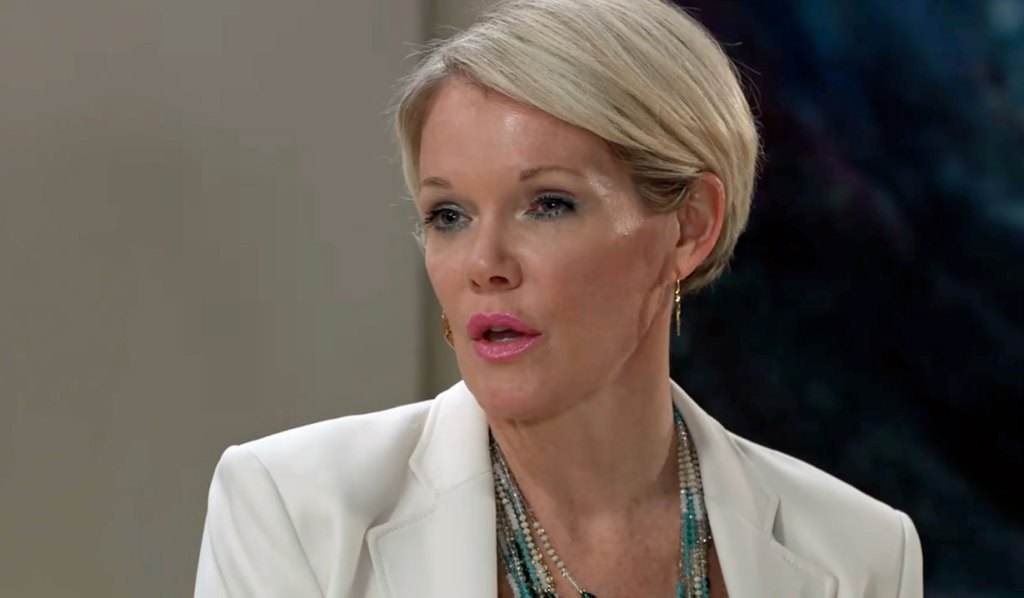 Sam stops by Alexis’ place to check on her mother. They sit down, and Alexis goes over some legal papers with Sam, who is taking over her power of attorney. There is a knock at the door and it’s a consultant that Diane arranged for her to help Alexis prepare for prison. The woman introduces herself as Irene. They go over her legal documents to get everything in order, and Irene suggests Alexis take a few boxing and self-defense lessons to learn how to protect herself. As Alexis makes her normal dry comments, Irene advises she drop the sense of humor because it could make her enemies inside. The consultant steps out for a break, and Sam wishes she had fought more to push her mom not to plead guilty. 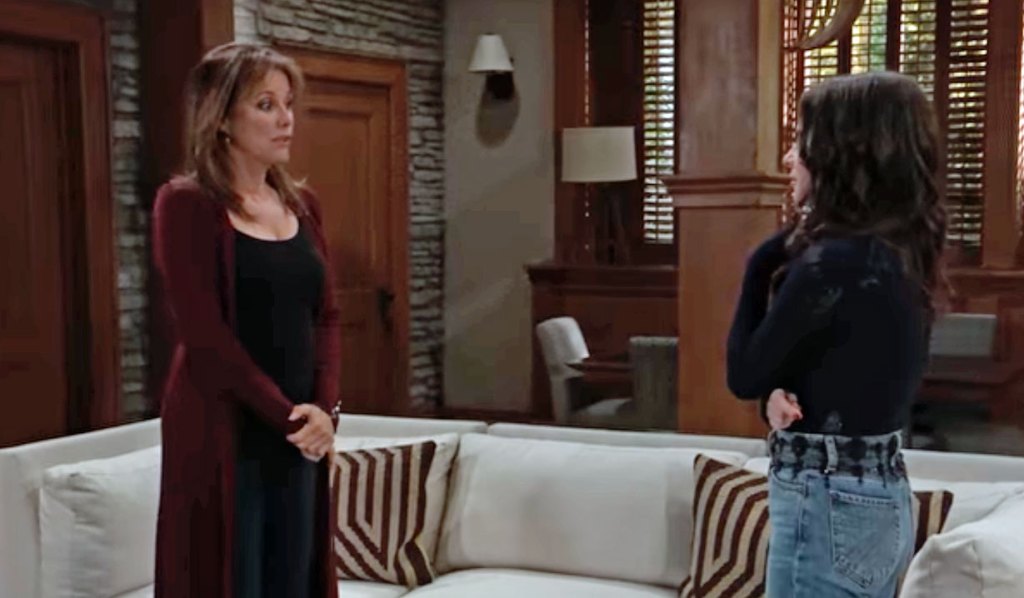 Alexis steps out and asks Irene how she got into this line of work. Irene explains she shot her abusive husband, who survived, and she was sent to prison for it. She found she had a knack for helping women on the inside and advises Alexis to find a purpose of her own while in prison because three years is a long time to do nothing. Irene says she’ll return tomorrow, but right now she and her daughter need time together. 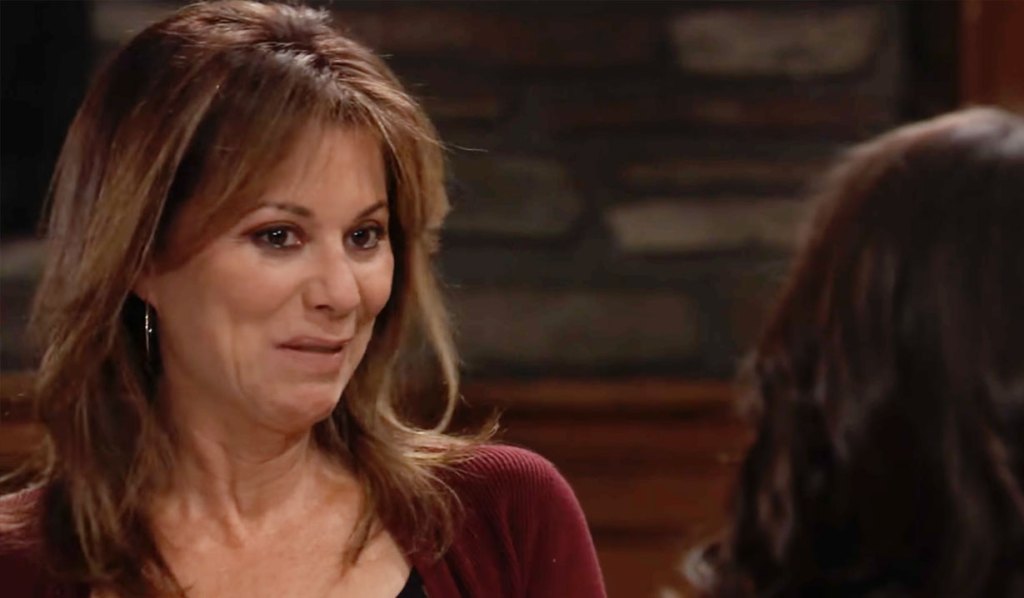 Alexis goes back inside and tells Sam that she needs her to promise she’ll be okay while she is in prison. She won’t be able to help or protect Sam if she gets in. Sam promises her that she and her sisters will be okay. They embrace.

Back at the Metro Court, Cyrus overhears Carly on the phone asking Diane to find a way to get her in to see Jason. He offers his help, but she refuses it. He reminds her that as soon as his mother is returned, Jason could be sent home to her.

In the Quartermaine foyer, Valentin shows up to check on Brook Lynn and discuss the private security detail he hired for her and the baby. Brook Lynn says she is capable of taking care of herself. She goes to find her phone to call her dad, only to trip and fall face down. Valentin and Willow rush to her aid, and Valentin demands he take her to the hospital to be checked out. He asks Willow to have his car pulled around. 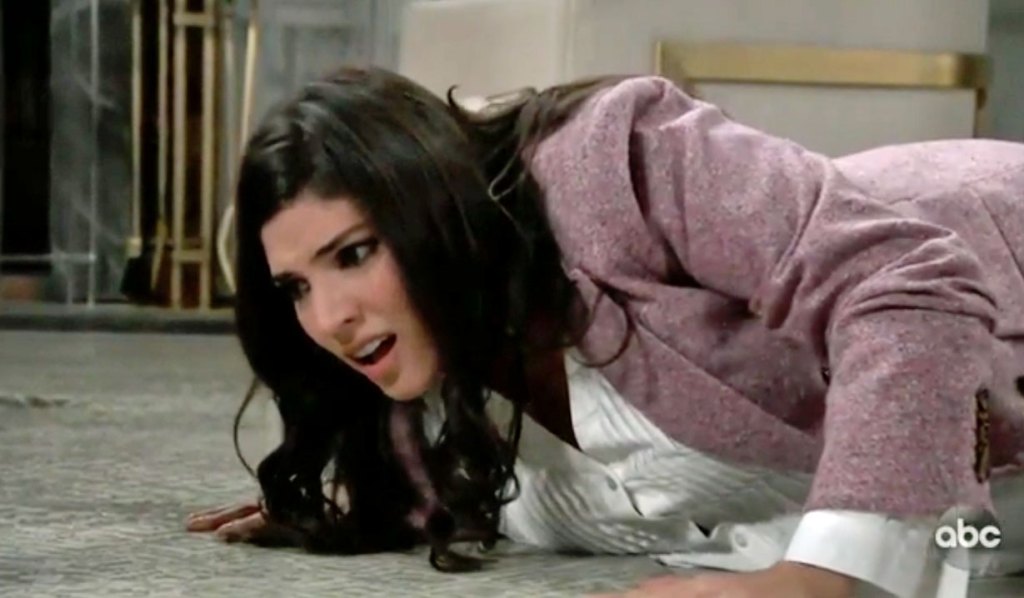 Back in the den, Sasha tells Michael that they don’t exactly spend time together or take the opportunity to do so. Michael wonders if they’ve been waiting for their old feelings to come back, or maybe they’re gone. Michael can’t believe two people who know each other so well can’t know when they need to break up. Sasha doesn’t know how to say goodbye to him. Michael tells her that he’ll always be thankful to her, because even though she lied about her relationship with Chase, it is because of her that he has his son. They share a parting hug as tears stream down Sasha’s cheeks.

Kevin returns home, and Laura brings him up to speed on Cyrus’ threats. He tells her about the gift Ava got and that someone is messing with her head. Laura fears that this is the beginning of something terrible.

Nikolas arrives at the gallery and warns Ava that they are in trouble. She knows they are. Nikolas begins to inform her what is going on with his Aunt Alexis.

On the next General Hospital: Brook Lynn is taken to the hospital where she’s forced to make an admission, and Britt tells Maxie, who is also checked in, that it’s time to put their plan into motion.

Get your free daily soap-opera fix for General Hospital — and all of the other daytime dramas — delivered straight to your email inbox by signing up for Soaps.com’s newsletter. And don’t miss our gallery of soap stars we’ve lost in 2021.

As Olivia Learns of Ned's Scheme,...

Nikolas and Cyrus Strike a Deal —...