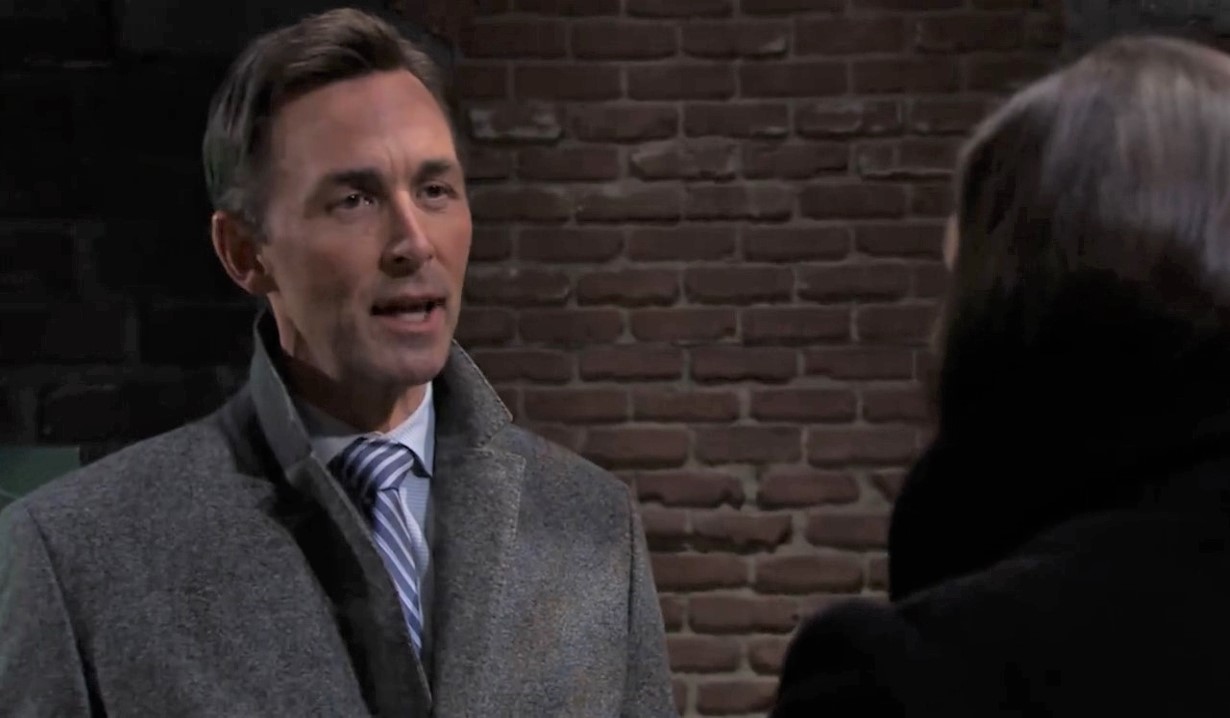 Outside of Kelly’s, Valentin has hardly turned away from Nina when he bumps into Brook Lynn. He starts doling out compliments and suggests she’d make a great manager. When she reveals that she’s very pregnant, he laughs. She admits their one-night stand was more memorable than they’d expected. He’s shocked but wants to take responsibility and says she shouldn’t go through this herself. Brook Lynn insists any role he will have will be on her terms and pushes past him. He immediately calls his lawyer. 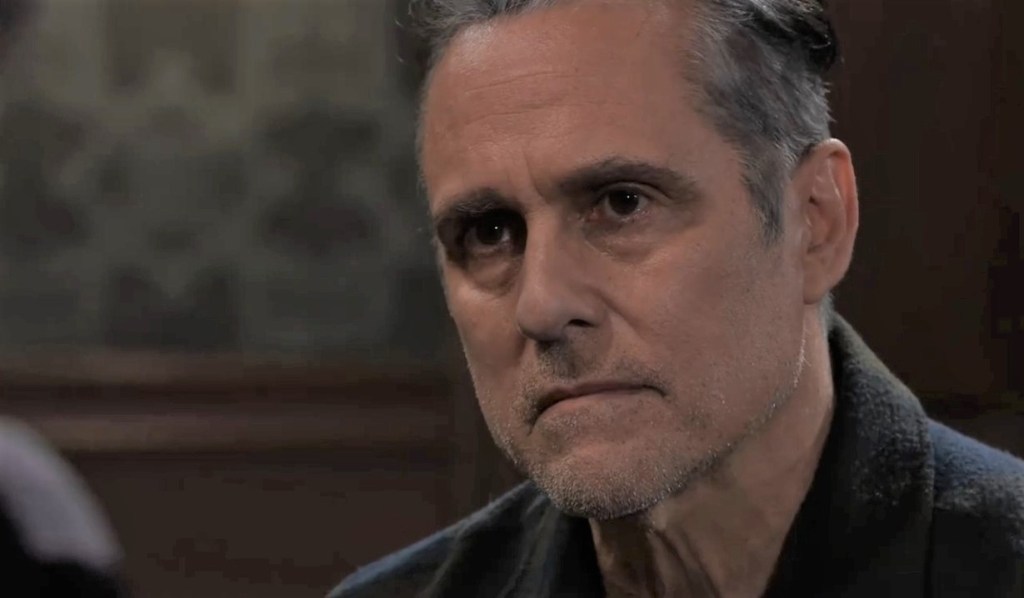 Sonny returns to the Tan-O and Phyllis asks where he disappeared to. He assures her he didn’t get into any trouble. He was just playing poker to try and buy his rings back. She says he can’t lose those rings when they are the only thing connecting him to his past. Phyllis admits that she and Lenny had a baby girl, but she only lived a few days. They wanted another child but were afraid. She asks if he thinks he has children somewhere. He doesn’t want to think about it. When he leaves for a nap, Nina shows up. 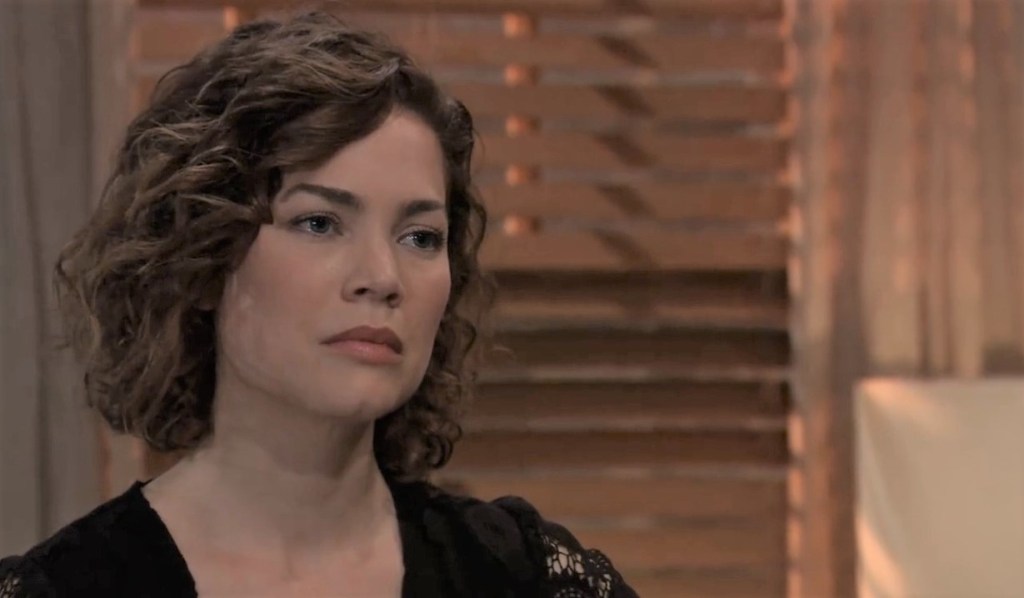 Carly shows up at Liz’s place. The nurse isn’t happy to see her but Carly barges in and announces Jason has been arrested. Liz doesn’t want to argue but they do as Carly questions her certainty of Jason’s guilt. She keeps poking holes in Liz’s story and says Jason would never do anything to hurt her and the boys. Carly insists that it’s all a set-up and she’s helping someone get away with killing Franco. 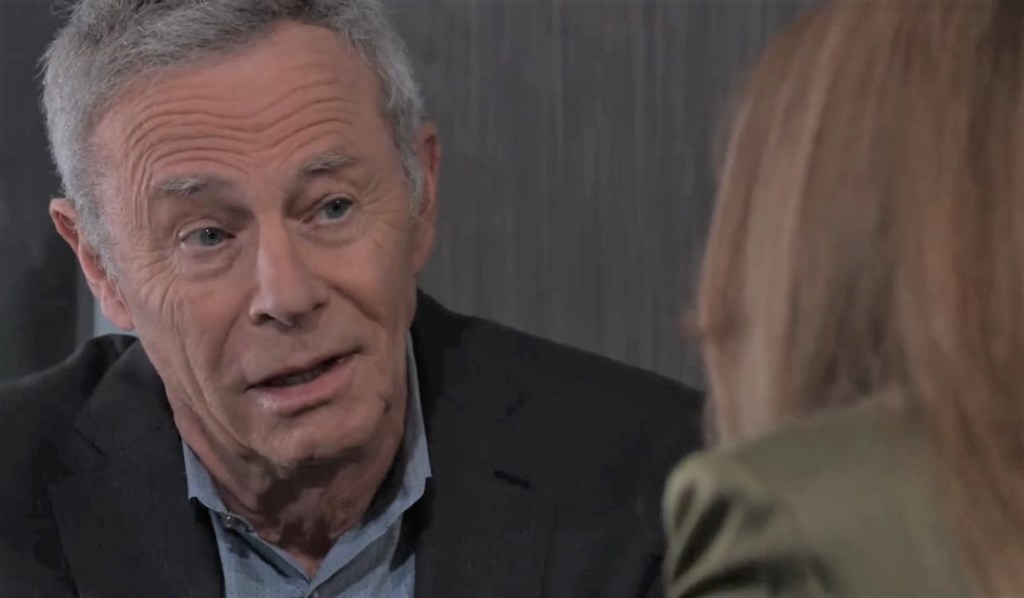 Cyrus sits down with Jackie at the Metro Court. She tells him to get lost and Robert asks him to get out of his seat. After Renault leaves, Robert checks in on Jackie about her situation. He’s sorry she went through all that alone. He feels closer to her now than he ever has. She feels bad for ruining Gregory’s life. Scorpio admits he’s always been a lousy partner but a good friend. Her phone buzzes. The Invader article about Chase’s paternity pops up. 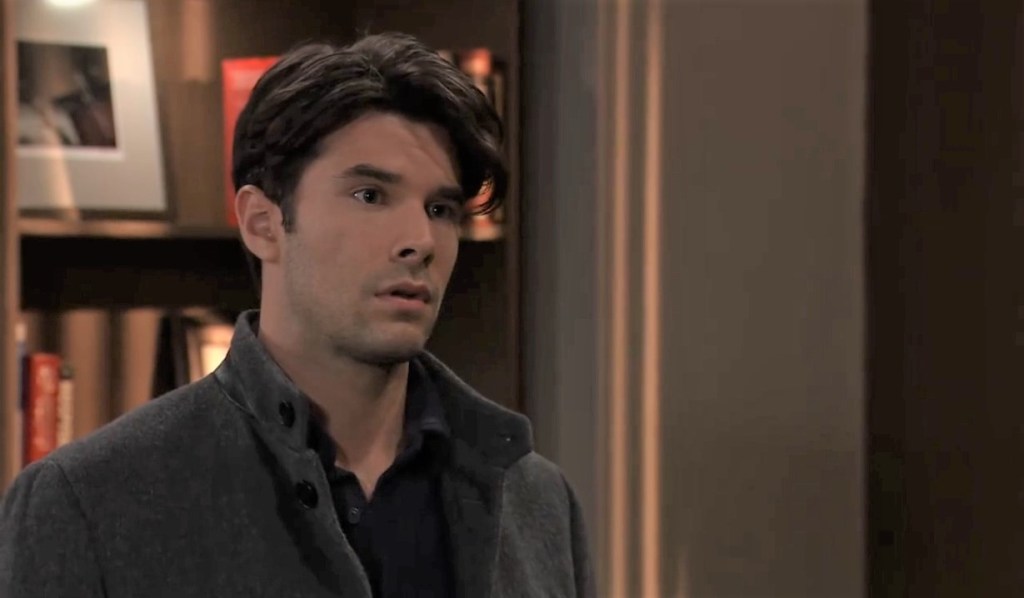 Chase drops by Finn’s office at General Hospital and apologizes for storming off when the DNA results came in. Finn assures him he has nothing to apologize for. The doctor says that test results at GH aren’t always reliable, so he’d like to run the test again somewhere else. He suggests that this doesn’t have to change their relationship, but Chase insists it’s already different. They both get a text about the paternity article. Jackie bursts in and starts apologizing. Chase isn’t forgiving and walks out. Finn says they need to give him time. 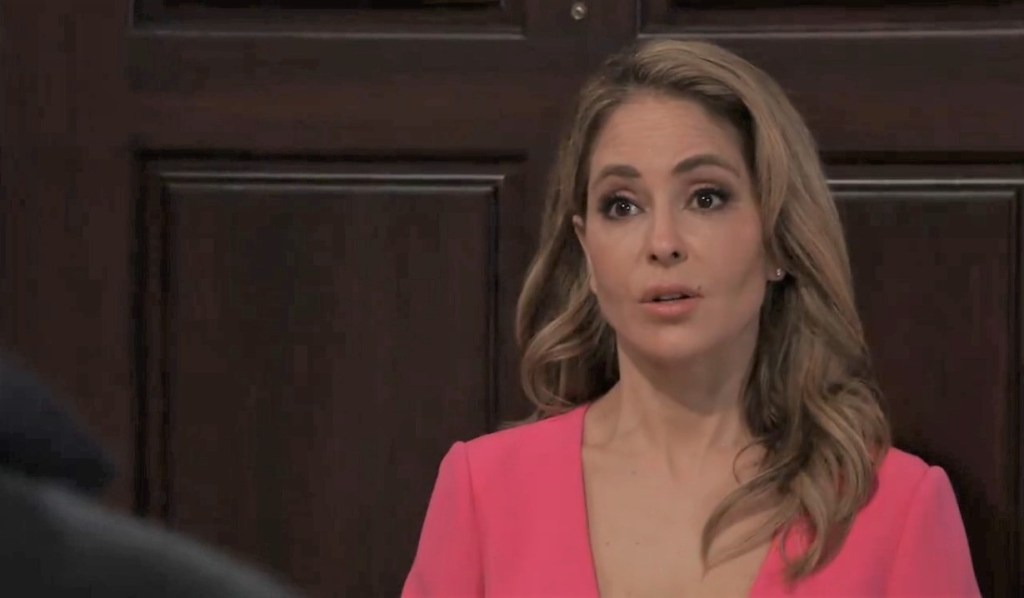 Olivia drops in on Ned at the Quartermaine house. They need to talk about his daughter. She’s back with news but Olivia can’t say more. Ned wants to talk about them. Liv says they have changed, and she’s been surprised to see the business become his prime focus. When she thought Dante was dead, she was crushed but it also allowed her to see herself as an independent risk-taker again. He says that she was a brilliant first lady and he feels like he was holding her back. Brook Lynn bursts in and tells him he’s going to be a grandpa. Olivia escapes. The Quartermaines apologize to each other. She rambles through the men it might have been before finally admitting Valentin is the father. Ned is not thrilled. His daughter assures him she knows what she’s doing.

More: Could a new soap take The Talk’s slot? 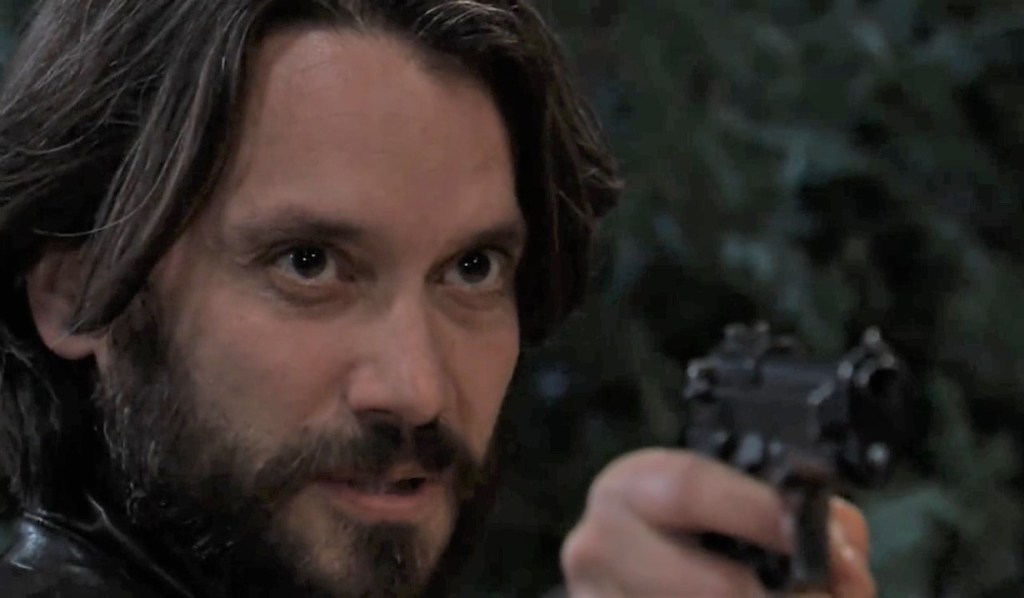 Dante meets Peter in the cemetery after texting him using Maxie’s phone. He levels his gun at August. Peter starts to beg and trips over a gravestone. Sam rushes up to stop this. She begs him not to throw his life away because of Peter. As he thinks about Rocco, he lets go of his gun. Peter complains, threatens, and runs away. Dante tells Sam that what just happened was like he was outside himself. He thought he had recovered but he needs some help. Sam takes his hand.

Olivia chats with Robert at the Metro Court. Ned wants to move forward but she’s stuck. She thanks him for seeing her for who she is.

Cyrus meets Peter in a corner and promises that his witness will come through for him. Peter says he’s just lucky that Jackie’s family had a scandal to expose. Renault thinks back to placing a call to make sure the DNA tests had the results he wanted.

On the next General Hospital: Olivia rushes to the hospital.

Get your free daily soap-opera fix for General Hospital — and all of the other daytime dramas — delivered straight to your email inbox by signing up for Soaps.com’s newsletter. And don’t miss our gallery of who might kill Peter. 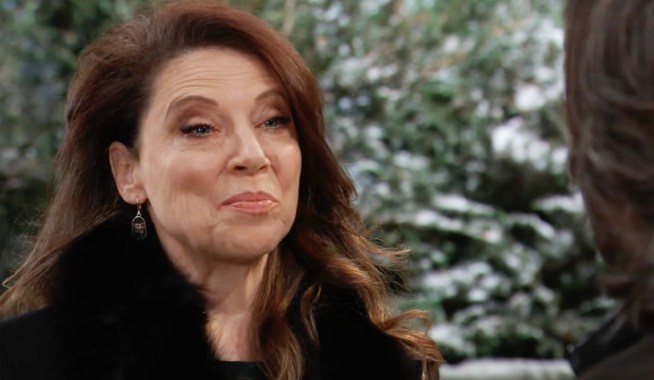 After Sonny Once Again Dreams of a Blonde Woman, He and Nina Come Face to Face 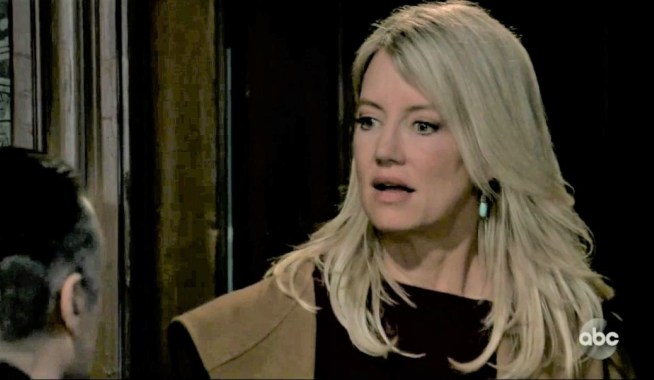