Monday, January 18, 2021: Today on General Hospital, Ava finds a way to get Avery's necklace back, Michael and Willow reach a decision about their marriage, and Olivia confronts Tracy. 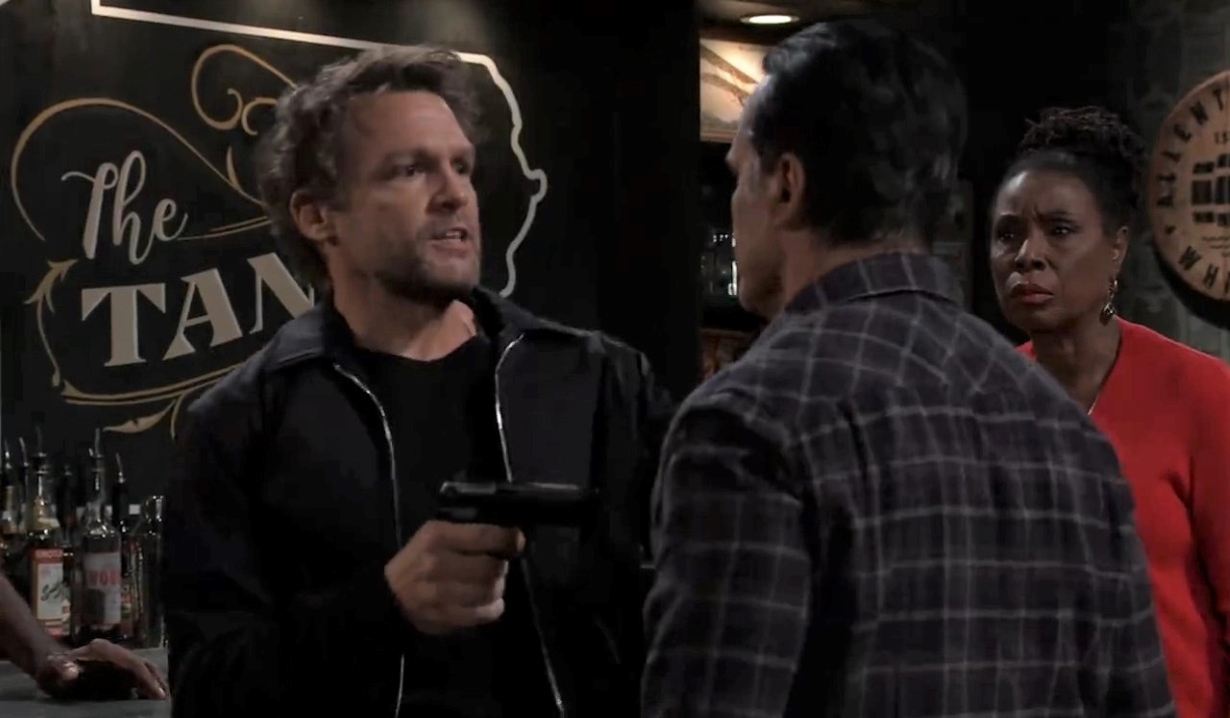 At Tan-o’s pub in New Jersey, Sonny yells at a man with a gun to stop robbing Phyllis and Lenny. He won’t, so Sonny clobbers him and grabs his gun, ordering him to apologize. After the guy runs off, Lenny is shocked by how unintimated Sonny was. They thank him and ask what’s next. He shrugs. Phyllis offers him the spare room upstairs and says he can help at the bar. Sonny thanks them and heads upstairs. He returns and listens at a distance as Lenny and Phyllis debate letting him stay there. Interrupting, he offers to leave but she insists he stay. 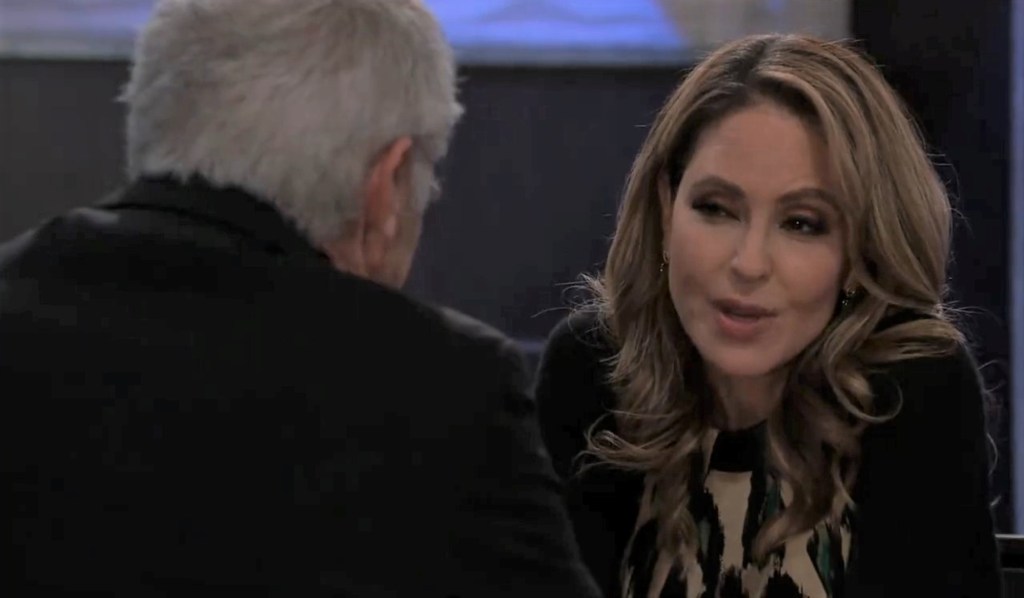 Olivia joins Robert at the Metro Court and asks him to teach her to be a spy. He assumes she’s gotten herself into trouble. She just wants to help Alexis and informs him of her suspicions about Tracy. 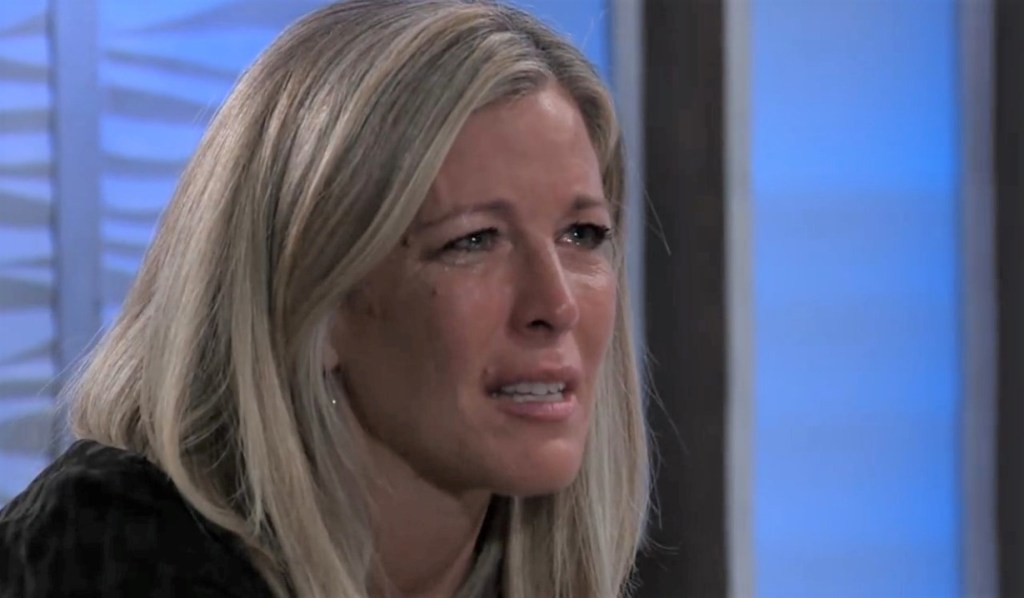 At the bar, Jax catches Carly sobbing. She doesn’t know how to grieve for Sonny. He hasn’t even been declared dead yet. Jax tells her to take her time. She can’t shake the feeling that what happened to Sonny was karma for what happened to Nelle. He assures her that this was not punishment for keeping the truth from Nina. Jax says it’s too late for the truth, even if that makes him feel he’s as bad as Valentin. Carly assures him that love isn’t necessarily about honesty. 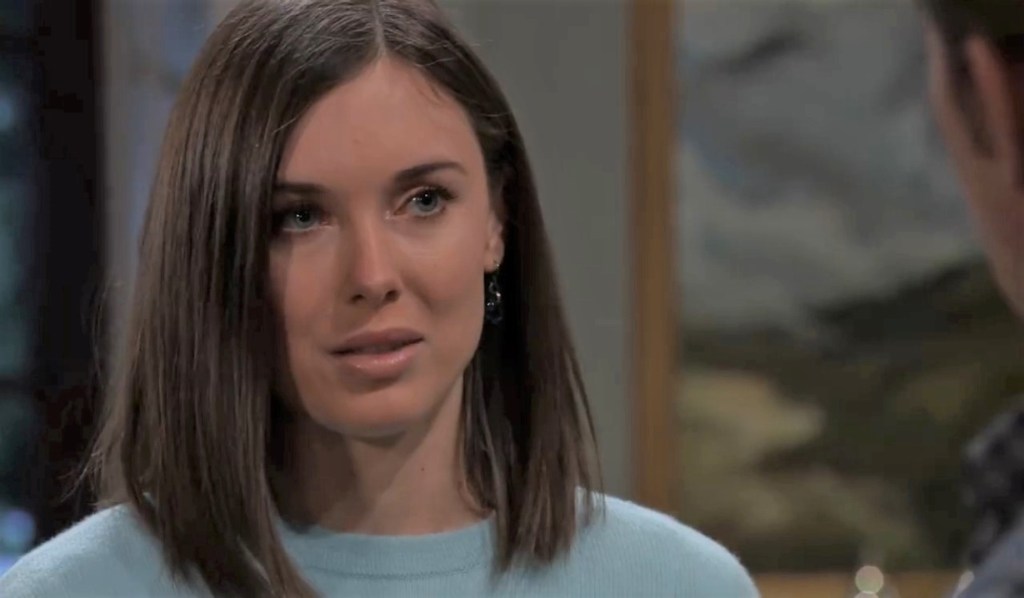 At the Quartermaine estate, Michael and Willow decide it’s time to figure out what they mean to each other. He confronts her about kissing Chase. She’s apologetic but he tells her not to be. They admit they have feelings for other people, but she knows that doesn’t mean they don’t have feelings for each other too. He wonders if they would have been more-than-friends if the circumstances had been different. She thinks everyone deserves to try and get back the love they had… unless that’s not what he wants. Neither of them regrets what has happened and agree to sign the annulment papers. 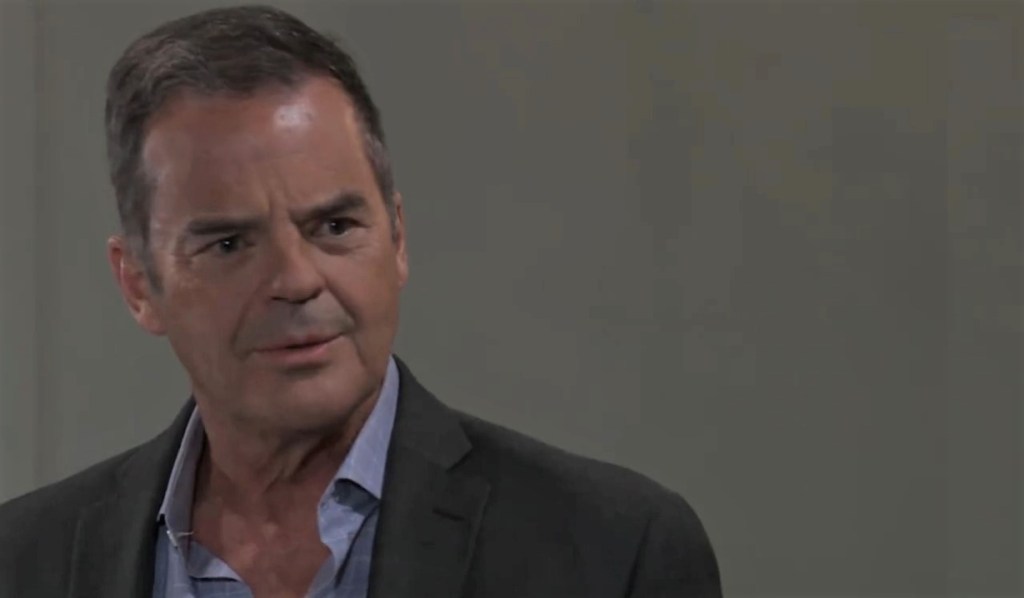 In the foyer, Tracy and Ned discuss the situation with Olivia and Alexis. Olivia walks in and Ned heads upstairs to check on Leo. Tracy tells Liv that she will always protect Leo from anyone who gets in the family’s way. Liv thinks about Robert telling her to set up her mark with flattery, so she starts flattering Tracy’s fashion sense. When that fails, she asks Tracy to be a witness for the adoption. Sensing this has let down Tracy’s defenses, she quizzes her about driving Alexis home. Ned returns and tells them that Leo is delighted to be adopted into the family. When he wanders off again, Olivia asks flatly what happened the night Alexis drove off the road. 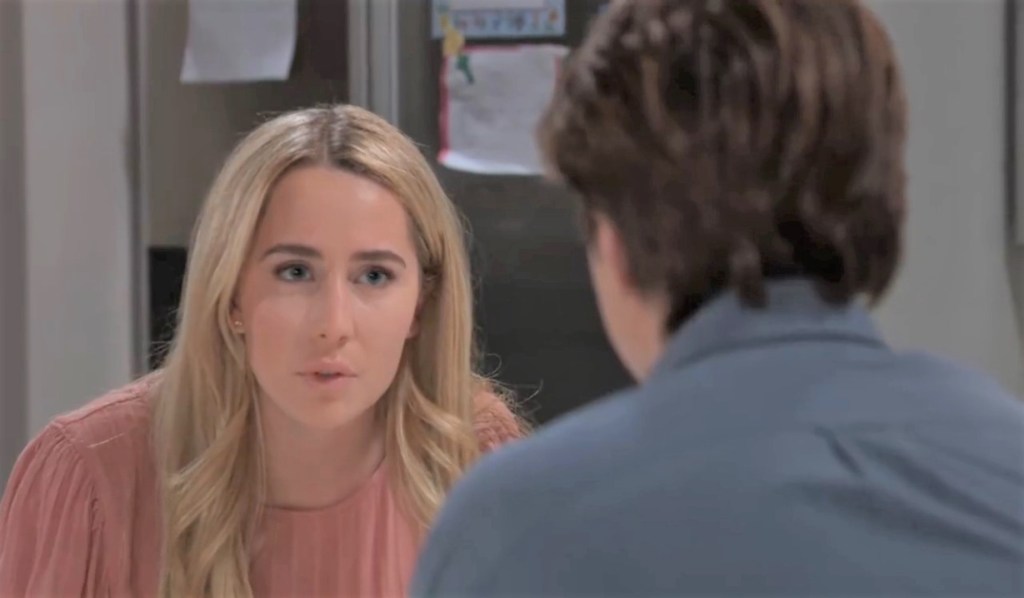 In the Corinthos kitchen, things are awkward between Trina, Cam, and Joss as they return from a school assembly. Joss admits she’s feeling overwhelmed by how many people are gone from her life. She thinks it might be time to get her journal out again. Cam is startled by this because he thought she threw it away. When she goes to get it, she quickly returns, panting that it has gone missing. 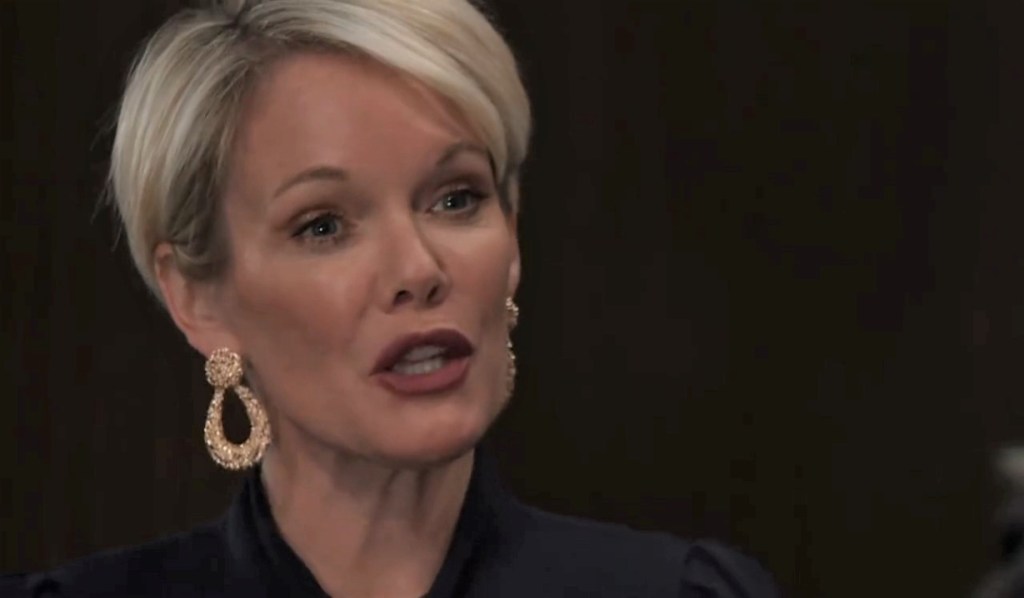 In her office at Crimson, Nina is rooting around in her jewelry box when Ava interrupts. She tells her about Avery’s necklace and butting heads with Carly over the little girl. She doesn’t want her daughter to end up in the middle of a fight, so she asks Nina to get her to back off with some help from Jax. Nina thinks that would make things worse.

The topic turns to Phyllis and the missing child. Nina is sure her daughter is living a purposeful life now. Ava suggests that dropping the search has more to do with what Jax wants. Bragging about how wonderful Jax is, Nina says this was all her choice. When Nina goes on about what a great peacemaker Joss is, Ava gets an idea. When left alone, Nina puts on the half-heart necklace. Jax interrupts and she shows him her old varsity letter. She’d like to give it to Joss, but then backs it up. He assures her that he loves her and his family is her family.

Ava drops by the Corinthos house and tells Joss that she will always make sure she has time with Avery. She asks her about the necklace and tells her how eager Avery is to get it back. Joss goes and checks her mom’s jewelry box. When she returns, she tells Ava that she is doing this for Avery, not her. Whenever she sees Ava, she thinks of what she did to Morgan.

Trina and Cam go to Perks. He admits that Joss’ diary was stolen by Dev. They worry this could ruin her memory of the dead boy. Trina says Joss will likely forget this, but if she doesn’t, they’ll just tell her the truth.

On the next General Hospital: Jason warns Britt to be careful around Cyrus.

Get your free daily soap-opera fix for General Hospital — and all of the other daytime dramas — delivered straight to your email inbox by signing up for Soaps.com’s newsletter. And don’t miss our gallery celebrating the run of Santa Barbara. 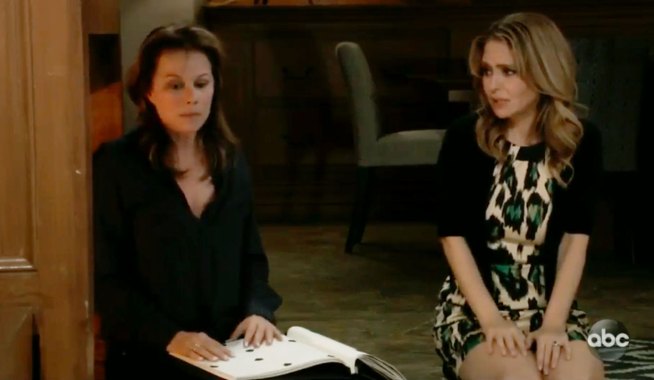 Olivia Comes to a Devastating Realization After Tracy’s Startling Admission 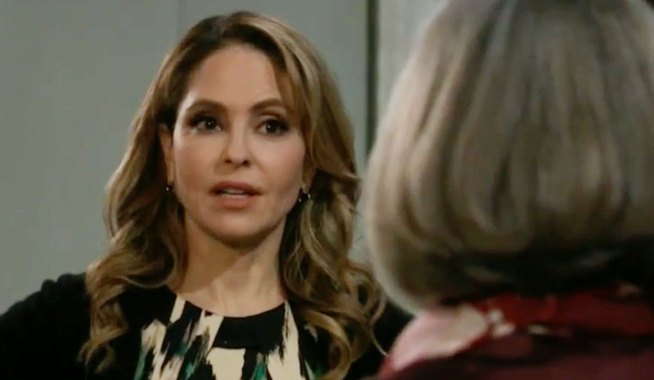