Monday, November 30, 2020: Today on General Hospital, Sonny learns Julian planted the bomb, the Quartermaines have another unconventional Thanksgiving, and Sam struggles with the dangers of Jason's life. 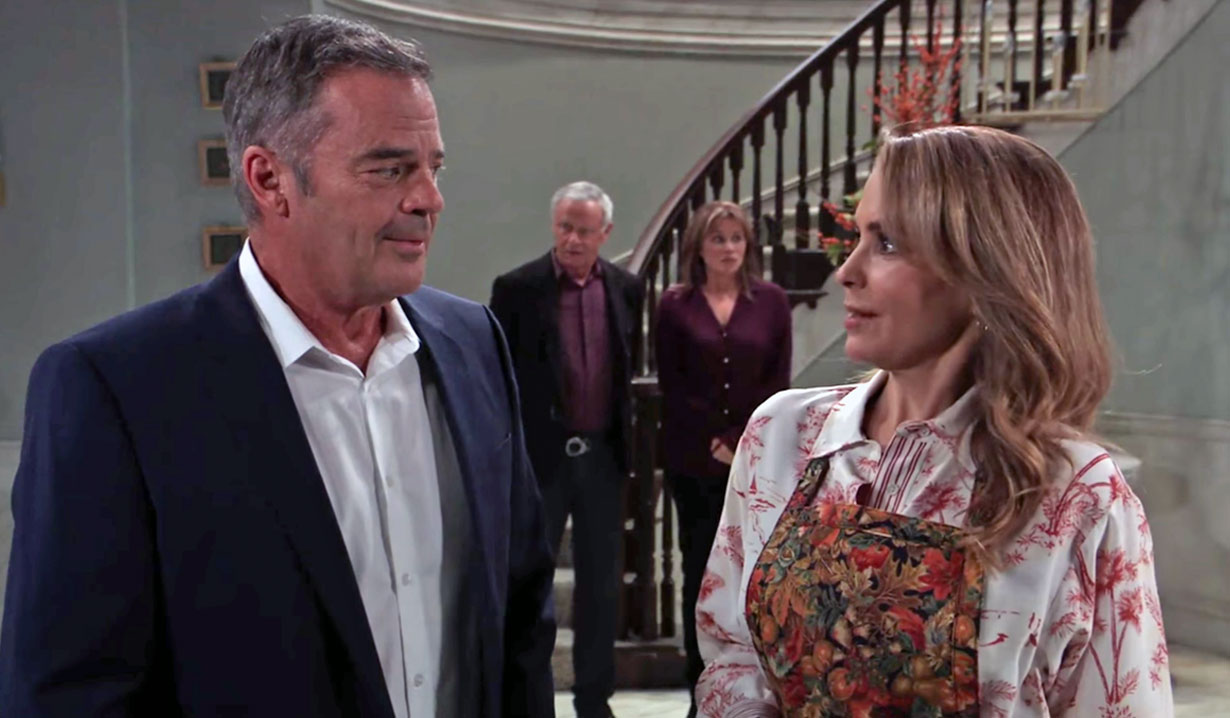 At Sonny’s place, Sonny and Jason speak out on the patio. Inside, Sam begs her mom to stay and spend Thanksgiving with them, but Alexis refuses. Alexis thinks the safest place to be right now is away from Sonny and Jason and suggests her daughter stop putting being loyal to Jason above being a responsible parent. Alexis leaves, and Jason and Sonny enter. They all wonder how Cyrus knew that Jason would be at The Rib with Danny. Carly suspects the new bartender they hired may have overheard Jason’s plans and tipped Cyrus off, so Sonny and Jason leave to question him. Alone, Sam confesses to Carly that this explosion has her afraid for the future and the next time. Carly tells Sam she knew who Jason was when she chose him, and fear is a part of the deal. Sam isn’t sure she can live with it anymore now that it’s involving her children. Carly understands, but the danger comes with the territory. Sam reveals that’s why she can’t sleep at night. 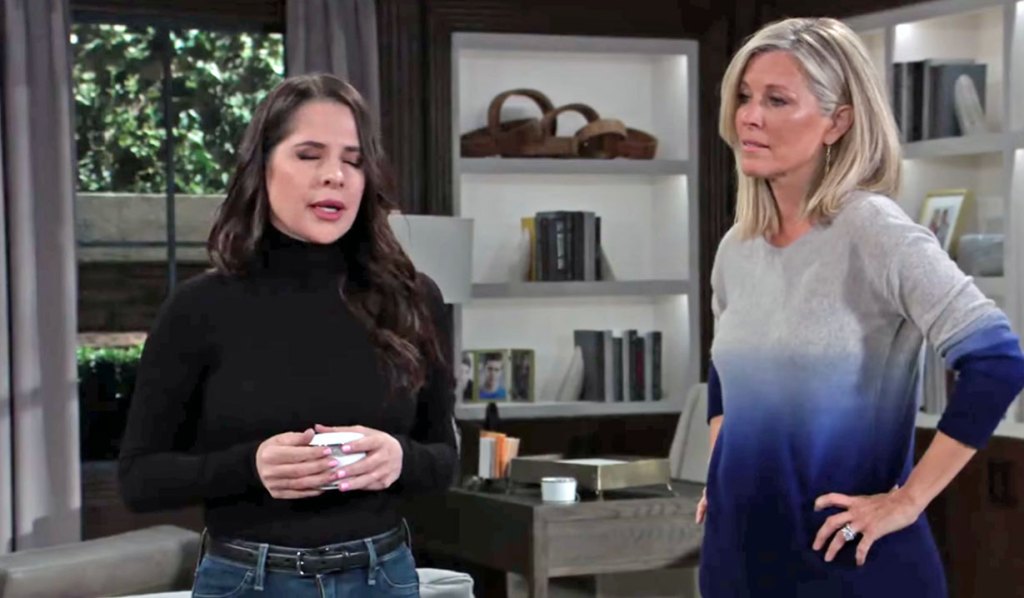 More: Is GH setting up a Drew return?

At the Quartermaine mansion, Michael and Willow discuss Sasha and Chase’s fake affair. In the foyer, Olivia is delighted that Cook III has given her the run of the kitchen. Monica and Ned warn her that given what is going on it’s fine if she cancels dinner, but Olivia insists on making this day normal for Rocco. Alexis and Robert both arrive having been invited by Olivia, who has decided to play matchmaker between them. Later in the living room, Ned worries to Alexis about Olivia picking up on the weirdness between them. As they talk, they are unaware Robert is lurking. Robert enters, and Alexis excuses herself to get a refill. Robert warns Ned whatever is going on that he better not hurt Olivia. Suddenly Olivia screams and everyone goes running to her. The turkey is ruined due to her setting the oven at the wrong temperature. Ned tells her it will be fine, and Monica reminds her this family hasn’t had turkey since the nineties. Monica believes they all know where they should be today. 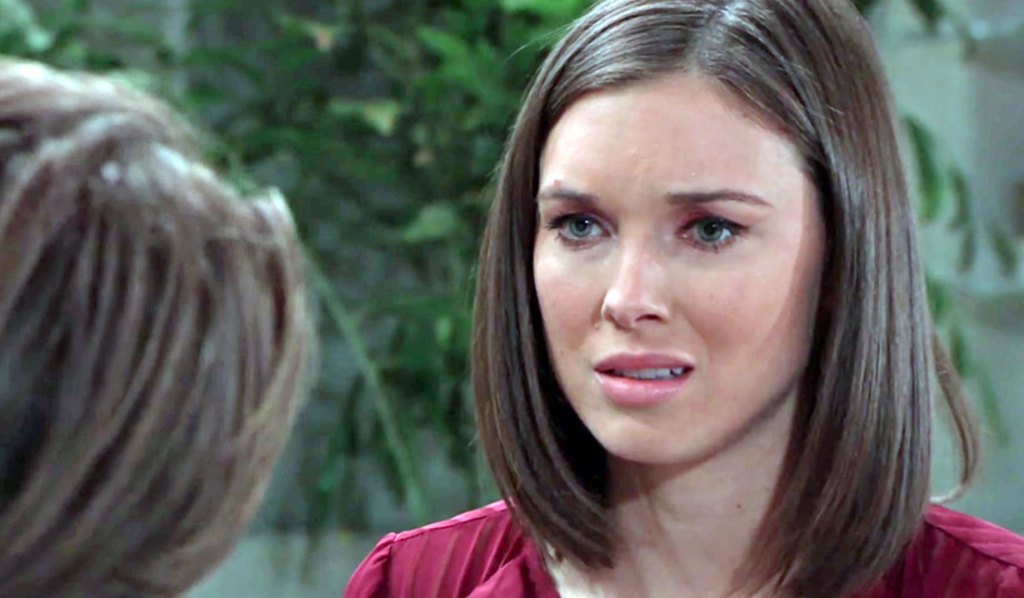 More: Is this how it ends for Julian?

At General Hospital, Sasha wakes up to find Epiphany by her side. The nurse tells her it’s Thanksgiving, and she is in the hospital after having a heart attack due to an overdose. Sasha is also told that Michael sat with her all night. Later, Brando stops in to see Sasha and check on her. She tries to claim she’s fine, but Brando knows the signs of an addict as he’s one. In the hallway, Laura talks to Tracy over the phone. The Quartermaine promises to make sure Lulu gets the best care possible. Tracy is at an airport and is headed to Amsterdam to try and find Luke and tell him about Lulu. After the call, Laura talks with Nikolas about his sister. Both Patrick and Griffin have been consulted and agree with Lucas’ diagnosis. In Lulu’s room, Dante sits by her side and tearfully begs her to wake up. Laura joins Dante, and she explains that General Hospital may not be the right place for Lulu right now. Dante thinks Laura is giving up on her daughter and sending her away. 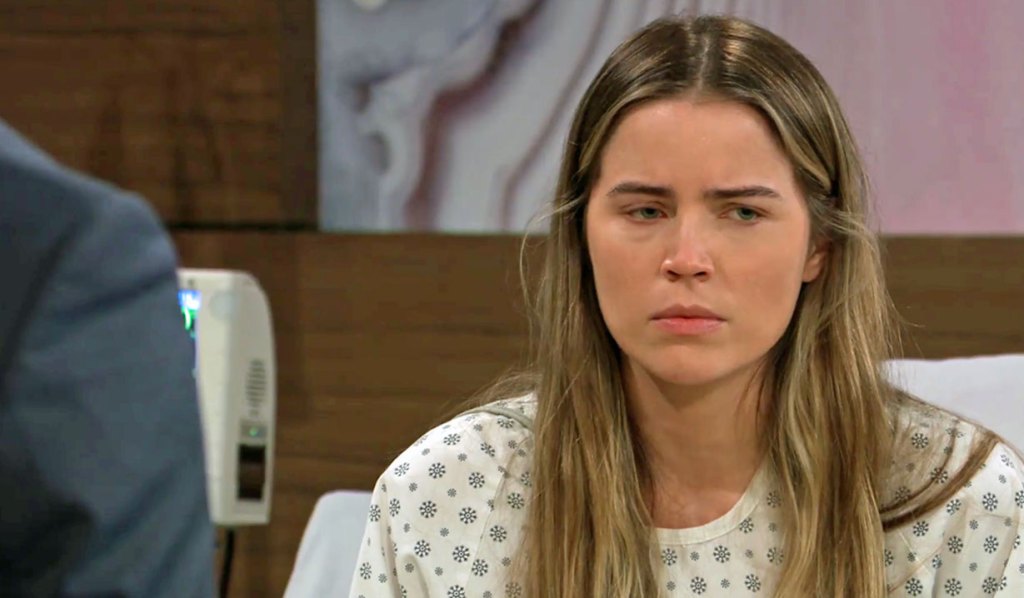 At Wyndemere, Julian packs a bag as Ava tells him that she’s instructed the staff to stay out of this wing. Ava has to check in with her husband about his sister, who Julian put in the hospital, and tells her brother that she wants him gone by dawn. 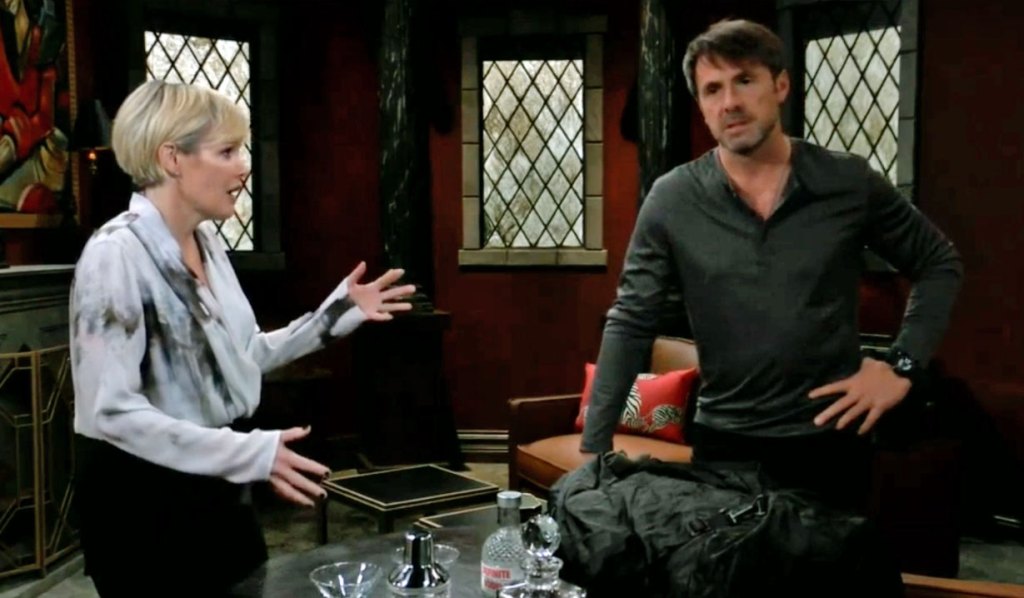 Ava joins Nikolas at General Hospital and learns that they don’t know if Lulu will ever wake up. She’s visibly shook as he fills her in on all the people who were also at The Rib, including Franco and his family. Nikolas realizes he forgot to make arrangements for her brother. She tells him that she’ll take care of him. In Lulu’s room, Laura tells Dante they need to find a long-term care facility for Lulu. Dante is aghast and lashes out. Back in Sasha’s room, Sasha wonders why Brando is trying to help her. He explains she is the only one he can help right now and tells her about the explosion and Dev’s death. She suggests if he wants to help her then escort her in making a few laps around the floor. Back in the hallway, Laura is touched when the Quartermaines arrive for support. Dante talks with Michael about the possibility of sending Lulu to a care facility. Michael knows it’s what best for her, and he speaks from experience. Dante takes a moment to apologize for what he said to Laura earlier, and he knows they have to do what is best for Lulu. As Michael briefly spots Sasha, Monica gathers everyone around for a group prayer. After much hugging and praying, Ned and Olivia appear with boxes of pizza. Michael is ready to eat, but Tracy enters and says, “First we sing then we eat!” 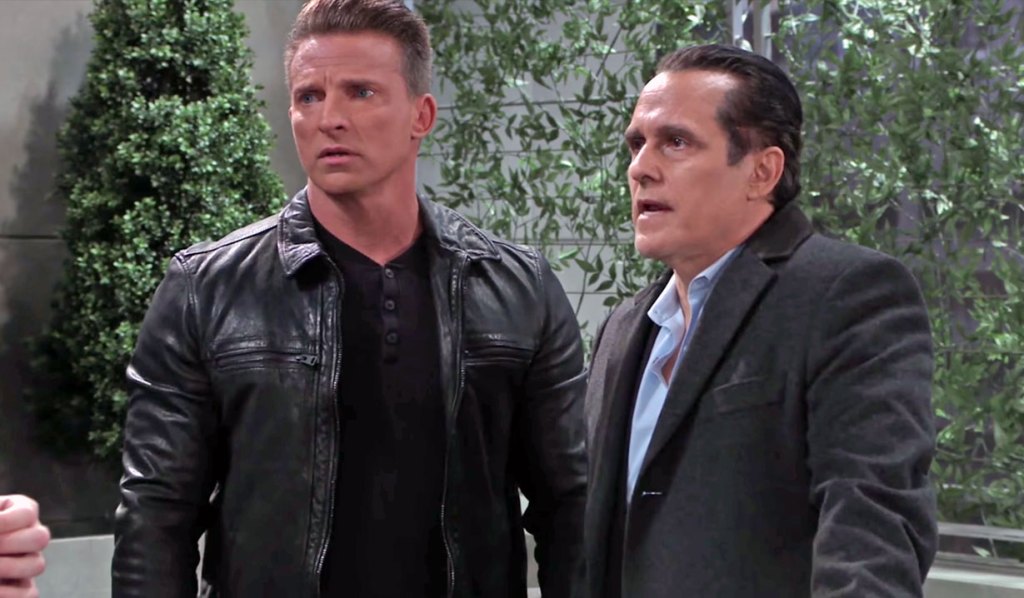 Jason and Sonny arrive at the Metro Court and question the new bartender. After a bit of force applied by Jason, he admits someone paid him to listen and to call some guy to drop off a package at The Rib. The man hands his phone to Sonny, telling him the number is still in it. When Sonny dials it he reaches Julian’s voicemail. 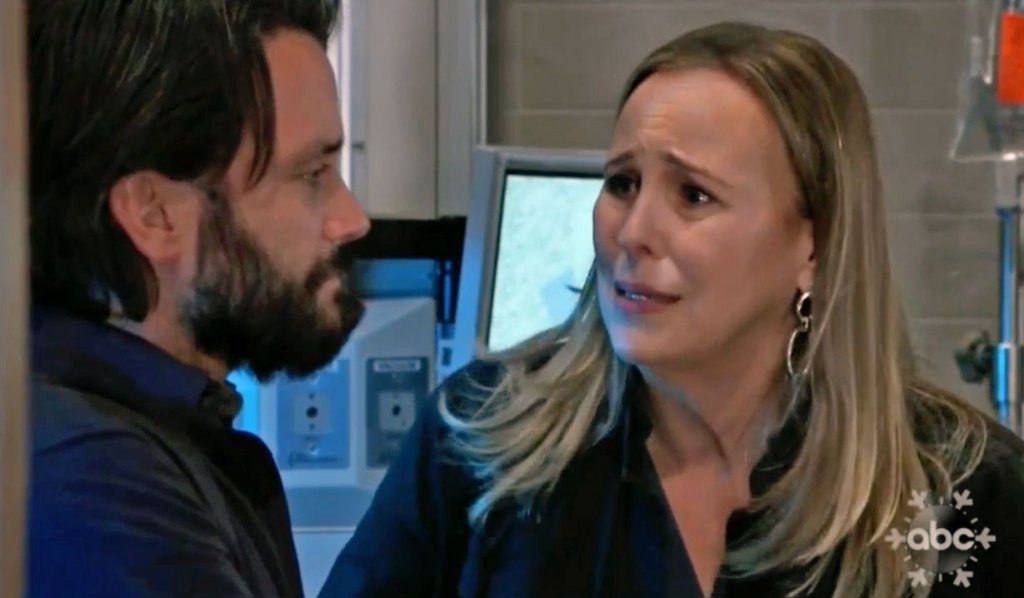 Back at Wyndemere, Ava tells Julian they need to have a chat as she holds a revolver behind her back.

On the next General Hospital: Laura slaps someone across the face and Sonny feels Julian has pushed him too far.

Get your free daily soap-opera fix for General Hospital — and all of the other daytime dramas — delivered straight to your email inbox by signing up for Soaps.com’s newsletter. And be sure to check out our photo gallery of soap characters that crossed over to other shows. 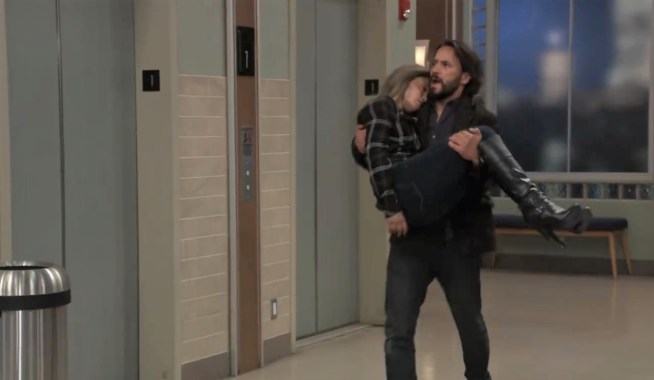 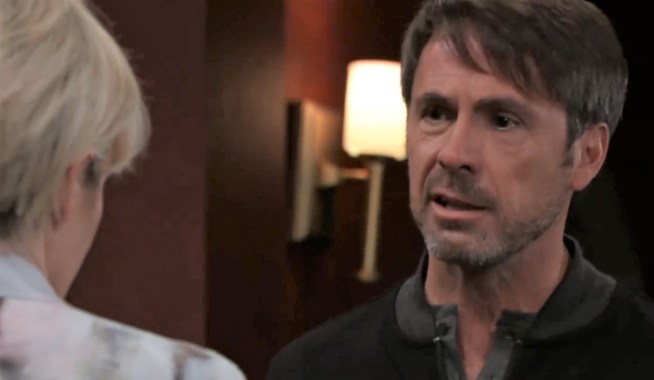