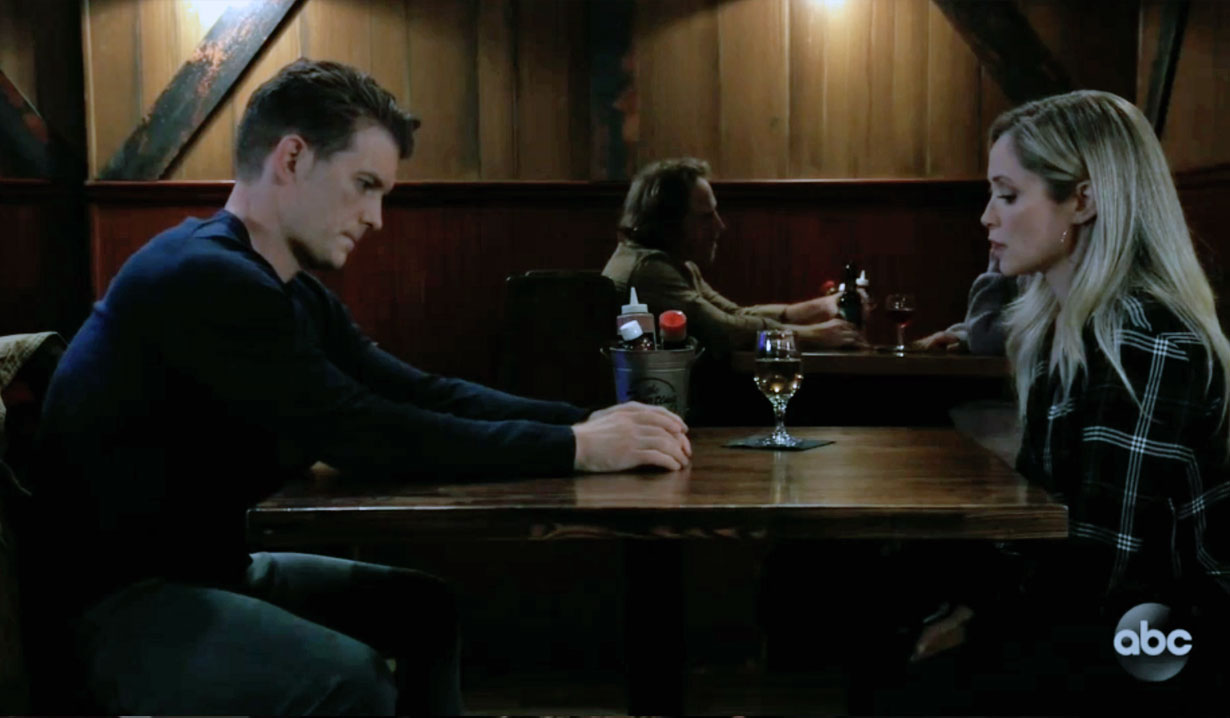 At Sam’s place, she and Molly set the stage for Alexis’ intervention. Molly thinks Kristina should be there, but Sam worries she would derail things. Diane arrives along with Valentin. Sam is displeased, but Diane believes Valentin can get through to Alexis better than any of them.

Sonny finds Dante beating the bag at the gym and confronts his son about the front he’s putting up. Dante opens up about Lulu. He admits he still loves her but doesn’t want to disrupt her life anymore. Sonny says Lulu might still have feelings for him, and he should ask her. 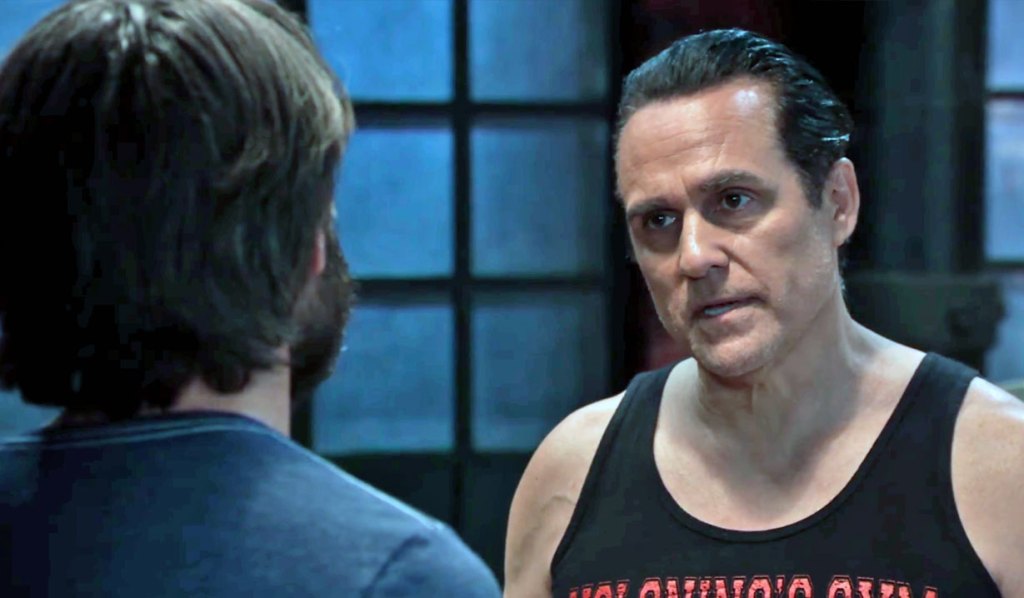 At The Floating Rib, Lulu tells her mother that she never stopped loving Dante, and she feels guilty about also loving Dustin. Lulu admits she doesn’t know what she wants, so Laura suggests she tell Dustin it’s not the right time to move in. Lulu thinks that is a good idea. Laura has to go, and Lulu gives Dustin a call and asks him to meet her. Meanwhile, Cam and Dev hang out, and Dev admits he did something he regrets and needs to make it right. At the pool table, Danny is given lessons on how to play from Jason. Danny brings up his Grandma Alexis, who he knows is drinking again. Jason confirms she has a problem, and they aren’t giving up on her because she’s family. Later, Danny interrupts Dev and Cam just as Dev is about to confess what he did with Joss’ journal. Danny wants to show Cam his skill at pool. Meanwhile, Laura texts Jason to meet, so he asks Cam to watch Danny while he steps out. 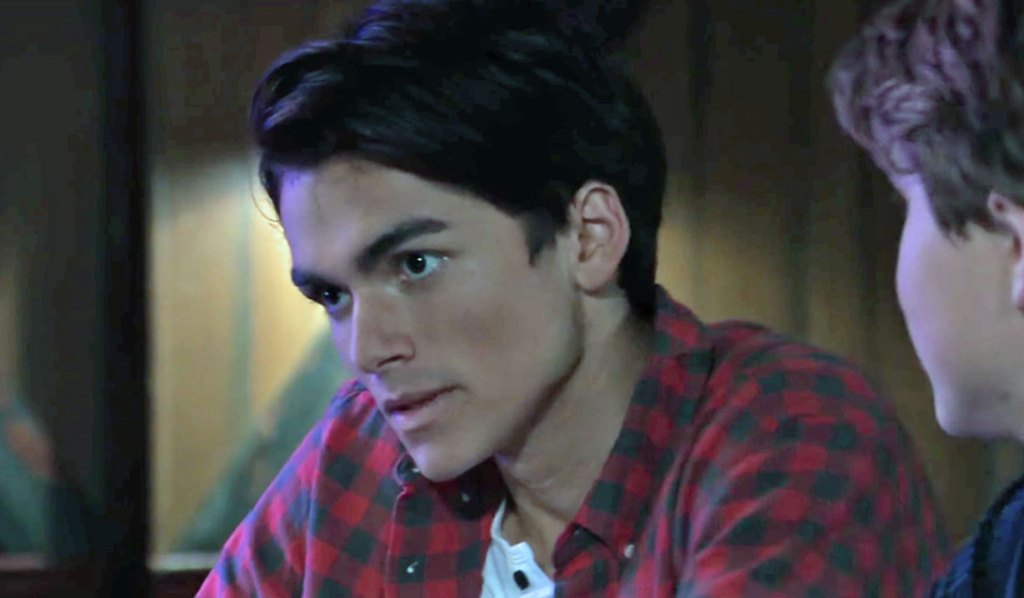 More: What soap fans are thankful for this year

At the hospital, Liz tells Franco even though they didn’t get good news from Terry, the fight is still on. Liz makes an appointment with Patrick to go over his case because he is the best, and they’ll fly out west next week. They decide to head to The Rib to get some dinner.

Julian meets Cyrus on the pier and tells him that he is not blowing up a restaurant full of people. Cyrus explains that the bomb won’t go off until Jason is alone taking a meeting. Cyrus tells him to call him on a burner phone he hands him when it’s done and walks off. A spying Alexis approaches Julian and calls him out on his meeting with Cyrus. Julian claims he once again wanted to buy Charlie’s from him. Julian turns the conversation to Alexis’ drinking, and she tells him that she sees herself as a survivor given what she’s been through these past few years. Julian admits loving her has been the light in the dark for him, and she has pushed him to be a better man. Alexis feels like he’s saying goodbye. Julian assures her that he’s not going anywhere. Alexis heads off to Sam’s place, and Julian grabs the bag with the bomb. 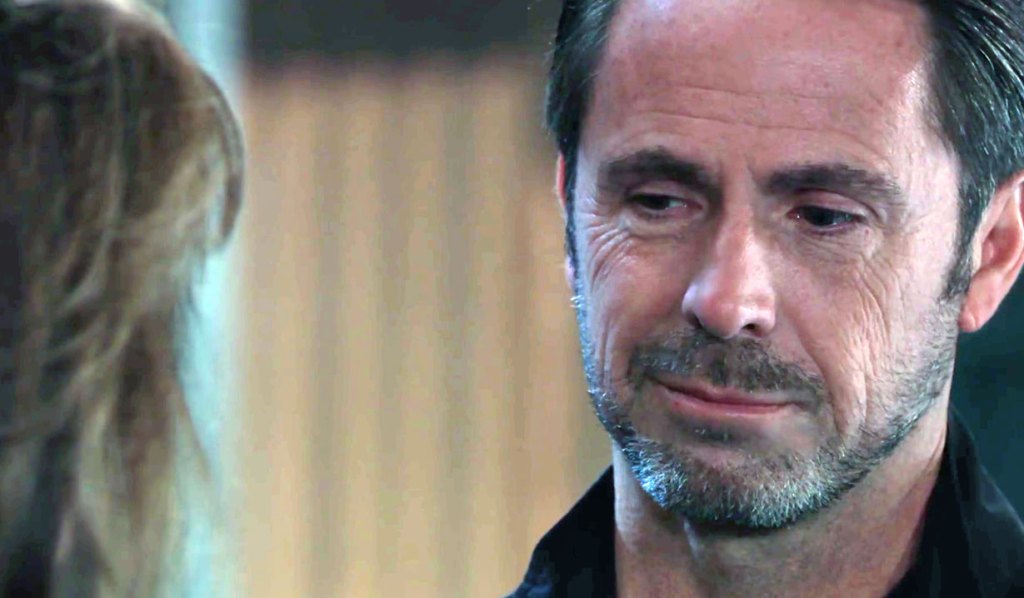 Back at General Hospital, Britt leaves a message with Jason to get to the hospital now. Cyrus turns the corner and asks if there is trouble. Britt says it’s just a minor crisis and nothing for him to worry about. 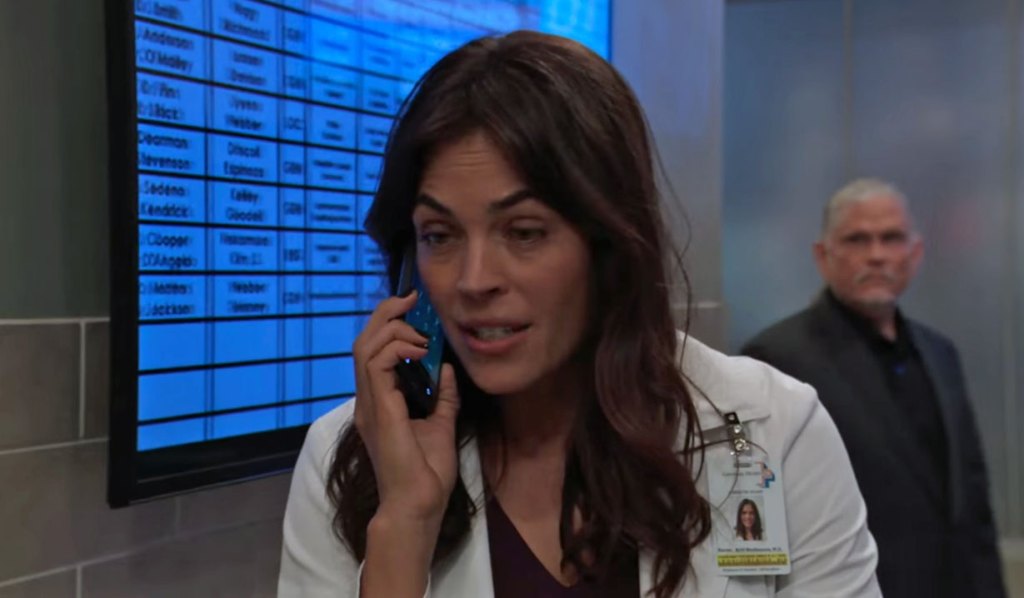 Julian arrives at The Floating Rib with the bag and sits in a booth. He scrolls through photos of his family on his phone. Julian sighs and leaves the bag tucked under the booth and departs. Meanwhile, Dustin meets with Lulu and joins her at a table. She tells Dustin that she loves him and values their relationship. Dustin admits he’s been rethinking moving in and doesn’t want her to doubt his commitment. Dustin pulls out a ring and asks Lulu to marry him. Outside, Laura connects with Jason about the Cyrus situation. Jason advises she talk to Sonny. She decides to do that. Jason then returns Britt’s call and she tells him that she’s found something but can’t talk over the phone. He is with his son and says they’ll have to talk tomorrow. Jason heads back inside and hangs out with Danny some more. As Dev tries again to clear the air with Cam, Franco and Liz arrive and Cam excuses himself to talk to them. Dev grabs a booth and finds the bag underneath that Julian left. Concerned he tells the bartender about the suspicious bag. 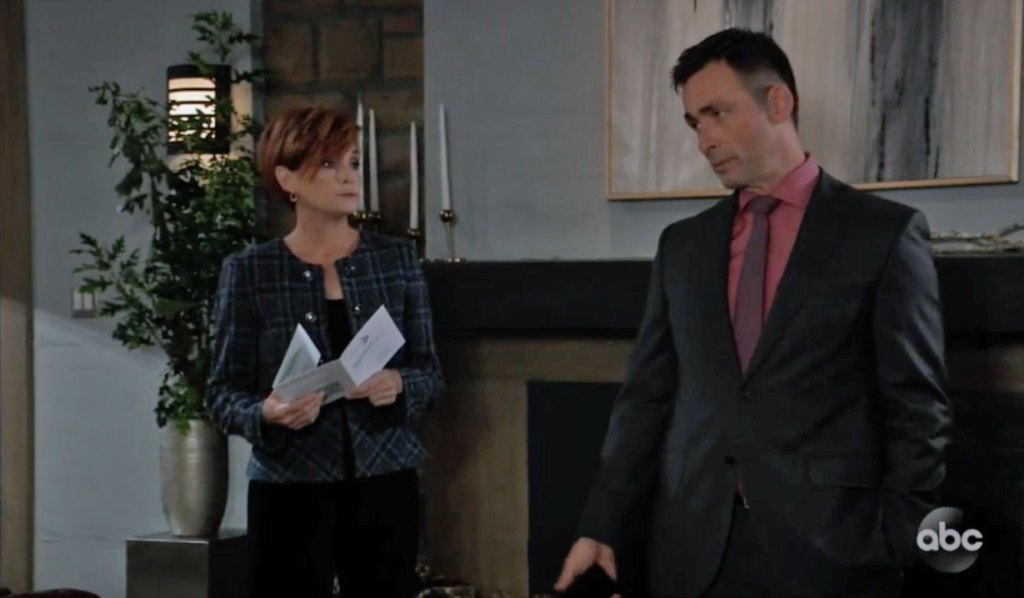 Alexis finally arrives at Sam’s place where she realizes her daughter has staged an intervention. She lashes out at them for betraying her and accuses Sam of using her grandchildren as bait. She refuses to stay, so Sam warns her mom that if she walks out then she will lose all of them.

More: After the explosion, who will survive?

Laura drops by the gym to get an update from Sonny and is surprised to see Dante. She welcomes him home and notes she just saw Lulu at The Rib. Dante departs, and Laura needs to talk to Sonny about something important.

Back at General Hospital, Brad asks Britt if she spoke to Jason. He fears if Jason doesn’t help him then he’s as good as dead.

On the pier, Julian calls Cyrus on the burner phone. Suddenly The Floating Rib explodes as Dante approaches the bar.

On the next General Hospital: Sam races to locate Danny and Jason after the explosion.

Get your free daily soap-opera fix for General Hospital — and all of the other daytime dramas — delivered straight to your email inbox by signing up for Soaps.com’s newsletter. And don’t miss our gallery of Luke Spencer’s most memorable moments to celebrate Anthony Geary’s debut in the role. 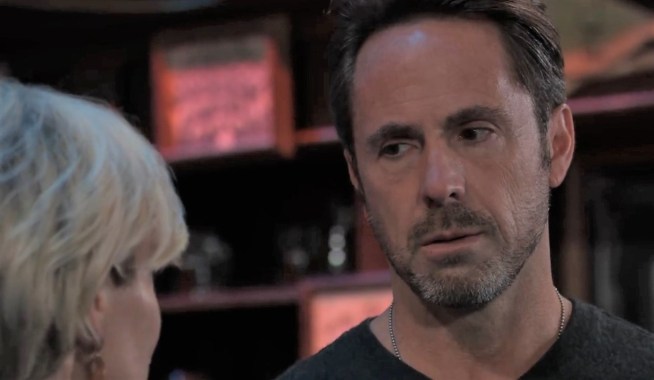 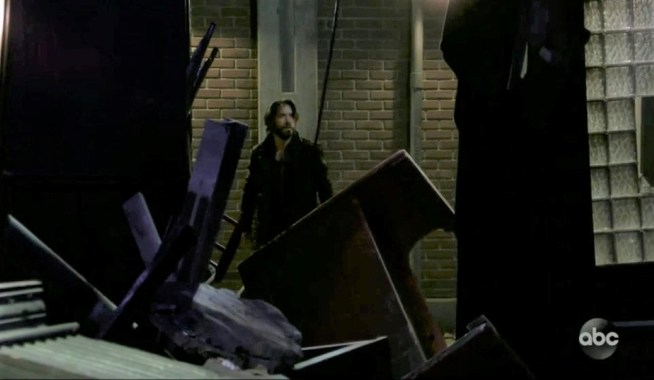