Tuesday, November 17, 2020: Today on General Hospital, Michael and Willow learn the truth about Sasha and Chase's cheating, Cameron hears about Franco's tumor, and Nikolas steps up for Ava. 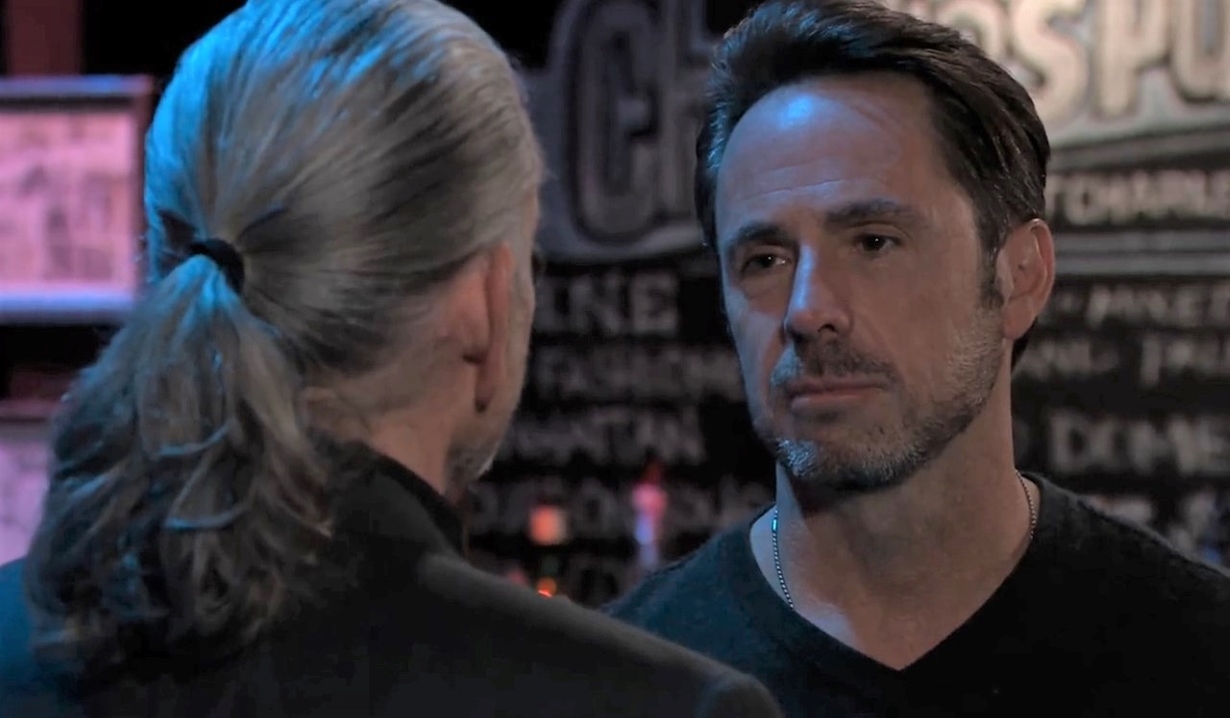 Cyrus is at Charlie’s, telling Julian that it is time for them to settle accounts. They bicker and Renault reminds him that he has what Ryan had over him. He waves around Nelle’s incriminating letter and explains Jason needs to be eliminated. A package will come with instructions on where it’s to be dropped off. An explosion will follow. Julian doesn’t want to risk innocent people’s lives, but Cyrus says he has no choice. Thinking about Taggert being alive, he offers Cyrus something else. Renault is taken aback when he explains that Marcus is still alive.

Ava and Nikolas are in the elevator at the Metro Court. He brings up Ryan’s attack and how convenient that was. She won’t say anything. 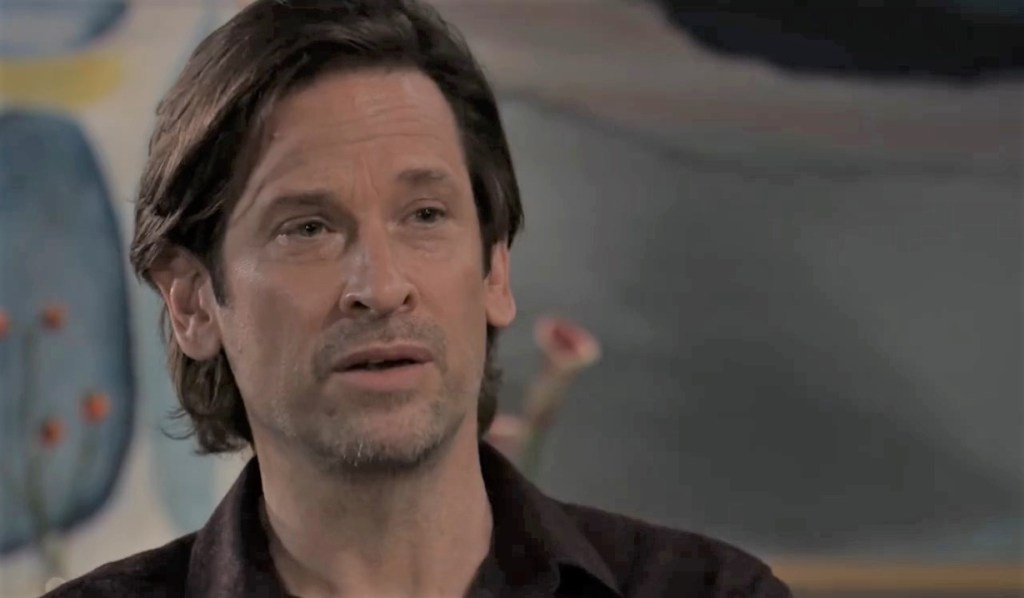 Cam is about to run out of his house when he notices Liz and Franco looking grim. They encourage him to go and study but he’s worried. Franco reluctantly admits he has another brain tumor and it’s inoperable. Cam says they need him to live and asks about treatment. This is like Oscar all over again. Distraught, he rushes out. Liz gets a call from Terry saying that they can run a test on him now. 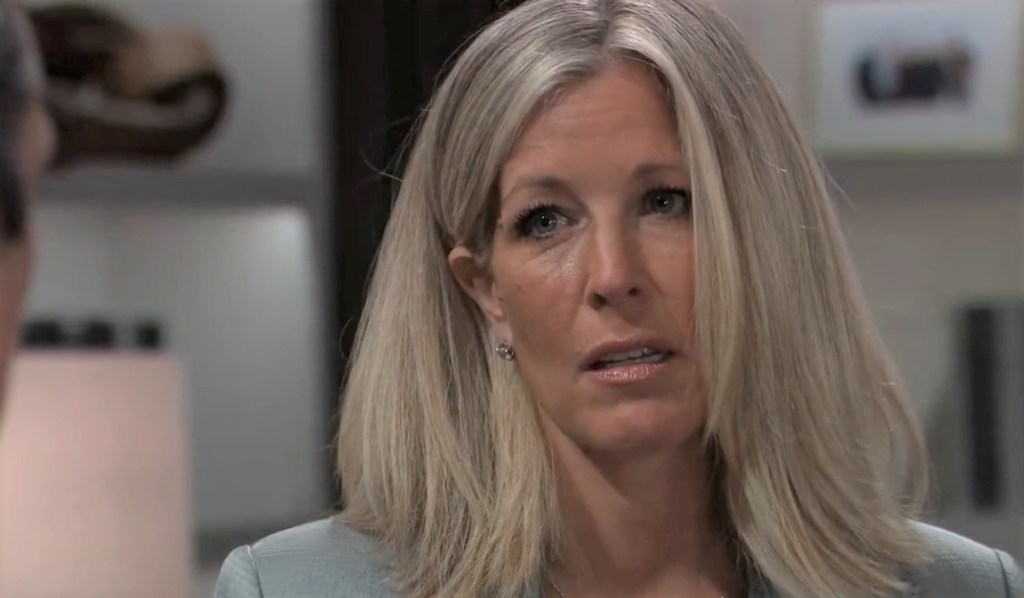 At the Corinthos compound, Carly looks at the half-heart locket and shakes her head. Sonny walks in and wonders why she has Avery’s necklace. She covers. He fills her in about Sasha overdosing. Nikolas and Ava arrive to pick up Avery. As the prince walks off to take a call, Sonny starts ruminating about Ryan. She insists that she had nothing to do with his stabbing but Corinthos feels like something is off. When he threatens her with consequences for lying to him, Nikolas interrupts and claims he’s the one who ordered the hit on Ryan. Outside, Dev joins Joss and Trina on the patio. He wants to help them study, but they don’t want to talk to him after all the horrible things he said. Dev apologizes. They lecture him until Cam interrupts and tells them to lay off. He doesn’t want them to waste their time being mad at each other. Joss and Trina go inside. Cam has no idea what’s going on. 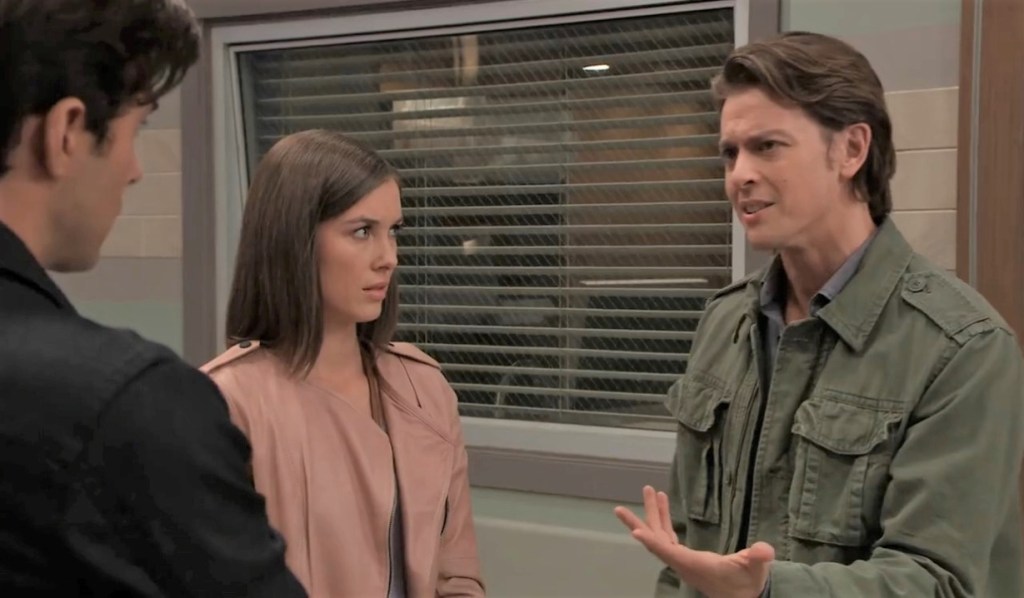 At General Hospital, Michael asks Chase and Willow how they couldn’t have known Sasha was using drugs. Willow only thought she was suffering from a broken heart. After she wanders off to get coffee, Chase finds her sitting in the hall thinking. He sits with her and assures her that he wants her to be happy and move on with her life. She admits she knew that Sasha still loved Michael and part of her didn’t want them to have a happy ending. He finally confesses that he and Sasha didn’t actually sleep together. Meanwhile, Carly joins Michael as he looks in at Sasha. He blames himself for her spiraling out of control. Down the corridor, Portia tells Britt about a death from an overdose. Jason overhears this and notices how upset Britt looks. He follows her down the hall and she explains they are having several overdoses a day now. Jason asks about the drugs she found in Sasha’s system. The doctor refuses to give any information and accuses Sonny of being behind the drugs in Port Charles. He insists that his boss has been keeping drugs out of town and Cyrus has been pumping them through the hospital. She finds this hard to believe and wonders why he’d trust her with his suspicions. When Portia bumps into Michael, she explains that Sasha had a heart attack and may be going through withdrawal. He and Carly are allowed to see her. Taking her hand, he tells unconscious Sasha how bad he feels for what happened to her. His mom tells him to stop. She explains that Sasha and Chase never cheated. Back down the hall, Epiphany catches Taggert sneaking around in disguise. She corners him in an examining room and lectures him. He’s just been watching after Portia and Trina. They talk about protecting their families and she explains how she lost her son to mob violence. He says she’s amazing and thanks her for saving his life.

On the next General Hospital: Britt comes to a realization.

Get your free daily soap-opera fix for General Hospital — and all of the other daytime dramas — delivered straight to your email inbox by signing up for Soaps.com’s newsletter. And don’t miss our gallery of Luke and Laura’s legendary wedding. 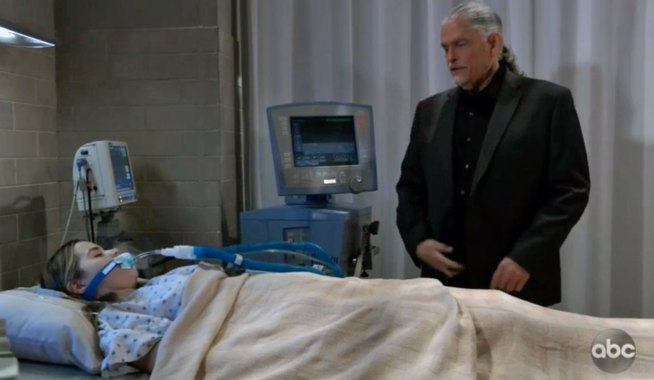 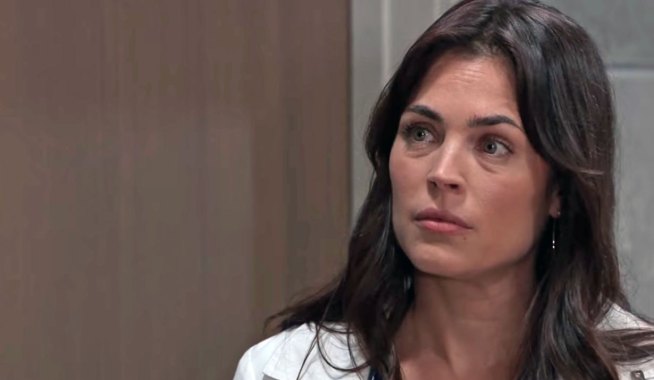