Monday October 19, 2020: Today on General Hospital, Sam confronts Alexis over her drinking, Carly makes a potential mistake during an interrogation, and Michael and Willow come to a decision on their marriage. 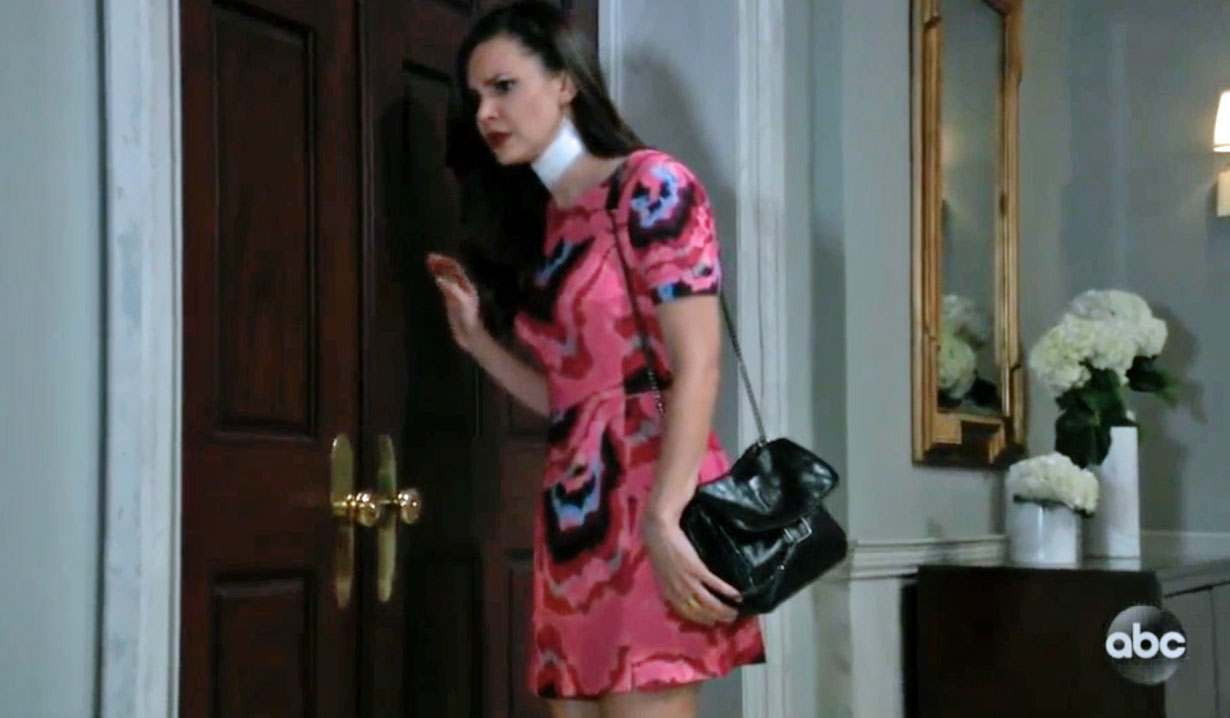 At the PCPD Jordan thanks Carly and Diane for coming in. She sees them into the integration room where they meet detective Delion from Pennsylvania. 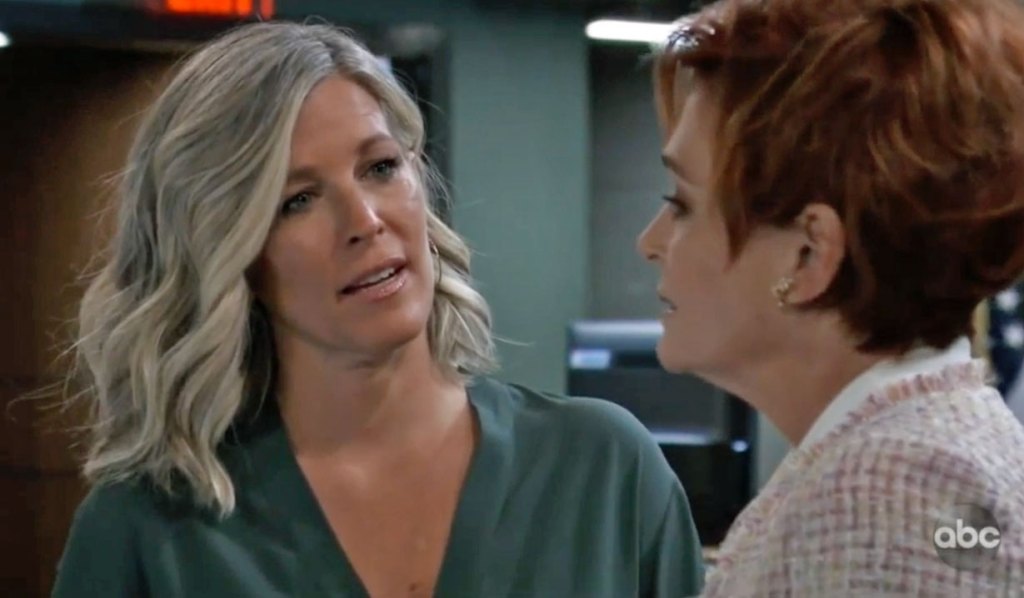 At Charlie’s, Nina sits with Jax when she gets a call about Nelle’s burial arrangements. After the call, Jax is called by Jordan and asked to come down to the station to do some follow-up questions on the night Nelle died. Jax departs, and Valentin joins Nina. After she confides in him about the progress that she’s made in searching for her child, he offers help, but she refuses because she wants to find her child on her own. Valentin adds, “Or with Jax.” She points out that she can trust Jax, but Valentin says with Jax she should know that Carly always comes first. Nina receives a message and gets up to leave, but not before telling Valentin to stay out of her life. Out in the alley, Sasha drops her purse and her contents spill out, including her cocaine. Willow approaches and asks if she needs help. Sasha gathers her things up and says she’s fine. Willow asks her to join her for a glass of wine, so they enter and grab a table. Sasha opens up about crashing and burning at the Deception pitch, and how her confidence has been shot since losing Michael. Sasha thinks this was a mistake, decides to go, and suggests they probably shouldn’t do this again. 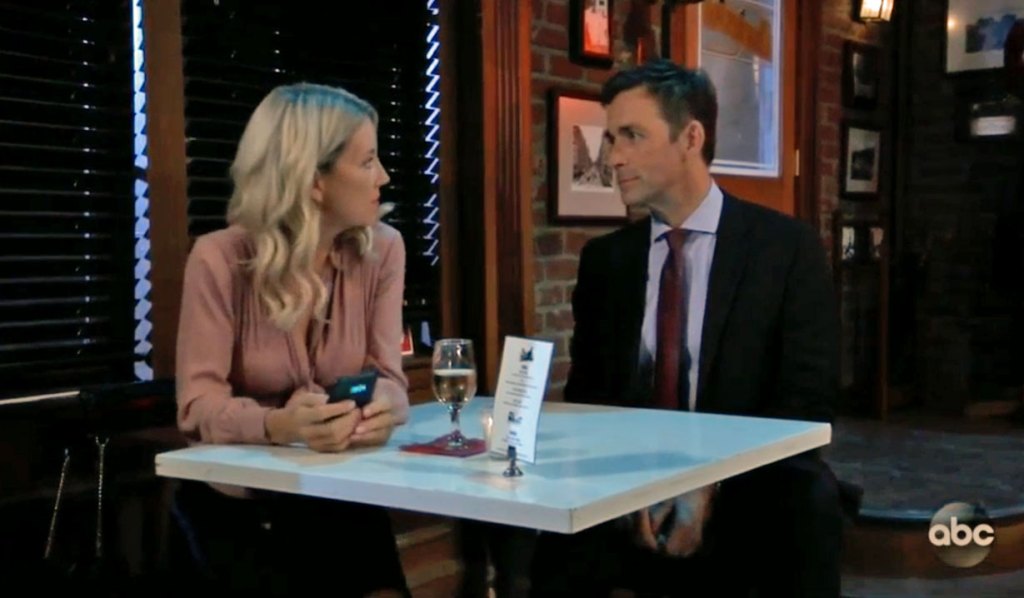 Michael boxes at Sonny’s gym when Chase enters. Chase offers to partner up with him. As Michael takes shots at the pads Chase holds, Chase talks as if they are still friends, which Michael shuts down. Michael admits Chase was his best friend, but not anymore. Michael gets riled up and he accidentally decks Chase. He swears it wasn’t on purpose and storms out. 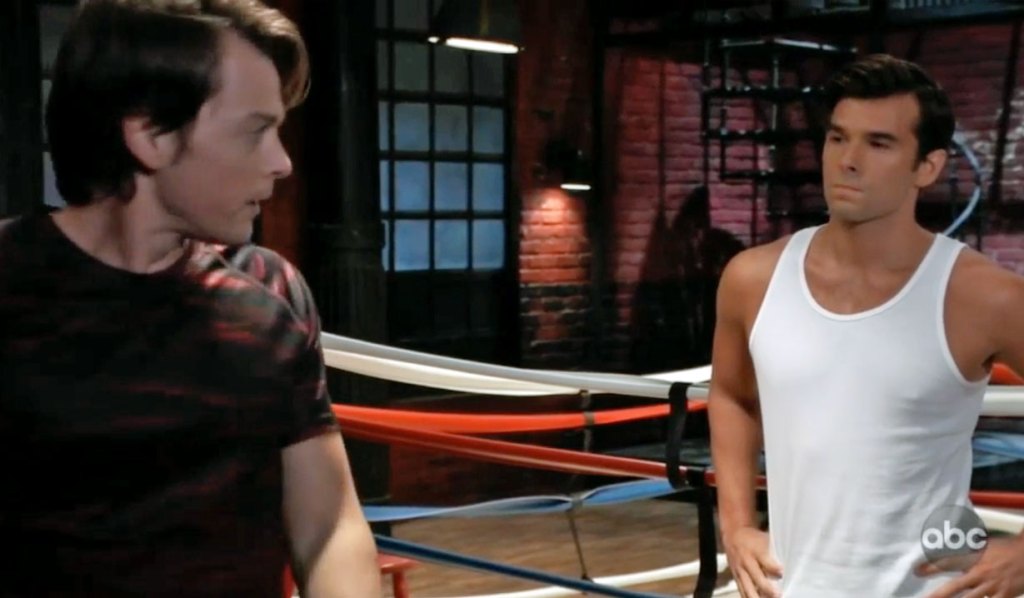 Sam stops by her mother’s place where she accuses Alexis of drinking again. Alexis pours a drink and tells her argumentative daughter to back off or get out. Sam decides to leave but says she will be back. 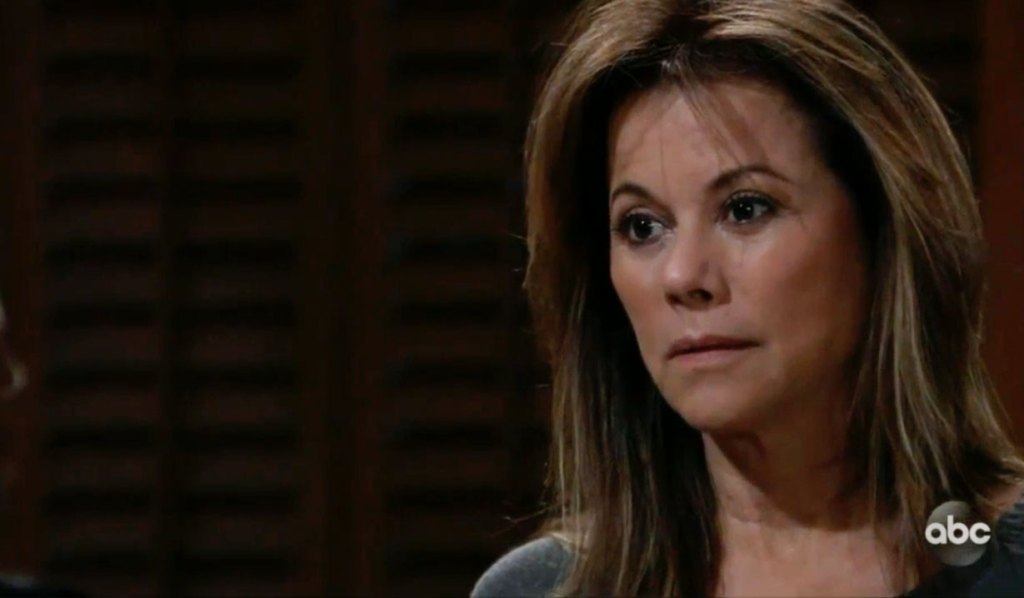 At the Quartermaine residence, in the foyer, BLQ overhears Ned admit to Monica that he cheated on Olivia with Alexis. A stunned Monica suggests he tell Olivia the truth, but he refuses. Olivia comes down the stairs and is surprised to see Brook Lynn home, and asks who she’s spying on. In the living room, Monica grills Ned about his fling with Alexis when suddenly Olivia bursts in with BLQ and asks why she found her with her ear pressed to the door and what they are talking about. Brook Lynn explains she was called there for an intervention that didn’t go well. She left but came back because she had more to say. Olivia has something to say too, but Ned cuts her off and says he and Brook Lynn need to have a private conversation. Monica and Olivia leave them, and Brook Lynn says she knows he slept with Alexis and had no plans to tell Olivia. He reminds her that he thought Olivia was cheating on him thanks to her deleting Olivia’s messages. She lashes out at her dad blaming her and tells him the next time he cheats he’ll have to find someone else to blame. She storms out.

Jax arrives at the station and learns from Jordan that Carly is being questioned by a detective from Pennsylvania. Jordan asks him some additional questions about that night. In interrogation, the detective reveals Nelle died from a traumatic fall and asks Carly if she pushed Nelle. Carly says she did not push Nelle, but she won’t lie that she’s relieved she’s dead. Later, Diane chastises Carly for telling the detective that she was glad Nelle was dead, and she should never volunteer information. Diane departs, needing a drink. Jax enters and asks Carly if she’s okay. Carly reveals that Nelle died from the fall and the detective thinks she pushed her. She knows if she told the truth that they’d charge her with murder, and thanks him for talking sense into her. The two hug, which Nina sees when she arrives.

Michael returns home and finds Willow waiting in the foyer. Both of them have come to a decision about their marriage. In the living room, Ned tells Monica and Olivia that Brook Lynn is gone and wants nothing to do with him. Olivia thinks she can fix things because she’s on a hot streak and Dante is home.

Sasha goes to the gym and finds Chase beating the bag senseless. They discuss Michael and Willow, both of who they feel are moving on.

BLQ goes to Charlie’s where she sits at the bar with Valentin who is drinking to get drunk. She decides to join him.

On the next General Hospital: Dustin offers to let Lulu go and Sam turns to Sonny for help.

Get your free daily soap-opera fix for General Hospital — and all of the other daytime dramas — delivered straight to your email inbox by signing up for Soaps.com’s newsletter. And don’t miss our gallery of who could play Liz’s mom. 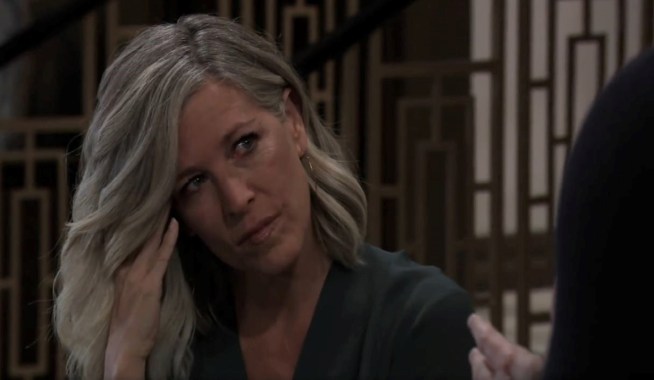 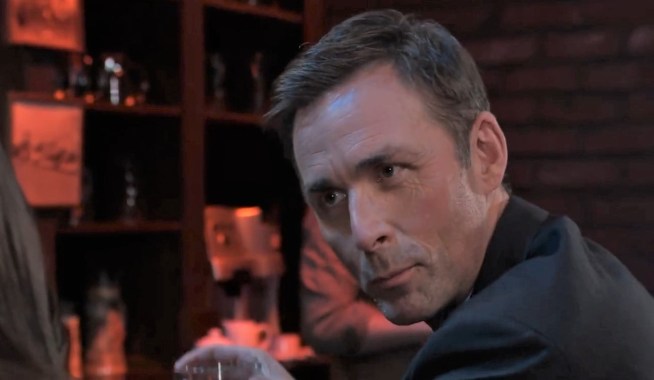