Thursday October 8, 2020: Today on General Hospital, Mike’s family and friends come together at church to share what he meant to them at his funeral. 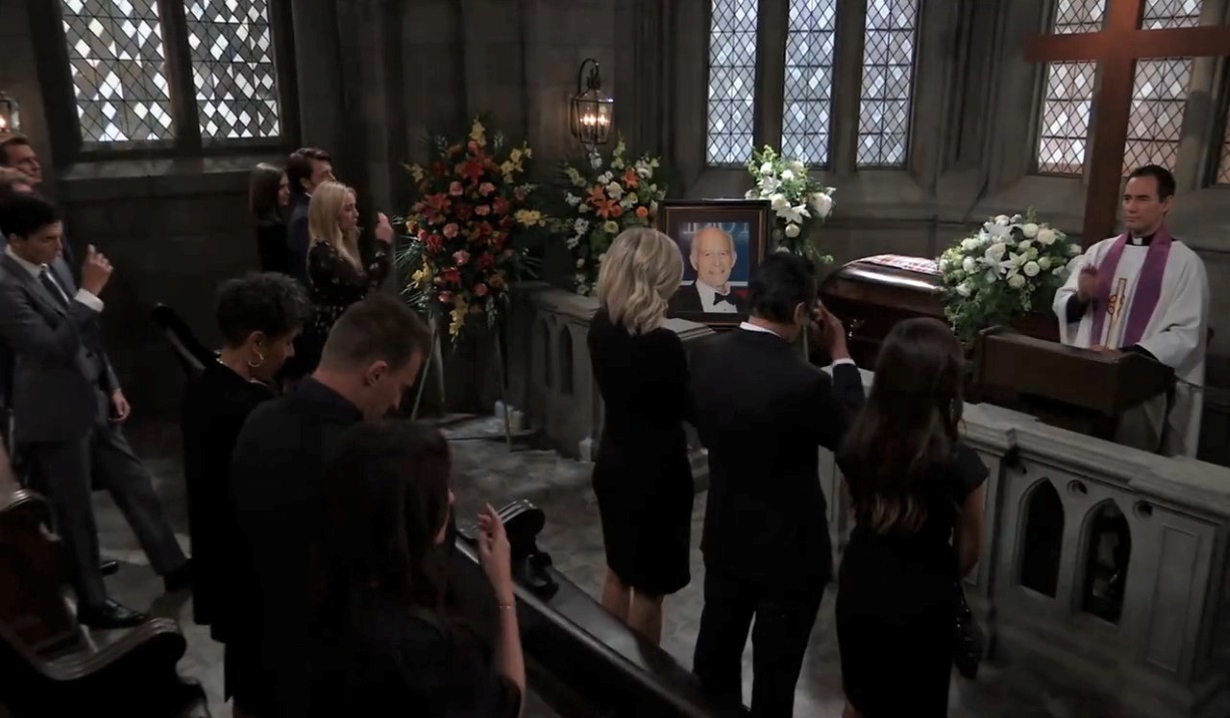 Sonny and Carly go to the church for Mike’s funeral. They walk up the aisle to the flowers and picture of Mike and he thanks her for have it framed. Ava arrives and Sonny thanks her for looking after Avery. Kristina comes in with Sam and Jason. She hugs her dad and says she’s sad. They all sit as Dev and Brando arrive and explain how happy they were to reconnect with Mike. The mourners continue to file in. Olivia tells Sonny that he was a good son and his father knew he could count on him. Sonny and Carly spot Stella lighting a candle and thank her for all she did. When they see Jax and Joss arrive, they welcome them. Brook Lynn arrives and says Mike was one in a million. Diane pays her condolences and Sonny thanks her for always cleaning up his father’s messes. When he walks off, Diane offers to be there for Carly if she ever needs to drink and vent. Outside, Sonny thanks Liz for all she did for his dad and for the advice she gave him. 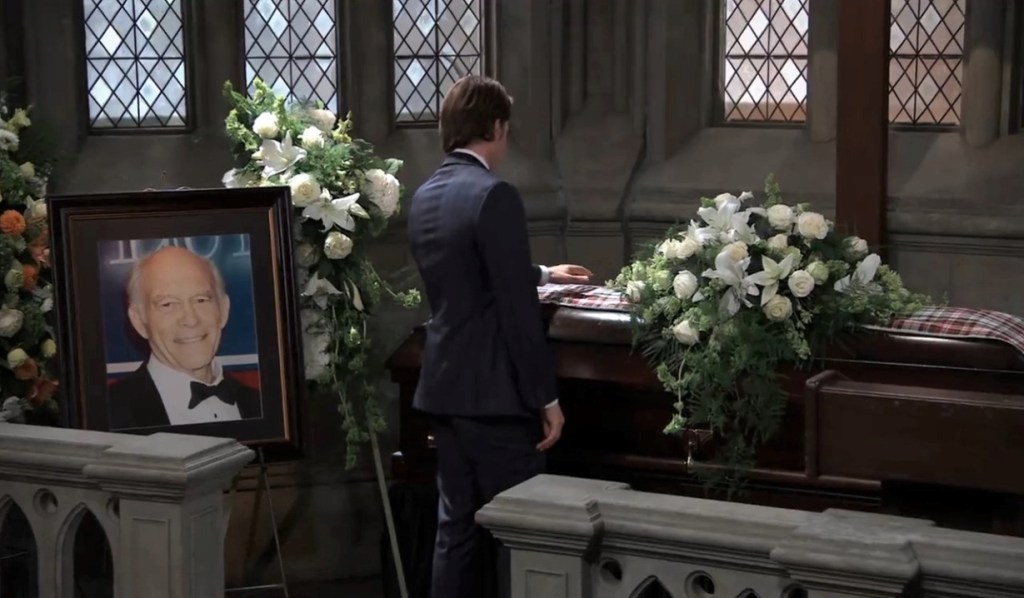 The priest arrives and begins the funeral. Michael is the first to head up from the pews. He talks about how his grandfather loved to party and how he’d like them all to raise a glass for him. He’s sure that Mike loved all of them. Olivia is next, speaking on behalf of Dante. She talks about how they finally got to know each other and what a privilege it was for Dante to spend time with him. Ava goes up on behalf of Avery and talks about how much her daughter and Mike admired each other. He was a bright light in her life and she will never forget him. When Liz takes her turn, she talks about what a great listener Mike was to her and her friends when they were growing up. His return to Port Charles reminded her of how important he was. The next speaker is Brando, who talks about the importance of family, even when they are annoying and make mistakes. Mike was always kind and tolerant and knew the value of what matters. After he sits down, Jason goes up and recalls his first meeting with Mike at Luke’s club. He knows it wasn’t easy for Mike to come back and try to make amends. He never quit trying. Stella takes her turn and speaks of what a great friend he was and how engaged he always was with other people. No one ever beats Alzheimer’s, but Mike held on as long as he could. She thinks the father and son fought the disease to a draw. When Sam goes up, she praises Mike for never being judgmental and understanding that everyone is flawed. That was the example he set for her. Taking her turn, Carly speaks about how wrong she was to doubt that the family could handle dealing with Mike’s decline. There were so many wonderful moments for all of them, even as he was losing control. She recalls the last trip they took to see the horses and how Sonny helped his father find peace. Finally, Sonny heads to the front and admits that he always had a lot of anger toward his dad. It took this illness to make him see his father for who he was. He’s so proud of him, was there for him in the end and Mike was there for him too. He’ll always be grateful for that. After he returns to his seat, Joss sings a song and each of the mourners remembers a moment with Mike.

More: Could this GHer be Chase’s real father? 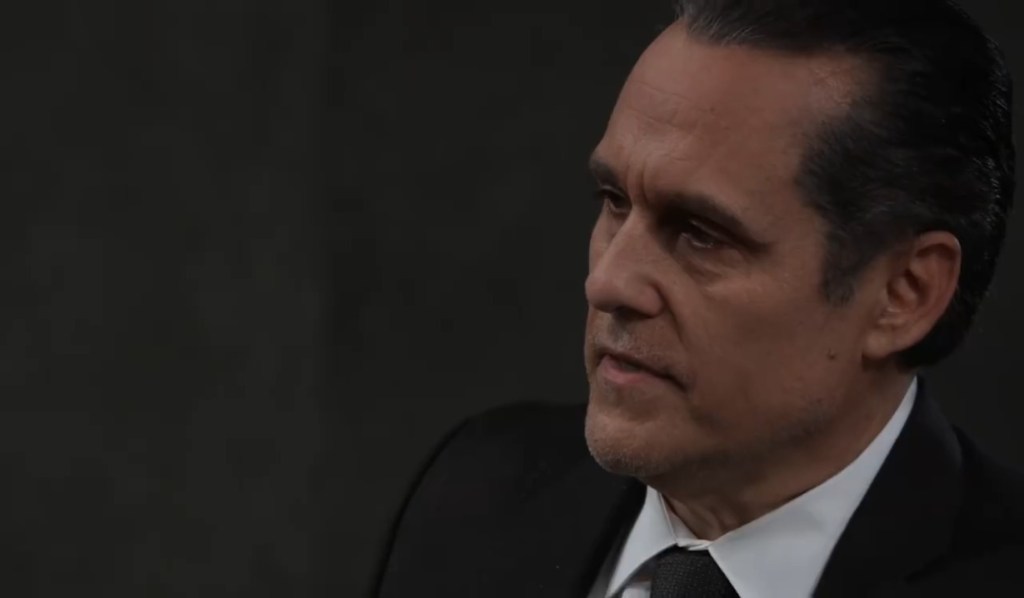 After everyone else has left, Sonny tells Carly that it was a good service and he thinks his dad is with Morgan now. He asks for a moment alone. Once she’s left, he tells his father it’s time to let go. As he wishes he could take back his anger, Mike appears and tells his son to stop romanticizing him. He was entitled to his anger. Mike assures him that he showed him he loved him. The greatest thing he did was forgive him. Now it’s time that he forgave himself. Sonny made him proud. Mike promises he will always be with him and kisses his forehead before walking out into the light. Before Sonny can leave, Dante walks in.

On the next General Hospital: Lulu invites Dustin to move in.

Get your free daily soap-opera fix for General Hospital — and all of the other daytime dramas — delivered straight to your email inbox by signing up for Soaps.com’s newsletter. And don’t miss our gallery of soaps’ closest gal pals. 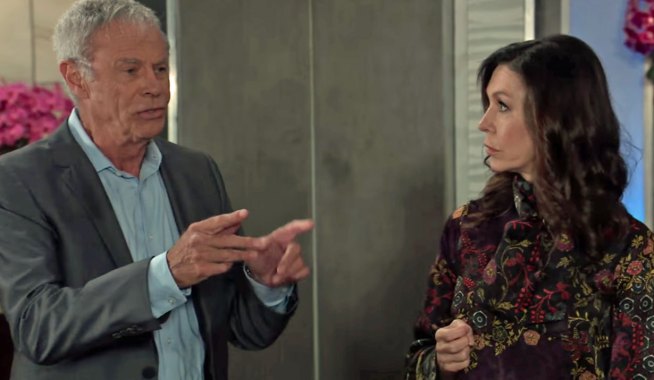 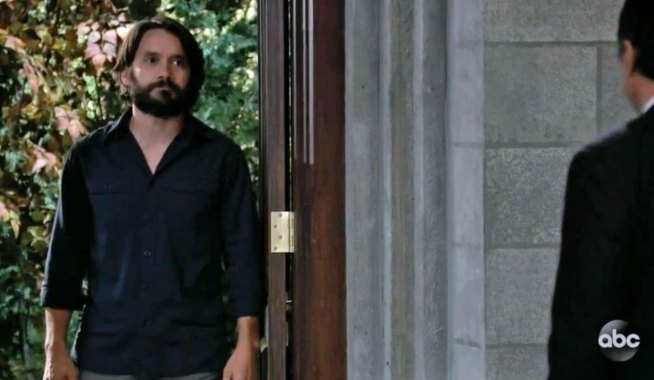