Tuesday September 8, 2020: Today on General Hospital, Peter turns to Valentin for help, Spinelli brings his lead to Jason, and Alexis is in denial. 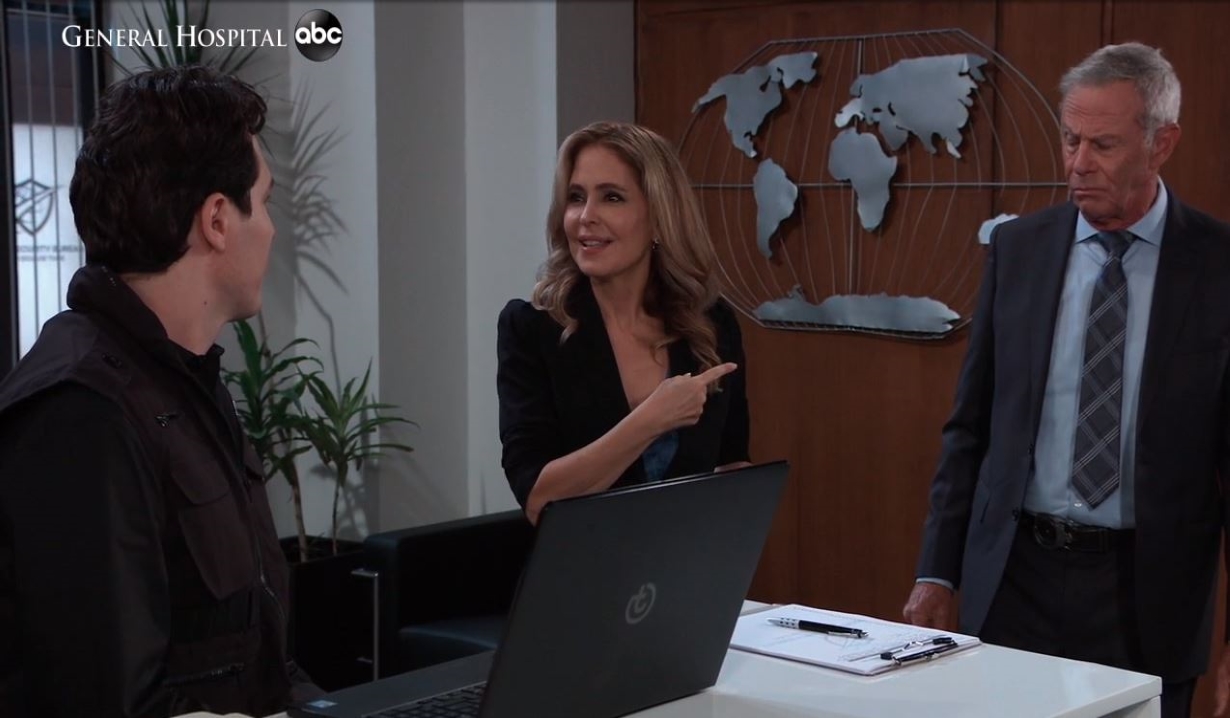 Dante does push-ups in his room at the WSB facility in Geneva. Robert and Olivia arrive at the front desk and sign in. She’s anxious and hopes her son agrees to see her this time. He knows how vulnerable she must be feeling as a parent. Agent Brian Wagner comes out to greet them and Scorpio goes off to fill out paperwork. When he returns, Liv says that Wagner seems to think they are in love. Wagner brings out Dr. Kirk, Dante’s psychiatrist, who informs them it isn’t possible for them to see his patient. This makes Olivia distraught. She begs and the doctor relents, although it will still be her son’s choice. They head down the hall. The doctor goes in to see Dante, who refuses the visit. When Kirk informs Olivia, she refuses to accept it and starts banging on her son’s door and crying. He sinks against the door. She keeps sobbing and begging. Robert takes her away and offers to take her back to Port Charles. Liv insists that they attend Holly’s memorial first. Back in his room, Dante tells his doctor why he couldn’t face his mom. 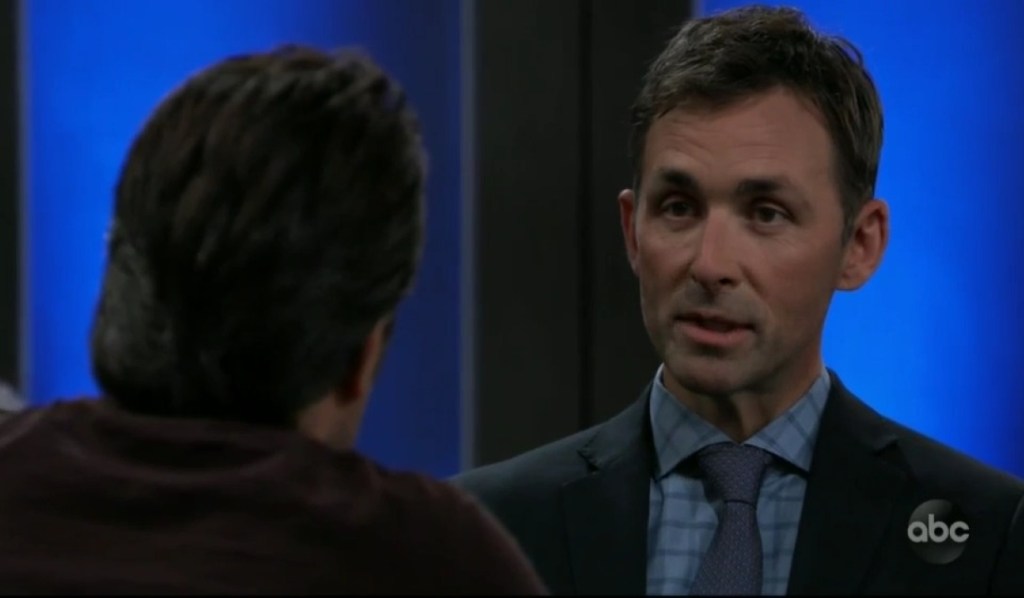 Julian looks for Martin at the Metro Court. He tells Valentin that he’s eager to end his marriage to Nelle. Valentin can understand why but wonders why this is so urgent. He suspects it might be for the best if Nelle never appears again. Peter eavesdrops until Julian exits. August tells Valentin that he needs his help because Nelle has disclosed some damaging information about him and Spinelli has it. Valentin agrees to do whatever he can to save him from Jason. 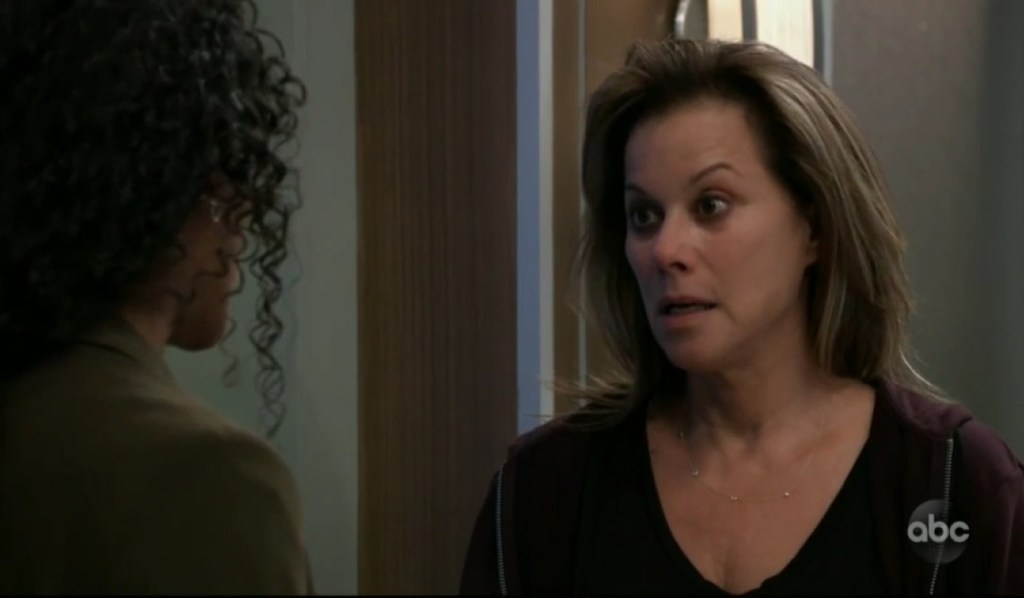 Lulu surprises Kevin at General Hospital with some chicken. She’s also concerned about how long her mother will be in DC. Cyrus pops up to say he’s been wondering the same thing. They start bantering and Cyrus reminds Kevin about when he tried to have him committed. The shrink tells Lulu that Renault fired Monica. She’s livid. Renault tells Lulu he has high hopes for a better relationship with her family. He’s been looking into her mother’s old, dangerous life and wonders if she misses it. Cyrus says he wouldn’t say no to a homecooked meal and walks off. Meanwhile, Brando is relieved that Sam and Jason don’t think that he was behind sabotaging his bike. They admit they’ve had him under surveillance. Jason promises that he’ll be protected while Sonny sorts this out. Brando thanks them and Jason leaves. Sam apologizes to Brando for suspecting him. She tells him about her grifter past and she’s sorry for being so judgmental. When Sam heads down the hall, she hears Kevin and Lulu talking about the hospital layoffs. Down the corridor, Alexis is shocked when Jordan informs her that Neil died of an opioid overdose. This is hard for Alexis to believe but Jordan wonders if this was suicide. That seems implausible to the former lawyer, but she admits that the doctor’s daughter committed suicide. As Alexis gets pensive, Julian arrives and asks if she’s okay. She tells him about Neil’s demise. A doctor comes out and informs them that the drug that killed Neil was injected and there are no defensive injuries. Alexis vows to prove this is a mistake. Back down the hall, Brando gets flowers from Cyrus.

Jason meets with Spinelli at the penthouse, who excitedly tells him he has evidence against Peter. He explains that he got surveillance footage of Peter on the phone after he confronted him with his suspicions. Stone Cold doesn’t think this is enough, only the beginning. He tells Spinelli to get hard evidence before they do anything. After Spinelli rushes out, Sam arrives and tells Jason about Bobbie and Monica being fired. She assumes Jason blames her for this.

Alexis takes Julian home. He finds a syringe under her bed.

Jordan drops by Cyrus’ condo and asks him why he murdered Neil.

On the next General Hospital: Jordan confronts Cyrus.

Get your free daily soap opera fix for General Hospital, and all other soaps delivered to your email inbox by signing up for Soaps.com’s newsletter. And now that Dante is back, which other characters do you want back in Port Charles. Check out our gallery.

A Surprising Phone Call Is Made by...