Monday August 31, 2020: Today on General Hospital, Michael and Willow reassure each other, Sonny shares a moment with Mike, and Jax and Carly agree to keep a secret. 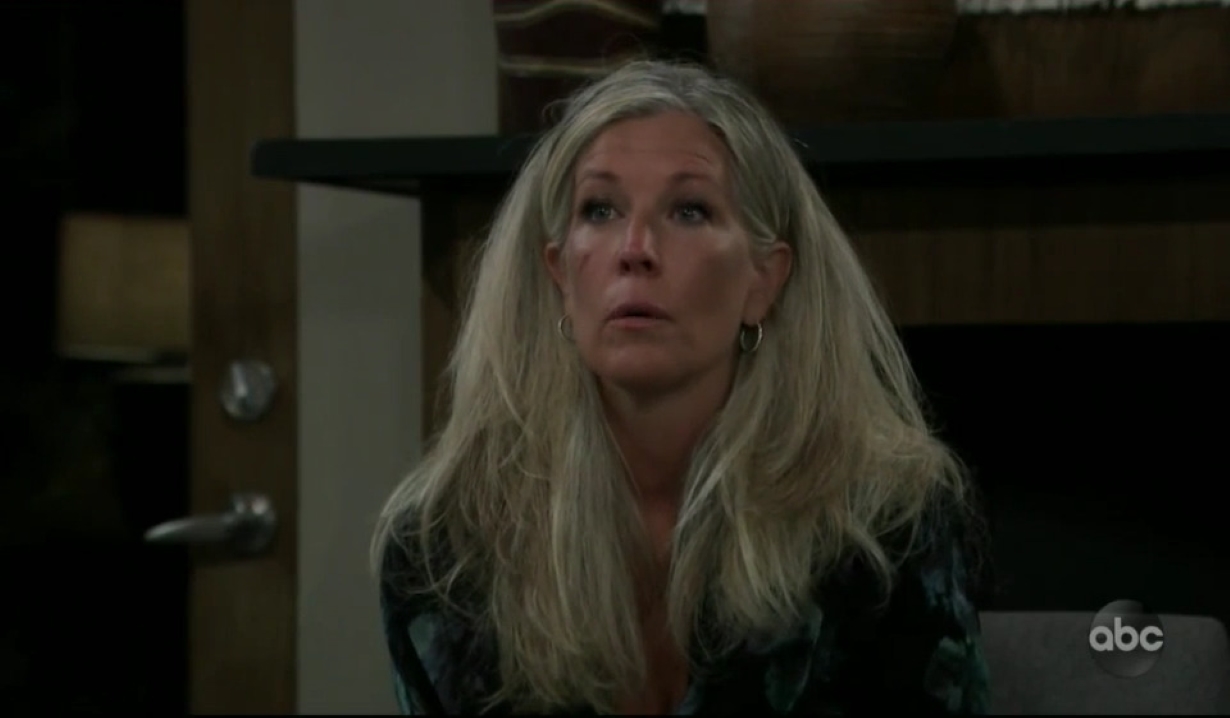 At the cabin, Valerie questions Carly about what happened with Nelle. Carly claims that Nelle knocked her off balance and then disappeared. Jax tries to corral the discussion but Valerie keeps probing about whether or not she hurt Nelle. Valerie promises that she will not stop until she finds Benson and brings her to justice. Jax ushers Carly out. When they are alone, he assures her that staying quiet was the right thing to do. He advises her not to admit to being on the cliff when Nelle fell. This means she can never tell Michael and Willow what really happened. 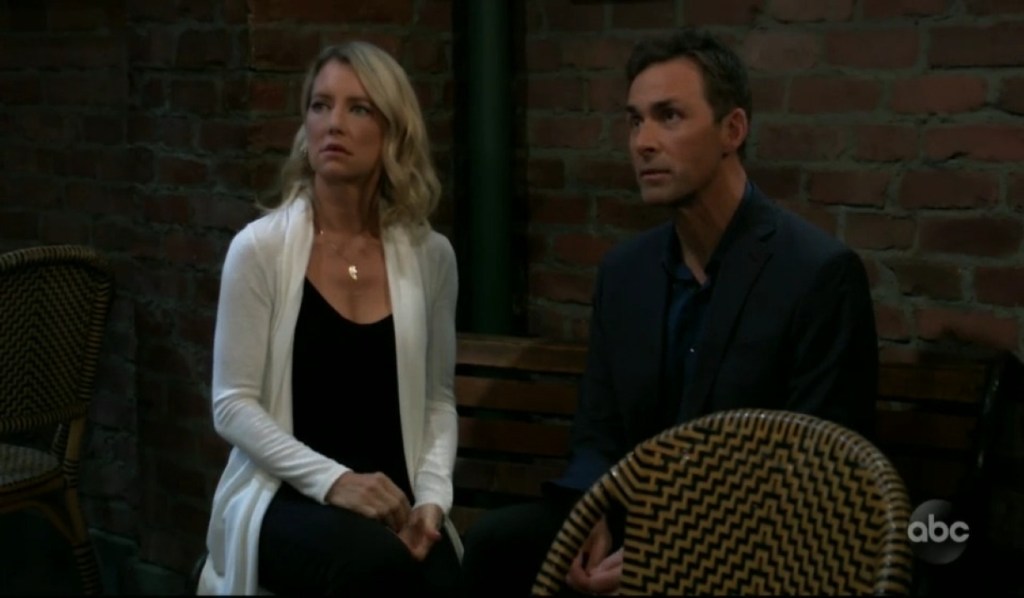 Jason calls Sam at Kelly’s and tells her Wiley is safe. He promises to drop by at home to see her. Outside, Nina sits on the bench looking sad when Valentin interrupts and offers to help. She tells him how much pain she is in thanks to not knowing who her child is. Sam comes out and announces she needs to talk to him. She lectures him for not tipping her off about Cyrus when he was talking her into signing over ELQ proxies. She brings up Michael covering up Sasha’s fraud and accuses Valentin of taking revenge on Michael. After Sam walks off, Valentin explains the deal he made with her. He asks Nina if Jax would go to the same extremes he has. She claims Jax wouldn’t go behind her back or be deceitful and they have a new lead of her child. Valentin says that’s impossible. After she tells him what they’ve learned, he’s not happy to hear she’s hanging her thoughts on a maybe. Crying, she still wonders if he’s found her child and not told her. Jax interrupts. Valentin tells her to be careful and walks away.

Jason arrives at the penthouse. Sam has already put the kids to bed. Danny runs downstairs anyway and his father announces he’s there to stay. The kid tells him all about his videogames. 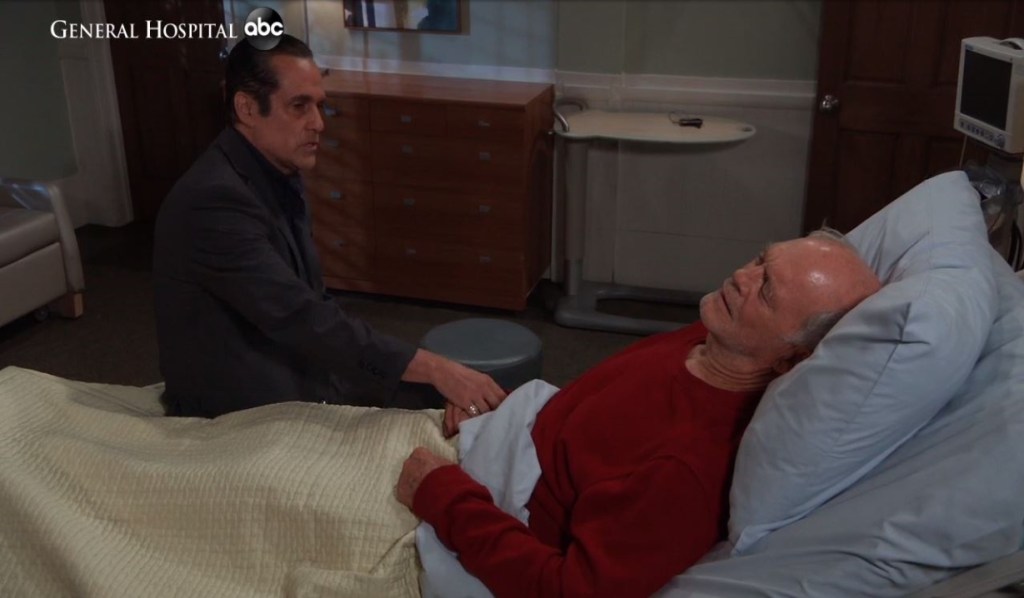 Sonny goes to his father’s room at Turning Woods. He sees that Mike is listening to Ella Fitzgerald. Sonny makes small talk and promises that Brook Lynn will be back to sing to him. He tells his father that he wishes he hadn’t been so judgmental toward him. The time that they’ve had made him happier than words can say. When he says he knows it’s coming to an end, Mike squeezes his hand and a tear runs down his cheek. They share a moment and Mike drifts off again. Carly shows up and tells him that’s fine. He says his father woke up for a moment. She tells him that Nelle got away. 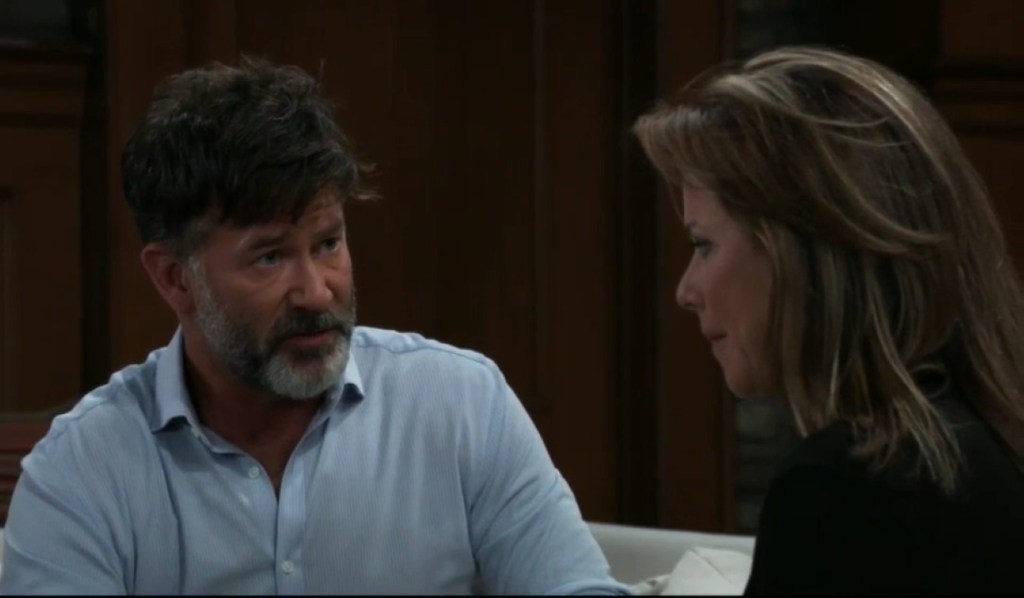 Neil is at Alexis’ place. He asks her if she just wants to be friends or wants more. The former doctor hopes the former lawyer misses him. Alexis says she’s been taking stock of her life and has really missed him. She wants to be a whole lot more than friends. He offers to take things as slow as she wants. They remember how amazing their night together was. After they have sex, they talk about what to do with their new lives. In the morning, she brings him coffee, but he appears to be dead. (Read Nancy Lee Grahn’s reaction to the twist here.) 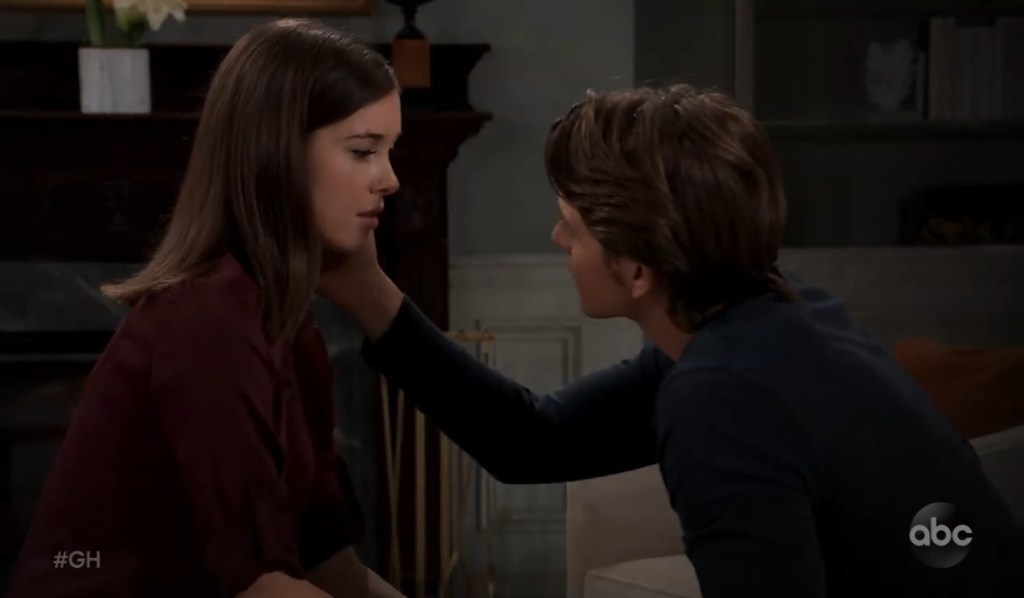 At the Quartermaine estate, Michael puts Wiley to sleep and calls Ned to say things are okay. He gets off the line and tells Willow that Brook Lynn is the one who tipped him off. They check on Wiley and talk about all the adrenaline they’re feeling. She tells him of all the visitors she had while he was away, including Sasha. Despite the circumstances they were married in, she’s realized they are stronger together. He says it was for the best that she didn’t go with him given that Nelle attacked him. They sit down and he assures her that he’s okay. They kiss until Valerie shows up with an update about Nelle.

A cop passes by the necklace on the ground in the woods.

On the next General Hospital: Alexis suffers heartbreak.

Get the soap news, spoilers and interviews in your inbox daily with Soaps.com’s newsletter. And have a look through a gallery of soaps stars on primetime this fall.

<p>The Starz sequel to the crime drama Power has added Sherri Saum (Keri Reynolds, One Life to Live; Vanessa Hart, Sunset Beach) to the cast. <a href="https://soaps.sheknows.com/the-young-and-the-restless/news/562171/amc-yr-alum-debbi-morgan-sequel-power-book-ii-ghosts/" target="_blank">Saum joins Debbi Morgan</a> (Angie Hubbard, All My Children; Harmony Hamilton, The Young and the Restless) who continues her role as Estelle, the grandmother to the main character Tariq St. Patrick. Saum will play investigator Paula Matarazzo in the series scheduled to premiere on Sunday, Sept. 6.</p> <p> </p>

<p>David Fumero (Cristian Vega, One Life to Live) plays Lt. Jason Calloway, and Ryan McPartlin (Hank Bennett, Passions) plays Patrick McKenna in the Spectrum series, which is a spin-off of the Will Smith and Martin Lawrence cop movie Bad Boys. Season 2 premieres on September 9 and welcomes soap alums Hayley Erin (Kiki Jerome, General Hospital) and Michael Graziadei (Daniel Romalotti, The Young and the Restless) in guest-starring appearances. For those who don’t have access to Spectrum, Fox has will begin airing season one of the Gabrielle Union and Jessica Alba starring series on September 21. </p>

<p>The long-running series begins wrapping up its final run of episodes October 8 at 8:00 PM on The CW. Supernatural stars Jensen Ackles (ex-Eric Brady, Days of our Lives) who just landed a new role in season 3 of Amazon Prime’s superhero series The Boys, which has yet to start production. Several <a href="https://soaps.sheknows.com/days-of-our-lives/news/550070/supernatural-final-season-jensen-ackles-gh-alum/" target="_blank">General Hospital stars</a> have made guest appearances on Supernatural over the years – will they make a return before the final episode?</p>

<p>ABC’s new thriller Big Sky, set in Montana, is set to premiere Tuesdays at 10:00 PM EST.  It will star Ryan Phillippe (One Life to Live) as private detective Cody Hoyt.</p>

<p>Nathan Fillion (Joey Buchanan, One Life to Life) and Eric Winter (Rex Brady, Days of our Lives) return for season 3 of the cop drama The Rookie. It will air this fall on Sundays at 10:00 PM EST on ABC.</p>

<p>Shemar Moore (Malcolm Winters, The Young and the Restless) returns for S.W.A.T.’s 4th season which is expected to premiere in November. Moore plays sergeant Hondo in the law enforcement procedural based in Los Angeles.</p>

<p>The return of NBC’s procedural is set for Thursdays at 9:00 PM EST. Kelli Giddish (Di Henry, All My Children) will reprise her role as Amanda Rollins beginning November 12. SVU’s 22nd season will see original series star Chris Meloni return as Eliot Stabler in the premiere episode after a 10-year absence before spinning off into his own show, Law & Order: Organized Crime, scheduled for midseason.</p> <p> </p>

<p>YaYa DaCosta (Cassandra Foster, All My Children) is set to return as nurse April Sexton on Chicago Med and Jesse Soffer (As the World Turns) will return as Jay Halstead on Chicago P.D. They will presumably cross over to each other’s shows, as well as Chicago Fire, throughout the season. NBC’s One Chicago 3-hour Wednesday block will begin airing November 11 at 8:00 PM EST.</p>

<p>Justin Hartley (ex-Adam Newman, The Young and the Restless; Fox Crane, Passions) will be back in the time-jumping family drama This Is Us Tuesdays at 9:00 on NBC. Though the series creator, Dan Fogelman, originally tweeted he wasn’t sure when production would start or when new episodes would air, season 5 will premiere with a two-hour episode on November 10.</p> <p> </p>

<p>Chris Warren (Jimmy Ramírez, The Bold and the Beautiful) has joined the second season of the BET series from Tyler Perry as an attorney named Hayden. Production on Sistas concluded in July with the new season expected to premiere sometime this fall.</p> <p> </p>

Dante Is Surprised When the WSB...