Wednesday August 19, 2020: Today on General Hospital, the Nurses ball continues with more performances while Spinelli is forced to stifle himself, Curtis and Portia rehash their past, and Taggert secretly meets with Jordan. 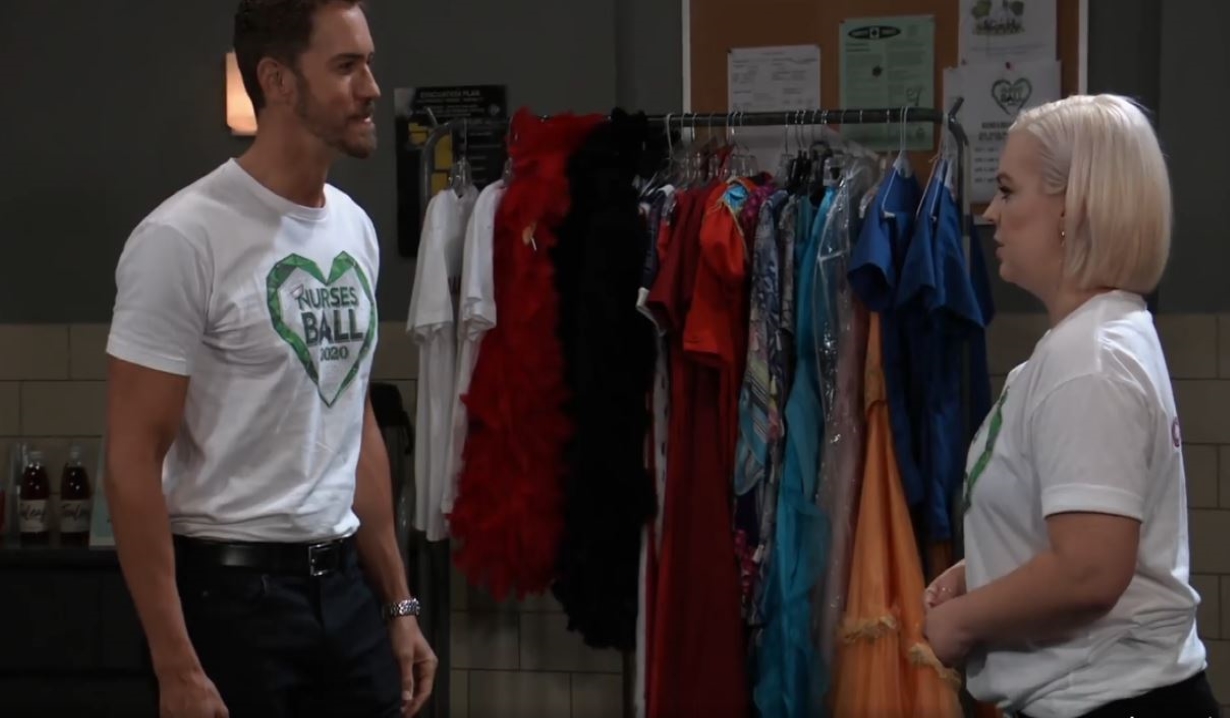 Lucy welcomes viewers to The Nurses Ball, which has been transformed into a telethon this year. She heads backstage and gives Maxie and Lulu instructions on what to say to the camera. Lucy returns to the stage and calls up Amy, Epiphany, and Felix, who make a pitch about the importance of front-line workers. In the telethon’s phone room, Franco corners Liz and asks if she’s mad at him. Ava wanders by and ushers the nurse off to answer phones. Peter tells Anna how proud he is of Maxie. Across the room, Robert tries to keep Spinelli calm, but the Jackal is determined that Maximista learns the truth about Peter tonight. Meanwhile, Portia corners Curtis and asks him why Jordan held a press conference to sing Cyrus’ praises. He doesn’t explain. Trina, Cameron, and Joss show up. Trina shuts Curtis down when he mentions her father.

Sam Molly and TJ discuss Jason’s recovery until he spots Brando and calls him over. Brando admits he’s happy to answer phones instead of wearing a tux. Molly looks nervous. The men discuss their affection for boxing and baseball. Eventually, Sam drags Brando away and he assures her he is not trying to make trouble for her sister.

More: Why it may be time to end the Nurses Ball 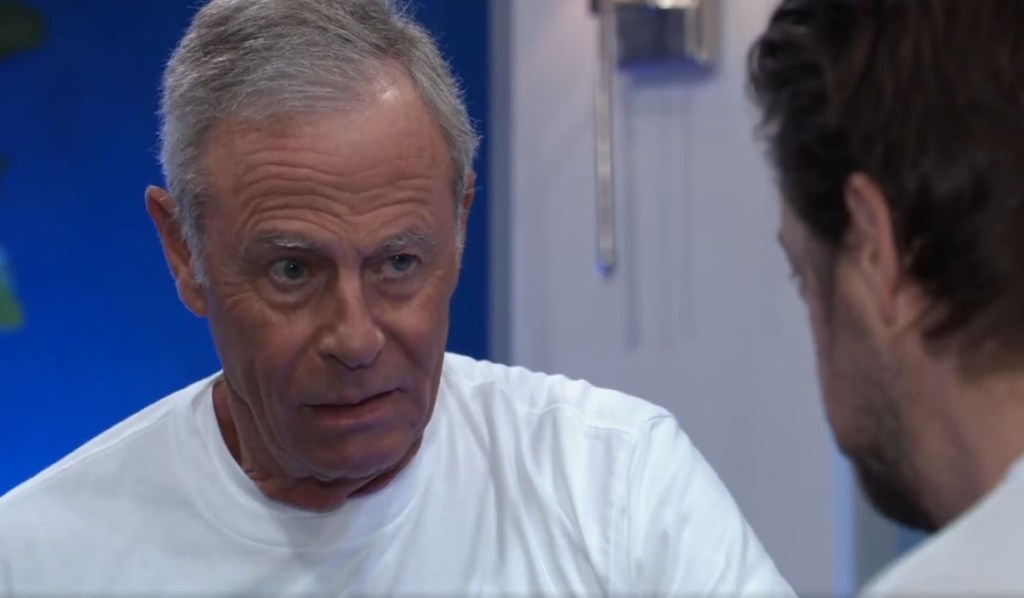 Backstage, Lulu struggles to put Maxie’s mic on her. She accidentally turns it on and broadcasts Maxie talking about being pregnant. Everyone in the telethon room is shocked. Lucy rushes backstage and stops the talking. Maxie assumes she’s just missed her cue and runs out on stage. Lucy follows and lets her know what just happened. Mortified Maxie runs off stage. As Lucy tries to salvage the situation, Felix tells her that Cyrus is determined to say a few words. She’s reluctant but he goes up on stage and tells the audience about getting a bad rap and the importance of second chances. When he wanders off, he runs into Curtis and Portia, reminding the doctor that she basically works for him now. That makes her skin crawl. She walks off and she and Curtis talk about how awful Cyrus is. Portia discusses how things fell apart between her and Taggart, thanks largely to the affair she had with Curtis. When she says that’s all ancient history, he gets uncomfortable and walks off.

Peter runs through the basement and finds Maxie. She confirms that she’s pregnant. This is something she always dreamed of, but she’s scared that she can’t sacrifice enough to have Deception and a child. He points out that they are in this together and promises that he will do whatever it takes and even offers to sell the paper. She’s thrilled. They embrace. Mac and Anna arrive and Maxie tells them that this is good news. He pulls her away to call her mom. Peter tells Anna she’s a grandma now and hugs her before jogging off. She remembers Robert telling her that Peter is likely her sister’s son. 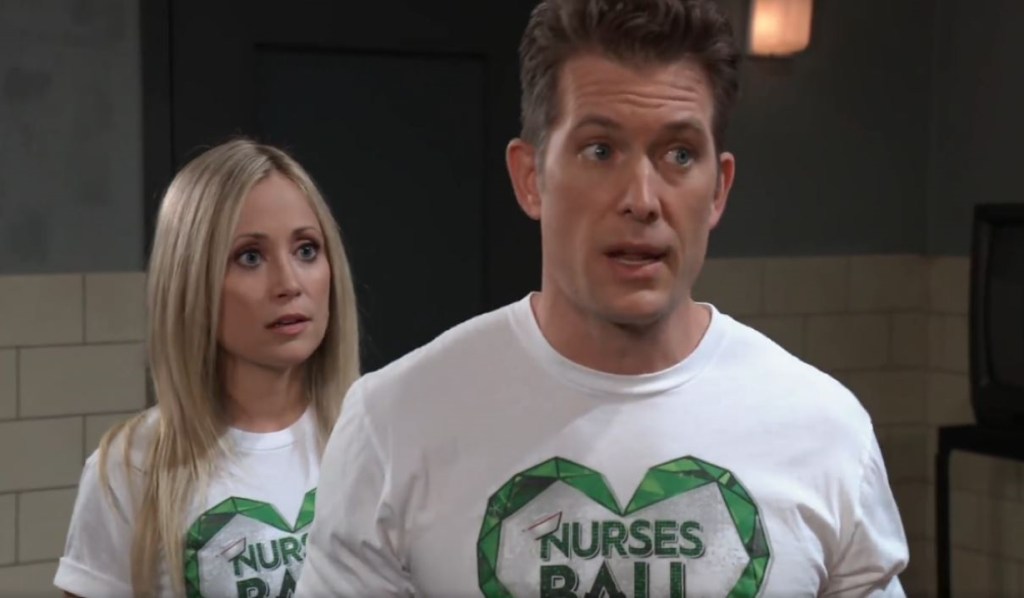 Brook Lynn goes into her dressing room, nearly collapsing from stage fright. Dustin joins her and says she’ll be fine. They hold hands and she tells him he’s always the first one to pick her up. As she kisses him, Lulu walks in, miffed. Dustin tells Brook Lynn to stop using nostalgia as a crutch. He’s moved on. She walks off. Meanwhile, Cameron, Trina and Joss perform a song together around a fake fire. Afterward, Jax finds his daughter backstage and gives her a hug, telling her she’s great. He goes off to see Nina and she worries about what’s happened to her daughter. Valentin appears and asks how she’s holding up. Jax is defensive. Moments later, Valentin watches from the wings as Nina and Valentin do a dance routine to “Ripped Jeans” by Jase Harley. Valentin mopes off and runs into Peter. He congratulates him on his big news and advises him to tell Maxie whatever he’s keeping from her now. Moments later, Lulu and Dustin congratulate Peter and Maxie and urge them to leave and put their feet up. Robert and Spinelli watch. Spinelli admits tonight isn’t the time to let the truth out.

More: Taggart back from the dead, bad for Jordan? 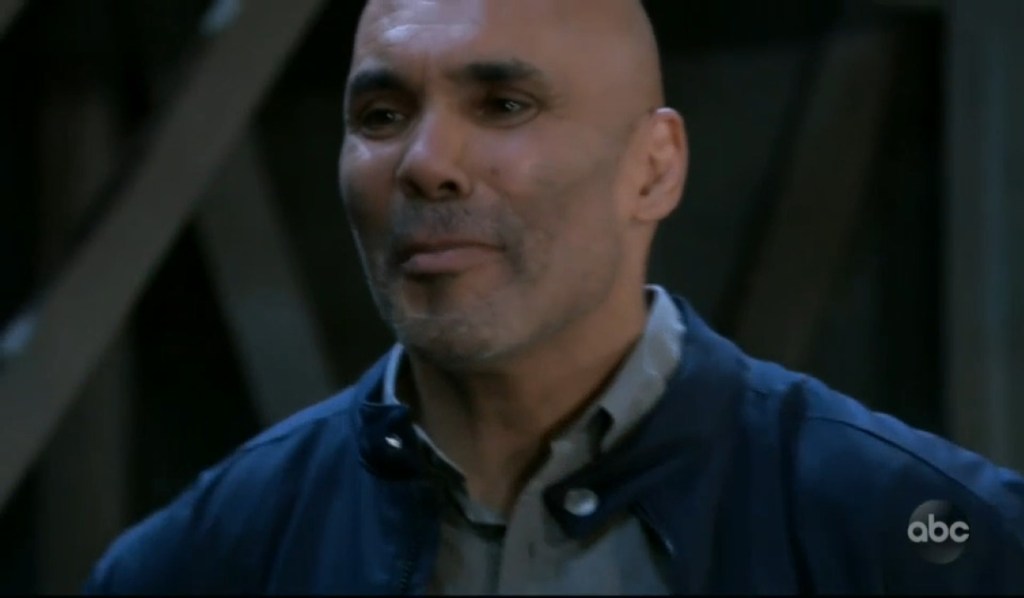 Jordan meets with Taggart on the pier. He says he has unfinished business and couldn’t keep away. She rehashes them faking his death with Epiphany’s help. They bicker about her relationship with Cyrus. Taggart thinks Renault has her under his thumb. He admits he has come back to kill Cyrus and he’ll get away with it. She points out that if he commits murder, he can never see his daughter again. He agrees to leave Port Charles for a while but will keep checking up on her.

On the next General Hospital: Brook Lynn puts herself in danger.

Get the soap news, spoilers and interviews in your inbox daily with Soaps.com’s newsletter. And have a look through possible romances for Sam.

Someone’s in Danger When They’re...

Jay Jeon to Step Down as Busan Festival Director