Monday August 17, 2020: Today on General Hospital, Chase and Finn discuss their father, Jax gets a lead on Nina's necklace, and Liz fights with Franco. 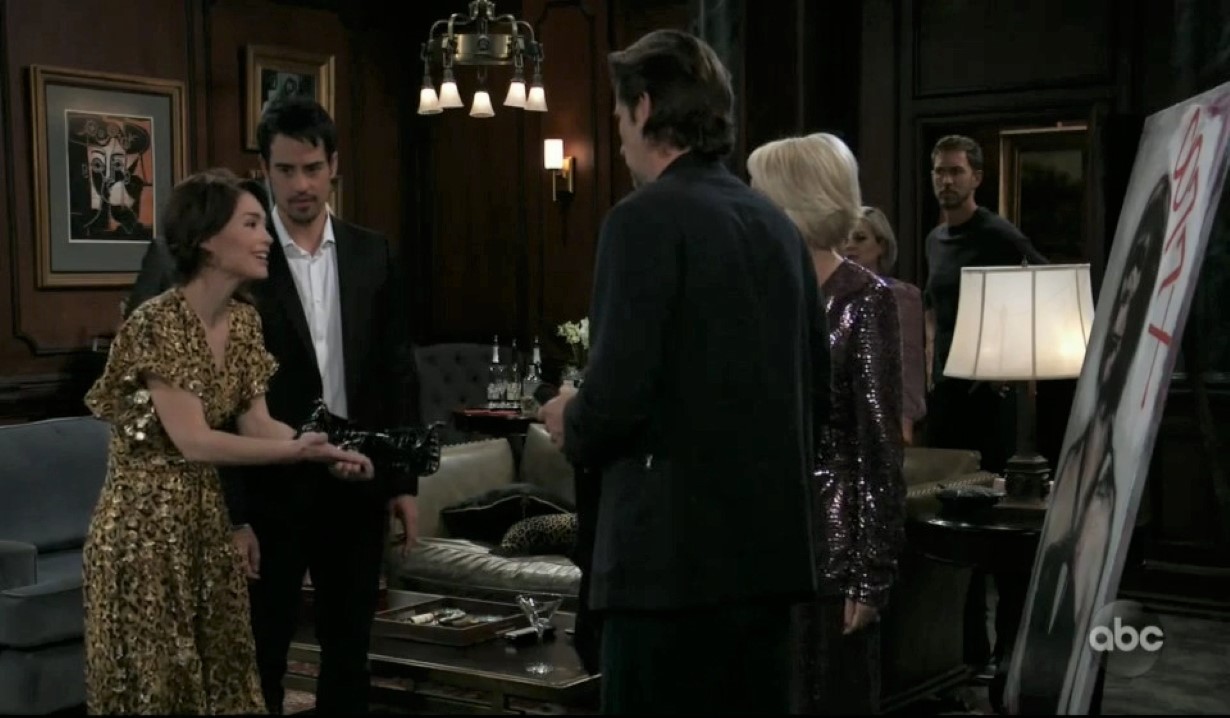 At Wyndemere, Ava tells her guests how happy she was that Franco agreed to paint her portrait. When it is revealed, she’s shocked and everyone starts shaking their heads. It shows her with her face blacked out and his old graffiti tag on it. He claims that his painting has been vandalized. Liz assumes this was Ava’s doing to get publicity. Lulu notices how happy Nikolas looks as Liz, Franco, and Ava bicker. Liz flounces off. Ava orders everyone to leave. Franco feels like his past will never leave him alone. He assures Ava that he doesn’t think she defaced her portrait. She wanders off for a moment and then returns, eavesdropping on Lulu telling Dustin all about Nikolas’ plot with Spencer to get rid of her. Lulu suspects her brother was behind the painting’s defacement. After she and Dustin leave, Ava curses Nikolas. When she runs into Franco again, she tells him she rails about her husband plotting against her. If she leaves, no one will be waiting for her. She sobs about being alone. He assures her that she will always have him. Meanwhile, Nikolas joins Liz on the parapet. He admits he can’t imagine his wife destroying her portrait. Liz thinks Ava will destroy whatever good is in him. He quizzes her about her problems with Franco. She hates anything that harkens back to his past. It’s painful to watch when she’s worked so hard to convince people he’s changed. The prince assures her he has a plan to deal with all of this. She points out how bad his plans go. When he gets close to kissing her, she takes off. When she stops to look at the painting inside, Franco joins her and apologizes for everything. They soon start bickering and she leaves him behind to clean. Ava finds Nikolas upstairs and confronts him about his scheme with Spencer. She vows to make sure he doesn’t get a dime. They insult each other until they get horny and kiss. She accuses him of trying to manipulate her into sex and walks out. 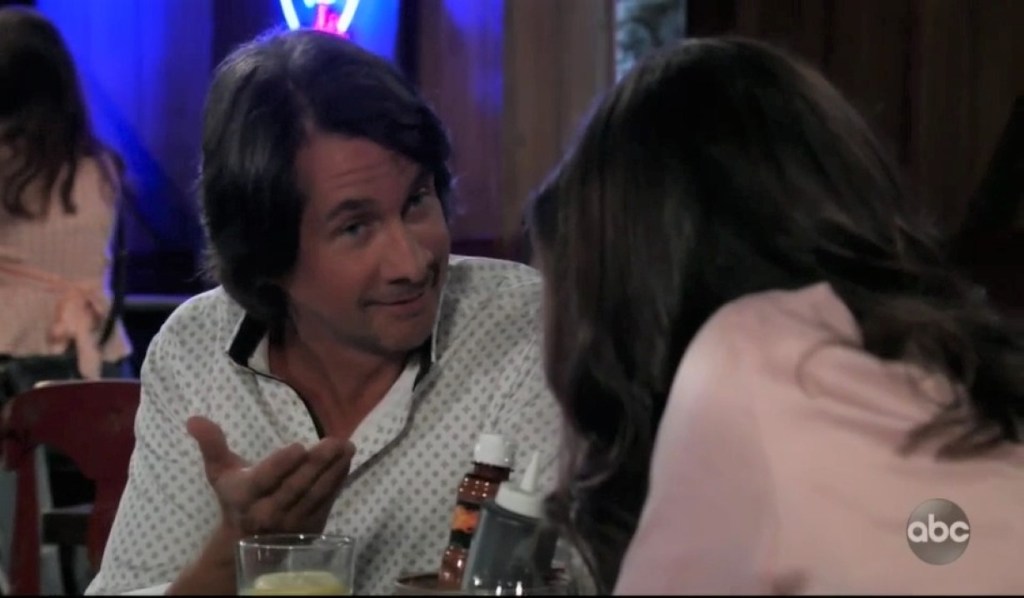 At the Floating Rib, Finn admits to Anna that he would like his father to be in Violet’s life… at some point. Chase wanders by so they invite him to join and talk wedding plans. He wonders if his dad is invited to the ceremony. After she walks off, Chase urges his brother to let his hurt go and let his father into his life. Chase admits that he hasn’t been able to tell their dad about breaking Willow’s heart. His brother tells him to explain what really happened but Chase insists they need to keep it silent so it won’t get back to the judge. Maxie and Peter arrive and he notices she’s not excited about work. She claims that she’s just nervous. Big changes are on the way and she doesn’t want anything to come between them. Before she can give him the big news, Anna interrupts. Peter takes off and leaves the women to catch up. Anna reassures her that letting people down is okay because you can’t do everything, you just have to find balance. Meanwhile, Peter eavesdrops on Finn and Chase before returning to Maxie. 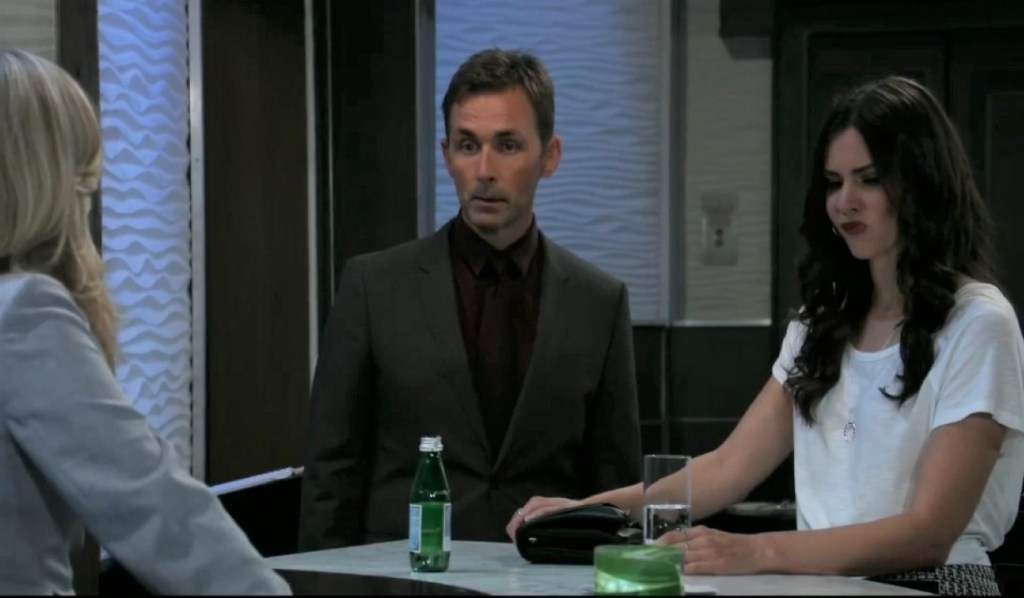 Brook Lynn strolls into the bar at the Metro Court looking for a drink. Carly offers her water. The Quartermaine explains that Michael is out as CEO of ELQ and it might be her fault. She recaps the situation in time for Valentin to appear. He and Brook Lynn head across the room for a table. She demands an apology. She knows he’ll be good for the company and he’s sure that Sonny can take care of Cyrus if he’s a problem at General Hospital. He assures her that he will come through for her at the Nurses Ball. Jax and Nina arrive and Carly giddily tells them Michael’s good news. She brings them champagne and talks all about Wiley. Nina gets uncomfortable watching them together. He leaves to take a call and is given news about Nina’s necklace. When Carly returns to the bar, she and Valentin discuss Michael. She’s sure her son will get ELQ back. Jax returns to Nina and tells her his jeweler can trace her necklace. Dustin and Lulu enter and she tells him she was one of Franco’s targets. Brook Lynn interrupts and tells them she was kicked out of the house. This quickly leads to the women calling each other names.

On the next General Hospital: Carly works with Nina.

Get the soap news, spoilers and interviews in your inbox daily with Soaps.com’s newsletter. And have a look through the gallery of the challenges faced by Sonny.