Sole Custody of Wiley is Given To [Spoiler]

Wednesday August 12, 2020: Today on General Hospital, Nina gets a lead, Mike makes a decision, and Valentin takes over ELQ. 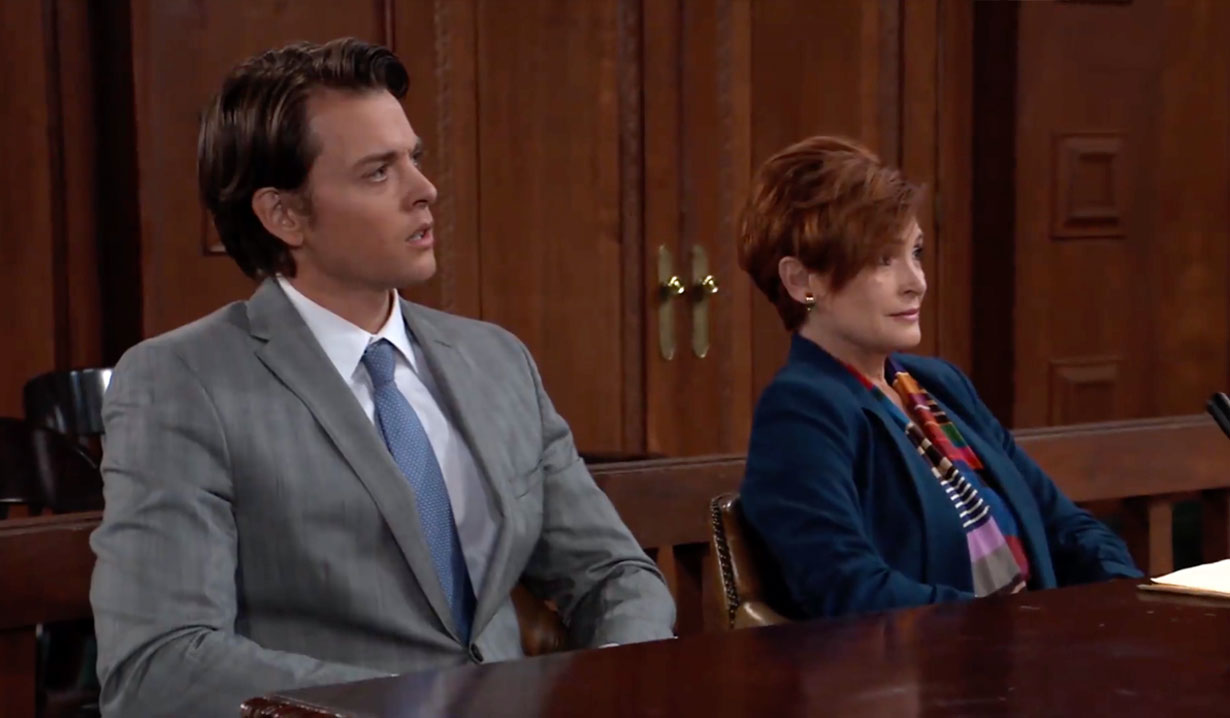 Sonny visits Mike at the hospital. He’s conscious and says he’s ready to go home. He mumbles the words baseball, music, old friends. Felix enters and tells Sonny he feels what Mike is trying to communicate is that he wants to go where he feels is home. Sonny assumes he wants to go back to Turning Woods, so Felix leaves to make the arrangements. In Jason’s room, Sam is thrilled when he wakes and calls out her name. Confused, Jason asks why he is there. She tells him about his motorcycle crash, which he doesn’t recall, and that he had to have surgery. He realizes Sam needs to leave because she will get in trouble with Delores, but she tells him Delores was replaced with a new parole officer who has no interest in keeping them apart. Jason asks how she did this and tells him about the deal she struck with Valentin. Jason is stunned and while he doesn’t care about ELQ, it is important to his family and they’d want Valentin nowhere near it. 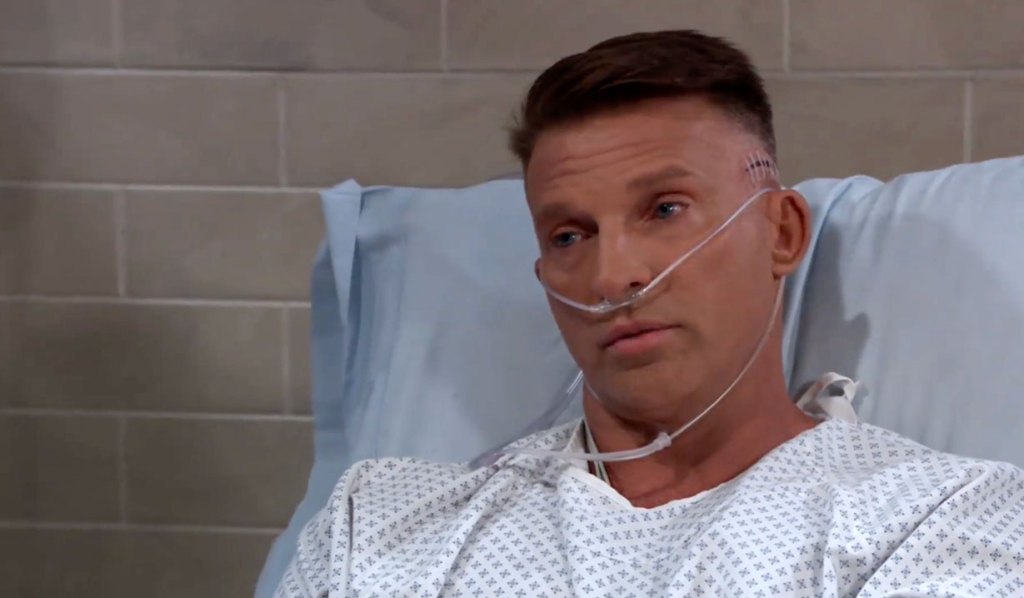 At the Quartermaine mansion, Ned tells Lucy that General Hospital needs ELQ’s cash to stay afloat, while Valentin tells her that she knows what is at stake. Lucy votes with Valentin and suggests Cyrus Renault can bail the hospital out. Ned says he is a known drug trafficker, which Lucy didn’t know. Ned tells Lucy he’s so glad Alan isn’t here to see what she’s done with her vote. Valentin says there is to be one more vote, a new CEO. Ned says this can’t be legal, but Valentin assures him it is. He asks Ned to tell him to transfer all passwords to him and suggests to Lucy they depart. Brook Lynn tries to follow, but Ned stops her. He lashes out at her for her carelessness and selfish behavior, and Olivia is stunned when Ned throws his own daughter out of the house. Brook Lynn packs her bags and leaves with Ned slamming the door on her. Olivia shakes her head at her husband. 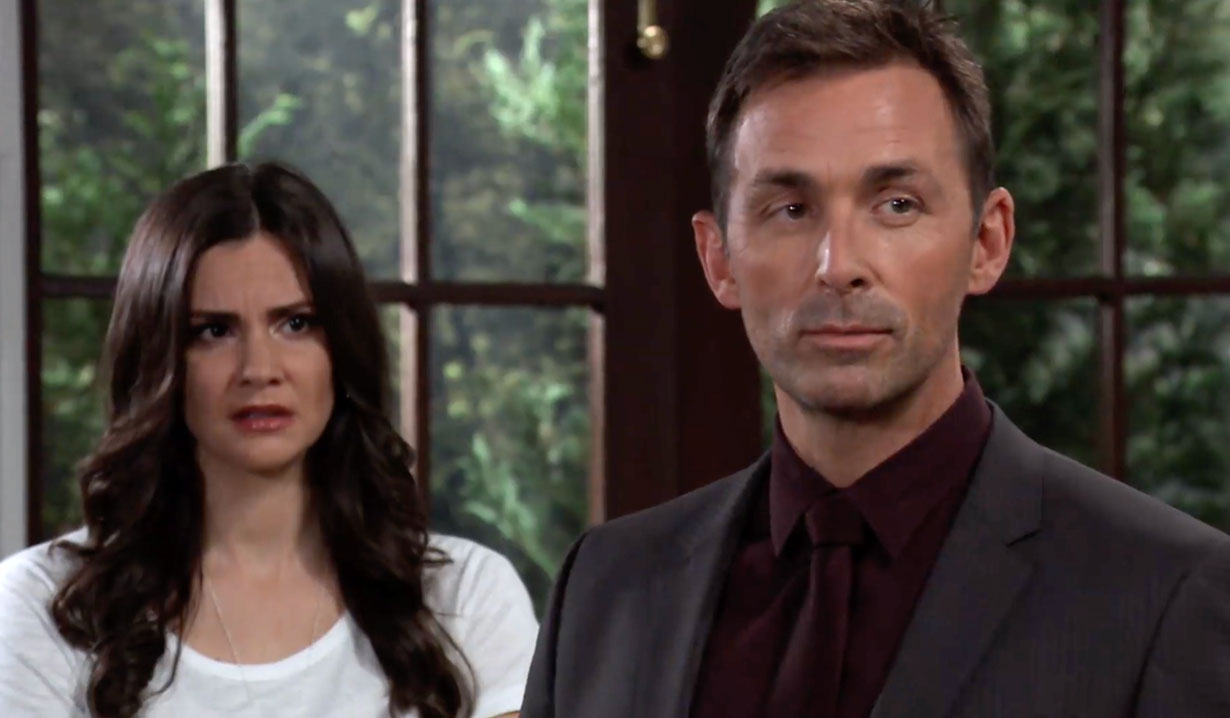 At Crimson, Nina finds a note from Nelle on an issue telling her how awesome it was. Jax arrives and knows something is bothering Nina because she canceled their dinner last night. Nina shows him the note. Jax tells Nina not to let Nelle manipulate her or doubt herself. Jax switches the subject to her necklace and searching for her missing child. Nina had a jeweler look at it, but he couldn’t tell her anything about it. Jax knows some experts and calls one. Later down in the restaurant, Jax’s associate looks at the piece and believes she knows who made it and will be in contact. She departs. Later, Valentin arrives with Lucy, who is furious at him for making her choose between General Hospital and Deception. Spotting Nina and Jax, Valentin drags Lucy over to inform them that he is now CEO of ELQ. Jax assumes Valentin has something on Lucy to force her vote, and Nina hopes Valentin has finally found what he’s wanted. 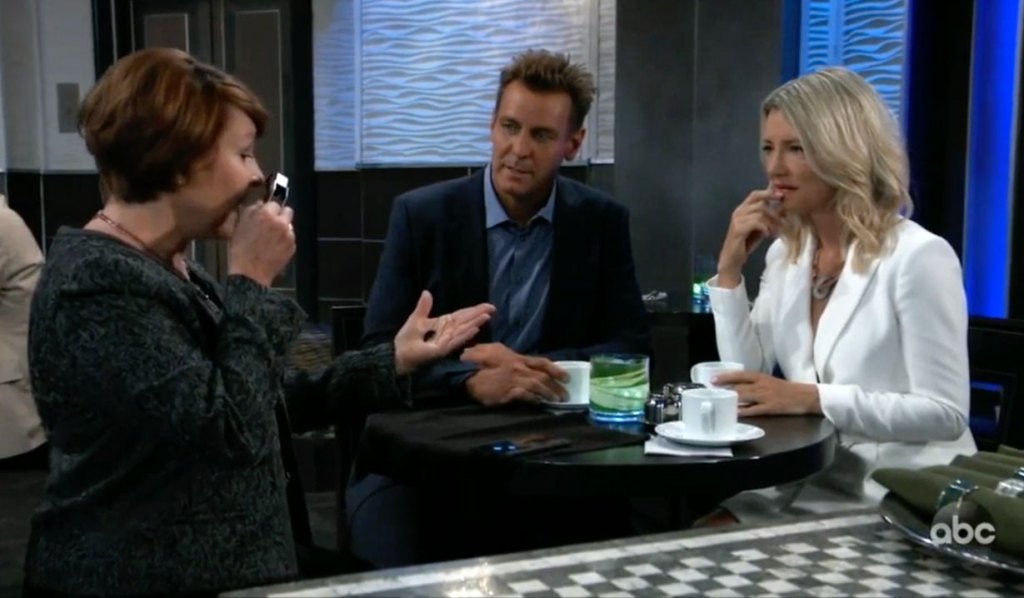 In court, Nelle pockets her fake passports and checks the Wiley tracker on her phone as Michael and Willow enter, followed by Carly and Diane. Diane inquires where Martin is, and Nelle reveals she fired him and petitioned the hearing to be closed, which means Carly can’t be there. Carly leaves and Willow decides to go with her so she doesn’t have to wait alone. Julian arrives and Diane tells him this is now a closed hearing, and he can sit in the gallery, which is fine by him. Court begins and the judge runs down all the facts and gives Michael and Willow sole custody of Willey. Michael and Diane go and give Carly and Willow the good news, and they celebrate. Back in court, Nelle pleads with the judge, who has made his ruling and tells her she can appeal at a later date for limited visitation. Nelle storms after Michael and Willow, and tells them while they may have won this round, as his mother she will always be a part of Wiley’s life. Michael and Willow depart, and Carly tells Nelle the judge made the right decision for Wiley because she doesn’t know how to parent and love, which she could never learn from Frank. Carly tells Nelle she’s lost Wiley and it’s all her fault. Carly takes off. Julian then tells Nelle it’s time to get this farce of a marriage annulled as there is nothing more he can do for her. She tells him she’ll be in touch and looks at her tracking app. 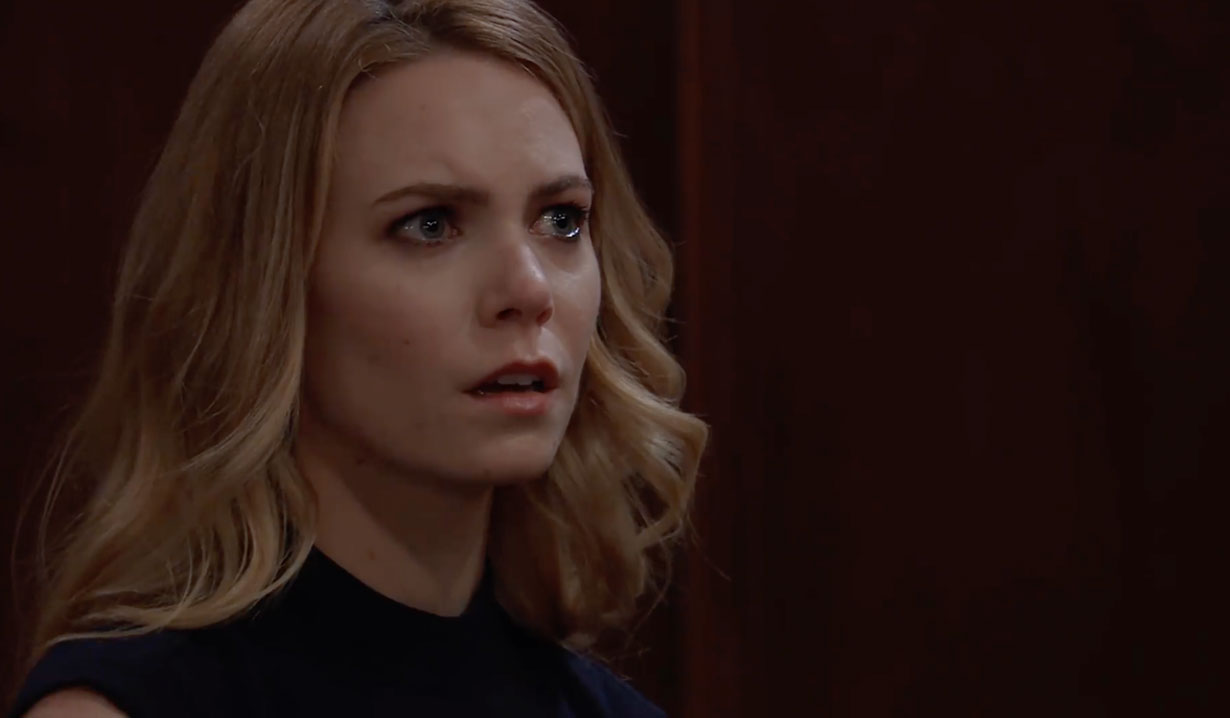 More: Who stands to threaten Michael and Willow’s marriage

Michael and Willow visit with Sonny and Mike at the hospital and give Sonny the good news about Wiley. Sonny is thrilled. 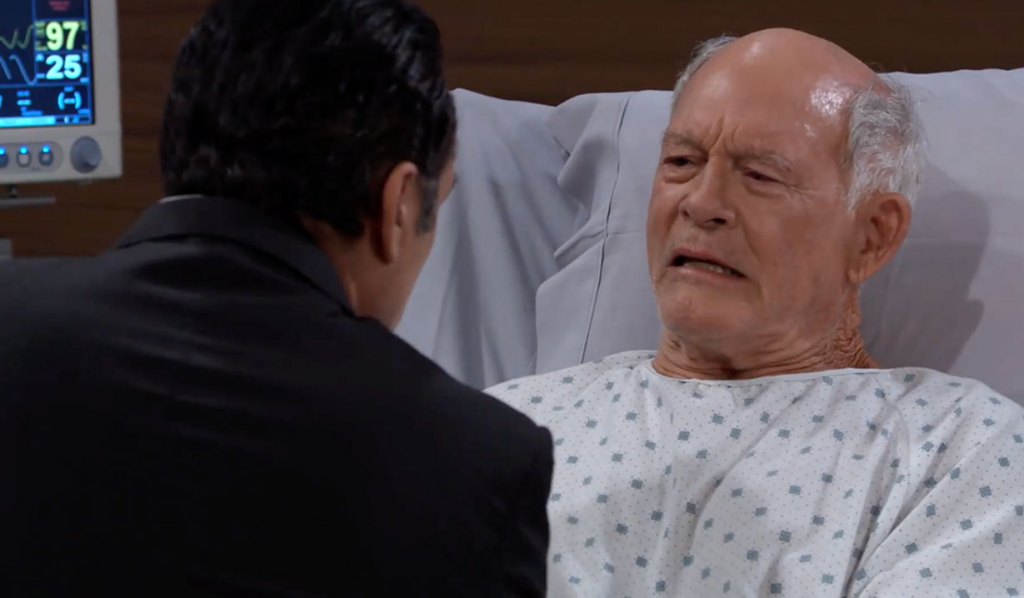 A woman offers Sasha a pick-me-up.

Lulu tells Sonny that they’ve given Renault a foothold into the hospital. 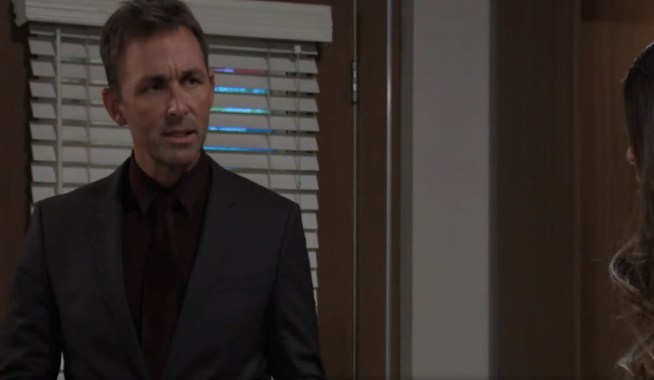 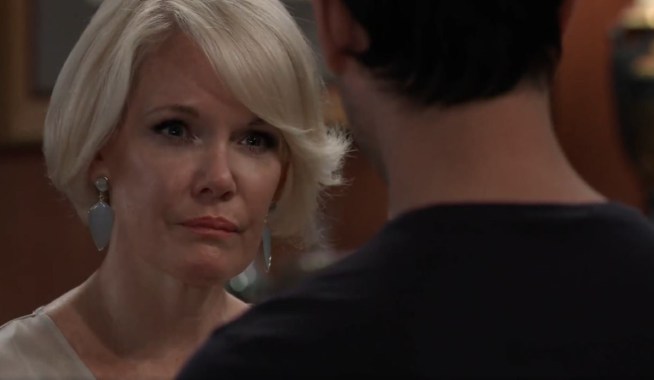