Sonny Chokes up Over an Unresponsive Mike 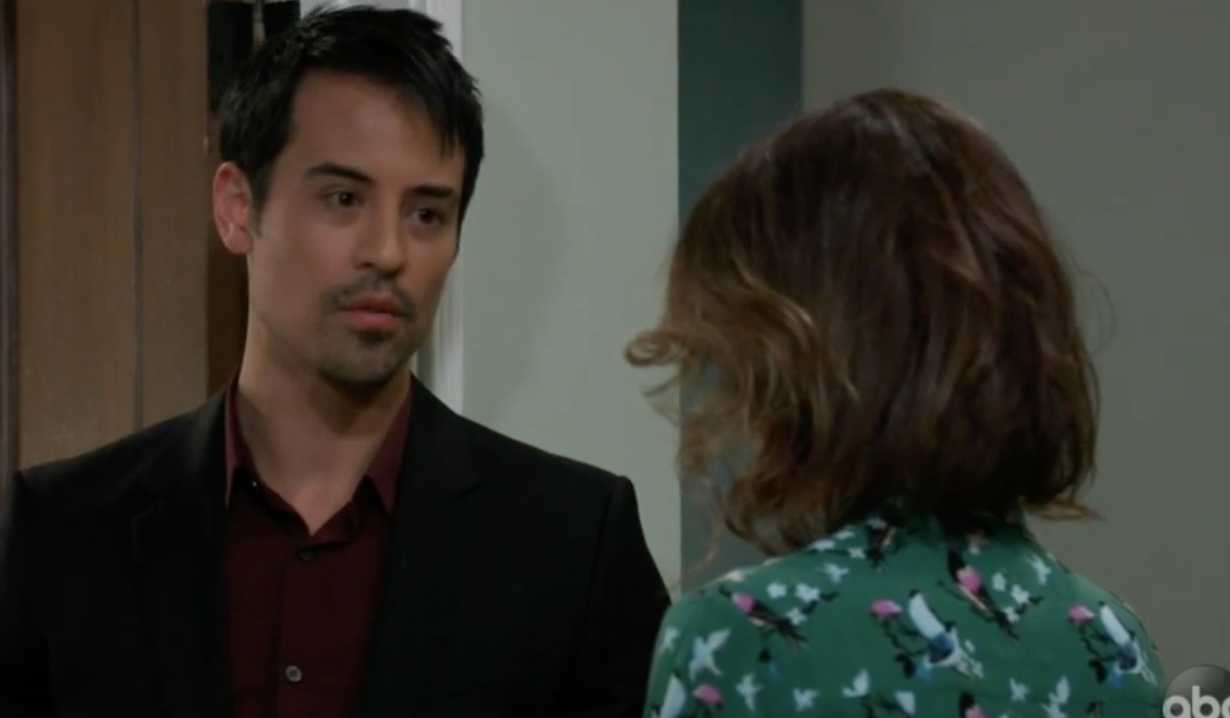 Julian tries to walk away from Sonny at the courthouse, but Jason blocks him in the doorway. Sonny wants to know why Julian married Nelle. Julian explains they joined forces to make a good home for Wiley. Sonny orders him to annul the marriage – now. Julian won’t do that just because Sonny wants him to. Sonny orders him to do what needs to be done before it’s too late. 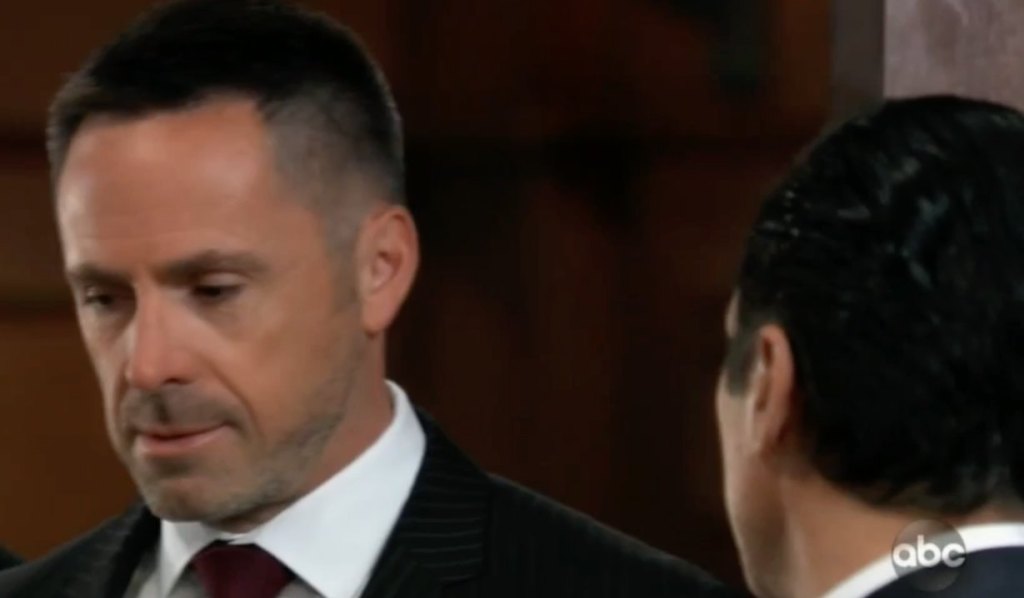 Franco brings flowers to Charlie’s for Elizabeth. However, she tells him over the phone she can’t make it. Franco apologizes for referring to her as not a real artist. She accepts and shares that she talked it out with Nikolas. After hanging up, Scott joins Franco assuming he did something to make Elizabeth mad. Franco brings his father up to speed. Scott reminds him of Liz and Nikolas’ history. He doesn’t think Franco should trust Nikolas, warning that when Ava drives Nikolas nuts, he’ll run straight to Elizabeth. Franco isn’t worried, but Scott reminds him letting his first wife Laura work with Luke at the disco went horribly wrong for him.

After hanging up with Franco, Elizabeth finds Nikolas in Mike’s room at Turning Woods. Nikolas shows an unresponsive Mike photos of Spencer. Nikolas urges him to hang in there so Spencer can visit him. Nikolas steps to the hallway to talk with Elizabeth. He explains he’s taking her advice and trying to be a better person. Elizabeth can see that. She tells him he made her feel better about Franco’s artist comment and then gripes about how Ava is exploiting Franco’s past. Nikolas counters it could be a start to a whole new venture for them. Elizabeth questions this, but Nikolas just thinks he noticed something between them. Talk turns to Spencer and Elizabeth again urges him to sacrifice his money for his son. Sonny and Jason show up. Elizabeth and Jason leave Sonny alone to ask Nikolas why he hasn’t responded to Spencer’s ultimatum. Nikolas says it’s not as easy as it sounds. Sonny spits that Nikolas dug his own grave when he married Ava. After Nikolas has left, Sonny sits with Mike and tells him about Wiley. He begs his dad to stick around. Sonny chokes up wishing they could continue making up for their lost years. Sonny asks Mike what he wants him to tell the doctors. Mike remains unresponsive. Sonny says he’ll come back tomorrow to ask him again. After he leaves, Mike reaches out his hand. In the hallway, Elizabeth explains to Jason Mike is done fighting. She believes he wants to let go, but is holding on for Sonny’s sake. Sonny returns to the hallway and asks Jason what he missed after Elizabeth leaves for work. Jason relays that Elizabeth thinks Mike is waiting for Sonny to let him go.

More: Why General Hospital should bring Dante back

Franco finds Nikolas working out at the boxing gym. Nikolas brings up seeing Elizabeth at Turning Woods. He wonders if it’s a problem for Franco that Liz has forgiven him. Franco assures him he has no problem and trusts his wife completely. The men get in digs about the other’s marriage before Nikolas talks about how excited he is to see Ava’s portrait. It will be a painting for the ages, with a party to match.

Franco brings the flowers to Elizabeth at the hospital. He tells her about Nikolas and asks how she would categorize her relationship with him. Liz takes the flowers and walks away.

At the Metro Court, Martin comes upon Diane, Michael, Willow and Carly discussing Nelle and Julian’s marriage. Barbs about the two arranged marriages and Julian’s past, as well as Carly’s are exchanged.

More: Photos of Sonny’s past & his biggest challenge 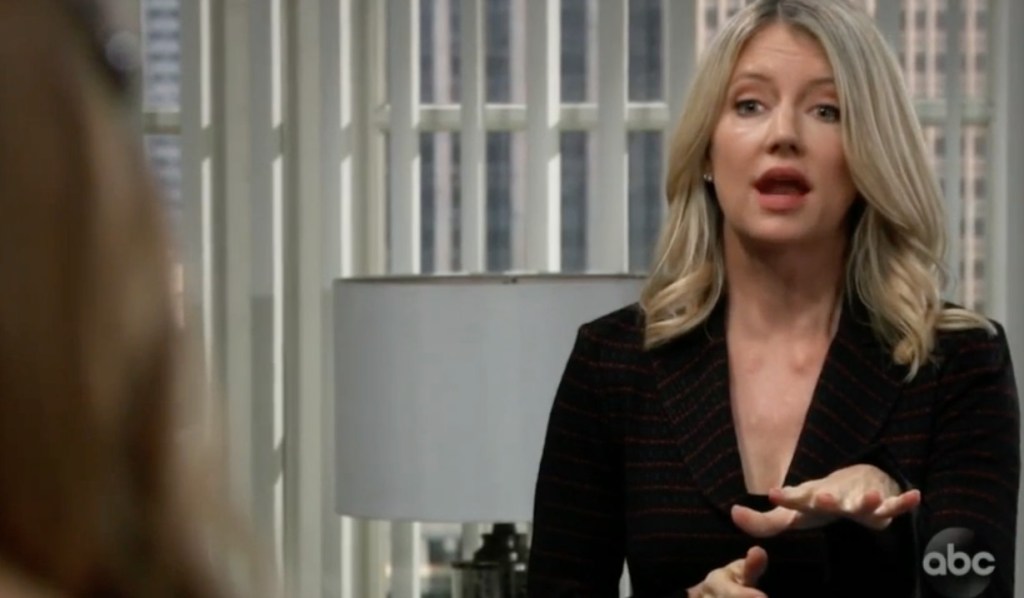 Nelle heads to Crimson to change out of her wedding dress and asks Nina about being her witness. Nina talks about trying to find her to find her own child and then wonders why Nelle was in a wedding dress. Nelle explains about Julian. Nina warns her about her new husband, but Nelle cryptically assures her Julian won’t make a move against her because if he does, it will backfire on him. Nina realizes Nelle is blackmailing Julian. Nelle thinks Nina should understand the lengths a mother would go to for her child. No one should take their children from them. Before Nelle returns to court, she tells Nina she really needs her and asks if she’ll come to court. Nina agrees to testify and hugs her.

Ava asks Nikolas what he will choose.

Michael is asked if he loves his wife on the stand.