Friday March 27, 2020: On General Hospital today, Cameron has his first therapy session, Ava poses for Franco, and Julian helps Alexis out when she needs it. 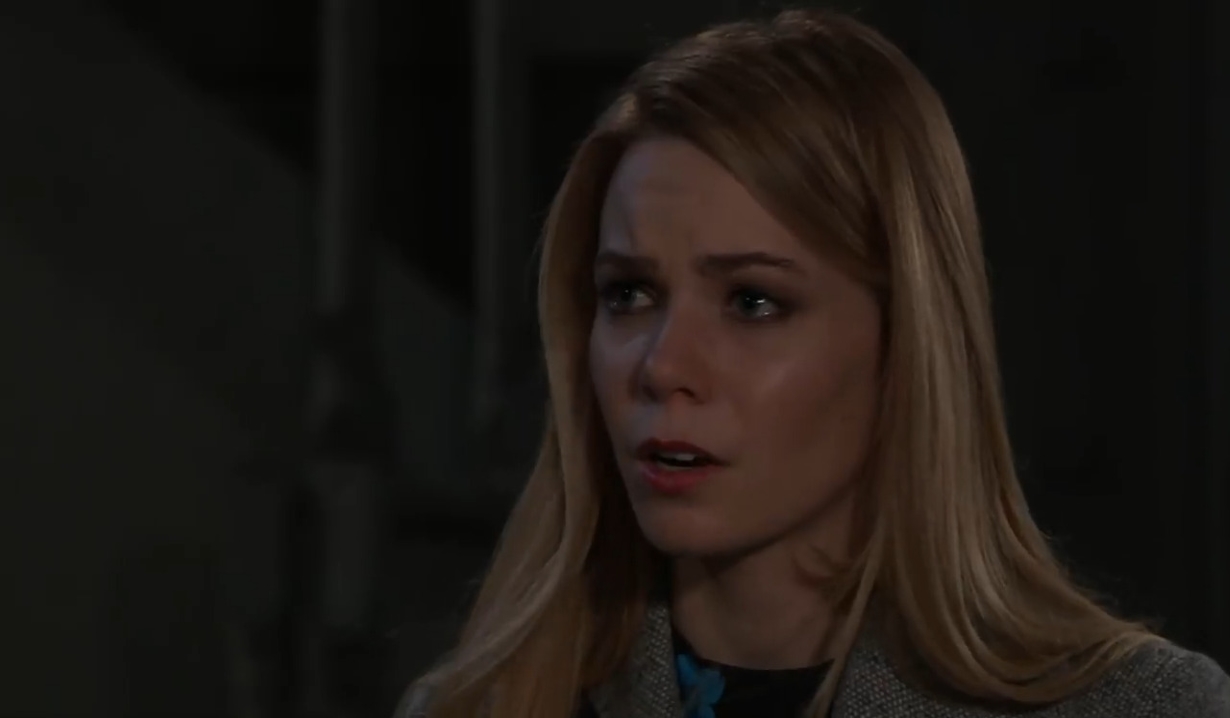 On the roof of General Hospital, Michael talks to Nelle about Wiley. She thinks their son should be at home, but he insists that his heart can be fixed tonight. She refuses to consent to the surgery and reminds him that she had a major operation she’s never recovered from. Nelle insists that they look for alternatives. Inside at the nurse’s station, Portia introduced Britt to Neil. He looks very familiar to Britt. Over at the elevators, Sonny arrives as Carly waits for him. Mike was brought in and he wonders what happened. Portia wanders over and explains that Mike has a sprained wrist and hasn’t said how it happened. She takes Sonny off to see his father. Michael wanders down the stairs to his mom. He informs her of Wiley’s condition and explains that Nelle is barring the surgery. Carly tells him to get Diane to look after the legal end while she deals with Nelle. She heads for the roof as Sonny returns. Michael fills his father in. They talk about father-son relationships and how hard they are. Back on the roof, Carly tells Nelle that she’s overplaying her hand. If Wiley dies, she loses all of her leverage. She urges her to sign the consent form and win some people over. “You do not get to win,” Nelle tells her. Carly leaves, locking the door. Nelle starts yelling. 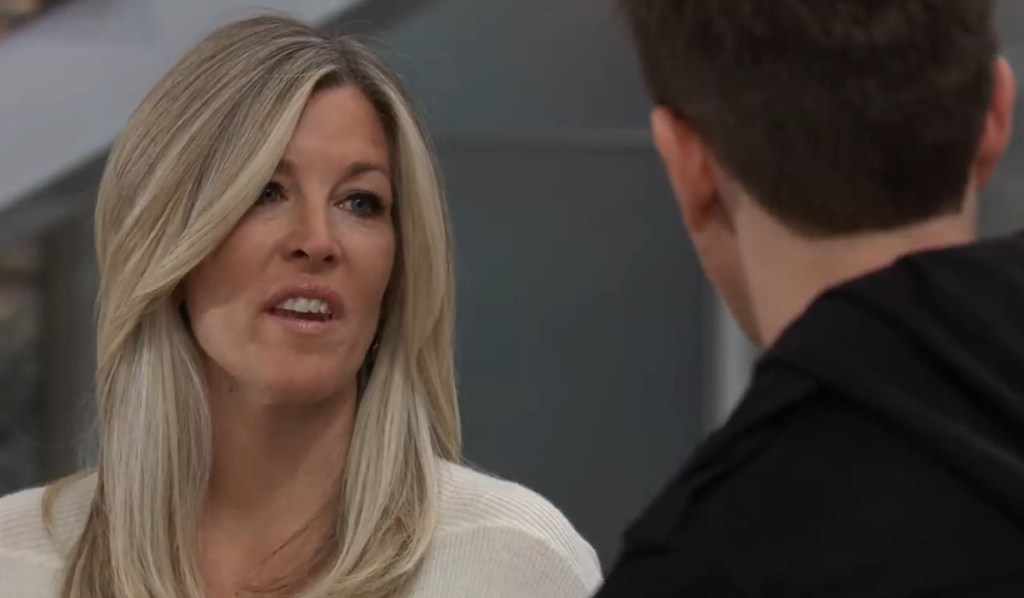 In his office, Anna admits to Finn that he may have gone overboard buying party decorations for Violet. He tells her everything feels good and they are a family. As they exit, Britt approaches them in the doorway, telling Anna that Obrecht has a lot to answer for. She explains that she’s been in touch with Peter the whole time she’s been away and asks about Jason’s suspicions. Anna insists that evidence clears Peter. Once Britt leaves, Anna and Finn talk about Peter’s bright future. The doctor thinks their future looks even brighter. In Franco’s studio, Nikolas teases Ava as the artist arrives. The Cassadine wants to stay to watch but they make him leave. As Ava poses, she talks about Trina. Franco says she’s lucky to have Ava around. He knows she messed up a lot with Kiki, but he also helped give her strength and confidence. She’s moved when he says he’d be happy to have her in his corner. Meanwhile, Cam walks the halls with his mom, reluctant for another therapy session. Liz insists this will be the last time if Dr. Byrne signs off. She leaves him in Neil’s office. Cam tells the doctor he’s fine. The shrink points out they have an hour, so he gets Cam to tell him the whole story. He goes over all the details and Neil points out that he put his life on the line for a friend. Meanwhile, Nikolas runs into Liz in the hallway. She admits that she’s worried about her son and what he’s going through and hopes it’s not like what she went through when she was raped. It’s just a relief to see that he has friends to help him through it like she did. She returns to Neil’s office as his session with Cam ends. They make arrangements to meet next week. 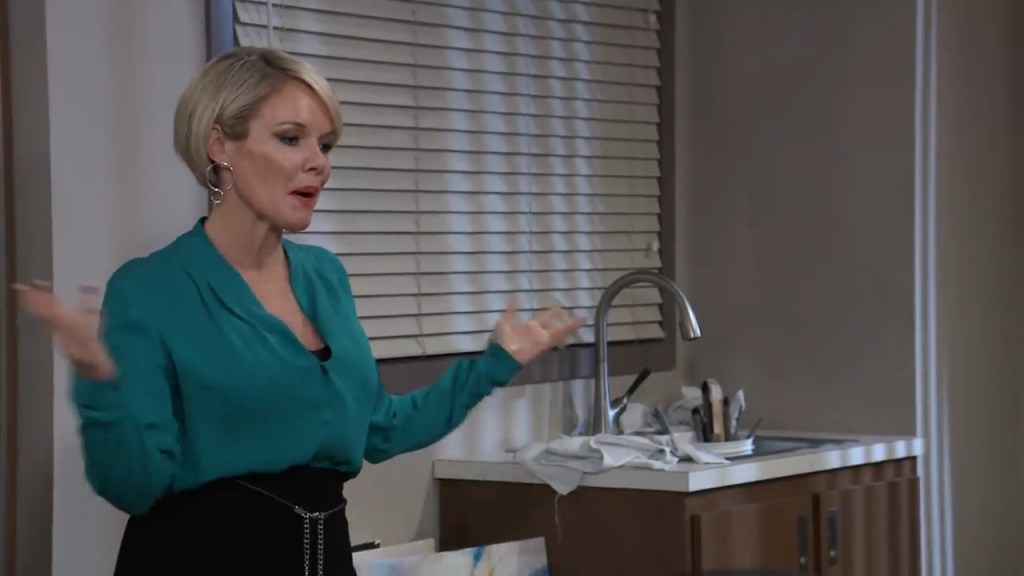 At the bar in Queen’s Point, Alexis has a second shot of vodka. Before she can drink it, she tries calling Finn, but he doesn’t pick up. She calls Molly, who also isn’t around. Flipping through her phone, she looks for someone else to call. Soon, Julian arrives and drives her home. 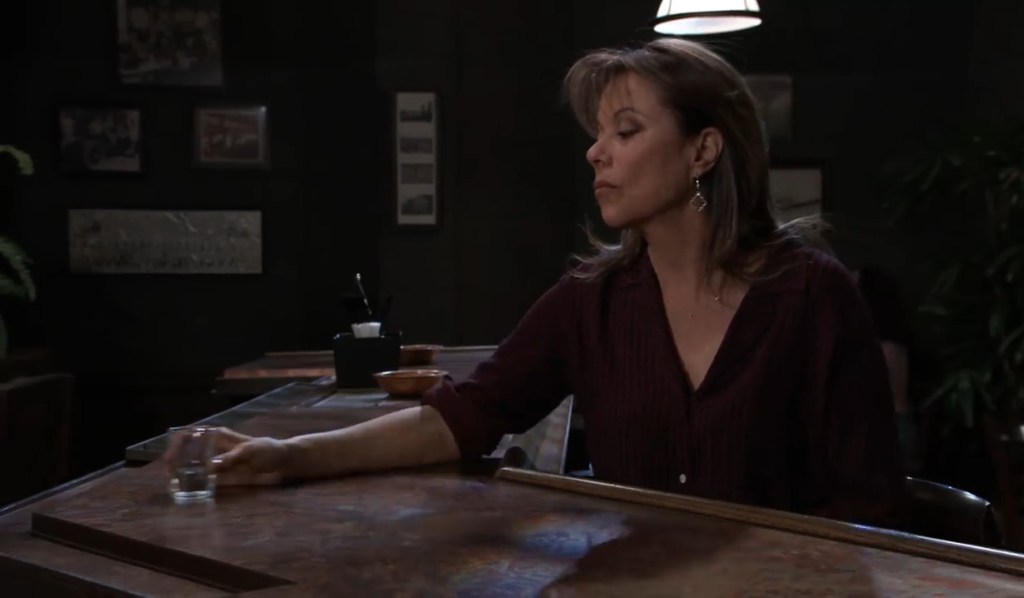 Alexis sits with Julian in his car and confesses that she had a drink, but only one. She has no idea why. He doubts that. She admits that she had a huge fight with Sam. Defensively, she insists this isn’t about Neil and this is all on her. She sabotages herself. Julian decides to take her to an AA meeting. After he drops her off, he picks up Britt. He offers her a meal but that’s not what she wants.

In the Corinthos kitchen, Joss talks to Trina about how traumatized Cam must be. She realizes Trina must be suffering too. Trina insists acting normal is what’s best for her. She suspects Cam is more messed up than he’s letting on. He keeps texting her. As Joss talks about how great Cam is, Trina thinks of kissing him. Portia arrives to pick up her daughter. 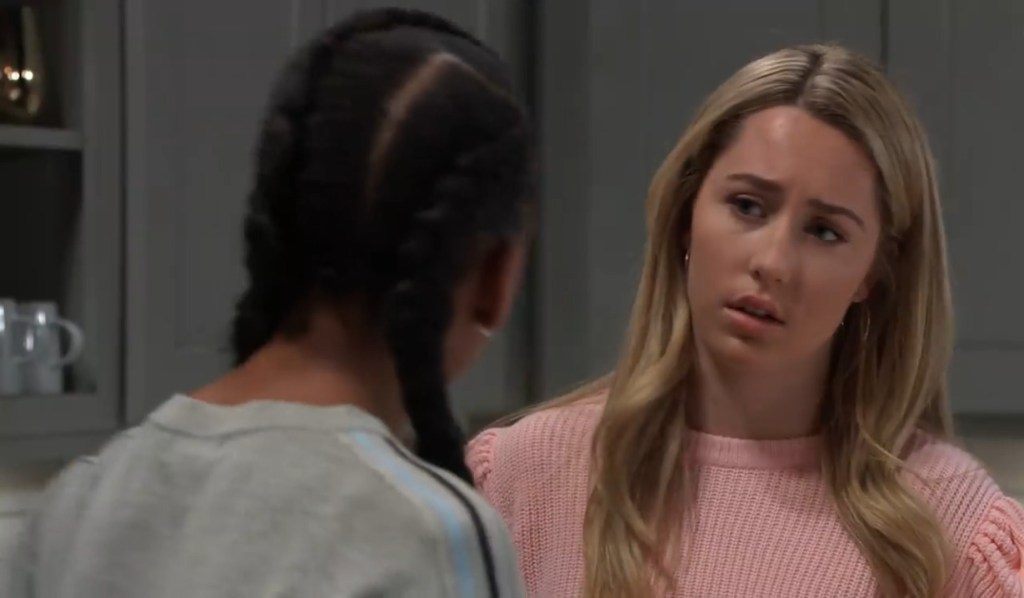 Monica has some positive news.

After an Argument With Sam, Alexis...