Monday March 23, 2020: On General Hospital today, Britt starts work at General Hospital, Sonny and Jason have a realization about Jordan, and Violet doesn't want to be involved in Anna and Finn's wedding. 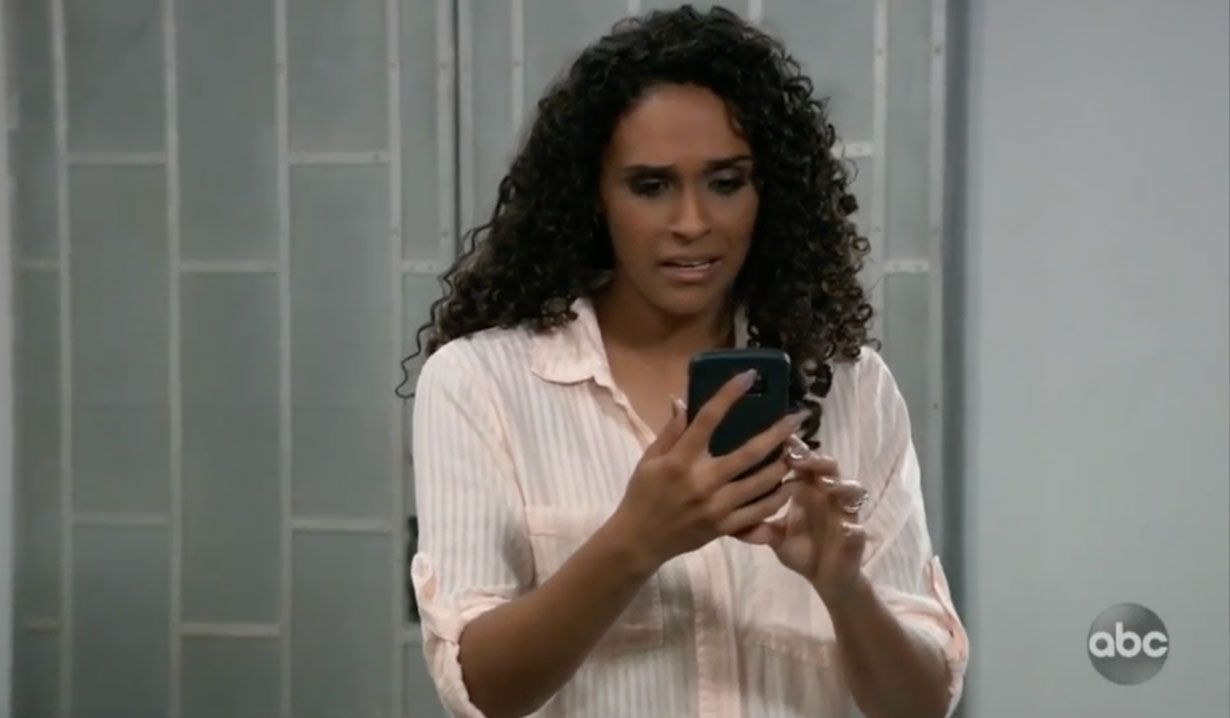 Franco sketches at Kelly’s and is approached by Britt, who apologizes for her mother trying to kill him. Franco is entertaining the possibility Obrecht is innocent because she’s been a loyal friend to him. He doesn’t see her doing anything to jeopardize her place in James’ life. Britt admits her mom soften when she claimed Nathan as her son, but also feels her mom could be guilty to hide her past crimes. 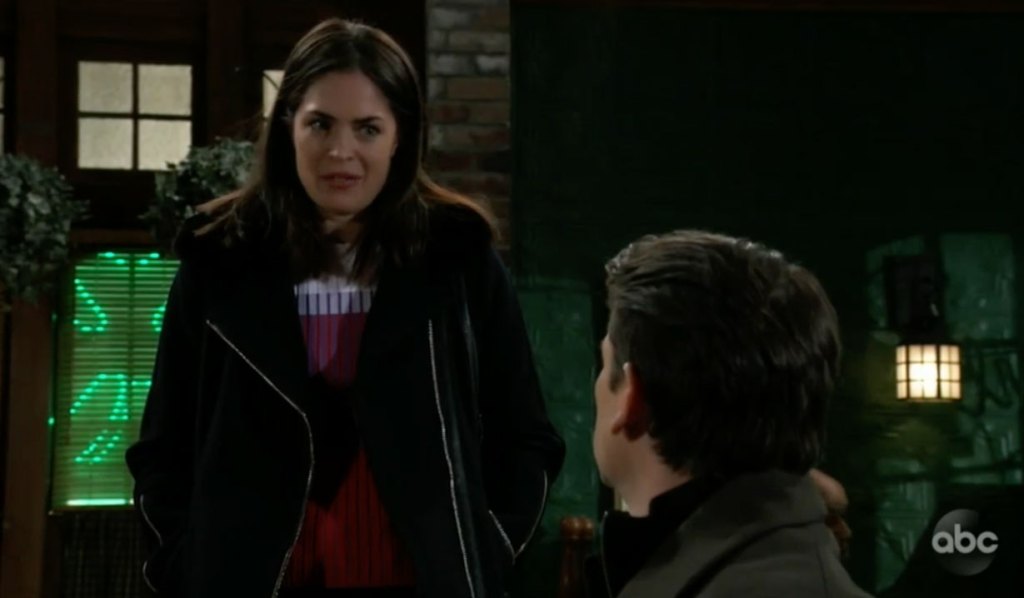 Peter surprises Anna, Violet and Finn at home with pastries for breakfast. Violet invites Peter to her birthday party. He accepts and excuses himself to get to a meeting. Violet goes to play in her room and plan her party. Anna brings up their wedding to Finn and suggests including Violet in the ceremony, which Finn thinks sounds perfect. Violet returns and Anna and Finn tell her about their plans to have her in their wedding. She tells them no thank you and that she doesn’t want another mommy. Anna excuses herself as Finn tells Violet that no one will ever replace her mommy, and her heart is big enough to love many people. Anna returns with a birthday invitation she made for Violet to send to her mommy. Violet asks if she can come to the wedding too. Finn says she can ask anyone she wants. 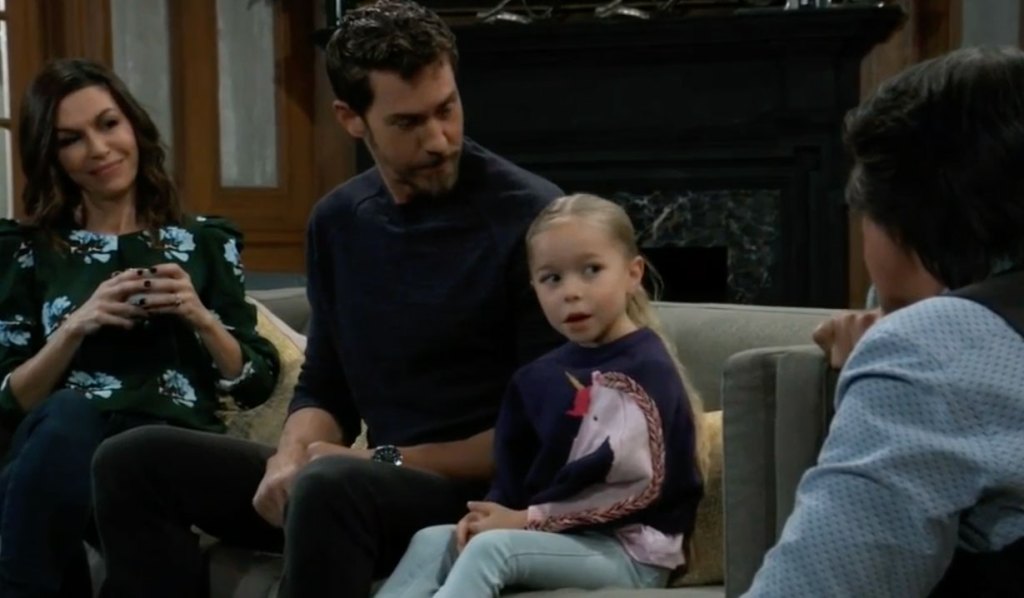 At Metro Court, Ava and Nikolas order breakfast. Ava has a sitting with Franco and suggests he tag along and visit Liz. He doubts she wants to see him given he can’t locate Hayden. Ava pushes him not to give up on Liz, because she thinks they would make the other less miserable if they each had friends to lean on. 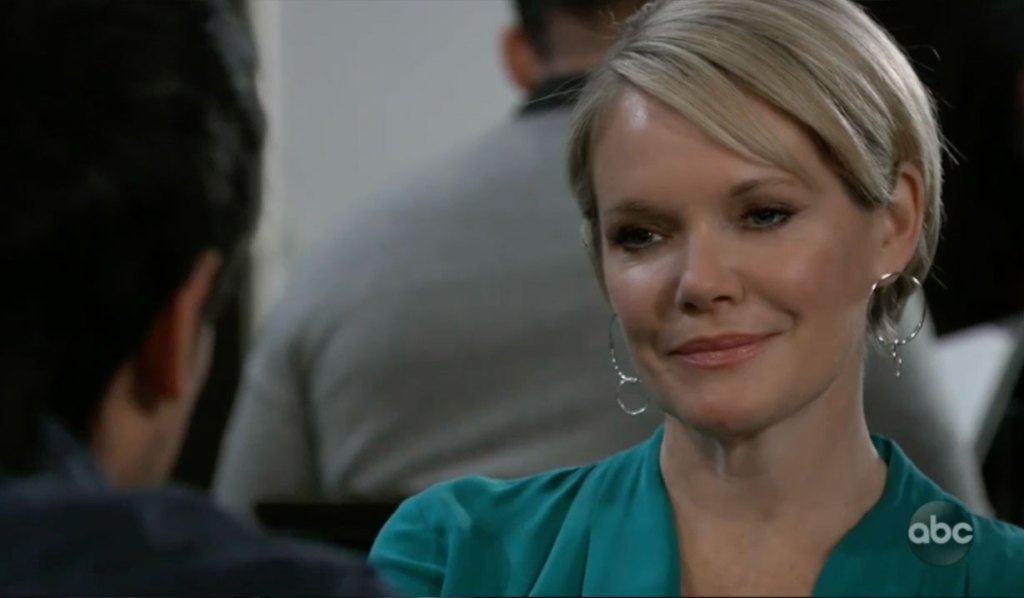 At the Corinthos estate, Sonny rants to Jason that Cyrus was able to get a shipment of drugs through last night and into his territory. Jason makes a call to their man at the PCPD to find out what’s been happening and recalls Sam telling him that TJ’s gone off the grid. Jason gets a callback and relays to Sonny that Jordan gave the order to move the men last night. Sonny thinks this is no coincidence.

At her place, Jordan gets a text of another photo of TJ and calls Harmony to ask where her son is. Curtis enters and asks Jordan to breakfast, but she can’t go. Sam appears at the door and was hoping Curtis could join her for breakfast so she can pick his brain, so he accepts. He excuses himself to get ready, and Sam questions Jordan about TJ. Jordan tells Sam she still hasn’t found TJ, but knows he’ll come home when he’s ready. Curtis and Sam head out, and Harmony arrives without TJ. Harmony tells Jordan that Cyrus is pleased, but he’s not done with her. Harmony tells Jordan she needs to get Cyrus out of prison because that’s the only way he will free TJ.

Back at Kelly’s, Peter enters, and Britt is happy to see him. He pulls up a chair and they all ponder whether Obrecht is guilty. Britt is convinced her mother is guilty to cover her tracks of being involved with the original memory transfer involving Drew. Britt departs, and Franco and Peter continue to talk. Peter believes Obrecht is so broken she can’t be fixed, and Faison is still controlling her from the grave.

At General Hospital, Liz and Felix worry about Lucas, who is throwing himself into his work. Liz fears he’s heading for a breakdown Later, Britt arrives in scrubs and a lab coat, and reveals to Felix and Liz her license was restored months ago, and she’s been temporarily hired to replace Kim Nero. Felix thinks she’ll last at most two weeks. Nikolas and Ava arrive, and Nikolas is happy to see Britt. She slaps him what for he’s done to Spencer and says it would serve him right if his son never spoke to him again. Liz tells Britt to stop acting so high and mighty, and Nikolas has beaten himself up enough. Britt isn’t surprised she’s defending the prince and accuses her of having a weakness for the one who got away. Later, Nikolas thanks Liz for defending him, but she admits doing so was against her better judgment. 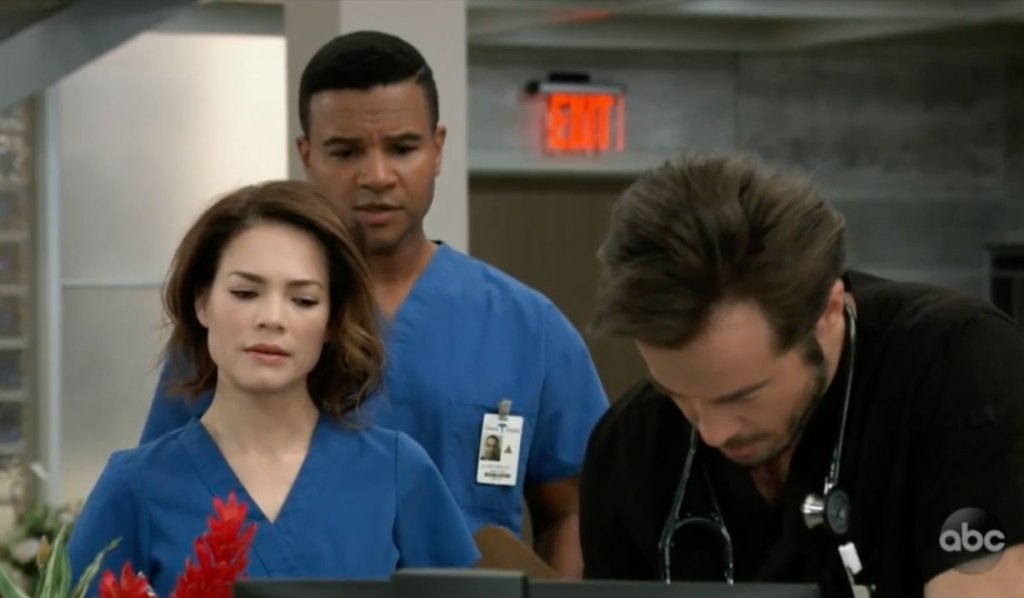 Curtis and Sam arrive at the Metro Court for breakfast, and Sam brings him up to speed on her search for TJ and giving Jordan the location of his traced cellphone. He’s troubled but says TJ will come home when he’s ready.

Curtis returns home and confronts Jordan and demands she tell him what she’s hiding about TJ. As she breaks down, Sonny and Jason arrive, and Sonny knows Cyrus has TJ.

Maxie Quits Crimson While a Brawl...

After Ned Fires Brook Lynn, She...