Tuesday March 10, 2020: On General Hospital today, Portia recognizes Curtis, Laura is wary of Ava, Brad is a bundle of nerves before his arraignment, and Michael and Sasha talk marriage. 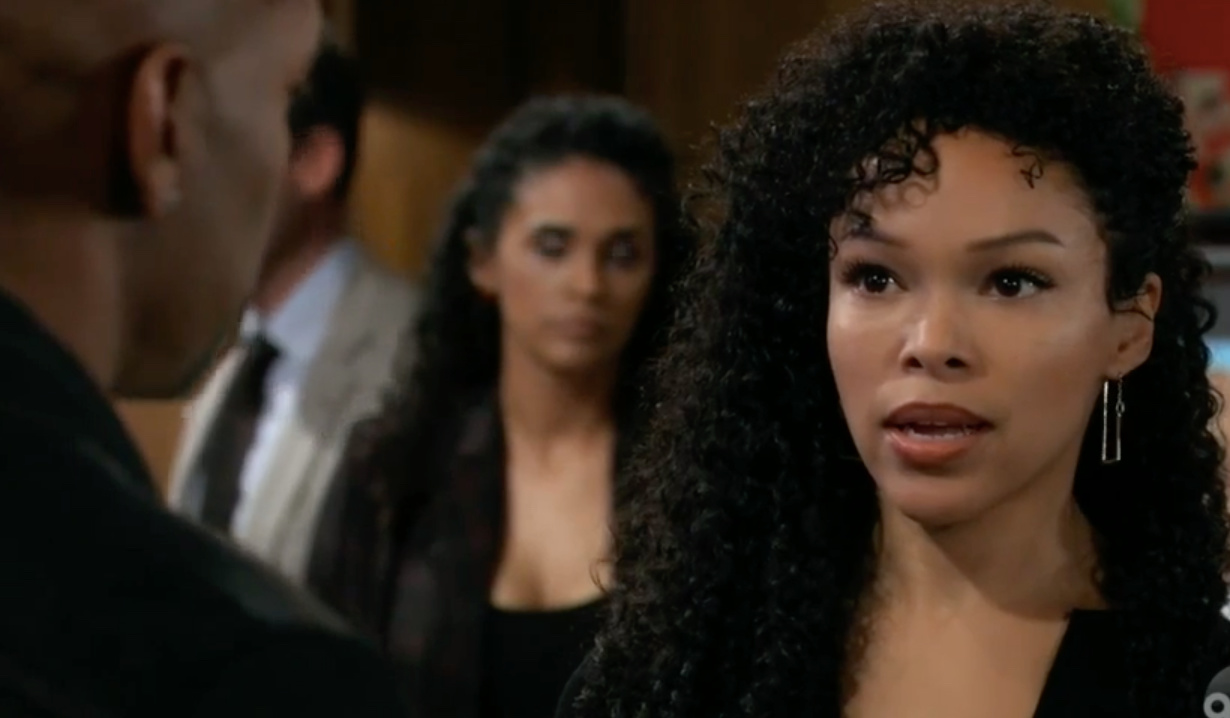 Laura runs into Curtis at General Hospital. He just finished giving blood, which he feels is a good way to counteract the recent bloodshed. Laura doesn’t think he should beat himself up over Taggert’s death and invites him to the memorial at The Floating Rib. Curtis thinks that’s the last place he should be, but she reminds him he was there for Taggert when he needed him most by taking care of Trina. Near the elevators, Ava finds Julian who is looking for Lucas. She realizes he’s nervous Brad will give him up considering he’s being arraigned today. Ava reminds her brother that Sonny can’t find out he helped Brad keep the Wiley secret. 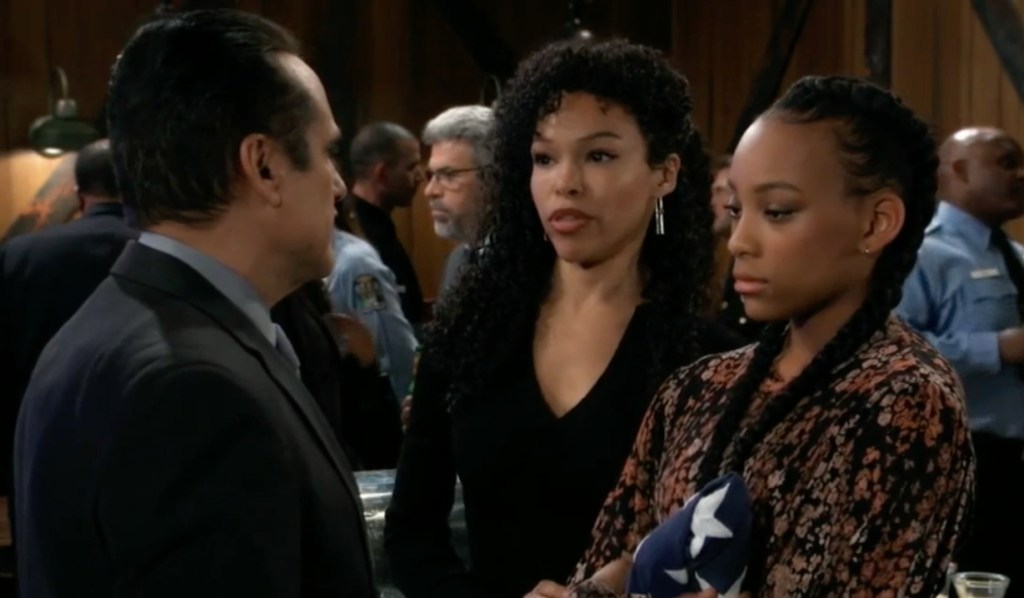 Cam shows up for Trina at Taggert’s memorial at The Floating Rib. When Mac asks if anyone else wants to say anything about Taggert, Sonny walks in. Jordan reminds The Don the service is for family and cops only, but Sonny tells the room despite their differences, he respected Taggert in the end. He then offers his condolences and assistance to Trina and her mom. Sonny leaves, but Joss stays behind for Trina, who knows Sonny and Taggert respected each other. Trina hurries over to embrace Ava when she walks in. Jordan notes the looks between Ava and Portia who walks away. Jordan follows her. Portia confesses she loved Marcus but the job always came first with him. Back at the bar, Trina sees Curtis who has entered with Laura. She blames him for her father being gone and wants Curtis to leave. Portia returns and recognizes Curtis. Laura extends her condolences and explains it was her idea for Curtis to come. He stands by awkwardly. Trina yells at everyone for making nice to the man who is the reason her father is dead. She runs out with Joss and Cam following to console her. Portia apologizes to Curtis for Trina, but Curtis has been thinking everything Trina accuses him of. Portia notes it’s been years since they’ve seen each other. Curtis nods and says he’s sorry for her loss. He walks away as Jordan watches them. When Jordan and Curtis connect, she asks why he never mentioned he knew Trina’s mother. He didn’t know they were related. At the bar, Ava tells Laura and Liz Nikolas is just moping around Wyndemere. She asks if Liz and Franco would join them for dinner some time. Laura looks at her suspiciously and alone warns Liz Ava and Nikolas are up to something. Portia bristles as Ava joins her and Trina to tell Trina to take her time coming back to her internship. Across the room, Jordan gets a text from TJ who says he needs time to think things through alone. 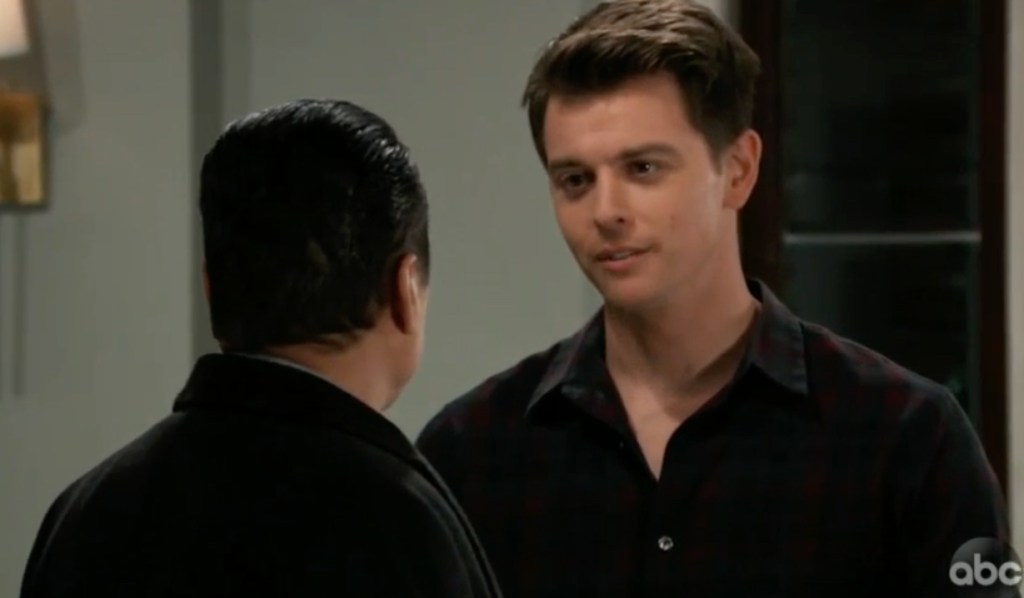 At the Quartermaine mansion, Michael tells Sasha Diane suggested he get married in order to bolster his custody suit. Sasha asks what he thinks about it. Sonny stops by. They talk about fatherhood and Brad’s arraignment. Sonny tells his son not to worry. Things have a way of working out. Sasha returns after Sonny has left. She asks again about the marriage issue. Michael has no interest in creating an insta family out of convenience. If marriage is in the cards for them, he wants it to be for the right reasons. She agrees they can’t let anyone else dictate how they live their lives. They both look pensive as they hug. 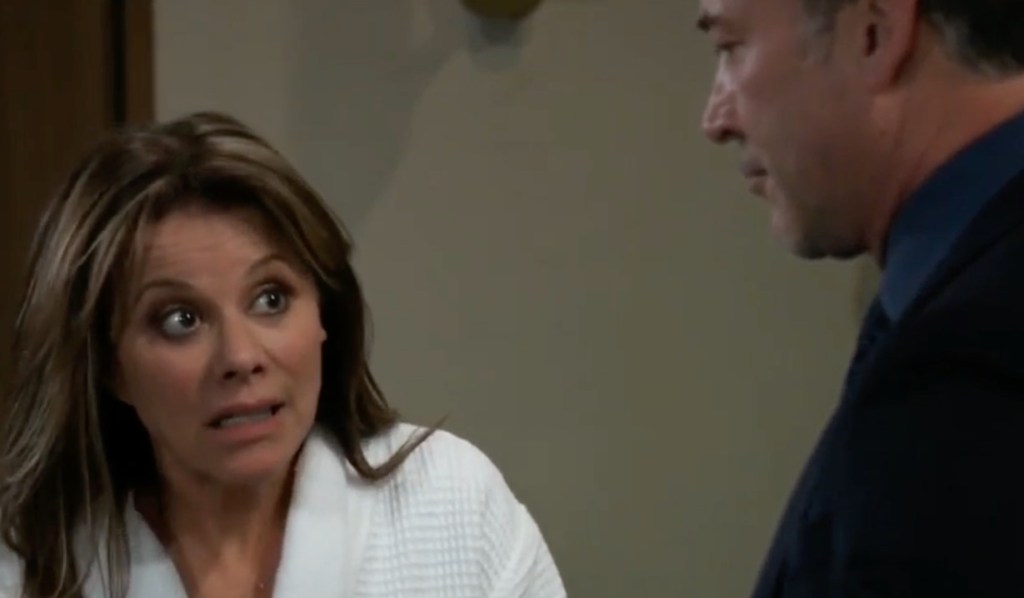 Alexis and Neil wake up together in her hotel room. They agree the night was great, but Alexis is worried about his hearing. Neil wants to tell the board they are more than friends. Alexis implores him not to put his career on the line. No matter what happens today, Neil doesn’t regret what happened last night. He gives her a deep kiss before exiting.

Alexis and Neil meet with the review board. Alexis pleads Neil’s case by explaining how he helped extricate Kristina from Shiloh’s cult. She insists he is a good therapist who helps people – sometimes in session and sometimes as a friend. The board asks about the exact nature of their relationship. She insists it’s purely professional.

At the courthouse, Scott meets with Brad to go over his case. Brad insists the baby switch was all Nelle’s idea. Scott asks if anyone can corroborate his claims. Julian enters to talk with Scott alone. They step to the hallway revealing Julian is paying Scott who thinks someone else was involved in Wiley’s kidnapping. When alone with Brad, Julian orders his son-in-law to stick to the script. He’ll take care of the rest. After Julian has left, Sonny enters. Brad nervously asks what Sonny will do to him.

Finn Apologizes to Peter for...

Neil Is Allowed to Keep His License...