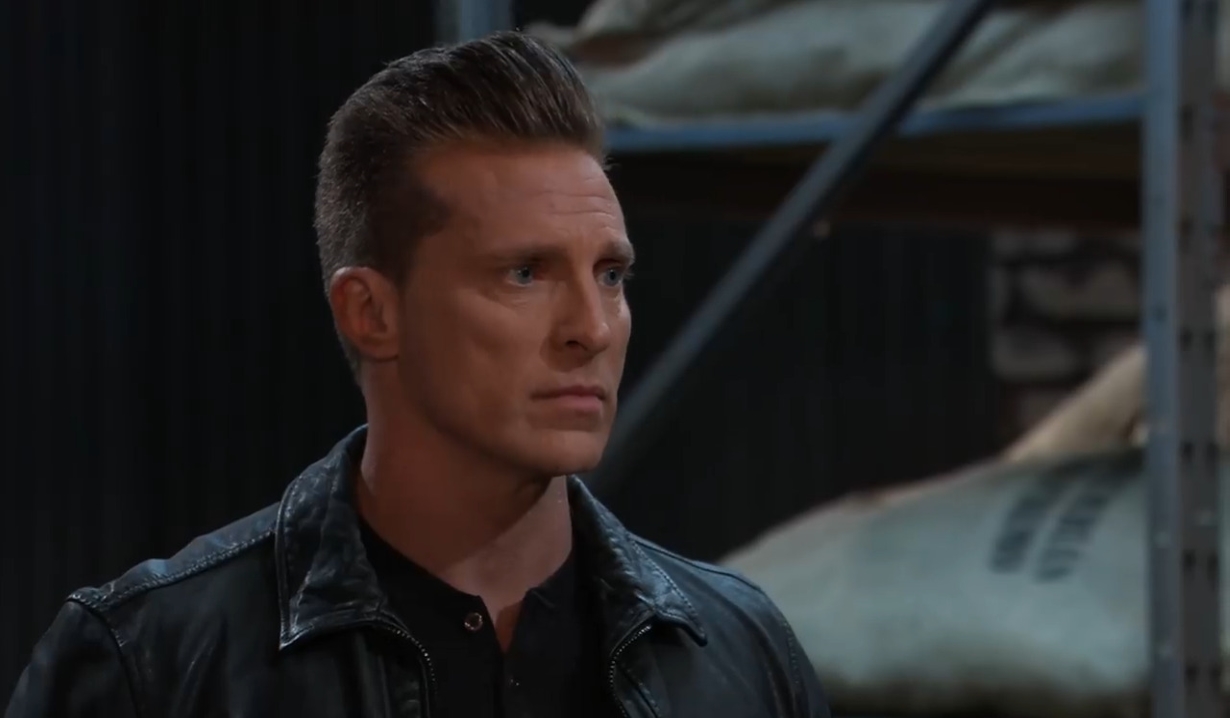 Frazzled Jordan nearly shoots Gladys when she walks into the Corinthos coffee warehouse. Gladys notices that bloody Brando is on the floor after being shot. Carly is looking after him and tries to calm Gladys as well. Jason arrives and Jordan says he has a lot to answer for. Gladys and Carly leave as the ambulance takes Brando away. Jordan interrogates Jason about the shooting and suggests it was part of a coordinated attack on Sonny. She asks who targeted Sonny in Brooklyn.

At General Hospital, Finn confronts Nikolas for making Hayden abandon her child. The prince assures him that Hayden will come back. The doctor promises he won’t get away with what he’s done. Down the hall, Chase visits Joss in a room and questions her about the shooting. Meanwhile, Jax apologizes to Liz for enabling Nikolas and what he did to Hayden. He explains that Valentin isn’t the one who forced her sister into hiding, Nikolas is. The prince staged the attack that forced her to flee after he’d learned she betrayed him. Liz thinks this is despicable. As soon as Nikolas appears, she slaps him. Jax gives them some space. Liz tears into Nikolas. He makes excuses. Jax goes to Finn and tells him he would have stopped Nikolas if he’d known what he was doing. A few feet away, Chase threatens to arrest Sonny’s men as they patrol the entranceway. They file out. Back across the room, Joss and Jax run into Gladys as she worries about Brando. She explains he was shot saving Carly, who immediately rushes in. Her daughter tells her about Laura getting shot. Jax takes Carly aside and starts quizzing her about all the shootings. She doesn’t know what’s going on and asks him to take care of their daughter. Carly is determined to find out how Brando is involved in this. When she is left alone with Gladys, Carly tries asking her why she claimed Brando was dead. Gladys spots Finn and rushes over to ask about her son. He tells her it’s miraculous the bullet didn’t hit anything. Gladys goes off to see the wounded man. Carly snoops through an evidence bag as a cop’s back is turned and snags a photo. 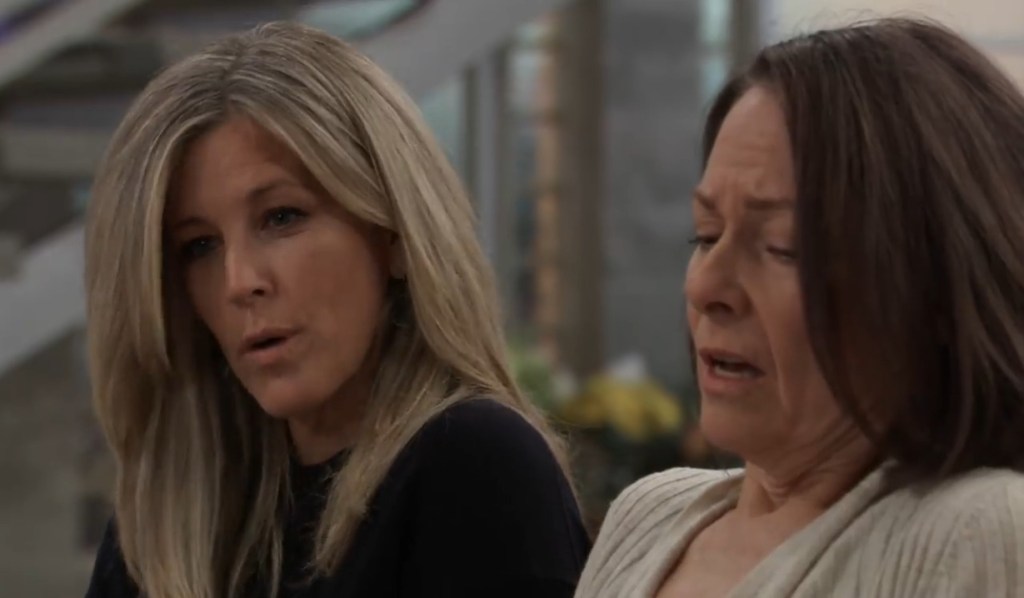 Michael and Sasha arrive at the Corinthos compound. Guards are patrolling and Dev asks what’s going on. Michael fills him in about the warehouse shooting. Dev starts to panic. Trying to calm him down, Michael suggests he watch a movie with Avery. Once Dev heads upstairs, Sasha notes that calming someone’s fears of being murdered seems to come a little too naturally to her boyfriend. She tells him how terrified she was tonight. He explains that he’s learned to handle situations like this. Distraught, she admits she doesn’t think she can go through this again. He assures her she won’t have to. Soon, Jax brings Joss home. Dev is relieved to see she’s okay. He’s less relieved when she tells him that his supposed father was shot but is still alive. 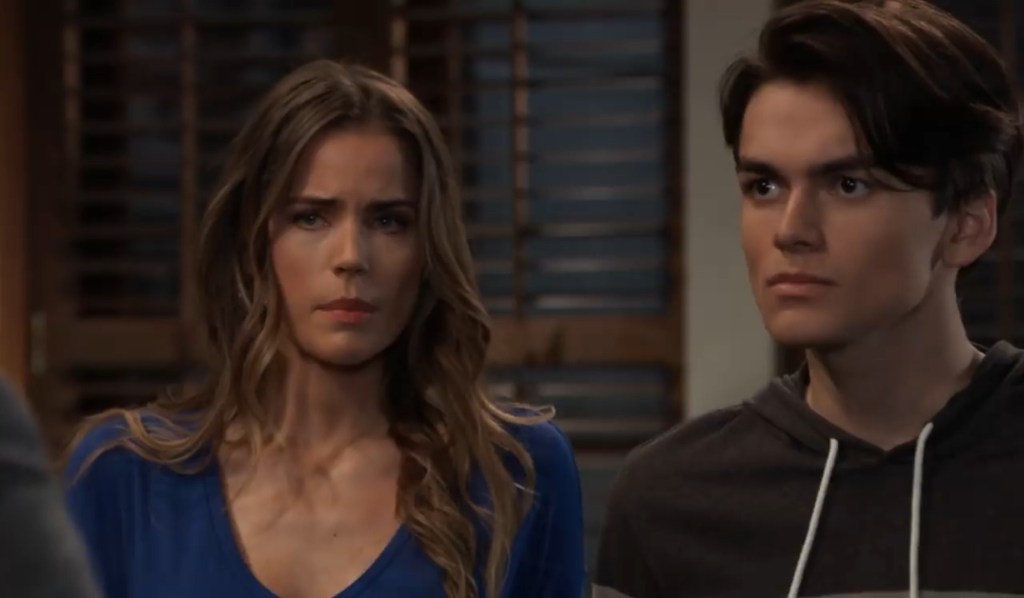 At Crimson, Ava sneers at Valentin while he vows to Nina that he will get back everything that he’s lost, including her. He tells Nina that he will always want her and their life with Charlotte. She says that life is long gone, and she helped Ava take him down. Valentin repeats that he loves her and Ava lays into him, saying he can beg all he wants but he doesn’t know a thing about love. He claims he never knew love until he got involved with Nina. Nina is tired of listening to both of them and asks them to leave. Before Ava can go, Nikolas pops up and hands Valentin a restraining order to keep him away from Wyndemere. He’s also ordering a DNA test. Valentin tells the prince that Helena is playing him from beyond the grave and he is the true heir. He and Ava trade some more barbs and he exits, telling Nina he will see her again. 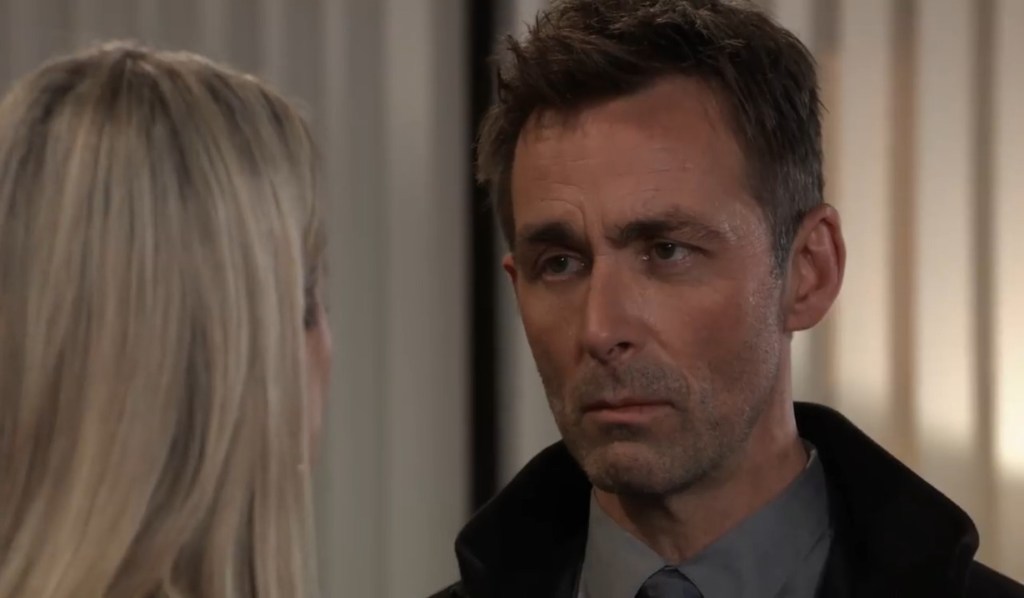 Chase joins Jordan and Jason at the warehouse. The cops question Mr. DeMarco, who tells them about Brando recusing Carly. She leaves Chase to question DeMarco and takes Jason outside. Jordan points out the gunmen were either incompetent or something more complicated has been happening. Jason says nothing. Taggert arrives to offer his help. Chase joins them to say the preliminary findings match DeMarco’s story. Jordan tells Jason that she has questions for his boss. She warns that whoever is coming after him doesn’t have a code and this could get ugly. She won’t hesitate to go after him and Sonny.

Sonny goes to the hospital.

Nelle tries to get through to Brooke Lynn.

In the Aftermath of the Shootout,...

Gladys Explains to Carly and Sonny...