Tuesday January 7, 2020: On General Hospital today, Nina leans on Jax, Lulu is frantic, Laura worries for her son and Gladys is curious. 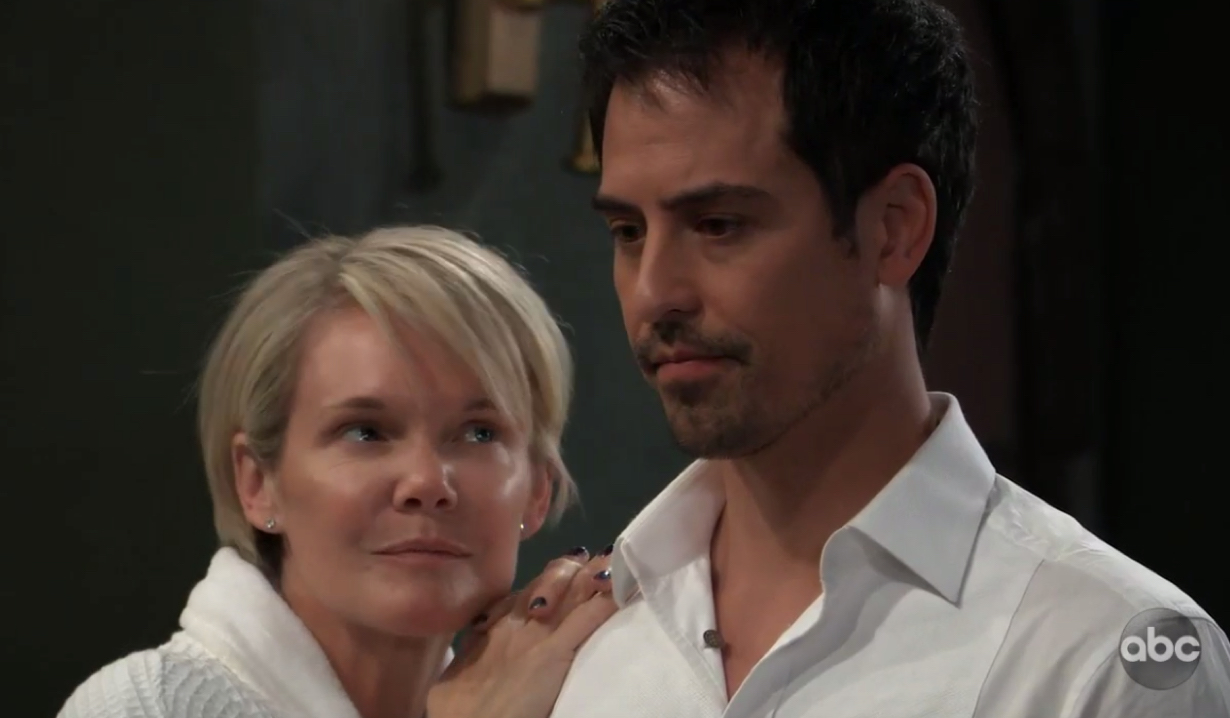 After changing out of her wedding dress, Nina joins Jax in the main room at Wyndemere. She admits she should have listened to him – revenge tastes as bad as he said it would. Curtis and Jordan enter. Jordan has issued a warrant for 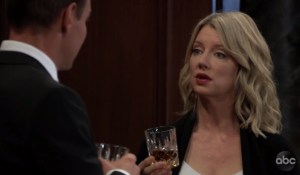 Valentin. Nina has to get out of there and exits, with Jax following behind. In another area, Laura and Lulu try to process Ava’s wedding announcement. Laura deduces Ava has the codicil and is holding it over Nikolas’ head. Nikolas believes he and Ava are a good match and hopes he gets his family’s blessing in time. Lulu won’t watch him make another bad choice and leaves to check on Charlotte. As Ava prepares for the wedding in a private room, Laura finds her and rants. She can’t believe Nikolas took advantage of Ava’s grief at Shadybrook. She never thought she’d say this but her son is acting like a Cassadine. Ava insists she and Nikolas are a good match. That’s what Laura’s afraid of and she won’t stay for the wedding. In the room where Charlotte is sleeping, Peter steps in to stop Valentin from taking the girl away. Valentin asks Maxie to take Charlotte to the hall so he can talk to Peter. Once alone, 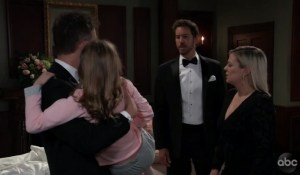 Valentin knees Peter in the groin, which sends him to the floor. Valentin runs out and whisks Charlotte away. Lulu arrives as Maxie helps Peter recover. Lulu runs off to have Jordan arrest Valentin for kidnapping. Valentin leads Charlotte to the main room, which is now empty, so they can sneak through the tunnels. Charlotte grabs Nina’s flower bouquet to take with her, but a bud falls to the floor. Lulu runs into Jordan and Curtis as she frantically looks for Charlotte. Lulu finds the flower that dropped and realizes they went through the tunnels. Kevin finds Nikolas alone in the main room. Nikolas asks about Spencer. Kevin tells him to do the right thing and call him. Laura finds them and learns Spencer didn’t answer Nikolas’ call. Nikolas implores his mother to stay for the wedding. She believes he’s making a mistake and she can’t be part of it. After everyone has left, Ava and Nikolas get married in the main room. They seal it with a kiss.

Jax and Nina sit at the coffee shop. He tells her he booked a room at the Metro Court for her. They discuss the night’s events. She wasn’t sure if she was going to confront Valentin or marry him. Jax thinks Nikolas barging in was a blessing in disguise then. It doesn’t feel that way to Nina. When she asks, Jax explains his past with Nikolas. Jax doesn’t think good prevailed tonight though. He urges her to let the Cassadines make their own misery. She has better things to look forward to.

Anna and Finn take a stroll by the skating pond at Midnight while Chase and Willow watch Violet. Mac and Felicia happen by. Felicia asks Finn about Violet, as Mac brings up the file Anna asked him for. He thinks the sooner they find out who 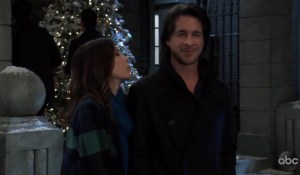 wanted Andre and Franco dead the better. Anna stutters as she says she didn’t find anything actionable in the file. Finn overhears and looks perplexed. Later, as Valentin rushes Charlotte through the park, he bumps into Anna who asks about the wedding. He says it didn’t happen and they’re going to find a place to regroup. Lulu, Jordan, and Curtis find them and demand Charlotte. Valentin refuses. As they face off, Nina and Jax approach. Anna implores Valentin to not make things worse for his daughter and let Lulu take her. He relents. Nina tears up as she watches Valentin say an emotional goodbye to Charlotte. Jordan arrests Valentin for fraud. 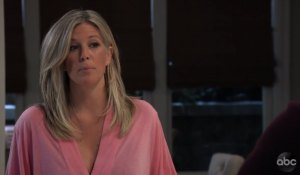 After getting off the phone with Jax, Carly tells Sonny in their kitchen about what happened at the wedding.  Now that everything is in the open, Sonny wonders where that leaves the two of them. Carly thinks they have more important things to focus on, as Gladys joins them. As Carly reminds Gladys the holidays are over and she can leave, Sonny’s henchman enters to pull Sonny outside. He tells Sonny one of their trucks was hijacked but it was found on the side of the road. Sonny tells him to leave it because the cops will only find coffee. It’s good to let them believe he’s a legitimate businessman. Sonny returns to the kitchen and a curious Gladys.

Sonny has a surprise for Gladys.

Ava wakes up to Nikolas who holds a gun. He asks, “You looking for this?”

Lulu Prepares to Fight Valentin for...