Franco Wakes Up in the Hospital As His Heart Rate Spikes 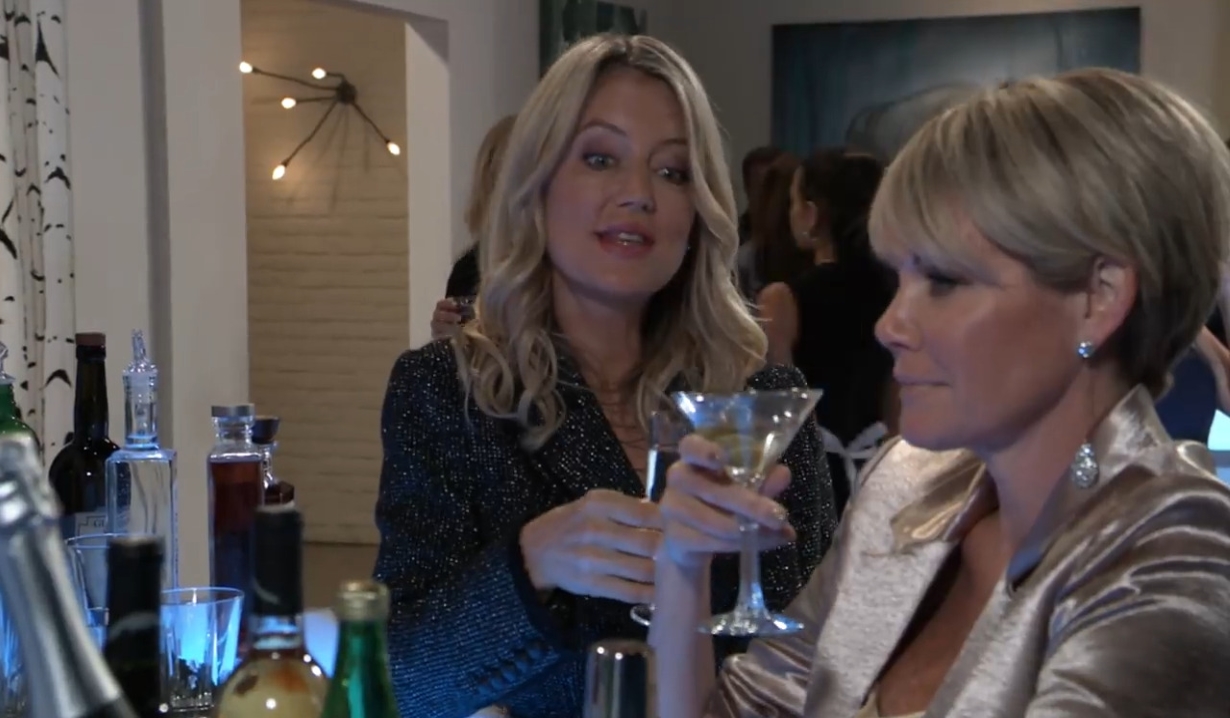 Ava is welcoming guests to an opening at the Jerome Gallery. Trina says everyone who is anyone is there. Ava is sure it will be a lucrative evening and is looking forward to what happens when Helena’s portrait goes up for auction. Curtis, Laura, and Jax arrive. Jasper gets a text and exits. Curtis assures Laura that no one is leaving with the portrait other than her. 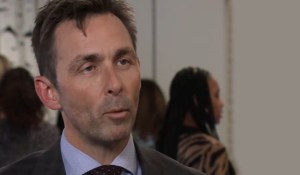 She’s not so sure after she spots Valentin. Pooling around the painting, Laura tells Valentin they need to talk about Charlotte. He’s baffled when she asks him about the bodyguard and insists there isn’t one. She believes him and explains that Charlotte is convinced she has a secret bodyguard. Meanwhile, Jax goes down to the art warehouse, unhappy that Nikolas is there instead of in hiding. Nikolas is determined to take the portrait by any means necessary. Jax doesn’t like the sound of this. When he returns to the gallery, Nina and Ava are toasting at the bar. Curtis is not happy to see this. Nina drags him away and he tells her he has proof that Valentin is lying to her about Sasha. He guesses that Liesl was involved and is surprised Nina is not more surprised by this. Back across the room, Laura talks to Trina about Helena and her legacy. A few feet away, Jax and Valentin start bickering. The auction starts and the prices quickly escalate. Nina stops Jax from bidding. She drags him out and warns that he will regret it if he keeps bidding. Laura keeps trying to outbid Valentin. She wins when a waitress bumps into Valentin and knocks down his bidding paddle. The painting bursts into flames. 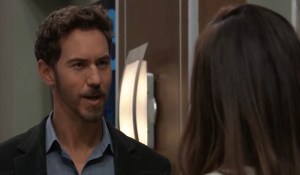 Peter looms around Franco’s room at General Hospital. Andre beckons him in and explains that Franco’s vitals are strong. He thanks Peter for saving his life. Anna peeks in until they come out. Andre tells her how brave her son was and wanders off. Anna wonders if he’s uneasy and is eager to question the man he shot about who sent him. She asks what he was doing there in the first place. He doesn’t know why she’s giving him the third degree. Anna warns that the police are going to dig into it. Down the hall, Cameron joins Liz. They are both eager for Franco to wake up. Andre joins them and says that he’s optimistic about Franco’s recovery. He tells them that Franco signed a DNR order before he went under. The doctor says they just need to be patient until he regains consciousness. He goes to check on Franco and gets an update on the man who tried to kill him. 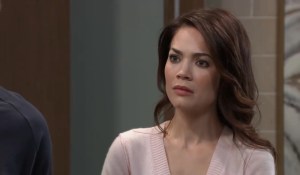 He informs Liz, Peter, and Anna that the gunman is dead and so is any chance of finding out who killed him. Liz and Cam rush into Franco’s room as his heart rate spikes. His eyes flutter. Andre encourages them to talk Franco back into consciousness. His eyes open. 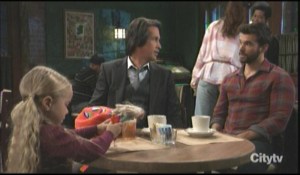 Chase and Willow are at Kelly’s eating. She’s worrying about the Lucas situation and is still upset by everything that Shiloh cost her. Finn and Violet wander in. Seeing Chase fawn over Violet seems to upset Willow and she takes off. As Violet plays, Finn asks Chase about what’s happening with Nelle and Willow. The cop explains that Willow thought she was pregnant and now he’s obsessed with thinking about parenthood. Chase admits he’s not ready to be a father yet, but he’s committed to Willow. He was relieved, but he thinks this has brought back Willow’s feelings for Wiley. Meanwhile, Maxie bumps into Willow outside. They chat about Lucas and James growing up. After rambling, Maxie realizes this is probably uncomfortable for Willow. 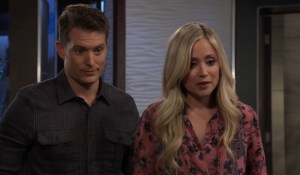 Lulu and Dustin bring her kids to the Metro Court. She tells him he’s a saint for spending the day with her. Charlotte asks Lulu if she’s going to have a sleepover with Dustin. The adults get uncomfortable and hand them cash to buy ice cream. Lulu apologizes to the teacher, but he says it’s natural for her daughter to be curious about them. He asks her if they are getting serious. She looks worried and admits that having sex on the first date has confused things. He points out it’s been three months. They agree to a sleepover.

Lulu and Dustin take the kids down to the launch. As the parents make out, Charlotte and Rocco bicker about her bodyguard and she claims she can prove he’s real. She leaps into the water.

Valentin has a reason to smile.

Franco Remembers Himself and Laura...