Tuesday December 3, 2019: On General Hospital today, Willow takes a pregnancy test, Sonny tries to find out what Jax is hiding, and Kendra dies after the accident. 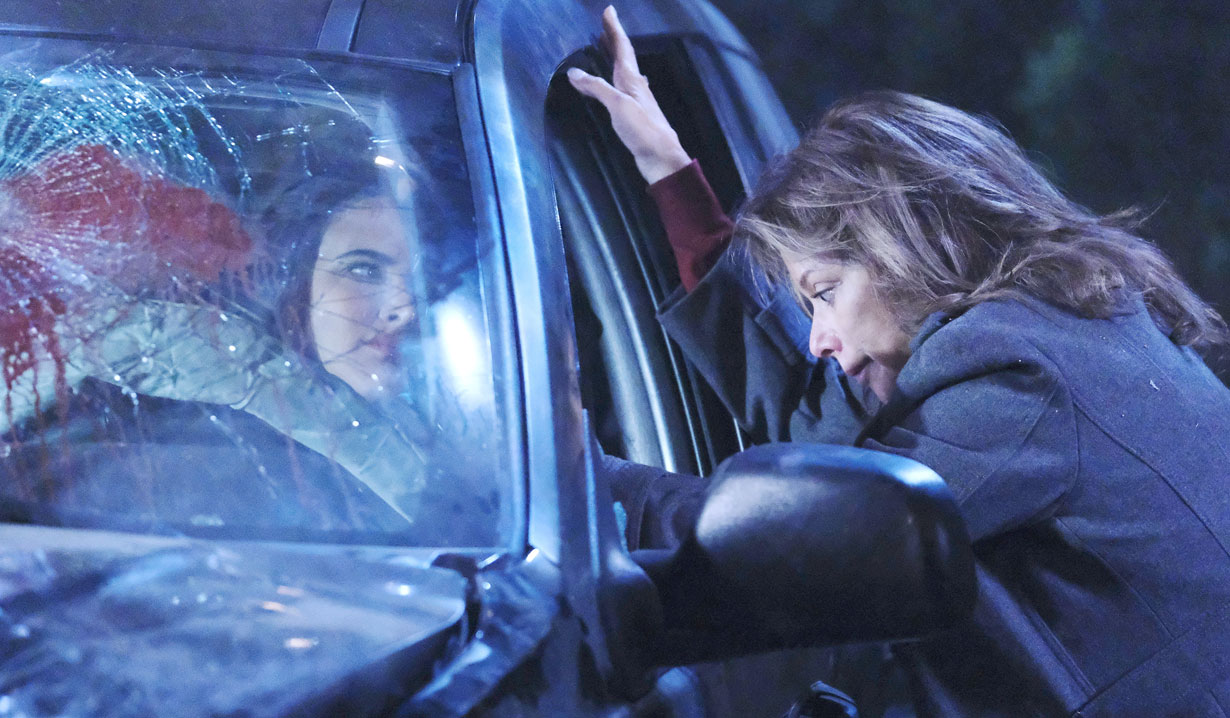 Out on the road, before Kendra can run over Alexis, Lucas crashes into her car. Alexis manages to pull herself up and make her way to Kendra’s car. She finds Kendra slumped against the steering wheel and blood all over the cracked front window. She goes to check for a pulse and Kendra grabs her hand in a tight grip, says this isn’t over and dies. 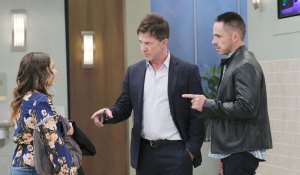 At General Hospital, Kristina approaches Neil and Julian and asks where her mom is and what is going on. Neil tells her that they believe Kendra poisoned Alexis because she’s Kiefer’s sister. They haven’t been able to get Alexis to answer the phone. Julian wonders if Kristina still has the app on her phone that Alexis installed to track her and Molly. Kristina does and they use it to locate where Alexis is. Elsewhere, Willow sits on a bench reading a pamphlet about pregnancy. Chase arrives with a turkey sandwich, and she hugs him. 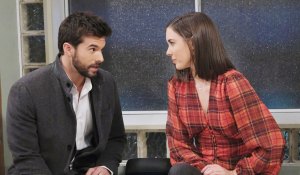 Chase gushes about Violet, and believes he is going to be a pushover as a dad, which is why he likes being an uncle way more. Chase gets a call about the accident and departs. Willow calls Sasha and asks her to buy a pregnancy test because she’s to chicken to buy one. Later, Sasha arrives and Willow admits she’s afraid of what it means if she’s pregnant, but at the same time will be disappointed if she’s not. Willow also knows if she’s pregnant that this time she’ll get to keep her baby. Sasha hands her the test and tells her there is only one way to know.

At Jordan and Curtis’ place, she and Curtis celebrate their anniversary in bed. He gives her a copy of their vows as a gift because paper is the traditional first anniversary gift. Their celebration is cut short when Jordan gets the news of the accident. 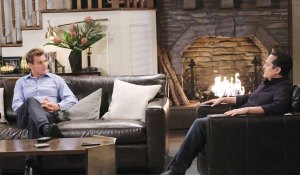 Jax drops by Sonny and Carly’s place to wish Joss a happy Thanksgiving. Carly says she and Dev just went to Cam’s. Carly offers him some pie and leaves to get him a slice. Sonny tells Jax he doesn’t have to keep pretending with him because Carly told him everything. Jax wonders what he thinks he knows. Sonny knows he has a houseguest and asks what her name is. Carly returns and explains she told Sonny about the woman he’s seeing. Sonny still can’t understand how he’d let a woman keep him from Joss. Jax is saved by a phone call. Sonny learns from Kristina about the trouble Alexis is in, so he leaves to be with her. Once gone, Carly tells Jax that if Sonny finds out about Nikolas then he will expose him and likely get Jax deported again, ripping Joss’ family apart. 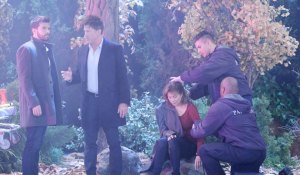 Julian and Neil arrive at the scene of the accident. Alexis is conscious and explains what happened. Neil checks Kendra but can’t find a pulse. Alexis tells them another car hit Kendra before she could run her over. Neil calls for paramedics, and Julian searches for the other car. Chase arrives, and Neil fills him in on everything they know about what happened. Neil wants to get Alexis to the hospital and says they can give their statements later. Nearby, Julian finds Brad out cold in his car along with Lucas. Julian races to find Chase, who is filling Jordan in on what happened, and tells them his son is trapped in the other car. 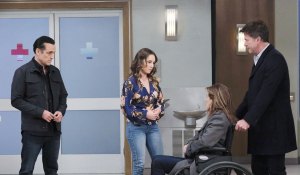 Back at General Hospital, Kristina fills Sonny in on what she knows about Alexis, Kiefer and Kendra. Kristina is worried it’s her fault that Kendra suddenly went after her mom after all these years. She reveals about her oath to Shiloh, a lie that set this in motion. Sonny tells her she is only responsible for her actions, not Kendra’s. Suddenly Neil wheels Alexis in, and Kristina hugs her mother. Alexis tells them what happened, and Kendra is dead. Kristina asks if Kendra mentioned Shiloh, and Alexis admits Shiloh is how Kendra found out, but this is not her fault. Neil and Kristina go with Alexis to get her checked out. Julian arrives and learns from Chase that Lucas is in surgery and Brad is in a trauma room. Lucas’ side of the car sustained most of the damage in the accident. In Alexis’ room, Alexis asks Neil about the car that hit Kendra and if they are okay.

Back at the accident scene, Jordan realizes there are no skid marks on the road from Brad and Lucas’ car.

Bobbie calls someone and tells them to get to the hospital.

Ava receives another visit from Nikolas.

Finn yells at someone to tell him what is going on.

<p>Kendra’s car after being crashed into by Brad and Lucas. Nearby Alexis lays in the road struggling to overcome the drugs Kendra gave her.</p>

<p>Brad’s wrecked car at the scene of the accident after the brakes went out and Lucas crashed into Kendra’s car. Both Brad and Lucas were unconscious and the doors jammed shut.</p>

<p>At General Hospital, Neil and Julian are concerned about Alexis. They tell Kristina about Kendra.</p>

<p>A worried Kristina tries to reach her mother by phone after learning her personal trainer Kendra is Kiefer’s sister. Eventually a tracking app on both of their phones allows Julian and Neil to locate where Alexis is.</p>

<p>Alexis picks herself up off the road and checks on Kendra. She has hit her head on the front window, which is covered with blood. Kendra comes to briefly, grabs Alexis’ hand, and threatens her as she dies.</p>

<p>At the scene of the accident, paramedics check over Alexis while Neil talks with Chase about what happened. </p>

<p>At the scene of the accident, Julian tends to Alexis. He tells her that Kendra is dead and this is over. He is unaware that nearby, Brad and Lucas’ car crashed and they are unconscious.</p>

<p>Jordan and a PCPD cop investigate the crash of Brad and Lucas’ car into Kendra’s.</p>

<p>Neil brings Alexis to the hospital after discovering where she was after the accident. Kristina is happy to see her mother, but blames herself for causing Kendra to go after her.</p> 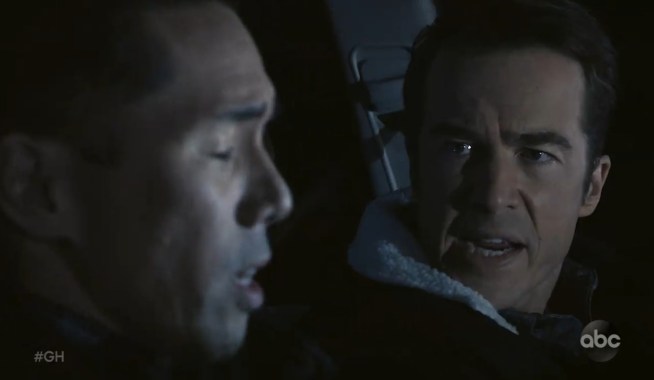 Lucas Learns the Truth About Wiley And Accidentally Runs Over Kendra

Nikolas Tortures Ava with Kiki's Memory for Details on the Painting 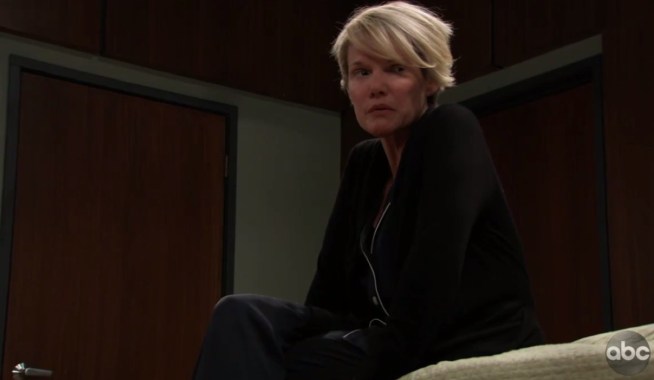