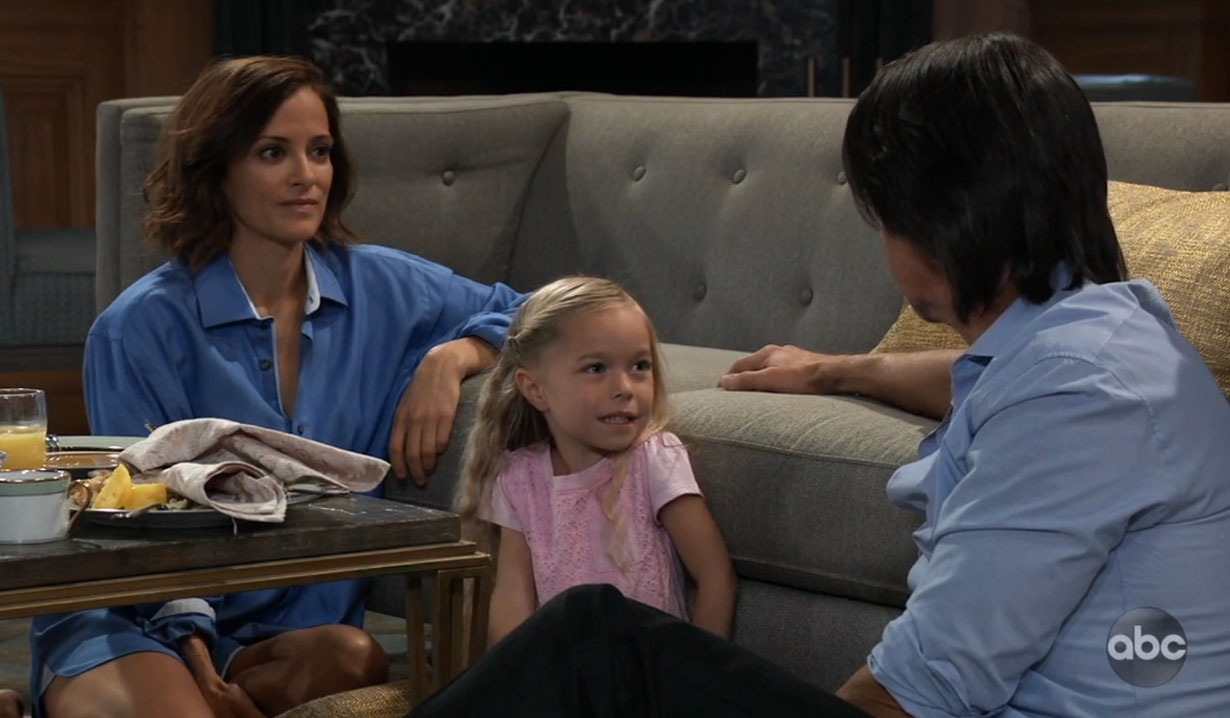 At the station, Anna enters with Charlotte, who runs into her father and mother’s arms. Lulu asks Charlotte why she left the restaurant alone. Charlotte claims she wanted to see if the launch was there so she could go see Butterscotch. 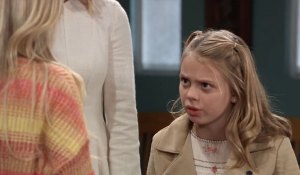 Charlotte apologizes, and Lulu tells her they’ll talk about this when they get home. Charlotte blurts out, “No!” She says it’s Papa’s week and she really wants to see Butterscotch. She hopes her mom isn’t mad. Lulu isn’t, and Charlotte hugs her mother and tells her that she loves her. Nina and Valentin depart with the little girl. Meanwhile, Robert welcomes Anna home and thinks there is something she should know. Robert tells her that Hayden is back, but Anna knows. In the interrogation room, Chase questions the guard who cleared Cassandra for work detail after a large infusion of cash was made into her account. She admits she doesn’t know who it was who asked her to do it. Later, Chase finds Robert trying to tell Anna something and stops him, claiming he needs a word. Anna takes off, and Chase tells him to stop poking holes in Anna and Finn’s relationship. Robert feels now that Finn’s found out he had a child with Hayden that things are different. Chase is stunned because he didn’t know about the girl. 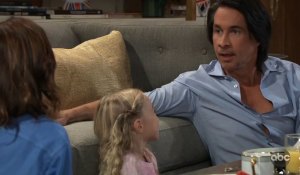 At Anna’s place, Violet comes downstairs and sits between her parents on the sofa for breakfast. After Hayden and Finn explain to Violet that Finn is her daddy. Finn asks Violet if he could give her a hug. She nods, and they embrace. Violet inquires as to where Finn has been. Hayden explains she moved away before Violet was born and he didn’t know about her. Hayden sends Violet off to play, and she and Finn discuss how to co-parent their child. Suddenly Anna enters and finds them on the couch together. 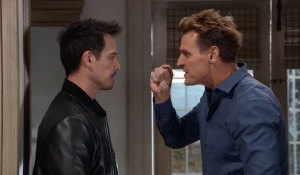 At Jax’s place, Jax is furious with Nikolas for sneaking out again, and hates that Carly has to lie to Sonny and Joss about him. Someone rings the doorbell, so Nikolas hides. Jordan enters to question Jax about the rental of the van that was used to help Cassandra escape. He explains his card was stolen and he reported it, which she knows, but finds odd considering he’s been investigating Cassandra since returning to Port Charles. He asserts his interest was in Valentin and her connection to him. Jordan tells him that Cassandra is dead, and this could turn into a murder investigation. She suggests that if he is hiding anything then now is the time to tell her. Jax has nothing else to say, so Jordan leaves. Jax quickly accuses Nikolas of murdering Cassandra, but he swears he didn’t and suspects it was Valentin, who Cassandra crossed. 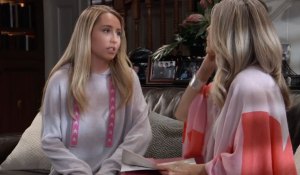 At the Corinthos place, Joss asks her mom about moving in with her father. Carly explains in addition to waiting for her room to be finished, her dad is in a situation and it’s not a good time for her to move in. 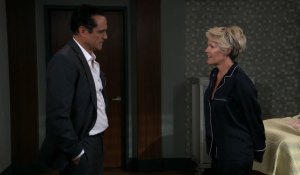 Sonny brings Avery to see Ava at Shadybrook. After spending time with her daughter, Ava admits to Sonny this is a surprise. Sonny tells her it was Laura who talked him into this, and he doesn’t want their daughter to develop a stigma about mental illness. Ava explains why she’s there, that she’s seeing dead people. Sonny urges Ava to get better. Later, Trina drops in to see Ava and apologizes because she can’t open the gallery on Wednesday due to getting into trouble and needs to serve detention. Ava tells Kiki not to worry about it but quickly corrects herself. She insists it’s the medication, which makes things hazy.

Sonny returns home, and Carly asks Sonny to be kinder and more understanding where Jax is concerned, especially in regard to Joss’ living situation. Sonny suspects Jax is in trouble and she knows what is really going on. Carly claims she thinks Jax is seeing someone and he’s not ready for Joss to meet her, which she doesn’t have a problem with. Sonny isn’t convinced.

At Wyndemere, Valentin asks Charlotte why she went with Cassandra. Charlotte admits Cassandra threatened to send Nina to jail. Nina thanks Charlotte for trying to protect her, but she never wants her to put herself in danger for her. The doorbell rings and it’s Lulu and Laura. Lulu was hoping since they missed spending last night together that they could have a snack. Valentin thinks that is a nice idea. Charlotte tells them both to stop because she knows they can’t stand one another. Laura suggests she and Charlotte get a snack so her parents can talk. They all admit they hate one another but agree to do better for Charlotte. Meanwhile, Charlotte tells Laura about the mysterious man she saw, who she didn’t recognize.

Julian visits Alexis in the hospital.

Monica asks Kim to promise her that they’ll have happy lives.

Scott tells Liz they fought for him.

Jason tells “Drew” whatever he chooses, someone who cares about him loses. 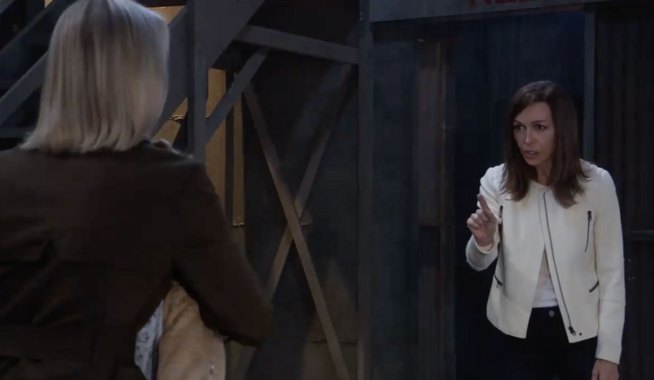 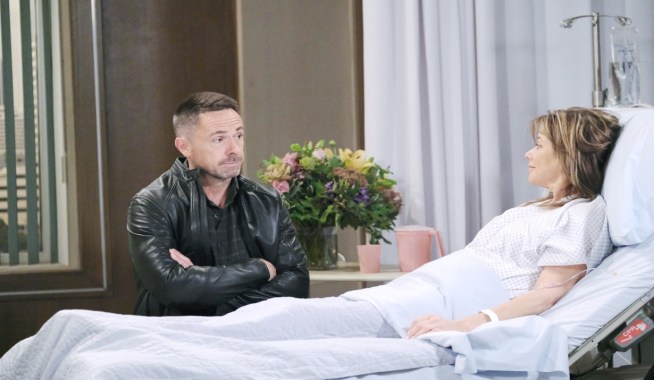