Monday November 11, 2019: On General Hospital today, Jason questions Jax, Julian tries to explain himself to Lucas, and Finn has a tea party with Hayden and their daughter. 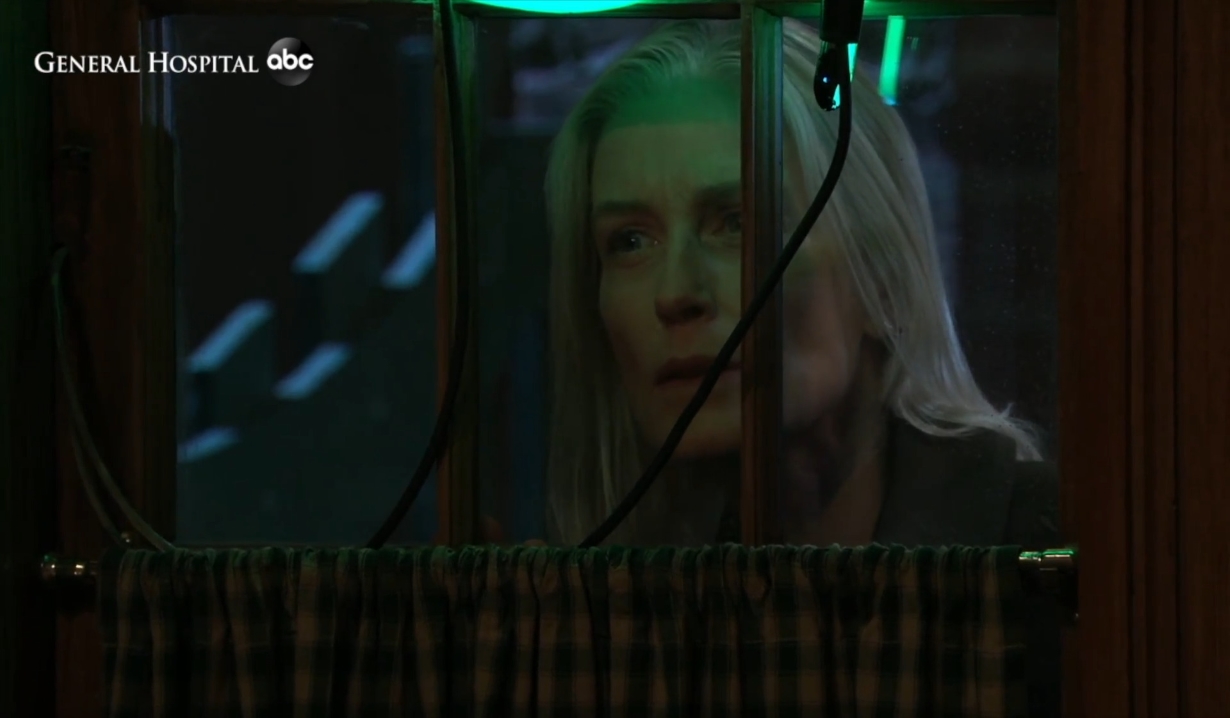 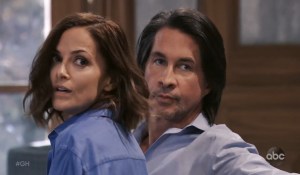 Turkey sandwich in hand, Finn sits on the couch at Anna’s place. Hayden shows up with their daughter. She tells the little girl all about Finn being a doctor. Violet starts dancing around and picks up Anna’s bulldog. They tell her it’s from England, so she wants to have a tea party. As they sip apple juice from china, they talk about Violet’s stuffed animals. After the little girl falls asleep, Finn suggests they put her in the guest room and do the dishes together. 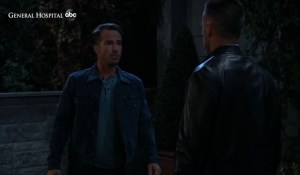 Julian surprises Lucas in the cemetery. Lucas reminds him of their past and declares he doesn’t want anything to do with him. He confronts him about trying to break up his marriage. Julian insists he wasn’t trying to hurt him. Brad is into something shady and he doesn’t want it to blow up on him. Lucas declares that he is done with his father for good and doesn’t want him in Wiley’s life. Julian insists he was just trying to protect Lucas and Wiley. He offers to tell him something that will change his mind. 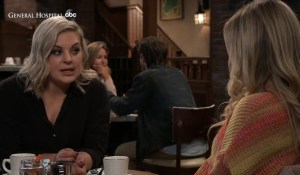 Obrecht corners Brad at Kelly’s. He doesn’t want to talk to her, but she wants to know what he did to cover his tracks. Brad admits that he’s already confessed to Lucas and is hoping things blow over. She threatens to tell Lucas Wiley was stolen unless he fixes this. Across the room, Maxie suggests that she and Lulu set up a couples’ dinner. Lulu notices that Charlotte has gone missing. They search the building but have no luck.

At the Port Charles Police Department, Jordan tells Jason that he needs to stay out of their pursuit of Cassandra. For Sam’s sake, he should stay out of this. He understands, walks out, calls Spinelli to trace a license plate and walks off. Valentin and Nina are shown in by a cop for questioning. They aren’t happy about it. Laura announces that Cassandra has escaped and asks for his help. Jordan joins them and Valentin explains that he and Cassandra broke ties years ago. He and Nina insist they both want to see Cassandra punished and demand to know why she was even allowed to stay in Port Charles. A call comes in for Jordan. Lulu tells her that Charlotte has vanished. They start making calls and Laura hopes that Charlotte just went home on her own. In the corner, Valentin admits to Nina that Cassandra must have taken his daughter as leverage. He’s sure she will contact him soon and asks Nina for her help. 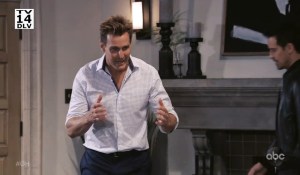 Nikolas sneaks into Jax’s place. Jasper demands to know where he was. Nikolas admits he was helping Cassandra escape and she ran off. Irate, Jax declares he didn’t sign up for this. As they argue over this, Jason starts banging on the door. After Nikolas hides on the terrace, Jax lets Jason in, who tells him about Pierce escaping. He explains that the escape van was rented by someone using the credit card for Jax’s holding company. Jax suggests his account could have been hacked and will take any leads he gets to the cops. Before Jason can leave, he notices muddy footprints. None of this is adding up for Jason and he offers to help him if he needs help. After Jason leaves, Jax starts smashing things and then yells at Nikolas when he re-enters. Jax doesn’t know why he shouldn’t just hand him over to Jason.

The cops show up at Kelly’s and get statements from Lulu, Obrecht and Brad. He vaguely recognizes a photo of Cassandra. Obrecht prays that Charlotte will be okay. She suggests Brad could use some divine intervention of his own. He says Charlotte is just a brat and she’ll be fine. Brad forces her out the back when he sees his husband arriving. As he and Lucas discuss the Charlotte situation, Brad plays it up for pity, and Julian grimaces while watching from the window.

Charlotte and Cassandra are on the pier. The kid is eager to go home. Cassandra is busy turning off the tracking device on her phone. She makes it clear to the kid that she’s taking advantage of her father’s fears for her safety.

Maxie and Lulu arrive at the PCPD and talk to Laura about where Charlotte might be. Nina swans over and starts laying into Lulu, accusing her of upsetting the little girl. While they are distracted, Valentin answers a call from Cassandra. He orders her to let his child go in a public place while he makes the necessary arrangements for her. He joins the others and Laura suggests that he take Nina away.

Back on the pier, Charlotte kicks Cassandra and tries to run off. Cassandra grabs her and then Anna suddenly appears, demanding that Pierce unhand the child.

Carly and Jax strike a deal.

Nina is beside herself.

Nikolas Reveals Himself to Carly, &...