Ava Goes to Rehab After The Shock Over Seeing Nikolas

Friday November 1, 2019: On General Hospital today, Joss and Cameron are caught drinking, Lucas accuses Brad of cheating on him, and Nina has a change of mind. 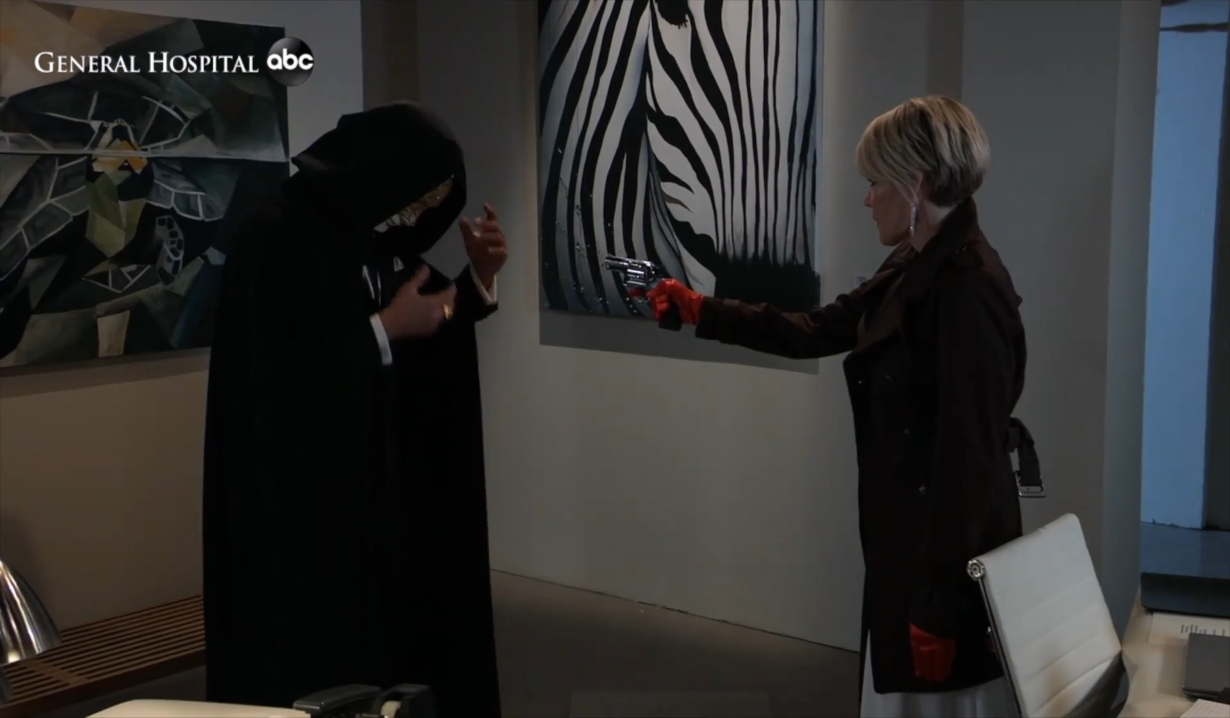 Hayden and Jax are at General Hospital talking about the painting of Helena when Liz joins them. They discuss the kids going to the Halloween party. He calls Laura to tell her they think the painting is at Ava’s gallery. 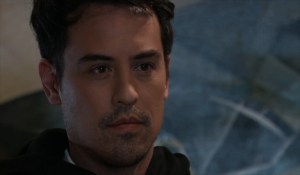 At the Jerome Gallery, Ava pulls a gun on the man stalking her and demands he take off his mask. When he does, she’s shocked to see it’s Nikolas. She faints into his arms. When she wakes up in a chair, he’s vanished.

On the deck of the Haunted Star, drunken Cameron collapses at the feet of Lulu and Dustin. Below deck, Laura warns Valentin he won’t be head of the Cassadine empire for much longer. He repeats that if Spencer wants to threaten him, he will treat him as a threat. Over at the bar, Julian asks the bartender/actor, Kip, if he’s interested in picking up some work.

At the Corinthos compound, Brad and Lucas chat with Carly and Sonny about their kids. Brad ruins the mood by telling them about attending Nelle’s parole hearing. He admits that he has compassion for her, but she deserves to be punished. Brad assures Sonny that he knows where his loyalties lie. Carly gets a call from Lulu, reporting that the kids are drunk. After he takes off, Brad manages to catch Carly alone. He apologizes for visiting Nelle and insists that everything he does if out of love for Lucas and their son. She hopes so but that doesn’t make it right. Later, Sonny returns with the children right after Jax arrives. Jasper and Carly question their daughter about drinking. She starts to explain but then runs off to puke. Sonny and Jax argue about Joss and Dev. 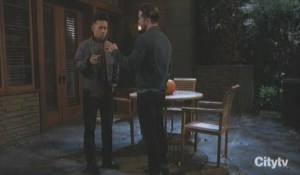 While Carly talks to her daughter in the bathroom, Sonny questions Dev about the evening’s events. Out on the deck, Lucas tells Brad how much he admires him being honest before. When Brad goes in for a coffee, he leaves his phone behind. A text comes in and Lucas checks it. When Brad returns, Lucas shows him the nude photo that just popped up on the phone. Brad insists it’s random, but his husband doesn’t believe it and orders him to admit he’s having an affair. 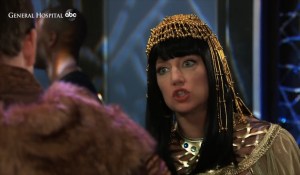 Inside the Haunted Star, Nina rails about Sasha deceiving her. Michael tries standing up for his girlfriend. Willow yelps at Nina to stop. Michael and Sasha walk off and she tells him to stop interfering. He admits that he threatened to take down Valentin if she goes down for fraud. Sasha insists this was her fault and she needs to face the consequences. Meanwhile, Willow tells Chase how much she can’t stand Nina and now doesn’t have to be nice. Valentin takes Nina into a corner and tells her to forget this. 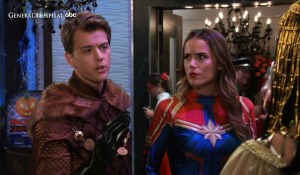 He says that Sasha fooled them, but she’s lost and they should move on. He points out that she and Charlotte may have to testify if this goes to court. Eventually, they cross the room and Nina tells Sasha that she is dropping the charges against her. Nina makes it clear she will never forgive her. Chase and Willow wander over to Julian at the bar and show him a picture of Wiley in costume. Julian complains about how distracted Brad has been. Willow and Chase start to worry about how off Brad has been lately. After they step away, Kip pops up and Julian hands him some cash for sending the photo, telling him to tuck in his shirt. 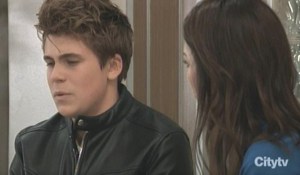 Liz brings her son to the hospital. He wants to lay down. His mom tells him he has to stay there until she’s done her shift. Hayden suggests they hook him up to an IV but Liz doesn’t want to deny him a hangover. He tells her about how hard it is to be normal after everything that happened with Franco. He’s sorry for being stupid. His mom promises they will get through this. As he tries to sleep, Liz tells Hayden that she and Violet can move in with them. 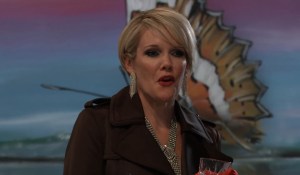 Back at the gallery, Laura drops by and Ava tells her that Nikolas was just there. Laura wishes that were true. Ava checks the surveillance footage but there is no proof that Nikolas was there. She asks Laura if she thinks she’s crazy. Ava insists that someone has been watching her for a month. Laura believes that she believes she saw Nikolas, but she can’t go on like this and needs help. Ava collapses in tears. Laura calls Jax to tell him that Ava thinks Nikolas is alive and he should stay away from the gallery. Then, Laura places a call to Julian.

Julian and Laura take Ava to rehab and give her hugs before an orderly leads her away.

Hayden shows up at Jax’s. He tells her an unexpected complication has occurred. Nikolas appears.

Valentin breathes a sigh of relief.